Tesla’s Cybertruck is an audacious and polarizing gamble

Elon Musk’s ability to show you a prototype, proclaim it Tesla’s next big electric vehicle, and extract thousands of dollars in reservations is unparalleled in the auto industry. The Tesla Cybertruck puts that talent into stark relief, capping an LA Auto Show week with something genuinely jaw-dropping; something which made online spats over whether Ford’s Mustang Mach-E was a “proper” Mustang seem like nitpicking.

We’re used, after all, to seeing concept cars at auto shows. Manufacturers use them as headline-friendly shorthand to tease upcoming design language changes, predominantly; there’s an implicit understanding on both sides of the barrier that what’s under the sheet is to be taken metaphorically, not literally. 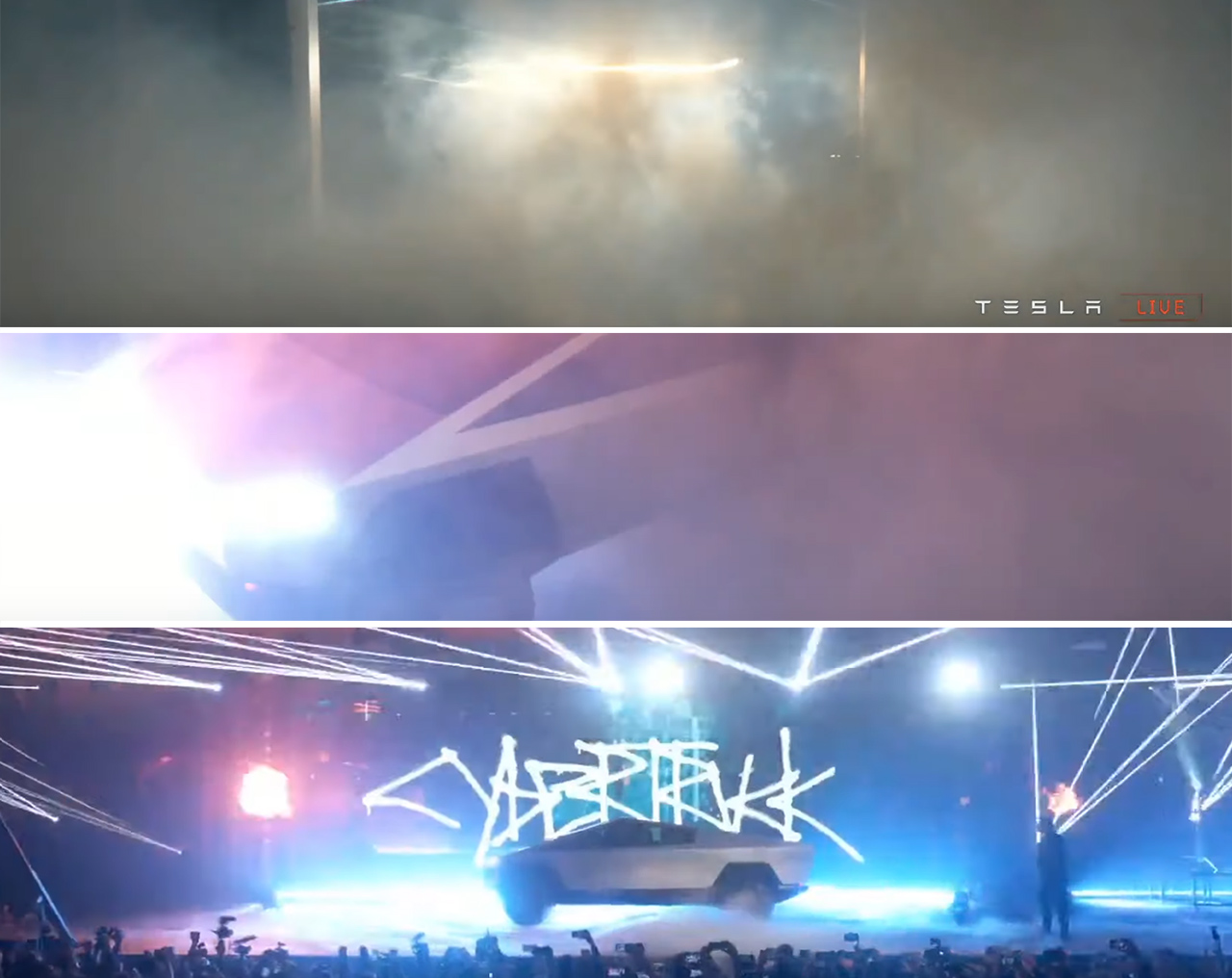 Tesla doesn’t make concept cars, though, not in that sense. The EV that pulled on-stage next to CEO Elon Musk wasn’t billed as an evolving vision of the company’s aesthetic. The Cybertruck is the Cybertruck, and you can reserve your spot in line for one today and spend the next few years imagining picking up the kids from whatever school grade they’ll be in when production finally begins, apparently, late in 2021 or early in 2022.

There’s a lot to like about the Cybertruck. For a start, I do agree with Musk’s opening argument: we can’t expect a transition to electrification to take place without a pickup in the range. America in particular loves its trucks, and while sedans, SUVs, and midsize cars are important, ignoring the form-factor of the perennially best-selling F-150 would be myopic. 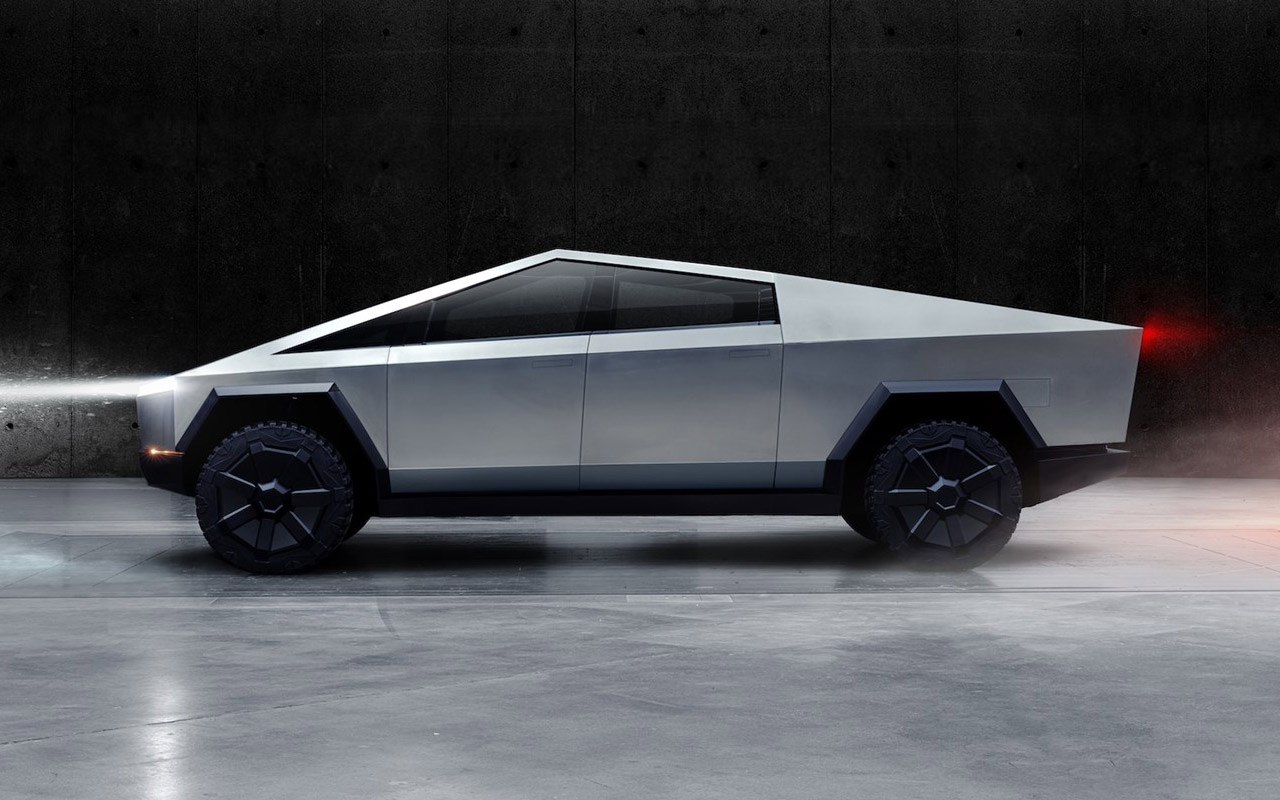 It makes sense for the industry, then, and it makes sense for Tesla. The automaker’s fervent (to put it lightly) fanbase will perhaps be more accommodating to a relatively untapped segment, and quite probably more open to electric trucks than buyers of other brands. That audience’s willingness to put down a deposit years ahead of actual vehicle availability isn’t going to hurt, either, given Tesla could do with the cash today to kickstart Model Y production. Those $100 placeholders quickly add up.

Other automakers could do worse than borrow some of Musk’s ambition when it comes to features, too. Other electric pickup projects have targeted the deep-pocketed truck owner; if Tesla can bring the Cybertruck in anywhere close to the $40k starting price talked about this week, it’ll be a revelation. Offering a single body finish and relying on vinyl wraps for those who want different colors is a neat way of sidestepping the environmental nightmare that is an automotive painting facility.

Having power outlets in the bed to drive tools and other equipment isn’t a new idea, but the Cybertruck’s big DC batteries mean you won’t need to have a gas engine running as a generator, nor the wastefulness of an AC-DC power converter involved. Tapping the same system as handles the suspension for an air compressor is a tiny stroke of genius. I like the various storage nooks and cubbies, too. 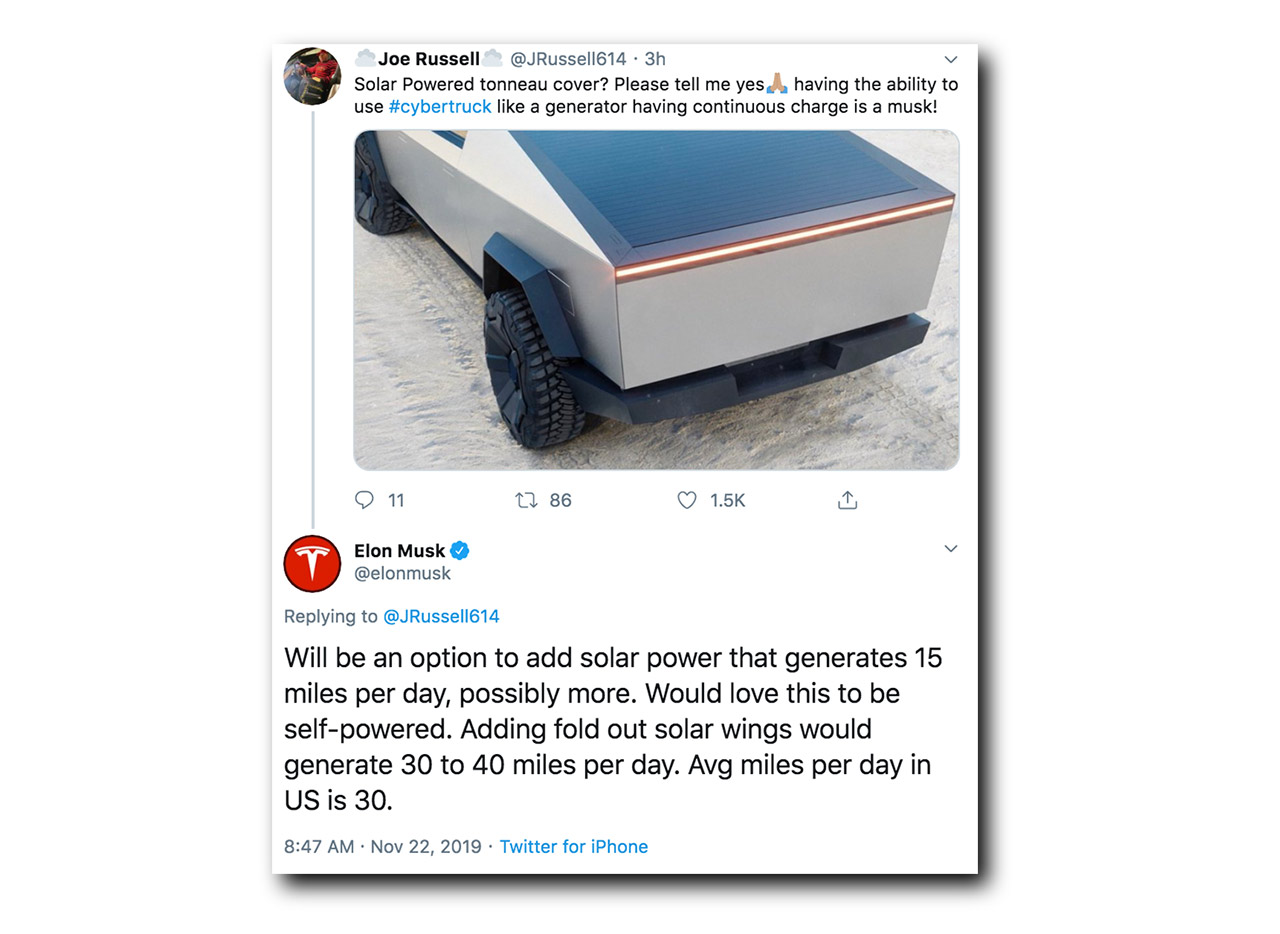 Then there are the more futuristic features. The sliding tonneau cover for the bed, for example, will have a solar option. That, Musk says, could generate enough power for up to fifteen miles of range a day, possibly more. The Cybertruck could even have “fold out solar wings”, he suggested, that could add 30-40 miles in a day. For potential users out on ranches far from a Supercharger, that could be a big deal. 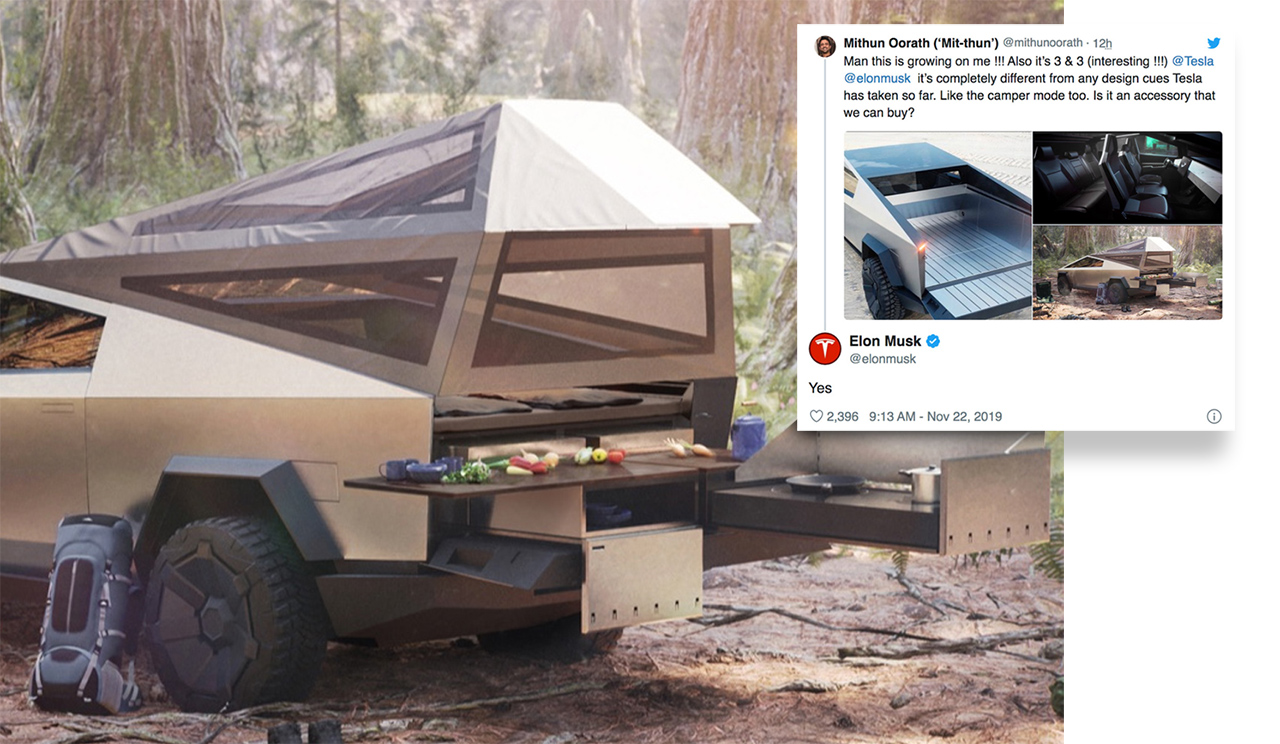 The camper attachment that Tesla showed alongside the Cybertruck will be an official option, too. That apparently adds a pop-up tent to the 6.5 foot bed, as well as a slide-out grill and table. It might look gimmicky at first, but accessories can be big business for utility vehicles. For that same reason, the Cyberquad ATV is probably going to be popular too, particularly when Tesla inevitably starts selling it independently of the truck it docks into.

Combined with what sounds like no shortage of cabin space and a hefty amount of towing capacity, it’s easy to see why Musk & Co. might think they’ve got the truck segment cornered. Not so fast.

Design is subjective, of course. You might look at the wedge-like shape of the Cybertruck and love it, or you might hate it. It’s difficult to imagine what Tesla announced this week on the road, sharing a lane with, well, just about any other vehicle this side of a Pontiac Aztec. Then again, you probably never will.

We’re years out from the Cybertruck’s production kicking off, and there’s a whole host of regulatory-led changes which are undoubtedly going to need to take place before that can happen. Let’s be generous, and say that there’s a reasonable chance of US lawmakers giving the green-light to replacing side mirrors with far smaller cameras by then. We do know agencies like the NHTSA are at least considering it, at the urging of Tesla and other automakers wanting to make their cars more aerodynamically slippery.

The fundamental unfriendliness of a sharp-edged wedge to pedestrians, cyclists, and other road users seems more challenging. Crisp lines look great on concept cars, but the realities of safety regulations for things like crash safety mean they’re invariably tempered by the time they reach dealerships.

Indeed everything Tesla talked about when it came to the Cybertruck’s resilience and safety was about protecting the people and cargo inside. Bulletproof stainless-steel bodywork. Glass that – on-stage smash notwithstanding – should be shatter resistant. That lockable tonneau to keep your kit from prying eyes and hands. 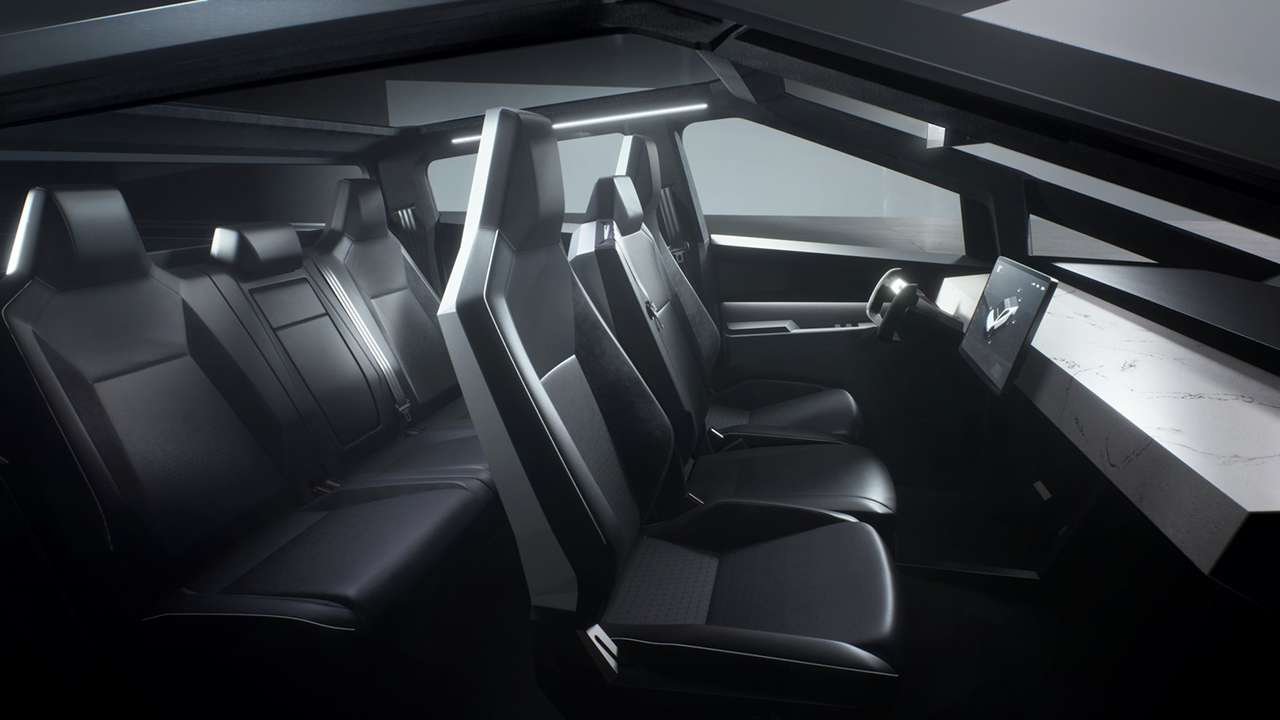 It’s less clear what happens to those outside the pickup. Tesla has, of course, a suite of active safety systems, which include pedestrian auto-braking and such. Even so, accidents still happen, and regardless of whether you check the box for the $7,000 Full Self-Driving package – with no guarantee that it’ll actually be fully self-driving when you take delivery – that’s not a guarantee that you’ll never be involved in a collision.

Production vehicles need to pass safety tests, and demonstrate they’re not only safe for those inside but other vehicles and road users outside. They tend to have bumpers and crumple zones, too, and deformable panels so that pedestrians’ skulls don’t take the complete brunt of a crash. It’s hard to imagine what the Cybertruck will look like with anything as mundane as bumpers and windshield wipers.

The pickup alongside Elon Musk on stage, then, won’t be the same pickup that Tesla eventually sells. Even if it skirts around the full suite of compliance testing by virtue of its final weight, nudging the Cybertruck into Class 3 and excusing it from some of the more stringent requirements, the PR message from that could be a significant challenge.

I don’t dislike the design of the Cybertruck. It was definitely surprising, and audacious, and just like I’d love to own a sci-fi movie prop, the thought of piloting Elon’s wedge of stainless steel through post-apocalyptic streets has a certain charm to it.

I’m not sure it’s the vehicle to bring electrification to the truck masses, however, at least not from what we’ve seen so far. For that we may need to wait for Ford’s electric F-150, or GM’s as-yet-unbranded electric pickup, or more conservative pickup designs from well-funded startups like Rivian. Maybe, indeed, this is the first signs of where Tesla will need to shift, as the EV revolution Musk has so long said he wished for actually starts to come true. 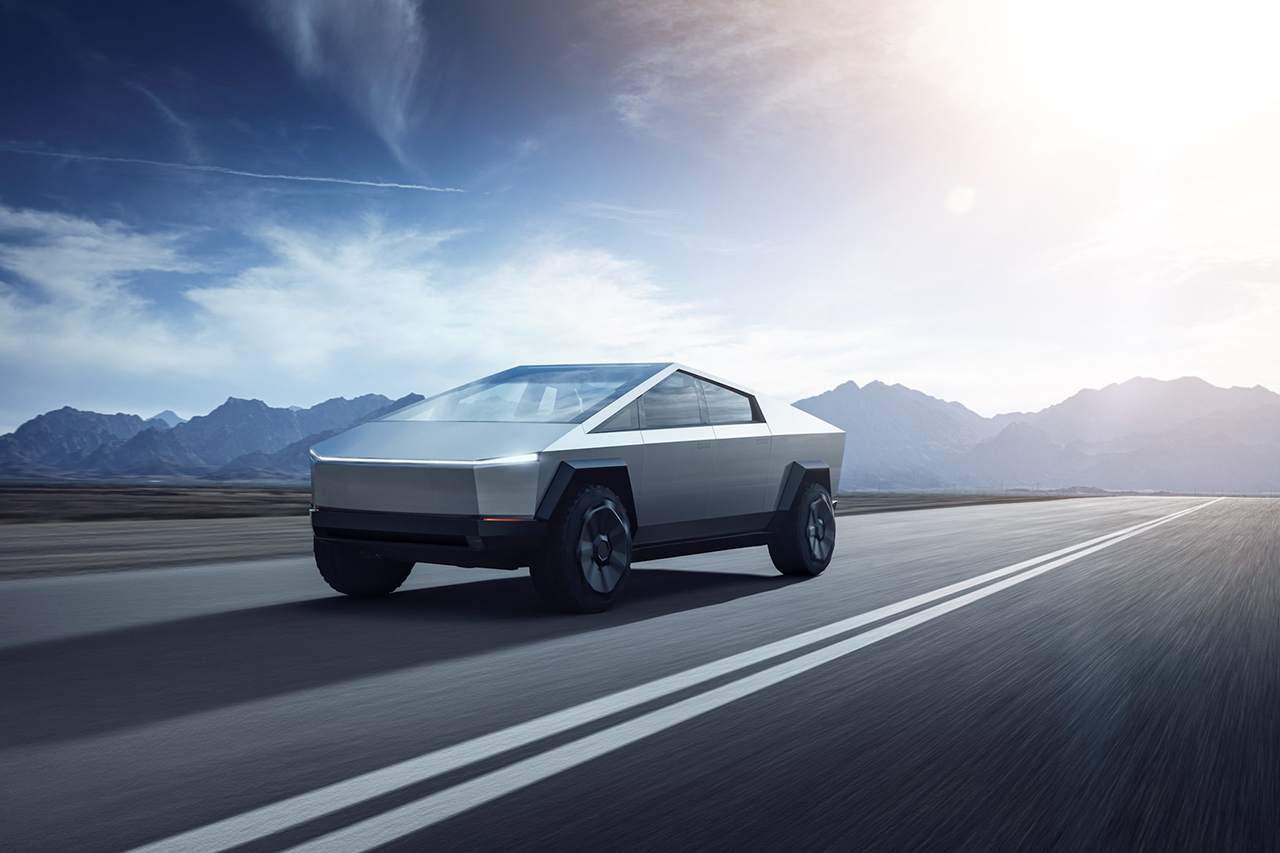 As your rivals start to offer the same core advantages – electric vehicles are fast, are torque-rich, and have other inherent benefits like demanding less maintenance – with the added benefit of an established production and service ecosystem, you have to evolve to keep standing out. It’s taken a while for the traditional automakers to begin offering electric SUVs and sedans, but they’re finally coming down the pipe, and cranking up pressure on cars like the Model X and Model S that those EVs simply didn’t face before.

The Cybertruck, then, made a splash. Between now and those reservations being converted into orders, however, there’s a whole lot of work required to make Musk’s pickup something more than a single controversial prototype. As has so often been the case with Tesla, seeing the automaker make that journey may well be the most fascinating part.