You didn’t think ASUS was going to leave it at a single Republic of Gamers motherboard and a clutch of tablets did you? The company’s computing arm has brought a whole bevy of ROG-branded kit to Computex this week, including everything from video cards, gaming notebooks and desktops, 3D displays and more. Top of the tree is probably the ASUS ROG G53SX Naked Eye 3D gaming notebook, with a glasses-free 3D display paired with Sandy Bridge Core i7 processors and NVIDIA GeForce GTX 560M graphics.

The G53SX can convert 2D content into 3D, and even show 2D and 3D windows on-screen side-by-side, “without compromising brightness, contract or color fidelity” ASUS claims. We’re not sure what that would do to our eyes, but it’s exciting nonetheless. There’s also 2GB of dedicated video memory, a 10,000rpm hybrid hard-drive with SSD partition for reduced boot times, 3DTV Play connectivity, THX and EAX 5.0 3D sound and a stealth-bomber style design.

That styling is shared by other new ASUS gaming notebooks, like the ROG G74Sx 3D, which has the a choice of Core i5 or i7 processors along with GTX 560M GPU, but a regular NVIDIA 3D Vision display demanding active shutter glasses. It has a 17-inch HD display, backlit keyboard and a new thermal design which uses twin fans pulling cool air from the front of the case and twin rear exhausts to expel warm air out the back. 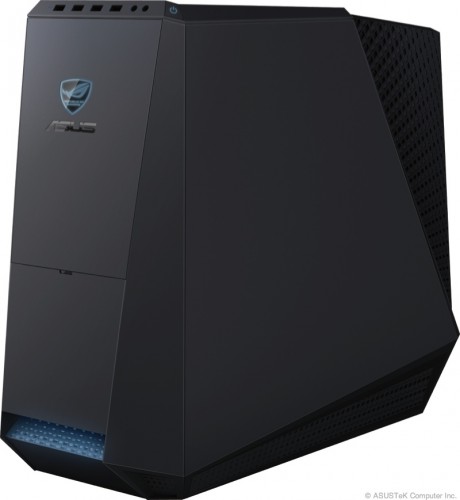 Eventually ASUS will have a video demonstrating the new kit, but at the moment it’s still set to private. No word on pricing or availability of any of the three systems.

“The ROG philosophy is based on the core ideals of class-leading performance, innovative user controls and gamer-focused design,” said ASUS Vice President and GM of Worldwide Sales, Jackie Hsu. The products announced today not only hold true to these ideals, but also introduce a host of new innovations that push high-end PC performance to even greater extremes.

Designed for hardcore gamers who want to be able to play anywhere, the G74Sx gaming notebook uses a second generation Intel® Core™ processor and NVIDIA® GTX 560M graphics for outstanding performance. The ROG G53SX Naked Eye 3D makes lifelike 3D without the need for glasses a reality on a sleek and powerful portable PC. Gamers looking for similar instant action in desktop form are well-served by the new CG8565 Gaming System with a Z68 chipset-based motherboard, stealth fighter-inspired case design and a host of easy-to-use overclocking features.

Also unveiled today are three new ROG motherboards based on the latest Intel® and AMD chipsets that bring new levels of performance for PC builders. The Maximus IV GENE-Z and Maximus IV Extreme-Z both use the new Intel® Z68 chipset to deliver unparalleled gaming and overclocking features, while the Crosshair V Formula is the first AMD 990FX-based motherboard supporting both 3-Way SLI™ and CrossFireX™, and with a graphical UEFI BIOS. Two new NVIDIA® GTX 580-based graphics cards, the MATRIX GTX580 and MARS II, further expand the ROG range.

Recognizing that a successful gaming experience depends on more than just what is inside a PC, ROG now also includes new PC peripherals. The first peripheral in the ROG family is the Vulcan ANC gaming headset with active noise-cancelling technology, which ensures an immersive audio experience, whatever the gaming environment. Combine all the great ROG hardware and attach it to an ASUS VG278H 3D 27-inch display that is designed for gaming, and gamers can become immersed in the latest titles.

Zane Ball, General Manager for Desktops at Intel, said: “We’ve had great success in the gaming market and we appreciate that a vendor like ASUS is devoted to this field. Brands such as ROG demonstrate the best practice for gaming and overclocking PC hardware, and the two new motherboards and one desktop with Intel Z68-based chipsets announced today offer exciting new performance-turning opportunities.”

Over the past five years, ROG products have been recognized by a number of renowned industrial design awards bodies such as iF Design, Red Dot and Good Design and have been well received by power PC users worldwide. Over 1,200 awards from the media are testament to the quality and innovation delivered by ROG and its commitment to delivering total domination in the high-performance PC field. Rest assured that ROG will continue to annihilate records and crush the competition for years to come.

“We are keen to provide the most innovative and powerful solutions for our users, which is why ROG has a team dedicated to researching and developing ideas that go well beyond what you might expect,” said Jackie Hsu.

Please refer to the attached appendices for further details of these new ROG products, or visit the ASUS ROG Computex 2011 Booth at the Nangang Exhibition Hall. Please stop by to see the latest innovations ROG has in store or visit our Computex 2011 website for more information: http://press.asus.com/computex2011/rog/

The G74Sx 3D is a high-performance notebook for gamers who don’t want to drag a full PC around to gaming events, or do not have room at home for a full desktop set up. The G74Sw 3D has the clean, angular lines of a stealth fighter and the power to match, thanks to the latest second generation Intel® Core™ quad-core i5 and i7 processors. NVIDIA® GTX 560M graphics ensure blistering frame rates at native resolutions and high detail settings on the 17-inch Full HD screen, while NVIDIA® 3D Vision offers players a new dimension to games and movies.

Powerful it may be, but the G74Sx 3D always keeps its cool with an innovative thermal design that uses twin fans to draw cool air from the front of the case and twin rear exhausts to expel warm air out the back. The gamer-friendly keyboard brings an extra edge to the playing field, too. The metallic base is does not flex, the backlit keys ensure frags in dimly lit environments and a large cursor key cluster sits away from the main keyboard to minimize mistyped keys in the midst of the action.

* More details will be revealed in early June.

World’s first glasses-free 3D gaming notebook
The ROG G53SX Naked Eye 3D makes lifelike 3D without the need for glasses a reality on a sleek and powerful portable PC. The unique technology works with a whole catalogue of games and multimedia content, even instantly converting existing 2D visuals into glasses-free 3D. Advanced research has also resulted in mixed mode, where one window can display in 2D while another shows in 3D, both on-screen at once. This is achieved without compromising brightness, contract or color fidelity, exceeding the output of older 3D technology that relies on glasses.

These figures are driven by a 2nd generation Intel® Core™ i7 CPU and discrete, DirectX® 11-compatible NVIDIA® GeForce® GTX 560M graphics with a massive 2GB GDDR5 video memory, specs that allow titles such as StarCraft II to run in high resolution with anti-aliasing turned all the way up. Performance is also driven by the inclusion of a solid state hybrid drive that runs at approximate 10,000rpm speeds, cutting down boot time by as much as 52%.

The ROG G53SX Naked Eye 3D ships with a full suite of 3D content creation and editing software, giving users access to advanced authoring tools, including 3DTV Play connectivity. Sound is rendered in THX and EAX 5.0 3D for pristine spatial sound in gaming and other applications, with up to 128 additional sound effects at once compared to traditional gaming notebooks.

In terms of design, the G53SX shares the same ergonomic and stylish look of its stable mates. The 5-degree inclined keyboard promotes comfort during long gaming sessions, aided by rubber-coated palm rests that prevent sweating and wrist fatigue. Oversized twin rear exhausts push heat to keep the machine cool even under load while remaining quiet at all times. Users get a cool and silent environment that makes gaming much more enjoyable.

The Crosshair V Formula with AMD 990FX chipset-based is not only the first ROG motherboard with AM3+ CPU support, but it is also the first ever AMD motherboard to support both 3-Way NVDIA® SLI™ and AMD CrossFireX™ as well as offer UEFI BIOS. The usual selection of advanced ROG overclocking tools are on hand too, while onboard SupremeFX X-Fi 2 delivers the most intense and immersive gaming audio experience. Better still, high-performance Intel® Ethernet with GameFirst technology creates a LAN connection that is fast enough to keep up with the pace of modern multiplayer gaming over an internet connection that is also used being used for other online tasks.

Although both are based on the new Intel® Z68 chipset, the ROG Maximus IV Extreme-Z and ROG Maximus IV GENE-Z offer two different takes on the high-performance motherboard.

The Maximus IV Extreme-Z is the latest model in a long line of ROG motherboards designed from the ground up to be an overclocking enthusiast’s dream come true. The Maximus IV GENE-Z takes the successful ROG motherboard recipe and shrinks it to a microATX form factor that will appeal to speed freaks and case modders alike. Support for both NVIDIA® SLI™ and AMD CrossFireX™ offers the ultimate in flexibility for 3D graphics, but that does not mean the integrated GPU features of the Intel® Z68 chipset are wasted. Full support for the Lucid® Virtu™ graphics virtualization engine means the Maximus IV GENE-Z can seamlessly switch between discrete and integrated graphics on-the-fly as the application demands, while SupremeFX X-Fi 2 audio and Intel® Ethernet with GameFirst ensure a first-class gaming experience.

With its stealth fighter-inspired design, the angular, matte black exterior of the ROG CG8565 Gaming System belies the power that lurks within. Built for gamers who want a ready-made high-end gaming experience, this stunning desktop PC delivers awe-inspiring amounts of power, thanks to the second generation Intel® Core™ i7 processor with Z68 chipset and NVIDIA® GeForce GTX 590 GPU.

Overclocking features form an integral part of this competition-destroying desktop, with a one-touch ‘Level Up’ button built directly into the chassis for an instant real-time speed boost. Exclusive ASUS DIGI+ VRM technology and innovative thermal management ensures that the ROG CG8565 stays cool even when it is pushed to the limit, while the ASUS Xonar sound card provides immersive gaming audio.

The ROG Vulcan ANC Gaming Headset completes the new range of Republic of Gamers accessories. It is perfect for gaming in noisy environments, or just those times when external speakers are not appropriate. The Vulcan ANC Gaming Headset uses active noise cancelling technology specially designed to filter external noise from both its high-quality speakers and boom microphone. The result is crystal-clear sound quality for music, movies, games and even VoIP calls.

Recognizing that a successful gaming experience depends on more than just what is inside a PC; ASUS has also introduced a new range of PC peripherals to enhance that experience with the VG278H 3D display. Designed for gamers who want complete immersion in the latest titles, this 27-inch LED backlit screen has full support for 3D graphics cards via HDMI 1.4 and a built-in infrared emitter for a wire-free desktop.