It might be frivolous in these times of pandemic to be getting excited about weird laptop designs, but the new ASUS ROG Zephyrus Duo 15 could well cut through the cynicism. Unveiled today amid a heady flood of new performance laptops all using Intel’s latest 10th Gen Core H-Series processors, the dual-display notebook isn’t what we’ve come to expect from most gaming machines, and that feels like a good thing.

The first generation ZenBook Pro Duo felt a little like a gimmick. It was hard to tell how serious ASUS was about the secondary touchscreen – pushing the keyboard to the front edge of the notebook – and the company’s claims that it would virtually extend the primary display seemed a little hollow given the fact it was on a totally different plane. 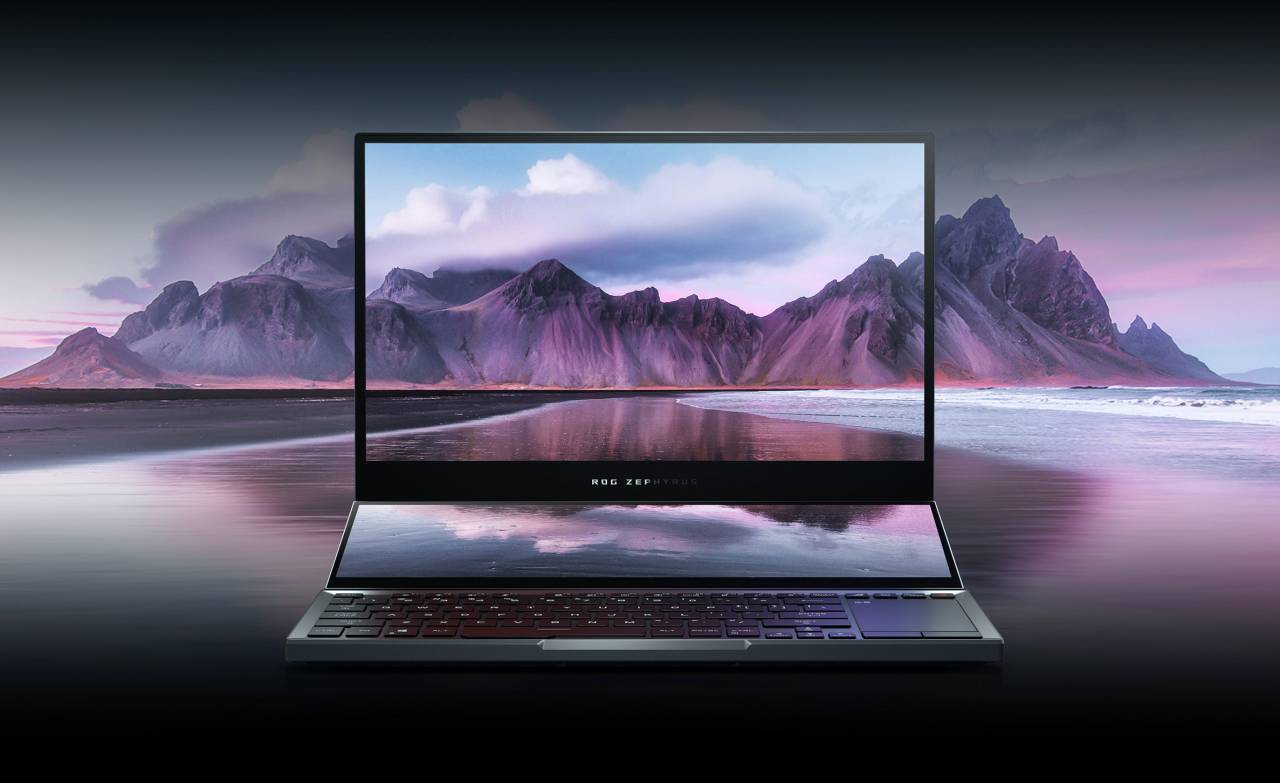 I’m surprised – and pleased – to see that ASUS hasn’t given up, though. The new ROG Zephyrus Duo 15 doesn’t just switch out the old notebook’s CPU and GPU for the latest-and-greatest from Intel and NVIDIA. Instead, it shows ASUS really has been thinking about the form-factor, and how it could be improved.

The secondary touchscreen now tilts up, lifting at an angle. It looks, frankly, like a prop from a James Bond movie. Lower the lid, and it all closes up neatly. I find myself looking down at the Touch Bar on this MacBook Pro and wondering what new uses it could serve, were Apple only to make it a bit bigger.

Nobody is going to say the Zephyrus Duo 15 is a Thin & Light, but at 20.9mm thick and around 5.3 pounds it’s not quite the beefy boy you might expect it to be. For a Republic of Gamers machine it’s fairly restrained, too. Gaming notebooks tend to be all wild case creases, multi-colored lighting, fins, vents, and styling cues that would go down nicely at a mid-2000s’ LAN party. The new Zephyrus flagship does get some color-changing RBG and a silly key font, but it’s not entirely excessive that way. 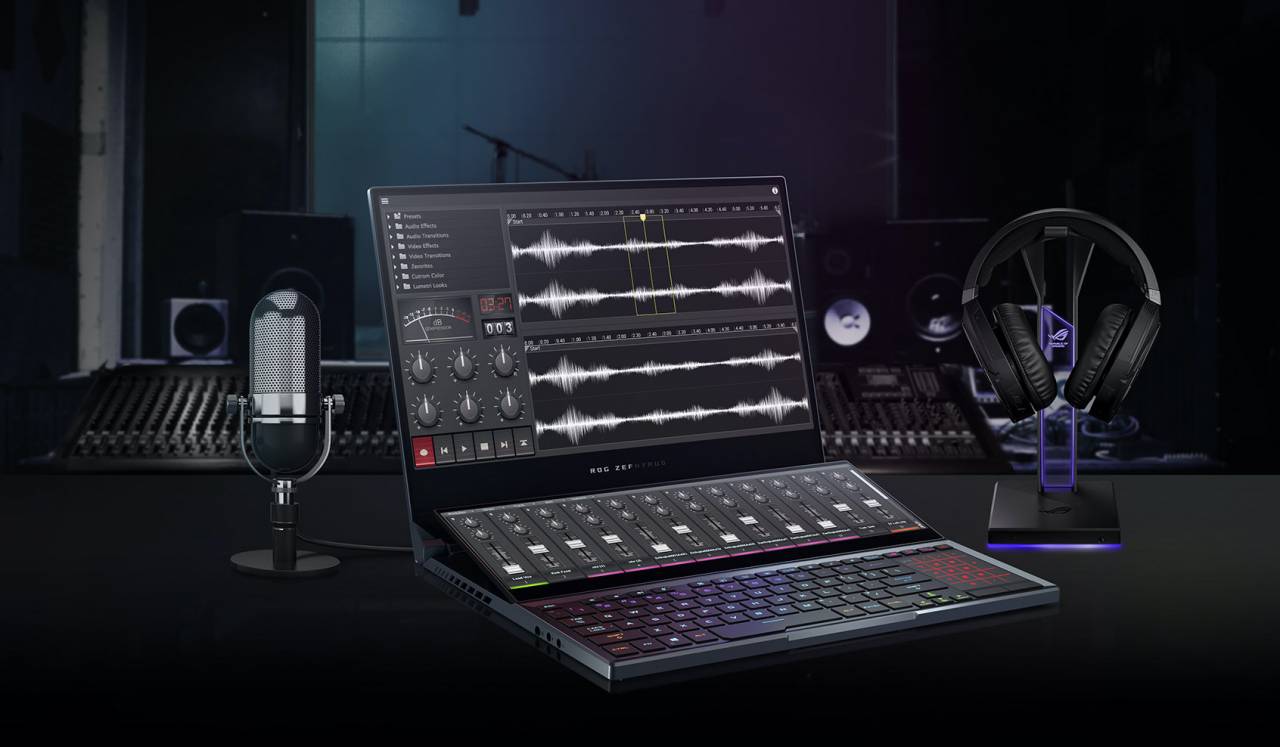 What’s particularly charming about the design of the ROG Zephyrus Duo 15 is that it’s actually surprisingly functional. There’s the ergonomic improvement of having the secondary touchscreen elevated to a more usable angle, based on where you’re sitting, of course. That means less peering down at the keyboard to see the ScreenPad Plus display, and also helps it feel more like an extension of the primary screen.

However ASUS has also taken advantage of the gap that cranked-up touchscreen creates. Lifted, the 13-degree angle leaves a sizable 28.5mm air intake, which the Republic of Gamers designers use to boost the laptop’s cooling.

Considering you can spec out the new Zephyrus Duo 15 with up to Intel’s 10th Gen Core i9 processor and GeForce RTX 2080 SUPER graphics, that extra ventilation is probably very welcome. It’s enough, ASUS says, for 30-percent more airflow into the system. The result should be a potent laptop that’s quieter than you’d expect, or that holds up to higher clock frequencies despite heavy loads.

Whenever there’s a new generation of performance PC hardware, we tend to hear the same big promises. The people want new and unusual form-factors; they want 2-in-1s and two, maybe three screens. Then we see the same old rectangles hit store shelves, and are brought back down to earth. Faster, more potent rectangles, sure, but seldom more interesting. 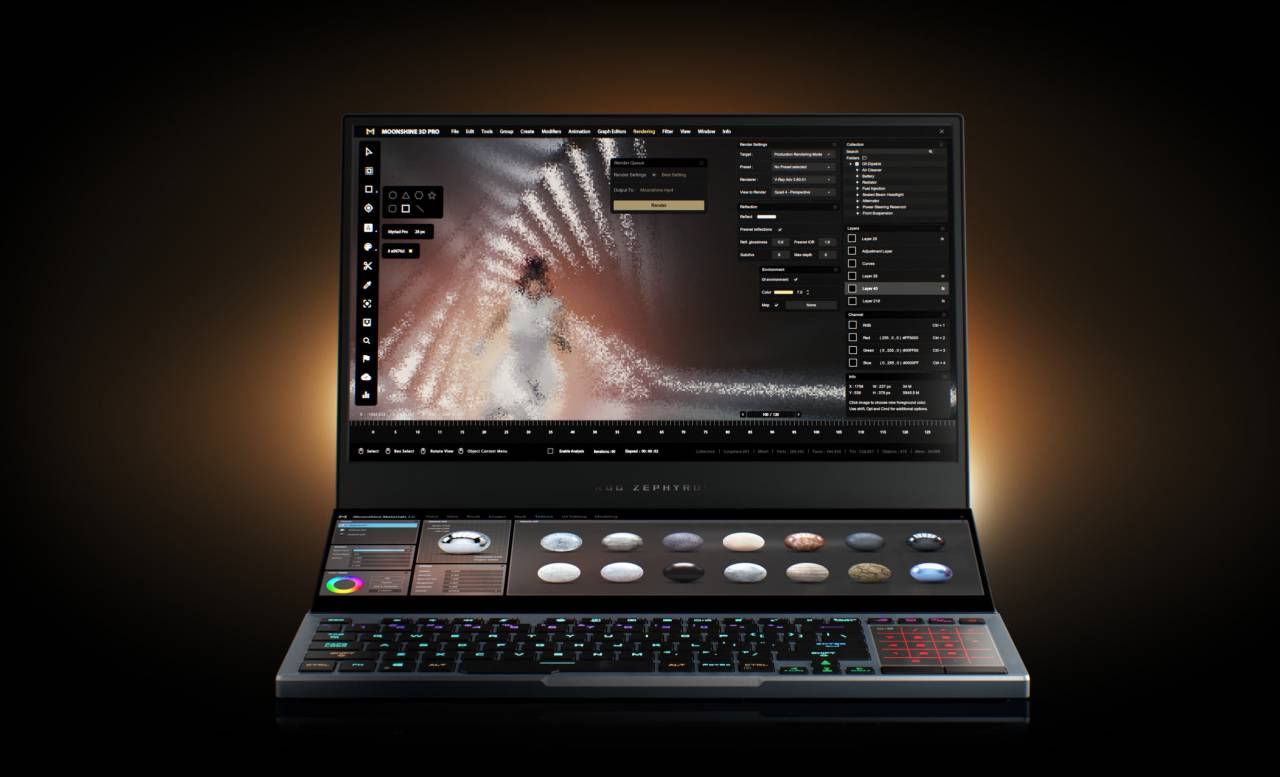 ASUS hasn’t said how much the ROG Zephyrus Duo 15 will cost, though with the ZenBook Pro Duo coming in at around $2,800 for a reasonably-spec’d version, it’s not hard to see this new Republic of Gamers flagship be similarly high-end. Here’s hoping that some of its imagination trickles down to more affordable models in the ROG line-up – and nudges ASUS’ rivals to do some unusual thinking too.