It’s the day performance laptop buyers have been waiting for, and Intel isn’t beating around the bush: the 10th Gen Core Comet Lake-H CPUs are “the world’s fastest mobile processors” the chip-maker says. Latest strike in Intel’s newest generation of silicon, the 10th Gen Core i5, i7, and i9 H-Series processors are set to be found inside a host of gaming and creator-focused notebooks this year.

For 2020, there’s no getting past Intel’s focus on clock speed. The entry-level Core i5 comes in at 4.5GHz; everything from the base Core i7 up will be 5.0GHz or above. “Even our i5 is better than anything else in the industry when it gets to frequency,” Fredrik Hamberger, general manager of premium and gaming laptops at Intel insists. 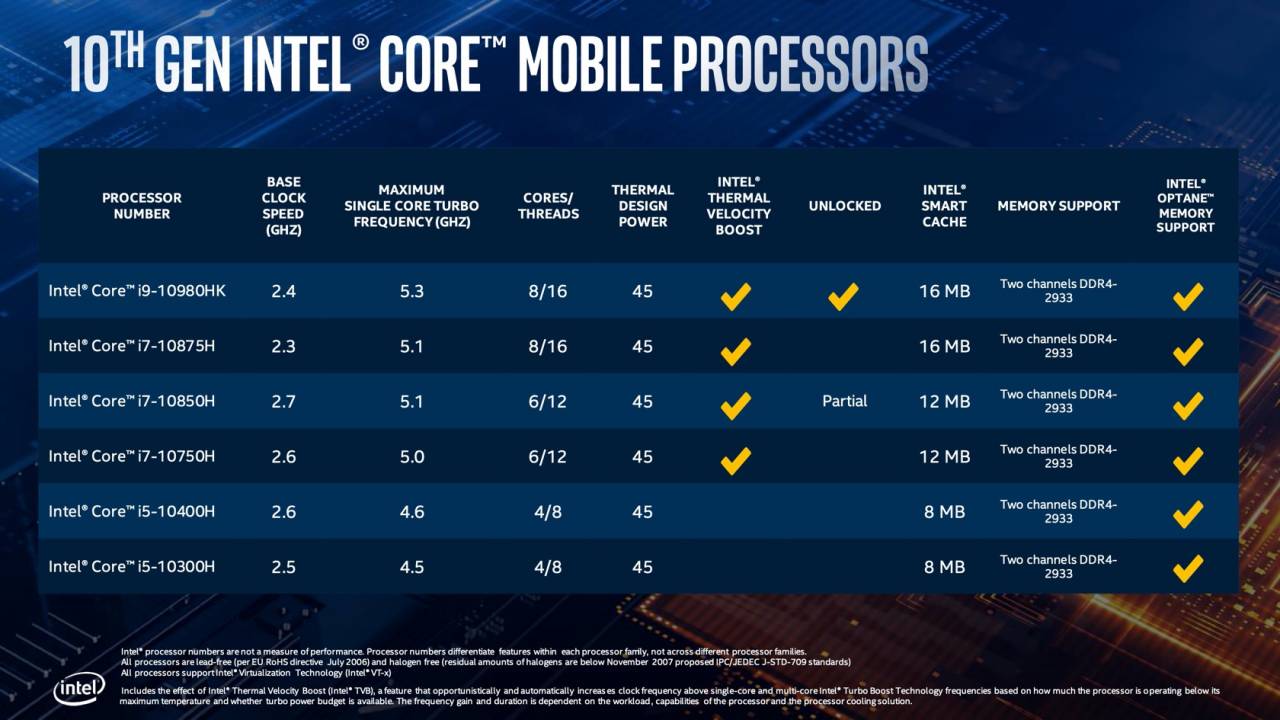 There’ll be six chips at first, topping out with the Core i9-10980HK with eight cores, sixteen threads, and arriving unlocked and ready for overclocking. Compared to the sort of three year old gaming PC Intel envisages people considering an upgrade from, you can expect up to 54-percent more game FPS and up to 44-percent better performance overall. 4K rendering up to twice as fast should keep creators happy, too. 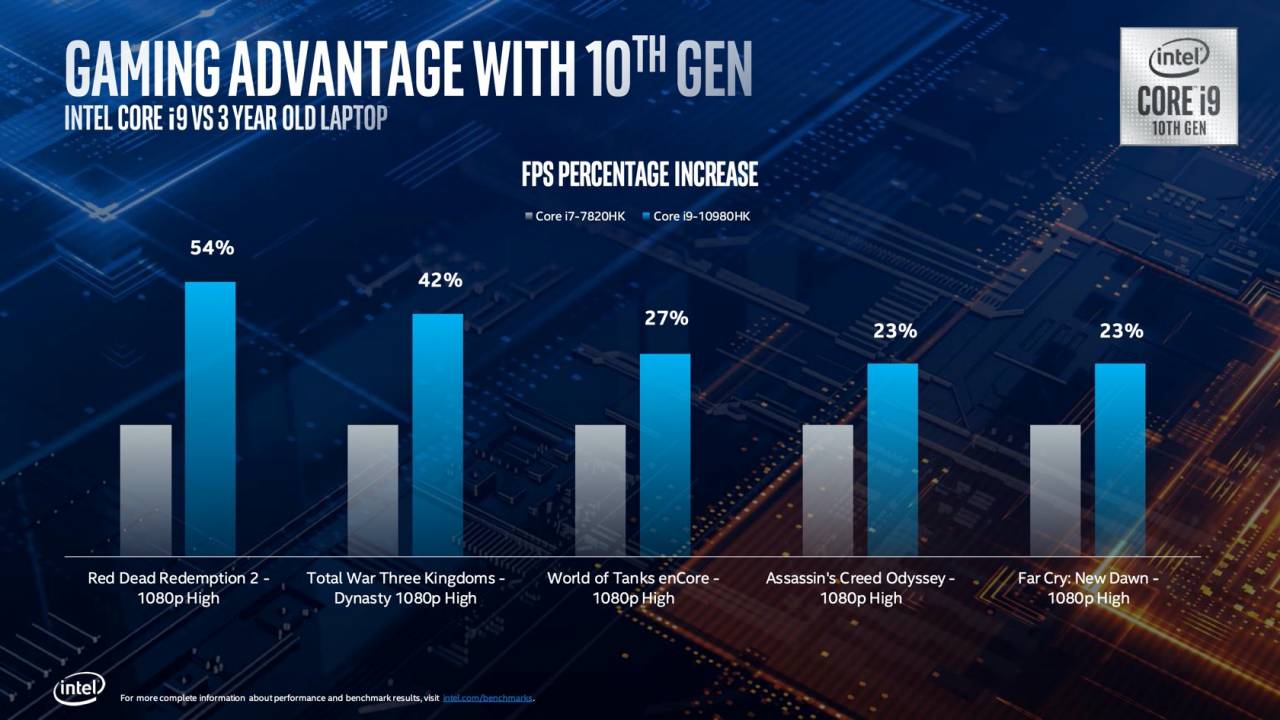 You don’t have to roam all the way up to the top end to see big jumps, mind. The Core i7-10750H may be the entry-level i7 in the new H-Series, but you can still expect up to 44-percent more game FPS versus a compatible three year old PC, up to 33-percent better general performance, and up to 70-percent faster 4K video exports. 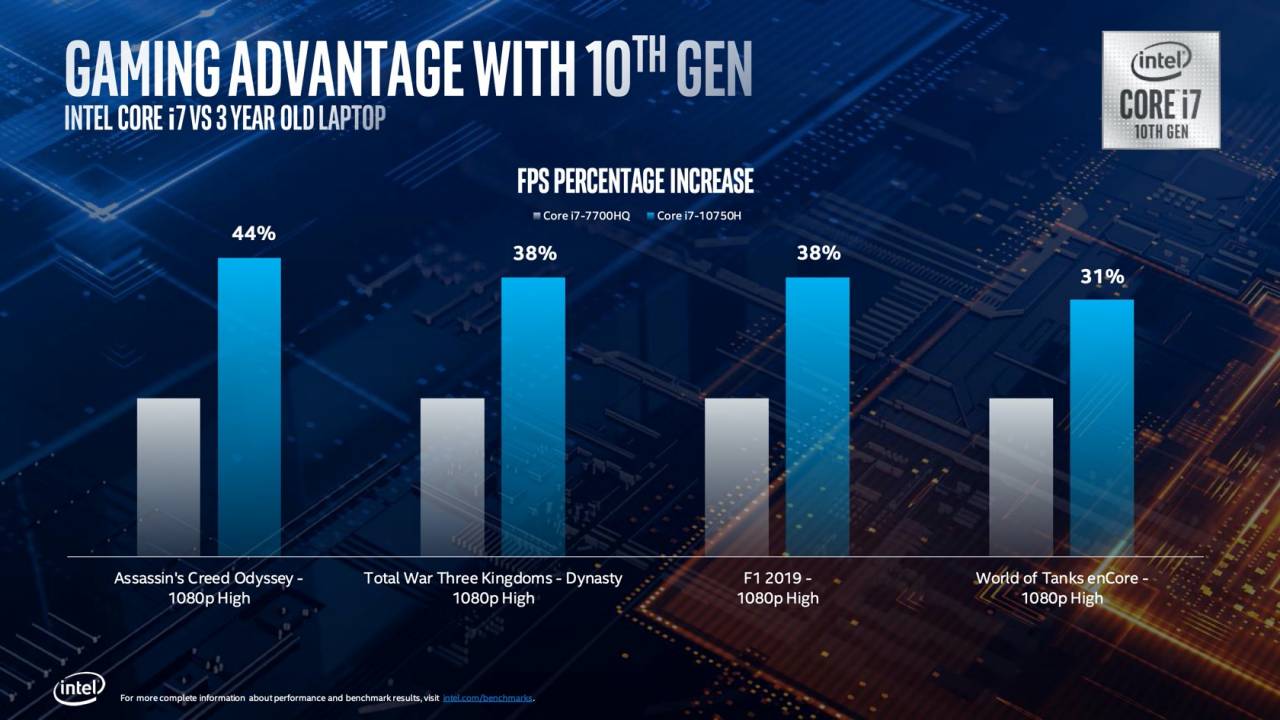 As ever, it’ll be down to individual system-makers to come up with the final specs. Still, Intel has a few areas where it’s expecting 2020’s gaming flagships to stand out. Think slim-bezeled 17-inch displays, HDR 1000 panels, and 300Hz refresh rates, as well as secondary companion displays and more 2-in-1 form factors. Buyers want the form-factor of their old 15-inch laptop, but with a 17-inch screen squeezed inside, and they don’t want something inches thick either.

Cores and speeds are important, then, but there’s more to a successful platform than that. The 10th Gen Core H-Series Mobile processors support up to 128GB of DDR2-2933 memory, along with Intel Optane storage and the latest Intel Turbo Boost 3.0. There’s support for up to 40 platform PCIe lanes – paving the way for CPU-attached storage and more – along with two Thunderbolt 3 controllers for a total of four full-speed ports. 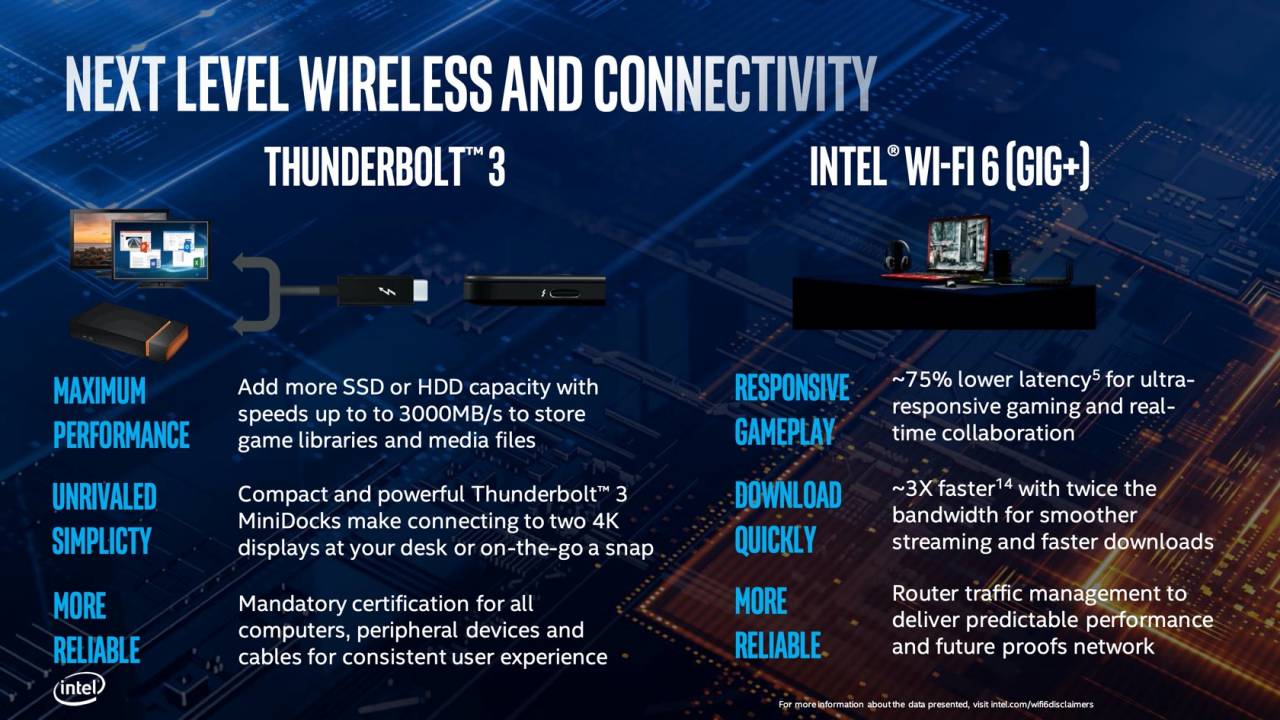 WiFi 6 (Gig+) is supported, with up to 3x the speed and twice the bandwidth of before. As with the previous generation, Comet Lake-H will be a two chip solution, with a separate H470. WiFi 5 ill be integrated, but the WiFi 6 module will be separate – and the CPUs will be compatible with third-party WiFi 6 options too – as will be the Thunderbolt controllers.

Four of the six processors will support Intel Thermal Velocity Boost. That will automatically be running if the temperature is below 65 degrees Fahrenheit. There’ll also be Intel’s new Speed Optimizer, which will do its utmost to push all of the available cores closer to the Turbo frequency, rather than just the primary.

Not just gamers – creators, too

“The key reason that people come in this category and buy is because of gameplay,” Intel’s Hamberger says, though that doesn’t tell the whole story. 50-percent of gaming laptops are bought by people wanting to use them for content creation as well, and a quarter of buyers don’t actually do any gaming at all. That, Intel realized, was an opportunity in itself.

Performance is performance, but the creator audience has somewhat different interests to their gaming brethren. Things like color accuracy rather than frame rates, as well as audio and noise levels in particular. Most gamers usually have a headset on, Hamberger points out, so the sound of screaming system fans isn’t really an issue. Creators, though, aren’t necessarily using a headset.

Maybe the biggest problem with the current breed of gaming notebooks, though, is the aesthetic. One trend Intel says it saw was that creators will do their work on a gaming laptop, relying on its brute-force power, but then move that to another, more slim & light laptop when they were actually seeing a client. The gaming laptop just didn’t look professional enough. 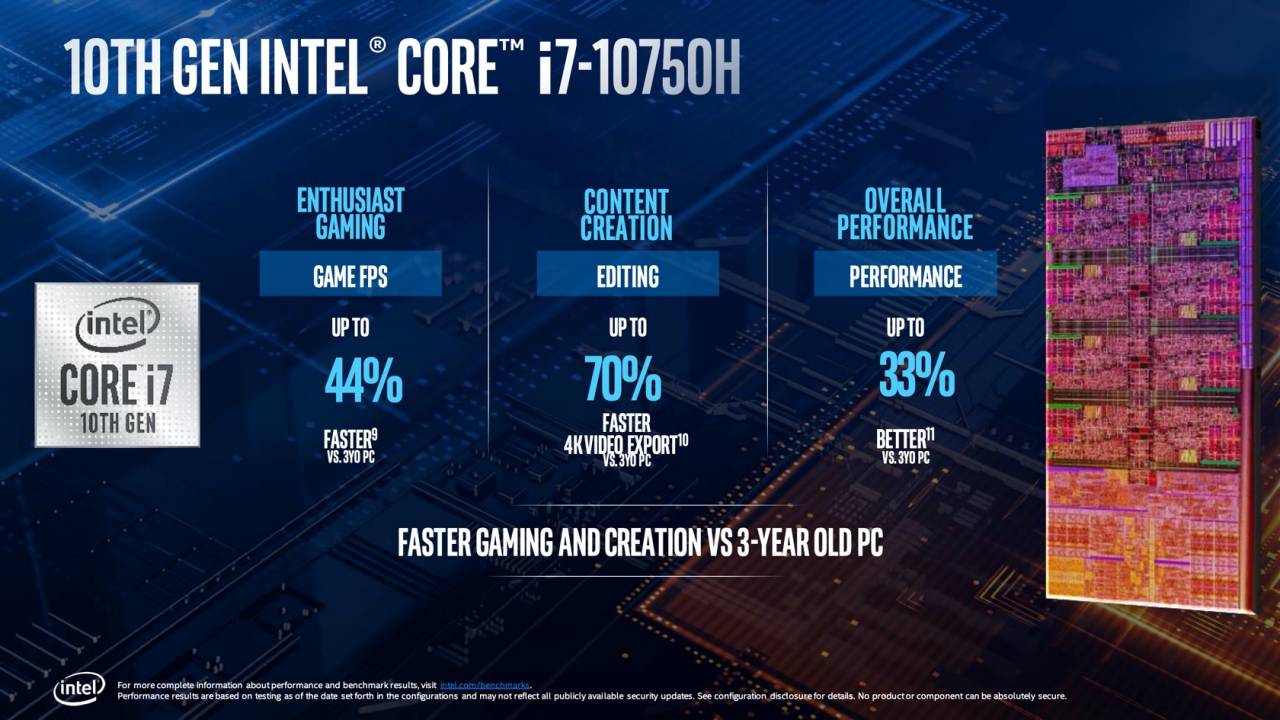 The result is a brand new Core i7-10875H for Creators and Gamers. Like the flagship Core i9 it has eight cores and 16 threads; its clock speed of 2.3GHz and single-core Turbo of 5.1GHz are only slightly less. Yes, it should still be great at games, Intel promises, but it’ll also satisfy for creator-focused apps that need solid multi-threading performance.

The dual Thunderbolt 3 controllers should earn their place there, too. With up to 3,000 MB/s external data speed, Intel is counting on creators needing plenty of external storage but being unwilling to compromise on speed of access. It envisages a new breed of Thunderbolt 3 MiniDocks arising to serve that audience, with dual 4K display support among other things. 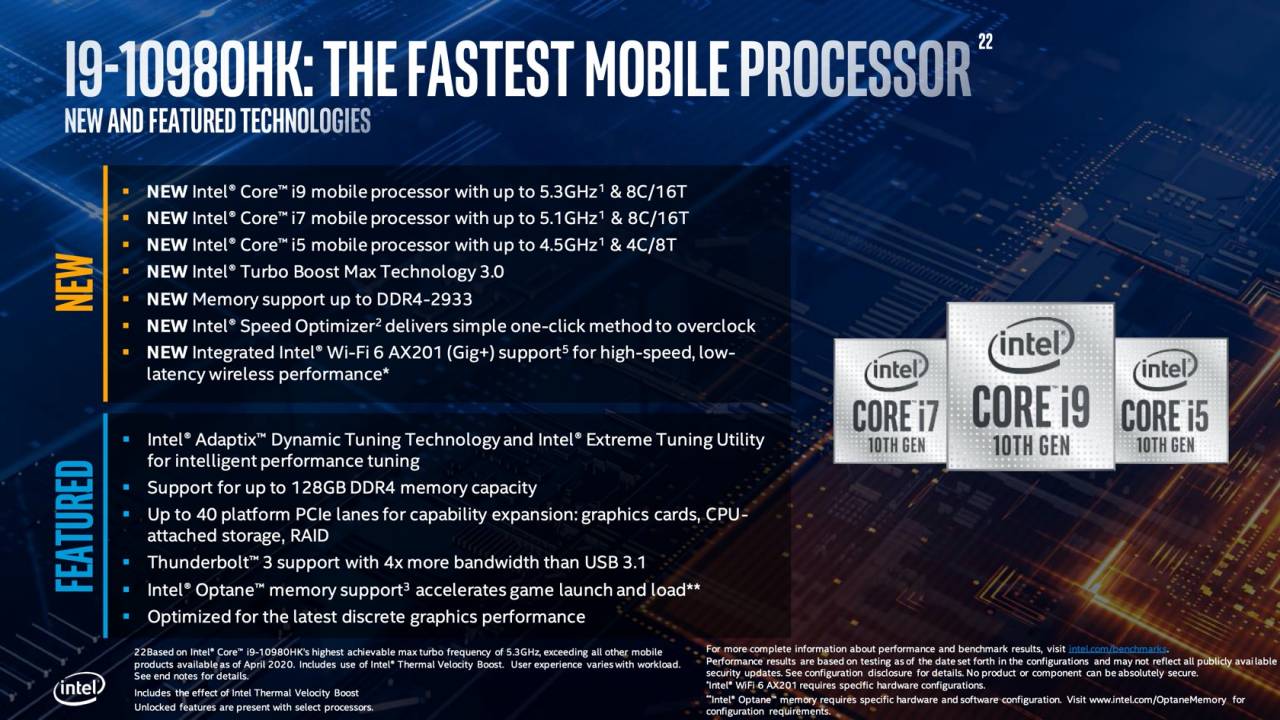 From the sound of it, laptop manufacturers agree. Of the 100+ designs already in the pipeline for Comet Lake-H systems, 30+ of them will be thin & light models. That means clocking in at roughly 20mm or less in thickness.

Some things are familiar

Amid all the newness, Intel hasn’t upturned everything. As before, there’s an emphasis on supporting the latest discrete GPUs: Comet Lake-H will have onboard graphics, but it’s the same Intel UHD as the Gen 9 processors got. “We don’t over-invest,” Hamberger explains, “say, as we do in other categories.”

CPU and H470 chipset bandwidth is unchanged, too, and there won’t be LPDDR4 memory support. There just hasn’t been much interest on a system level for it in this category, Intel says. Similarly, while the Core i7-10850H will be partially-unlocked, only one of the 10th Gen chips will be fully unlocked. That simply reflects the fact that it’s that flagship laptop audience which actually wants overclocking ability, Hamberger says.

We’re not quite saying goodbye to the 9th Gen Core Mobile chips either. They’ll remain on sale alongside this newer generation, hitting more affordable price points.

We’re already seeing the first of the 10th Gen Intel Core H-Series systems being announced today, with all of the usual names getting in early. Preorders are kicking off this week, and the chip-maker expects the bulk of the options to be available across all markets, though individual manufacturers may find themselves affected by the coronavirus situation.