Arcimoto’s three-wheel “Fun Utility Vehicle” may be eye-catching, but the EV startup is aiming to turn even more heads by throwing tilting into the mix. Having acquired Tilting Motor Works earlier this year, Arcimoto announced a collaboration today with Lightning Motorcycles to build what’s promised to be the world’s fastest electric three-wheel tilting motorbike.

That is, admittedly, a niche within a niche within another niche, but it doesn’t mean the end result should be any less impressive. Lightning Motorcycles set a 215.96 mph speed record with its electric bike back in 2011, and the company’s performance technology will form the basis of a new tilting three-wheeler using the TMW TRiO system. 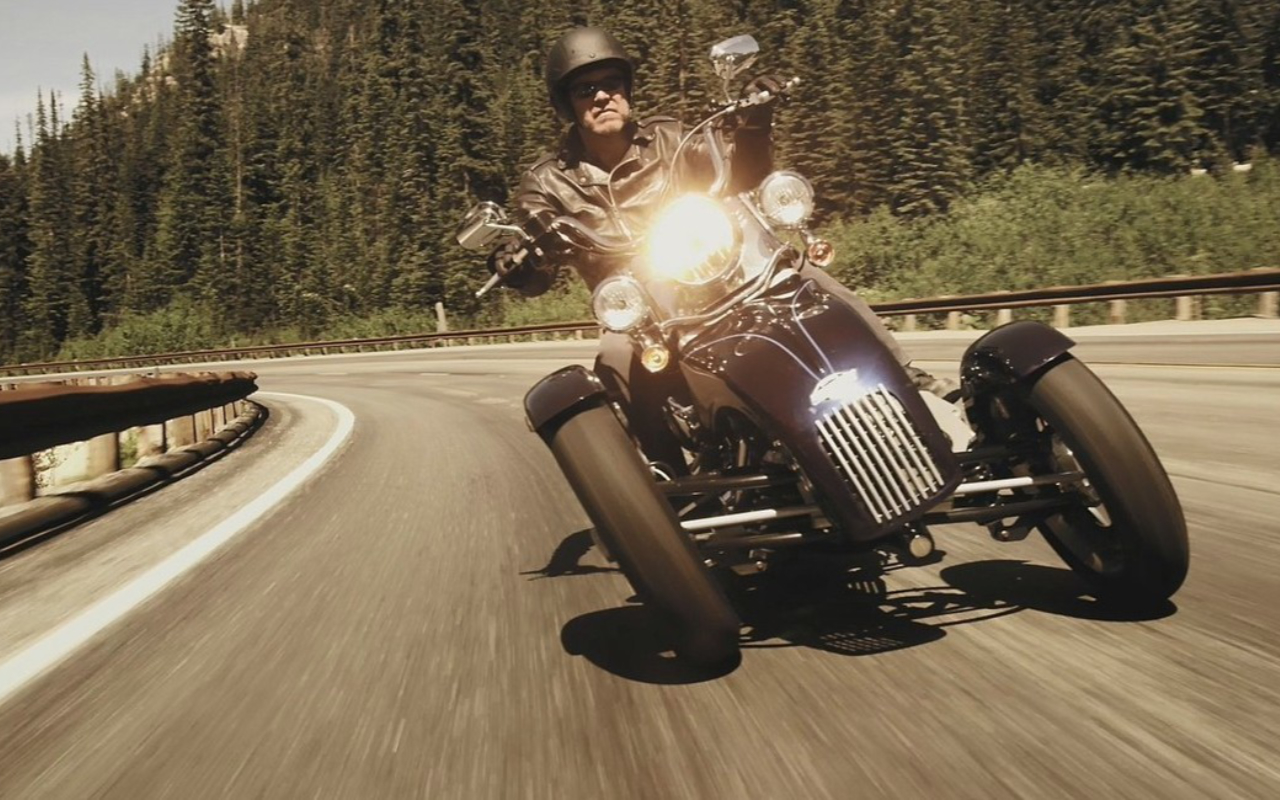 It should be dramatically fast, head-turning to look at, and most of all, Arcimoto CEO Mark Frohnmayer explained to me today, just plain fun. That, after all, is the common thread running through all of Arcimoto’s projects; the challenge now is to show that to more people.

Sales of the FUV are underway in a handful of US states, with the three-wheeler priced from $17,900. Your money gets you two seats, a 75 mph top speed, and up to 100 miles of city range. Half-doors are optional, and drivers will need to supply the self-confidence to be center of attention. 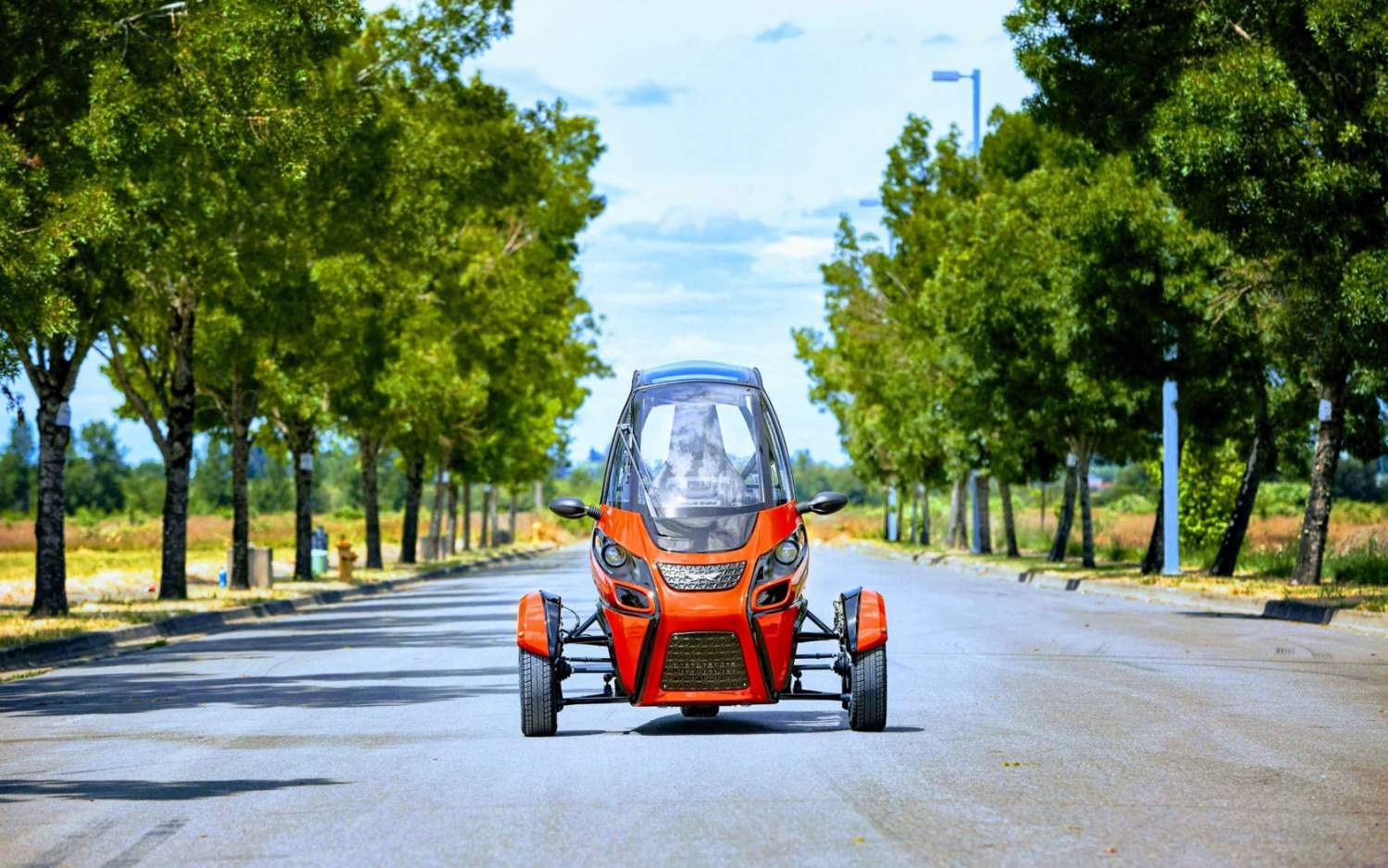 It was that tendency to draw a crowd – and the first question people apparently asked – which prompted Arcimoto’s new push into FUV rentals. “The “where can I rent that?” we got asked over and over again, and that’s what spurred us to go with that model,” Frohnmayer told me.

It also works around the not-inconsiderable sticker price right now, though the Arcimoto chief exec disagrees with my suggestion that it’s an expensive ride. “For some, that is true. For others, who are really looking for a really joyful ride experience, that’s not a lot to pay,” Frohnmayer counters. “Our goal is to get to a very affordable price once we’re at mass production … we want to get to a base model price of $11,900 in 2024, when we’re producing in real volume.”

Factor in cheaper insurance, running costs, servicing, and the rest, and Arcimoto makes a more compelling financial argument. “You start thinking of all the things you do in your car, by yourself, with a limited amount of stuff, and not having very much fun,” Frohnmayer says, suggesting that for many there just won’t be the need for a traditional car. Still, he concedes, early FUV adopters are probably going to have another vehicle to hand, even if he predicts they won’t use it that often.

Indeed a common discovery, he says, is that an FUV can handle the majority of trips, and then short-term rentals like Getaround and Turo can handle the rest. Arcimoto hasn’t inked any deals with providers like that yet for a more comprehensive package – the reassurance of access to a regular SUV a couple of weeks a year, perhaps, and an FUV the rest of the time – though Frohnmayer says he’s “not at all opposed” to it. To begin with, though, the automaker has been focusing on the essentials: a financing partner, making insurance straightforward, and organizing servicing and warranty coverage. 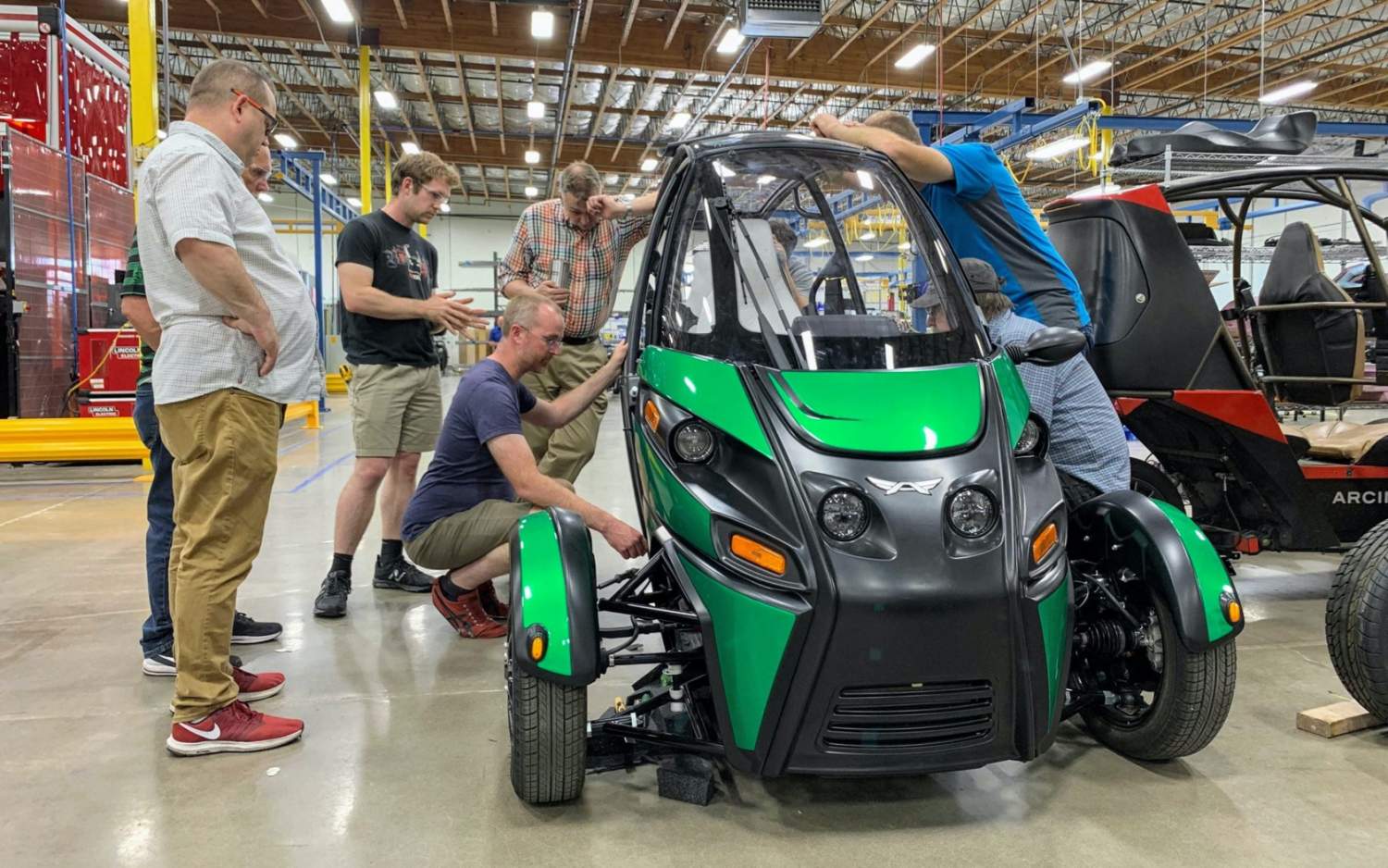 When the range does expand, it’ll be with a whole new model as Arcimoto gets to grips with its newfound tilting technology. What that won’t be is a version of the existing FUV: the dual front electric motors and their half-shafts can’t articulate to the degree that would be required both for leaning and turning, Frohnmayer explains. Instead, the company has something new in mind.

“The reason we bought Tilting Motor Works is that we’re working on a new micro-mobility product using that technology,” he explained to me.” Another order of magnitude of weight and cost reduction, and efficiency improvement, over what we have now. That product is still in development, we haven’t announced any details.”

Frohnmayer wouldn’t be drawn out any further – much to my frustration, as I’m still annoyed I couldn’t buy a Toyota i-ROAD – though he did talk about some of Arcimoto’s broader goals. That includes an even more aggressive price than the short-term target. 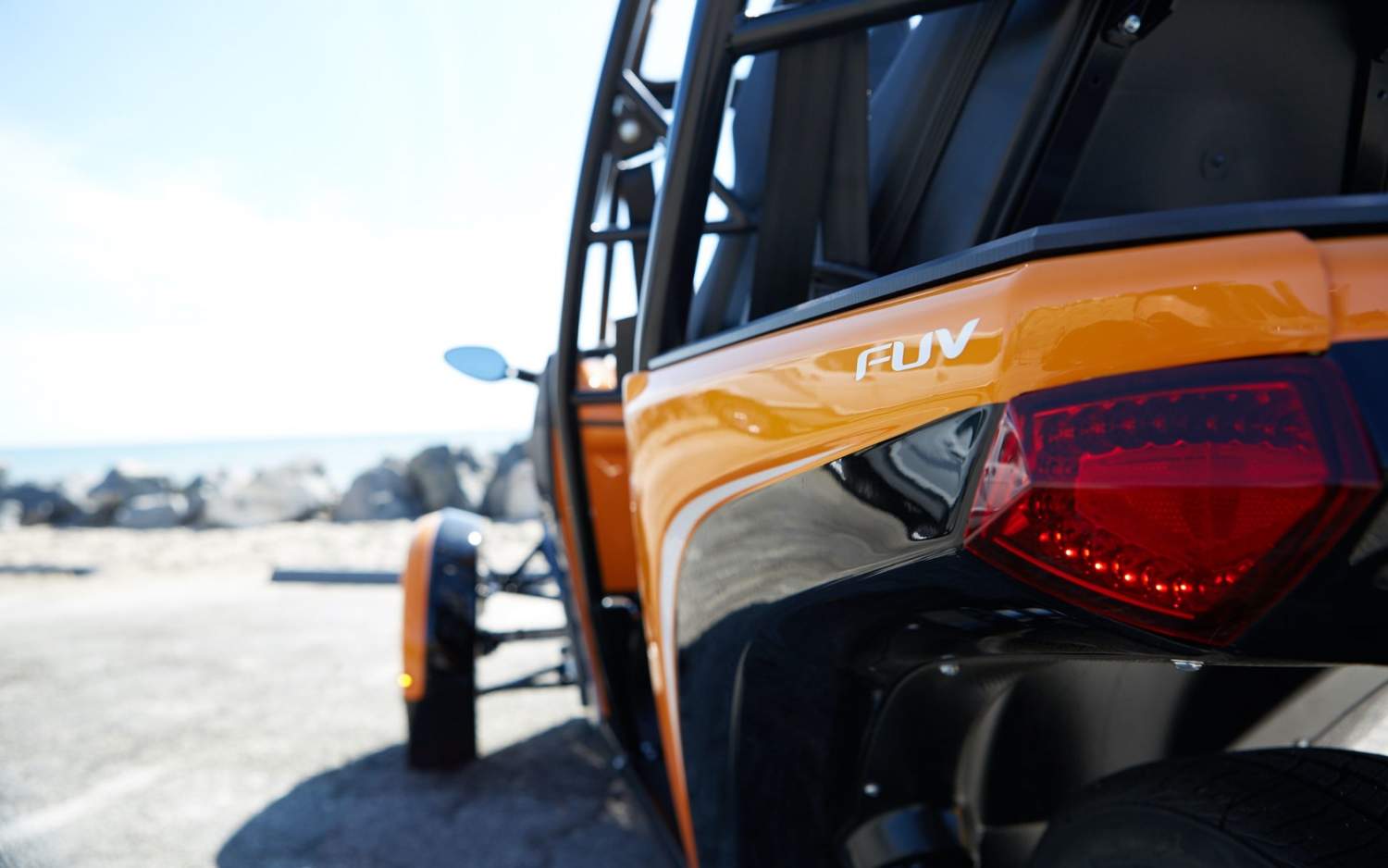 “We’re aiming for – the number we’ve always been aiming for – for the full everyday trip vehicle, our target for that has always been basically a $10,000 base model purchase,” he confirmed. “That’s where we see this mass, mass production opportunity.”

Perhaps what’s most interesting about Arcimoto is something we’ve been seeing elsewhere in the electric vehicle space recently. Not so much an attempt to show that EVs can match what internal combustion vehicles have been doing, but that they can deliver legitimate improvements. Whether it’s Rivian’s super-flexible pop-out camp kitchen, or the F-150 Lightning’s vast and secure front trunk, it’s about leveraging electrification in ways gas-burning transportation can’t deliver. 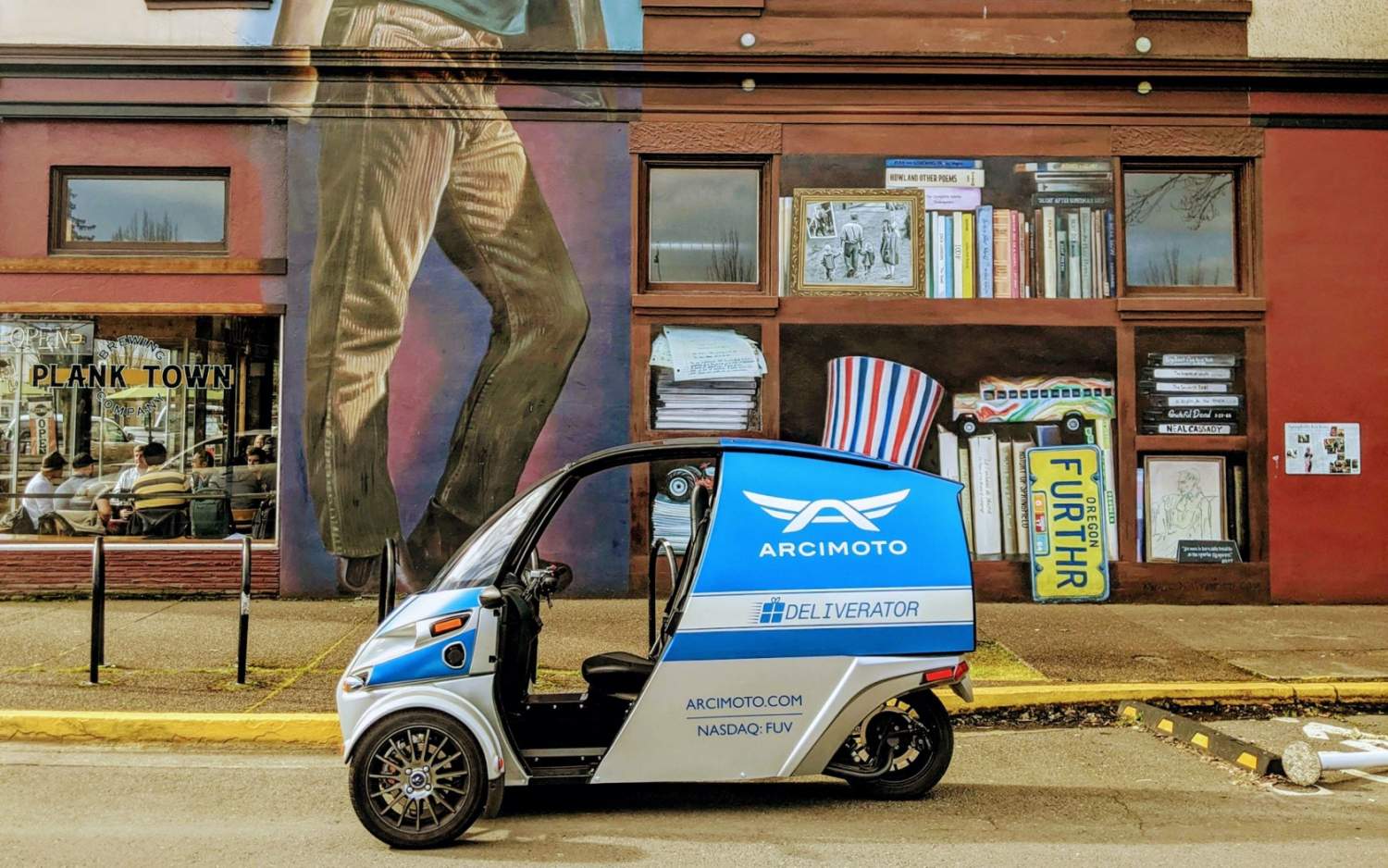 Arcimoto’s FUV may not be for everybody – Frohnmayer says the experience of riding a doorless trike in wet weather “is actually pretty pleasant” with its heated seats and grips, though I’m not sure the winter here in Michigan would necessarily agree – but there’s no denying that EVs are opening the door to transportation realities neglected by traditional vehicles. Like the ElectraMeccanica Solo EV we tried last December, one possibility is in recognizing that for most trips we’re on our own or in pairs at most, driving minimal distances and with a small amount of stuff.

Perhaps trips like that really don’t need a full-sized car, and something smaller, entirely electric, and costing cents to run is more practical. Arcimoto is counting on that being the case, and if it tilts as you drive it, well, maybe that just adds another smile to each mile.