If I was picking a vehicle to go camping in, I think I’d want to take the keys to a Rivian R1T electric pickup. It’s hard not to watch Rivian CEO RJ Scaringe’s walkthrough video of the EV truck’s slide-out camp kitchen and not start imagining great food in the great outdoors.

Rivian has been talking about the camp kitchen option for some time now, though it’s actually a little more complicated than we may have initially given the automaker credit for. It taps what in a traditional, combustion truck would be unusable space: the R1T’s Gear Tunnel.

It’s basically a cargo tube that runs the full width of the electric pickup, with two hatches behind each of the rear cab doors. A regular truck would have mechanical components there for the rear wheels, but Rivian’s rely on a separate electric motor. The resulting space is big enough for some golf bags, a canoe, or of course the camp kitchen add-on.

There’s a 1,440 watt induction cooktop on one side, and a sink on the other with a 4 gallon tank and spray arm. On the reverse, there’s a 30-piece Snow Peak kitchen set in drawers. The whole thing slides out of the cubby on the so-called Gear Tunnel Shuttle and is supported on a fold-down leg; or, you can slide off the modular kitchen units and have that as a bed, or for cargo space instead. It even has a couple of 120V outlets in the middle.

It’s not just the fact that having a huge battery with you and only using it for propulsion seems like a massive waste. We’ve seen other automakers tap into the potential for portable power themselves with their EVs, whether it’s the generator-replacing system on the current F-150 PowerBoost hybrid, or the altogether more comprehensive version set to arrive on Ford’s F-150 Lightning next year. What sets this Rivian approach apart is how elegant it all is. 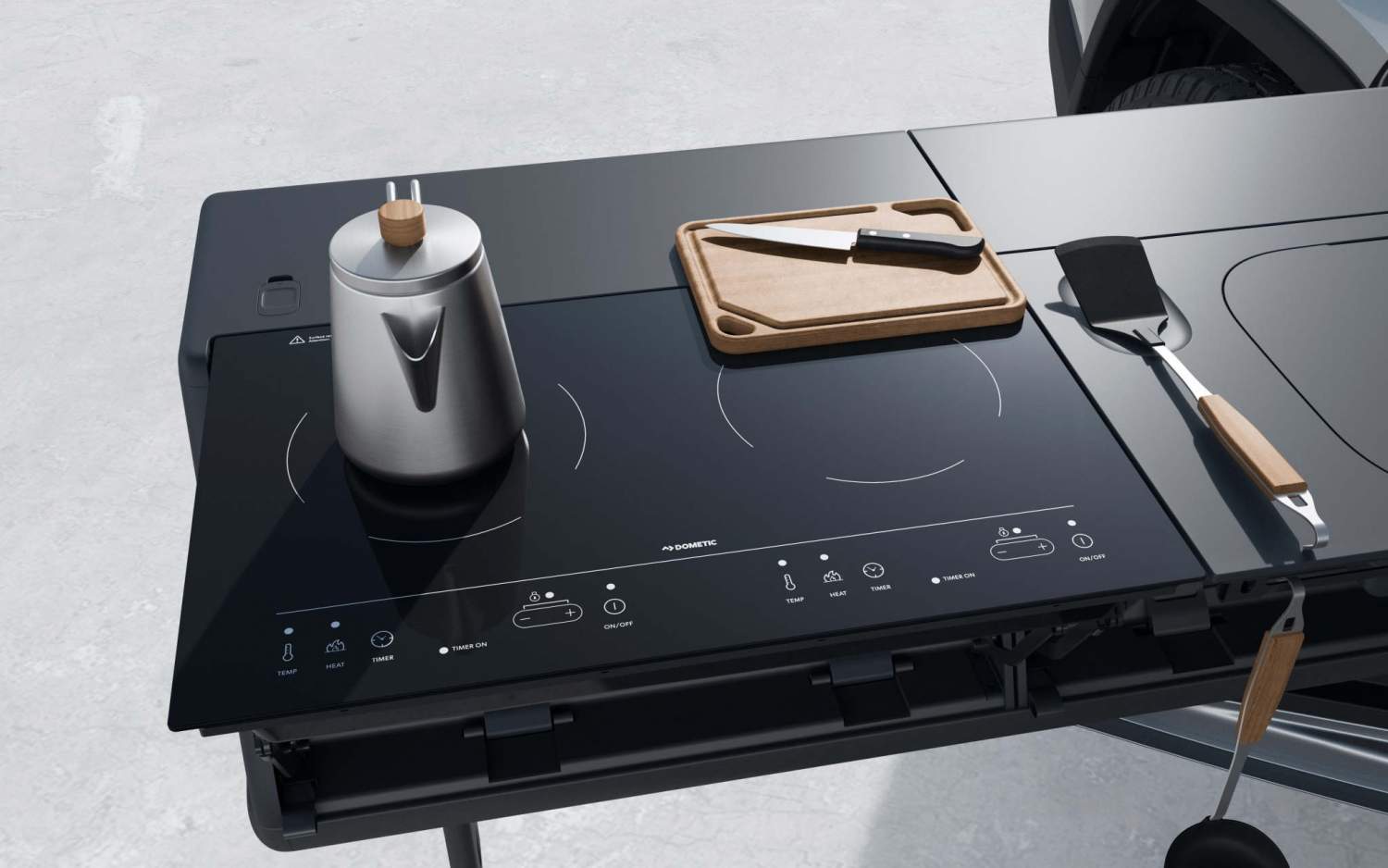 Each piece of the specially-curated cook set – down to coffee pourover drippers and a hand-powered bean grinder – has its own niche to slide into. Sinks concertina out; light poles slot into carefully positioned mounting holes.

There’s something of the chocolate box about it, a sense of surprise-and-delight to the packaging. It makes you smile in the same way that watching those “tidy house hacks” videos where people organize their pantry and laundry cupboards make you smile: a strange sense of satisfaction at seeing something well planned and well executed. 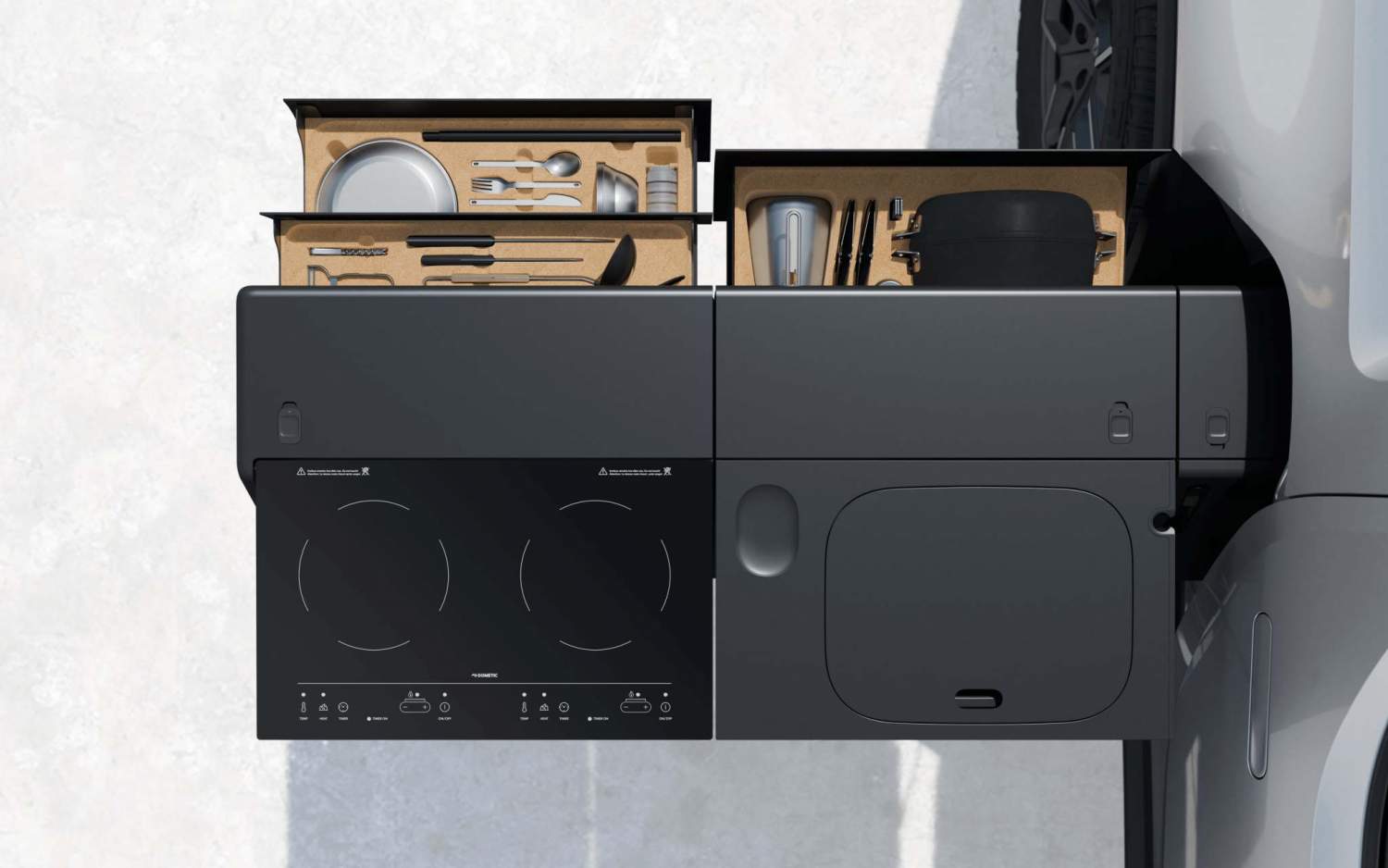 It’s clear that Rivian has given the camp kitchen setup a lot of thought, even if the number of people who actually end up using it may be a relatively small minority. As a way to pitch your new electric truck’s flexibility and its attention to detail, though, it’s perfect. Heading out into the wild and camping is one of those things a lot of truck-buyers (or would-be truck buyers) imagine doing, even if it’s a rarity in practice. Who wouldn’t want to pull out their Rivian cooktop and sear steaks or fry freshly-caught fish, as their R1T stood powerfully but silently alongside?

It’s part of what automakers – new and old – seem to be increasingly getting wise to about EVs. That it’s not enough for an electric pickup to match a gas or diesel truck on raw capability, or tow rating, or how much water it can wade through. It needs to not only be better, but better in a more cohesive way. Do something that an internal combustion truck just plain struggles to achieve.

The F-150 Lightning’s front trunk is a great example of that: a space that just isn’t available for cargo in a traditional pickup, repurposed to address the very real complaint about needing lockable storage. Ford talked about how it could be used as an impromptu desk, too – complete with outlets and the truck’s WiFi hotspot – though didn’t go quite as far in illustrating the potential as Rivian did with its kitchen. 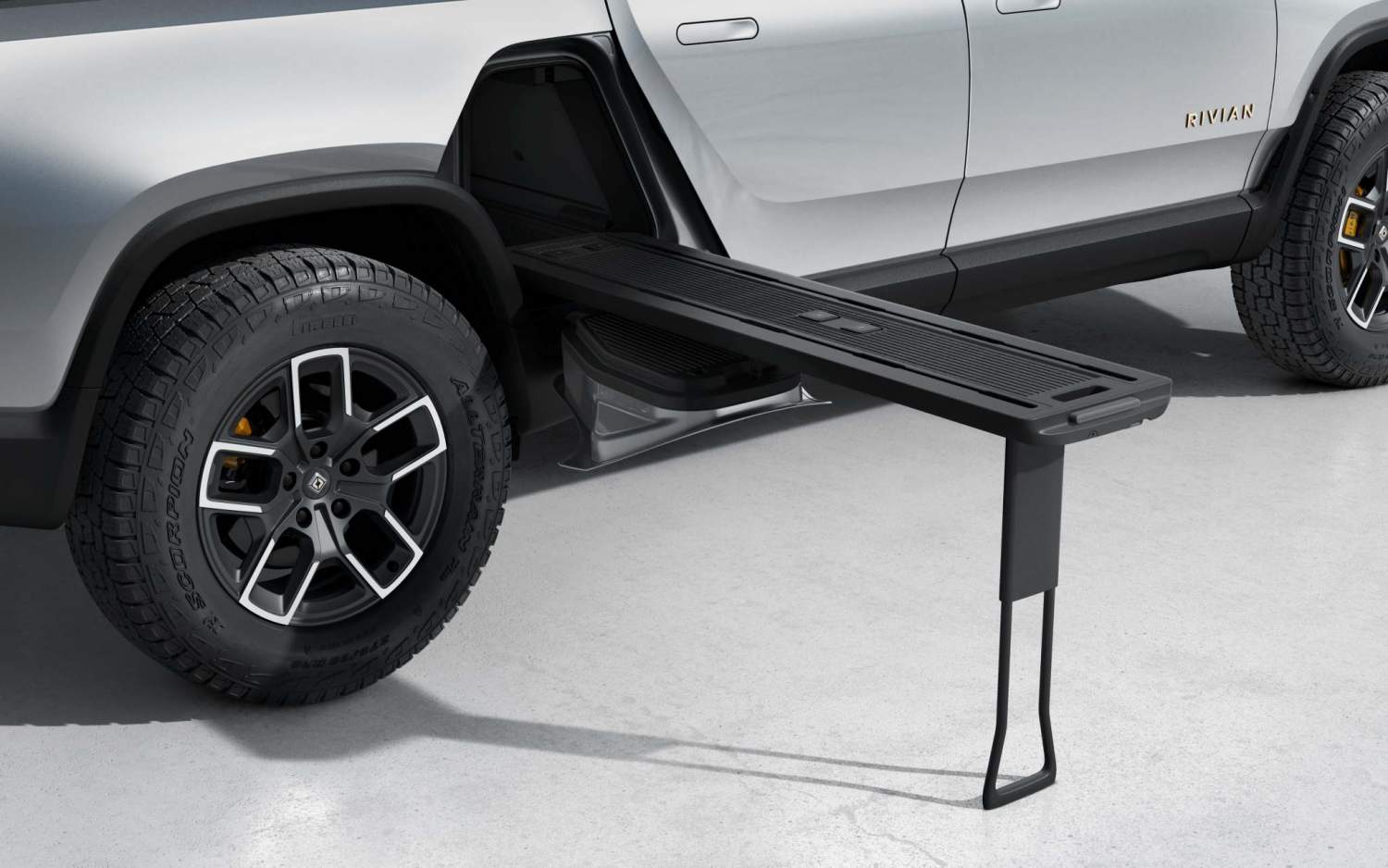 Honestly, I think all of the automakers with electric pickups to push could go further than they already are. There is a not-unreasonable lingering concern from some truck-driving quarters that EVs aren’t work-friendly. Range anxiety lingers (and seems fairly immune, in many cases, to rational discussion about just how much driving people actually want or need to do in a day), and the uncertainty of the new is a challenge to overcome.

Some arguments there are experiential: it’s hard to question EV performance when you feel the instantaneous pickup from an electric motor, or when you see it pulling sizable loads without breaking a sweat. All the same, eye-catching demos like Rivian’s are more important than you might think too. They’re a reminder that there’s more to an electric truck than just swapping out the gas engine for some batteries and motors, and more advantages compared to what you might think of being able to do with your existing pickup. A little imagination goes a long way.