Apple sued in US over iPad trademark

Apple’s iPad trademark headaches continue, with Chines foe Proview suing the Cupertino company in the US, along with accusing it of using a fake company to con Proview into believing it would not present competition in the market. Proview filed its suit at the Santa Clara Superior Court on February 17, Proview spokeswoman Alice Wang confirmed to the AP, citing Apple’s use of the iPad trademark in the Chinese market. The company claims it believed it was negotiating with an IP developer, which would not offer hardware competition for sales in China.

According to Proview, rather than negotiating directly with Apple, it believed it was discussing the potential trademark sale with “IP Application Development Ltd” (IPAD), an entity it claims Apple established specifically for the purpose of misleading the discussions. IPAD, Proview alleges, insisted that it would not be competing with computing hardware, such as Proview’s own iPAD computer device, Reuters reports. 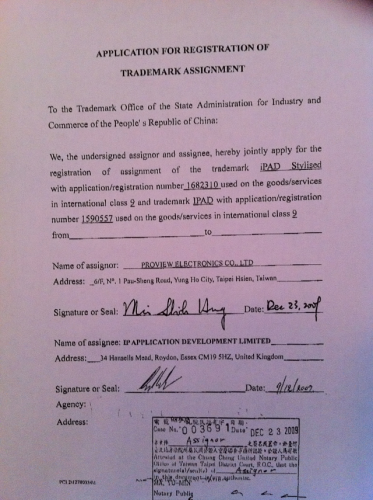 Apple’s own evidence cited in its Chinese and Hong Kong cases against Proview would seemingly confirm the separate company, though Apple would undoubtedly argue that doing so was a preventative measure to limit awareness of its future product plans. No matter the name of the company which bought the trademark, meanwhile, Apple still claims it now owns it for use in China, something Proview maintains is not the case.

In fact, Proview argues that Apple attempted to buy the trademark from a subsidiary that did not have the authority to sell it, something Apple also denies. The Cupertino firm’s lawyers have threatened Proview with a defamation suit over the disagreement. Proview also says that the flawed sale went ahead without the approval of the company’s creditors at the time, including a number of large Chinese banking institutions, which also invalidates it.

The exact terms of the Proview lawsuit against Apple in California are unclear, though the company has previously suggested it will sue for $2bn.