The folks at Rovio are no strangers when it comes to cross-promoting their brand with other gigantic names in the business, this time with Samsung and their Galaxy Note device, showing how even cartoon characters can use this massive in-between the tablet and handset Galaxy Note to cut out images and share them with friends. We already knew that the Rovio crew had released their next chapter in the Angry Birds Seasons series with a new 2011 winter season by the name of Angry Birds Seasons: Wreck the Halls!

You’ll see just a bit of information on the Galaxy Note in this short advertisement spot, the real information having already been released in the Galaxy Note itself last month. Have a peek at our hands-on and full review of the Galaxy Note courtesy of Chris Davies, then note that this means that its the international edition where a USA version has yet to be released. Meanwhile you can pick up the newest chapter of Seasons in the Android Market right this second.

Also note that this newest season also contains the new bird introduced in the 2011 Halloween chapter. It’s a bird that floats in tiny and explodes into a gigantic size whenever you want it to. You’ll see in the video above that the Galaxy Note will be the greatest place to play Angry Birds, certainly not the first place you’ve played it on a large screen, but made perfect through Rovio and Samsung’s collaboration here. They wouldn’t let the game look any less than perfect on the device after this, their second hookup – find the secret levels! 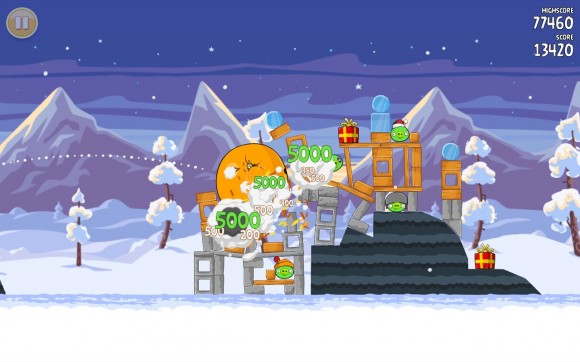