Android Pay is adding PayPal to your digital wallet

Android Pay is about to get a whole new payment method, with PayPal announcing that it’ll soon be an option rather than your credit or debit card. The integration is expected to launch in the US within the next few weeks, initially only for existing balances already in a PayPal account. However, that will be enhanced over the coming months, the payments provider says.

Eventually, PayPal has confirmed, Android Pay users will be able to make payments with any card that has been stored in their PayPal account. That’s thanks to the recent tokenization partnerships the company has made with the major card networks, it points out. You’ll need to have a device running Android 4.4 or higher.

Although PayPal is new to Android Pay, it’s not the first time the payments provider has worked with Google. Indeed, PayPal has been an option on Google Play for three years now. Then, as with the Android Pay deployment, PayPal co-existed with traditional credit cards on the account, rather than necessarily replacing them. 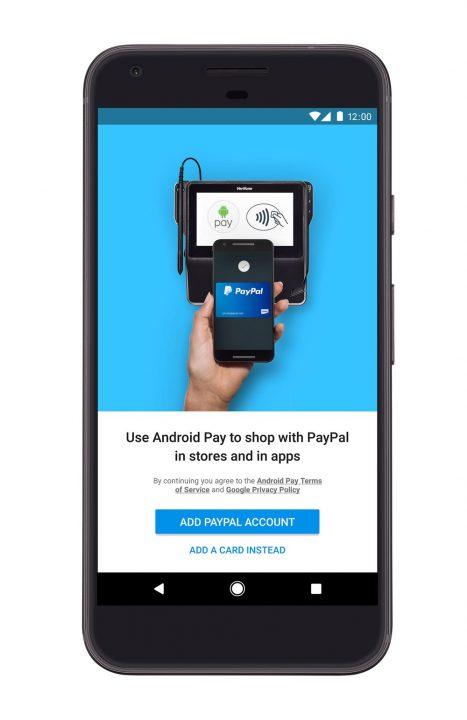 One of the longer-standing payments companies in the internet era, PayPal has seen its dominance challenged over recent years. Apple Pay and Android Pay have, by virtue of being preloaded on iOS and Android devices by Apple and Google, taken increasing market share of the digital payments space. Indeed, as far back as April 2015 analysts were warning that PayPal usage was in free fall because of the increasing use of Apple Pay.

To push back, PayPal has been cutting deals and striking partnerships with some of the upstarts in the industry, inking agreements with everything from Facebook Messenger through to carriers like Vodafone and Telcel. Indeed, today it insists it’s still more than relevant. The company says it processed $102 billion in mobile payment volume, across two billion mobile payment transactions, in 2016, for instance.

It’s not only digital payment systems like Android Pay that PayPal is making headlines with today. Soon, joint customers with a Wells Fargo credit or debit card will be able to make contactless payments in stores set up with NFC terminals.

As for Android Pay’s continued deployment, that has seen a steady progression of new banks and more join the ranks. In October last year, Google added Visa Checkout and Masterpass, joining Chase and Uber Payments Rewards from the month prior. That’s not all been good news for other Google products, though: in opting to focus on Android Pay, Google decided to phase out its little-known Google Hands Free system earlier this year. That used Bluetooth to communicate with registers, rather than NFC.