The mobile iteration of PayPal is taking a dive – and has been taking a dive the for past year – as Apple Pay begins to take a firm grasp on mobile payments. Thus says the data presented by 451 Research in a study conducted over the 3-month period ending this March, 2015. In it, 451 Research’s ChangeWave service had 4,168 respondents “primarily based in North America” answer questions about their planned use (over the next 90 days) of mobile payment applications as well as issues of security therein.

This study has been being run by 451 Research over the past year. ChangeWave Mobile Payment Trends show PayPal and Apple Pay at odds, with Apple Pay rising in popularity as PayPal falls.

Apple Pay was formally launched back in October of 2014 on the iPhone 6 and iPhone 6 Plus for mobile payments with a variety of retailers. The June 2014 question of how likely it’d be users would make use of Apple Pay in the next 90 days – at that point – was a bit of an oddity. 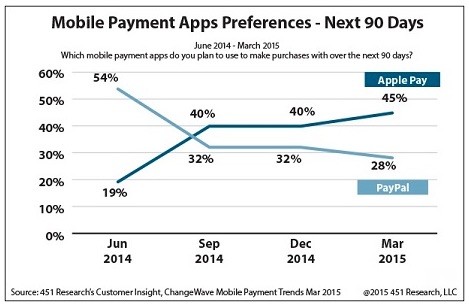 PayPal mobile has been in play for a considerably longer amount of time, appearing (after its initial launch well before) on devices like the Galaxy S5 back in April of 2014. 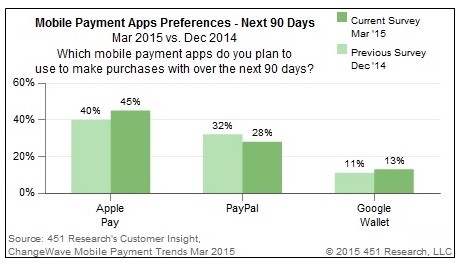 This study shows the projected use of either payment platform in the future – it does not track actual usage. 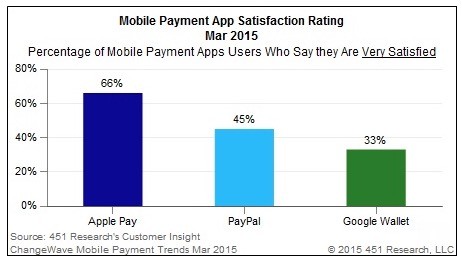 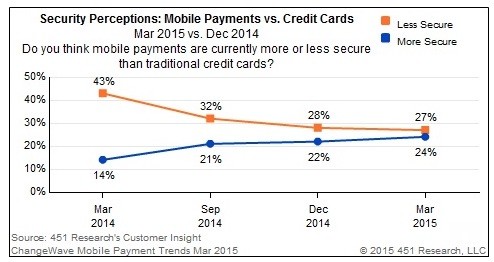 As for security – 24% suggest that mobile payments are “more secure” that traditional credit cards. This percentage is made up of 6% of people saying “Significantly More” and 18% saying “Somewhat More.” 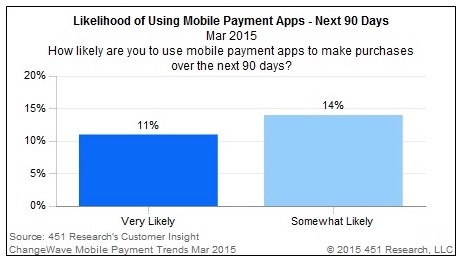 You’ll also notice that the total percentage of users planning on actually planning on making use of mobile payment apps sits at 25%, or one out of every four people responding.