This week we’ve had the opportunity not only to see our first glimpses of Android 4.4 KitKat, but to test it on a variety of phones. What you’re seeing here is the first look at homescreen-based “OK Google” voice commands – aka hands-free mode – on an HTC One. This device is amongst a wide variety of devices that, working with an early build of the Google Experience launcher (from Google), will work with this bit of functionality.

See our full SlashGear 101 on Android 4.4 KitKat now for a deep dive into what’s new for all Android devices!

Unfortunately the Google Experience is not available to everyone at this very moment who isn’t willing to download the software from a 3rd-party host. Friendly users of the Google Nexus 5 have ripped the software from their device to host on the internet – where users galore have accessed it. It’s this build that’s allowing devices of all kinds the ability to work with the voice command system from the desktop. 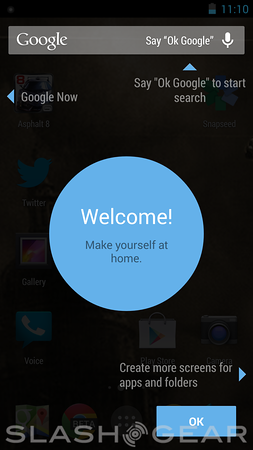 The big revelation here is that this command system works with more devices than the LG-made Nexus 5 itself. While we’d assumed the voice activation system would have been build in and optimized for each individual smartphone uniquely, it would instead appear that Google has built the technology into the launcher itself.

So have at it, and make sure you check out the rest of the little bits and pieces as well! This is a whole new door for Google’s mobile operating system Android, coming your way to a device of most any size and shape soon!