Galaxy Note 5 beats all other phones in customer satisfaction index

Today the ACSI Telecommunications Report 2016 has revealed consumer satisfaction in smartphones in the United States. This American Customer Satisfaction Index (ACSI) report is run on “interviews with roughly 70,000 customers annually”, asking questions about customer satisfaction in brands including Apple, Motorola, Samsung, LG, HTC, and more. Measures are reported on a scale of 0 to 100, 100 being the most satisfied. You might be surprised who holds the number 4 spot – it’s not a phone released this year, nor last year, believe it or not.

Important to note is the fact that these interviews were run in March of this year. That means that the most recent smartphone released by Samsung was the Galaxy Note 5, while the Galaxy S7 had only barely reached stores, having also been released throughout March. The iPhone 6S and iPhone 6S Plus were the newest smartphones from Apple.

That said, several devices appear on this list that we know didn’t make a massive impact in smartphone unit sales over the past few years, including such oddities as:

These phones are not headliners. They’re not even particularly well known. Instead, they’re devices that are either inexpensive, available at prepaid mobile phone carriers – Boost Mobile, TracFone, Straight Talk, and the like.

You’ll also notice that the one interrupter of the top 16 spots is Motorola’s Moto G. That’s a device that we’ve been impressed with for several generations – it and the Moto E were some of the best budget Android phones of the year 2015.

Devices that didn’t sell nearly as well as the iPhones and Galaxy devices on this list have satisfaction ratings that are mightily impressive. 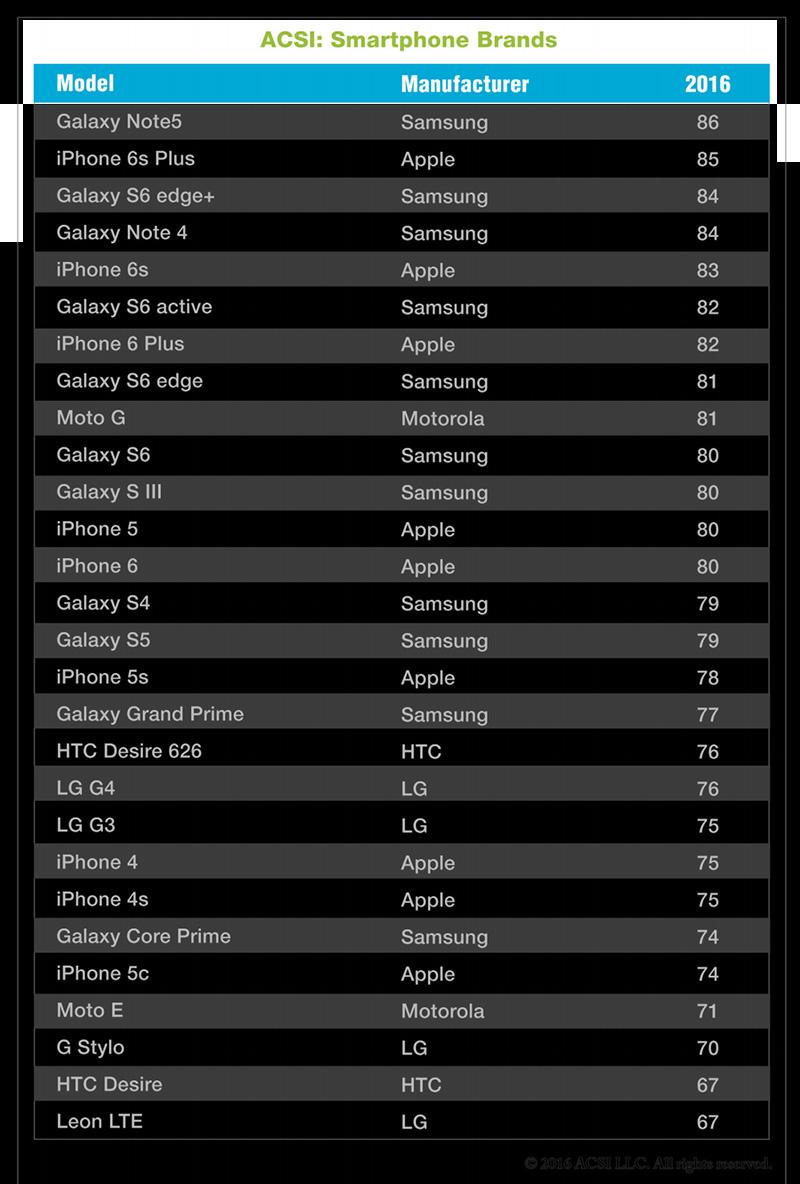 The top four spots are held by the most massive smartphones on the market.

Then you’ll find the iPhone 6s, which we’ve come to expect higher up on a list like this, then the Galaxy S6 Active.

You’ll also find the Galaxy S III, LG G3, and the iPhone 4 on this list – plain evidence that these device makers have made devices that stand the test of time – at least for a few years after they’ve been released.