All-electric, this Volvo Concept Recharge teases the shape of SUVs to come

Volvo has revealed its new vision of an all-electric SUV, with the Volvo Concept Recharge teasing just what the Swedish automaker could do once gas engines are out of the equation. Although the Recharge brand is already on the road, now with the XC40 Recharge electric crossover and soon to be joined by the C40 Recharge, combustion engines have still had a lingering impact on their design.

“Volvo’s first generation of electric cars shares a floor with combustion engine-powered cars, which requires a balance in proportions and space to be able to accommodate both a battery pack and an internal combustion engine,” the automaker points out. “The next generation of Volvo’s fully electric cars – the first of which is the company’s first SUV on a completely new electric-only technology base – will feature flat floors, as previewed in the Concept Recharge.” 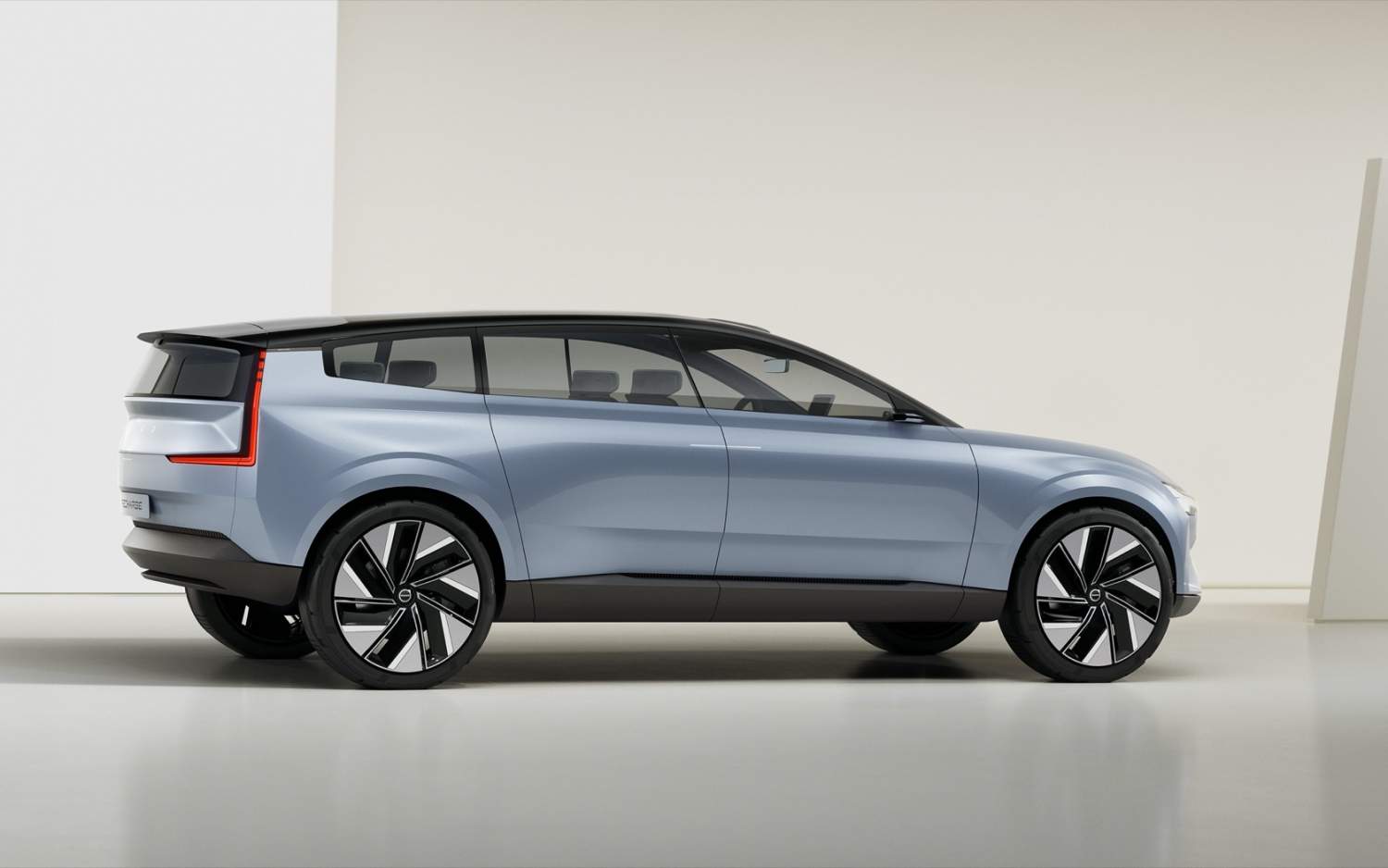 That all-new SUV will be the successor to the XC90 luxury SUV, which we’re expecting to see revealed in 2022. As well as the new SPA2 platform and technology like LIDAR that’ll power Level 3 driver-assistance systems, the flagship EV will also drop the old name. Instead, Volvo teased today, it’ll have an actual name rather than a series of numbers and letters.

What, exactly, that will be and what the new SUV will look like will be confirmed closer to launch. However, the Concept Recharge does drop some heavy hints as to what Volvo might have in mind.

At its core, it relies on repurposing space that would once have been taken up by an internal combustion engine and the related engineering. Since there’s no gas or diesel powertrain under the hood, for example, the Concept Recharge can drop that lower and pull the A-pillars forward. That unlocks improvements in visibility and aerodynamics. 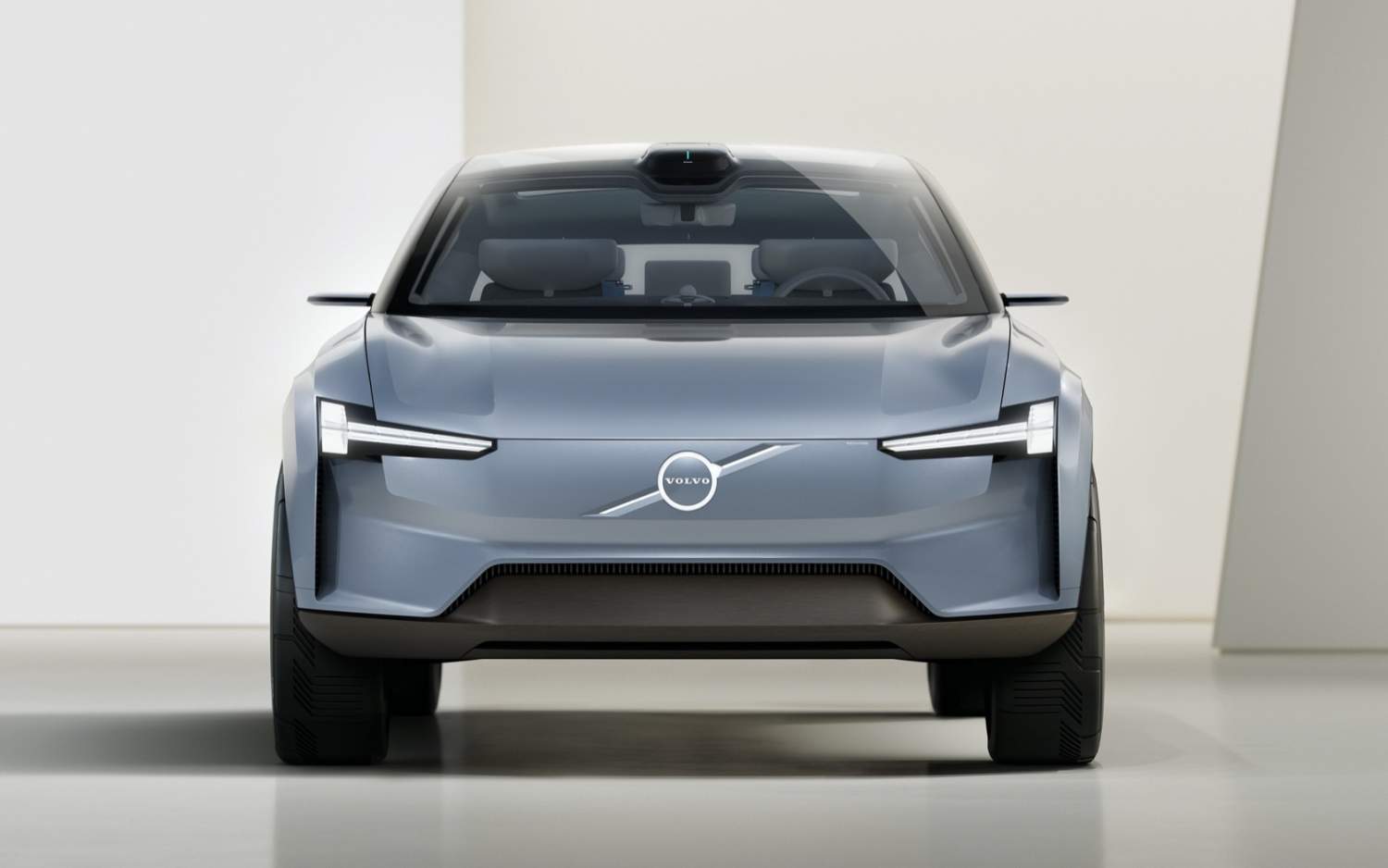 The battery pack now occupies the wheelbase, with Volvo pushing the front and rear wheels out further to maximize space there. Bigger wheels are added too, and there are shorter overhangs and more cabin space as a result.

At the front, with no traditional grille required for engine cooling, there’s a new, more streamlined shield design. That has a reinterpreted logo – which glows – along with a revamped version of the Thor’s Hammer headlamps. They now animate, with an “opening” graphic at night. At the rear, the taillamps are also distinctively shaped, but are also mounted on trailing wings to massage the aerodynamics even further. 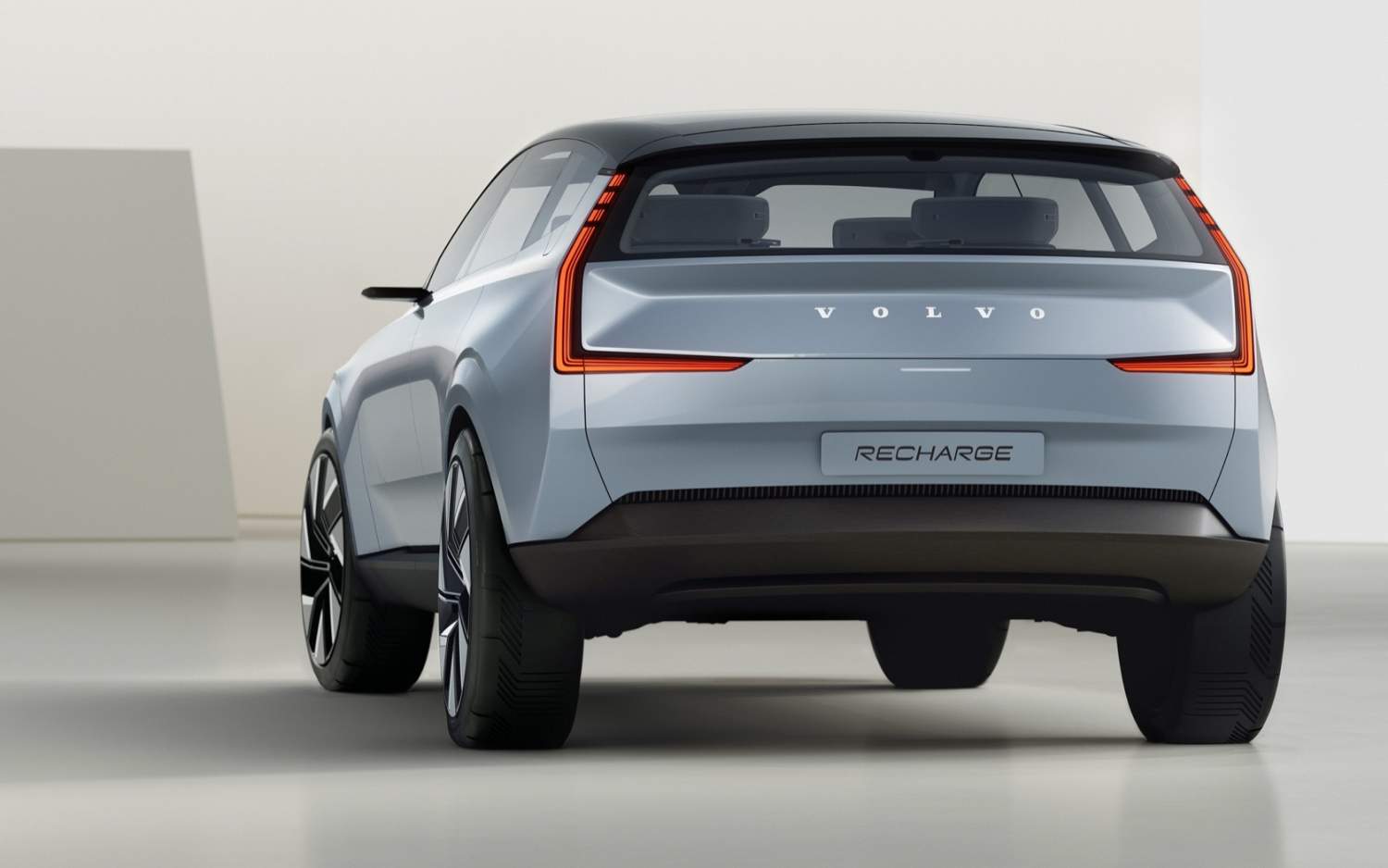 The resulting car is both recognizably a Volvo – indeed it arguably pulls in more hints of wagon aesthetic than the automaker’s current SUVs manage – but also something new. Certainly, there’s no mistaking it for anything other than an EV, and the same goes for the cabin. 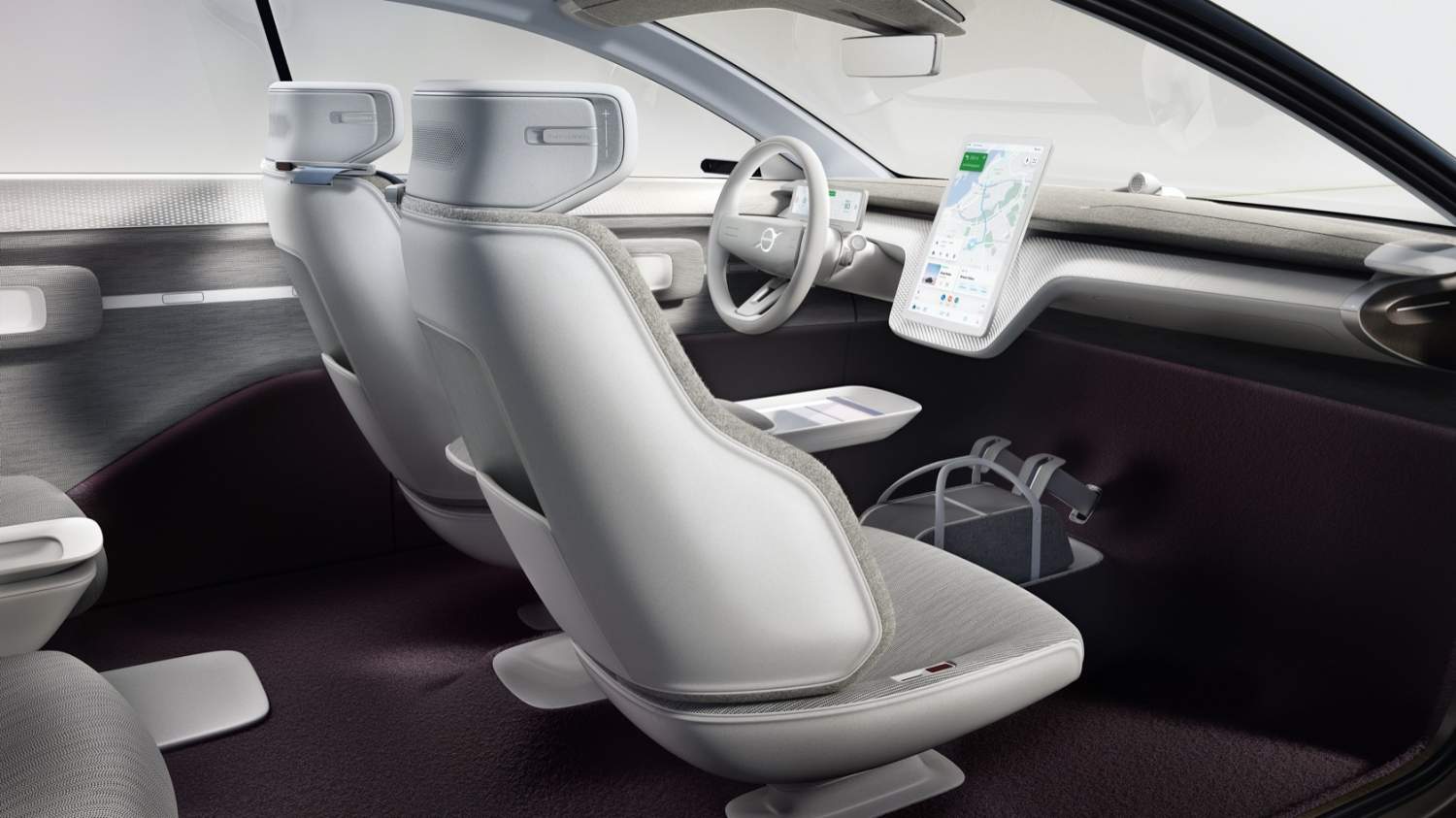 At the front, there’s a new dashboard design with a freestanding 15-inch touchscreen in the center. That runs an Android Automotive OS-based infotainment system, but with a new layout and graphics that work in tandem with the digital cluster screen and the head-up display. They’re surrounded by technical fabrics and other modern, sustainable materials, following the XC40 Recharge and C40 Recharge in eschewing the traditional leather and virgin plastics in favor of something more environmentally considered. 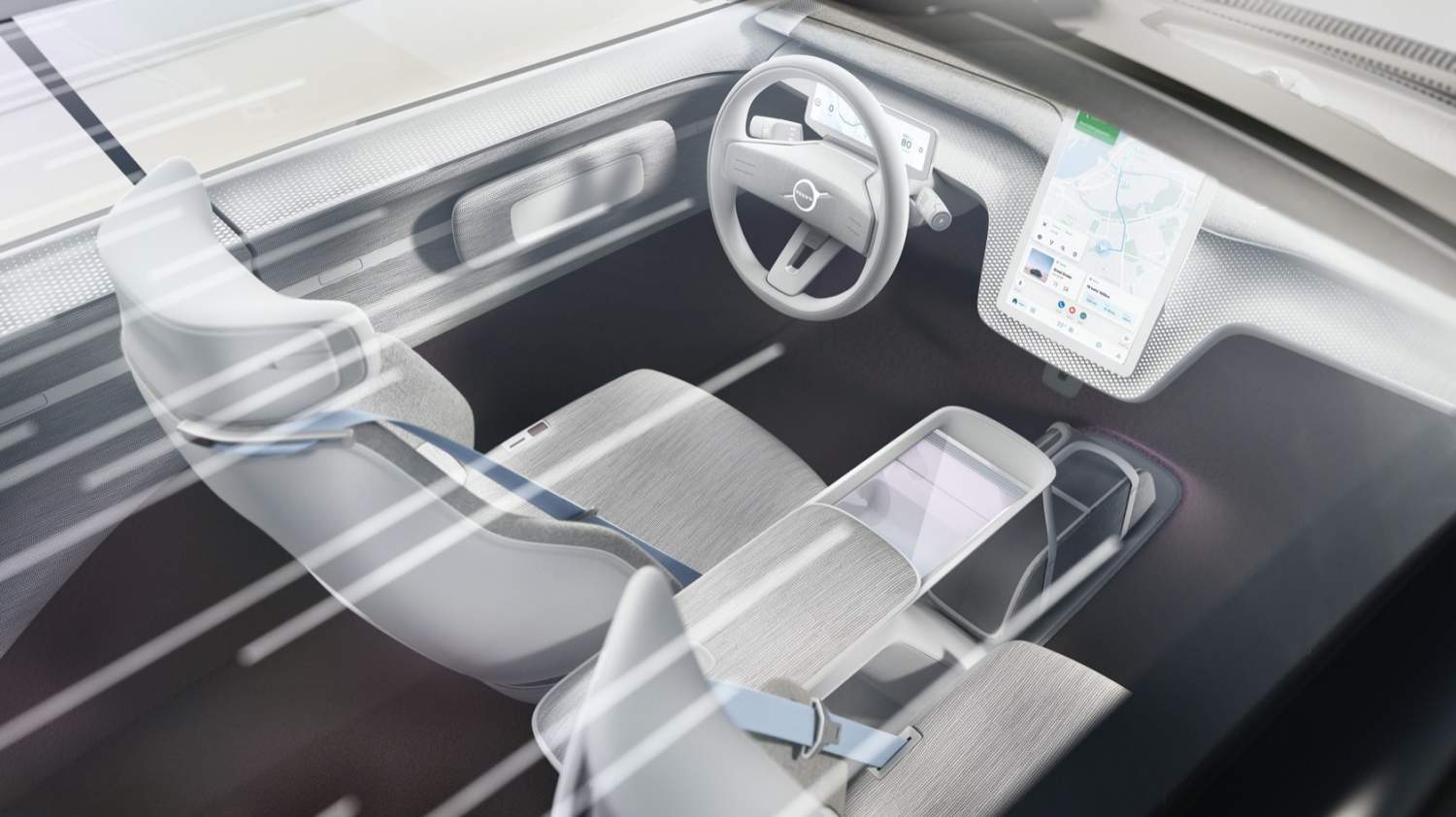 At the rear, the seats have built-in elevating bolsters, which can be used to convert them into raised car seats for younger passengers. A completely flat floor throughout the vehicle also helps with storage and cargo, in addition to the sensation of spaciousness. 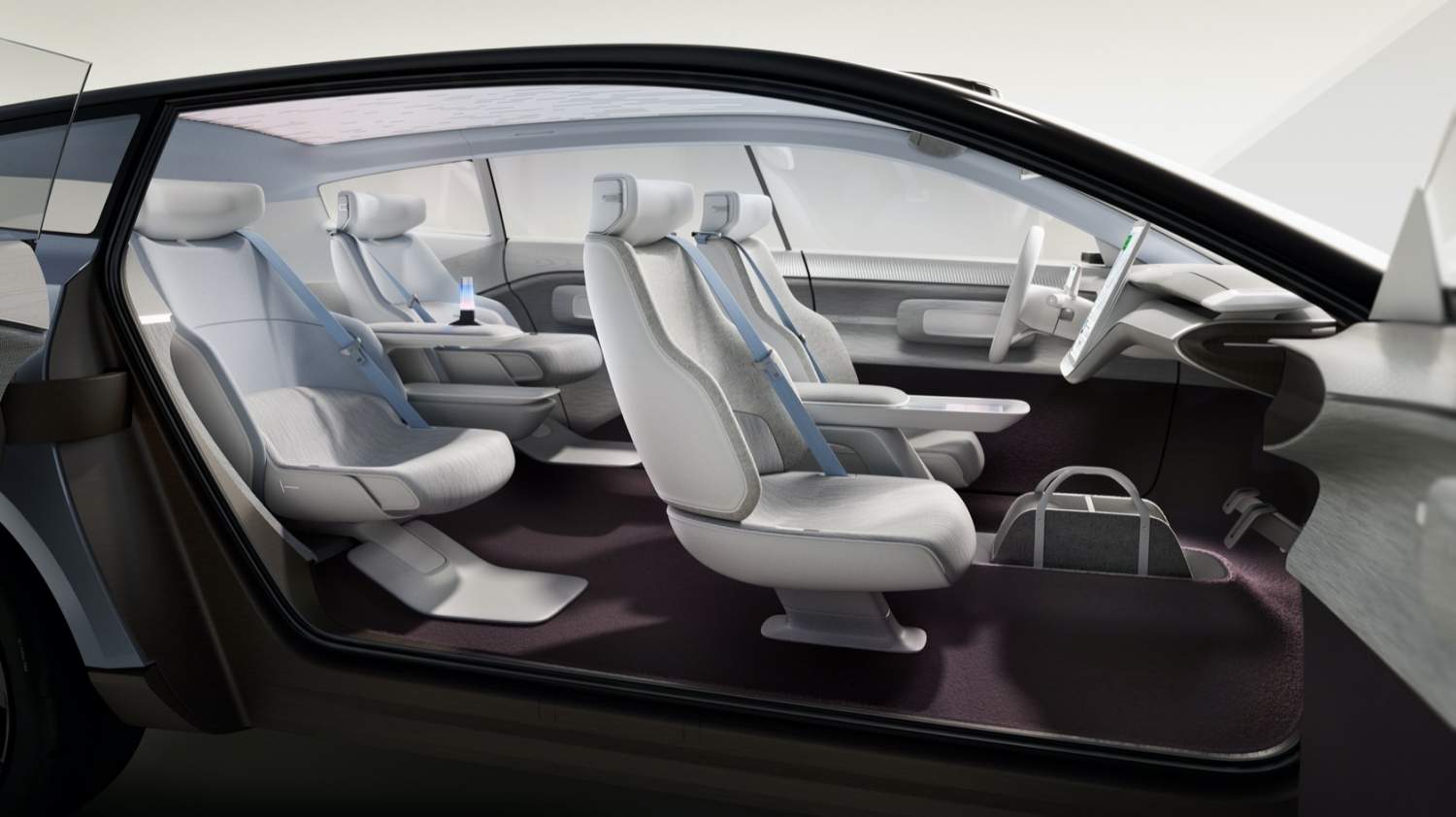 As the new XC90 successor will debut, there’s a Luminar LIDAR sensor mounted above the windshield. That’ll work with the usual cameras, ultrasonics, radar, and other sensors to deliver features like Volvo’s unsupervised highway pilot system, where its EVs will be able to drive themselves on certain stretches of highway without requiring human involvement. It’ll also be instrumental in the VolvoCars.OS powered safety suite. 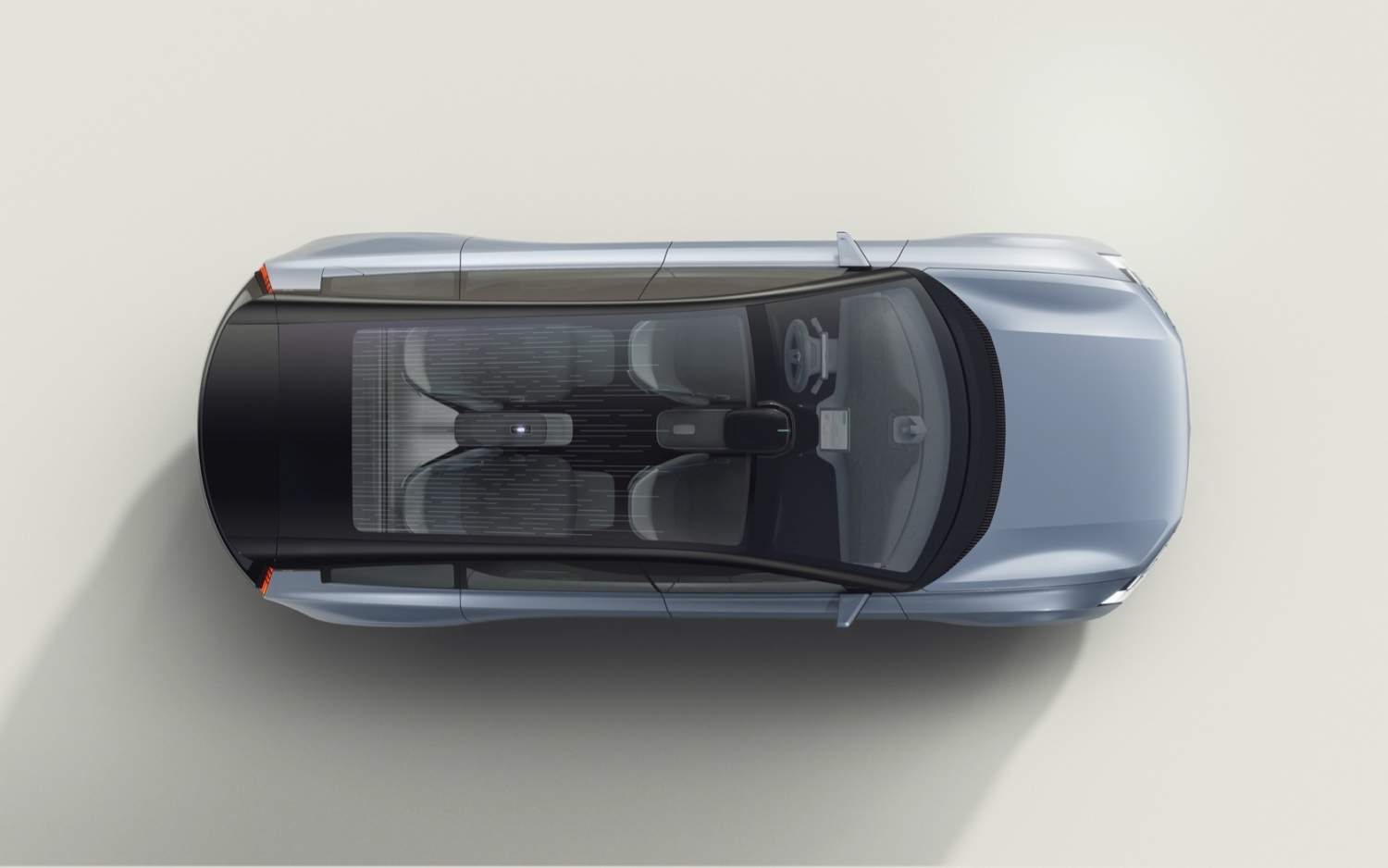 Exactly how much of what we see in the Volvo Concept Recharge will actually make it to a production vehicle is – as with any concept car – the biggest question. Certainly, it’s hard to imagine the clamshell doors making it, though many of the other features Volvo has implemented do seem more road-ready. It’s also hard not to look at the silhouette of the Concept Recharge and imagine how it might evolve into something like the Polestar 3, the upcoming electric SUV that Volvo’s performance-minded subsidiary plans to reveal later in the year. 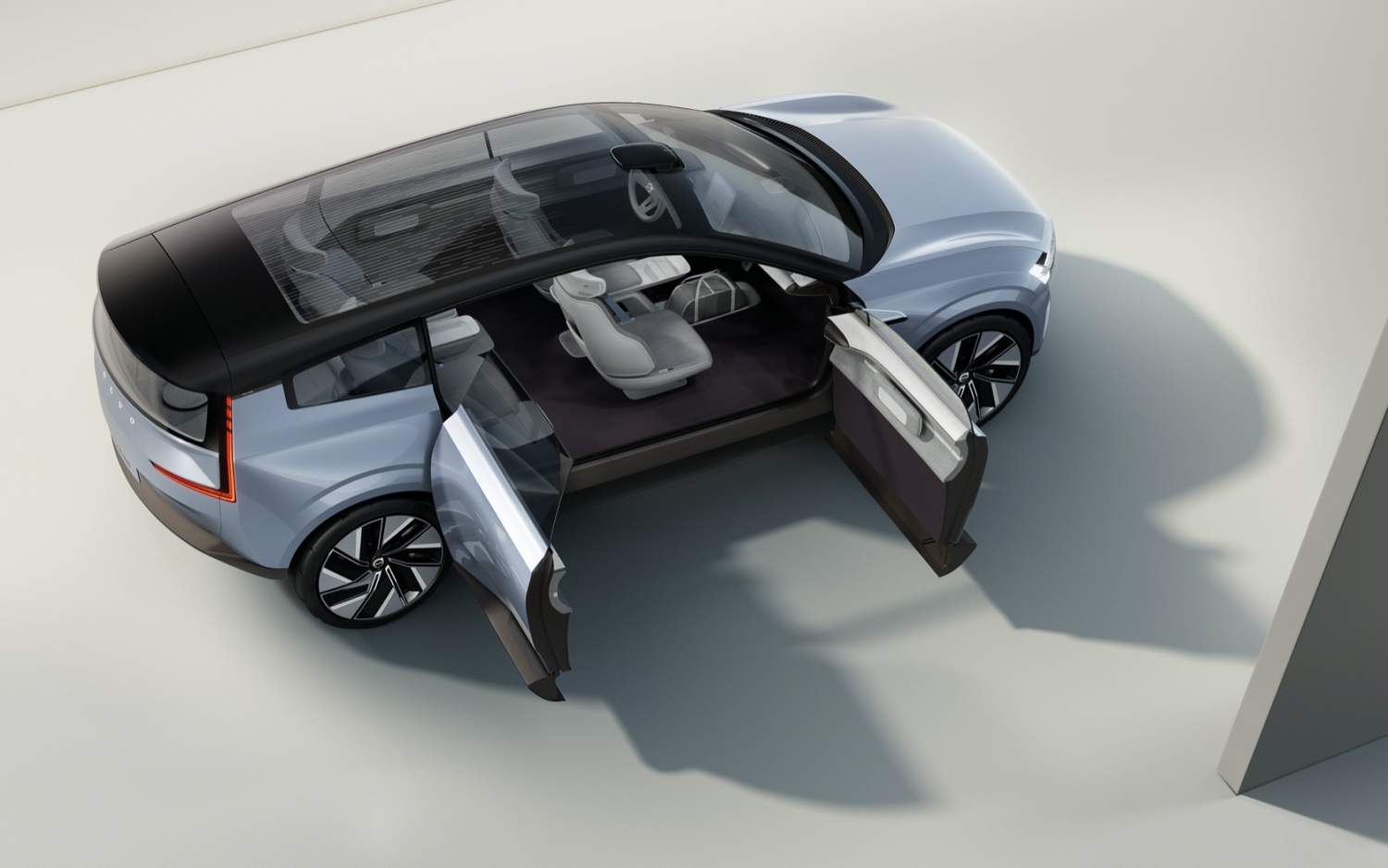 For the thorny topic of range, though, we may have to wait a little longer for the biggest gains. Volvo has ambitious recharging targets for next year’s XC90 replacement, and is also promising bidirectional power support, but it’ll be the third-generation EV platform which brings the big power density improvements the automaker has in mind. Vehicles using that should start to arrive from midway through this decade, and Volvo says it’s confident it can break the 1,000 kilometer (620 mile) barrier for real-world range on a charge by 2030.