With the Acer Chomebook 13, the brand summons the NVIDIA Tegra K1 processor to stand out from the pack. With high-end processing power the likes of which only otherwise rest inside the NVIDIA SHIELD Tablet, what else is needed to create the perfect Chromebook? How about one of the finest keyboard we’ve experienced on a Chromebook as well as a trackpad that would make most Windows notebooks jealous?

What we’re seeing here on the Acer Chromebook 13 is the finest Chrome OS-based notebook experience outside of the highest-end Chromebook Pixel. At a fraction of the cost of that metal beast, the all-plastic Acer Chromebook 13 presents a powerful value option. 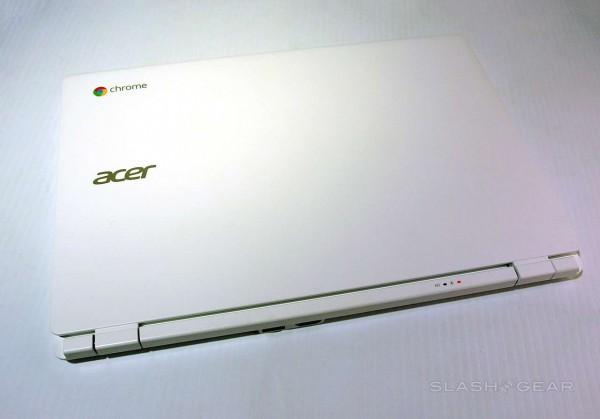 This isn’t an entry in the first wave of ultra-affordable Chromebooks. It’s not low-end for a tiny amount of cash. Instead the Acer Chromebook 13 takes on the mid-tier, and it does it better than any mid-tier Chromebook that’s come before it. 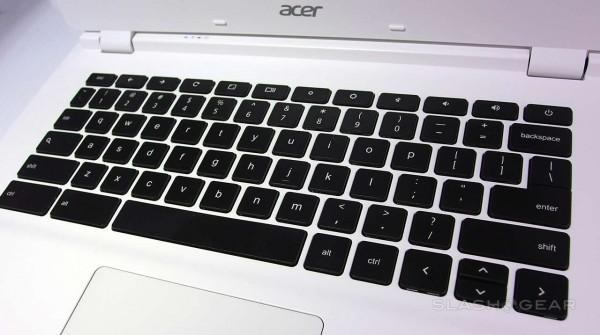 The keyboard here has lightly textured keys that are set up with soft-touch response. When you type, you can barely hear it. This isn’t the clickity-clack of the past – it’s more of a series of “bump bump bumps”. 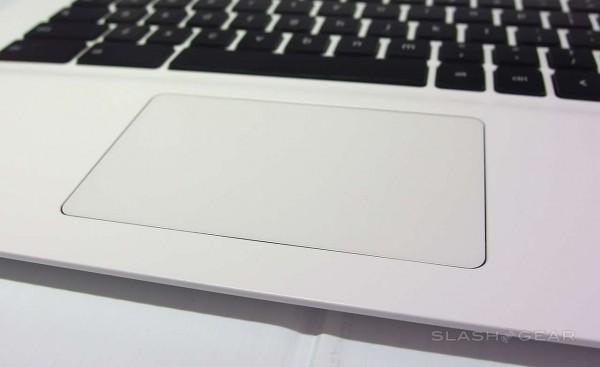 Trackpad responsiveness is excellent. We’ve long supported the idea that the MacBook line had the ideal trackpad, holding the line when it came to all other notebooks on the market. With the Acer Chromebook 13, the experience catches up. 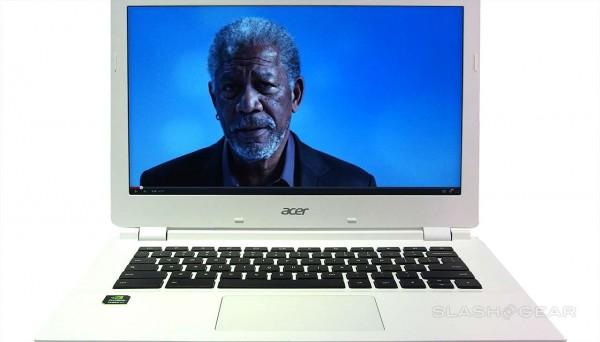 With a 13-inch display, this Chromebook isn’t limited to a tiny keyboard setup. Instead of the cramped spaces we’ve seen in the first couple of waves of Chromebooks, here we’ve got breathing room. Typing is comfortable and precise. 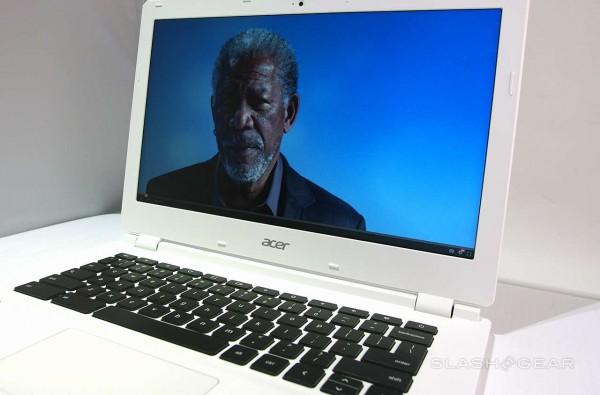 The display itself is, perhaps, the least impressive element in this whole Chromebook setup. Viewing angles are not fantastic – get to about 30 degrees up, down, left, or right of straight on with the display panel and colors begin to darken. 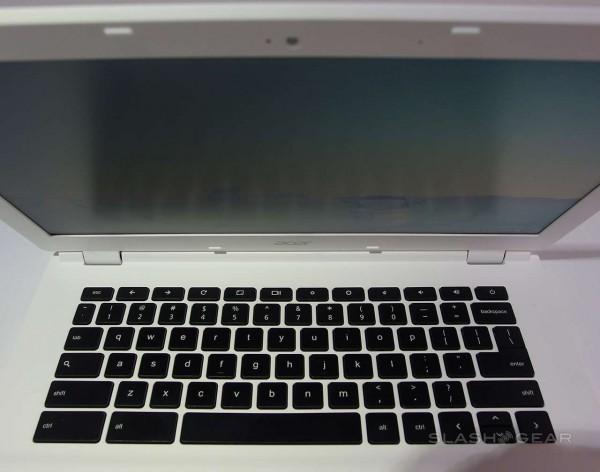 On the other hand, the matte quality of the display is good – light reflections are, indeed, lessened compared to other non-matte displays. Sharpness is also fine – we’re rolling with the 1080p edition of this notebook, if you didn’t already find that out – and sharpness is a fine as we’d expect. 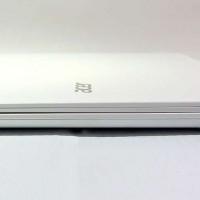 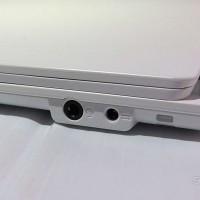 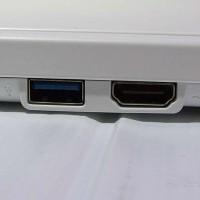 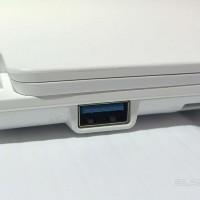 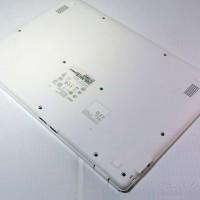 This machine also comes with an impressive array of ports. Output high-definition video with a full-sized HDMI port, connect with USB 3.0, or make with the headphones and microphone action. Chat with Hangouts with this Chromebook’s chat-ready webcam as well.

When you’re working with Chrome OS, you’ve got a very basic, very rudimentary base. You can save files to your desktop, and there are some apps that work offline, but the vast majority of your work will be done on the internet.

For the Acer Chromebook 13, the Chrome OS experience isn’t all that different from the rest of the Chromebooks on the market. What IS different is the device’s ability to handle multiple high-needs processes at once.

We’ve played music in one tab while editing files in the other without issue. We’ve – for no reason other than to attempt to overload the machine – played multiple videos at once – no issues found.

Whatever you’re able to throw at this Chromebook, you’ll be able to do it, no issue. We’ll be continuing to run whatever benchmark tests we find through the future – but for now: there’s no everyday piece of work we’ve found that’s too much for the Acer Chromebook 13 to handle.

In addition to giving the Acer Chromebook 13 the graphics power it needs to get through any aesthetically pleasing task, the NVIDIA Tegra K1 processor is responsible for the impressive battery life in this device. Just as impressed as we were (and continue to be) with the NVIDIA Tegra K1 in the NVIDIA SHIELD Tablet, so too has NVIDIA shown its processor power here. 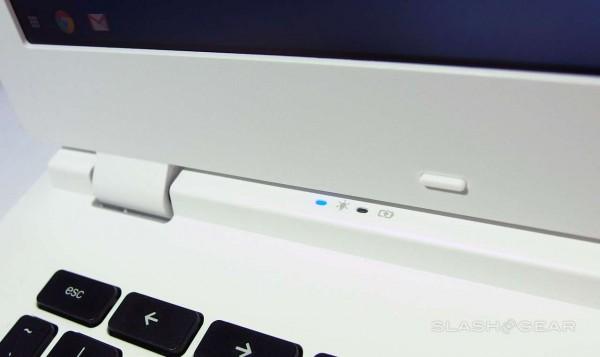 We’ve got the 1080p edition, called the Chromebook 13 FHD – the other is just called “Chromebook 13 HD”. Thus far we’ve not been able to run the battery out in standby mode.

That 11-hour battery life guarantee is essentially everything Acer suggests it is. While we’ve been able to run the battery out in around 8 hours (with a full day of work as well as music playing in the background), there’s no reason to believe you’d need to bring this device’s charger with you on an afternoon out unless you plan on streaming HD video.

The Acer Chromebook 13 FHD is the finest Chromebook on the market today in its price range. The 720p “HD” version will cost you $279 while the 1080p “FHD” version we have here will run you a cool $299 USD. That’s certainly not half bad.

The only piece of equipment we’d choose to improve is the display – not its sharpness, nor its color reproduction, but its viewing angles. Outside of that, there’s really nothing else the Acer Chromebook 13 FHD could do better.