Motorola was early aboard the 5G train, at least with the promise of the 5G Moto Mod, and so as US networks prepare to light up coverage for subscribers it’s no surprise to see the Moto Z3 add-on get the regulatory nod. Announced last year, the 5G-toting backpack for the Android smartphone is actually a lot more complicated than it first appears.

Motorola launched the Moto Z3 midway through 2018, and it used some careful language to do so. The smartphone was to be the first “5G ready” device, even though 5G networks weren’t available at that point. Indeed, out of the box the Moto Z3 didn’t even have 5G support.

That’s because Motorola was relying on an accessory to add 5G capability after the fact. The smartphone-maker’s argument was that this allowed it to get the new device on the market sooner, as well as allow owners to upgrade the functionality later on instead of having to buy a whole new phone. Of course, there was also the fact that it was a handy marketing point for both Motorola and carrier partner Verizon.

What neither company was saying was exactly when the Moto 5G mod would actually arrive, only that it would be sometime in 2019. That mysterious date, though, must be relatively close at hand. The 5G add-on – which clips onto the back of the smartphone using Motorola’s Mods modular system – has been spotted passing through the FCC.

There, it was granted approval for use on public networks. Motorola is promising a big uptick in performance with it installed, too. Verizon claims its 5G network will – coverage depending, naturally – deliver speeds of up to 5 Gbps. 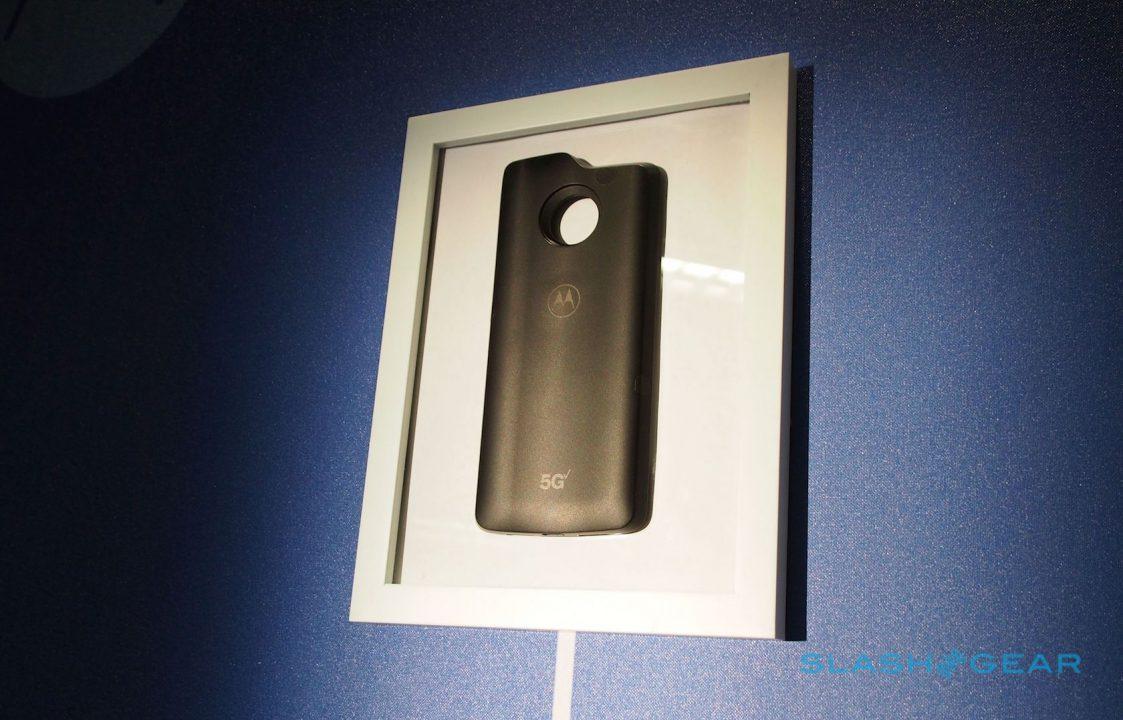 What the 5G Moto Mod isn’t is just a new modem and some antennas, however. Inside is Qualcomm’s X50 5G modem, announced all the way back in 2016 but only now reaching the market. Because of how it’s been designed, though, the X50 also requires the Snapdragon 855 chipset as well.

The 5G Moto Mod is more complex than it looks

As a result, Motorola’s Mod doesn’t just include the X50 but a whole Snapdragon 855 too, in addition to the QTM052 antennas required for the 5G to operate. Ironically, that makes the Mod more powerful in SoC terms than the Moto Z3 it’s actually attached to: the phone itself only has a Snapdragon 835 chipset. Motorola also throws in a 2,000 mAh battery to power the Mod independently.

Sadly there’s no way to tap into the Snapdragon 855 in the 5G Moto Mod and use it for apps on the phone. The complexity of the add-on, meanwhile, means it may not be as cheap as many are hoping. While neither Verizon nor Motorola have confirmed pricing at this stage, the fact is that you’re buying some of the key aspects of a whole new smartphone – processor, modem, antennas, and battery – just without a screen and cameras.

Exactly how much it’ll end up costing remains to be seen; Verizon could well opt to heavily subsidize the 5G Mod in the name of encouraging those within 5G coverage to actually upgrade. With Mobile World Congress 2019 fast approaching, and plenty of 5G news expected at the Barcelona show, we wouldn’t be surprised if Motorola and Verizon had some updates on that front.