I’ll confess, at first I was scratching my head over the 2022 Volvo C40 Recharge. Volvo’s second BEV – and its first to be designed from the outset as solely-electric – may give an old name a new lease on life, but the compact crossover itself isn’t a huge departure from the XC40 Recharge already on sale. Or, for that matter, from the Polestar 2.

It’s definitely a handsome car. The last outing of the “C” for Volvo was the beloved C30, which flirted with both coupe and hatchback style; for the C40, the swooping roofline echoes the crossover-coupe aesthetic that’s now fashionable. Though from the front it may look like the XC40 Recharge, the tapering rear is very different. 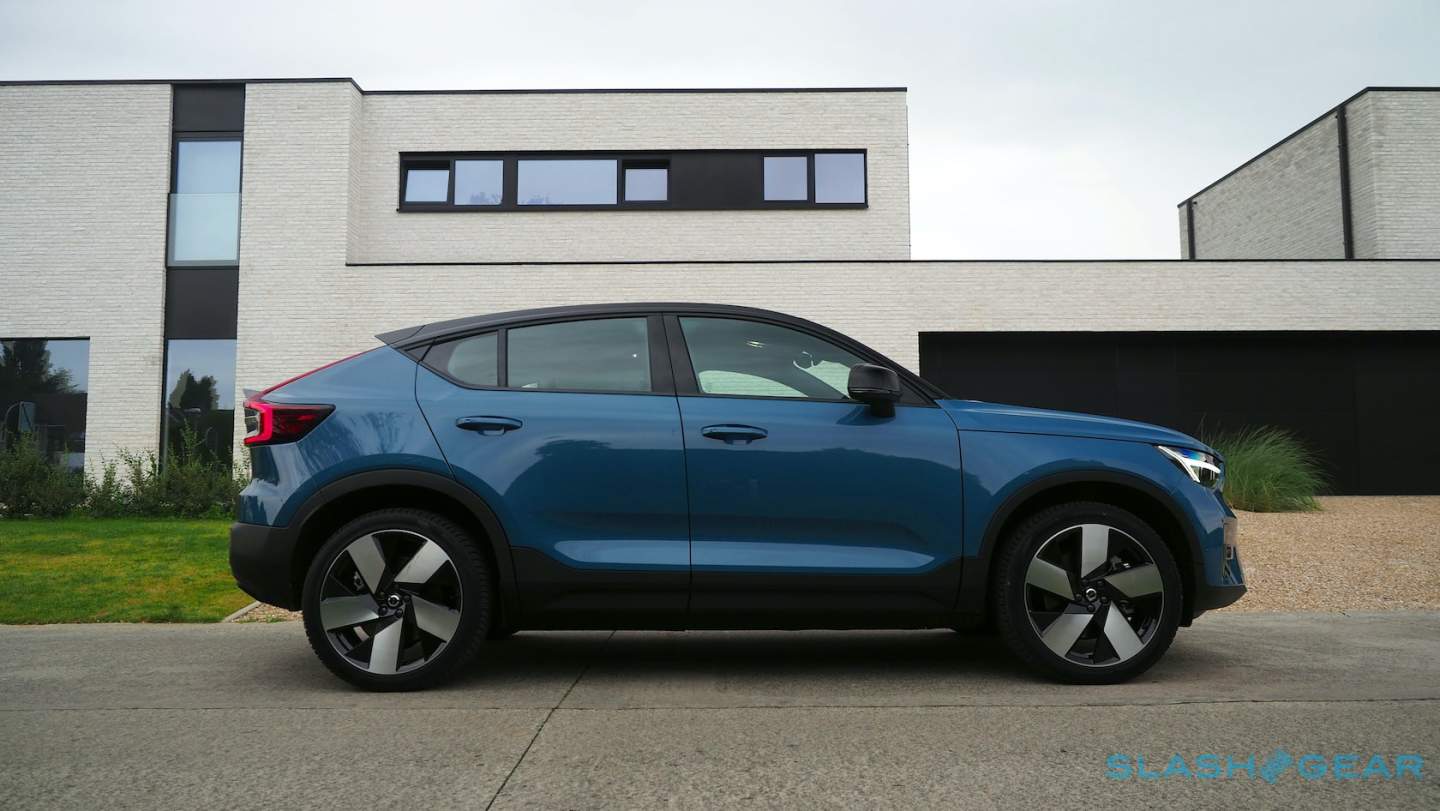 Volvo emphasizes that with its dashing contrast roof and an LED light show. The rear window, for instance, is framed by two vertical light bars; a fun start-up animation sees them and the rear LED light clusters progressively illuminate in turn. At the front, the Thor’s hammer headlamps flank a blanked-out fascia, though sadly the US market won’t get the clever Matrix LED headlamps that are road-legal in Europe. 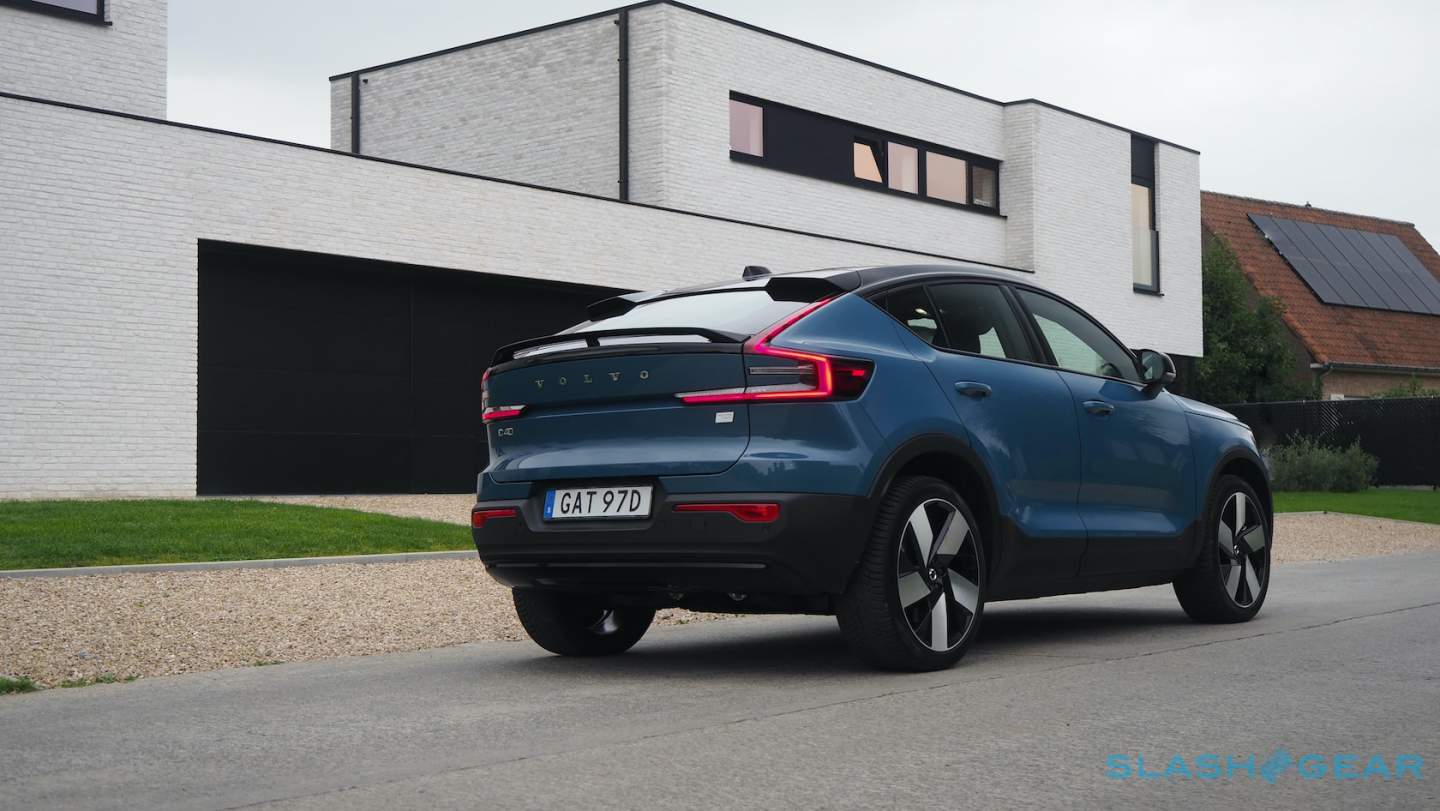 Underneath it all is a now-familiar platform. It’s the third outing for this particular electric architecture, Volvo having used it on the similarly CMA-based XC40 Recharge, and Polestar on the Polestar 2. There are two electric motors – one for the front wheels, one for the rear, for all-wheel drive – with a total of 300 kW (or 402 horsepower) combined. 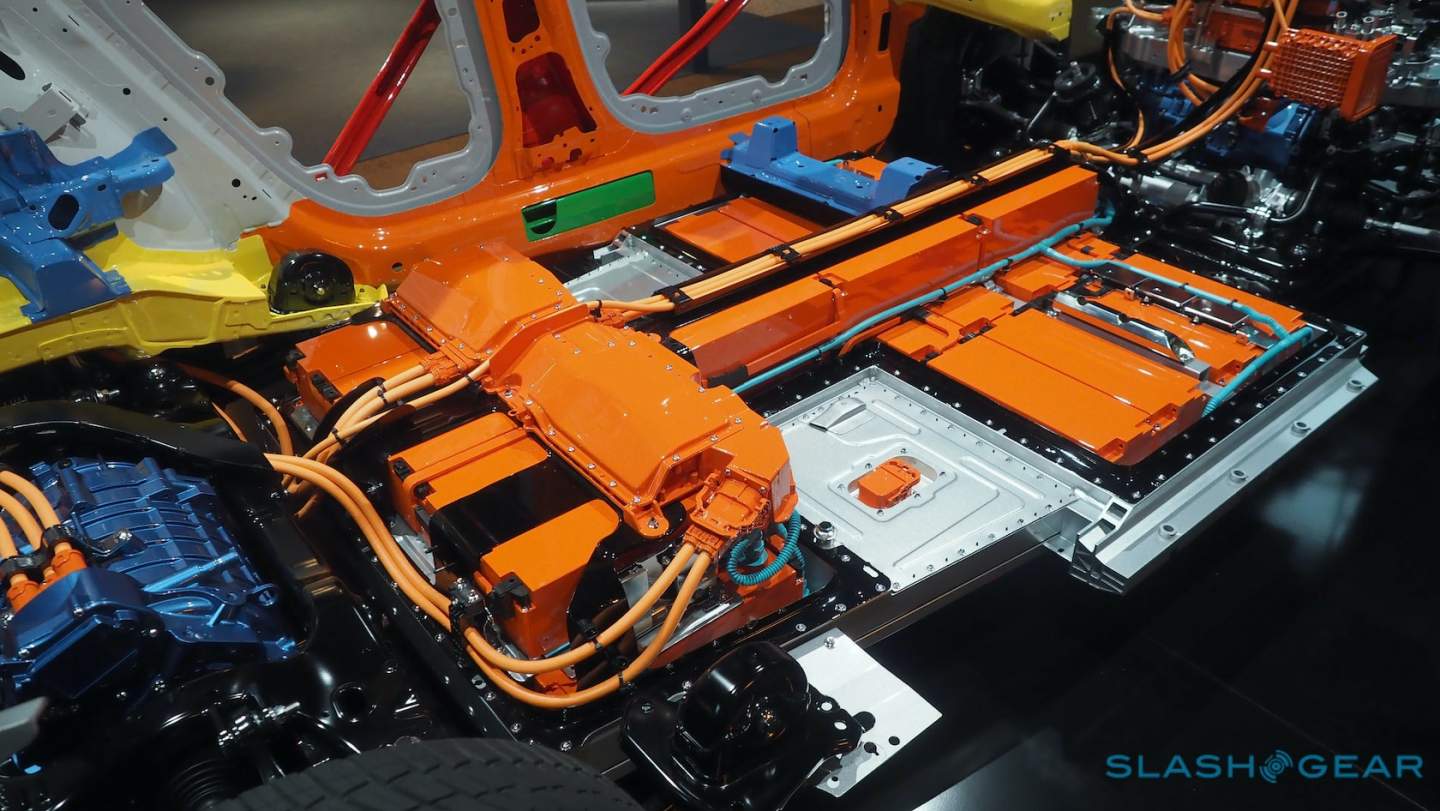 A 78 kWh battery – of which 75 kWh is usable – lives between the axles. It’s not completely flat, Volvo stacking its cells in the middle and under the seats, while leaving gaps for more footwell space. That means that inside, despite there being no driveshaft for it to accommodate, there’s still a tunnel running the length of the cabin like in a combustion vehicle with driven rear wheels. 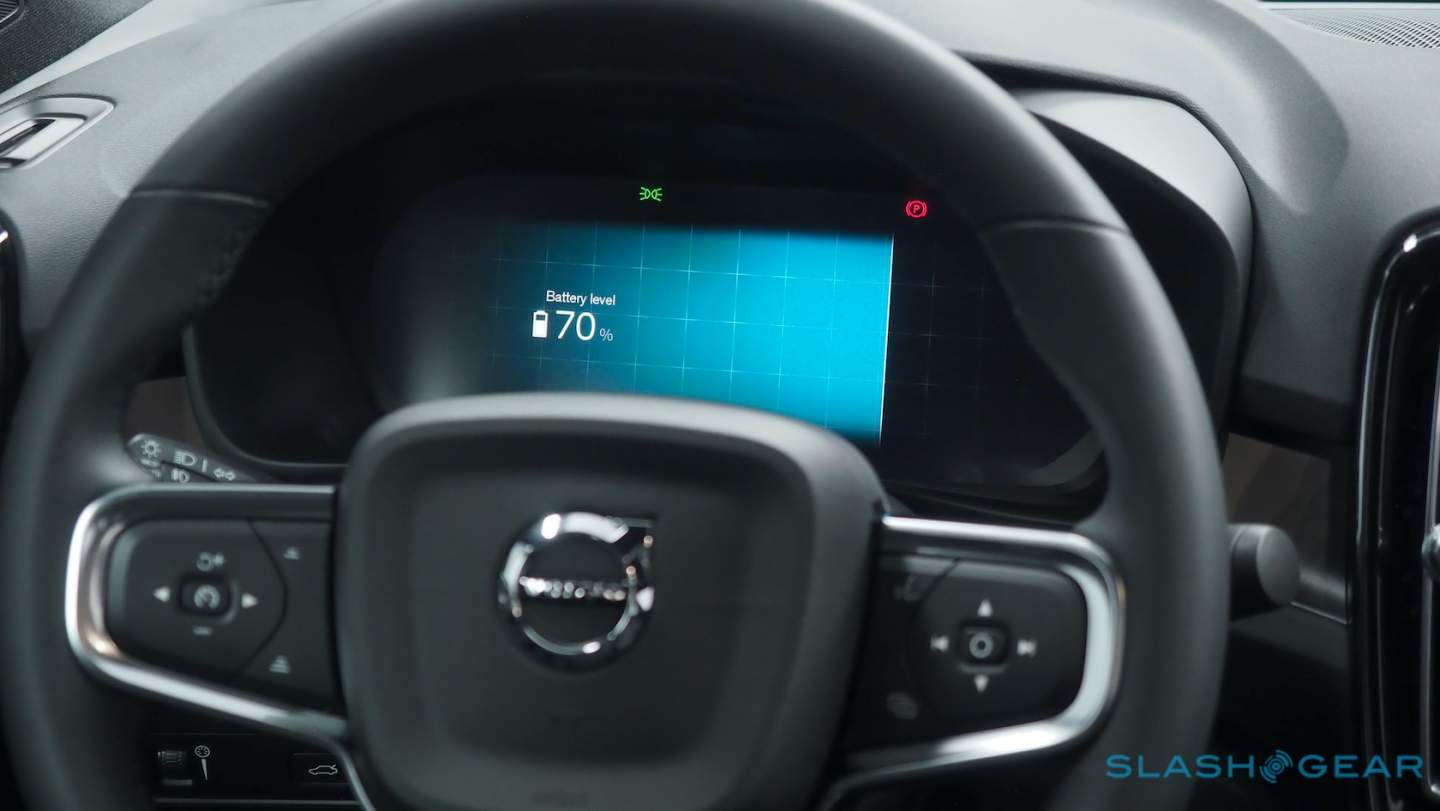 EPA range for the C40 Recharge hasn’t been confirmed yet, though Volvo is expecting 225 miles or thereabouts. That would put it in the middle of the CMA trifecta: the more upright XC40 Recharge manages 208 miles, while the Polestar 2 Dual Motor coaxes out 233 miles. For recharging, there’s 150 kW DC fast charger support, which can take you from 10-80 percent in 37 minutes.

They’re not segment-leading numbers, though it looks like they’ll be realistic ones. Over the course of a 72 mile trip, with a mixture of urban, highway, and back-road driving, the battery dropped 32-percent. Sure enough, a little back-of-the-envelope math suggests that works out to 225 miles of range overall on the dot. We’ll know better after more time with the EV. 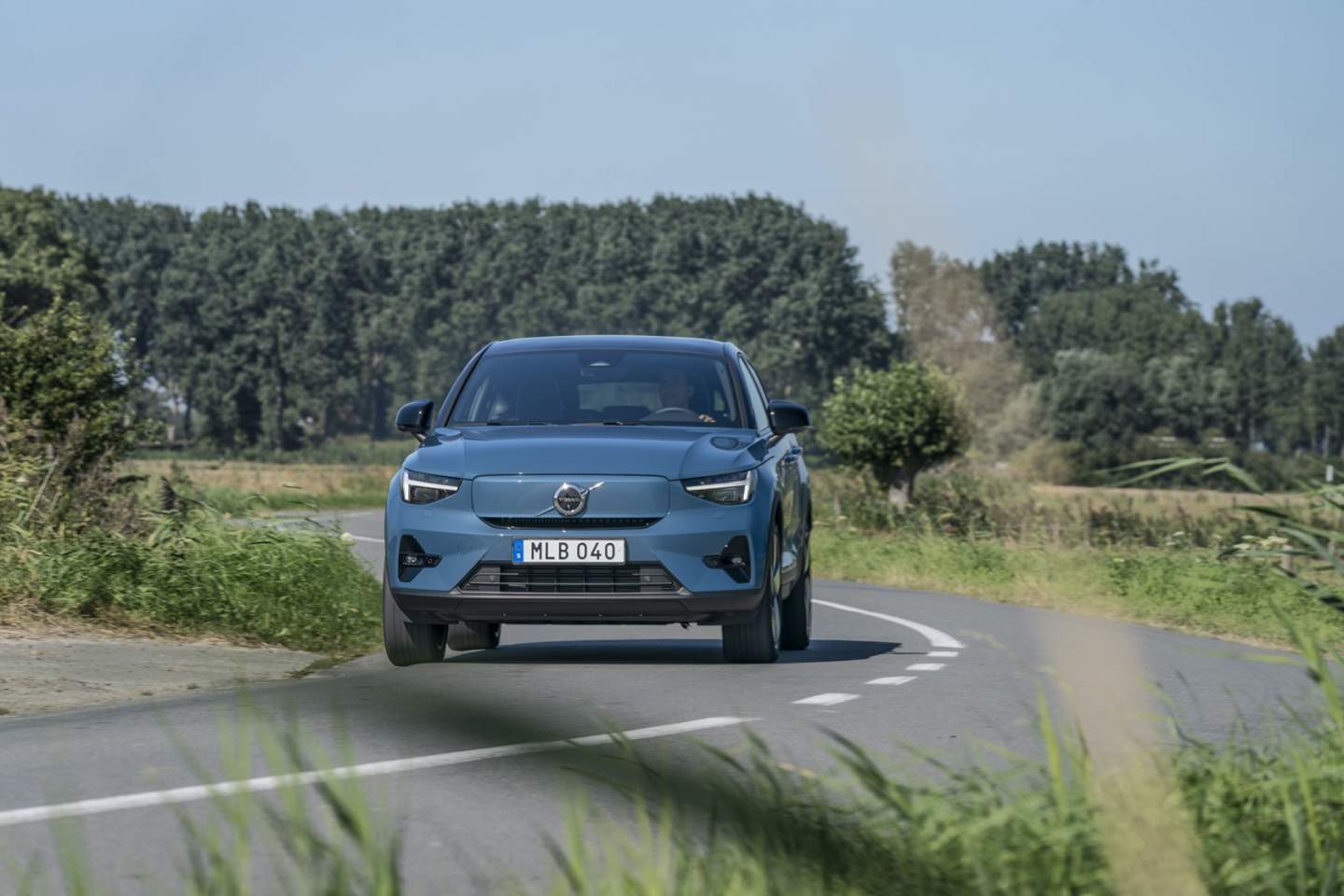 For Volvo’s target audience here, that’s probably plenty. The race to headline range figures may still be thriving, but the reality is that most drivers have fairly conservative requirements before they can top-up either at home or at an office. Yes, I’d love to see Volvo offer a 280+ mile option, but that may need to wait for a larger EV (and yes, that’s coming too).

On the road, you’ll be unsurprised to hear that the C40 Recharge feels a whole lot like its crossover cousin. The suspension, steering, and everything else is carried over; tweaked, of course, but largely the same. That’s no bad thing. 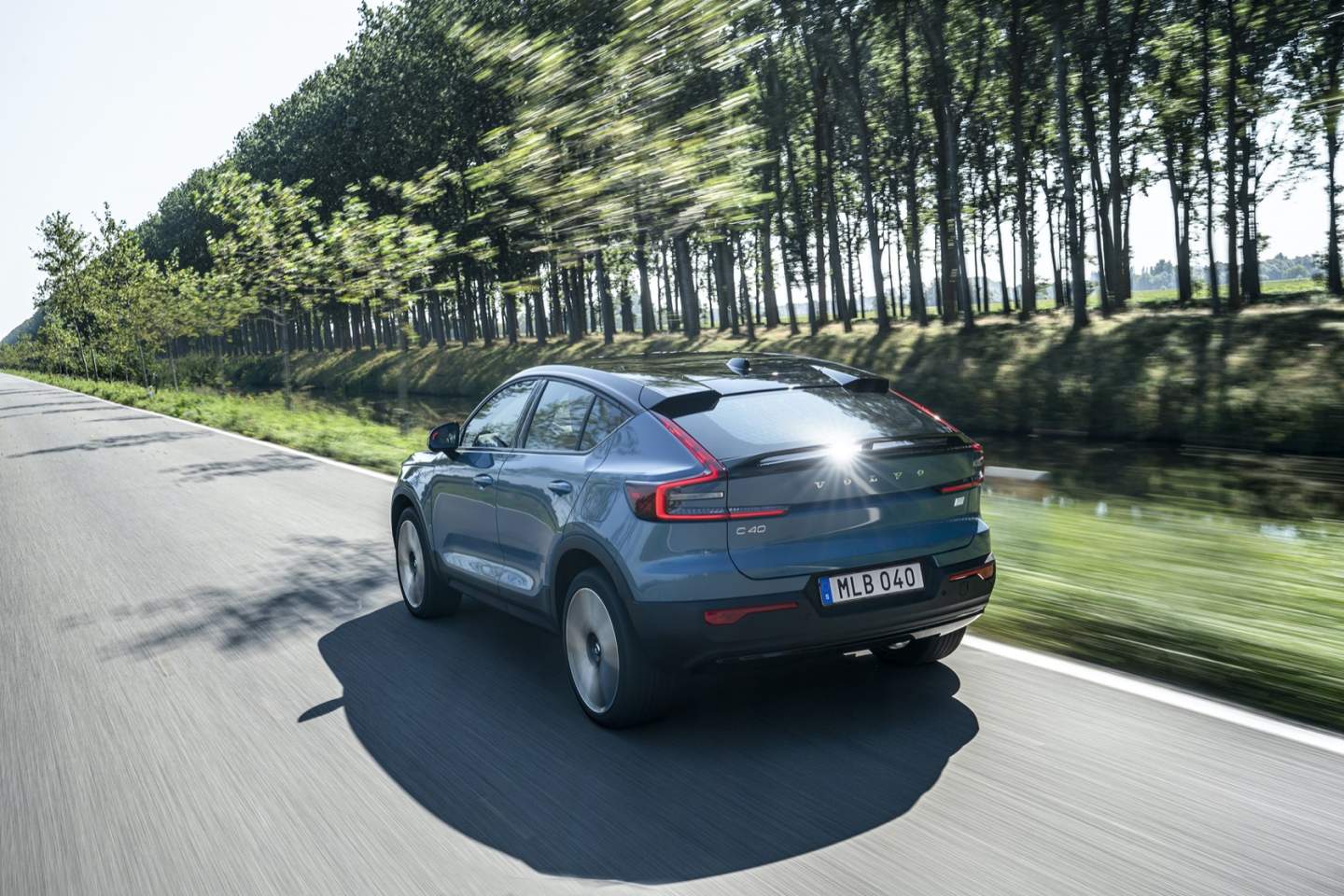 Volvo doesn’t mess about with “normal” and “sport” modes: the only option there is an Off-Road setting for situations with reduced traction. The rest of the time you have the full impact of its twin motors, 0-60 mph arriving in a speedy 4.5 seconds. Yes, there are faster EVs out there, but with 487 lb-ft of torque arriving from the first instant this is definitely a fast car, zipping through gaps in urban congestion and surging between lanes at highway speeds.

It feels stable and eager, and altogether very easy to drive. The one-pedal braking is fairly aggressive, capable of bringing the EV to a complete halt without you needing to graze the regular brakes. You can switch it off in the settings, but not adjust its severity. An option to switch to heavier steering feel is there, too, though I didn’t notice a huge difference between the two levels. 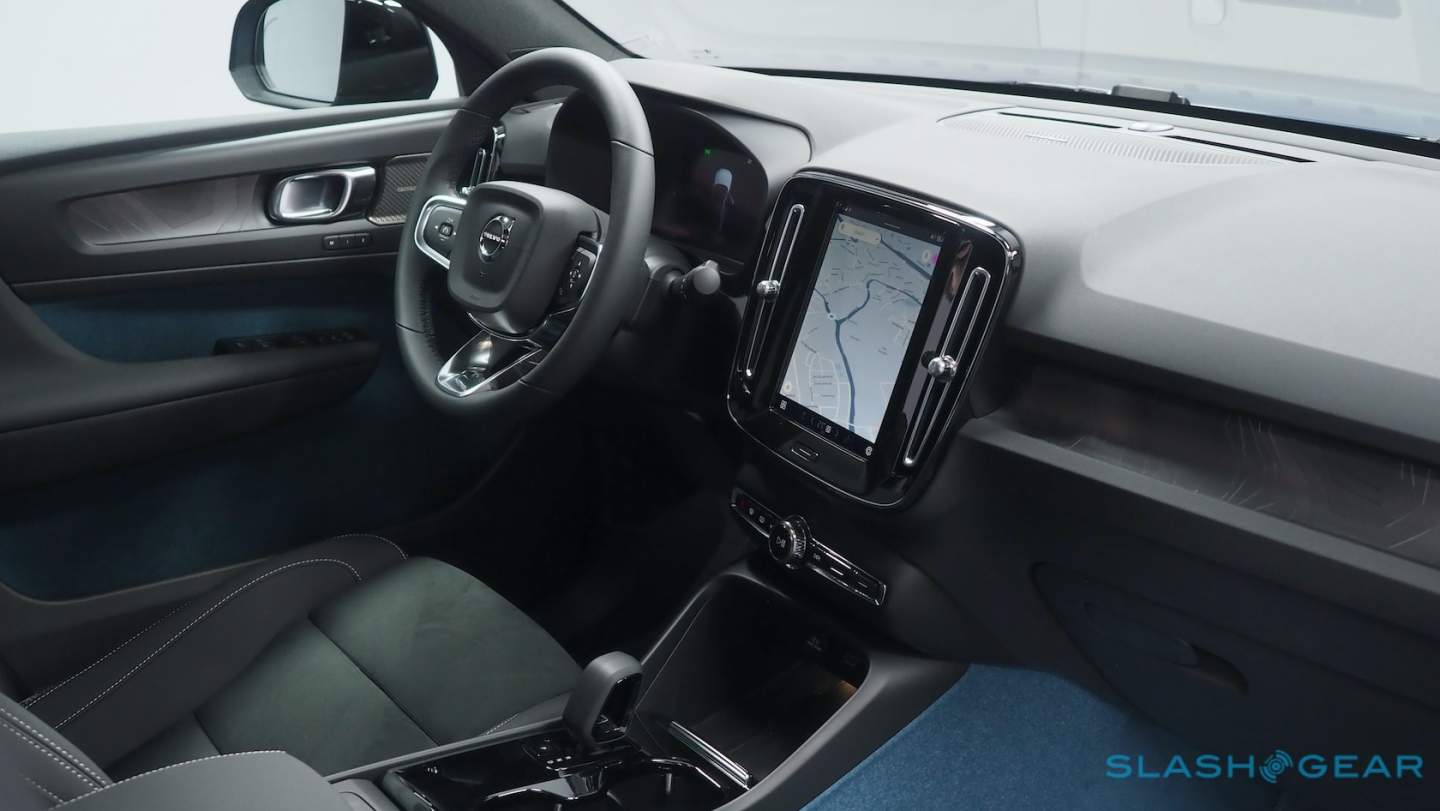 The rest of the cabin feels familiar, though with some tweaks along the way. The driver gets fully digital instrumentation, and there’s a 9-inch infotainment touchscreen running Android Automotive OS. You get Google Assistant voice control; Google Maps for navigation, with some slick EV integrations that can predict your state of charge by the end of a trip as well as factor in stops for a top-up along the way if required; and the Google Play store for third-party apps. Software isn’t exactly overflowing in there yet, but it’s still early days for the platform. 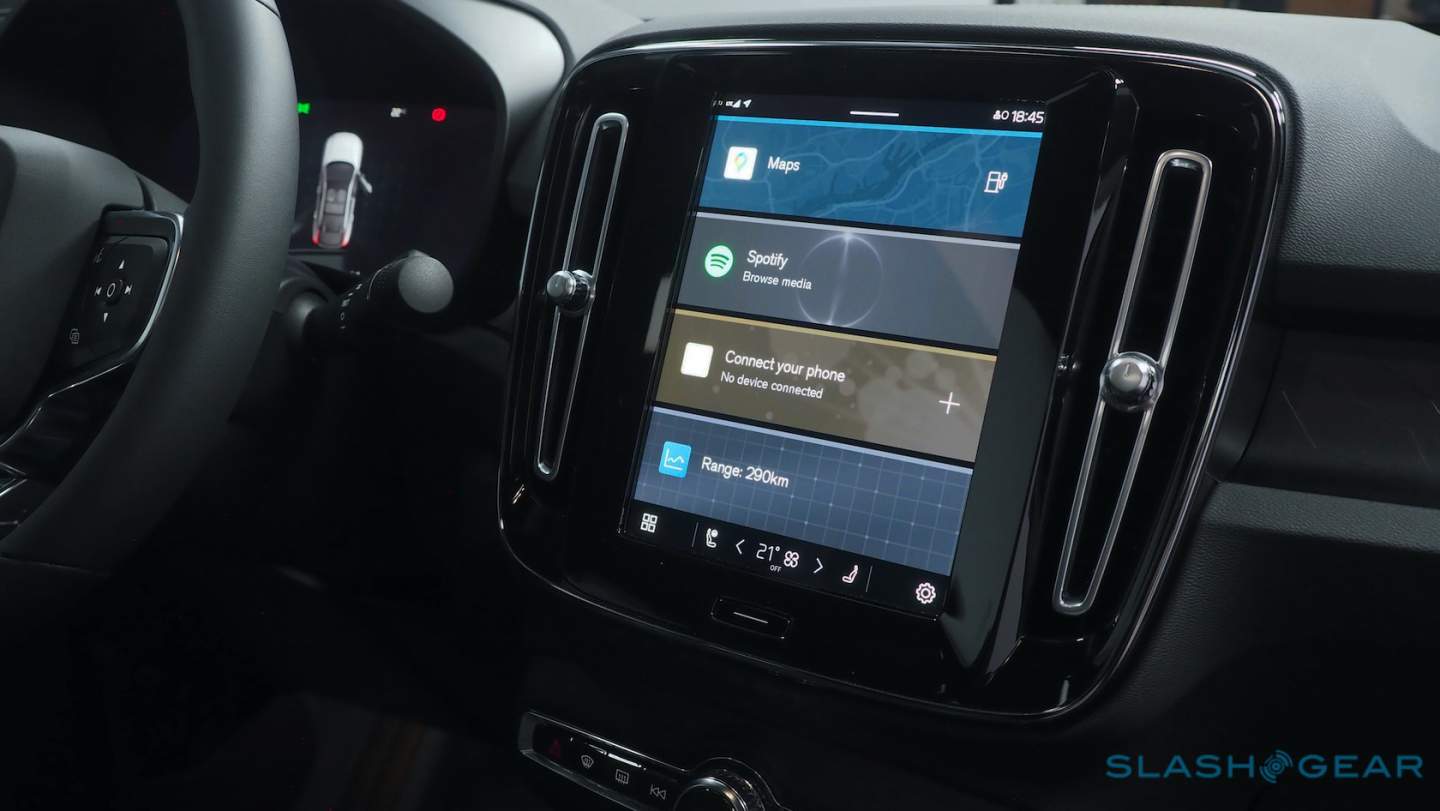 The most conspicuous elements to the cabin are the backlit inlays in the dashboard and doors, and the carpeted door panels. The former are made of recycled plastic, and are in fact sections of a stylized topographical map of a national park in Sweden. It’s a neat alternative to the usual trim pieces, and according to Volvo’s Rekha Meena, senior design manager for color and material, it’s part of the company’s move away from chromed trim, production of which is less environmentally friendly. 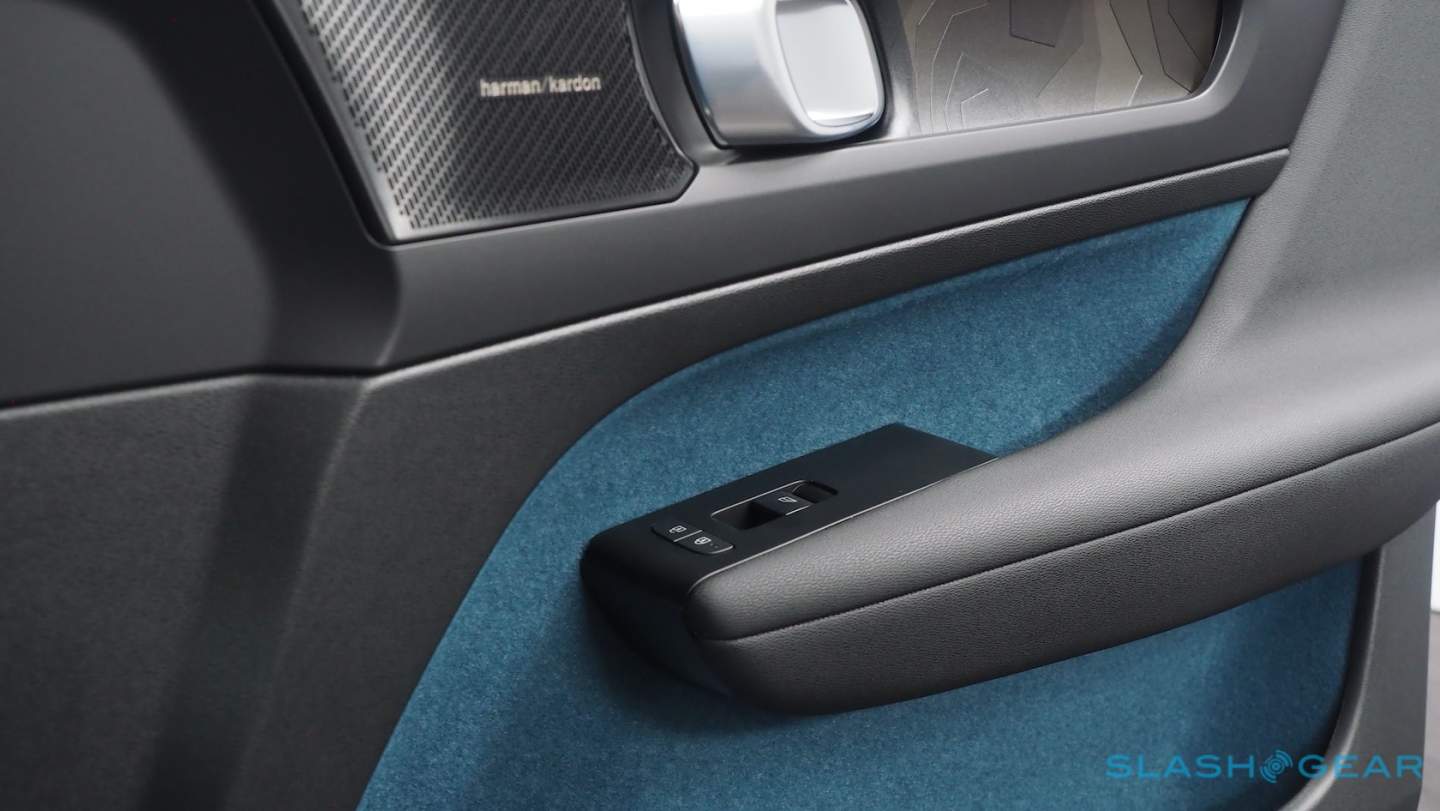 As for the carpet, depending on the exterior color – the C40 Recharge is, in a welcome contrast from Polestar’s array of sober grays and silvers, offered in a few brighter hues, including blue and red – that can be either black or a more striking Fjord Blue. It’s made from recycled plastic bottles, and Volvo has opted to cover more of the doors and footwells with it than you’d usually expect, trimming back the amount of regular plastic needed.

The seats get a pleasingly-textured cloth, again with recycled origins. Nonetheless, for all Volvo has been doing, its push to oust virgin materials is still a work-in-progress. The various dashboard plastics are still the same that the rest of the auto industry has been using, though Meena says that efforts to replace them with greener versions – that, like the other material substitutions, can satisfy the same strict safety and durability standards as the older versions – are underway. 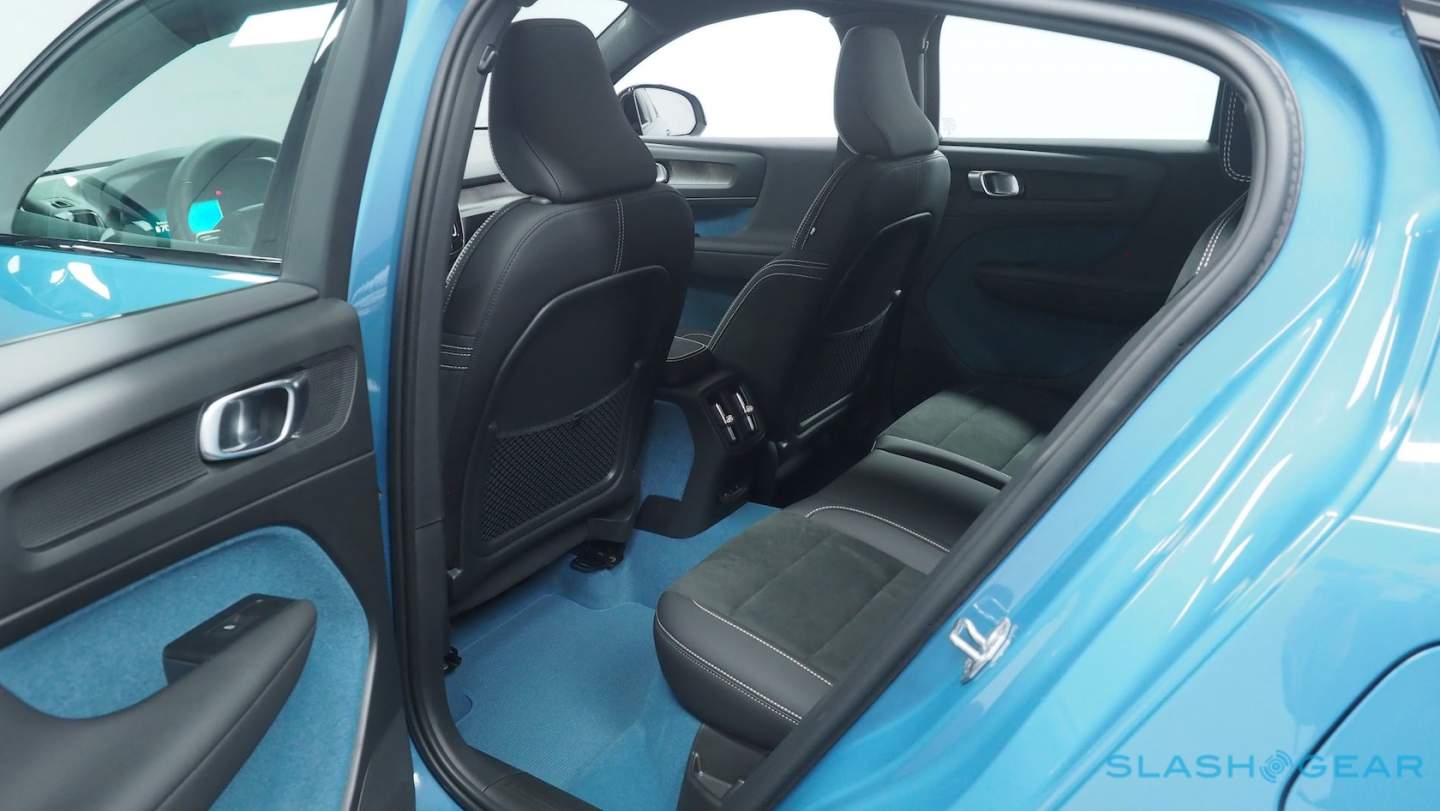 You’ve probably already predicted the C40 Recharge’s primary compromises for its extra splash of style and aerodynamic slipperiness. The sloping roofline eats into both rear seat headroom and cargo capacity, with passengers over six foot in the back likely to feel a little cramped. The trunk holds 14.6 cu-ft with the rear seats up, while a diminutive front trunk adds 0.7 cu-ft more.

Electric-eager couples with no taxi duty to observe may not figure all that to be too great a problem day to day, though the significantly reduced visibility through the rear hatch is more annoying. The sensation of peering through a mailbox is compounded by the angles involved: sitting high enough for the best front visibility, my view of the traffic behind me was about up to their grilles. Thankfully the side mirrors are large, but this is one of those times that a rear camera mirror might actually make sense. 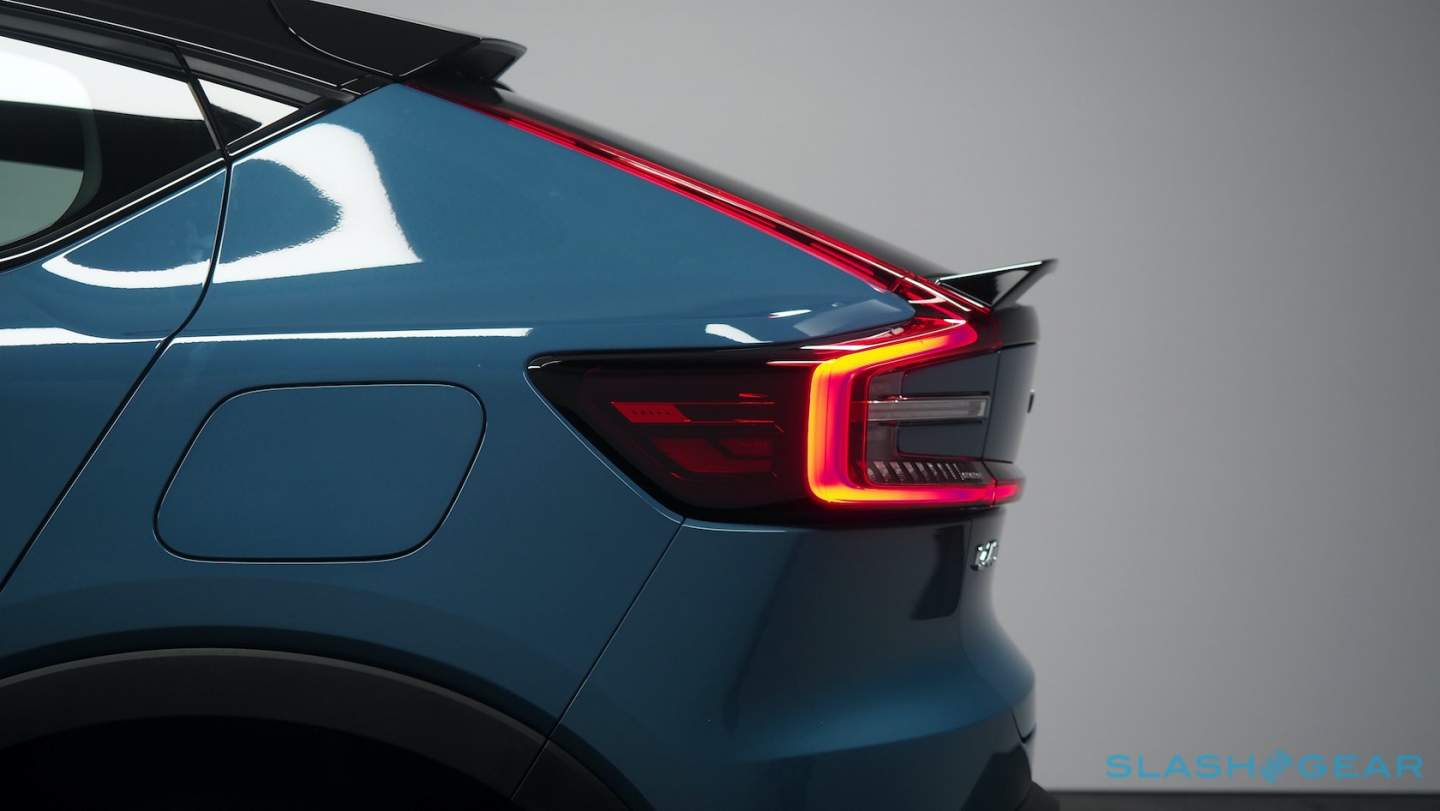 Volvo, though, does load in the extras for its slight premium. Perhaps most important – depending on your local climate – is the heat pump, something Polestar recent began offering but as a paid option. It’s standard on the C40 Recharge, and can potentially make a 10-15 percent difference in range in cold conditions. 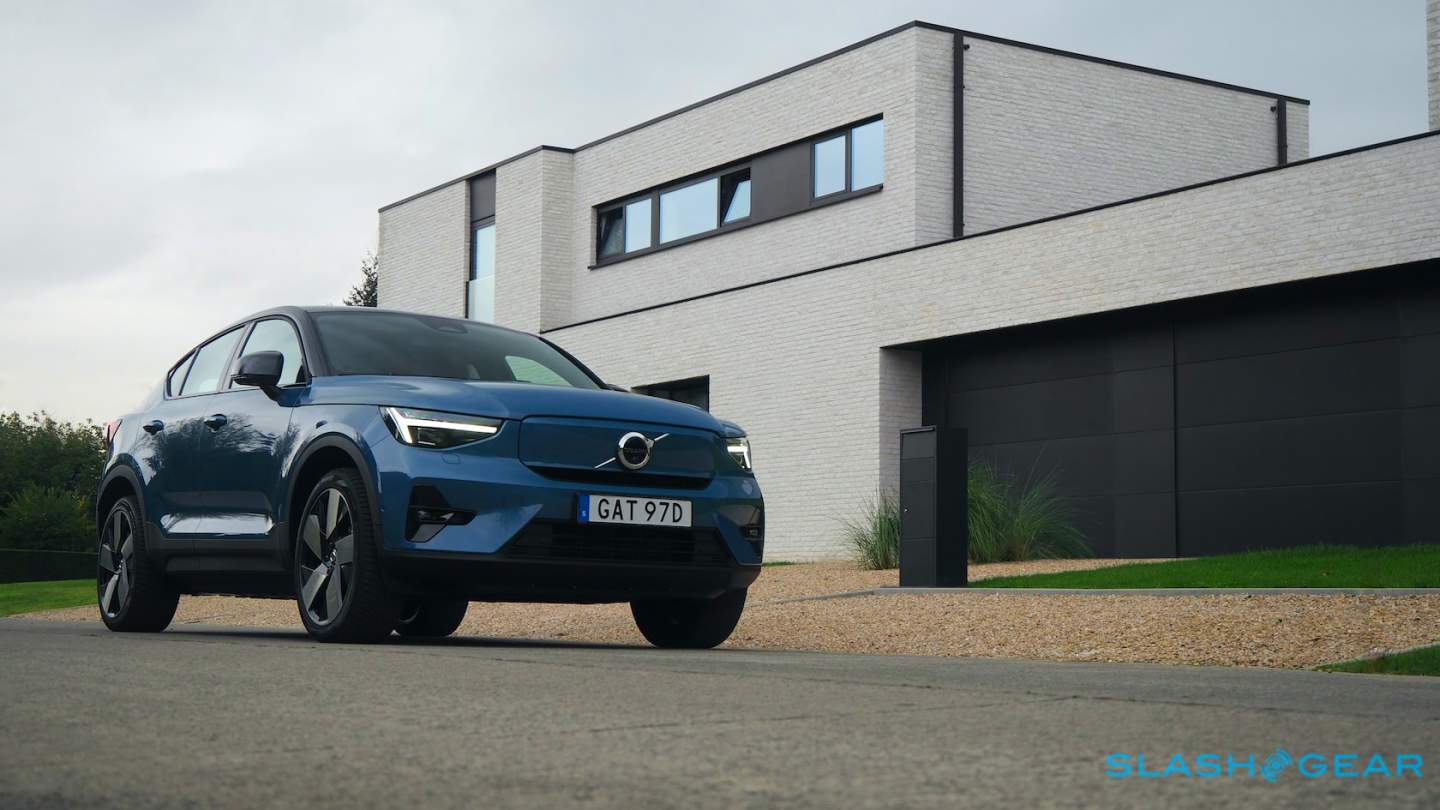 A panoramic roof is standard too, as is Pilot Assist hands-on driver assistance for the highway, a Harman Kardon audio system, heated front and rear seats, 20-inch wheels, keyless entry and a power tailgate, 360-degree camera, wireless phone charging, power-folding rear headrests, and front & rear park assist. You get 4 years of digital services access, a 4 year/50,000 mile warranty, 8 year/100,000 mile battery warranty, 4 years of scheduled maintenance, and 250 kWh of Electrify America charging to use in the first three years. That works out to about 4-5 recharges.

Volvo could’ve saved itself a headache had it made its second all-electric model larger: explaining an XC60 Recharge would be a lot easier than trying to justify the C40 Recharge alongside its XC40 sibling. It’s a platform issue, of course, and anything bigger will have to wait for the new SPA2 architecture expected to underpin the XC90 replacement due for its big unveil next year. 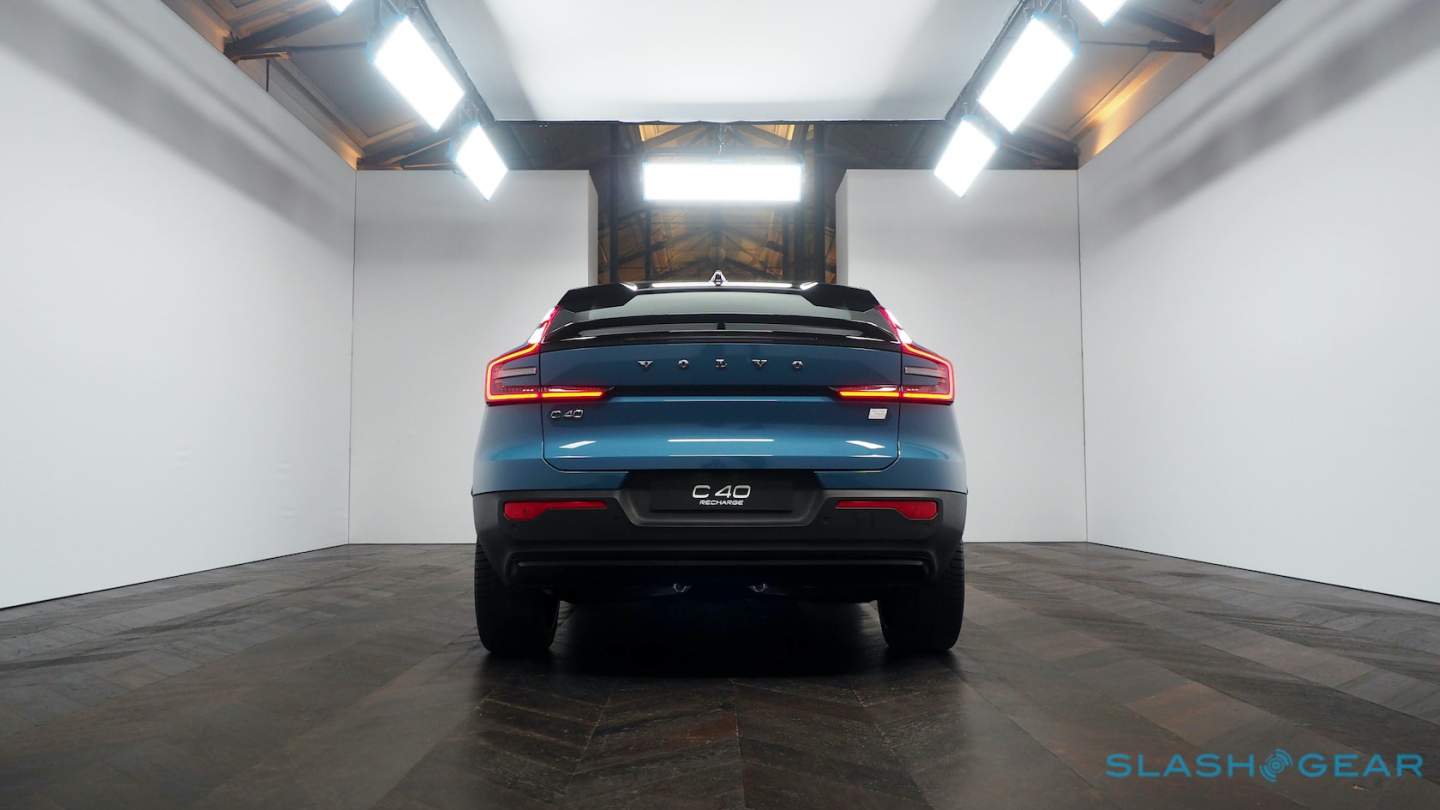 The broader reality is that Volvo has plenty of different variations on combustion cars and SUVs right now, and all of those need to be replaced by electric versions if the automaker is to meet its 2030 goal of being EV-only. And, frankly, if BMW can have an X3 and an X4, or if GM can have what seems like a thousand minutely-different variations on the same SUV platform across its brands, then the idea of Volvo having two expressions of a shared architecture seems much less strange.

I suspect part of it is that we’re still used to seeing EVs in isolation: outliers among the gas vehicles. Eventually that will change, and fairly soon given the rapid rate at which we’re seeing just about every automaker announce and launch new, zero-emission models. The 2022 Volvo C40 Recharge isn’t the electric vehicle for everyone, but then again it doesn’t need to be. It’s a stylish, compelling crossover that will suit some drivers just fine, and if it doesn’t they won’t have long to wait for a whole lot of other options.