It’s unfair to say that Volvo took the easy route in developing the 2021 XC40 Recharge, the all-electric version of its popular subcompact SUV. Sure, it may be built atop the same Compact Modular Architecture (CMA) platform of its gasoline brethren – and, indeed, the same architecture resting underneath its Polestar 2 cousin – but the XC40 Recharge’s biggest triumph is how it seamlessly blends with urban traffic without eliciting curious “is that electric?” stares from passersby and other drivers.

It’s a genuine Volvo to the core, and that includes styling that doesn’t stray too far from the gasoline XC40 at first glance. Apart from its blanked-out front grille, model-specific Recharge badging, and the lack of conventional tailpipes, Volvo’s first all-electric SUV has the same handsome proportions and as we’ve already come to appreciate. Other EVs may be more eye-catching, but I suspect the XC40 Recharge will age more gracefully than they do. 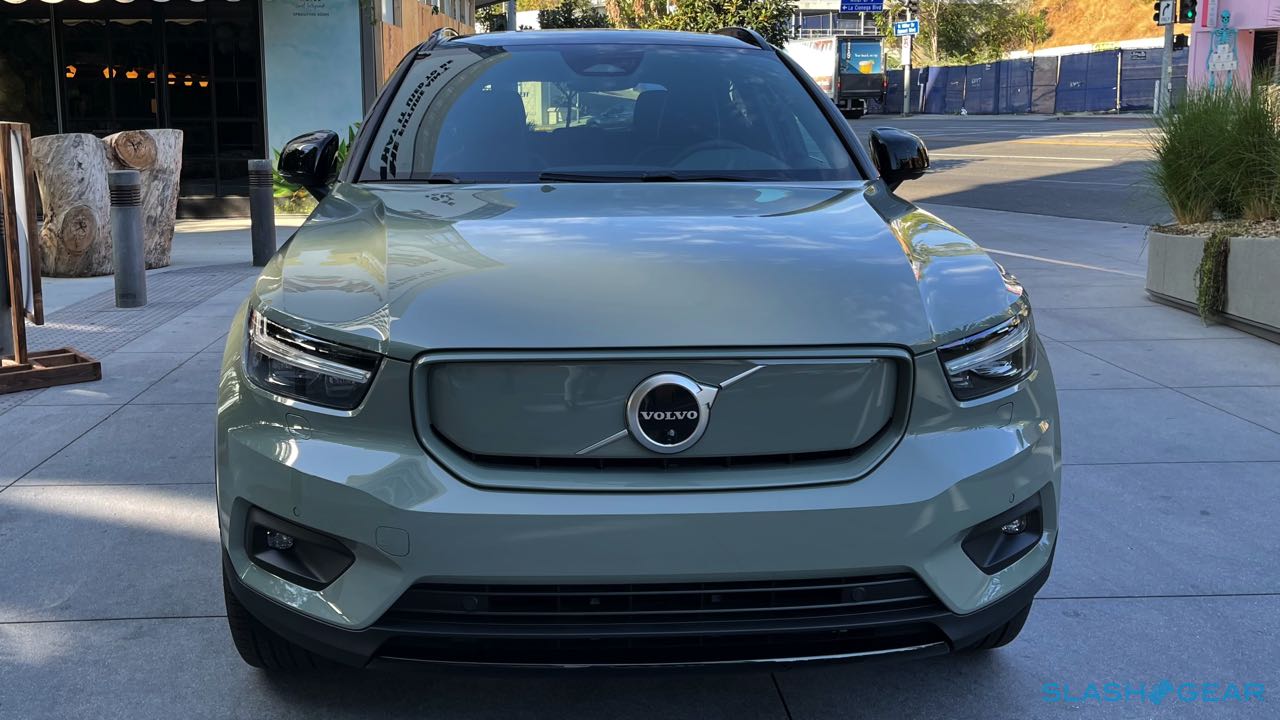 Inside, it’s a similar story with the same dashboard layout and switchgear as the regular XC40. The most noticeable difference is the absence of a traditional tachometer in the instrument cluster. In its place is a new power-flow meter befitting of an electric car.

Like the Polestar 2, the XC40 Recharge uses a dual-motor system. It has a single electric motor at the front, and then another at the rear axle, to deliver all-wheel traction. Each electric motor can pump out 201 horsepower, for a total of 402 horsepower at your disposal. 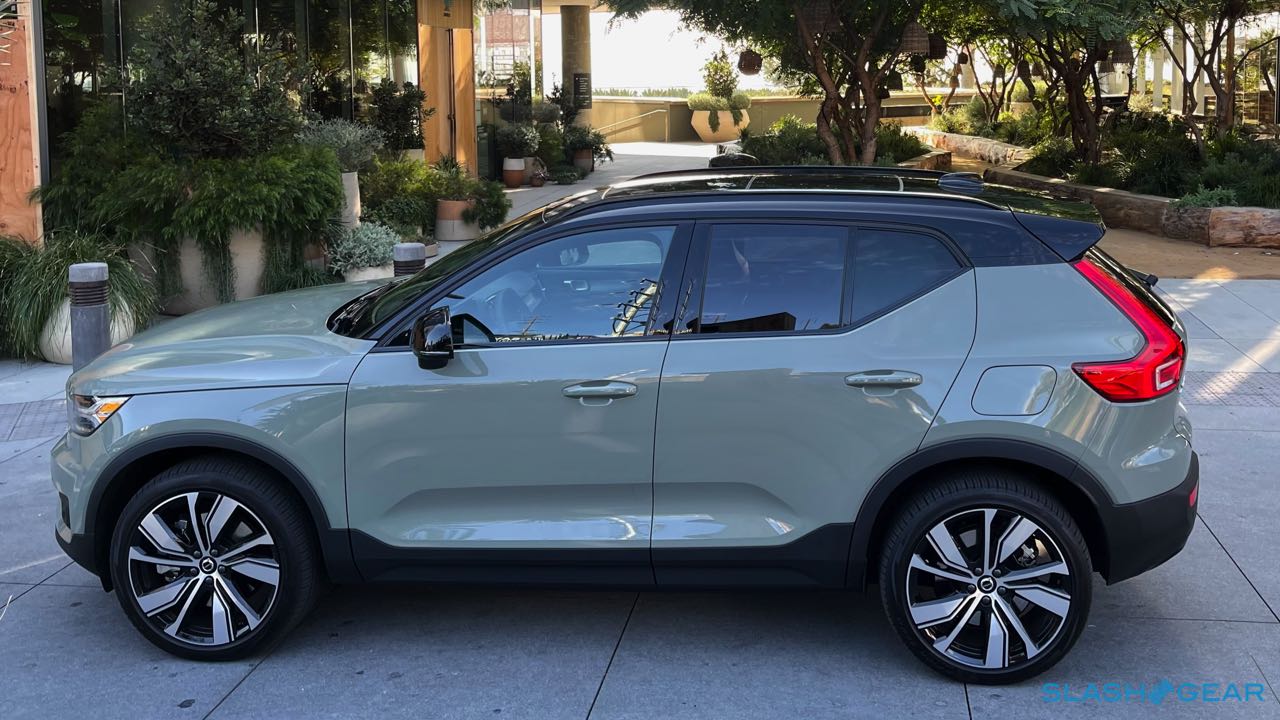 I spent most of my seat-time in downtown LA, where I quickly came to appreciate the e-SUV’s zippiness. There’s a sense of potency, yes – you do have upwards of 400 horsepower on tap in a relatively compact footprint, after all – but power is delivered in a calm and urban-like relaxed manner.

It’s not so much about brutal straight-line speed, though if you’re racing against someone at a stoplight then the 4.7 seconds that the XC40 Recharge takes to go from 0-60 mph certainly means the SUV holds its own. For me, though, what stood out was how confidently it negotiated the busy LA traffic (or lack thereof; thanks COVID-19), zipping from gap to gap while always feeling steady and planted. It’s hard not to fall for the instant acceleration from 487 lb-ft of torque; in theory, given enough road, you should reach the electronically-limited top speed of 112 mph relatively quickly.

Also impressive are the traction and grip from its all-wheel drivetrain. I never felt my test vehicle skipping a beat as I purposely enter corners at higher speeds than necessary. There’s a sense of athleticism and agility from its steering that entices you to play a little naughty. 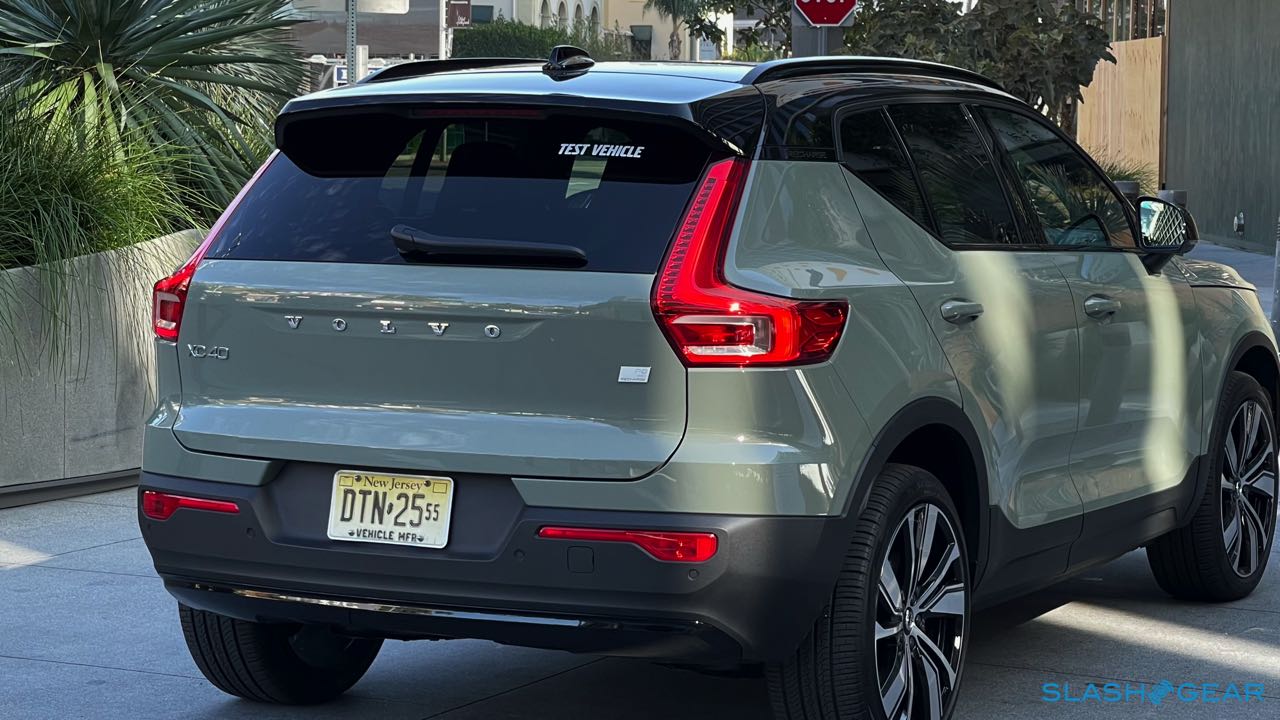 Still, as much as I like how well the Recharge handles the road, the suspension definitely favors comfort rather than skewing too far over to sporty. Curb weight has gained around a half-ton more compared to a gasoline-powered XC40 T5 AWD, but the setup does a decent job of hiding the fact that you’re throwing 4,900 pounds around.

Helping is Volvo’s standard 75 kWh lithium-ion battery pack, which is sandwiched neatly under the cabin floor. With Volvo’s world-renowned penchant for safety, the heavy batteries are encased in a protective aluminum cage; unfortunately the side-effect is that it significantly reduces the XC490’s ground clearance. The drop from 8.3 inches in a gas-only version, to 6.9 inches in the EV, may not be a big deal if you’re a city dweller, but it’s something to think about if you’re planning to go off-roading in your XC40 Recharge. 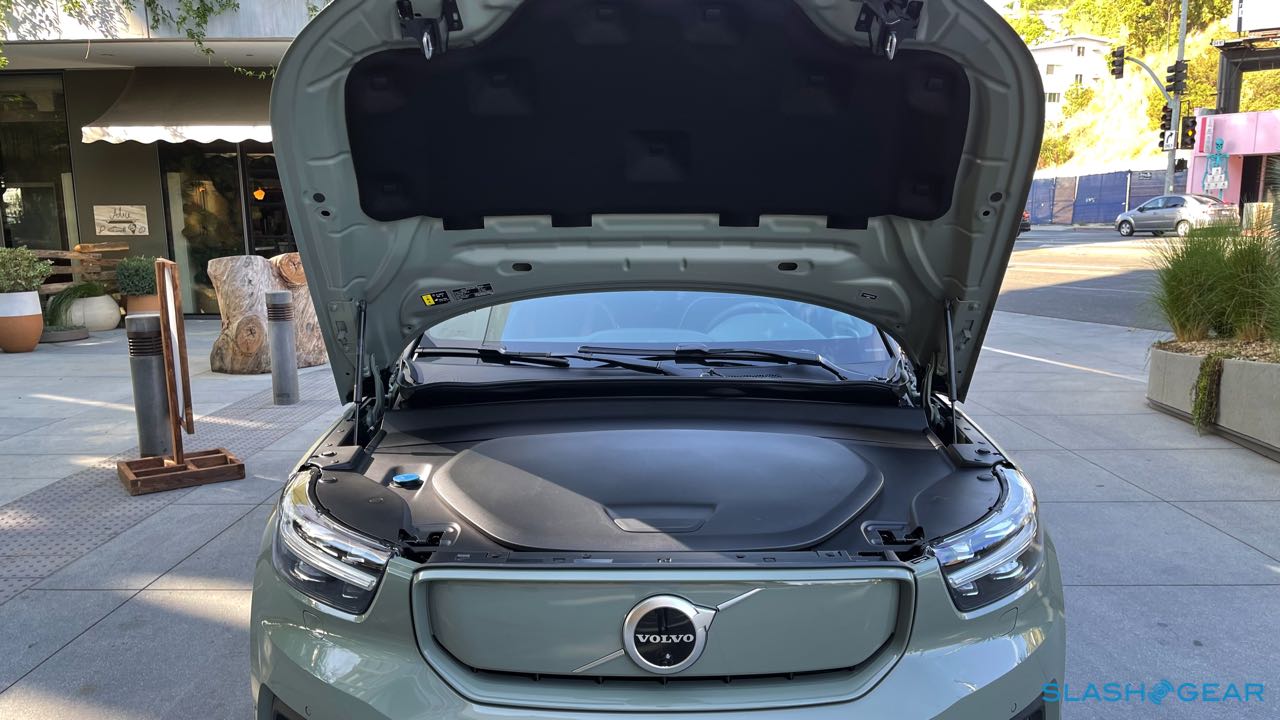 That’s not the only reinforcement, mind. The XC40 Recharge also gets a new, fortified underbody structure in the front, housing the power electronics. It leaves just enough space to spare for a small “frunk” under the hood, although the roughly 1 cu-ft there is really just enough for a small backpack and the provided charging cable.

As a compact family car, the XC40 Recharge is practical to a fault. Besides the front trunk, it offers 16 cubic feet of cargo room in the back, roomy enough for multiple carry-on suitcases. It also has split-folding rear seats – drop them, and you get 47.2 cubic feet of cargo space – and a wide rear bench to accommodate three full-size adults side-by-side. You’ll still get better headroom and knee room in a Tesla Model Y or Audi e-tron SUV, however. 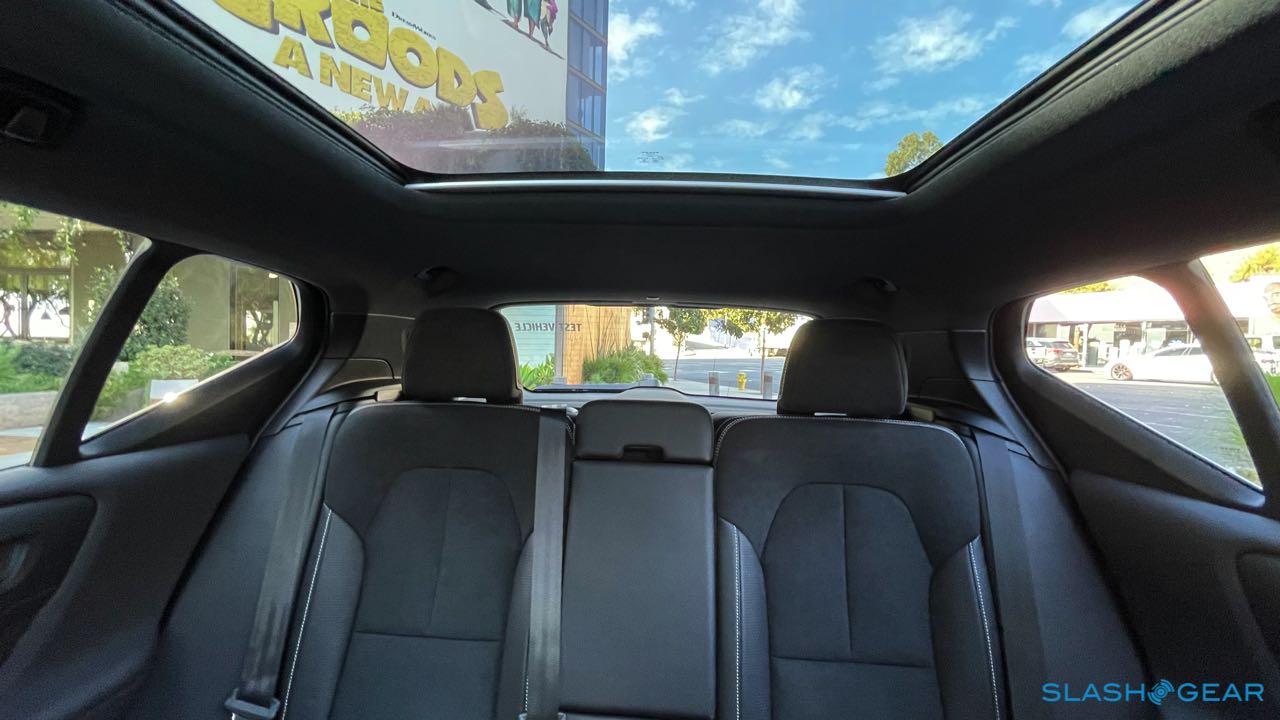 Headroom is better in the front, and you won’t be clashing elbows with the front passenger, either. As expected from a Volvo, the interior has its fair share of Swedish idiosyncrasies. The door pockets are lined with carpet and are big enough to hold a laptop or large bottles of soda, while there’s an innovative pop-up garbage bin between the front seats.

Volvo’s choice of materials is cohesive and sturdy, but if you’re looking for plush and luxuriousness, this might not be the right car for you. Instead, the cabin blends a mixture of soft-touch plastics, leather, and subtle metal inlays. It feels a little more special than the Model Y’s sparse layout, but still falls one or two notches below the Audi e-tron to my mind. 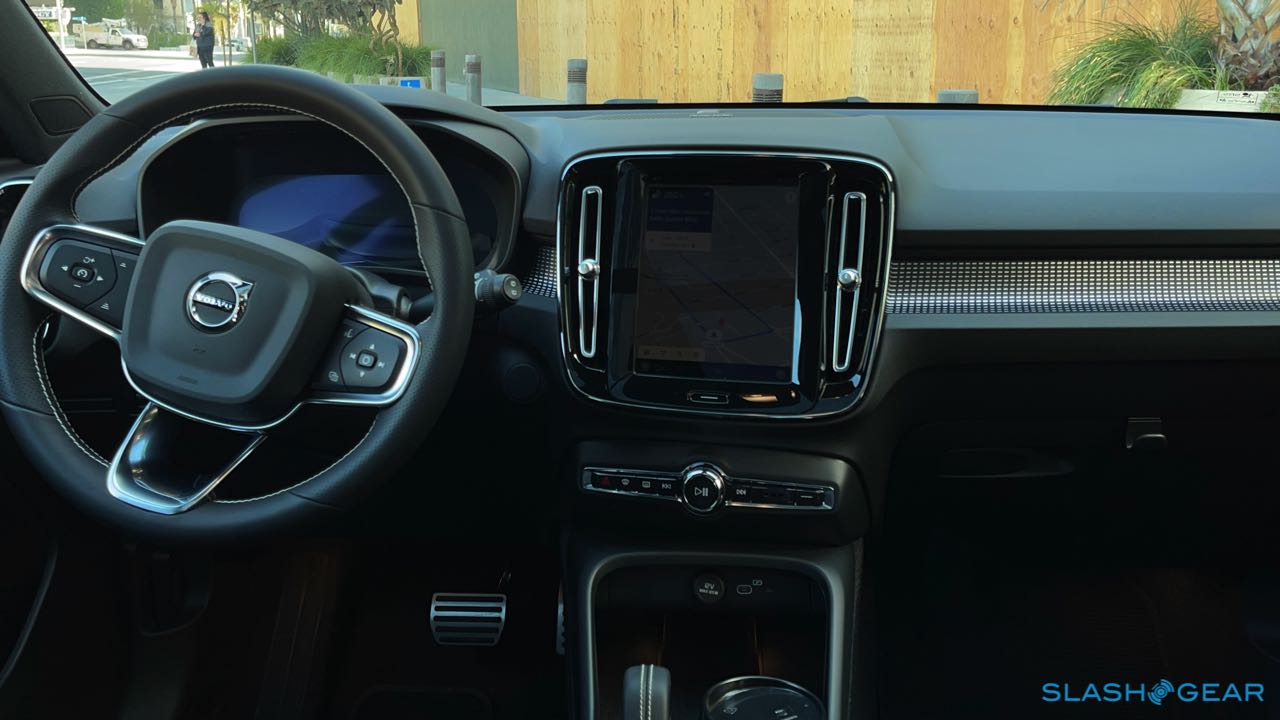 I’m a big fan of the embedded Android Automotive OS powering the standard 9-inch tablet-style infotainment screen. The user interface is crisp and easy to decipher, and being a part-time Android phone user, I far prefer Google’s navigation over what pretty much any automaker installs. Android Auto and Apple CarPlay are not yet available, but Volvo said both would be added via over-the-air updates soon.

After repeatedly getting a taste of the Volvo XC40 Recharge’s on-demand acceleration, it doesn’t take long to figure out where this EV shines the most. Driven casually around the city, it’s as relaxing as spending a quiet afternoon in a Swedish spa. There’s more of that characteristic motor whine than in Audi’s creepily silent e-tron SUV, but not so much as to affect your aura. 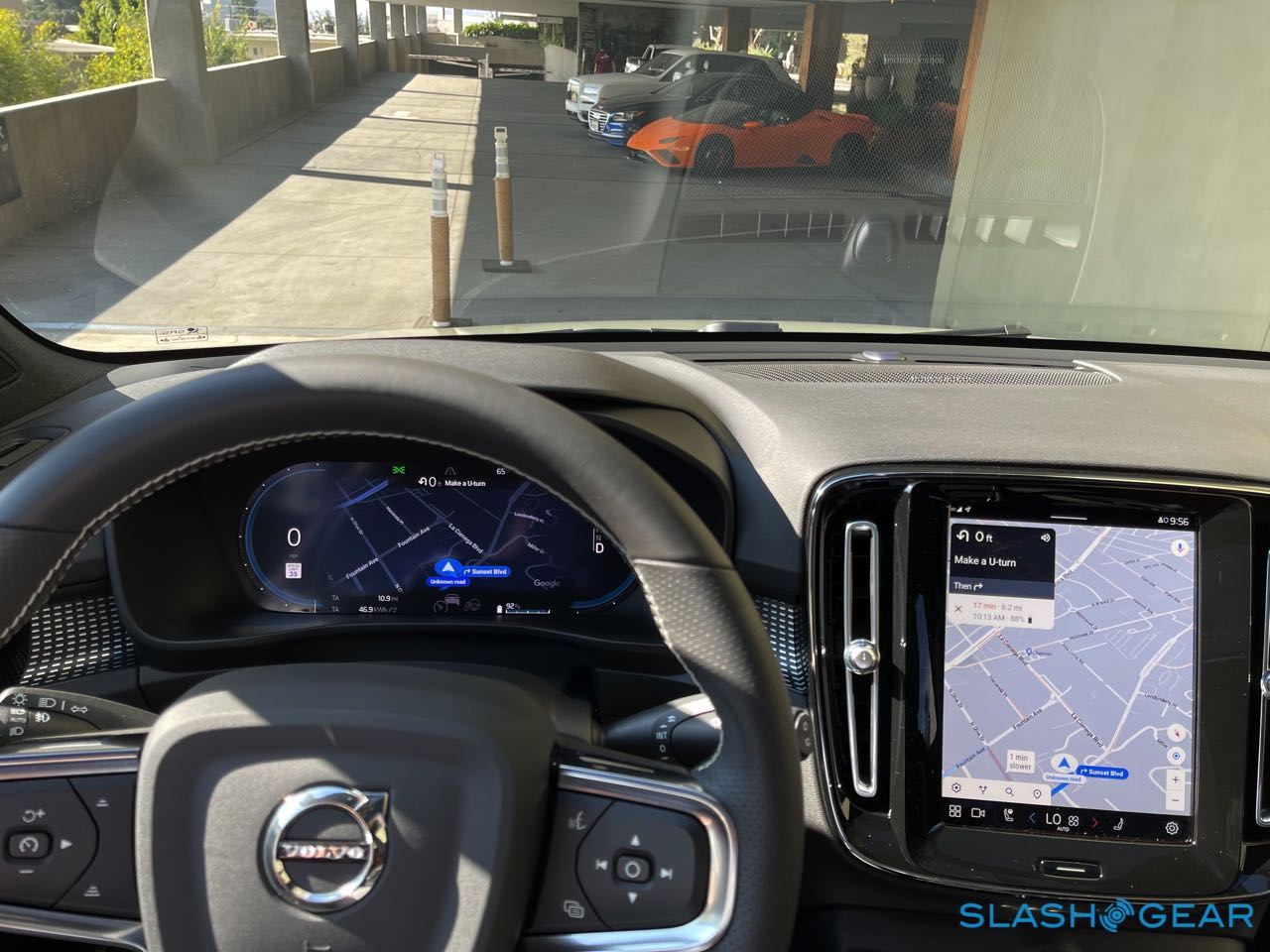 It cruises like a boss, too, with Volvo’s Pilot Assist handling stop-and-go traffic like a pro. Regenerative braking is available for one-pedal driving, but I found I preferred to switch it off and let the brake system decide the mix of friction and regenerative braking.

Drive it serenely, and you’re looking at an EPA-rated 208 miles of driving range. That’s more than enough for most drivers’ needs, though it doesn’t really stand out amid the e-SUV pack. When the juice runs out, the XC40 Recharge supports DC fast-charging up to 150 kW, which recharges the batteries from empty to 80-percent in 40 minutes tops. On the other hand, using the standard 11-kW onboard charger at a Level 2 charger means you’ll be waiting for around 7.5 hours.

By EV measures, Volvo’s first attempt at an all-electric SUV is worthy of admiration, but I see two problems here. First, it costs nearly $20k more than the XC40 with a gasoline engine, with an MSRP base price starting at $53,990 (before federal and state incentives). With that price, the XC40 Recharge aims at the heart of a premium market niche, competing with the Mustang Mach-E, VW ID.4, Audi e-tron Sportback, and the Jaguar I-Pace. 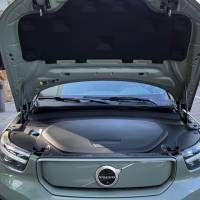 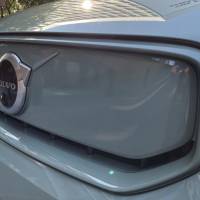 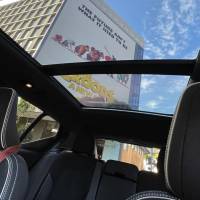 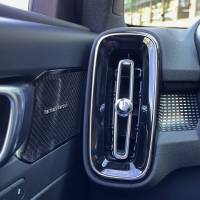 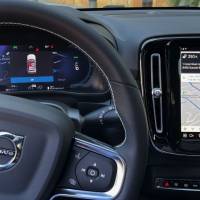 Second, it’s hard to ignore the XC40 Recharge’s platform-mate, the fantastic-looking Polestar 2, which has a base MSRP starting at around $59,900 (before tax incentives). Unlike the XC40 Recharge, the Polestar 2 is more of a driver’s car with nearly-perfect weight distribution and a lower ride height. It promises more range, too, with the EPA saying you could see 233 miles from a full charge.

Of course, there’s no one-size-fits-all solution to the burgeoning EV market. The 2021 Volvo XC40 Recharge is more than a decent attempt, and a bold signifier of Volvo’s intent towards electrification. It’s among the contenders of the World Car of the Year 2021 awards, and should arrive in US dealerships in January of the new year.