Brand your new electric crossover a Mustang, and you set it up for some big expectations. Ford wasn’t making life easy for the 2021 Mustang Mach-E, risking the reputation of its muscle car brand on a category it had yet to prove itself in. “Should it drive like it looks?” That’s the question I couldn’t help but ask, as I faced the Mach-E across an empty pop-up autocross track.

“It’s a requirement,” Darren Palmer, Global Product Development Director of Battery Electric Cars, Ford & Lincoln, insisted to me. “We were thinking, ‘how do we make people want an EV?’ You can’t force electric vehicles on people, and governments around the world are increasing requirements to do that. But that’s not as exciting as making people want something, from the heart.”

That means design that promises performance, and an EV that delivers on that promise too. “Making something beautiful that ties to what they imagine they would like,” Palmer explains, “that’s what Mustang Mach-E embodies.”

Palmer is a founding member of Team Edison, a collection of bright minds that Ford put together to ‘think differently,’ about the automaker’s big push into electrification. “I was there when they drew the first pencil drawings,” he says, “and within an hour, we had an image that is basically the same shape as the Mach-E you see here.”

The silhouette of a muscle car is one thing, of course, but style alone wouldn’t carry the crossover. For Ford, it was an opportunity to apply cutting-edge technology to lessons learned from decades of Mustang tuning. Inside the state-of-the-art driving simulator – “I can put the Ford Flex in there,” Palmer says, “and the simulator will feel like a Ford Flex” – it turned out the batteries in the floor were so stiff that the massive subframes simply weren’t rigid enough to give pony car dynamics. 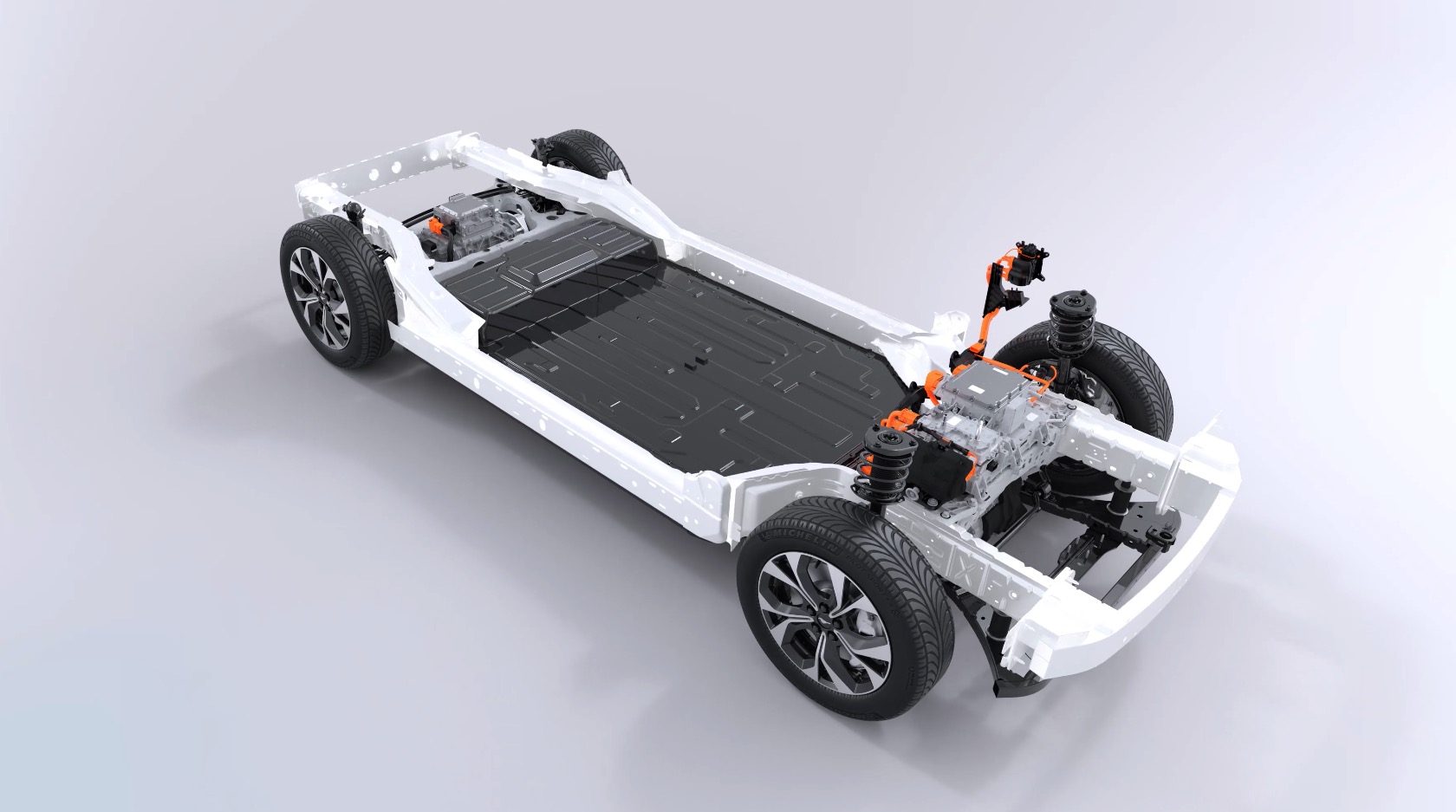 “In the end, what happened was we were developing the Mach-E GT with a stiffer subframe, and it ended up so good that we decided to make the GT subframe standard across the range,” Palmer explained. The GT – currently the most powerful production version of the EV that Ford has confirmed – won’t land until later next year, but all versions of the Mach-E will benefit from its upgrades. From behind the wheel, I can tell you that though it rides like a modern crossover – no Mustang, indeed, has felt more comfortable – it changes direction with the excitement and finesse of a muscle car. 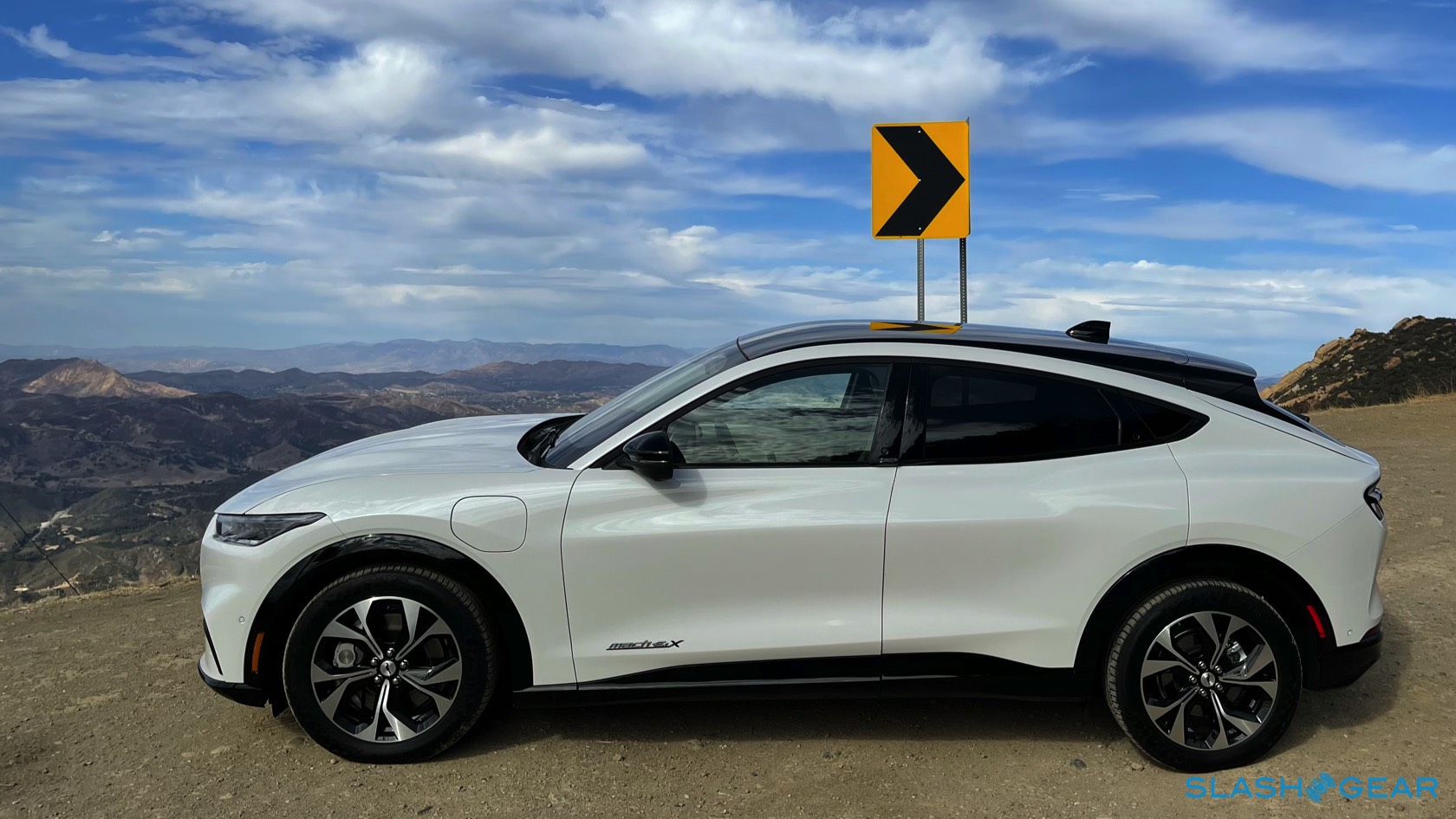 Aiming to hammer that point home early, Ford started me out on the autocross. The Mustang Mach-E has a nearly perfect 50:50 weight distribution, front to rear, and yaws from the center like a proper rear-wheel-drive, V8-powered Mustang coupe. Having spent time in both the Mach-E 4X (Premium e-AWD with an extended range battery) and RWD models on the course, both had no problem kicking out the rear for some mild drifting action. If you’re coming from a traditional pony car, know that with a heavy right foot and some opposite lock you’ll get just the tail-happy reaction you expect.

On the road, of course, you want the driving dynamics to be more composed and in control. Thankfully, while the Mach-E may be willing to wag its tail, it’s not mandatory. 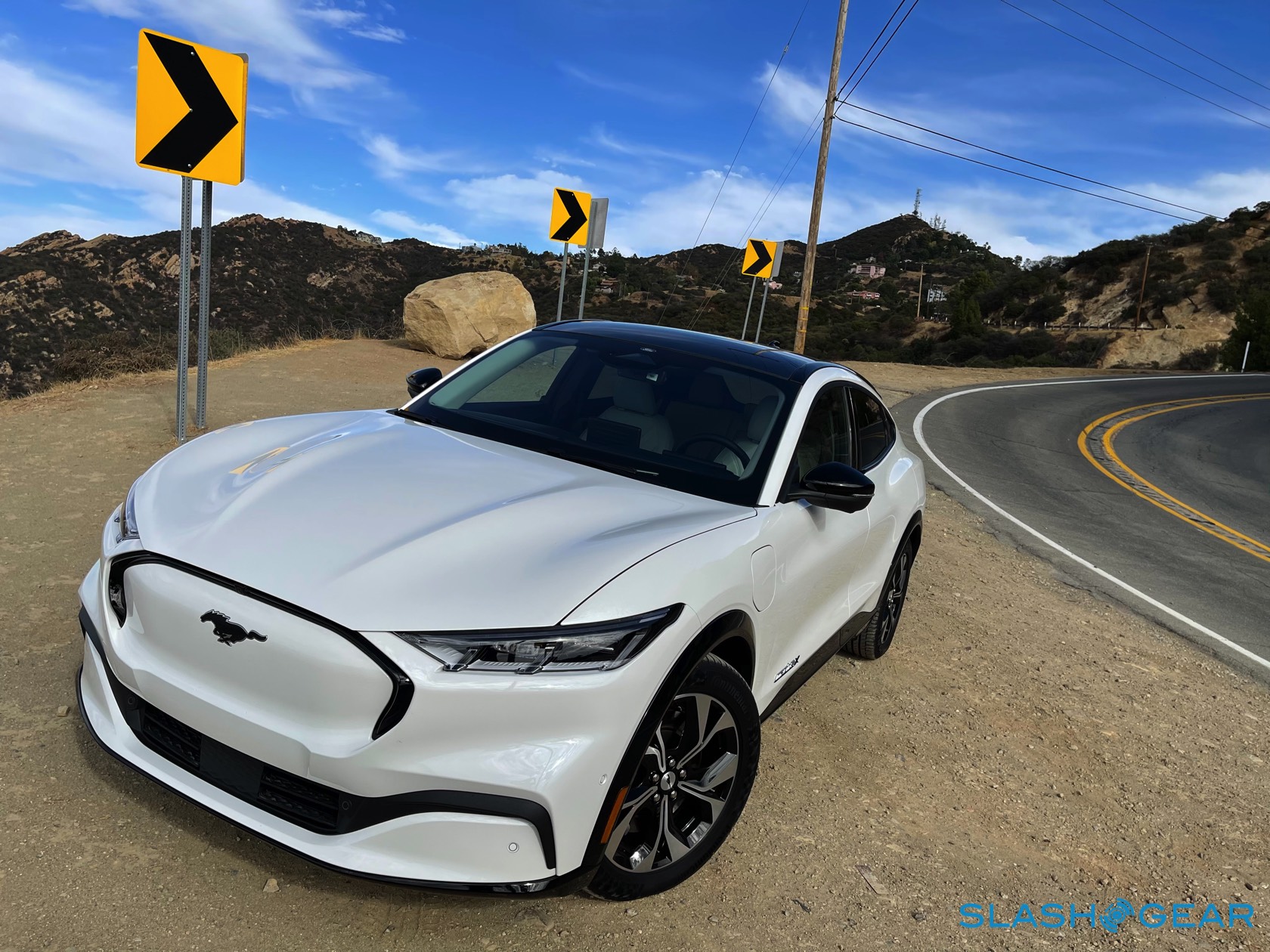 Out on the familiar valley roads high above Malibu, I felt confident enough to push the Mach-E hard through the twists, straights, and switchbacks that make it so popular with eager drivers. Straight-line acceleration is relatively easy, even with the heavy load from the battery pack. That turns out to be a welcome passenger come the corners too, though, lending the Mach-E a lower center of gravity that pays dividends when you need to brake hard to lean into a tight turn or a wide-sweeping fast turn. Much like on the autocross, what stands out is how predictable and controllable it all feels. 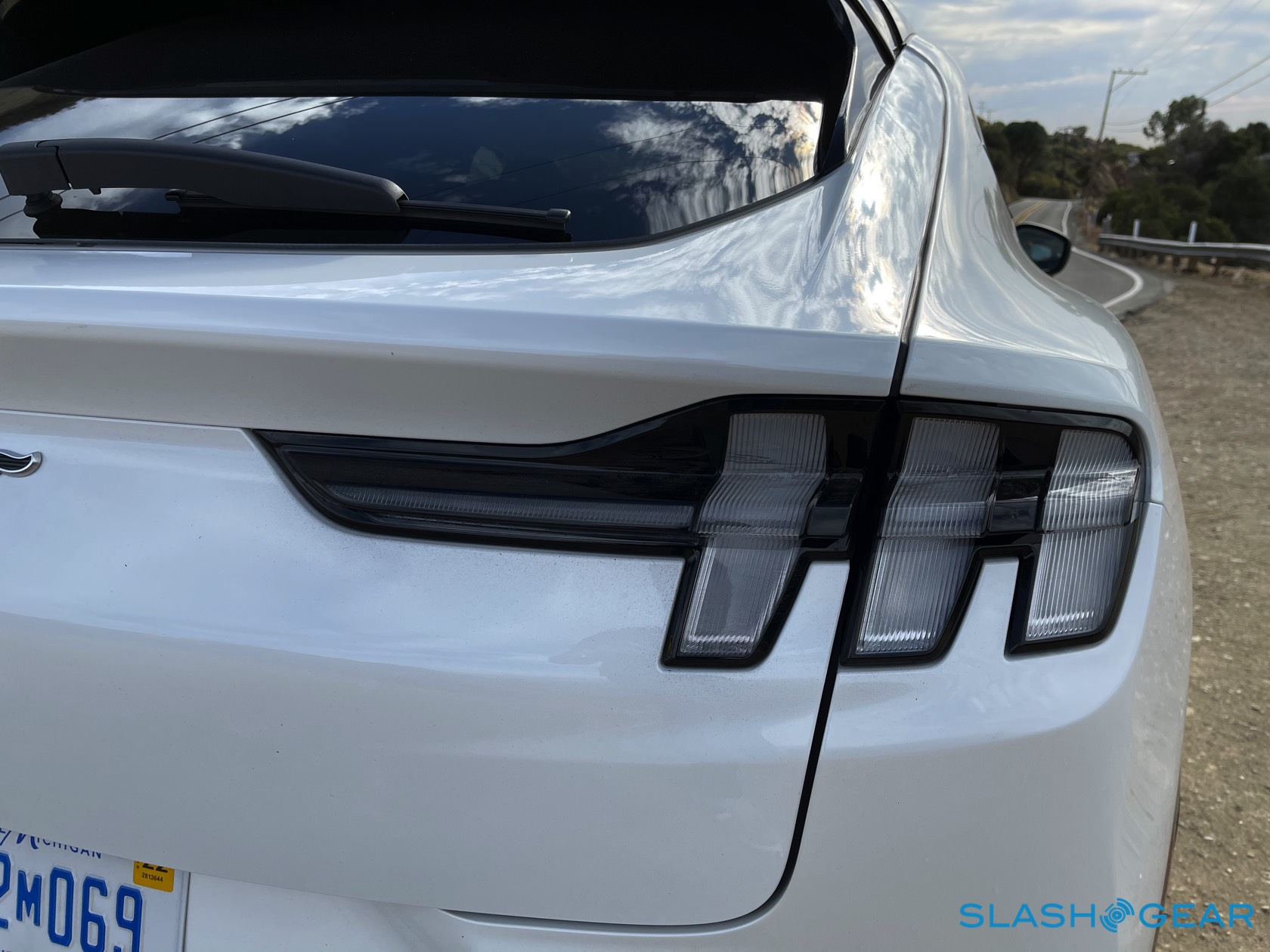 There are three different drive modes: “Engage,” “Whisper,” and “Unbridled.” I spent most of my time in Unbridled, where the electrically-controlled steering feels tighter, the suspension stiffens up, and throttle control is more immediate. Switching to the other two drive modes relaxes all the parameters but still keeps the driving performance as perky as one would expect from an EV, with its instantaneous delivery of torque. In Whisper mode, it just happens to be virtually silent.

The same can’t be said for discussion over the past twelve months about the Mustang Mach-E’s design. To my eyes, it does resemble a Mustang coupe, at least from some angles, particularly the bulbous rear haunches and distinctive front dash-to-axle ratio. What boggles the mind is the amount of space you get in such a seemingly compact package. At 186 inches long, 74 inches wide, and 63 inches tall, Ford’s crossover is as long as Audi’s e-tron and Jaguar’s I-PACE. The Audi, though, is taller than Mach-E, yet the Mustang serves up more headroom in the back, even with a tall person sitting in the front. With my 6’2 in the front passenger seat, Palmer – who stands at a whopping 6’7 – could still not only fit in the back, but have enough headroom and legroom to move around comfortably. 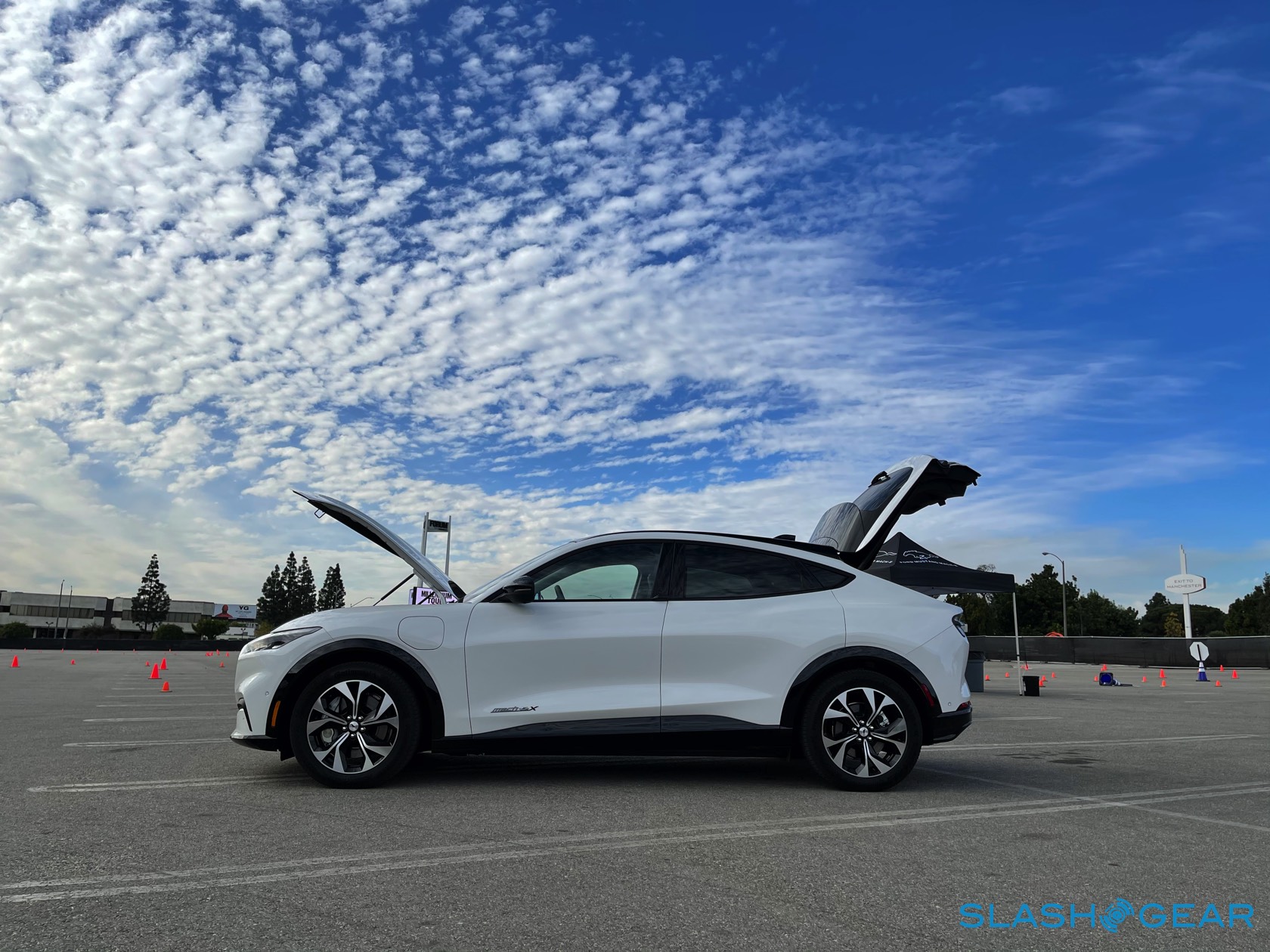 Much of that clever packaging has to do with the Mustang Mach-E’s fairly long 117 inch wheelbase – more than Audi e-tron, and almost the same as the Jaguar I-PACE – but it also benefits from Ford’s creative roof design. Like a standard Mustang coupe, the Mach-E has a sloping roof, but there’s some visual trickery involved. The window line tapers ridiculously towards the rear hatch, giving the impression of a swooping coupe but, if you look closer, the back part of the roof is actually slightly raised and extends further than the window line. You don’t see it, at least until it’s pointed out, but it means you get the distinctly un-Mustang benefit of comfortable seating for five adults. 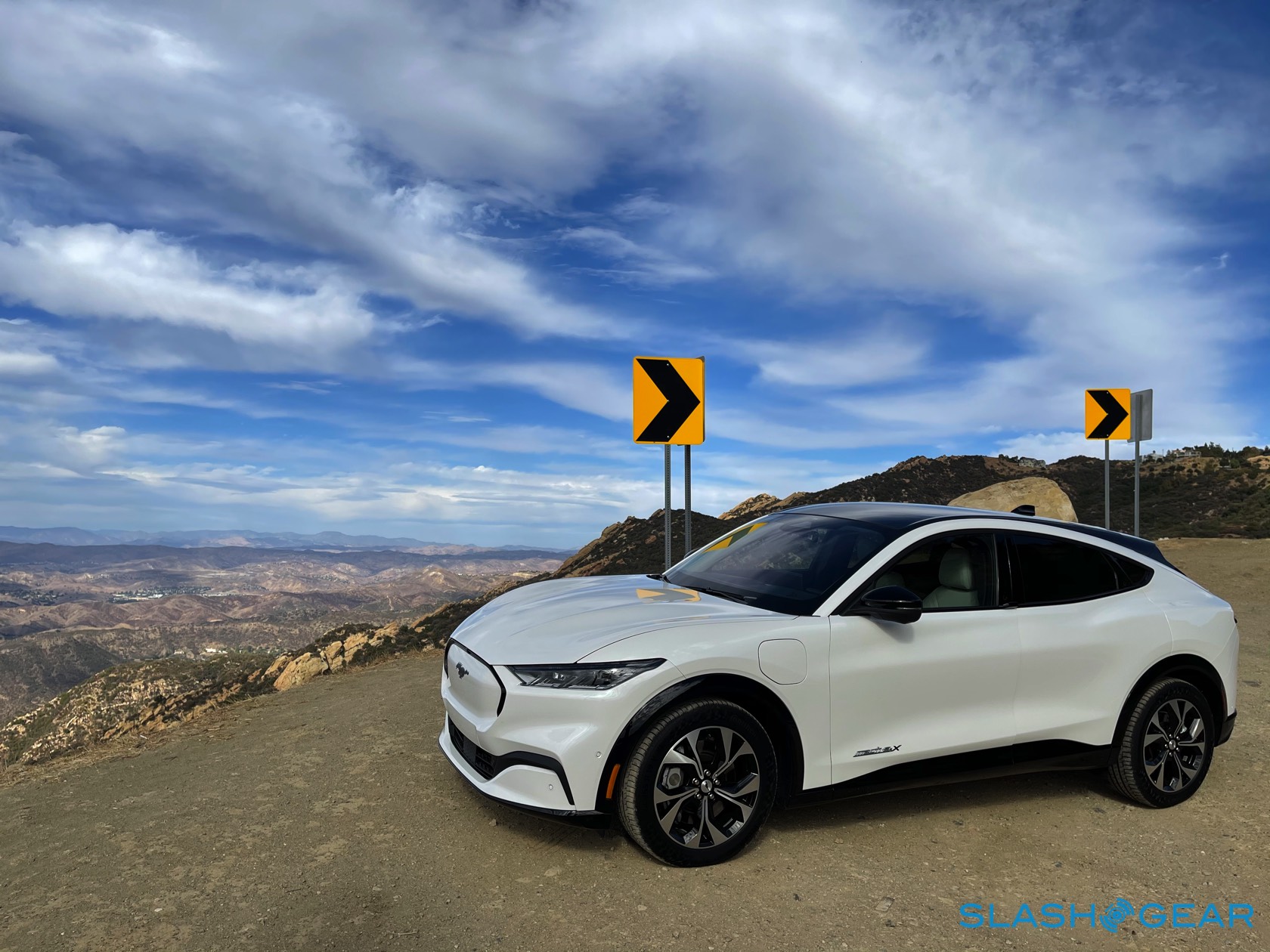 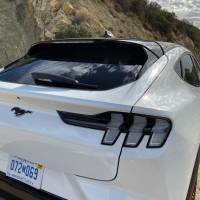 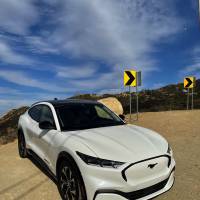 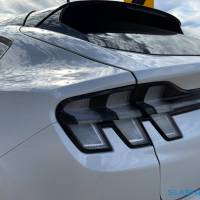 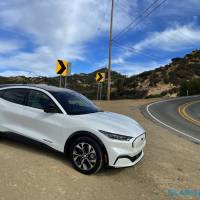 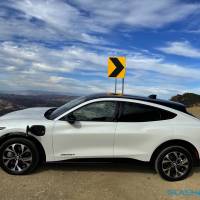 Indeed if your complaint about Ford’s icon has always been its absence of practicality, the Mach-E addresses that comprehensively. Rear seats up, it has 29 cubic feet of cargo room; fold them down, and you get 59.8 cubic feet of storage space: enough for multiple golf bags, camping gear, or even large kitchen appliances. The rear cargo floor is height adjustable to accommodate taller equipment, while the cargo cover is attached to the rear door and doesn’t get in the way when loading items in the back. It’s all very thoughtful.

With no gasoline engine under the hood, Ford gave Mustang Mach-E one of the most voluminous front trunks or ‘frunks’ in the business, serving up 4.7 cubic feet of storage space. Ford even built in a pair of molded cupholders, and made the compartment watertight with an automatic drain valve to dump liquid from inside. “You can fill the whole thing with ice and put drinks in there,” Palmer suggests, or use it for muddy, sweaty outdoor clothes without having to worry about stinking up the cabin. 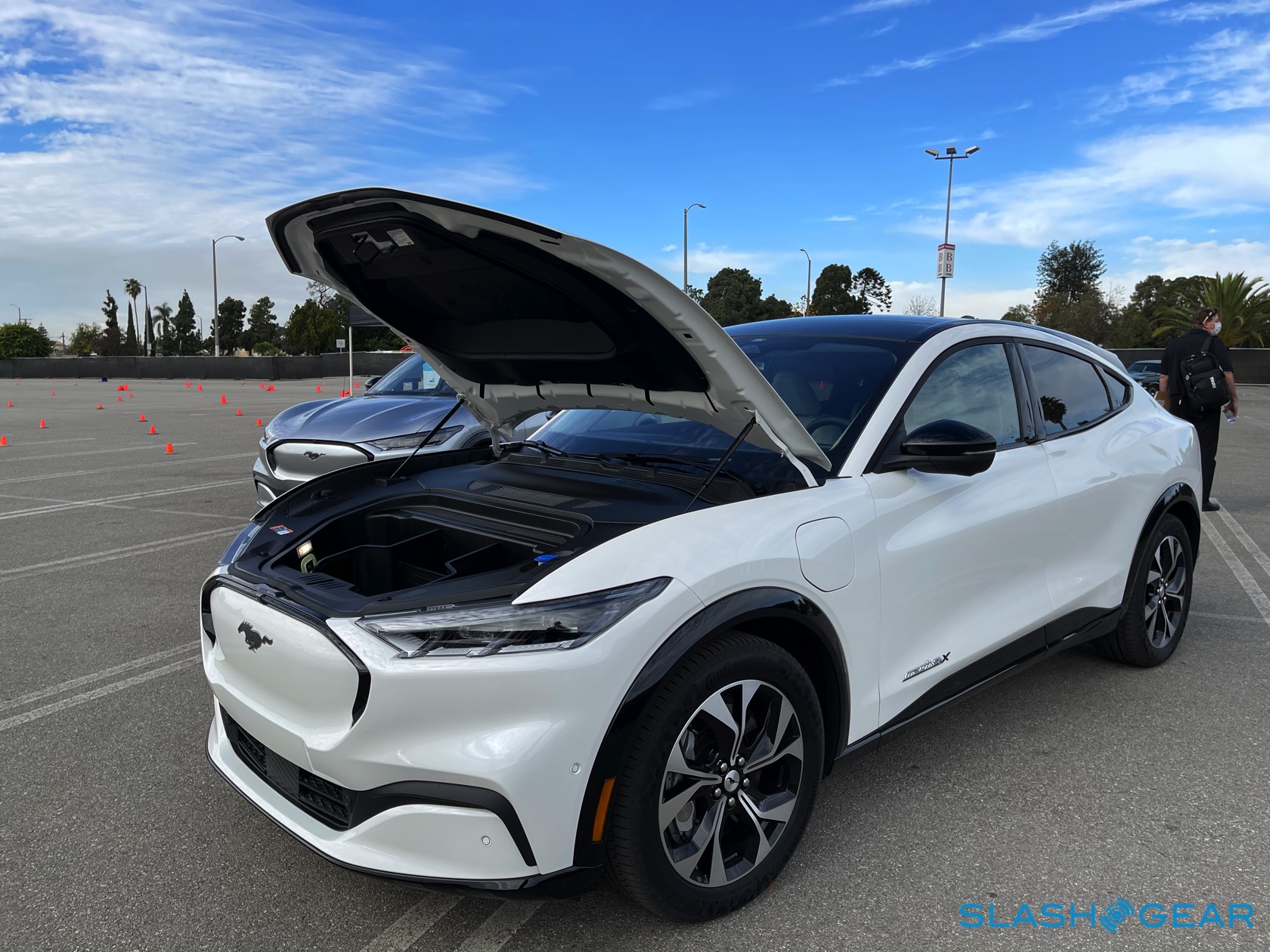 That’d be a shame, you see, because what stands out beyond the styling and the performance is Ford’s attention to detail. With those curvy doors, the Mustang Mach-E has no conventional door handles. Instead, both the front and rear doors have buttons to pop the door open slightly, a feature usually found in expensive luxury sedans. Ford’s cabins are good in general but, for the Mustang Mach-E, the automaker raised the bar further. The materials feel high-quality, and the ergonomics are excellent. Even the 15.5-inch vertically oriented touchscreen is as easy to use as a smartphone, with the new SYNC 4 supporting Apple CarPlay and Android Auto, and allowing them to coexist nicely with Ford’s own apps and services. 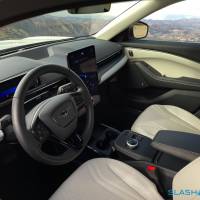 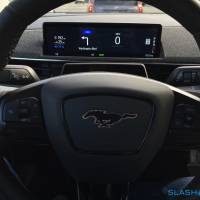 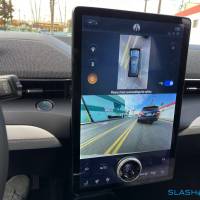 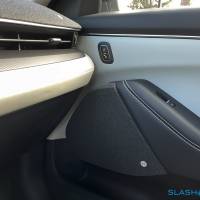 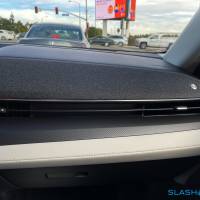 The most exciting part could be the pricing, though. Ford has multiple Mustang Mach-E trims, along with two battery pack sizes and varying power outputs. The Mach-E Premium SR (standard range) RWD has a single electric motor and a 68 kWh battery pack for 230 miles of range, while an AWD version with dual motors and the same battery pack is good for 211 miles of range. The former starts at $51,700; the latter is at $54,400. After factoring in up to $10,000 in tax credits, depending on which state you live and your financial situation, the Mach-E suddenly makes perfect sense for a zero-emissions vehicle.

It gets better if you go for the base Mach-E Select trim, available in both RWD and AWD with the standard range (68 kWh) battery. It starts at around $42,895 before applicable tax credits, putting it in the same price bracket as Ford’s Explorer and Edge SUV. A base Mach-E RWD, though, can hit 60 mph from a dead stop in 5.8-seconds. The Mach-E Premium RWD and e-AWD with the extended range battery I tested, meanwhile, had no problems rushing to 60 mph in a matter of seconds, so we’re talking about a properly quick crossover that felt so good “throttling up” through a tunnel. 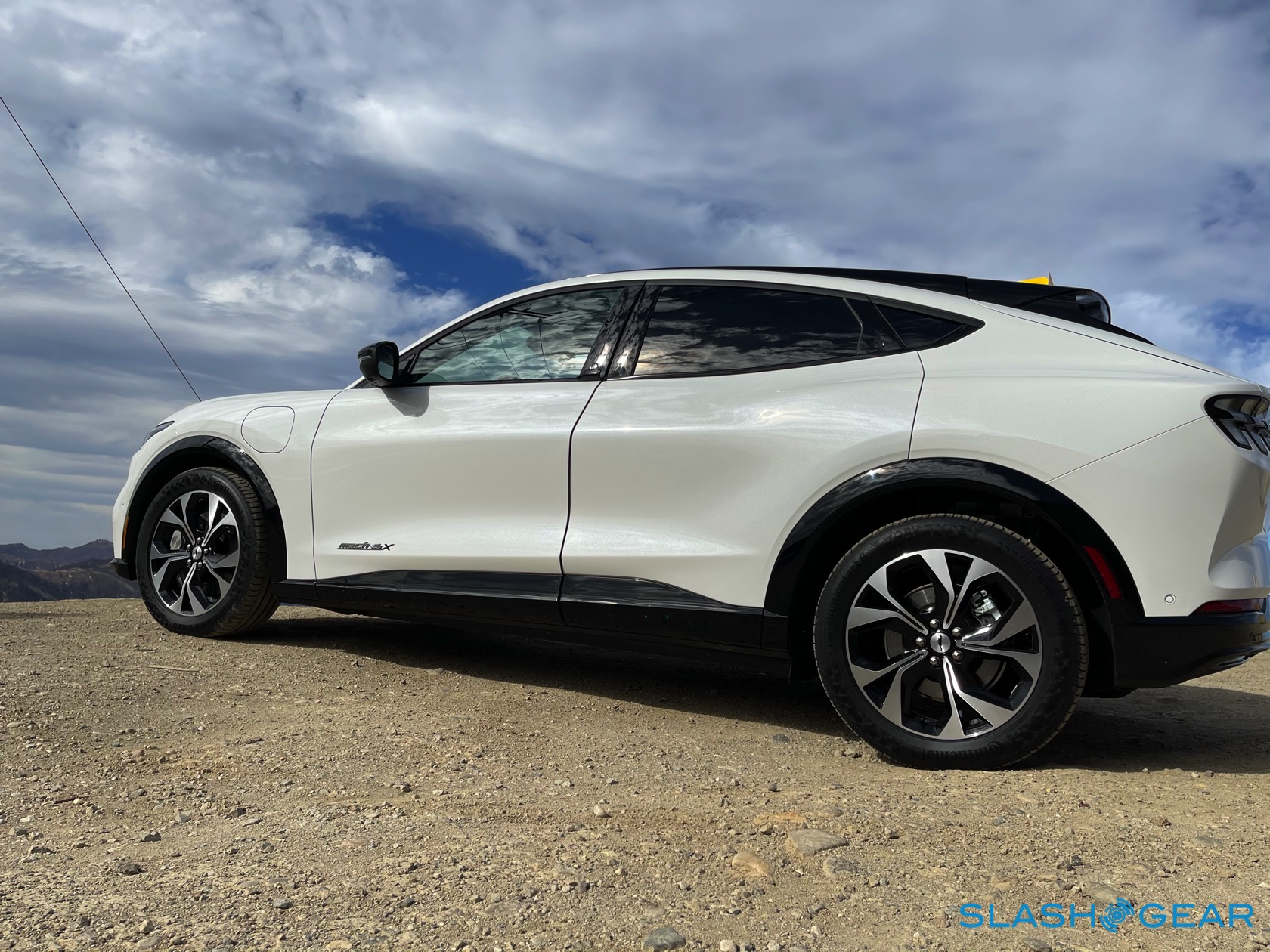 That’s not to say there aren’t kinks in the Mustang Mach-E’s armor. One-pedal driving is excellent in the city, but I found it obtrusive for highway driving. Thankfully, you can turn it off quickly with a few touches of the display screen. The Ford Active Drive Assist hands-free system hardware may be installed in most trims, but the software isn’t available to use yet, and won’t be until later in 2021. I’m also concerned about range, since the Tesla Model Y Long Range serves up to 326 miles of range. Even Tesla’s potent Performance version still clocks in at a healthy 303 miles on a charge. 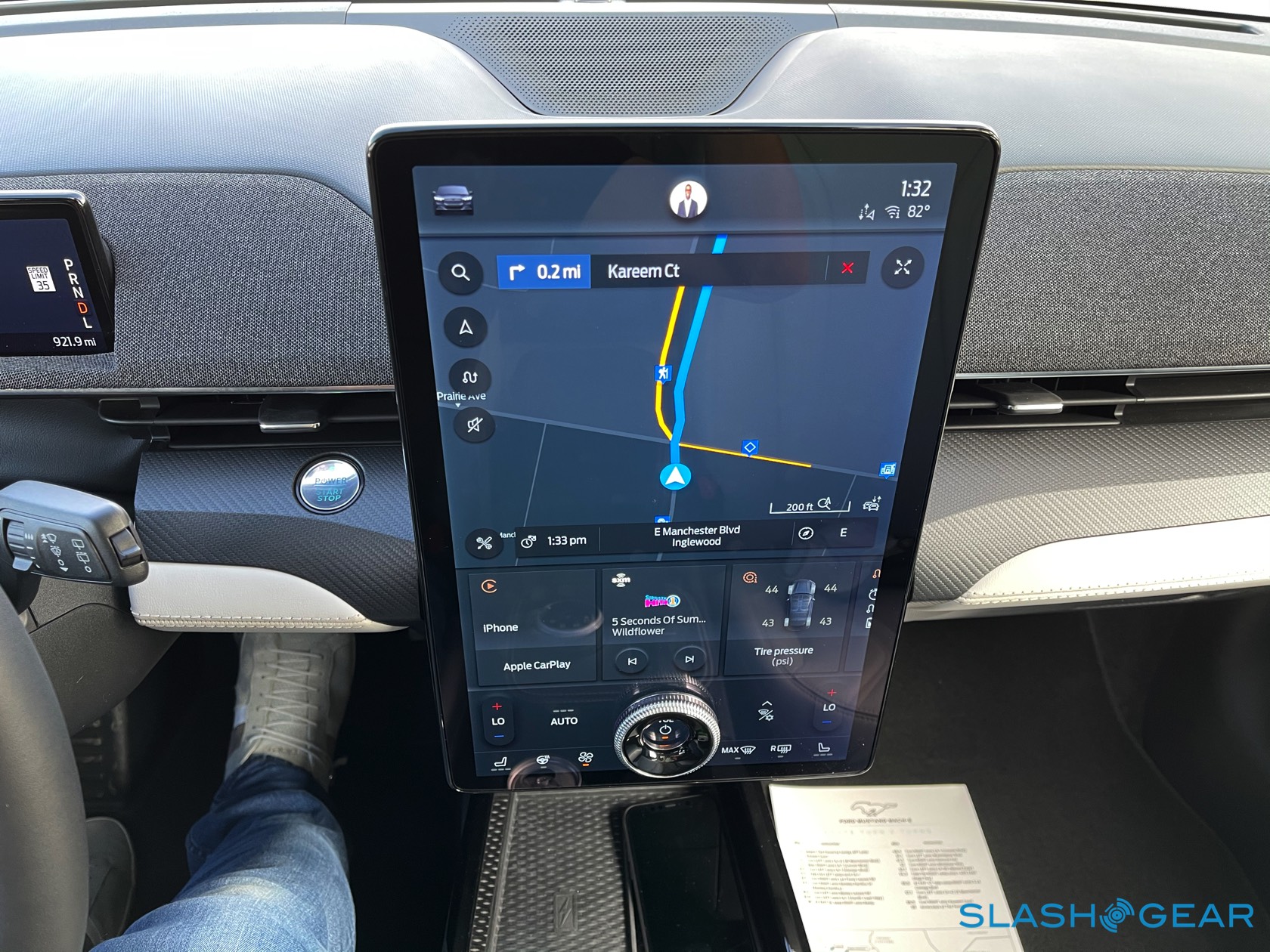 Ford’s argument is that real-world needs aren’t as demanding, and that features like more accurate range estimates along with an expansive third-party charging network will settle those concerns. I’ll need more time behind the wheel to see just how accurate the EPA numbers are when faced with everyday use, but Ford certainly isn’t the only automaker to face an uphill battle when it comes to challenging Tesla’s range.

In the end, I don’t think the new Mach-E is a Mustang. Only a proper V8 and coupe body can truly lay claim to that. However, I do believe it’s the embodiment of what a modern, emissions-free Mustang should be. Instead of resorting to gimmickry, Ford has given the Mustang Mach-E a new level of practicality and comfort, without diluting the muscle car driving experience. It drives like it looks, yes, and it bodes very well for Ford’s electric reinvention over the next few years. 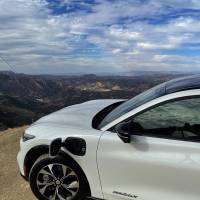 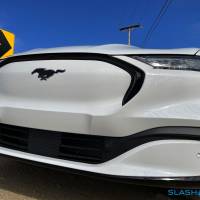 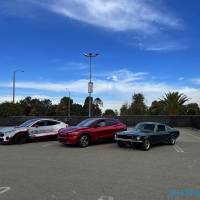 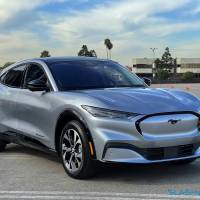 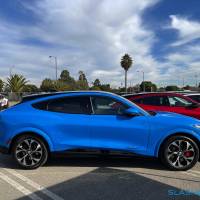