Nissan’s SUVs are going through a renaissance, and the 2022 Pathfinder is next in line to get a family-friendly upgrade. More distinctive styling, a more upscale cabin, and a welcome injection of safety features and technology help the Pathfinder rediscover its way in the competitive 3-row segment, though that’s not to say Nissan has no room for improvement. 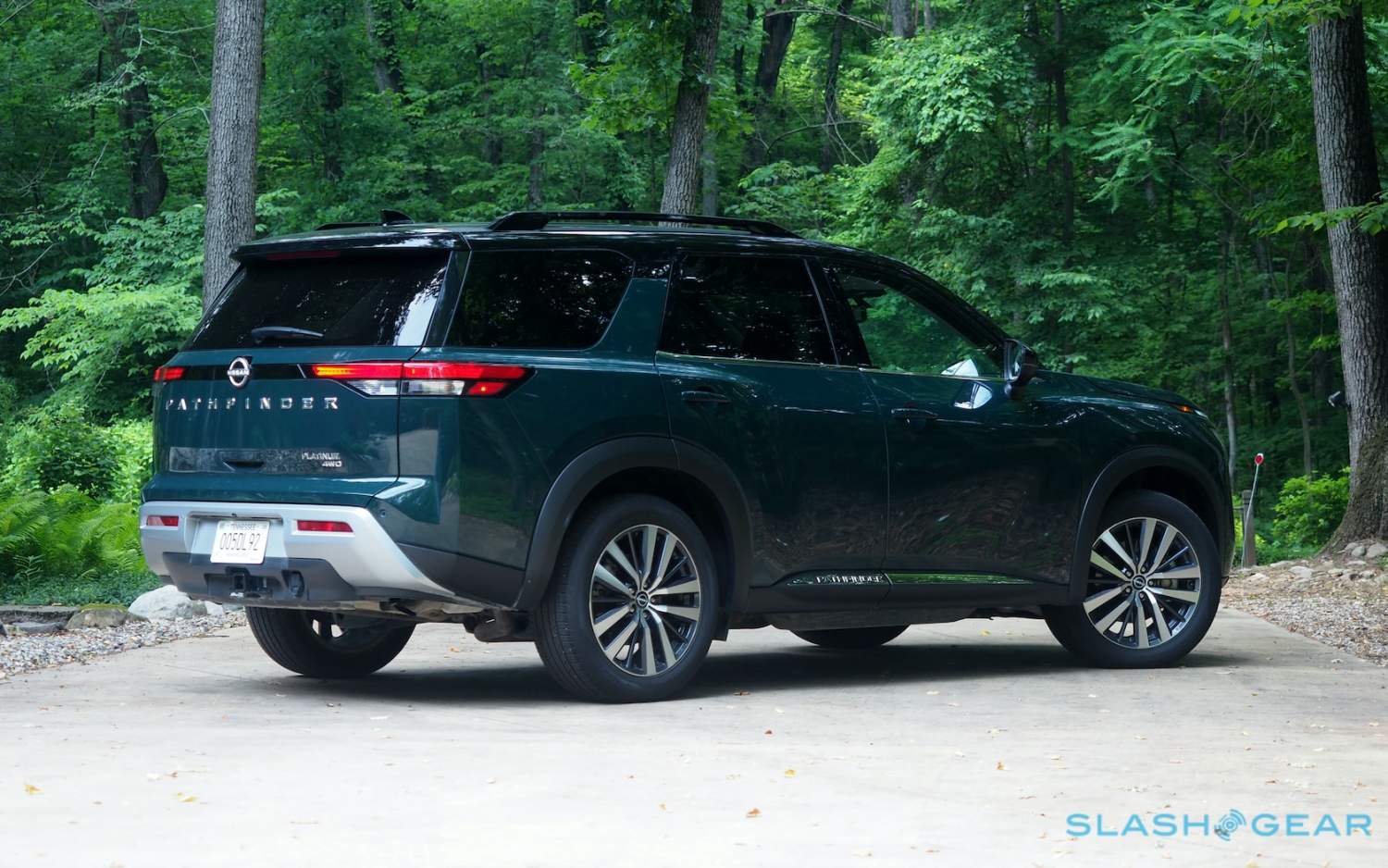 In return you get 20-inch alloy wheels, chrome side sills, and a dual panoramic roof. Nissan only has one engine for the new Pathfinder, a 3.5-liter V6 good for 284 horsepower and 259 lb-ft of torque. It’s paired with a 9-speed automatic transmission. 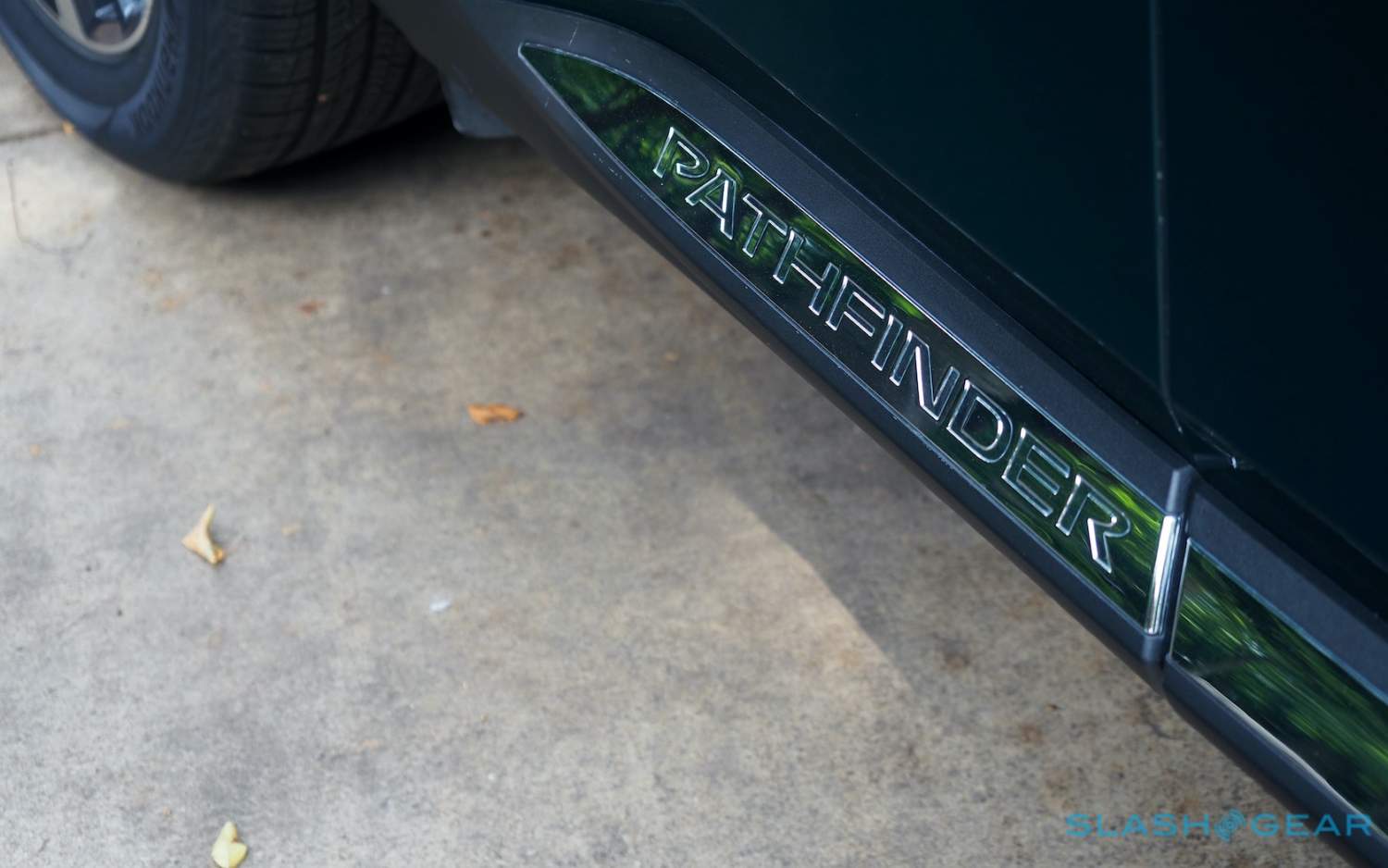 It’s a handsome SUV, with some admirably clean detailing. Maybe it’s just my eyes, but I see a little Land Rover Discovery in it, particularly in the front hood detailing around the headlamps and the rear three-quarters. That’s no bad truck to be compared to, mind. 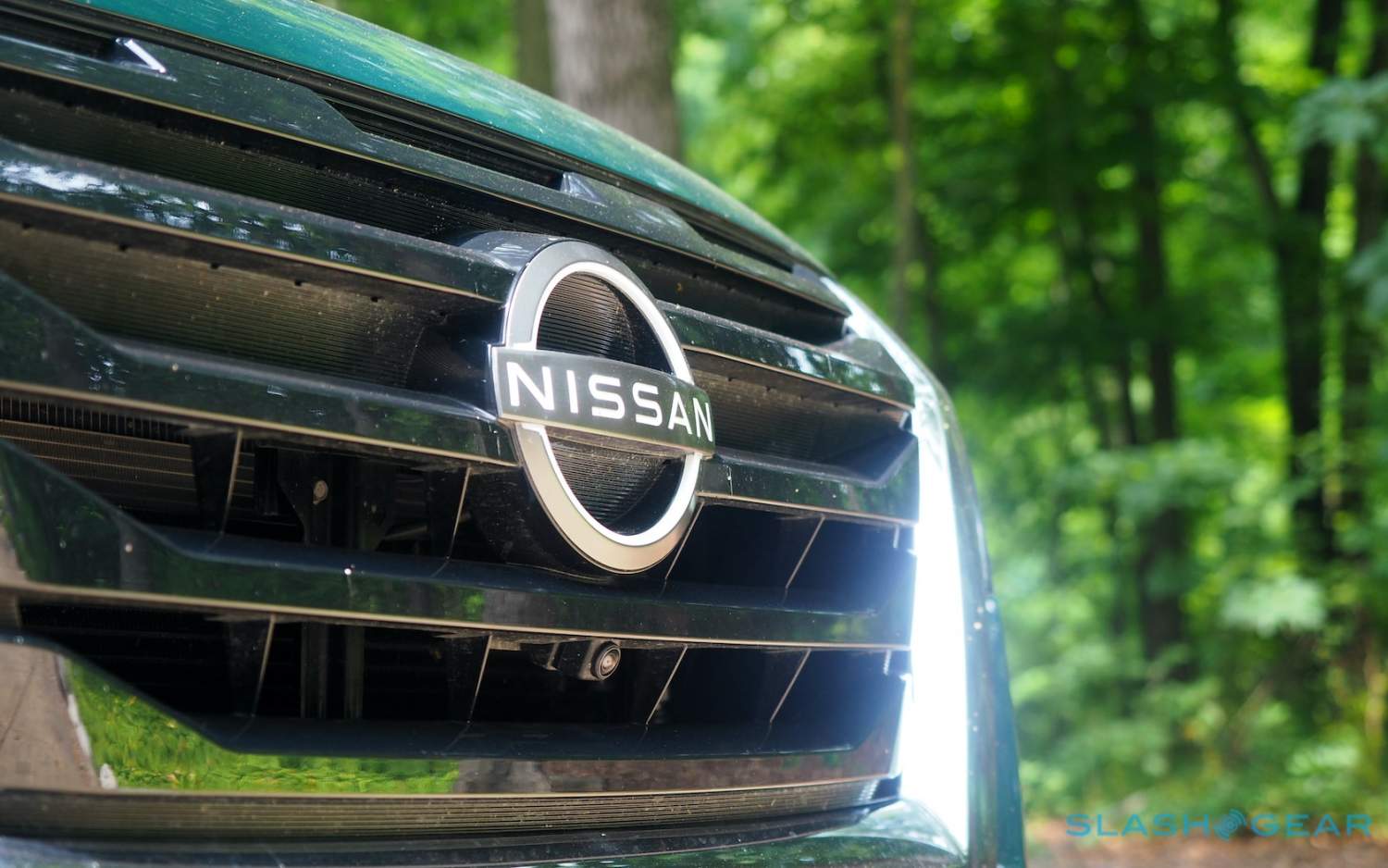 I like Nissan’s new badging, too, another subtle update but one which helps leave the Pathfinder feeling fresher and crisper. Combined with the squared-off proportions the result is an SUV that feels bigger than it is. Nissan is offering some two-tone paint finishes as well, which is a nice change.

With all-wheel drive and various off-road modes, in theory the Pathfinder is as comfortable in the mud as it is on asphalt. I suspect 99-percent of them will remain far from the wilderness, however, though features like the hill-descent assistance, up to 6,000 pounds of towing capacity, and standard trailer sway control lend usable practicality. 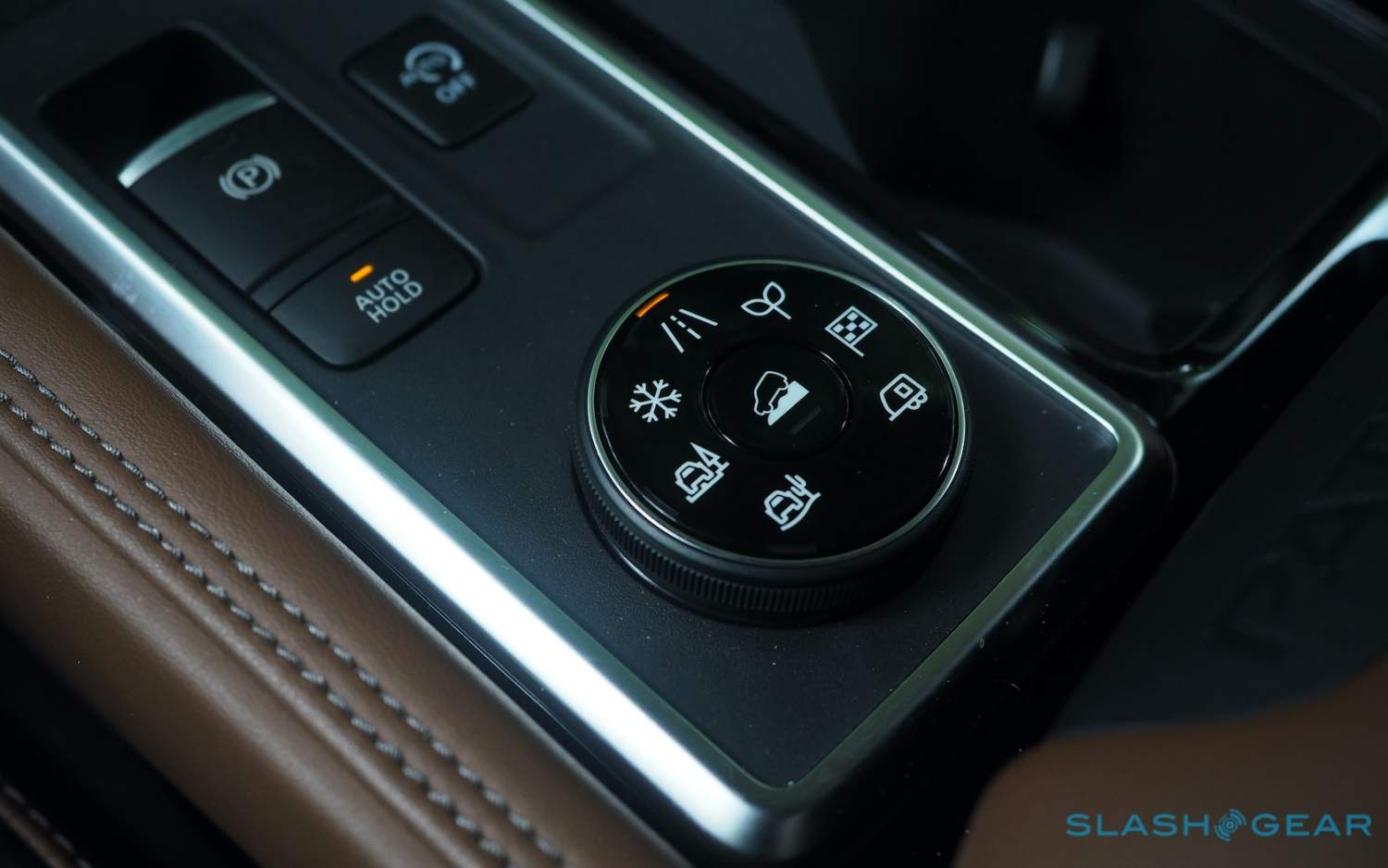 From behind the wheel it’s not slow, but then it’s not really spritely either. I’m not sad to see Nissan’s old CVT retired, though I wouldn’t argue with the 9-speed automatic getting a slightly feistier tune in the lower gears. Pick-up from a standing start feels a little leisurely, though flicking the drive mode dial to Sport does improve matters.

The flip-side is that cruising feels relaxing and sedate, even if your seven or eight seats are full of noisy family. Nissan’s steering is soft and has a little more play than I expected, emphasizing the Pathfinder’s status as a comfortable long-distance tourer. 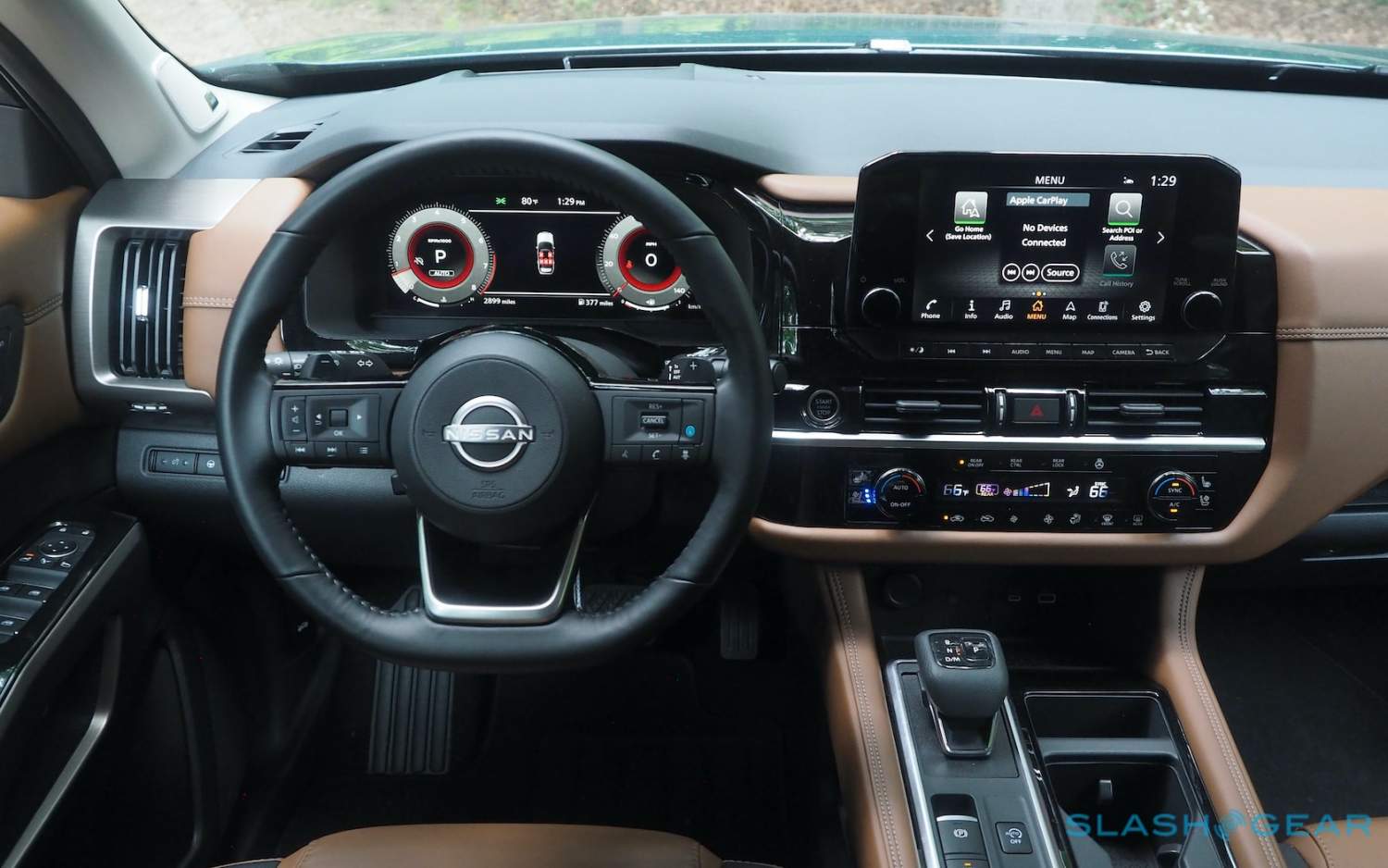 They’re not the only niceties in what is a seriously upgraded cabin – and, frankly, the best part of the new Pathfinder. The 2021 Rogue demonstrated that Nissan could do a good interior if it put its mind to it, and this larger SUV picks up on many of the details. Everything feels more solid and premium, from the soft-touch materials to the quality of the plastics. 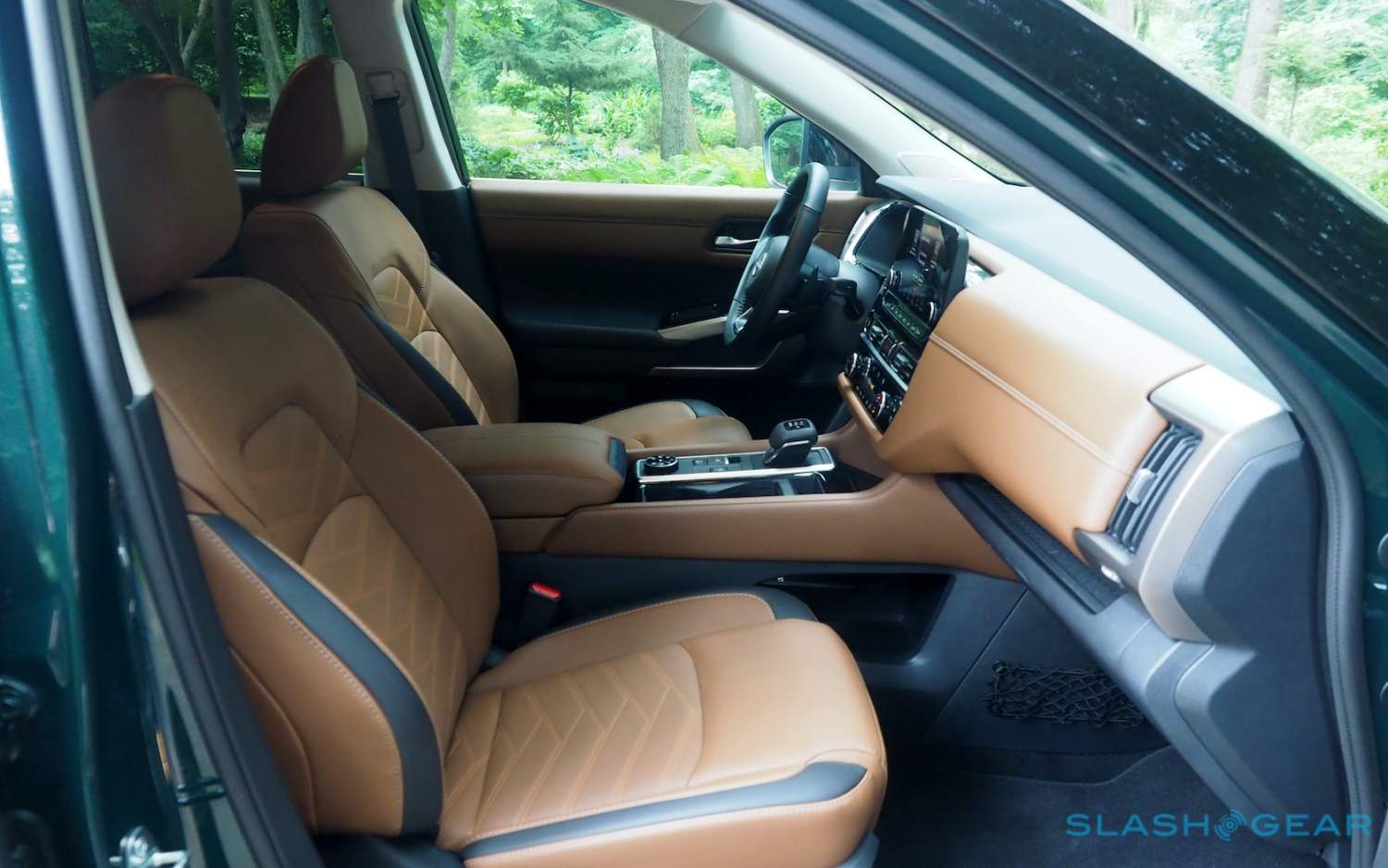 Nissan hasn’t forgotten practicality, though. The third row tumbles down easily, expanding the 16.6 cu-ft of cargo space to 47 cu-ft. That, it’s worth noting, is only a little less than 3 cu-ft under what a new Armada will hold. Drop the second-row captain’s chairs and total space grows to 78.9 cu-ft. Both the second and third rows are adult-scale – though I’d balk at putting three grown-ups in the very back – and you can even tilt the second-row seats forward without having to remove child seats first. 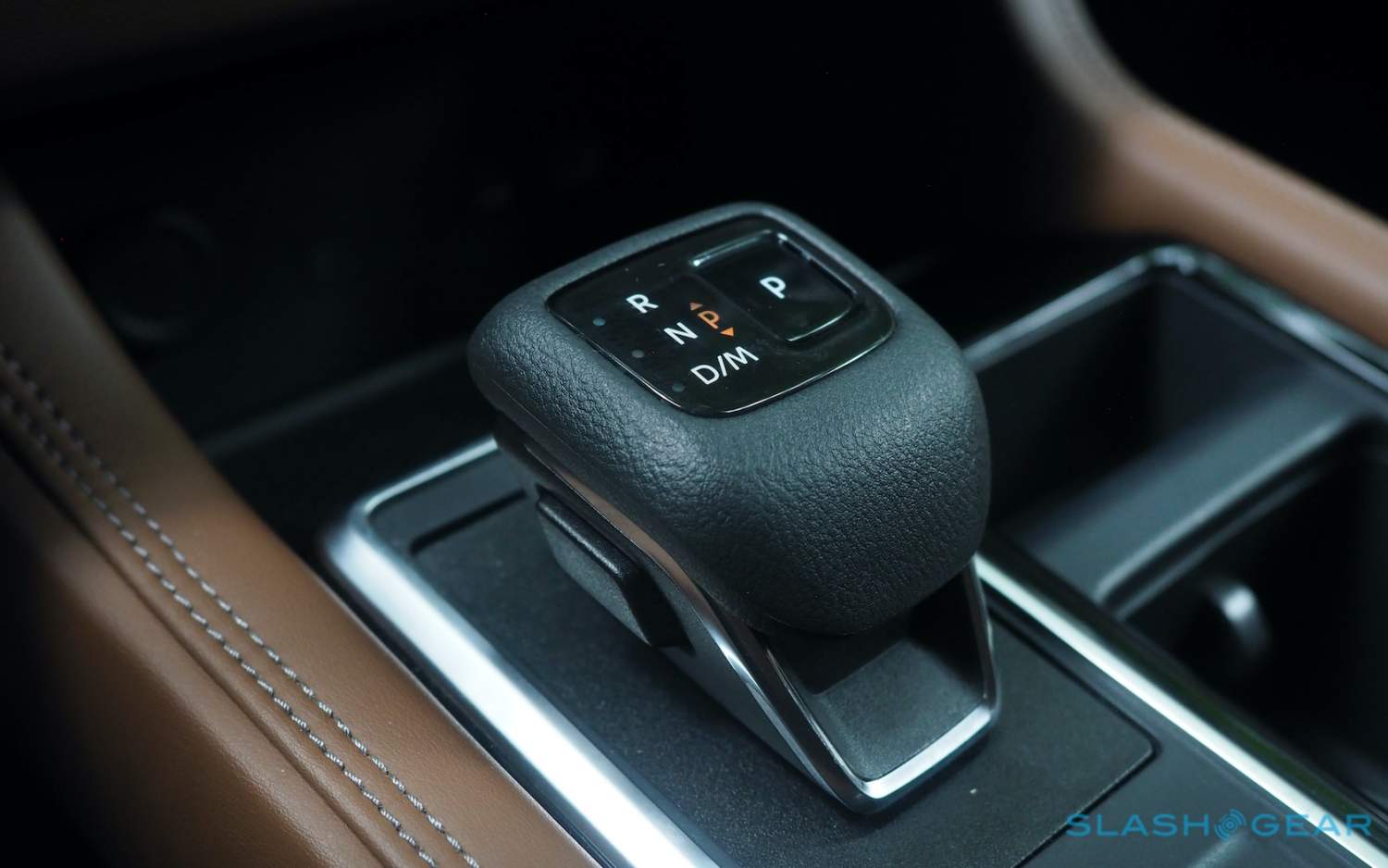 Then there are the various nooks and cubbies. A big box under the trunk floor, for example, and another sizable spot under the center console. The door pockets don’t just hold 2-liter bottles but can even squeeze in a tub of disinfectant wipes – perfect for the pandemic-precautionary – and there are plenty of other slots, bins, and cutaways to stash phones, cables, and everything else.

It’s all very thoughtful, which leaves Nissan’s stubbornness elsewhere even more frustrating. As with the new Armada and the new Rogue – both of which are very likable SUVs in their respective segments – there’s no hybrid option for the new Pathfinder. 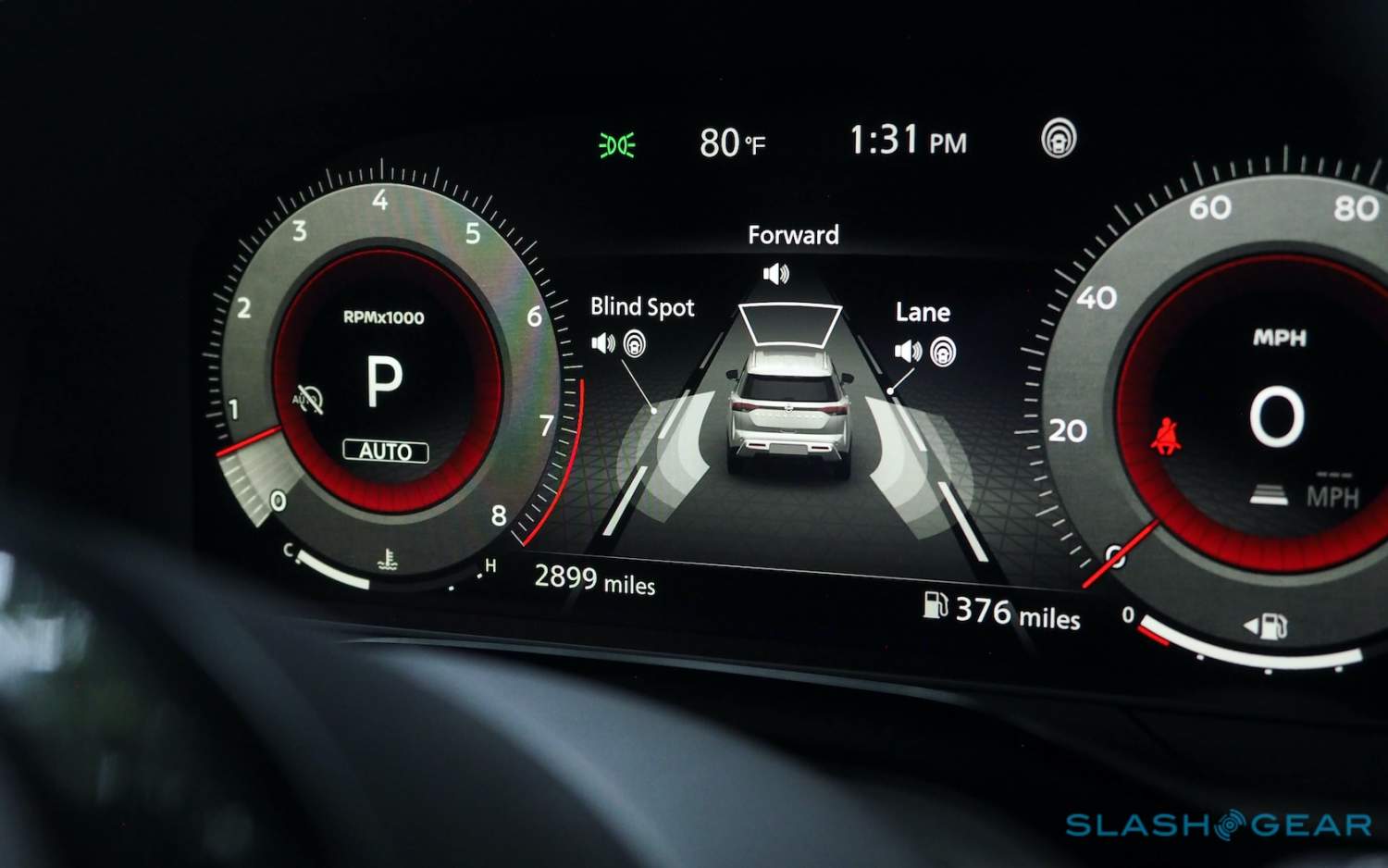 Yes, Nissan has the Ariya all-electric crossover coming next year, and a second, smaller EV in the pipeline too. Nonetheless, its unwillingness to slip even a mild-hybrid system into the bread-and-butter of its range is a stubbornness that’s getting difficult to forgive. Particularly given that the Pathfinder’s V6 is hardly all that frugal. 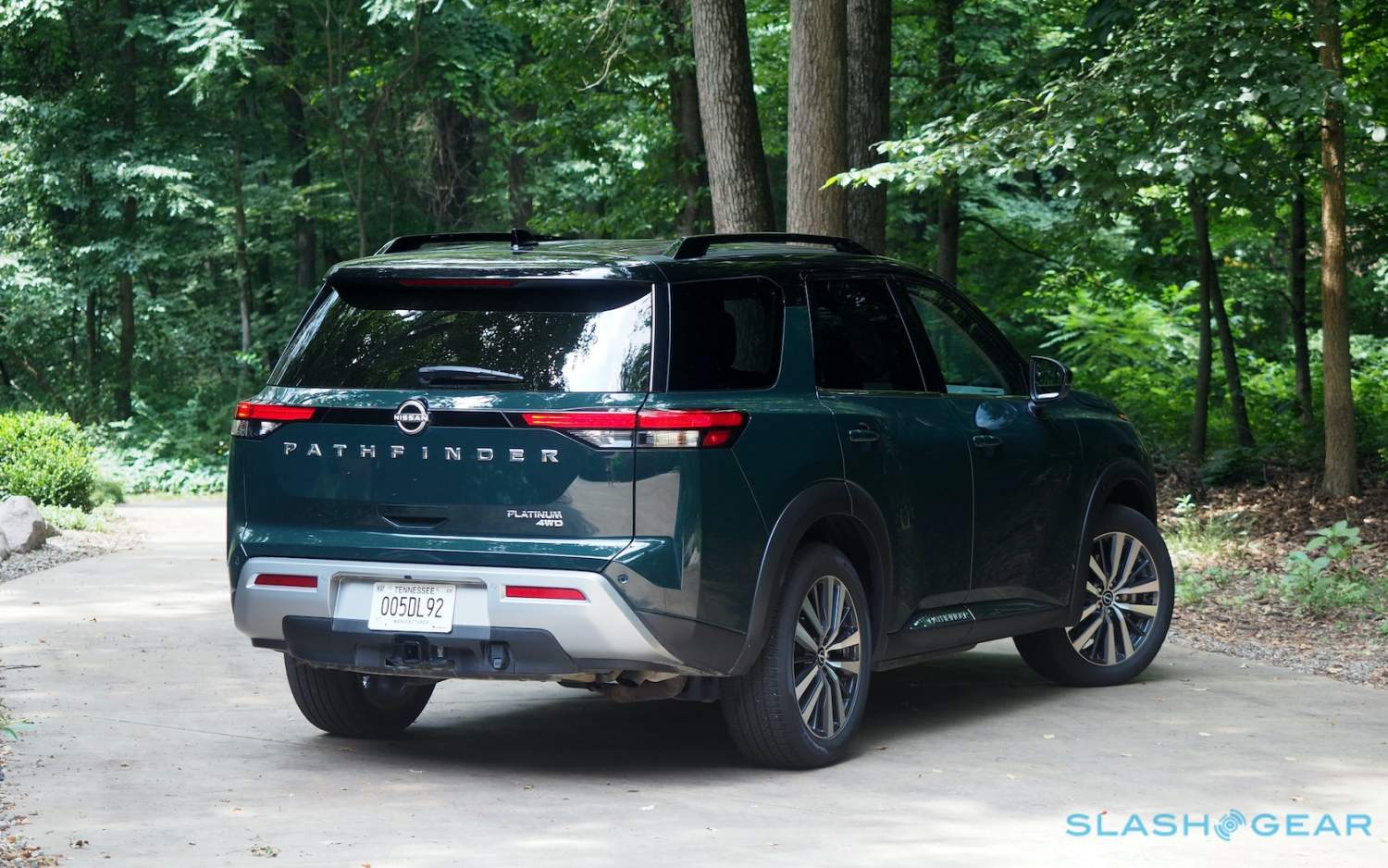 In many ways, the 2022 Pathfinder feels like a thoroughly modern SUV. It looks the part, doesn’t stint on practical features, and the cabin is a huge step up from the old model. In Platinum trim it feels borderline lavish, eons away from the plasticky Nissan fare of just a couple of years ago. 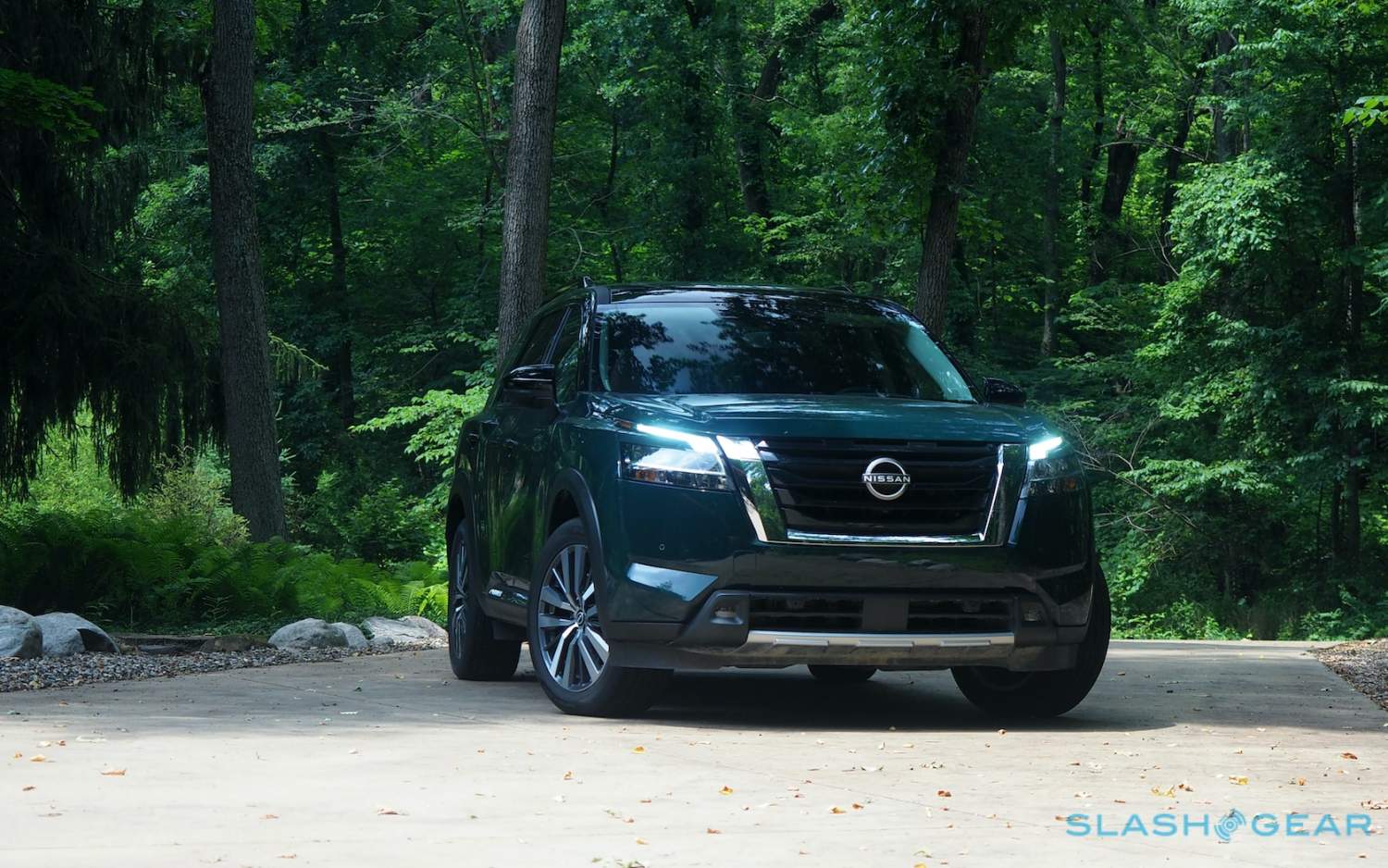 Problem is, that modern revamp hasn’t quite reached under the hood. Sure, the new automatic is a big improvement over the unlovable old CVT, but Nissan’s outright refusal to offer any sort of electrification is disappointing.

I’m not going to say that you should let that stop you from buying a 2022 Pathfinder, but I do think the window in which automakers can get away with ignoring hybrids’ potential in SUVs like this is closing fast. In so many ways, the new Pathfinder feels like the memorable, usable family vehicle we’ve long looked to Nissan for. All that’s missing is a convincing commitment to going green, too.