You could make a solid argument that the 2021 Nissan Armada is the poster-child for successful mid-cycle refreshes. The three-row SUV has a reputation for setting aside anything remotely sporting in favor of snooze-inducing comfort – in the best possible way – but blobby styling and a dated cabin were clear giveaways of its age.

Nissan clearly knew as well as the rest of us where the Armada was feeling tired, and the 2021 model year is a targeted checklist of focused improvements that only really reinvents what needed that. The exterior gets a new, more truck-like fascia, with a bolder grille that retires the fussy mesh of its predecessor. 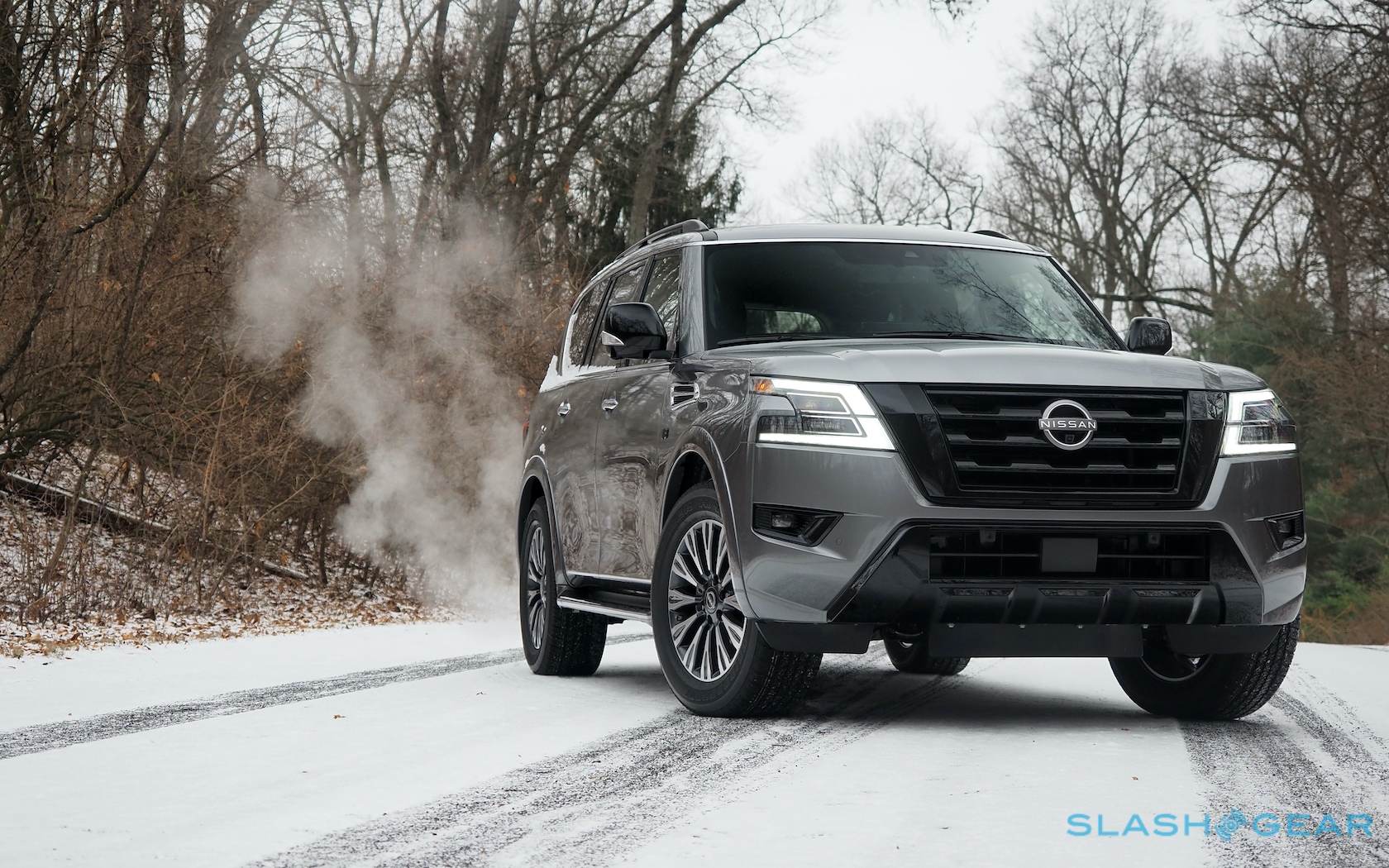 Either side are more focused LED headlights, with a crisper signature shape. A revised lower fascia helps offset the upper section better, too. At the rear, the trunk-spanning bar linking the new LED lamp clusters and the sharper creases to the lower bumper help tighten up the 2021 Armada’s proportions. The old car always looked a little like Pharrell’s oversized Grammy’s hat to my eyes; this new one is tauter and more controlled. 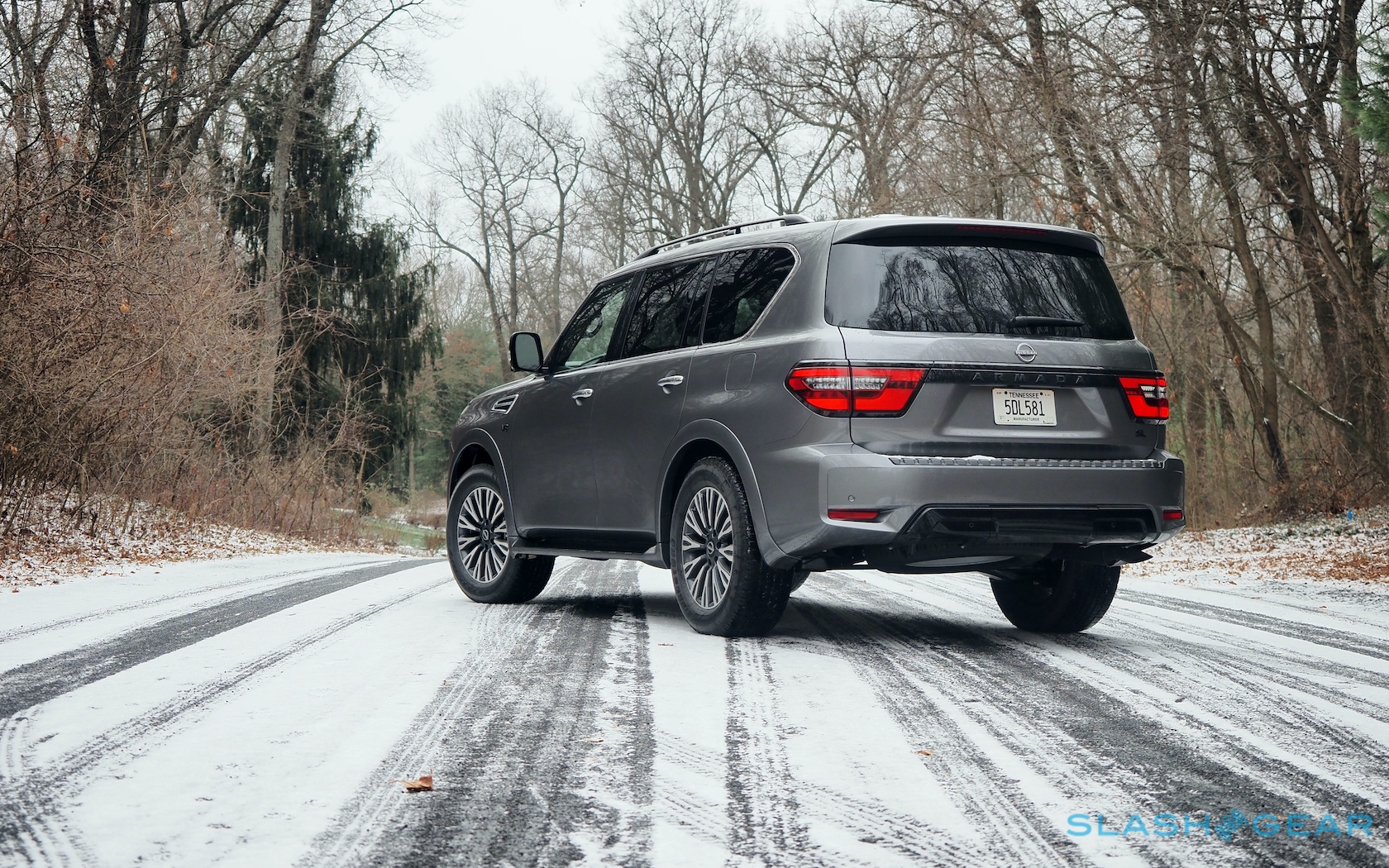 Some of the fussier detailing remains. The side vents on the front fenders feel dated, though I can understand Nissan wanting to fill some of what’s otherwise a large expanse of sheet metal thanks to the Armada’s high beltline. Generally, though, I’m a fan of how much more rugged and intentional the SUV looks.

The biggest changes are saved for inside, though, which is just where they were needed. The old Armada’s dashboard looked tired and needlessly over-complicated, particularly its dual-display infotainment system. It’s been ditched completely, with a brand new center stack topped with a 12.3-inch touchscreen. 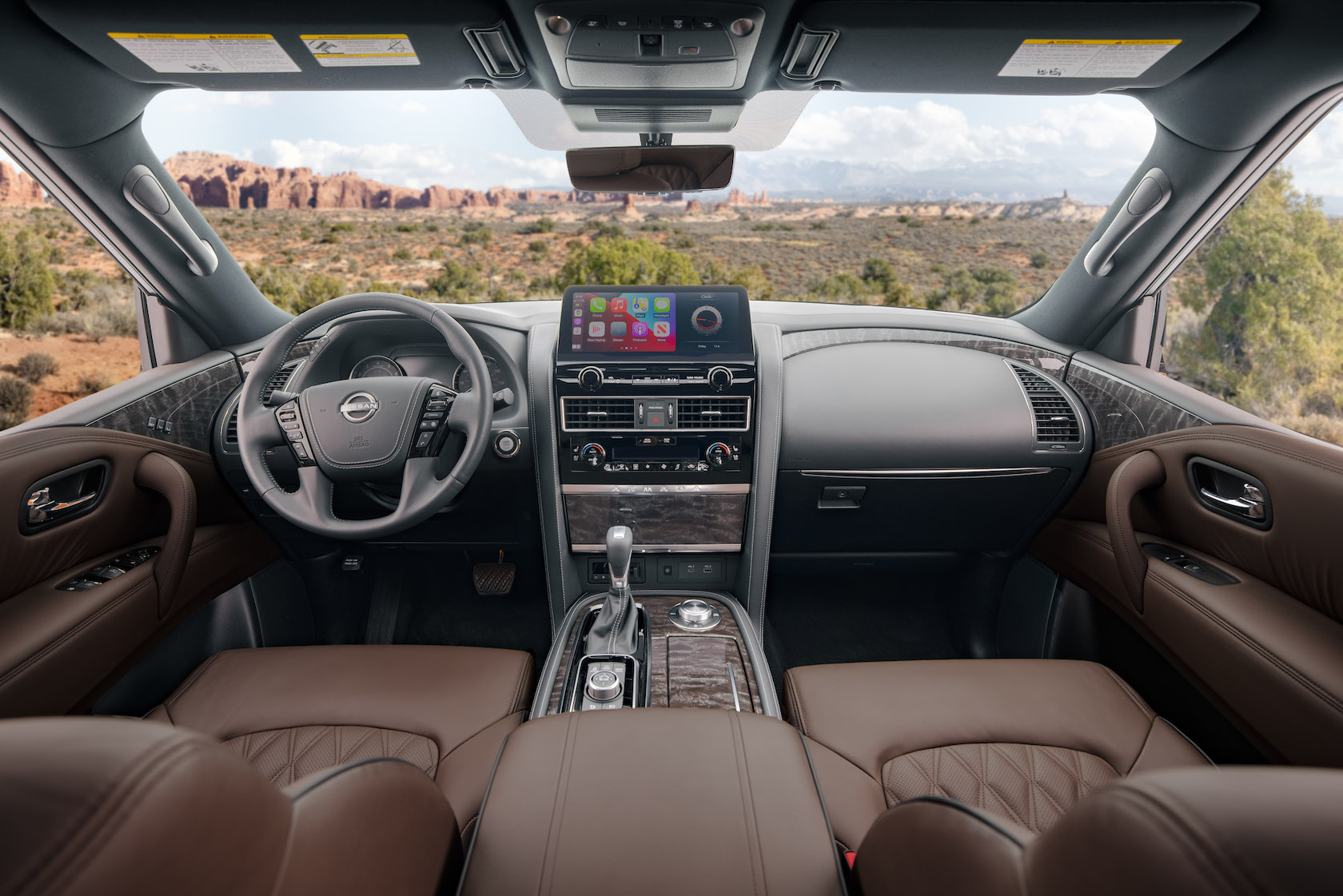 While the graphics still aren’t my favorite, it makes a huge difference to just how usable the Armada is on the road. Festooned with buttons and dials, and with two screens to ponder over, trying to quickly adjust HVAC, navigation, or multimedia settings while driving could be a headache in the old SUV. This new iteration is far easier to interact with. 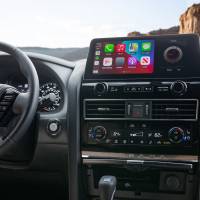 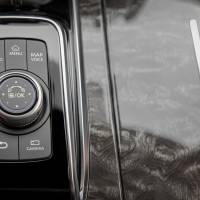 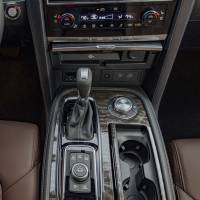 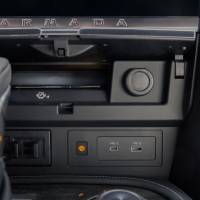 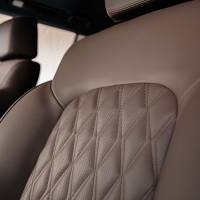 Control placement has been given some more serious consideration. Though the transmission shifter remains, the infotainment controls fall to hand more readily. I’m a fan of Nissan’s dedicated button to call up the exterior camera views, too: the 2021 Armada is no smaller than before, and that can make tighter maneuvers a little stressful. There’s now a wireless charging cubby available, though since only Apple CarPlay is wireless here, not Android Auto, you’ll still need to snake a cable to your Google phone. 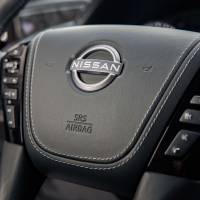 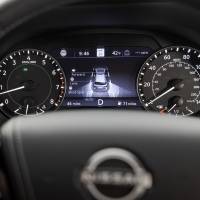 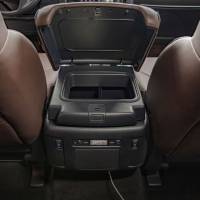 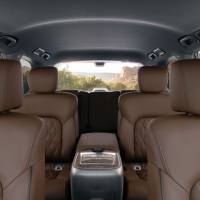 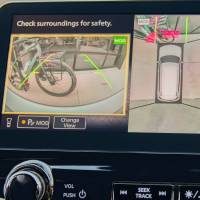 As with the exterior, not all of my cabin complaints have been fixed. The steering wheel still has a lot of controls – including buttons for the standard adaptive cruise control, lane-departure warnings, and other safety tech – and figuring out which does what can be a chore. The 7-inch driver display flanked by analog gauges feels a little old-school compared to other high-end SUVs.

On the road, Nissan’s 5.6-liter V8 is your only engine choice, with a slight increase to 400 horsepower and 413 lb-ft of torque. Rear-wheel drive is standard and all-wheel drive an option; both get a seven-speed automatic transmission. Whichever drivetrain you go for, towing capacity is up to 8,500 pounds, and you can optionally add a Trailer Brake Controller and Trailer Sway Control. 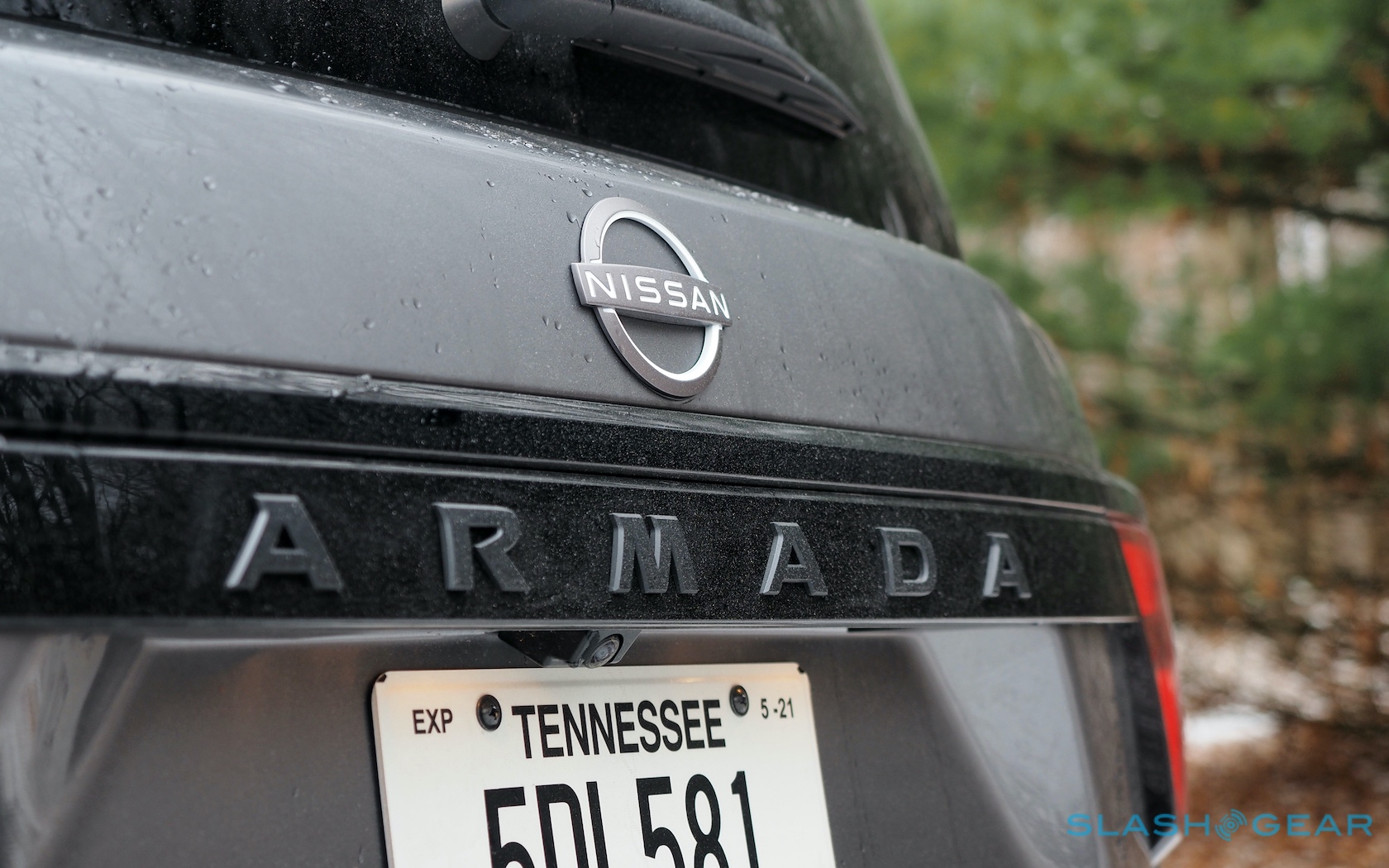 With a big engine under the hood, it’s no surprise that the Armada has some decent pick-up. It sounds the part, too, though I’d not argue with an eighth gear ratio for highway cruising. Come the corners, the reminder that you’re in something that weighs around 6,000 pounds is worth heeding. Happily Nissan’s brakes are both effective and easy to modulate, since body roll comes as standard with the Armada’s squishy, bump-absorbing suspension. 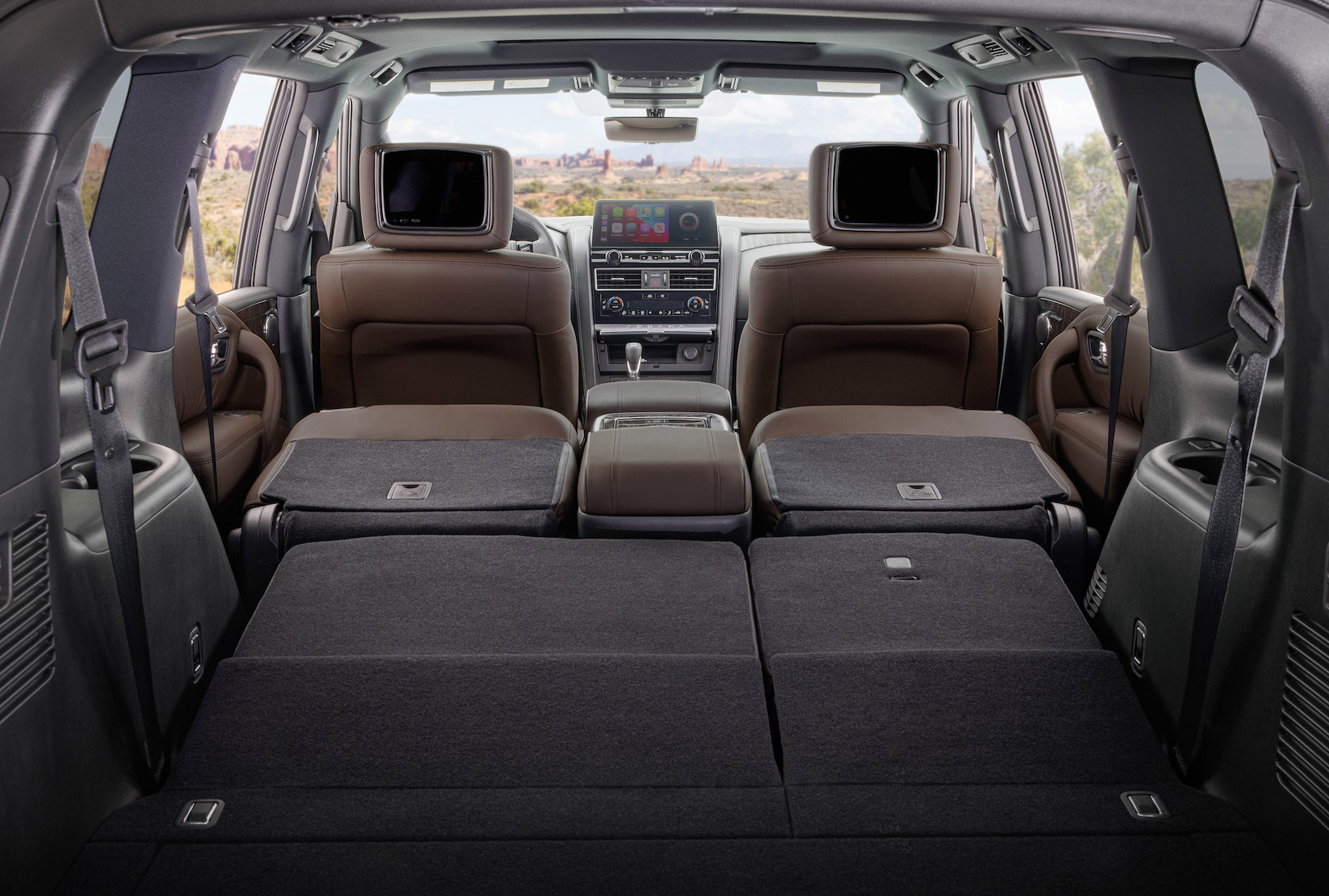 Those spread across the three rows would probably prefer a more sedate ride, anyway. Space there isn’t as voluminous as in rival SUVs, particularly noticeable in the third row, though I can’t argue with Nissan’s finish. Plush leather and optional second row captain’s chairs make for an interior you could confuse for an Infiniti. 16.5 cu-ft of trunk space with the third row up expands to 49.9 cu-ft if you drop those seats down – tug a cord and they tumble flat – and up to 95.4 cu-ft with everything but the first row collapsed.

As for economy, official EPA numbers aren’t out yet. The MY20 Armada – with the same engine, tuned for a little less power – came in at 16 mpg combined for the 2WD and 15 mpg for the 4WD, and it’s hard to imagine this 2021 version straying too far from that. Frugality has never been high on the Armada’s list of priorities. 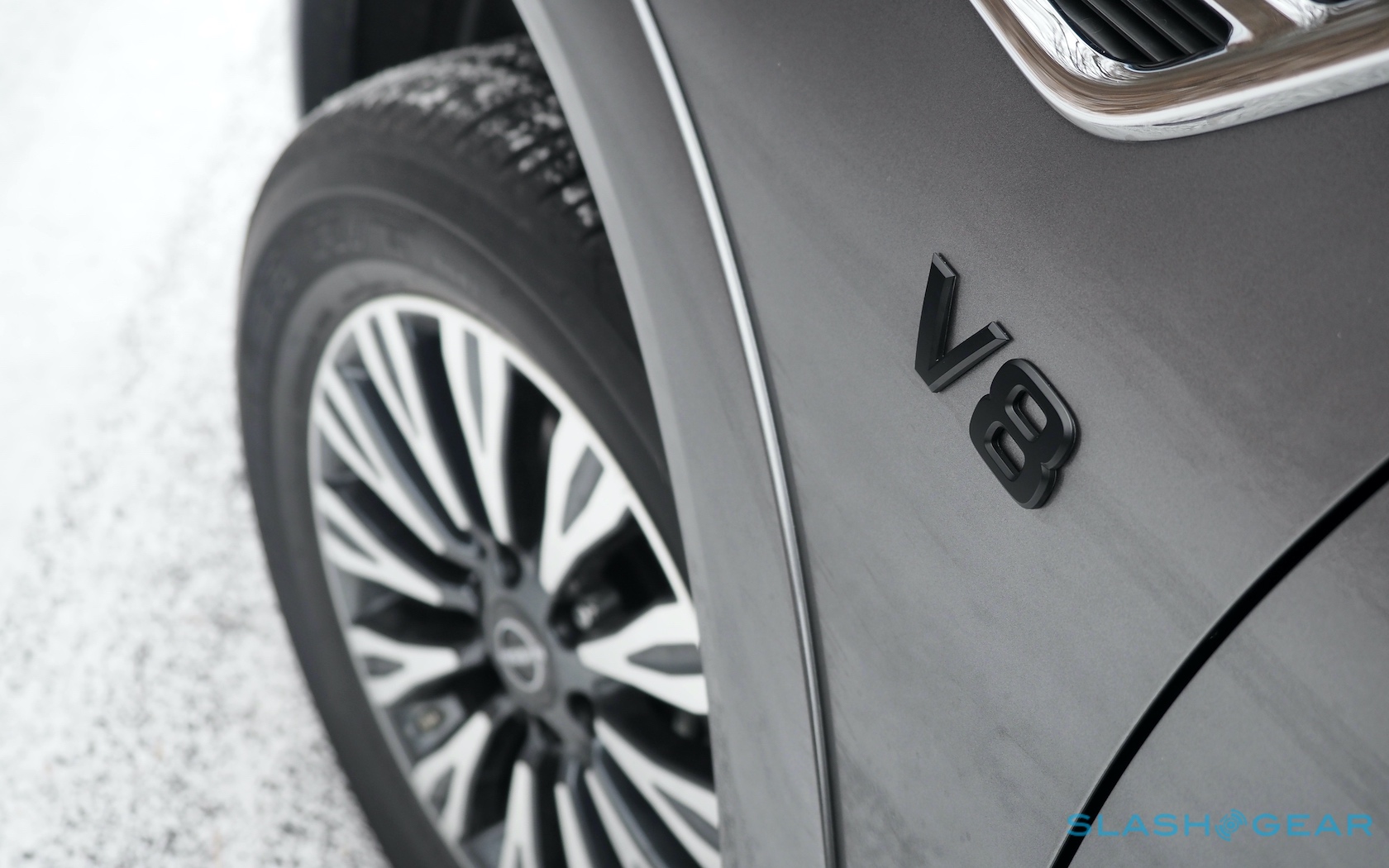 In a time when even big SUVs are pretending to be sports cars, with dynamic drive modes and fancy adaptive suspension, you could either view the Armada’s dedication on cosseted cruising as a throwback or as admirable focus. The reality is that there’s only so much Nissan can do with a body-on-frame platform that’s not exactly a spring chicken, and so the fact that it has coaxed so much personality from it is actually pretty impressive. Genuine off-road ability isn’t too much to ask for, either, with low-range gearing on the 4WD Armada. 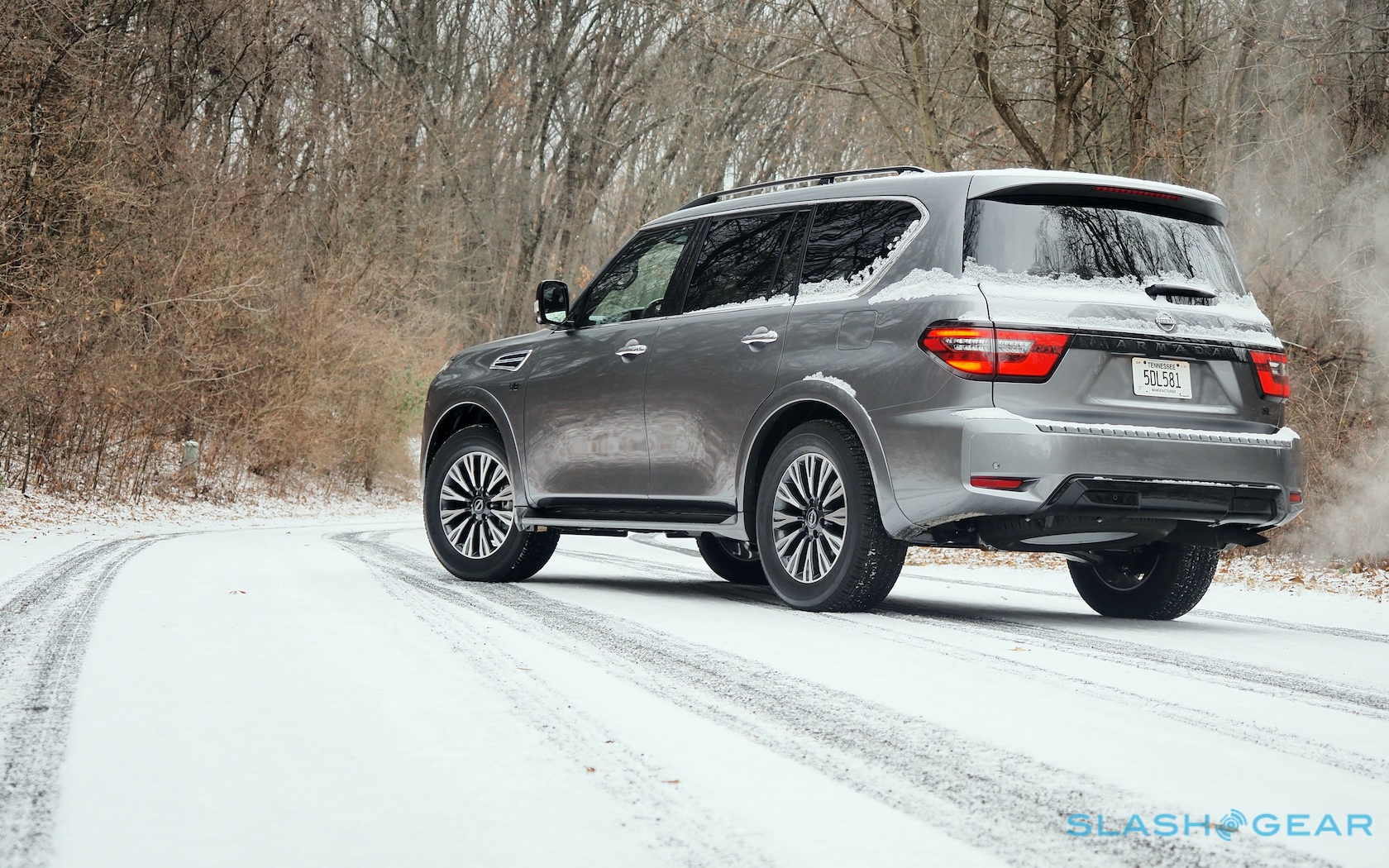 I’m expecting the same sort of pleasant surprise for pricing. Nissan won’t confirm that until early in the new year when the 2021 Armada goes on sale, but I wouldn’t expect too much difference from this year’s model which kicks off at $47,500 plus destination. Yes, the fancier interiors and extras of the upper-tier SL and Platinum trims will send that number northwards, but even then it’ll likely be competitive with a Tahoe or Expedition. 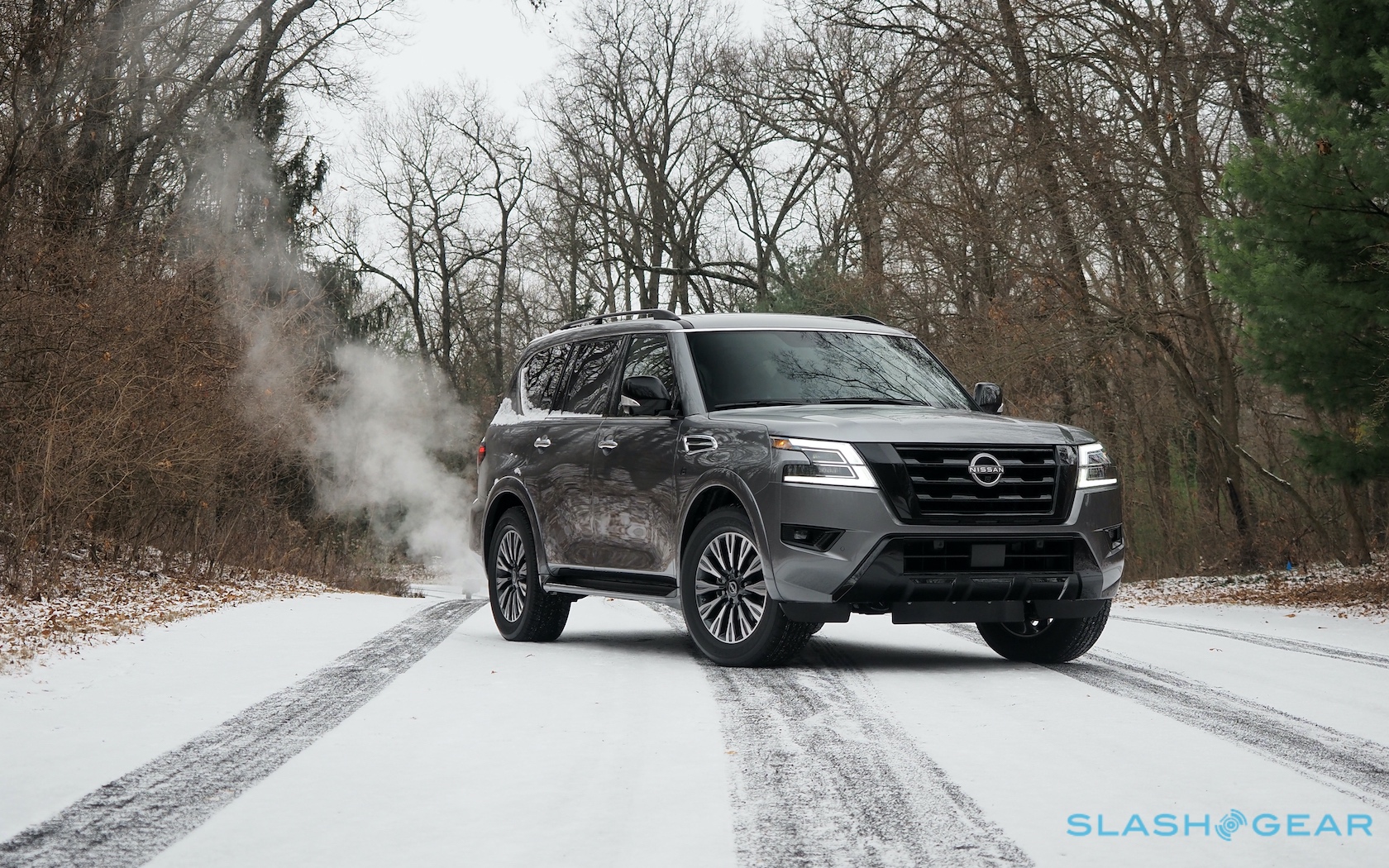 Not the SUV for those looking for some back road fun when the kids are dropped off, then, but the 2021 Armada takes the attainable luxe promise of the old SUV and polishes where things were looking tired. If that’s your focus too, Nissan’s refusal to compromise on quiet comfort has plenty of charm.