Nissan is balanced on a knife-edge, and the new 2021 Rogue may be the crossover SUV that tips it one way or the other. Sales highlight in the automaker’s range, and looking all the more important as Nissan promises a revamped, revitalized, and model-reduced future, the stakes are clearly high.

The new design borrows heavily from the 2018 X-Motion concept, and is all the better for it. From the front, the bolder V-motion grille and squared-off hood and LED lights leave the new Rogue looking more rugged and purposeful; at the rear, the “floating” roof may hardly be new in automotive styling circles but Nissan still pulls it off. With 17-inch alloy wheels as standard under beefier arches, the 2021 Rogue loses its predecessor’s unmemorable softness.

At launch there’ll be a single engine option, regardless of trim. The 2.5-liter naturally-aspirated four-cylinder borrowed from the Altima, here it delivers 181 horsepower and 181 lb-ft of torque, and is paired with a CVT that has new step tuning. Power is up 10-percent over the old Rogue’s engine, torque up 3-percent, and there’s a 1-2 mpg economy improvement too: a FWD Rogue SV is rated for 26 mpg city, 34 mpg highway, and 29 mpg combined, while its AWD counterpart should get 25, 32, and 28 mpg respectively.

If you were hoping for a hybrid, though, you’re out of luck. Nissan says that’s because the segment as a whole is still well over 90-percent internal-combustion, and the old Rogue hybrid made up less than 10-percent of the SUV’s sales before it was quietly put out to pasture. Beyond the 2021 model year, of course, nobody is saying anything concrete, and the official line is that the automaker is “always looking at alternative powertrains.” For the moment, though, if you want an electric Nissan crossover then you should wait for the upcoming all-EV 2021 Ariya. 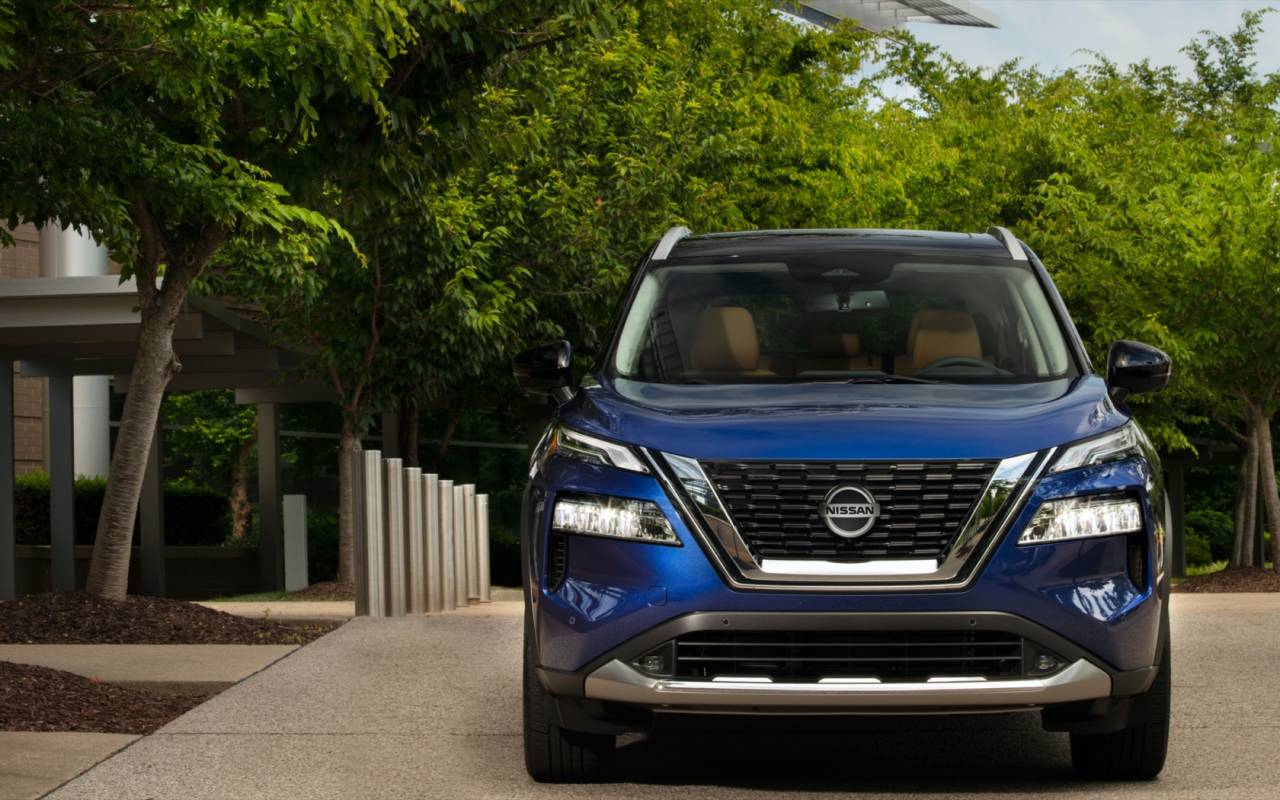 Electrification disappointment aside, the 2.5L is a solid engine and well-suited to the Rogue. Power arrives smoothly and the CVT lacks the rubber-bandiness that plagued older versions. You could almost mistake it for a regular automatic. Front-wheel drive is standard, and all-wheel drive a $1,400 option available on every trim.

With the new platform and chassis it’s stiffer, while the multilink rear suspension – replacing the old, dated trailing arm system – and new shock absorbers make a considerable improvement in ride comfort. Nissan has used double-piston shocks this time, allowing for two levels of tuning. Obviously it’s not as flexible as fully-adaptive damping might be, but it does mean that while the Rogue is compliant around town, it also doesn’t wallow unpleasantly on the backroads. 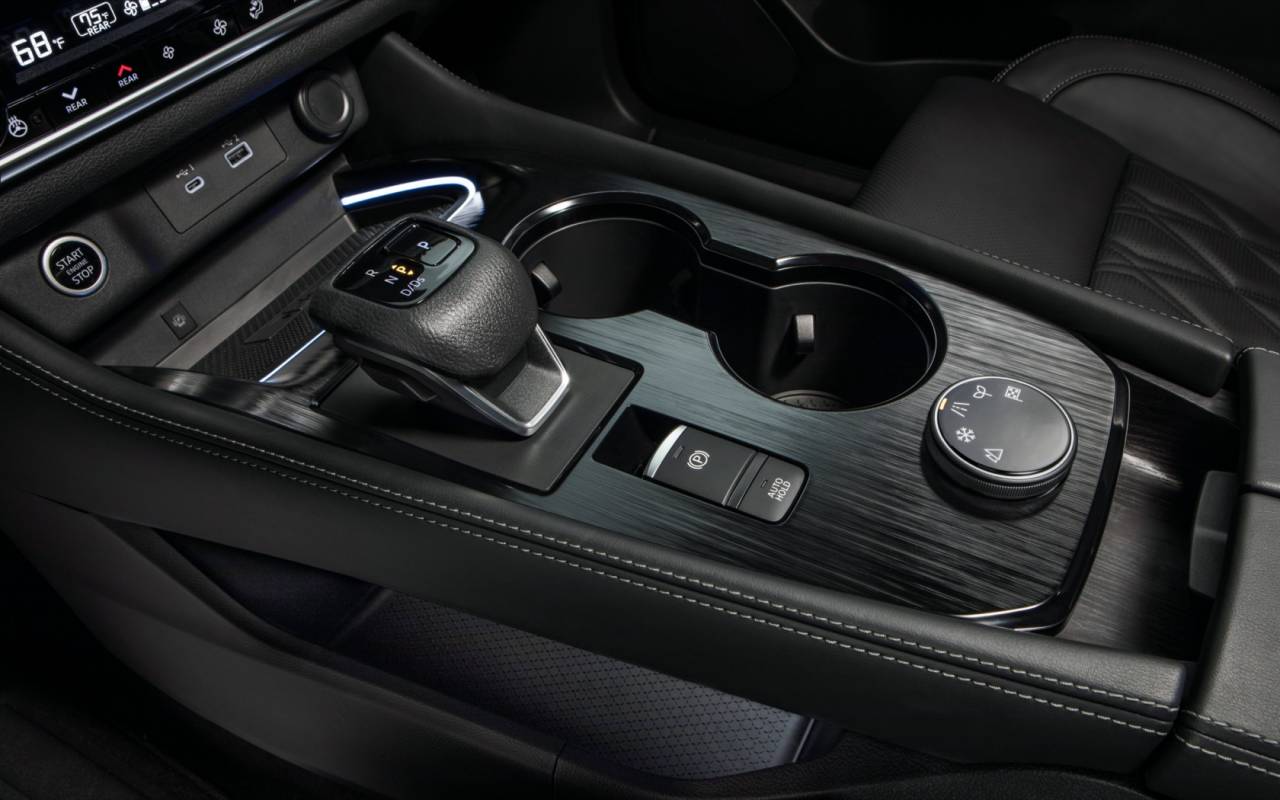 Switch to Sport mode, and things get a little less convincing. Then, the 2021 Rogue feels more frenetic than it anything else, with more noise but not in an especially pleasant way. Pickup is a little swifter, but there are no suspension or damping changes, and frankly the SUV doesn’t sound like it’s enjoying the experience. Neither, if I’m honest, was I.

Better, then, to settle back and enjoy what has taken a leap forward: the new Rogue’s fit, finish, and thoughtful design. Indeed what impresses me most about the new Rogue is how much more solid it feels than the old crossover. Perceived quality is important, and difficult to get right, because it’s mostly based on subconscious cues: how the door sounds when you close it; how the switchgear feels under your fingertip. The old Rogue had a slightly tinny, lackluster feel to it, I always thought; this new Rogue is elevated well above that. 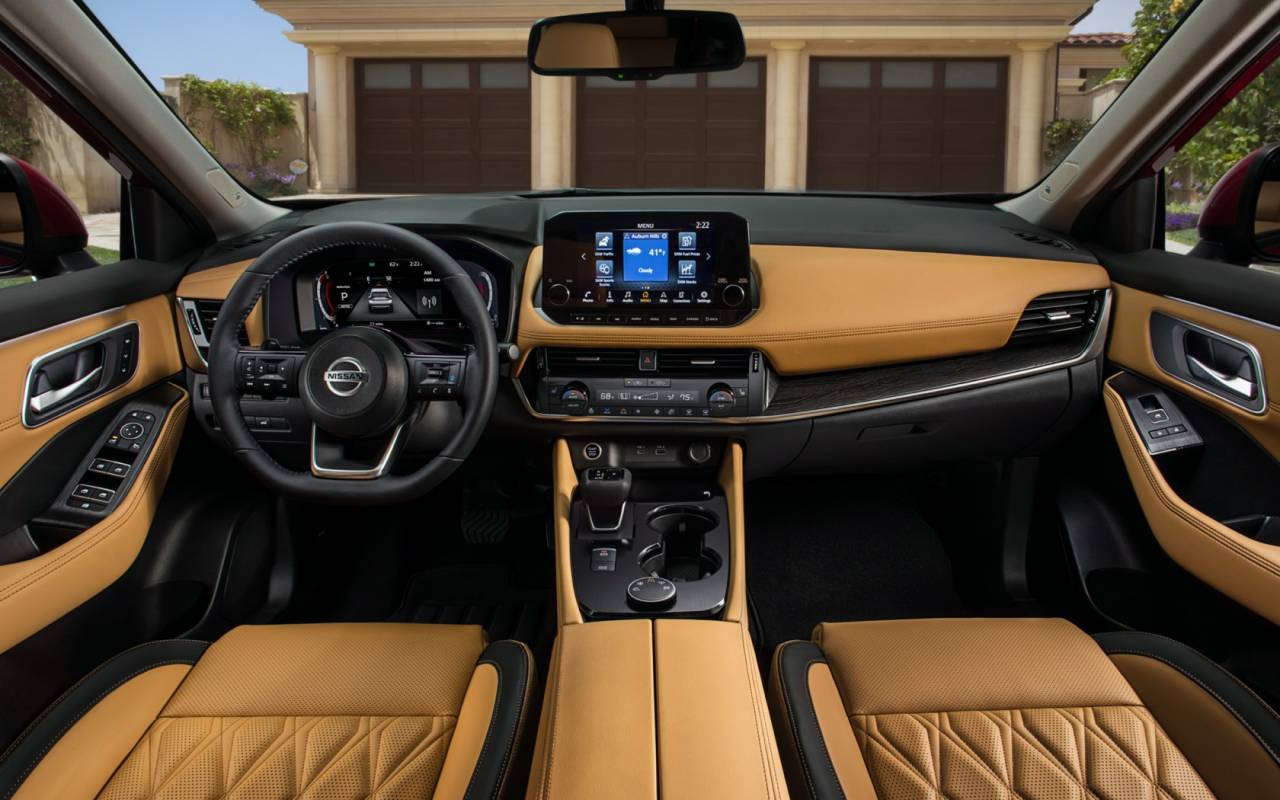 Areas of the dashboard that would likely have been hard plastic in the old Rogue are soft-touch in this 2021 upgrade. The outgoing SUV wasn’t poorly-equipped, but its niceties weren’t packaged up in a particularly pleasant or cohesive way. Now, not only does the SV trim – which Nissan expects to see the bulk of buyers opt for – come with a surprising number of extras, they feel designed-in rather than bolted-on.

Nissan Safety Shield 360 is standard across the board, now packing 10 airbags, front and rear auto-braking – the front having pedestrian detection – and the rear seatbelts now getting pretensioners and load-limiters. There’s more space in the back, but equally important there’s now a 5 point latch in the rear center seat, while the rear doors themselves open wider. It means that fitting a baby seat in the middle so that older kids can have the outboard seats is now possible, and it’s not quite so tricky to load that baby in and out, too. 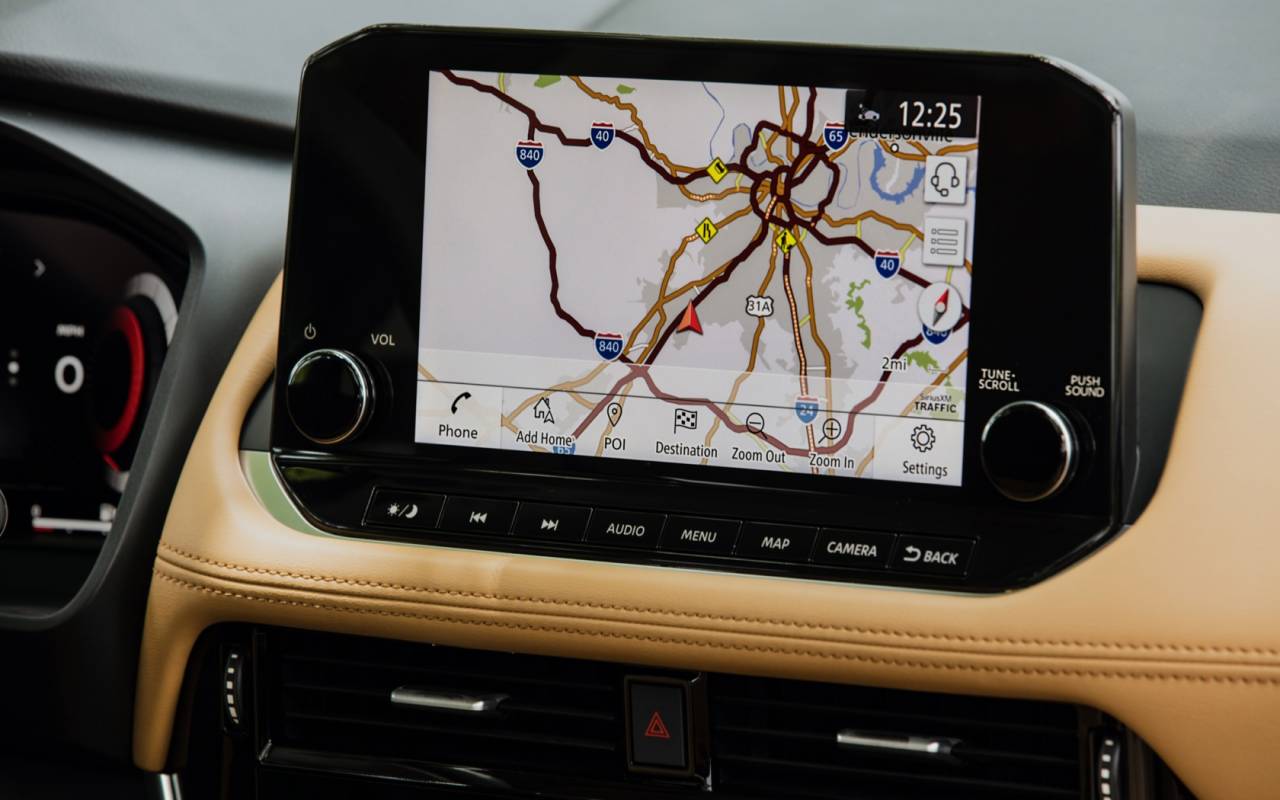 Even the $27,340 (FWD) Rogue SV gets a 360-degree camera and ProPILOT Assist, though, the latter Nissan’s adaptive cruise control system with hands-on lane keeping assistance. It now uses a longer range front radar, for smoother braking, quicker lane-marker detection, and better responses when other drivers cut in ahead of you. Opt for the Platinum or an SL with its $1,320 Premium Package, and you get Navi-link too, which taps the SUV’s navigation to predict when the cruise control should slow ahead of upcoming curves or exits when on limited-access highways. Navi-link also extends the ProPILOT Assist auto-restart timing from 3 to 30 seconds, and can automatically set the speed to the current road limit, if that changes along the way. 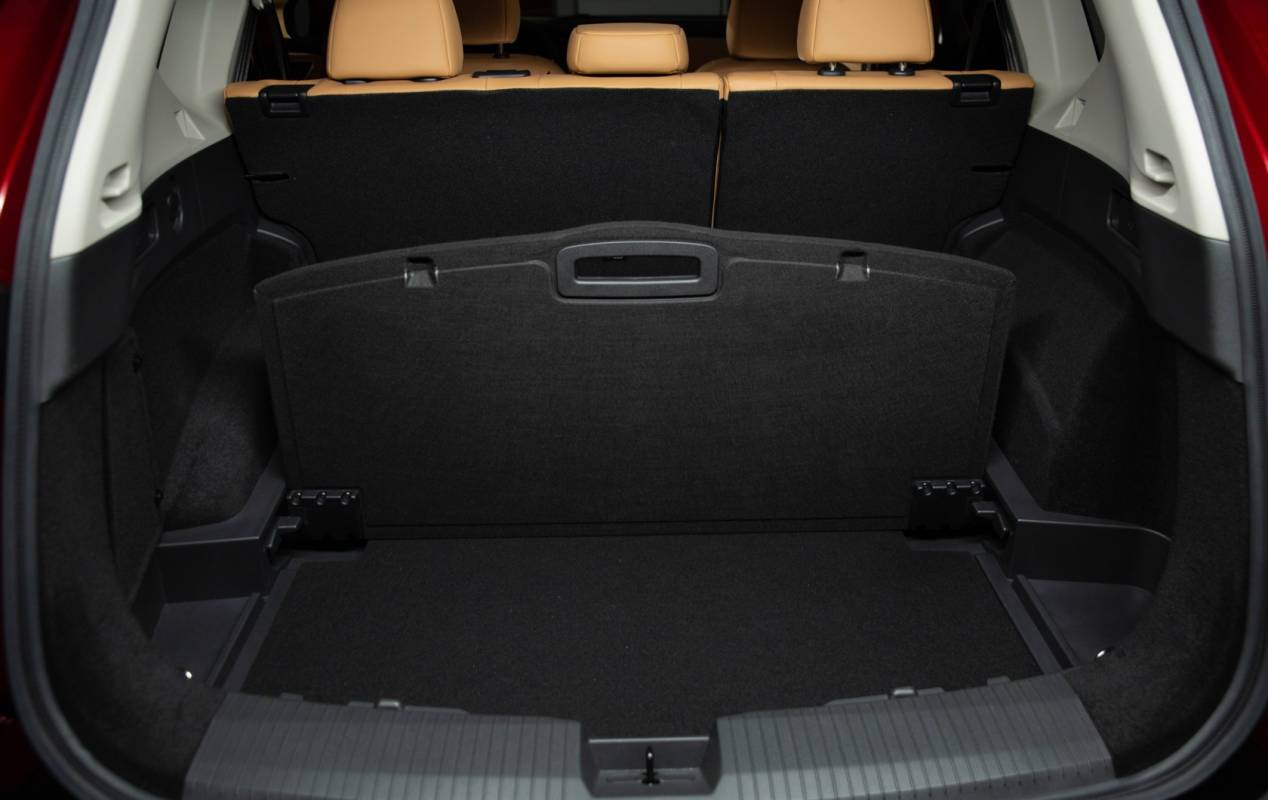 It’s all clever stuff, but personally the main reason to look to the Rogue SL would be the nifty Divide-N-Hide system in the trunk. Two panels allow you to section off the trunk to stop shopping or equipment from tumbling around, or to hide a lower storage area. Unlike the old Divide-N-Hide, there are now no shoulder-level brackets to eat into the overall 36.5 cu-ft of cargo space. Rogue S and SV models get 31.6 cu-ft total. Drop the rear seats, meanwhile, and that expands to 74.1 cu-ft.

Even the entry $25,650 (FWD) Rogue S trim benefits from the larger door pockets, more space in and under the center console, a nook designed to safely hold a gallon of milk upright in the trunk, and a cabin that generally offers more knee and headroom than before. There are up to two USB-A ports and two USB-C divided between the first and second rows, while the updated graphics on the 8-inch center touchscreen are a vast improvement over the dreary UI in the old Rogue. You get Apple CarPlay and Android Auto as standard, too. 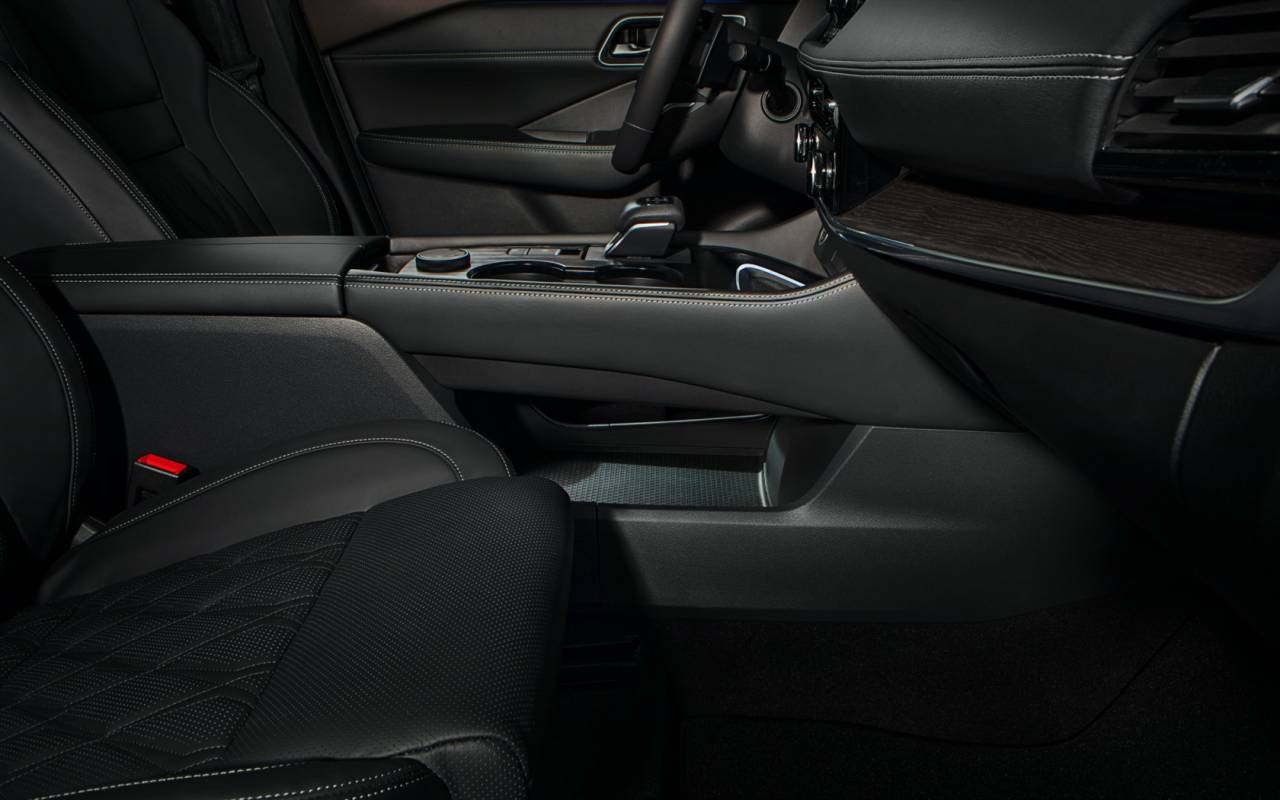 It’s not a clean-sweep, mind. While the Platinum trim will eventually get wireless CarPlay, it’ll be a late arrival, and there’s no wireless Android Auto at all. You can get heated rear outboard seats now, but there’s still no ventilated front seat option.

I’m nitpicking, though, because there really is a whole lot here to like. Nissan is under no misconception as to just how important the new Rogue is, particularly in the North American market. Not only is it the automaker’s best-seller, it kicks off a speedy cadence that should see 10 new products in the next 20 months – six of which, Rogue included, will arrive by the end of 2021. For a lineup that could generously be described as idling for some time now, that’s an ambitious but entirely necessary endeavor. 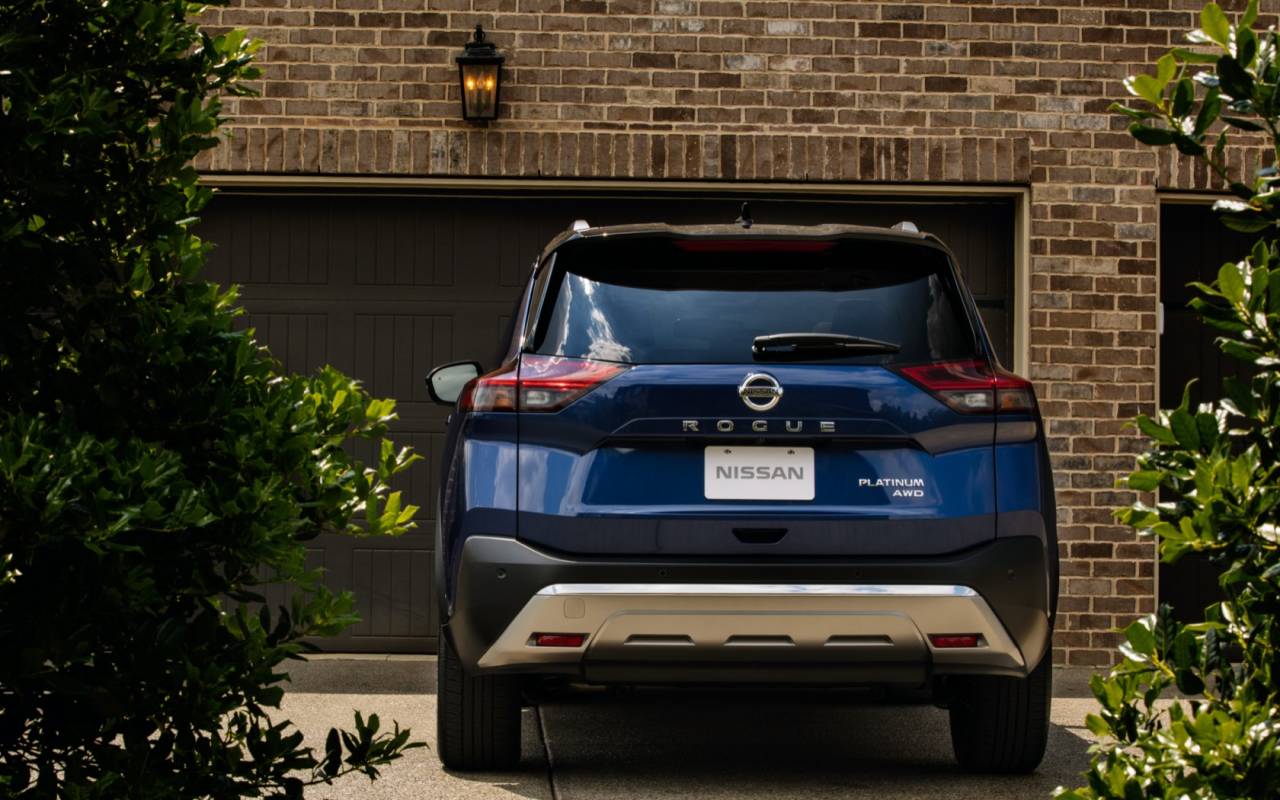 Plug-in hybrid absence aside, the 2021 Rogue sets that reinvention up nicely. Priced aggressively, memorable on the outside, practical inside, and making a commitment to active safety tech many rivals are yet to fully embrace, it’s a huge upgrade over the old Rogue. If Nissan can maintain that momentum, the next two years could be more interesting for the company than anything from its past decade.