Honda has pulled the wraps off arguably its most important new car, with the 2022 Civic Sedan promising an uptick in styling and tech as it acts as a gateway for the young drivers automakers are chasing. Sticking close to the prototype Honda teased us with late last year, the production Civic Sedan paves the way for the upcoming hatchback, Si, and enthusiast-favorite Civic Type R.

For now, though, it’s the 2022 Civic Sedan which gives us a taste of what Honda has in mind for this 11th generation car. In many ways simplified over the old car, there’s a less complex grille and a new, lower hood and front fenders; the horizontal beltline has been lowered, too.

The base of the windshield pillars has been pushed back by nearly 2-inches, adding length to the hood. The side mirrors are mounted on the doors, and there’s a sharper character line from the front fender to the taillights. They’re wider-set and LED now, framed with stronger rear shoulders and an upswept, integrated trunk lid spoiler. 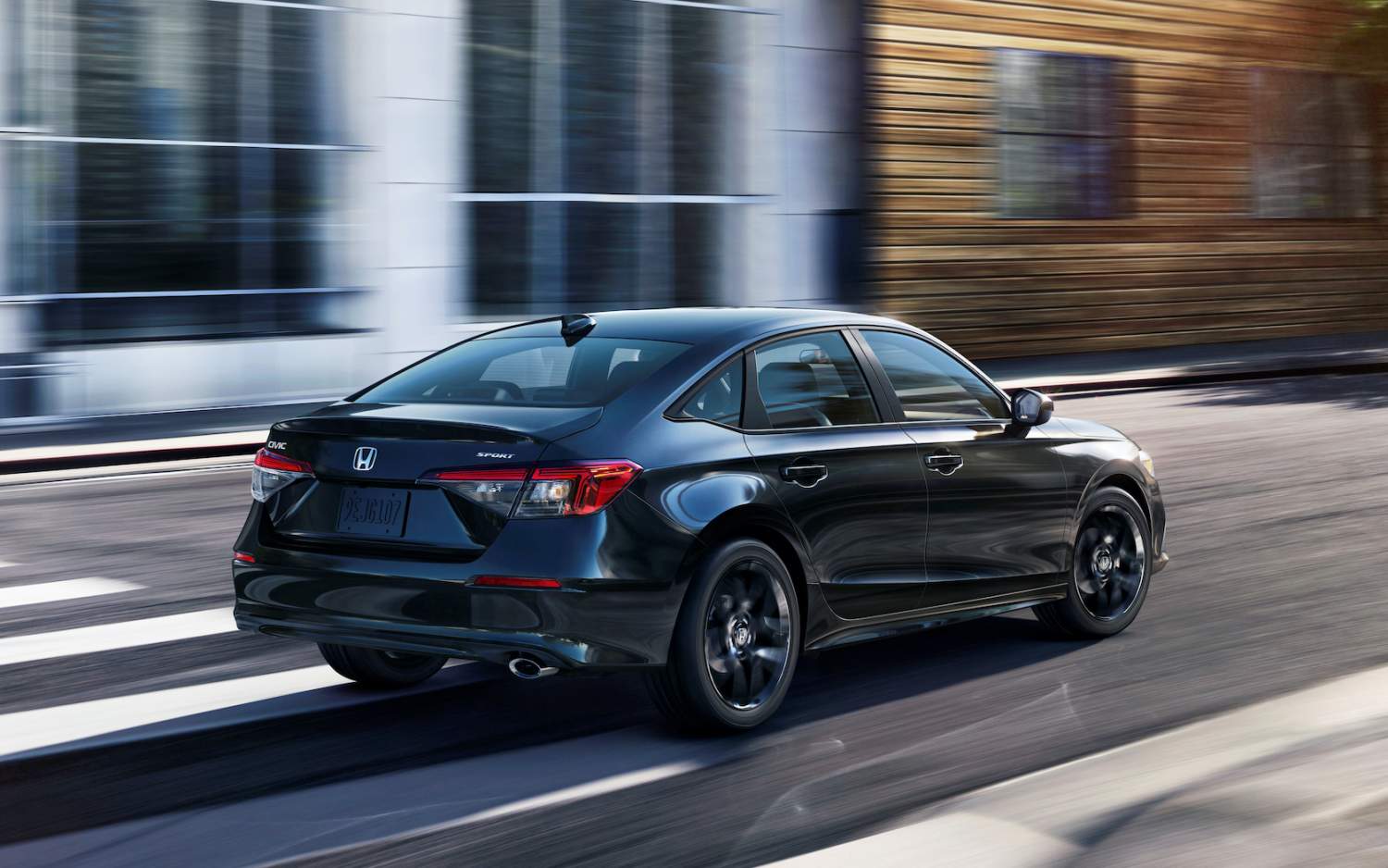 At the front, the lighting is also LED, with fog lamps an option. As well as the existing colors, there’ll be three new finishes: Meteorite Gray Metallic, Sonic Gray Pearl, and Morning Mist Blue Metallic, the latter of which is brand new and exclusive to the Civic.

There’ll be two engines on offer to begin with for the 2022 Civic. The LX and Sport trims will get a naturally-aspirated 2.0-liter 4-cylinder, with 158 horsepower and 138 lb-ft of torque. It’ll be paired with an updated CVT, with Honda promising more refinement and more economy. 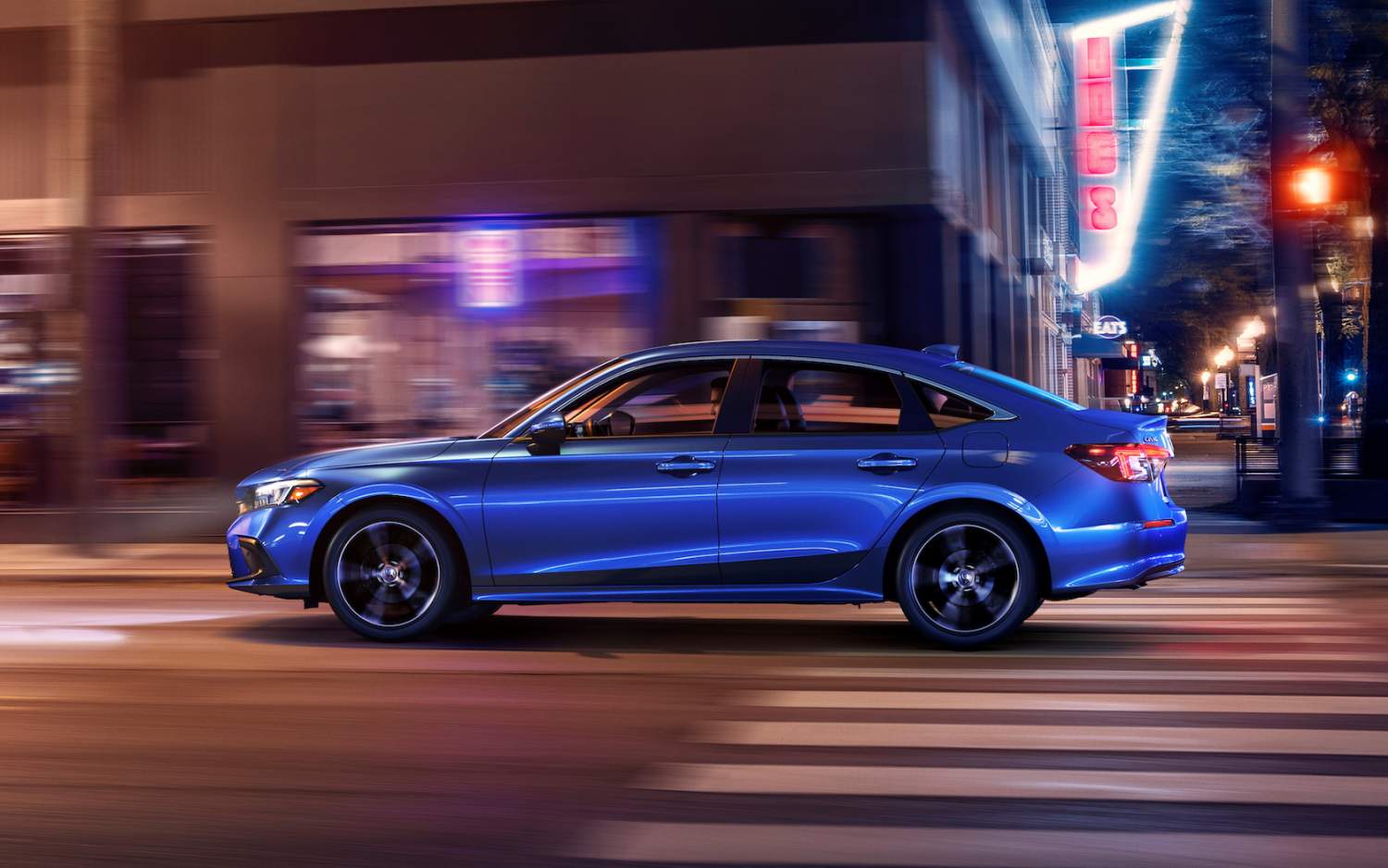 Notably, along with the standard Normal and Eco modes, both the 2.0L Sport and the 1.5L Touring versions of the 2022 Civic also get a new Sport mode. Switched on with a toggle underneath the gear shifter, it promises tweaks to the drive ratios and mapping for a more engaging drive. It also switches the instrumentation lighting to red. The CTV has paddle shifters on those trims, too. 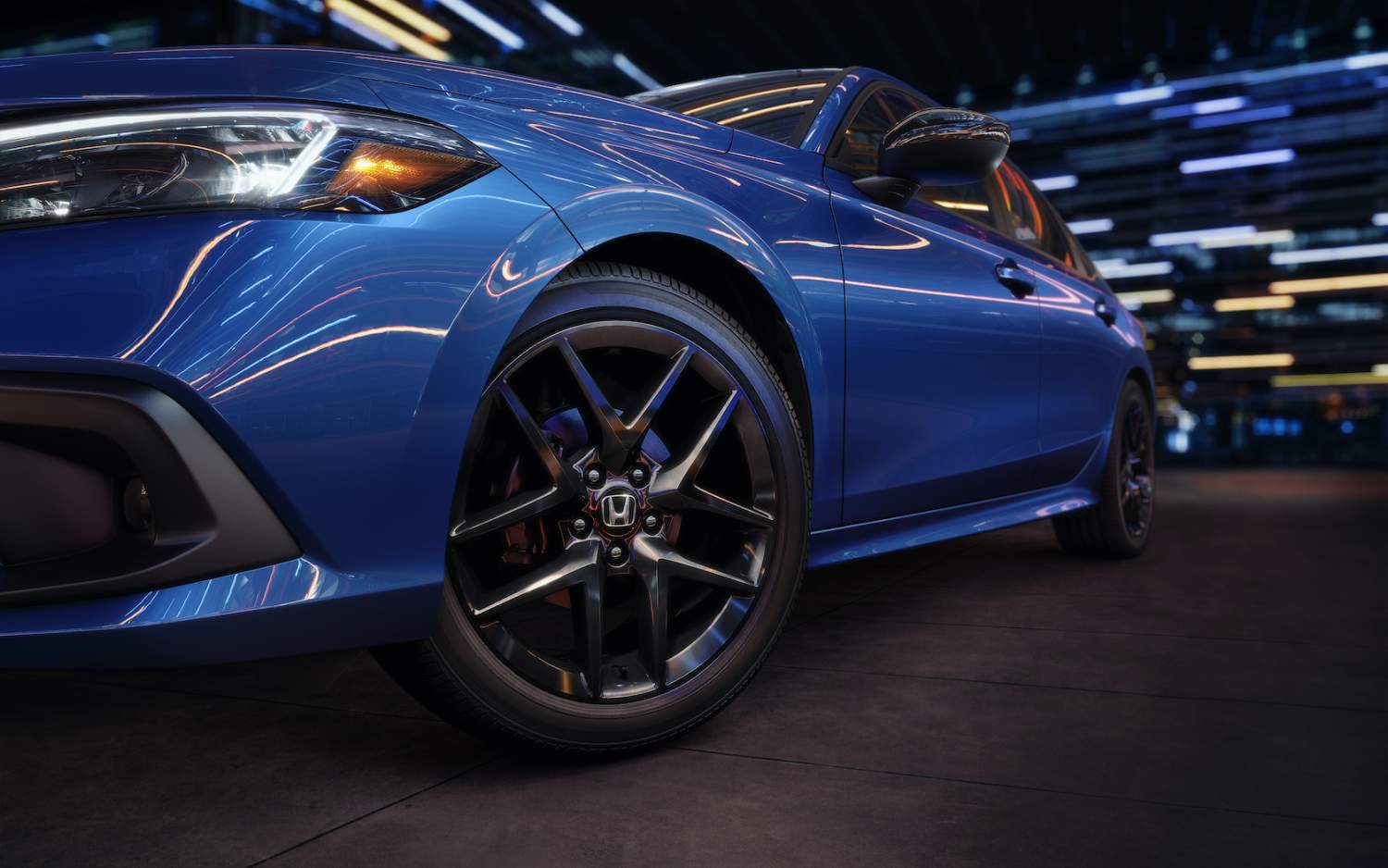 Helping make things more engaging should be the new suspension and chassis. There’s a 1.4-inch longer wheelbase for a smoother ride, Honda promises, while the front MacPherson struts have been tweaked with things like new low-friction ball joints and front damper mount bearings. The result is an uptick in steering feel and self-centering.

At the back, the track has been nudged half an inch wider for more stability, and there are new bushings on the two rear lower arms to cut noise and vibration in the cabin while also improving stability and turn-in. The electronic power steering is retuned, while Honda says the 2022 Civic should be 20-percent smoother over harsher road shocks, like potholes and railroad crossings.

Conspicuous by its absence, however, is electrification. Although Honda has made some big commitments recently to shifting to EVs, the Civic still doesn’t offer even a mild-hybrid drivetrain, never mind a plug-in hybrid or pure-electric option. That could hurt Honda among those younger drivers it’s hoping to court.

Inside, Honda is trying out a new design language, though also promising mainstays like excellent visibility thanks to the low hood, flat dashboard top, and hidden windshield wipers. The repositioned side mirrors help there too, while even the top of the instrumentation panel has been designed with as few cutlines as possible to avoid distractions from the road and reflections off the windshield. 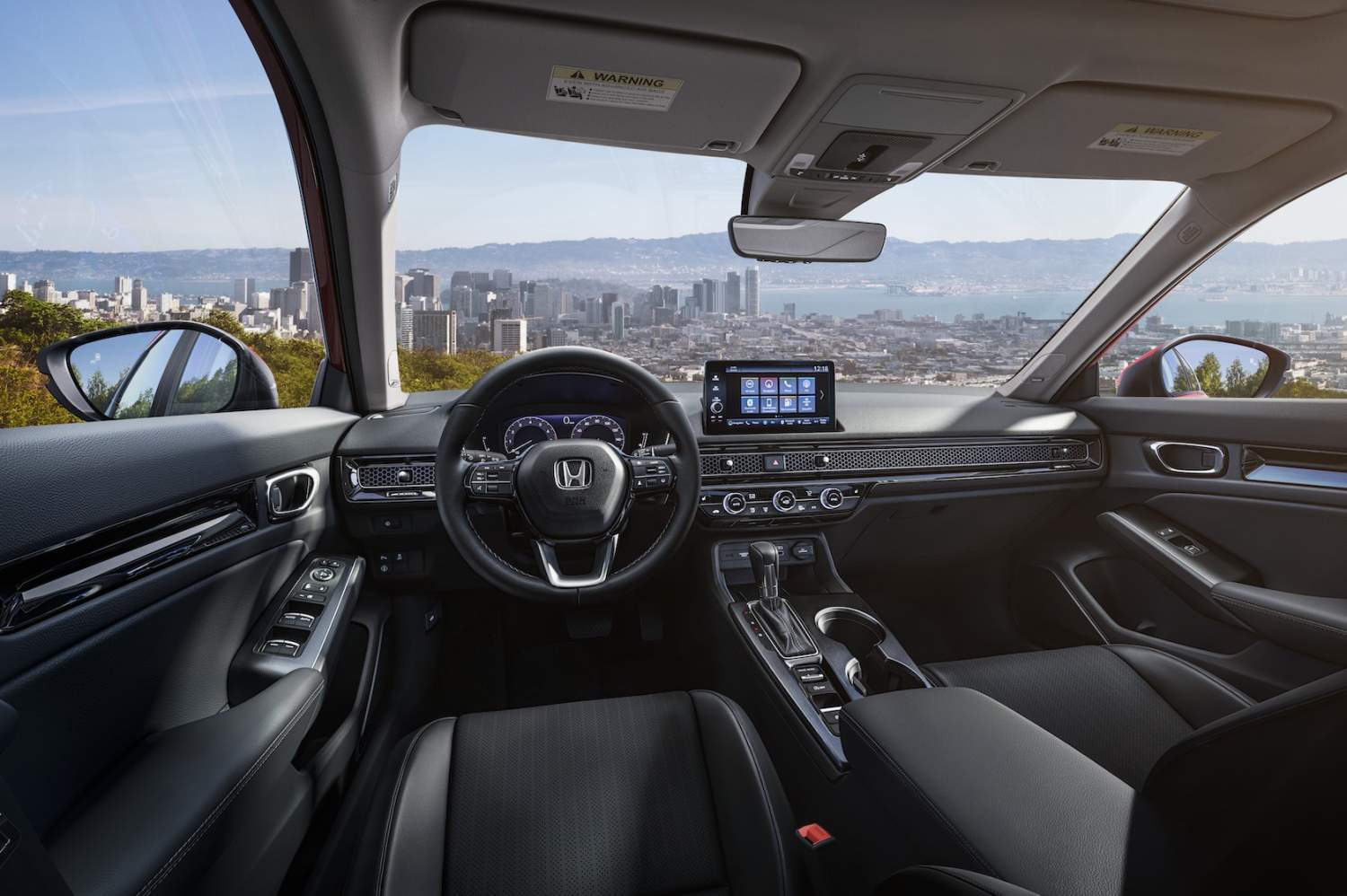 Cutting across the dashboard is a metal honeycomb mesh, which hides the vents. Protruding joysticks control the direction of the airflow. Honda says it paid extra attention to the common touch-points, both to make them feel premium but also hard-wearing, like fingerprint-resistant center console trim. There are also new front seats for improved extended comfort. 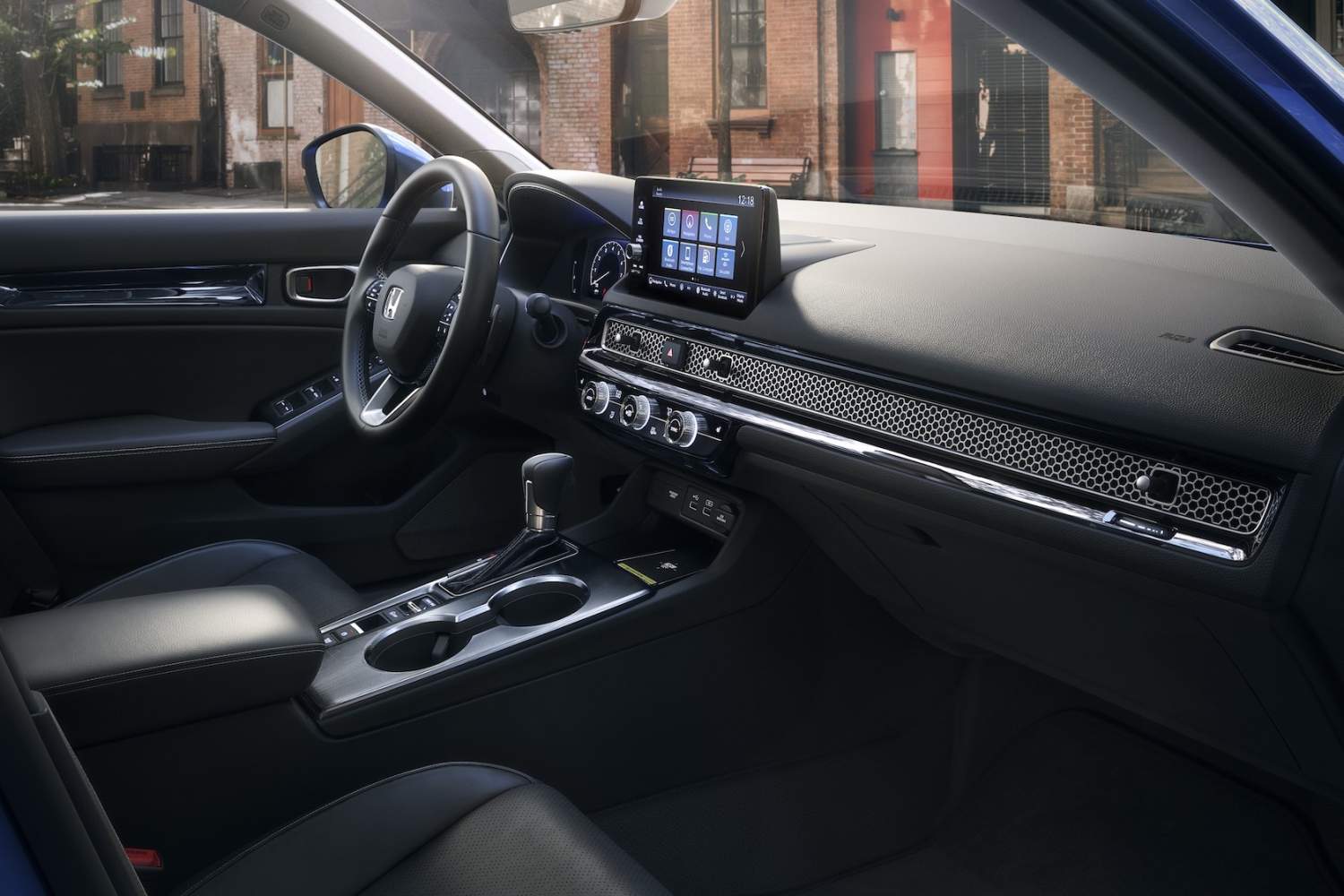 Most trims have a partial digital instrument display, with a 7-inch LCD; Touring upgrades that to fully-digital, a 10.2-inch panel with customizable information. As for the center console, LX, Sport, and EX trims get a 7-inch touchscreen as standard, with both a physical volume knob and a tuning/selection knob. Hard buttons underneath can skip tracks and change inputs. There’s wireless Apple CarPlay and Android Auto support. 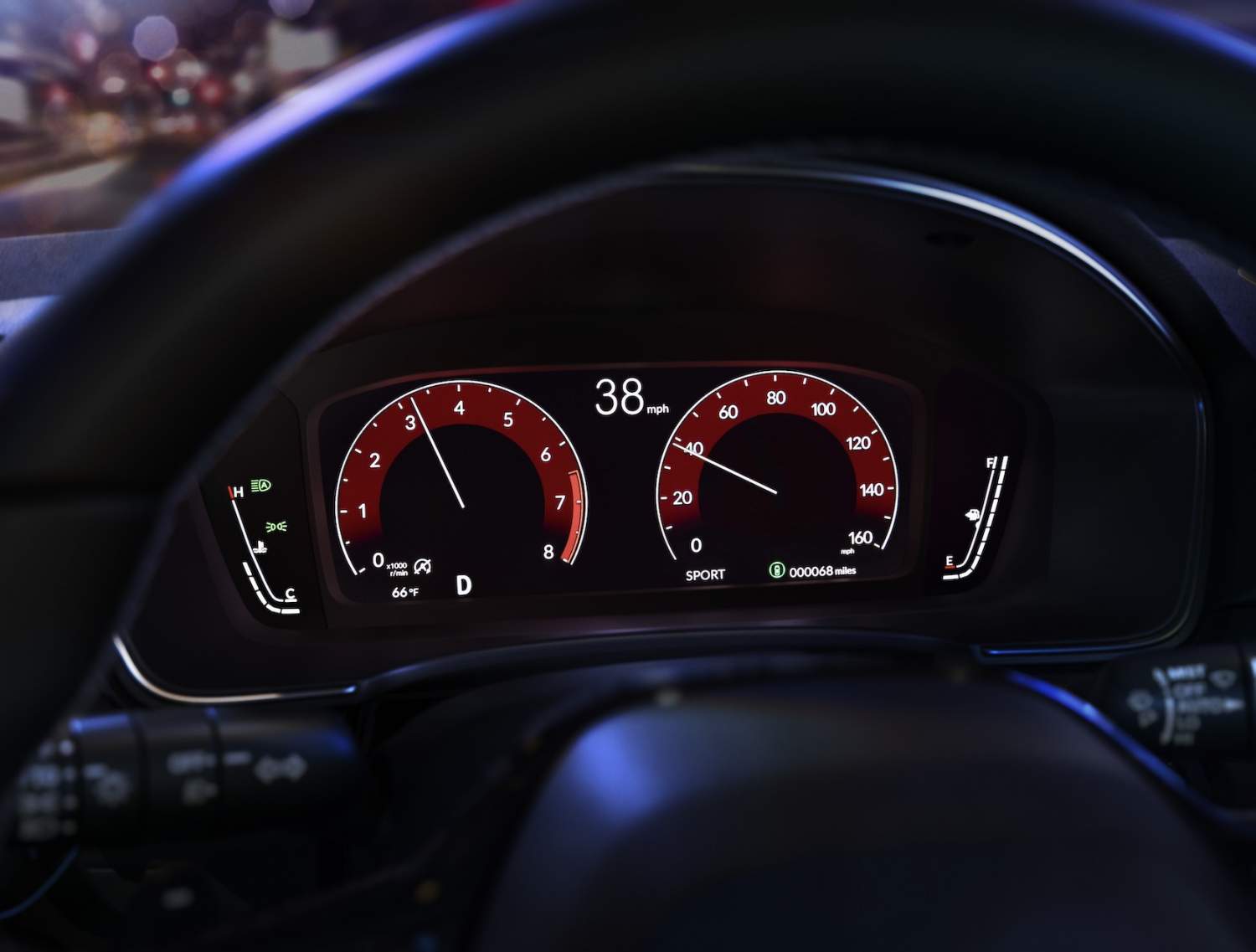 In the 2022 Civic Touring, meanwhile, there’s a 9-inch touchscreen, Honda’s largest ever in any of its vehicles. It, too, gets a physical volume knob, with hard buttons for Home and Back. A Qi wireless charging pad is standard on Touring trim, too, plus a Bose Premium Sound System.

That has Bose Centerpoint 2 and Bose SurroundStage, with 12 channels and a digital amp. It also includes Dynamic Speed Compensation, adjusting volume and tone automatically according to vehicle speed. 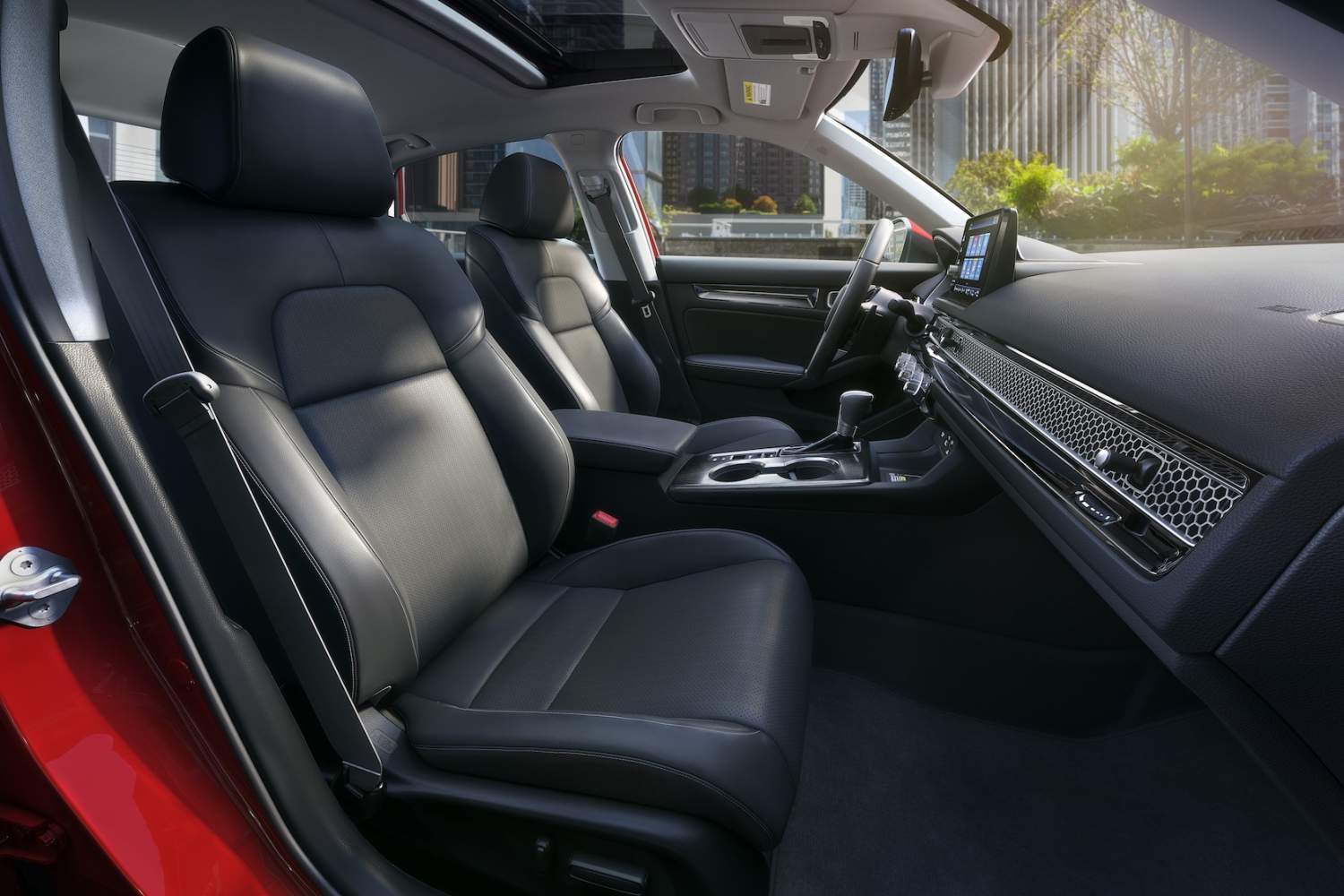 For safety, Honda Sensing is standard. It switches to a single-camera approach, rather than the old radar and camera hybrid, with a more powerful processor so that identifying pedestrians, cyclists, other vehicles, road lines, and road signs is quicker. Adaptive Cruise Control now promises more natural braking and quicker reactions too, while Traffic Jam Assist has been added, and the Lane Keeping Assist System is more linear and natural, Honda says. 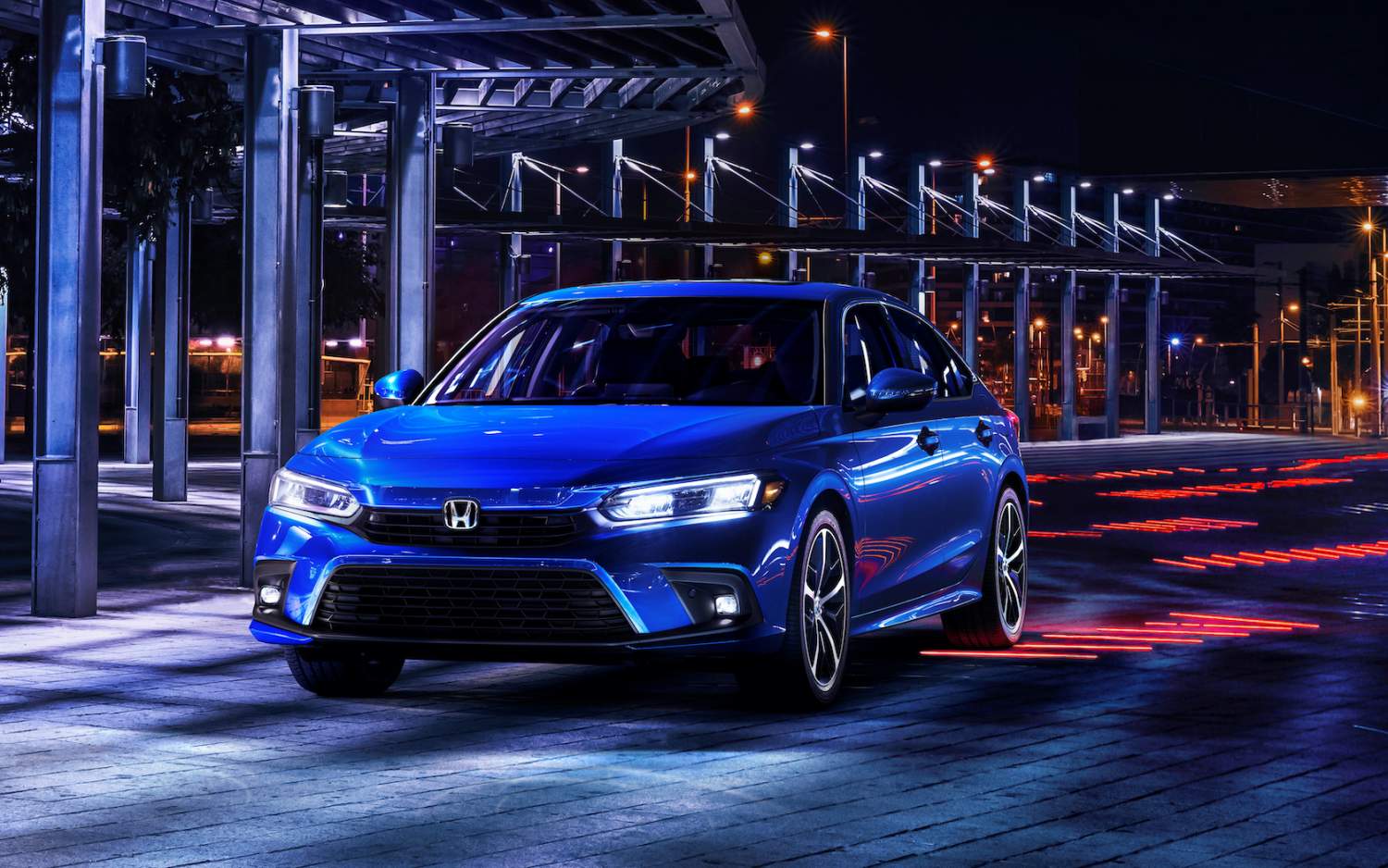 Eight sonar sensor have been integrated, granting the 2022 Civic Low-Speed Braking Control along with front and rear false-start prevention. Both the driver and front passenger airbags use new designs, which are crafted to cradle and support the occupants’ heads in the case of a crash. That, Honda says, helps avoid twisting that has been shown to contribute to brain trauma during off-angle frontal collisions. For those outside, there’s a new front bumper and hood design intended to cut pedestrian leg and head injuries in collisions. 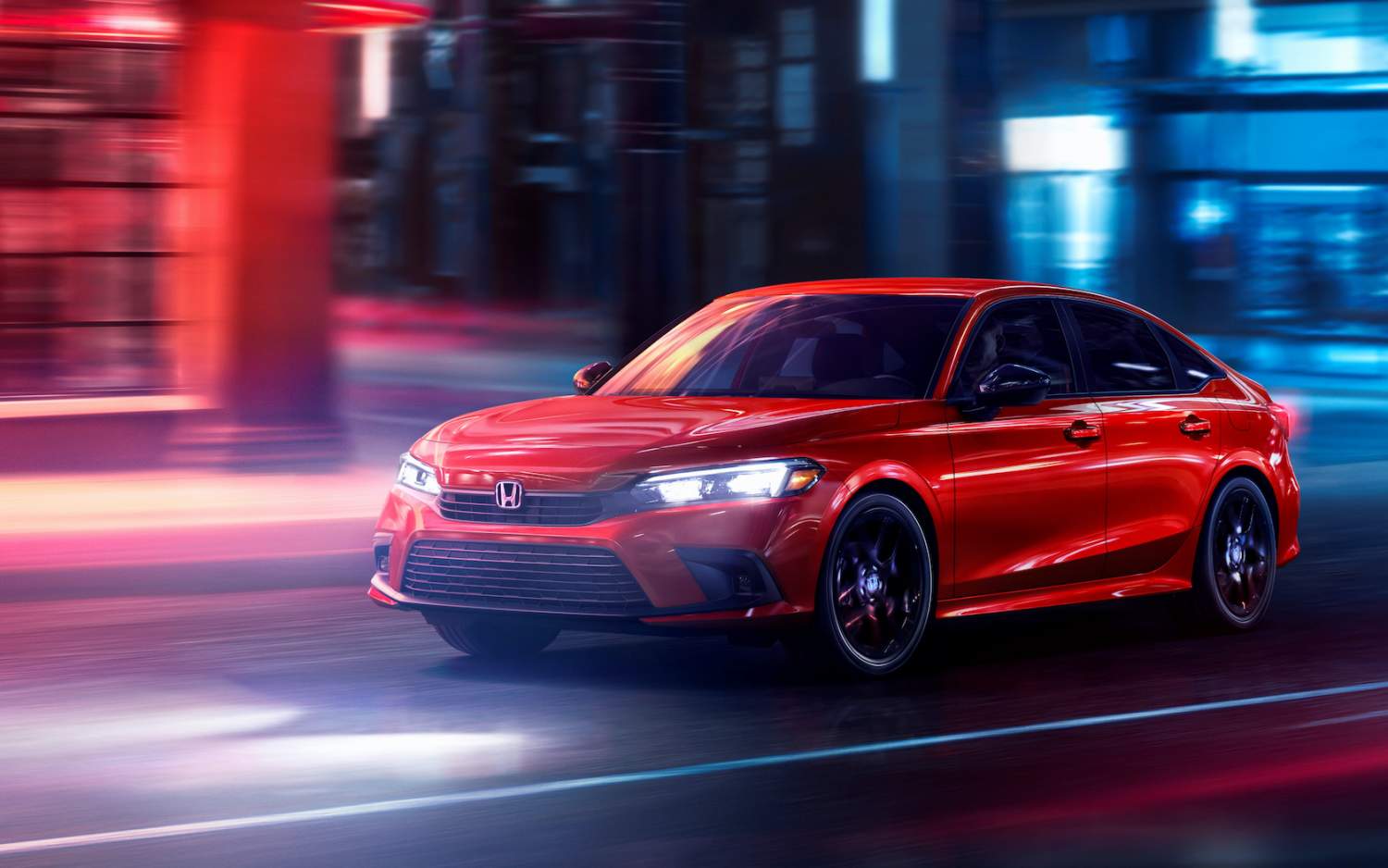 Honda will produce the 2022 Civic Sedan in its Alliston, Ontario plant in Canada. The upcoming Civic Hatchback, however, will now be manufactured in the US, at the Greensburg, Indiana plant.

Pricing for the 2022 Civic Sedan will be announced closer to the car’s launch, which is expected this summer.