When you’re making a brand new, electric version of your bestselling model, you need to do it properly, and Ford is taking no chances with the 2022 F-150 Lightning. The first EV iteration of the perennially-popular pickup, it combines a head-turning price tag with solid range and some legitimately clever side-talents, including the ability to power your whole home in the case of an outage. 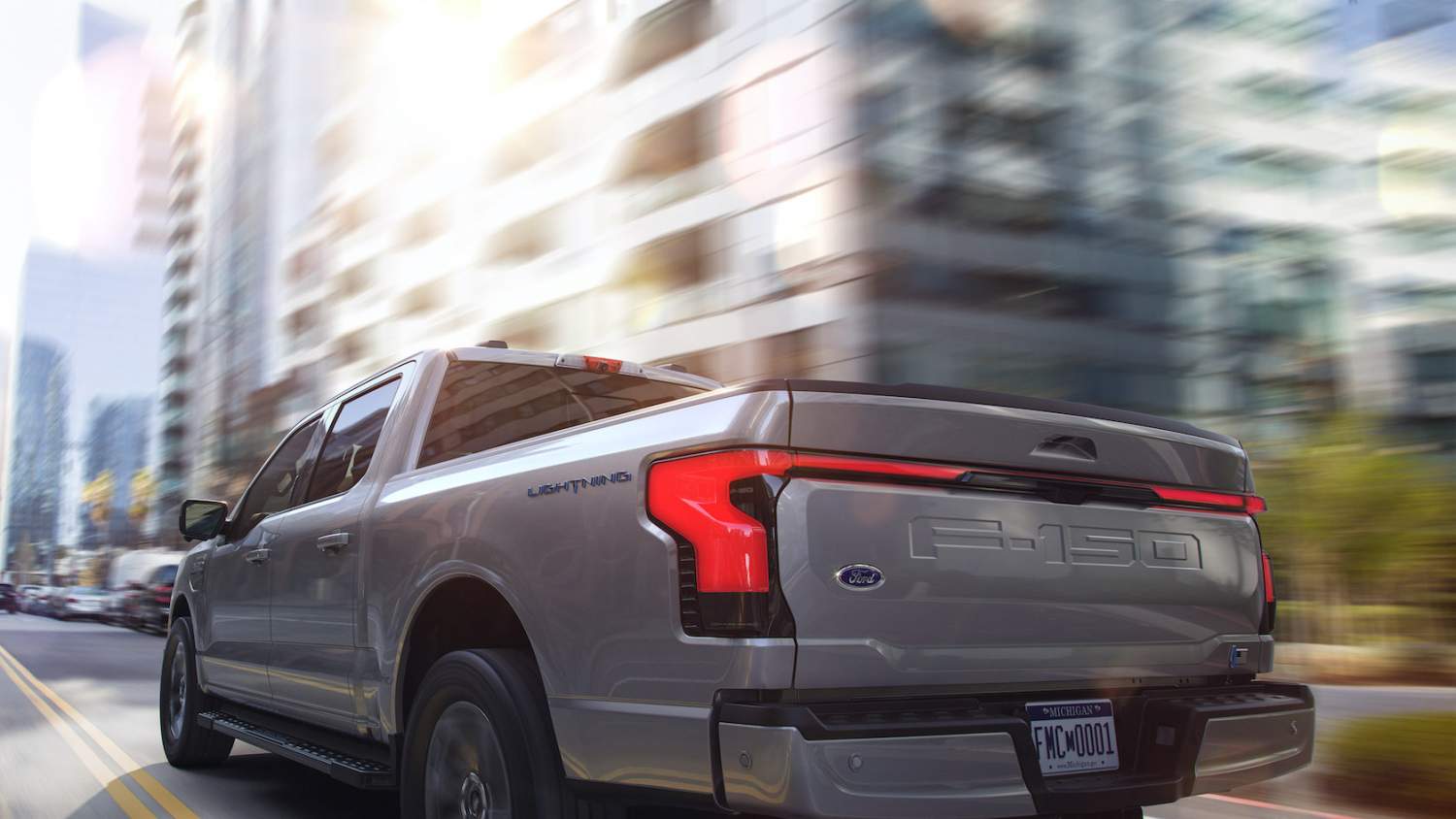 Production of the electric pickup will kick off at Ford’s renovated and expanded Rouge complex, in Dearborn Michigan, with the first deliveries in 2022. Reservations are open now, with a $100 refundable deposit to stake a place in line. Currently, Ford expects the current US federal tax incentive of up to $7,500 to apply to F-150 Lightning sales, though the accuracy of that prognostication will of course depend on demand for the automaker’s EVs in the meantime.

If you could use one word to describe the new F-150 Lightning and its potential appeal to Ford truck drivers, then “familiar” might be your pick. Rather than the spaceship-esque electric pickup designs we’ve seen from other EV truck companies, Ford has stuck to its familiar F-150 design language, and by intent. After all, when you have a bestseller to play with, straying too far from that sales success seems like a bad idea. 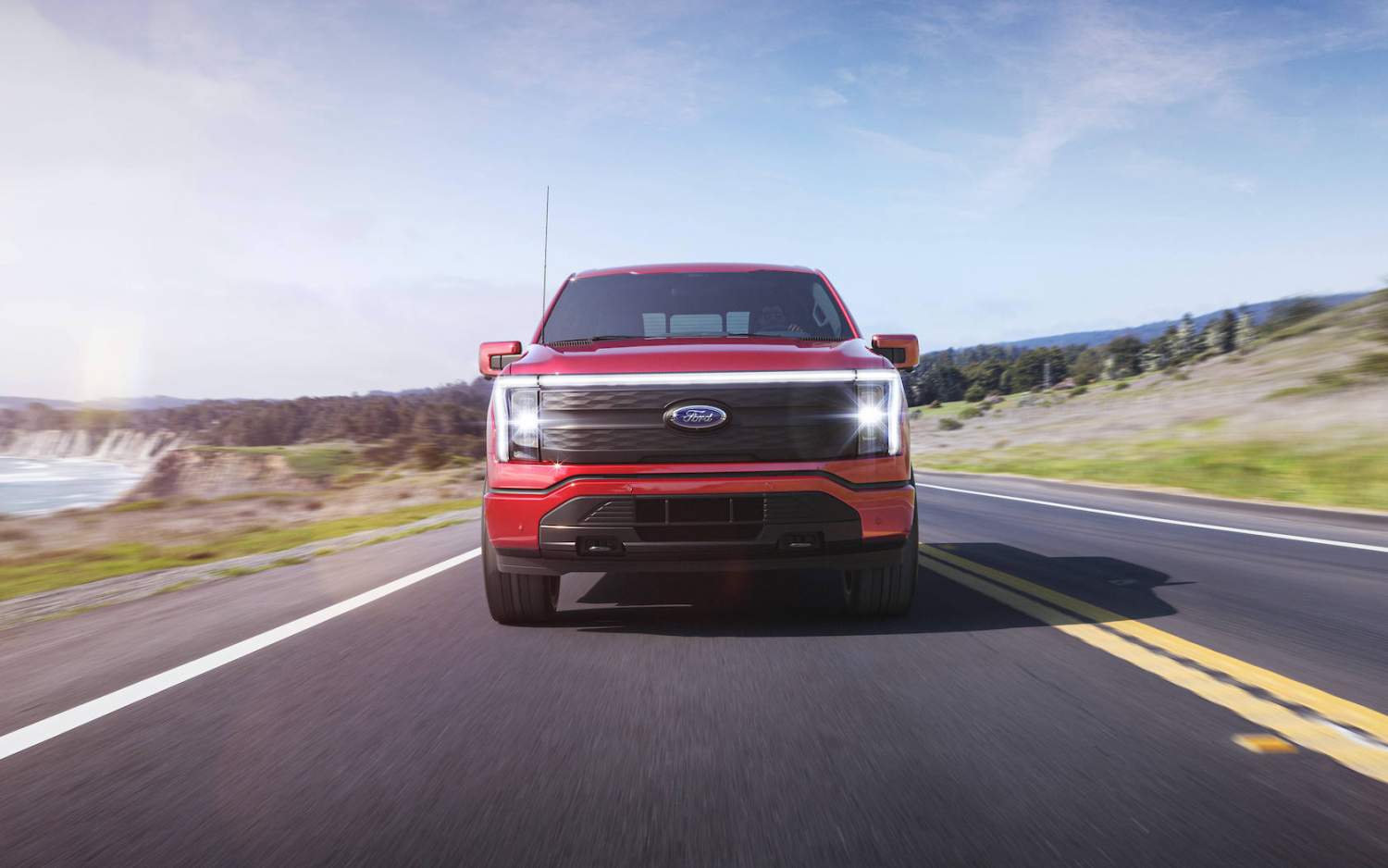 So, you get the same three-box profile, though Ford says the F-150 Lightning is actually the most aerodynamically-slippery in the model’s history. That includes new running board shapes, different sculpting for the hood, and grilles that blank out unnecessary cooling vents to help cut drag.

Just as when it switched to the aluminum body, Ford is doubling-down on durability promises. The electric F-150 goes through the same battery of punishing torture-testing that the gas version has to pass, while the liquid-cooled batteries get a sheet-molded composite single-piece battery cover to protect them in their position in the truck’s wheelbase. 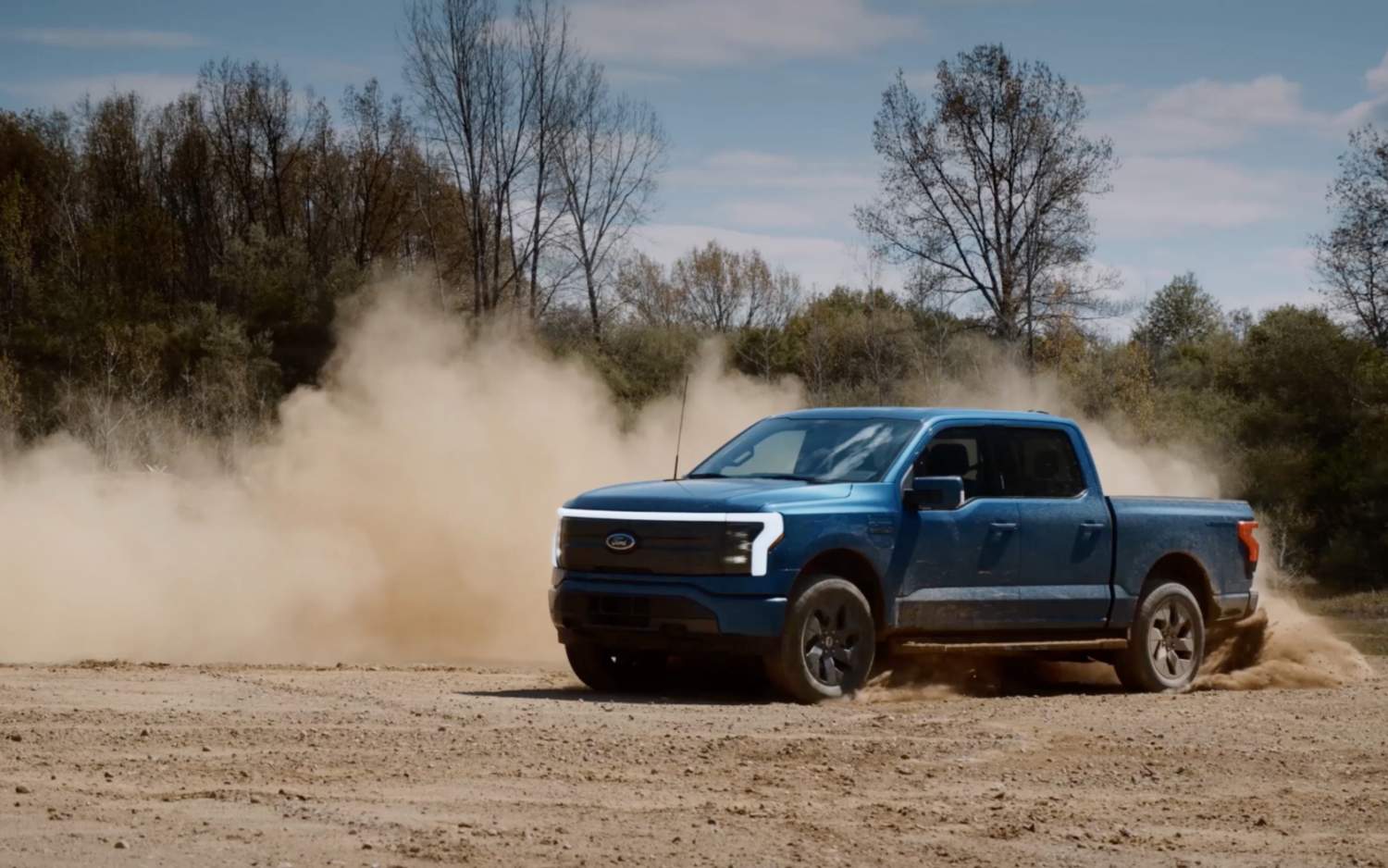 There’ll be four trims in total – Commercial, XLT, Lariat, and Platinum – and initially all will be SuperCrew cab configurations with seating for up to five, and a 5.5 foot box on the back. Underneath, though, there’s an all-new frame with Ford using its strongest steel yet, to handle the extra weight of the electric drivetrain. That adds about 1,000 pounds to the curb weight, versus a 3.5 PowerBoost F-150.

The distinctive LED light bars at the front and the rear will be available, helping identify the EV nature of the truck, and 360-degree Zone Lighting will also be optional. That can illuminate specific task areas, or the whole periphery of the pickup. Since the bed and cab dimensions are shared with the gas F-150, though, existing accessories designed for that model can be used with the Lightning too. 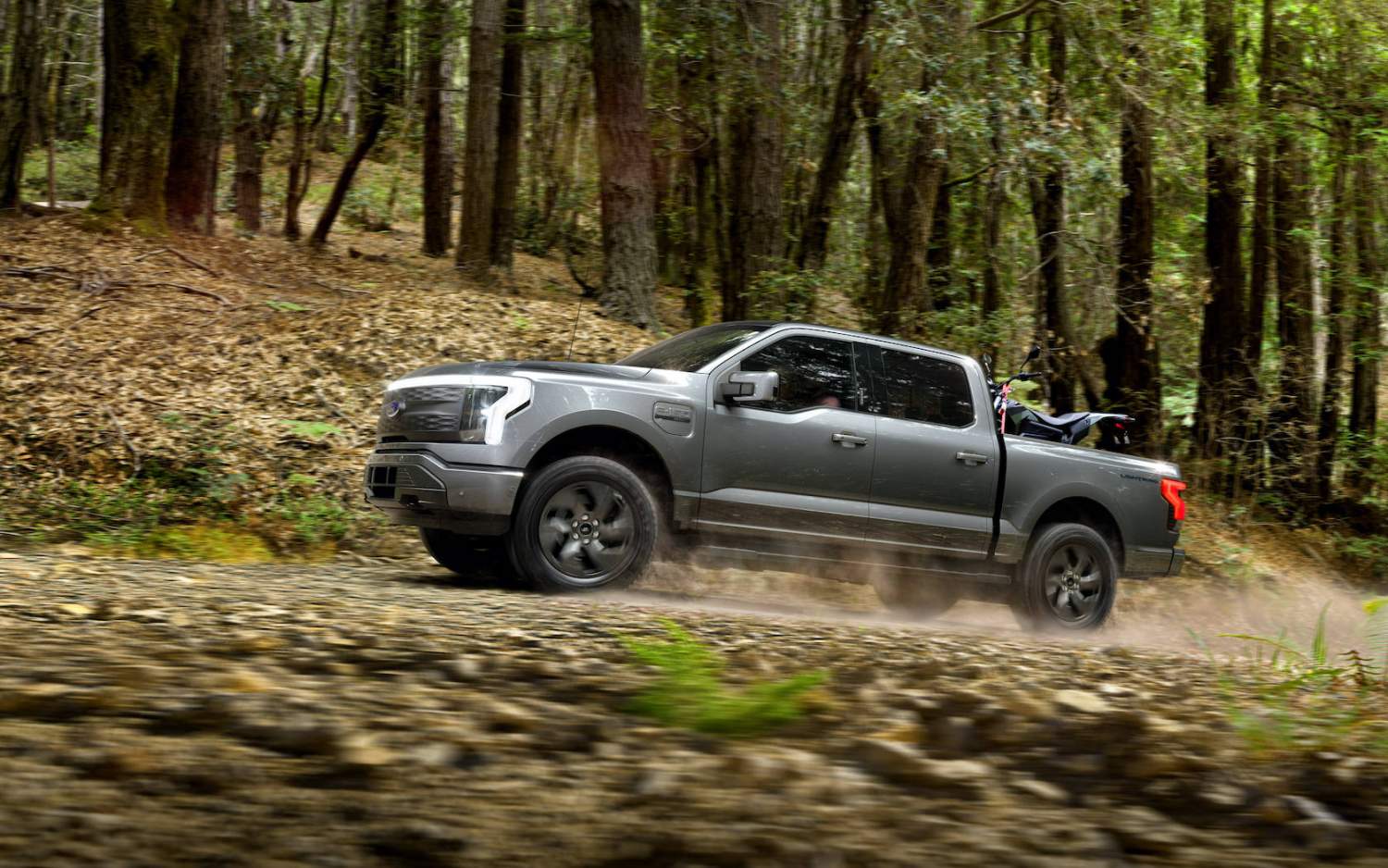 Ford is keeping it straightforward with F-150 Lightning configurations. “There is no wimpy version,” chief engineer Linda Zhang says: 4×4 is standard, using dual inboard motors. Both the Standard and Extended Range models are targeting the same 775 lb-ft of torque, though horsepower and towing capacity varies depending on battery size. 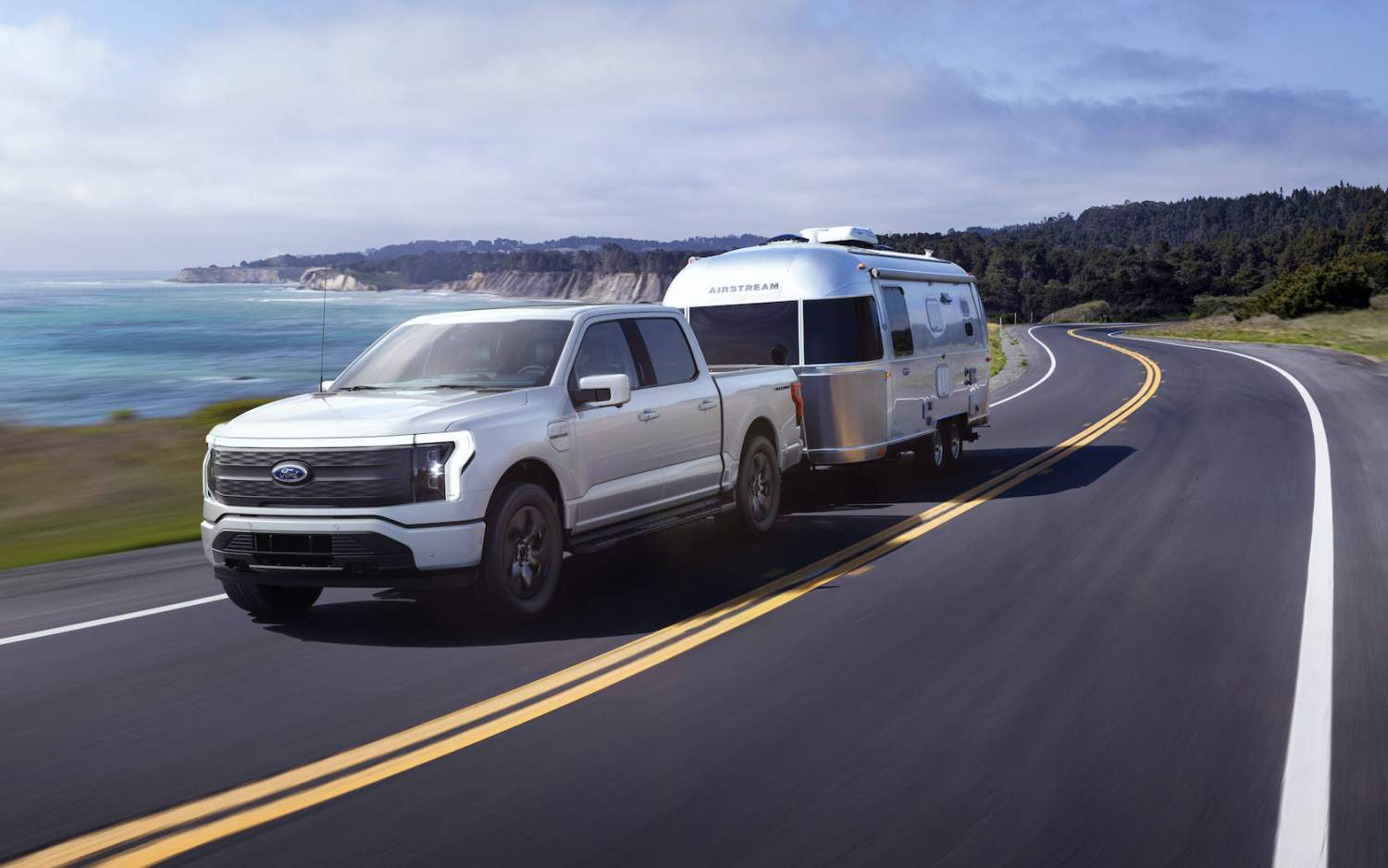 Platinum trim will get the Tow Technology Package as standard. That has Pro Trailer Backup Assist and Hitch Assist, Trailer Reverse Guidance, the Trailer Brake Controller, Smart Hitch, Onboard Scales, Trailer Camera, and Smart Trailer Tow Connection. Platinum also gets the Maximum Trailer Tow Package. Both packages are optional on the XLT and Lariat. 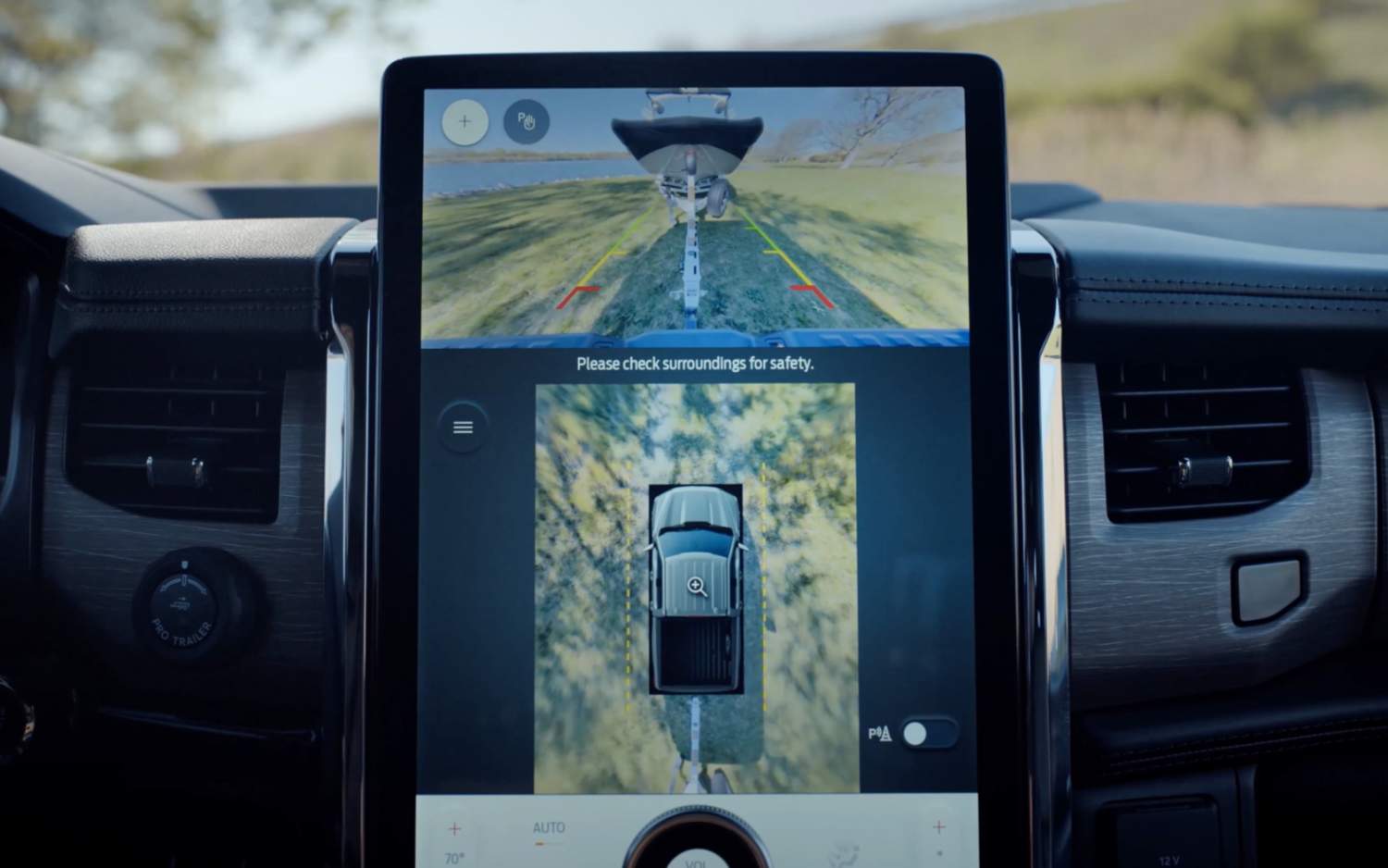 Four drive modes will be offered, selected via the cabin touchscreen: Normal, Sport, Off-Road, and Tow/Haul. All will support one-pedal driving, though drivers will be able to turn that off, and the Off-Road mode will have an e-locker.

All versions of the electric pickup come with the 32A Ford Mobile Charger that supports 110V and 240V use; Ford also offers a 48A Connected Charge Station, and a new 80A Ford Charge Station Pro. There’s 150 kW DC fast charging support on the F-150 Lightning, too, for use with public chargers that the FordPass Charging Network can help you track down. 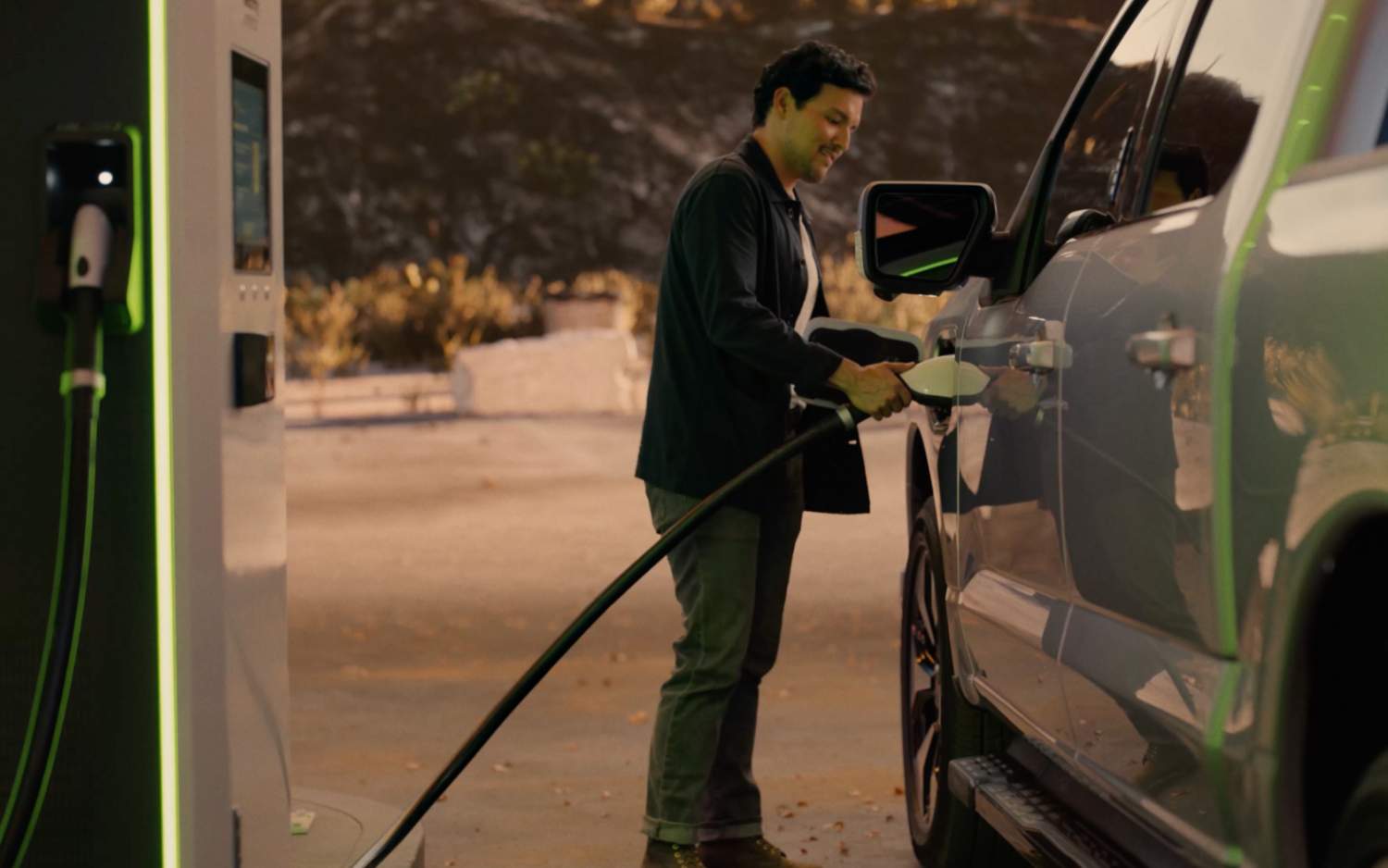 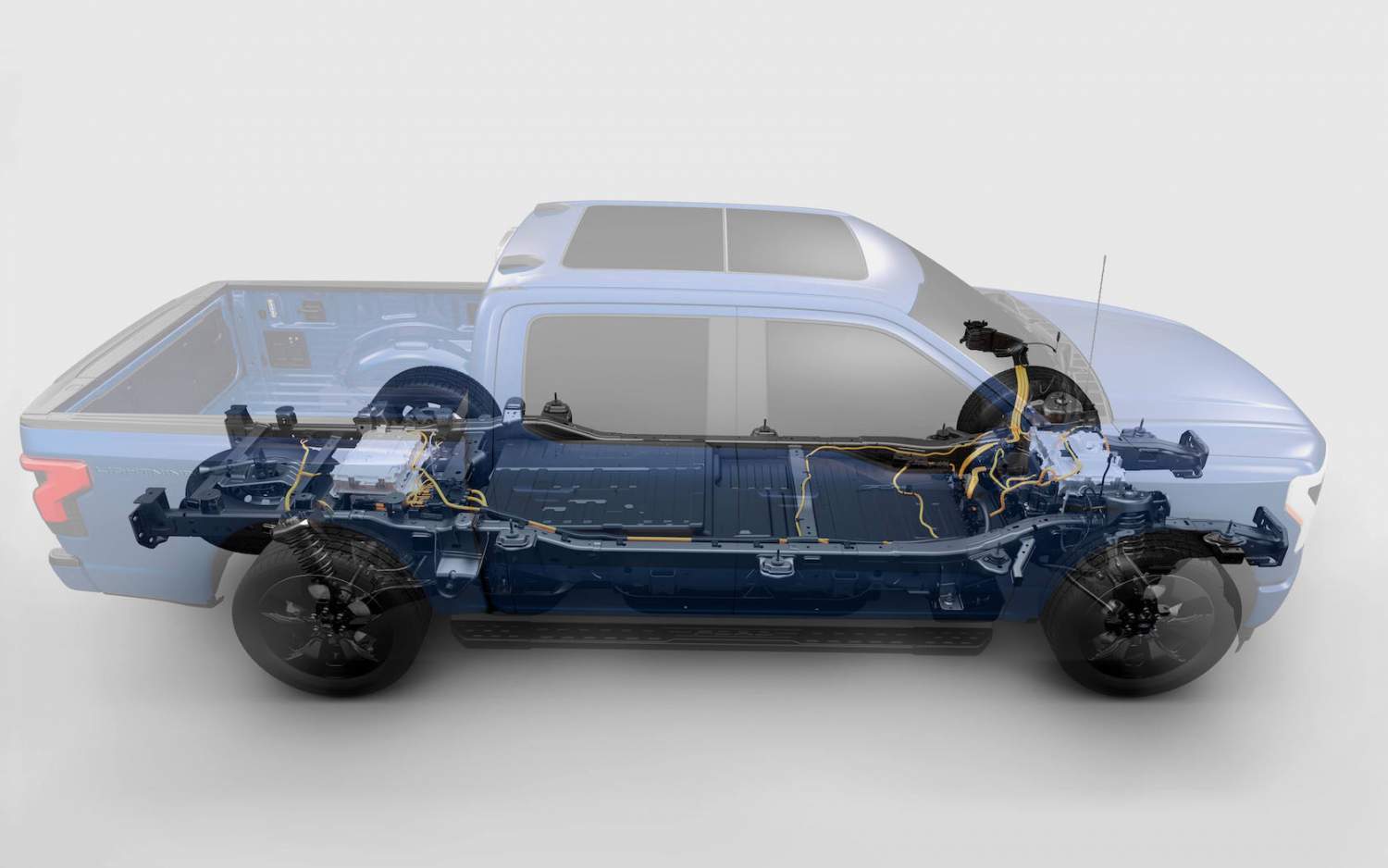 How the F-150 Lightning calculates range will be special, too. It’ll take into account, for instance, not only traffic conditions on your route but weather and even wind direction. You’ll be able to input what you’re towing, and the rough shape of it, and have those factors taken into consideration as well: if you’re towing a tall billboard, for example, the aero hit of that will be built into the range-remaining gauge. 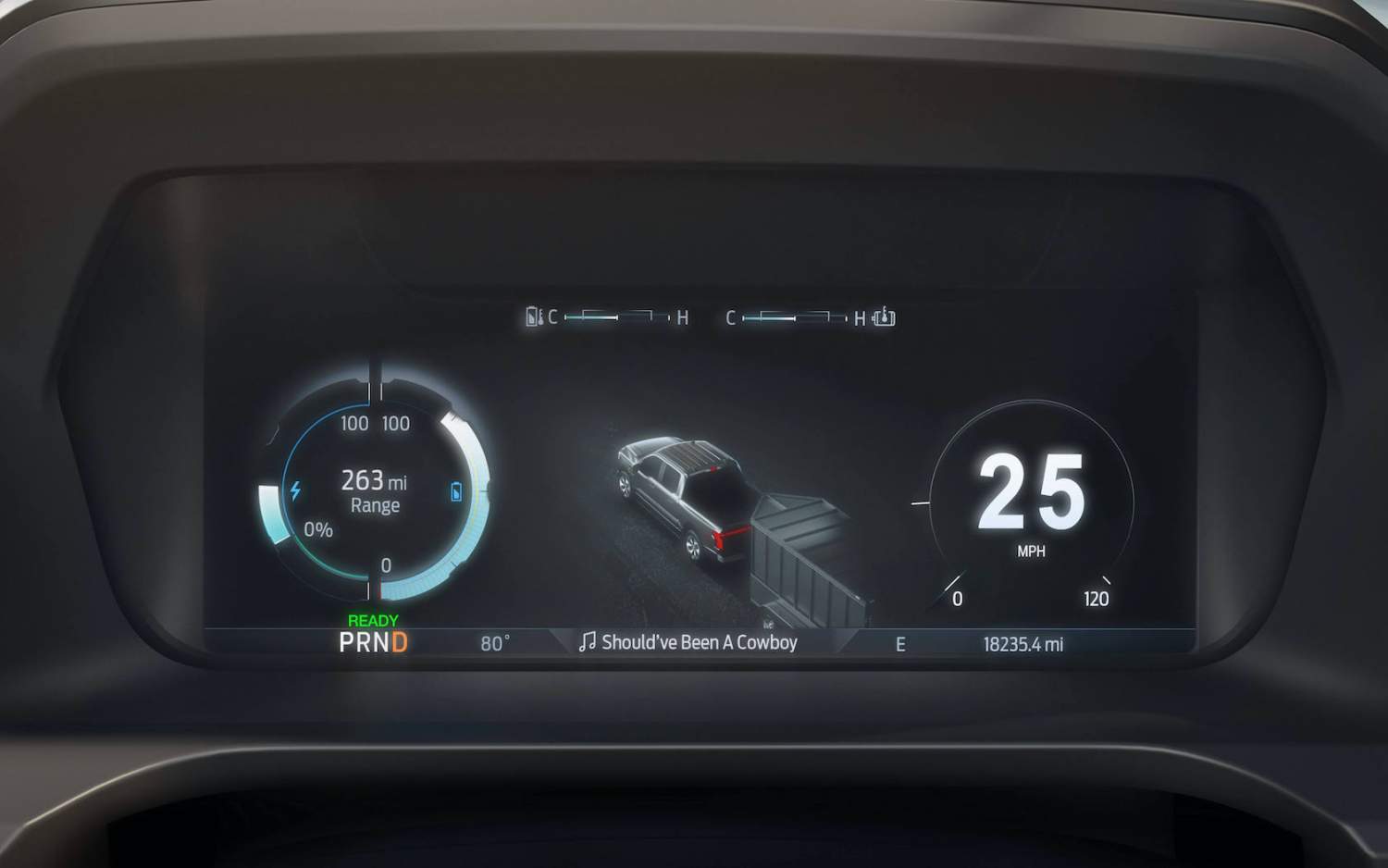 Much as in the Mustang Mach-E, individual ownership and driving styles will also play a role. If you typically preheat the cabin while the F-150 Lightning is still plugged into a charger, for example, and then use more energy-efficient things like seat heating rather than cranking up the HVAC, you’ll get a higher range estimate. Similarly, if you drive with a lead foot rather than frugally, the truck will figure that into its calculations over time, too. 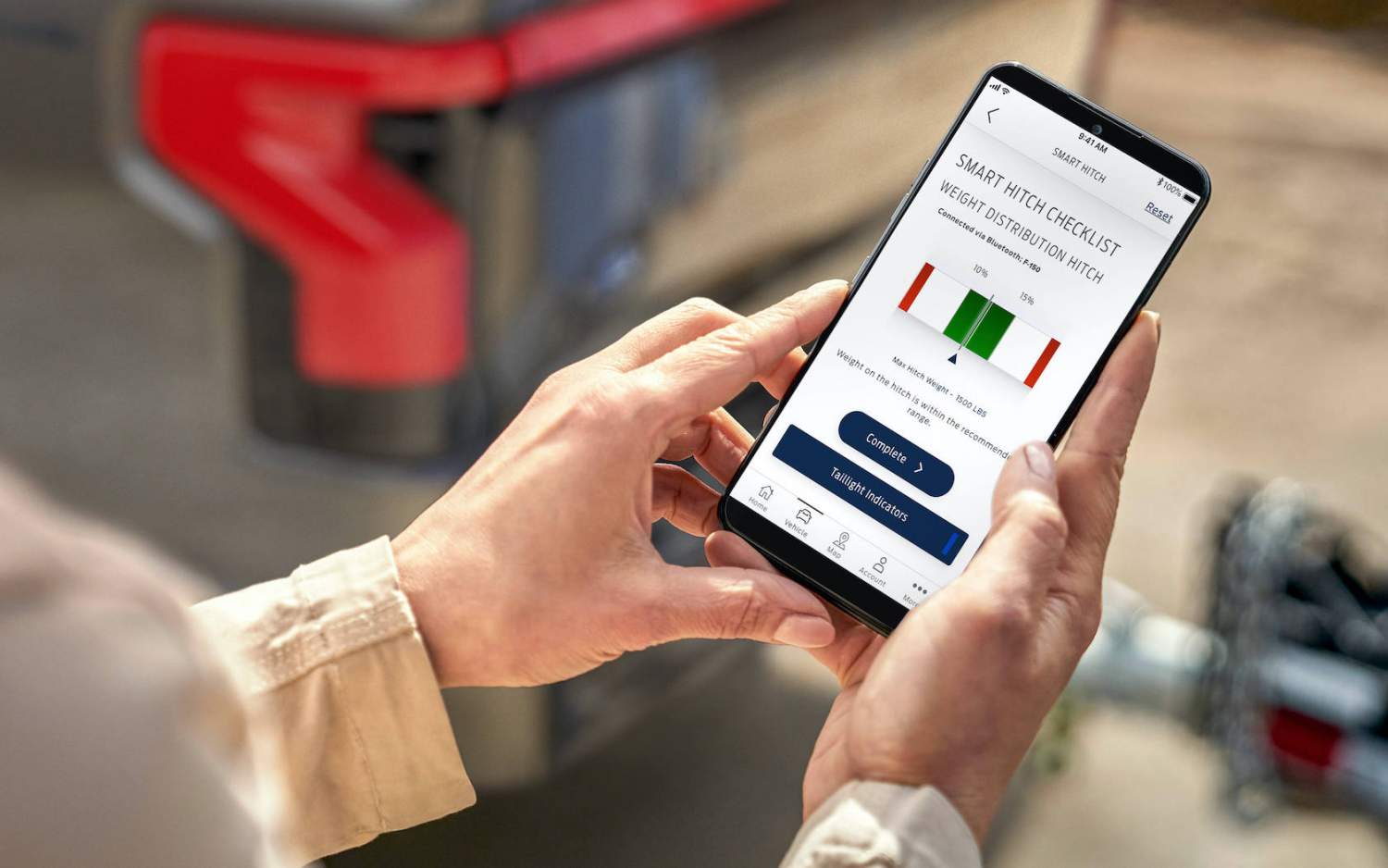 If you have the Tow Technology Package, with the integrated scales system, not only can you see how much you’re loading into the F-150 Lightning via the dashboard display, smartphone app, and rear light cluster LEDs, but the range estimate will add that into consideration as well. Over time, Ford plans to add more factors to that math, to make the range meter even more reassuring.

A “frunk” bigger than some cars’ trunks

Ford calls it the “Mega Power Frunk” and, though, we’d normally dismiss that as marketing hyperbole, what’s underneath the F-150 Lightning’s hood probably does deserve the name. A full 14.1 cubic feet (400 liters), with a 400 pound payload rating, the massive cavity is revealed by a power opening/closing lid triggered from the cab, the app, or a remote button. 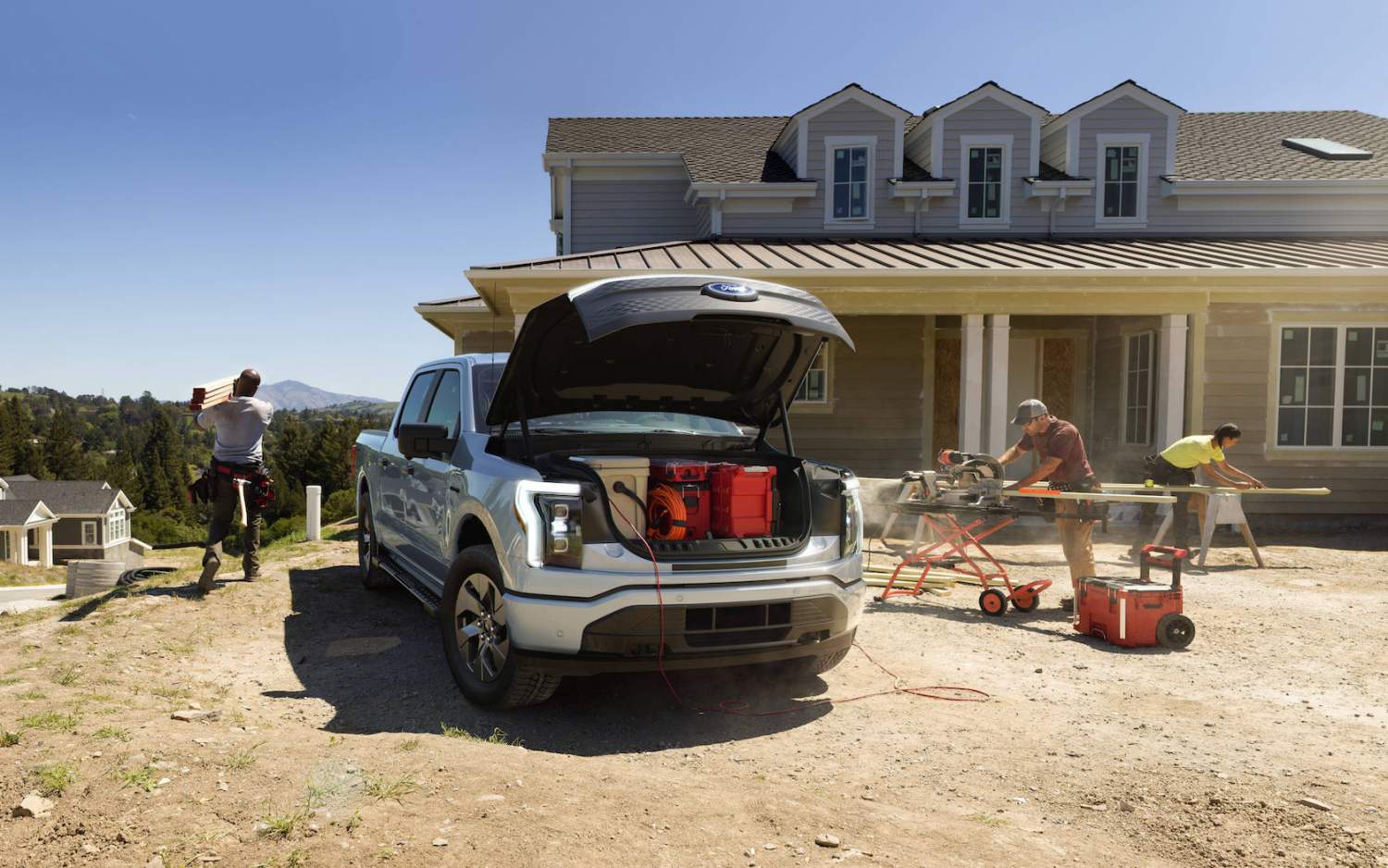 Inside, it’s designed to be more practical than the main trunk of some vehicles. Built-in D-rings and cargo hooks on both sides, for example, plus an underfloor bin with a drain hole and multi-position lid; you can remove that lid altogether, to carry taller items. The front lip, meanwhile, is intentionally low to make loading and unloading easier, and you can fit two full-size golf bags in there. 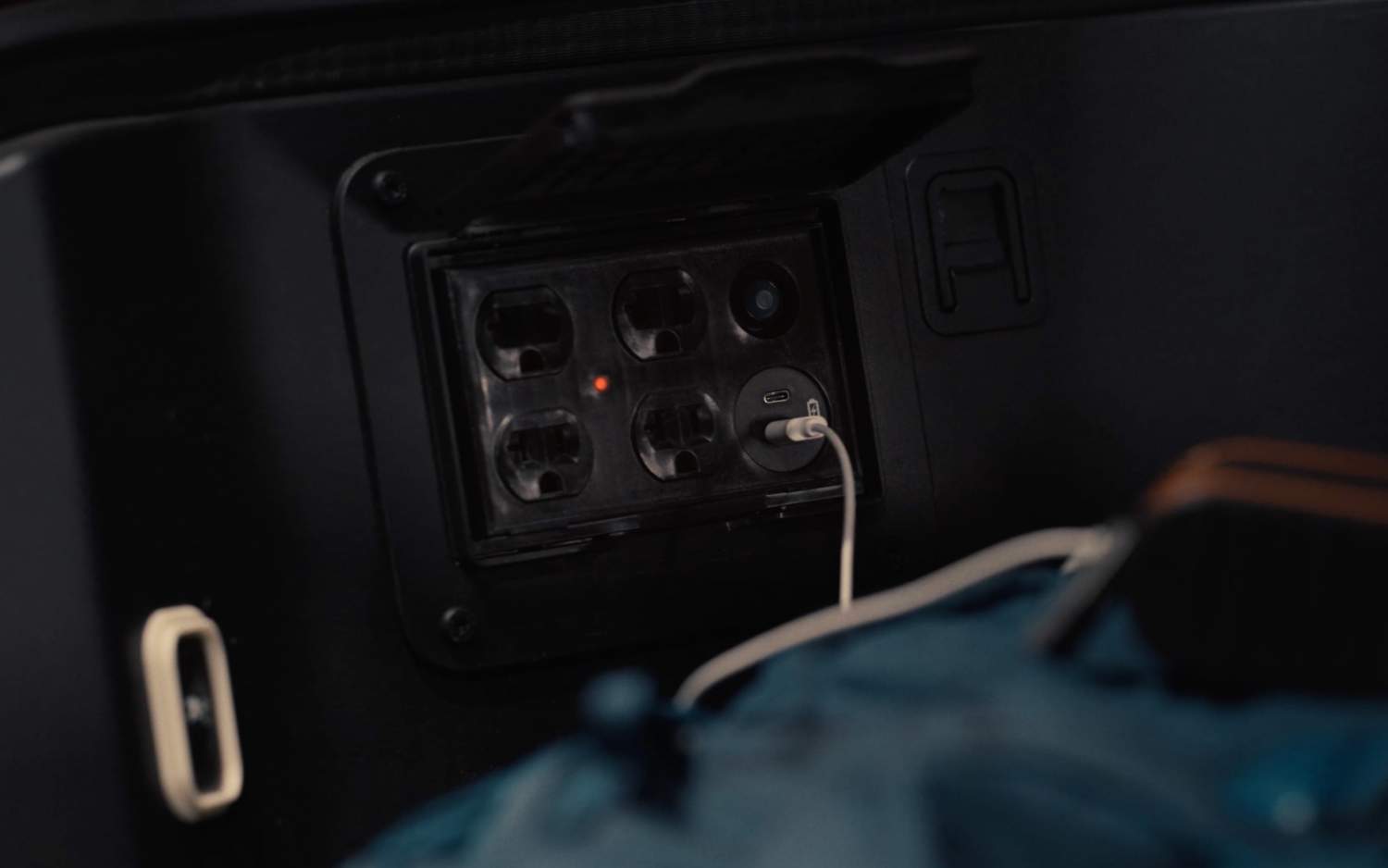 Also inside are four outlets and two USB chargers, with a total of 2.4 kW to play with. Enough, Ford points out, to not only make the frunk an impromptu office with your laptop and other devices, but also to run things like fridges and a TV for whatever the front equivalent of tailgating is called. 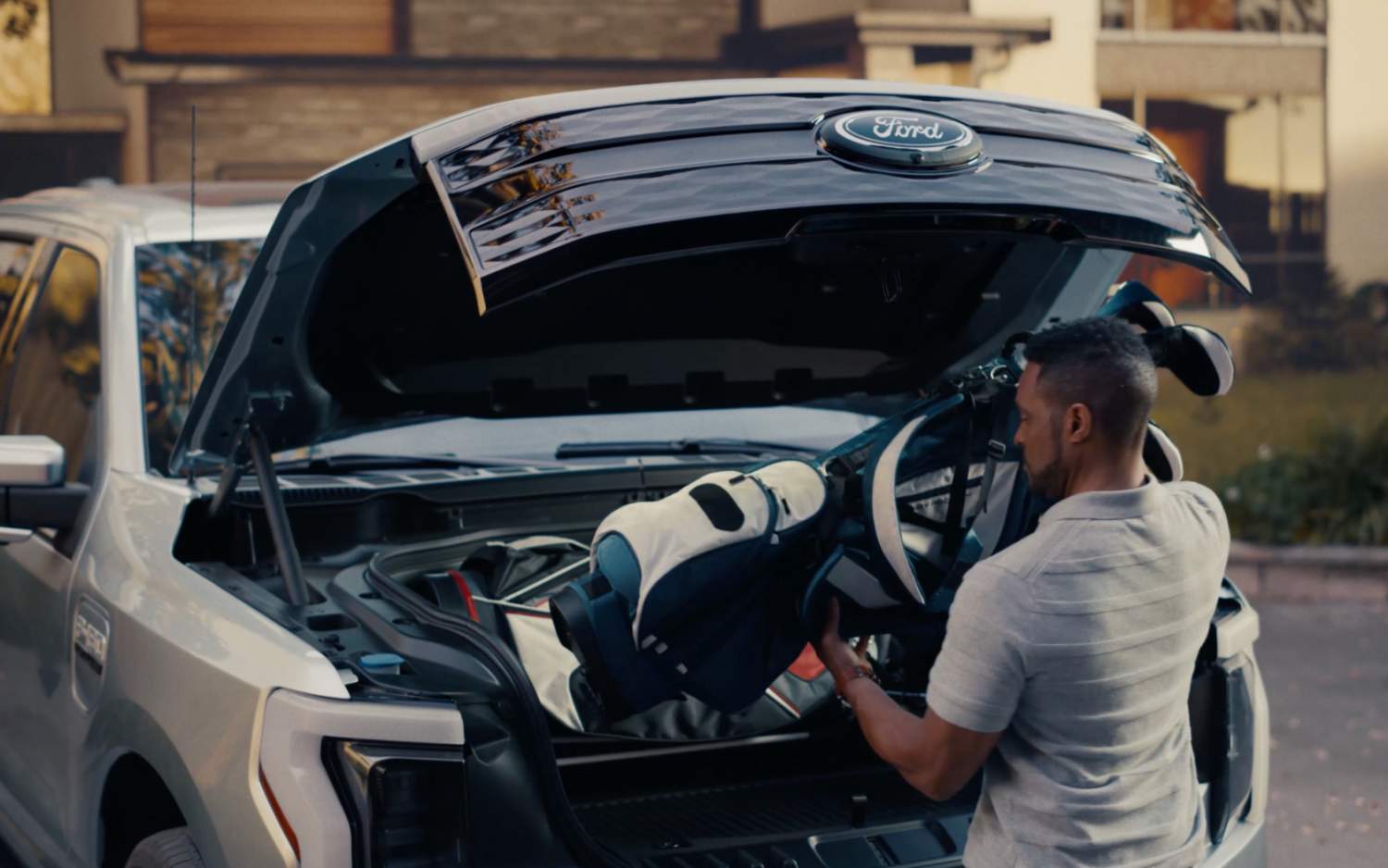 At the rear, meanwhile, a power up/down tailgate is standard on Lariat and Platinum trims, as is LED box lighting. Power-deployable running boards for the sides are optional on those models too, to replace the fixed, extended boards with lighting that are standard on XLT, Lariat, and Platinum.

In the cabin, the dashboard is dominated by a choice of two touchscreens. XLT trim gets a 12-inch landscape-orientation display, while Lariat and Platinum upgrade to a 15.5-inch portrait display. Standard is a 12-inch driver display.

The XLT has Ford’s SYNC 4, while the Lariat and Platinum get SYNC 4A as on the Mustang Mach-E. All three have wireless Apple CarPlay and Android Auto, connected navigation, an embedded 4G LTE modem with WiFi hotspot, and a physical volume knob. 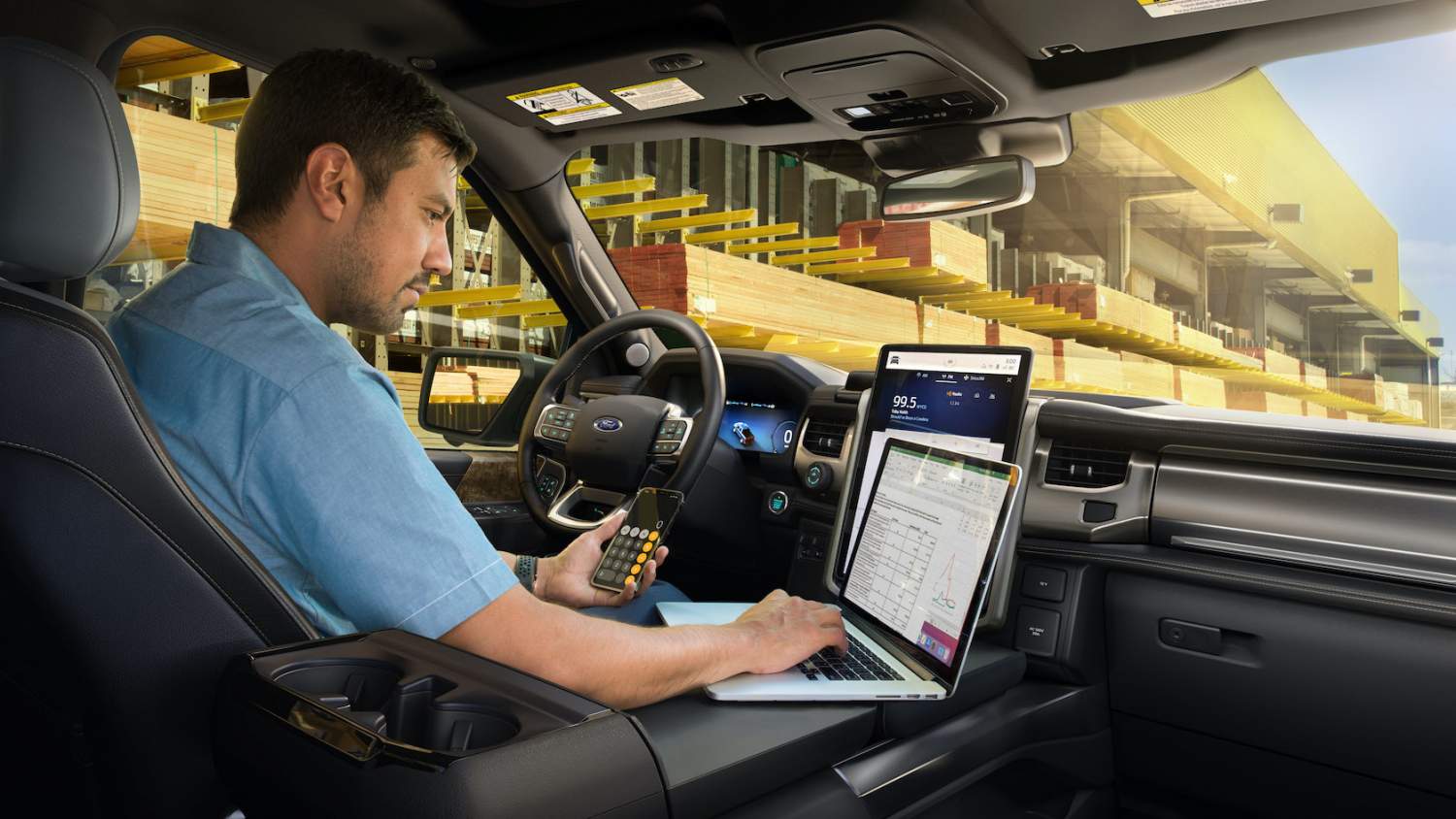 Like its gas sibling, the F-150 Lightning supports wireless, OTA updates, so that Ford can add new features and bug fixes over time. Smaller updates will happen in the background, while larger versions will prompt you to schedule them for overnight. There are also driver profiles, which automatically load as you approach the vehicle – including using Phone As A Key, standard on the Platinum and optional on Lariat – and will learn your preferences and common routes over time.

Standard tech includes LED projector headlamps with dynamic bending, a 360-degree camera, and a fold-out interior work surface. Options are leather seats with ventilation, the Maximum Recline Seats that fold down almost flat, and Bang & Olufsen audio systems with up to 18 speakers and a subwoofer. 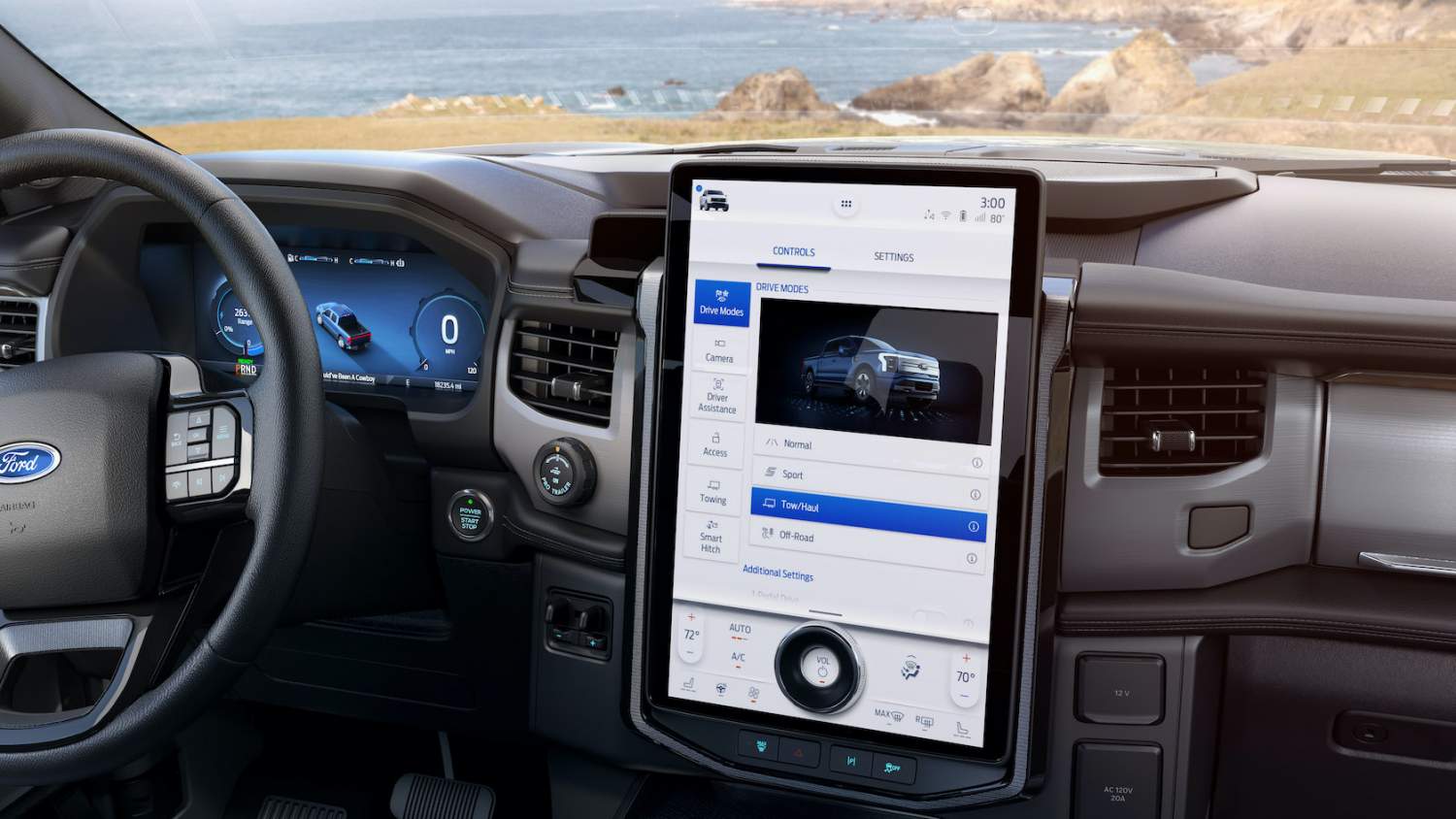 Ford Co-Pilot 360 2.0 is standard across the board, with pre-collision assistance with automatic emergency braking, blind-spot warnings with cross traffic alerts, and lane-keeping assistance. Lariat and Platinum get Ford CoPilot Assist 2.0 too, with adaptive cruise control, lane centering, and evasive steering assist; it’s optional on the XLT trim.

Finally, Ford Co-Pilot360 Active 2.0 with BlueCruise hands-free highway driver assistance is an option on the Lariat, and standard on the Platinum. That uses a driver attention monitoring camera to allow you to take your hands off the wheel on select, pre-mapped highways in the US and Canada.

Power at home, power on the road

While Ford obviously expects F-150 Lightning owners to do plenty of driving, there are other ways to use that battery power. XLT trim gets 2.4 kW Pro Power Onboard as standard, with eight 120V outlets allowing you to run worksite or campsite equipment from the truck’s battery. 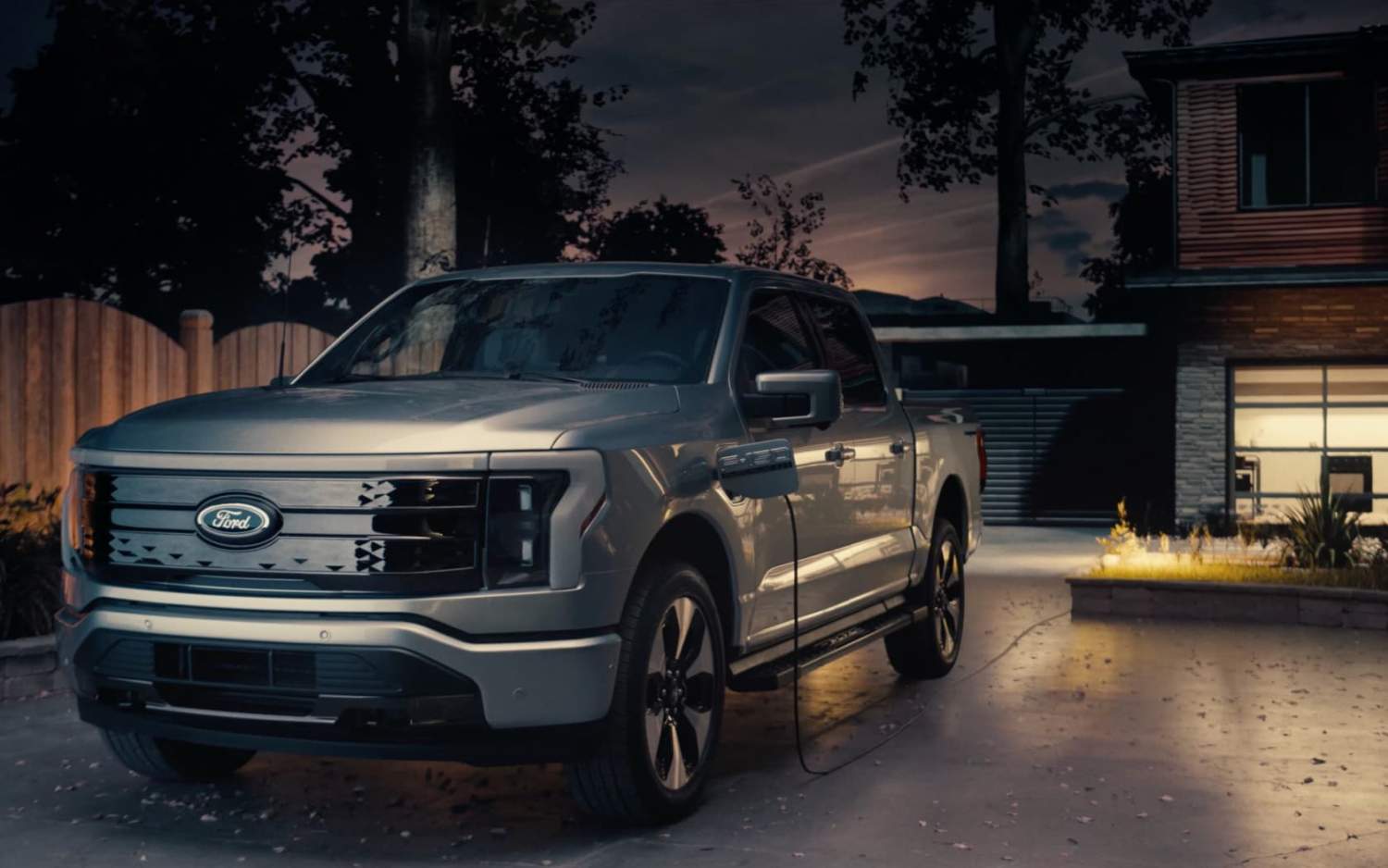 Potentially even more intriguing is Ford Intelligent Backup Power. That – with the new new 80A Ford Charge Station Pro – allows the F-150 Lightning to deliver power bidirectionally. Wired into your home electricity, in the case of an outage the electric truck can automatically start supplying battery power instead.

Ford says that it can run for up to three days on an average of 30 kWh use; ration yourself a little more, and it could be extended to up to 10 days. When the power comes back on, the F-150 Lightning will automatically switch back into charging mode.