Nobody could accuse Ford of not taking the 2022 Expedition seriously. The full-sized SUV isn’t just the flagship of the company’s range, but a bonafide hit among some of the auto industry’s most coveted demographics, particularly family-minded millennials discovering they simply must have three rows and plenty of cargo space.

It’s a collective realization that has helped propel Ford to record Expedition sales since it redesigned the SUV back in 2017. Now, with no shortage of competition on forecourts, it’s revamping the Expedition again. 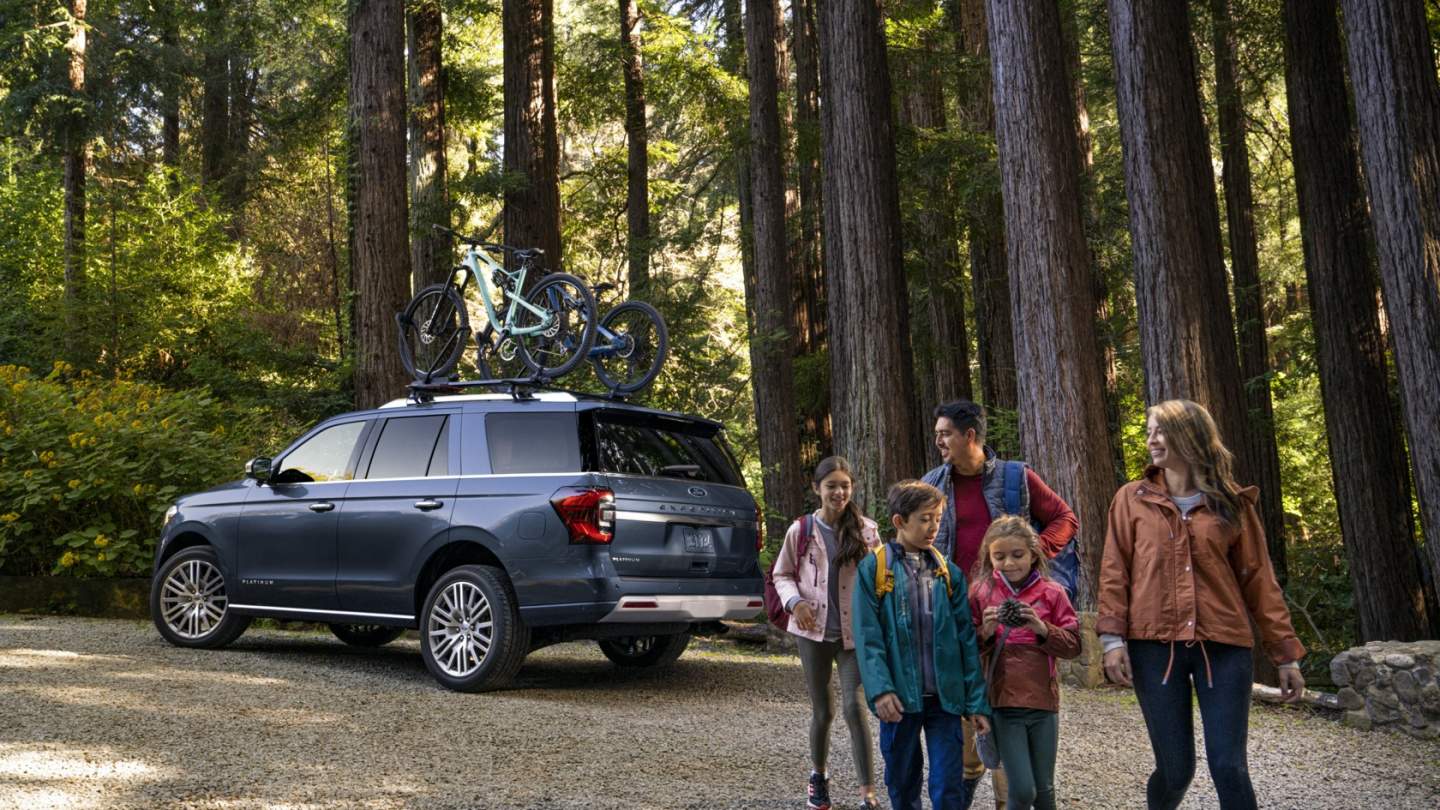 Key to the strategy is a pair of new trims, with the 2022 Expedition Timberline Series and the 2022 Expedition Stealth Edition Performance Package joining the line-up. Borrowing features from the Expedition XL through to the luxury Platinum, the two have Jeep’s Wagoneer and Chevrolet’s Tahoe RST in their sights. Meanwhile, there’s fresh cabin tech across the board.

Ford launched the Timberline nameplate on the 2021 Explorer, combining off-road upgrades with bolder styling. That same recipe has even carried over to the Expedition Timberline, billed by the blue oval as “the most off-road capable Expedition ever.” As you’d hope, it’s more than just a styling package. 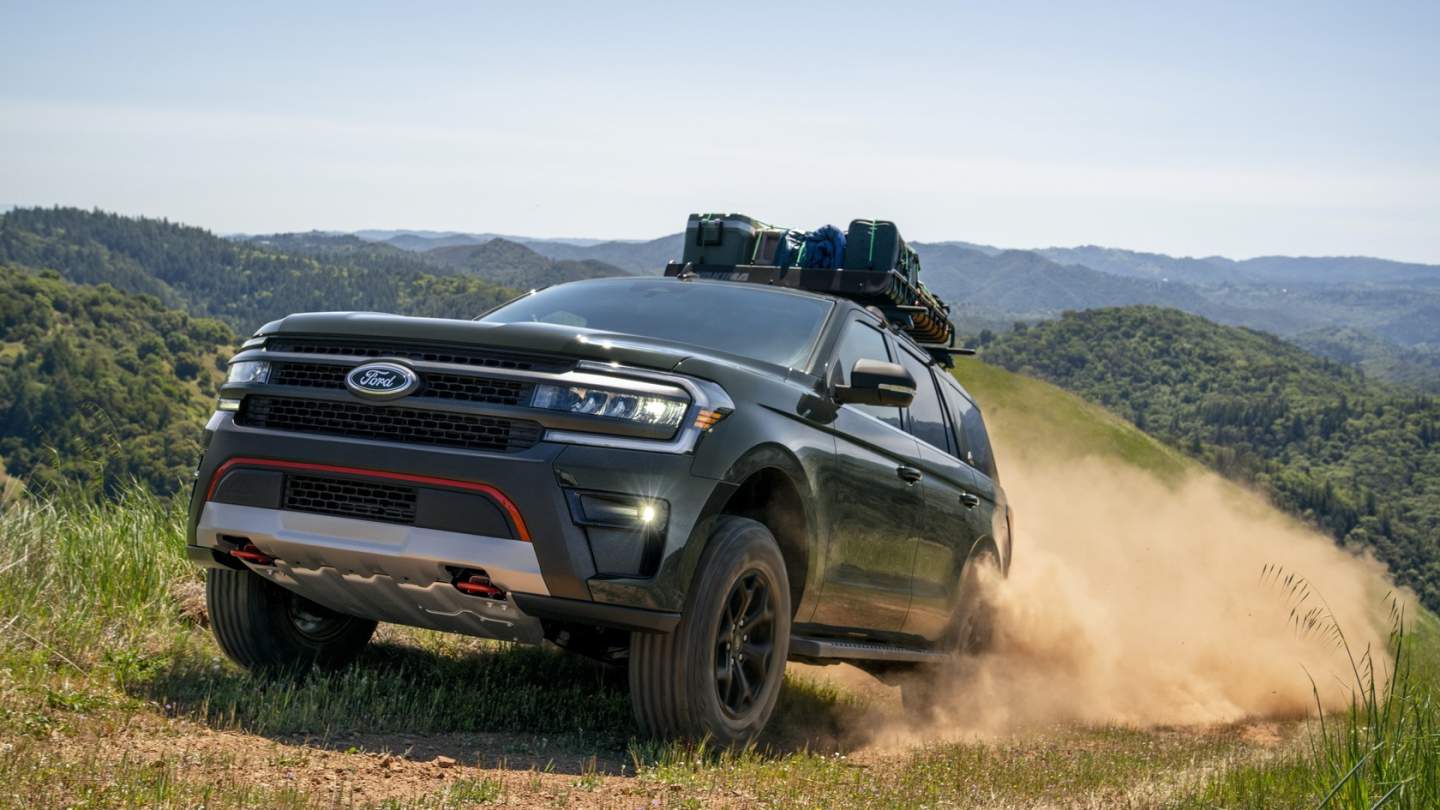 The Timberline has up to 10.6-inches of ground clearance, and packs a performance-tuned version of the 3.5-liter EcoBoost engine. That’s good for 440 horsepower and 510 lb-ft of torque. There’s a 10-speed automatic transmission, 2-speed transfer case, and limited slip rear differential as standard, too.

Ford has added seven drive modes, including off-road specific settings, and there’s Trail Turn Assist to cut down the turning radius. That should prove useful both while in the wilderness and in tight parking lots. The F-150 Raptor donates its steel skid plates for the Timberline’s underbody protection, to which Ford adds unique front and rear fascias. 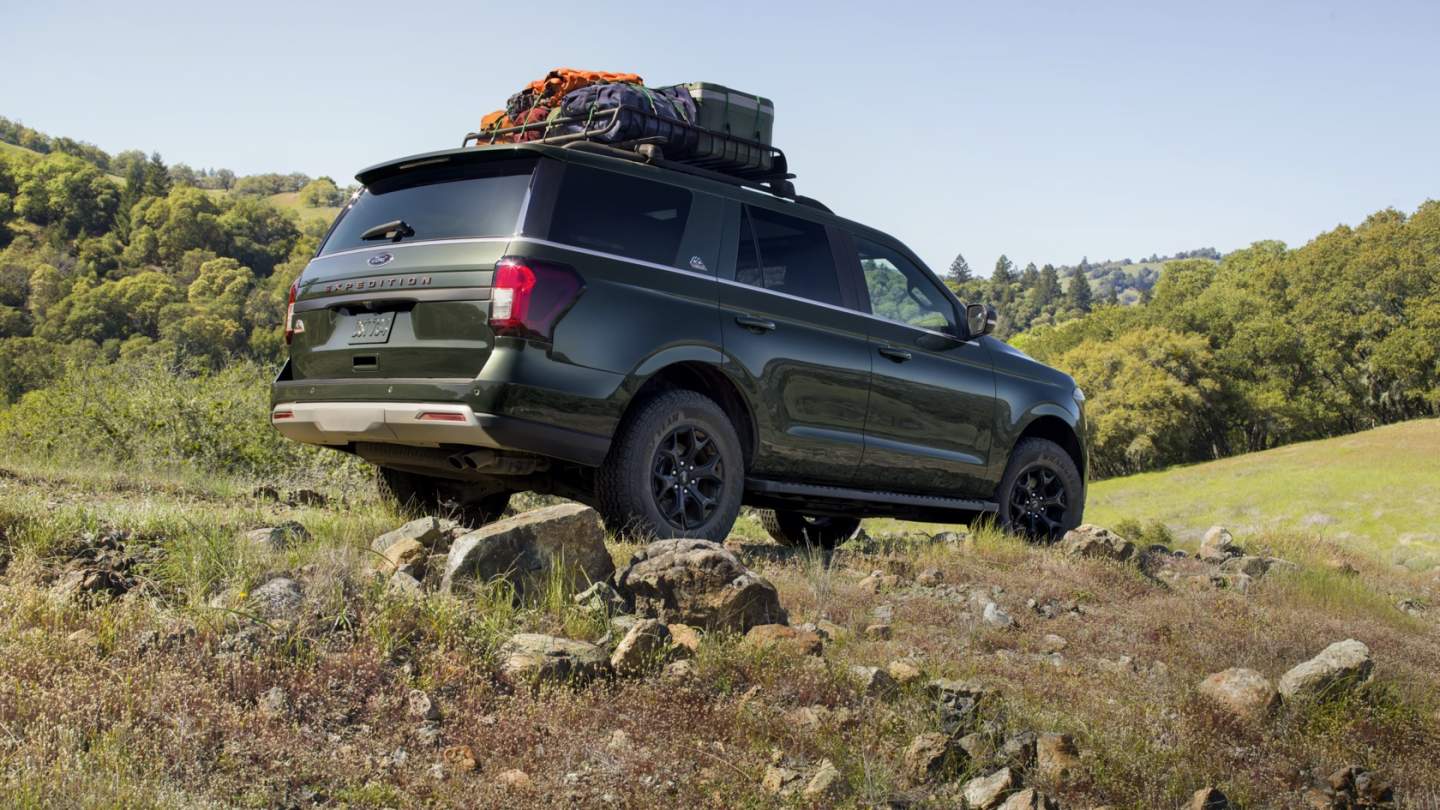 They don’t just look the part: they also help improve the approach angle to 28.5-degrees and the departure angle to 23.7-degrees. Special 18-inch wheels get laser-etched Timberline logos and a wider track, plus 33-inch Goodyear Wrangler AT tires. Finally, there’s a dark carbonized grille, LED lighting, and red amber accents.

More at home on the road, the Expedition Stealth Edition Performance Package focuses on bringing out the SUV’s capabilities while you’re still on the asphalt. Available on the Expedition Limited and Limited MAX trims, it has the same performance-tuned engine as the Timberline, but adds 22-oinch gloss black wheels and sport-tuned suspension. 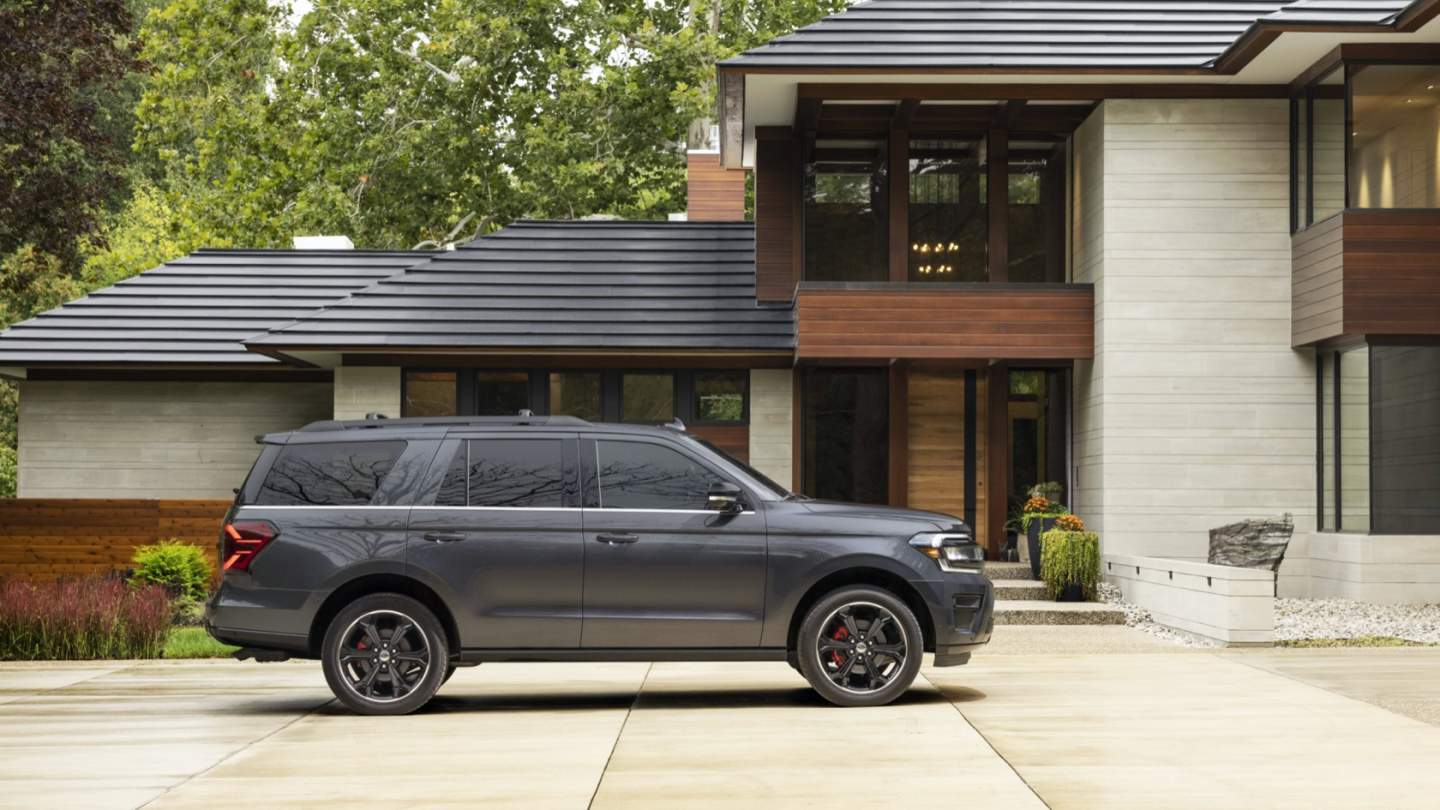 There’s also CCD Active Shock Damping, which uses a front-facing camera to track the conditions of the road up to 50 feet ahead of the SUV. That way, it can proactively adjust the suspension to deal with bumps, potholes, and ruts. 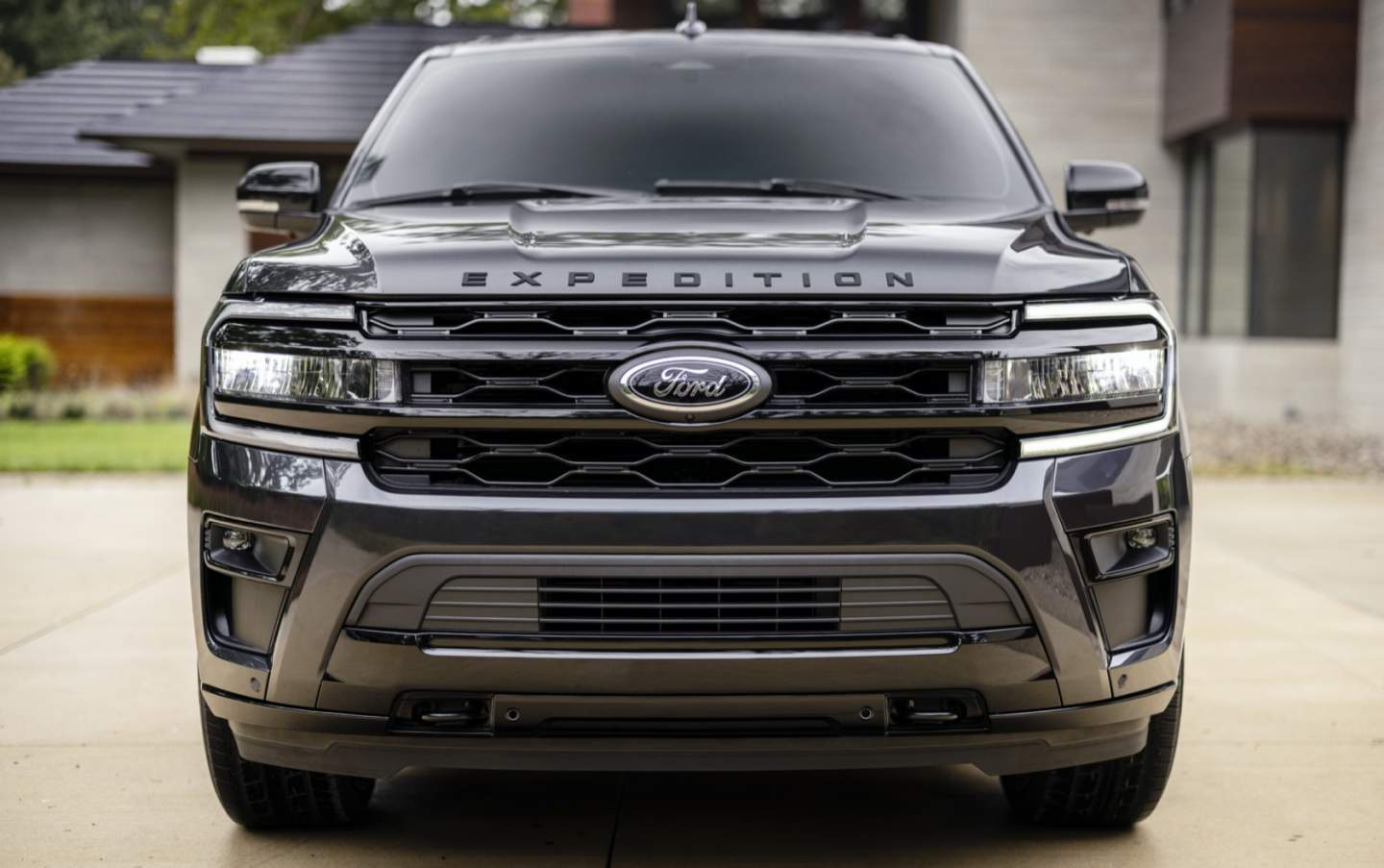 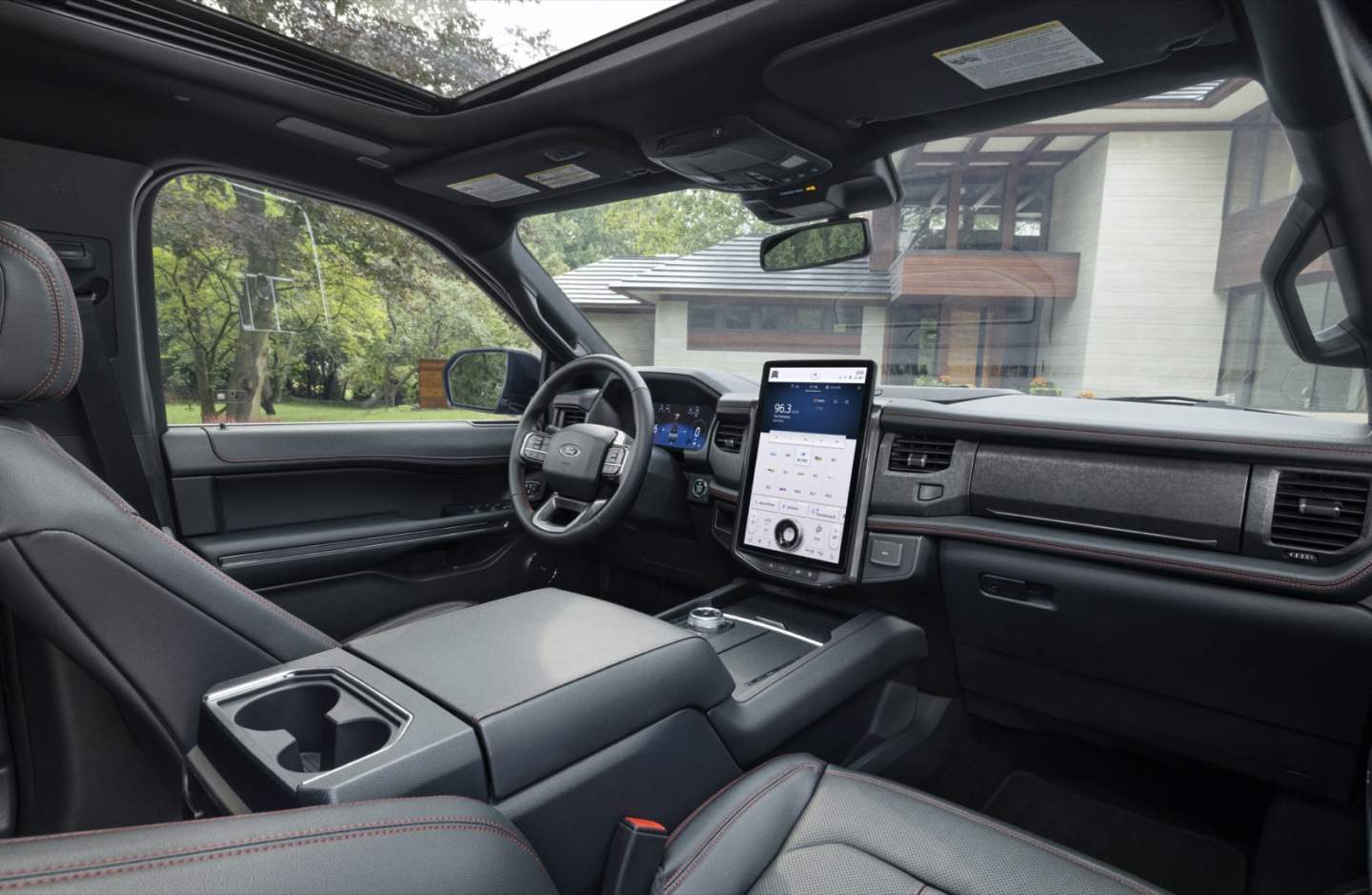 For the 2022 Expedition, a tech upgrade

Cabin features in general have been improved across the board for the new Expedition. SYNC 4 is standard, with twice the processing power of before, and SYNC 4A an option. A 12-inch landscape-orientation touchscreen is standard, complete with physical controls underneath, while a 15.5-inch version is optional, as is a 12-inch fully-digital instrumentation display. 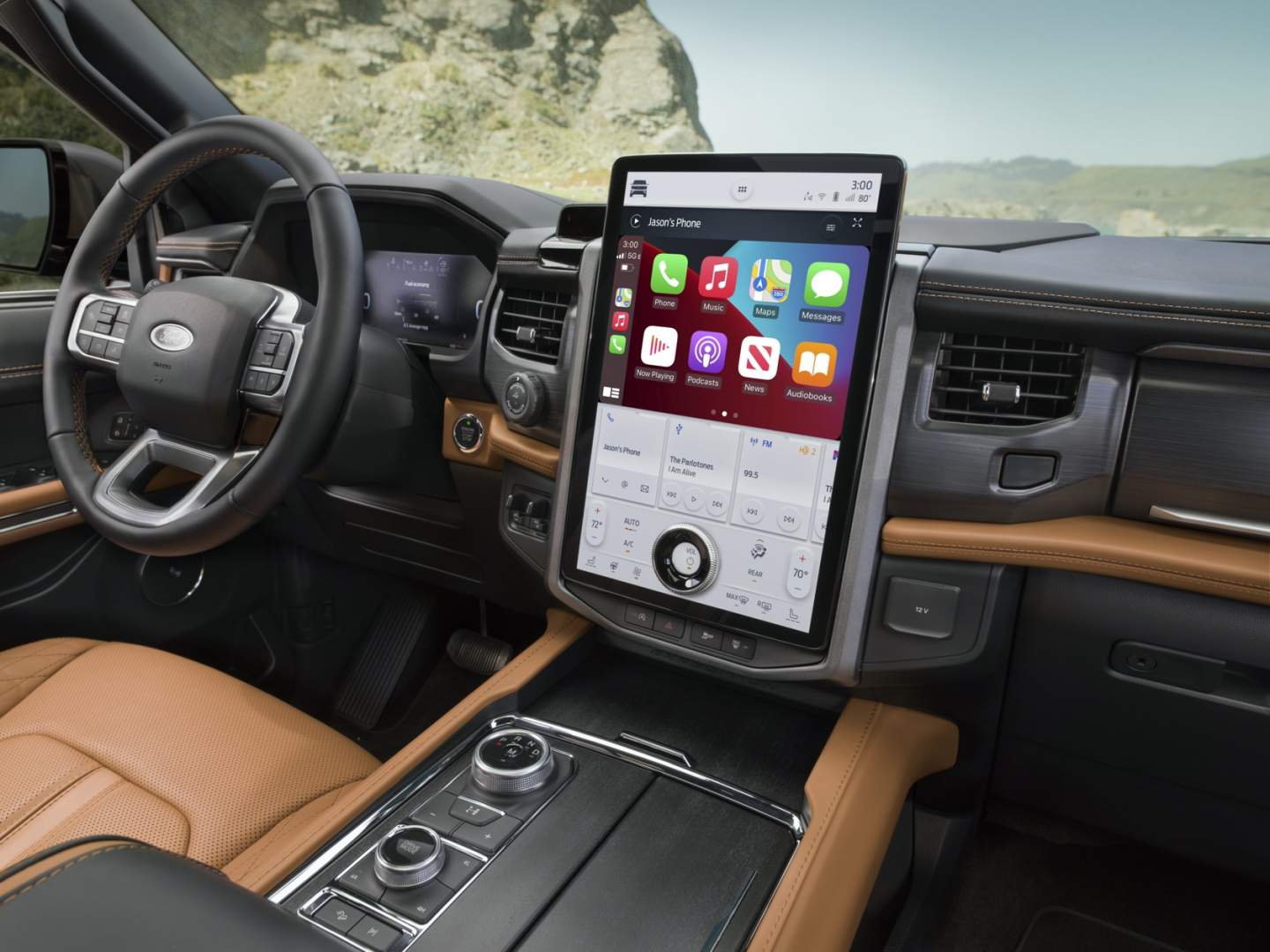 Ford BlueCruise – the company’s hands-free driver assistance system, which can deal with lane-keeping and speed on pre-mapped divided highways in the US and Canada – is offered on the 2022 Expedition Platinum. It relies on a driver-facing camera to make sure whoever is behind the wheel is still paying attention, even if their hands aren’t needed on the wheel itself.

Ford Co-Pilot360 is standard, with automatic emergency braking, intersection alert, and evasive steering assistance. There’s also an optional 360-degree camera view, which offers a closer view of the four corners of the vehicle. Object-detection can flag a potential hazard on the screen. 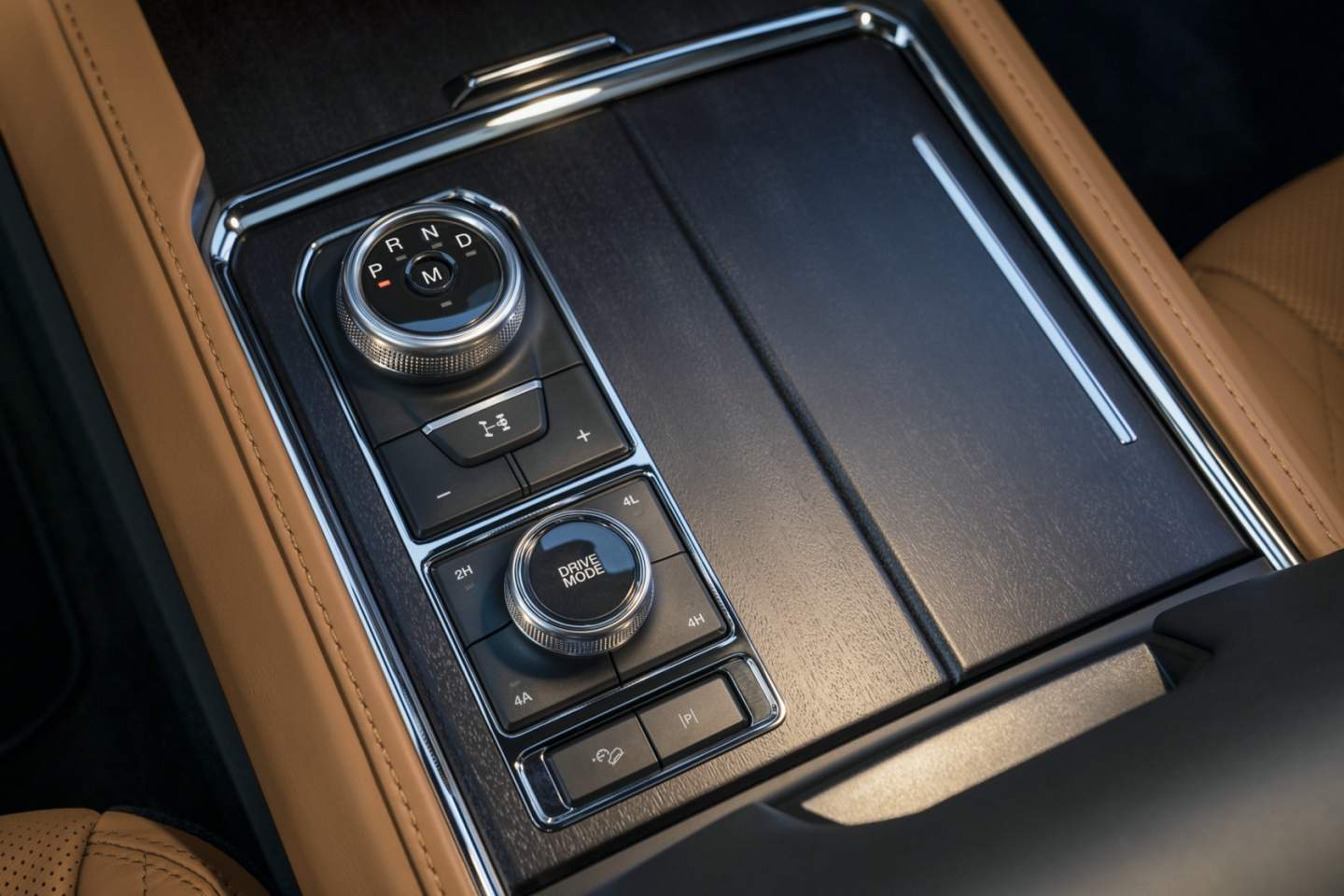 Other options include a Bang & Olufsen audio system with 22-speakers, and a rear seat entertainment system with Amazon Fire TV integrated into twin touchscreen displays. Pro-Trailer Backup Assist 2.0 can now automatically figure out the dimensions of a trailer without needing target a sticker or for them to be manually inputted. It allows the movement of the trailer to be controlled with a knob on the dashboard. 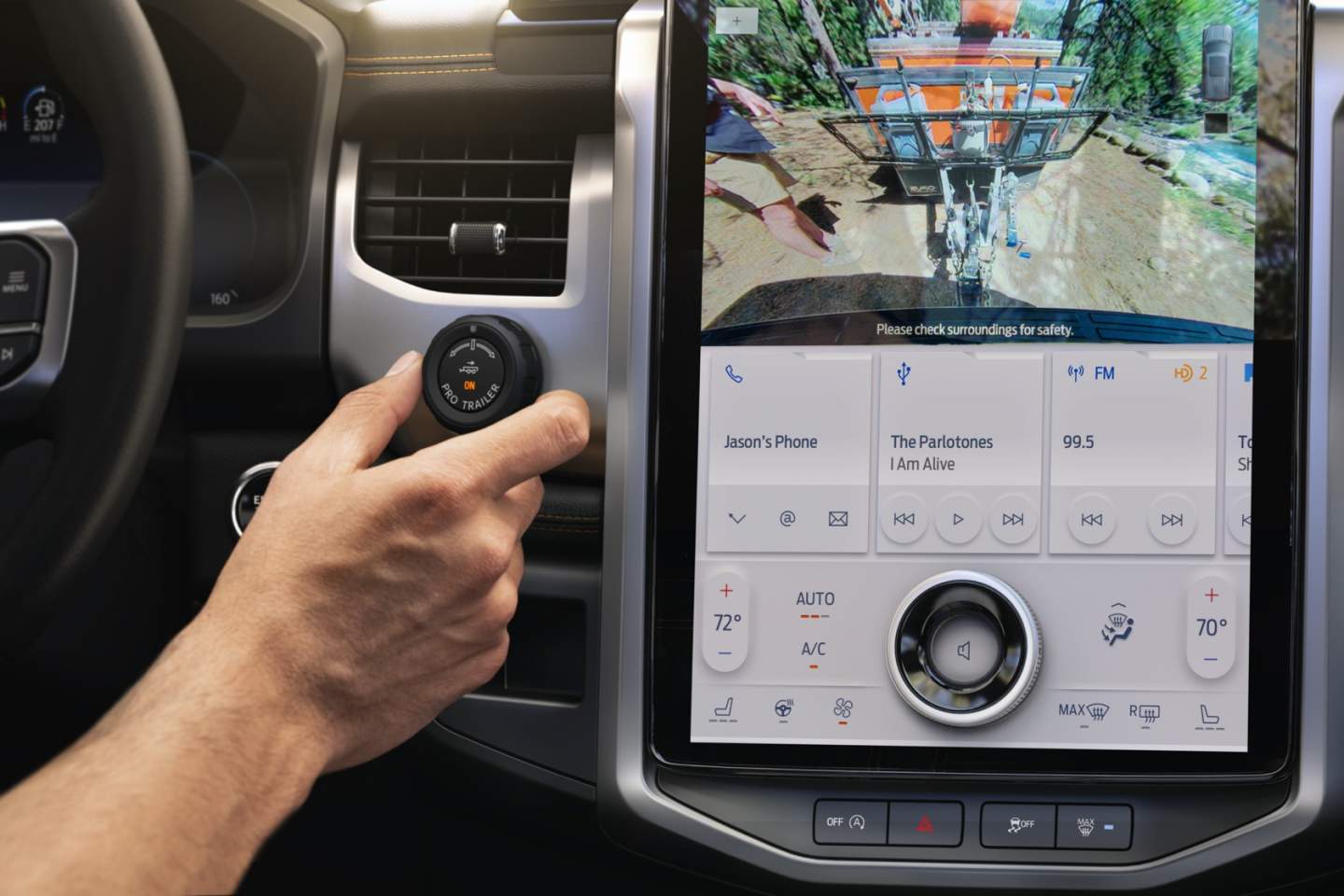 Seating for 5-8 will be offered, trim-depending, while the regular engine is a 3.5-liter EcoBoost tuned for 380 horsepower and 470 lb-ft. If there’s a disappointment, it’s that there’s still no electrified option, not even a mild-hybrid. According to Ford, the turbo-V6 is still the right pick for the segment, though it still seems a shame that some of the ambition of the F-150 Lightning EV hasn’t been carried over to this full-size SUV. 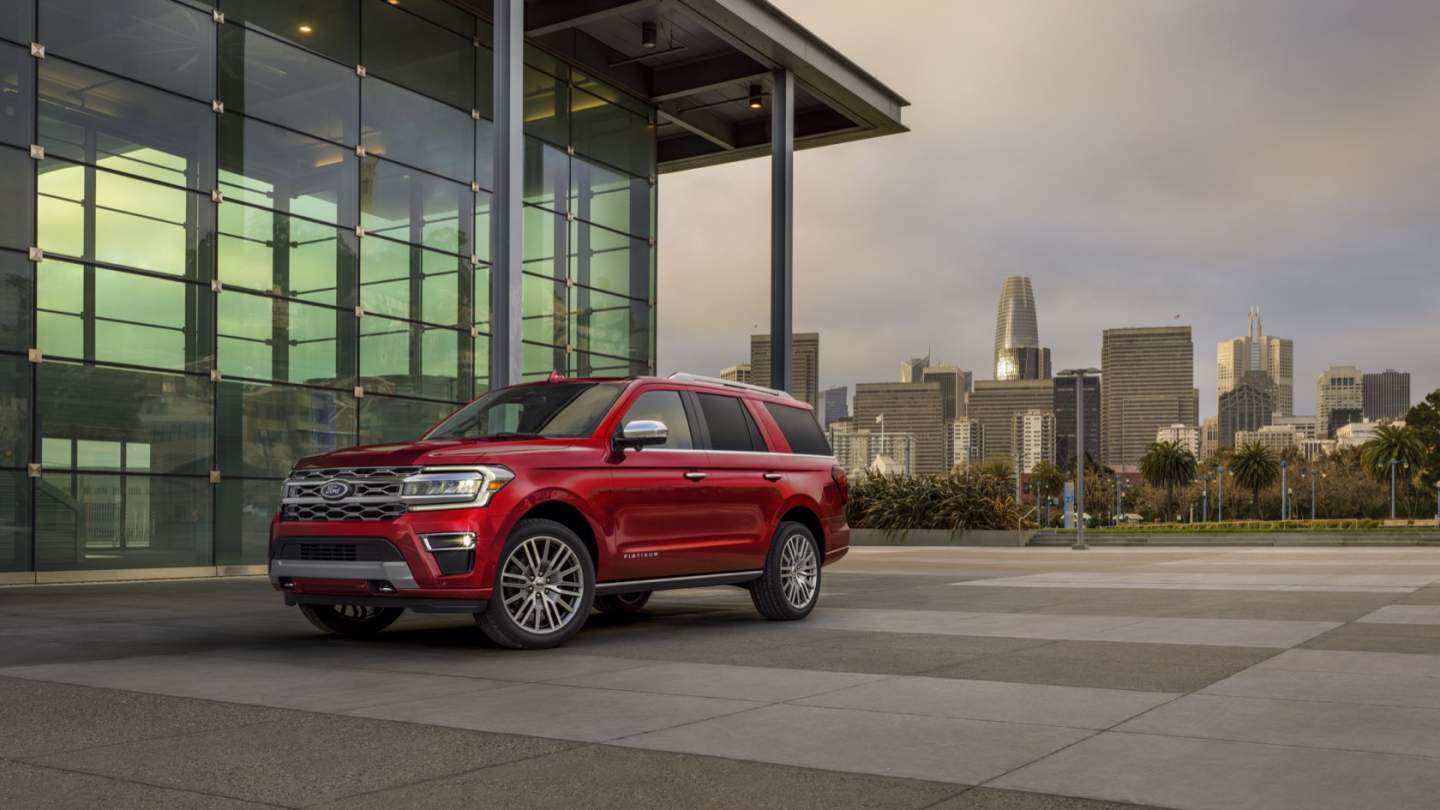 As for towing, there’s up to 9,300 pounds of capacity with the heavy duty trailer package. 20-percent of Expedition owners tow regularly, Ford claims. The CCD suspension will be standard on Platinum trim, and optional on Limited and above.

Ford says to expect the 2022 Expedition in dealerships come Q1 2022. Pricing will be confirmed closer to that point.