Ford has launched a new series for its SUVs, with the 2021 Explorer Timberline promising more off-road ability, even if it also looks kinda like a cop car. Described by the automaker as its “most off-road-capable Explorer ever,” the special trim boosts ground clearance and improves both the approach and departure angles.

Compared to a regular Explorer, the Timberline version is 0.8-inches higher. Ford says that’s down to new heavy-duty shocks along with the Bridgestone Dueler P265/65R-18 all-terrain tires that have a higher sidewall than the SUV’s usual rubber. 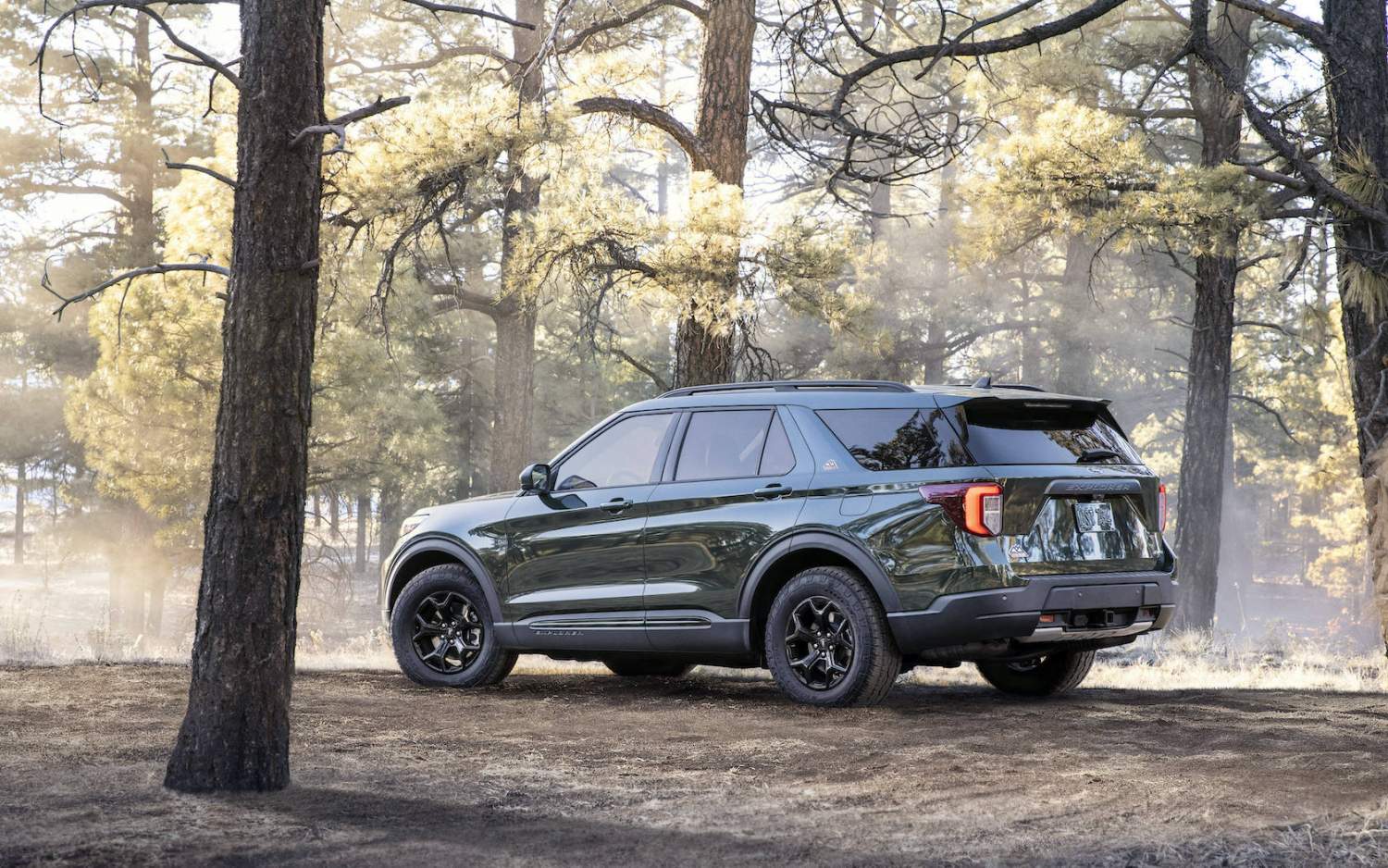 That’s combined with new front and rear fascias, helping nudge the Explorer Timberline’s approach angle to 23.5 degrees, and its maximum departure angle to 23.7 degrees. Minimum ground clearance is now 8.7 inches, while the special tires have a different tread pattern for more off-road grip.

The all-wheel drive system is, unsurprisingly, standard on the Timberline, with Ford also throwing in a Torsen limited-slip rear differential too. That can nudge torque between the left and right wheels on the back axle, depending on which has the most grip. It works with the standard Terrain Management System which offers modes like Deep Snow/Sand and Trail, along with Hill Descent Control. 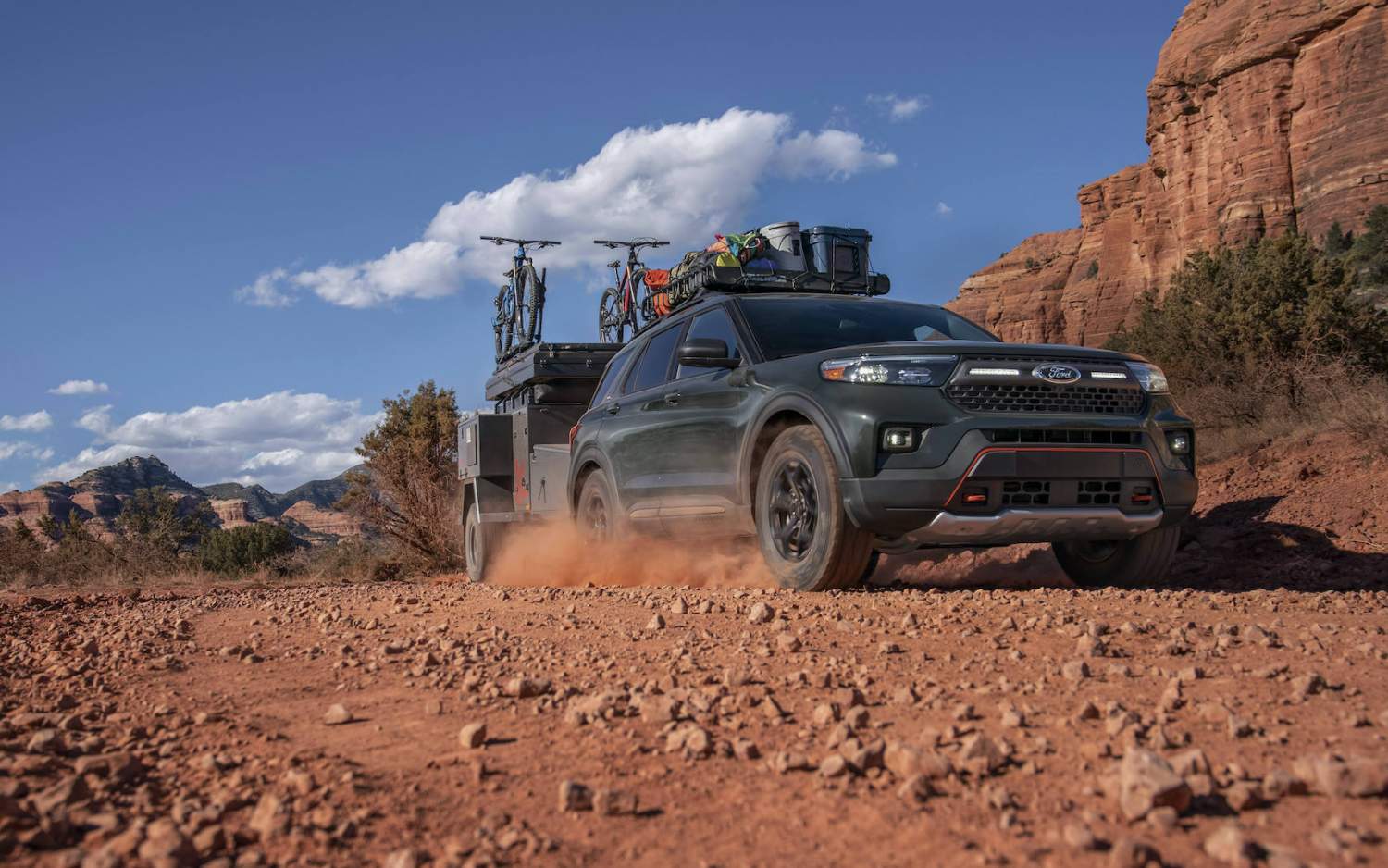 Just in case things do get sketchy out in the wilderness, there are standard steel skid plates, with extended underbody protection to better protect the engine and transmission among other sections. Ford then throws in special calibration for the steering, along with tuning for the stabilizer bars and springs, and there’s a new front rebound spring that the automaker says should cut sudden jarring in off-road situations.

The 2.3-liter EcoBoost engine is standard, paired with a 10-speed automatic transmission. That delivers 300 horsepower and 310 lb-ft of torque. Standard, too, is the Class III Trailer Tow Package, with which the 2021 Explorer Timberline is rated for 5,300 pounds of towing. 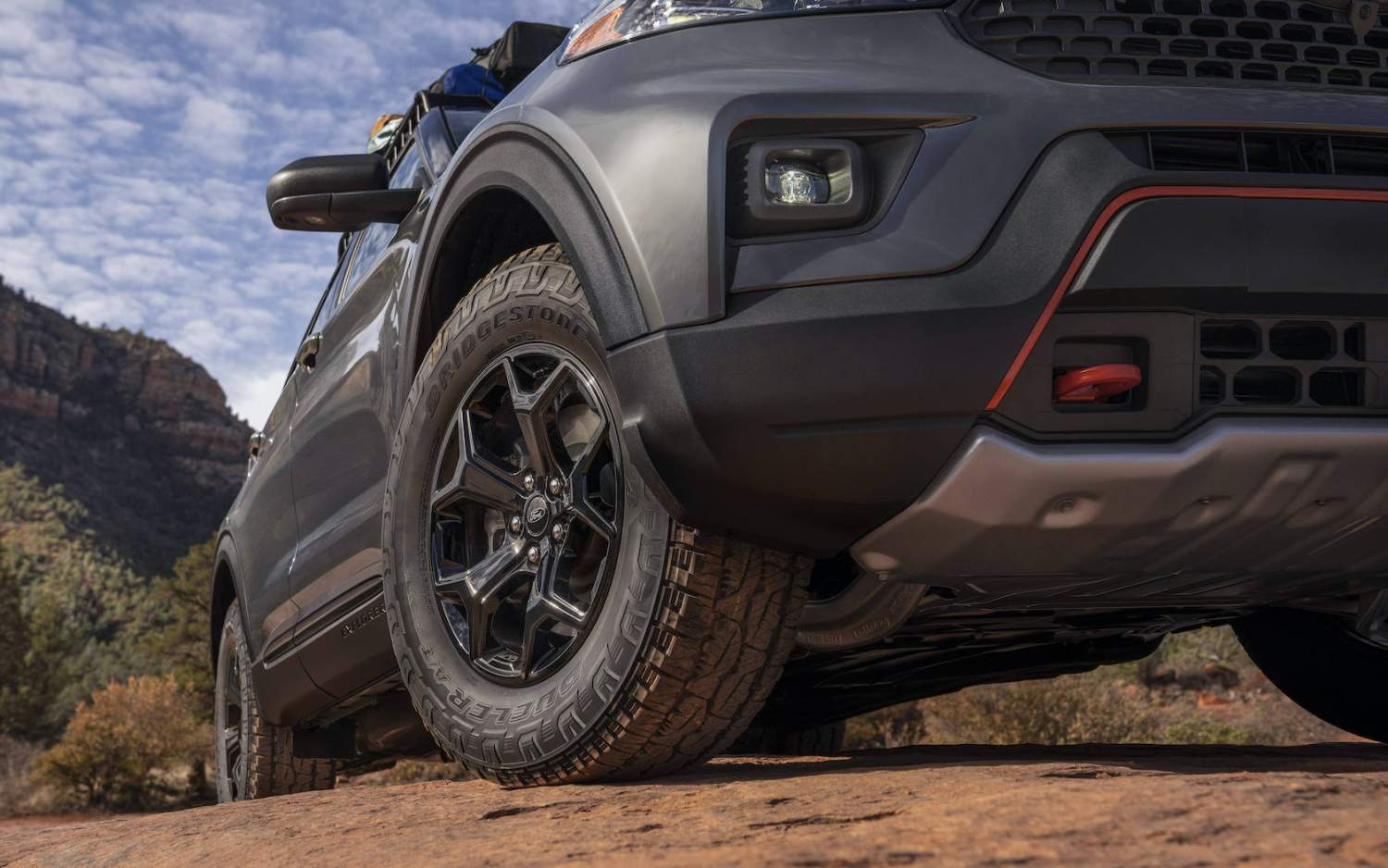 It’s the design where things get a little weird. The Forged Green Metallic paint – new for the Explorer Timberline – is handsome, but the dark finish combined with the blackout treatment around the headlamps and taillamps, the black Ford oval badging, and the prewiring for LED Ford Performance auxiliary lights in the grille definitely give the SUV a cop-style aesthetic. 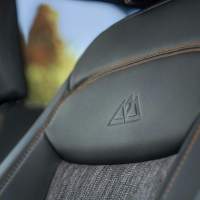 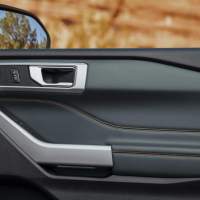 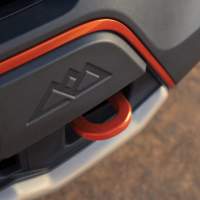 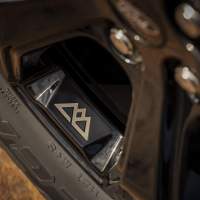 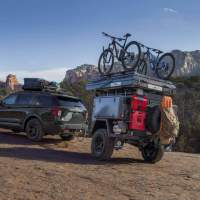 There are some giveaways that this isn’t a highway patrol vehicle, mind. The high-gloss painted aluminum wheels – with a laser-etched Timberline logo – are one, and the Red Ember tow hooks (rated for 150-percent of gross vehicle weight) are another. Inside this is no stripped-out cop SUV either, with Deep Cypress and Ebony trim, Deep Tangerine stitching, and more of those Timberline logos. 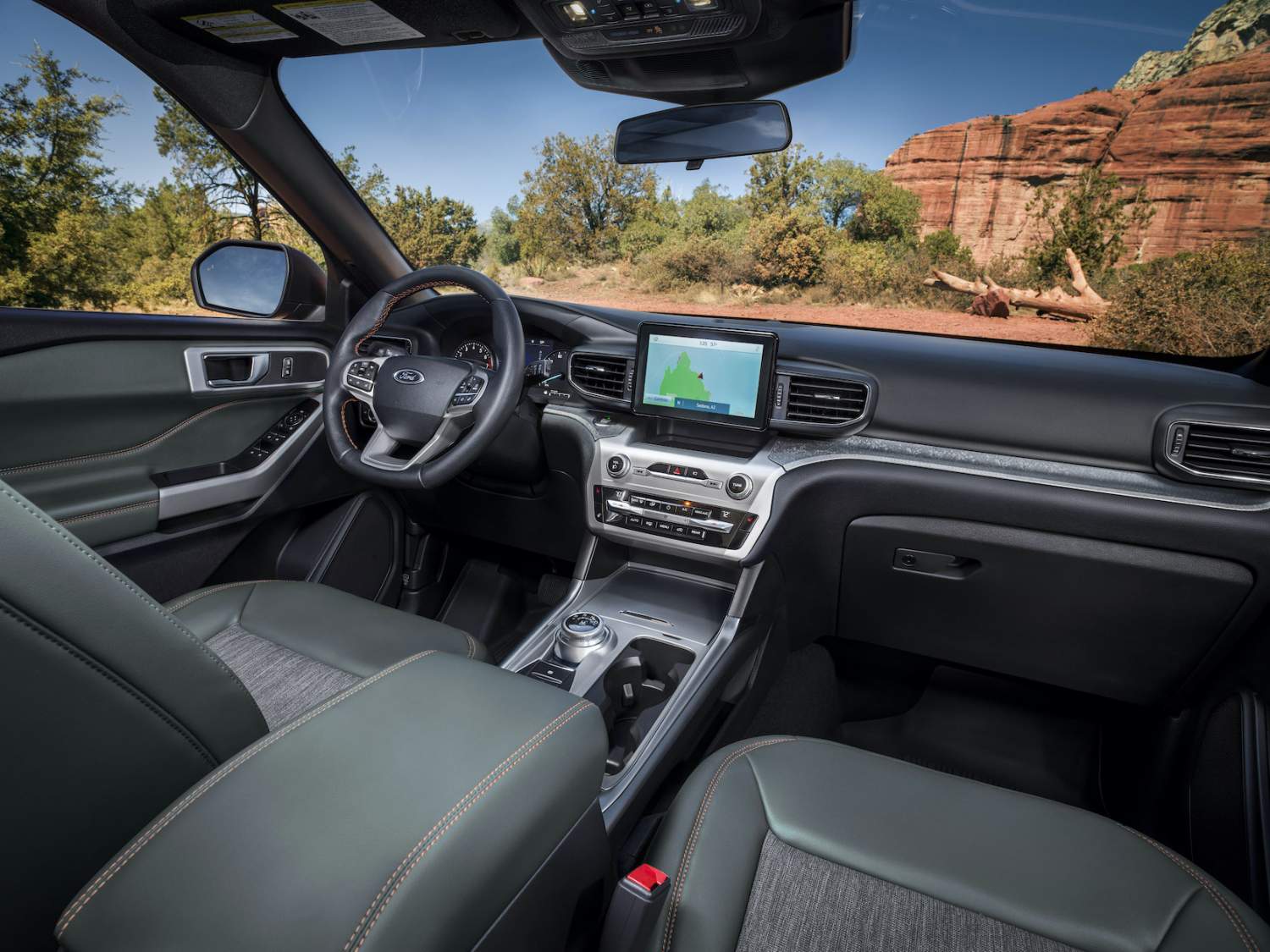 The seats are trimmed in ActiveX, promising to be easier to clean that way, while rubber floor liners are standard too for the same reason. Still, you get heating for the front seats, a heated, leather-wrapped steering wheel, and Co-Pilot360 and Co-Pilot360 Assist+ as standard too. A 360-degree camera is fitted as well, as is a down-facing front camera that gives a handy view when off-roading. 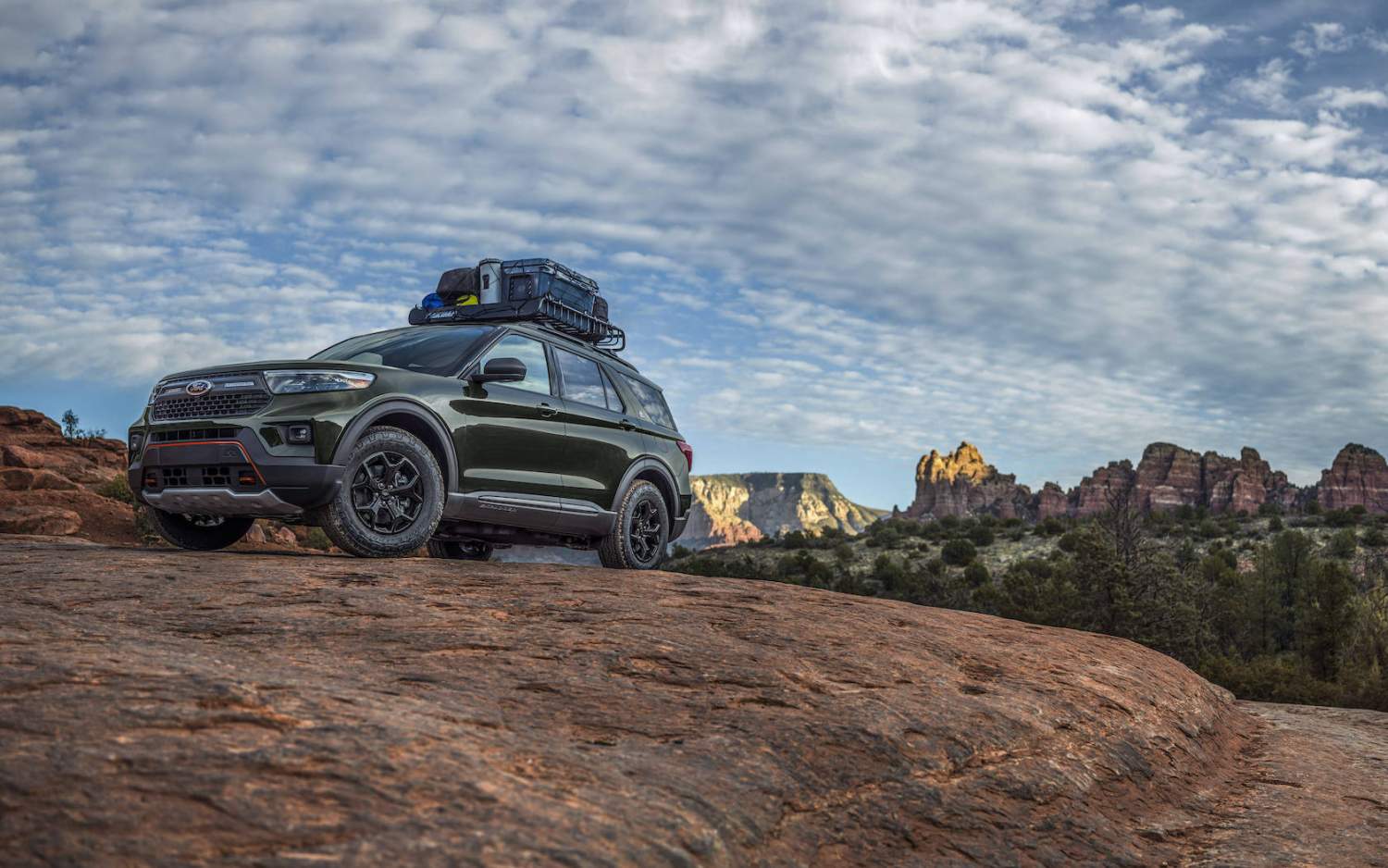 Ford will also have three Outfitters packages – Outfitters SkyBox, Outfitters MegaWarrior, and Outfitters FrontLoader – with various accessories for the 2021 Explorer Timberline, too. Expect the new SUV to arrive in dealerships this Summer, just in time to terrify other drivers as you appear in their rear-view mirrors.