2022 Chevrolet Bolt EUV and EV: The Highs and the Lows

Chevrolet’s Bolt EV has built a reputation for aggressive pricing and plenty of range, and now there’s not only a new version of the electric hatchback but a 2022 Bolt EUV crossover version too. Announced at the weekend, they’re a cunning combination of familiar tech with new, as Chevy strikes a balance between value and gadgetry.

On price per mile of range, it’s hard to argue with the Bolt

There are plenty of reasons to buy an electric car – environmental concern, availability of rebates and incentives, a hatred of filling up at gas stations, and the smooth and quiet drive of EV powertrains – but one of the most common is range. How far you can go on a single charge is the primary metric by which new EVs are judged, and that looks unlikely to change any time soon. Luckily, then, the Bolt EV value equation just got even stronger. 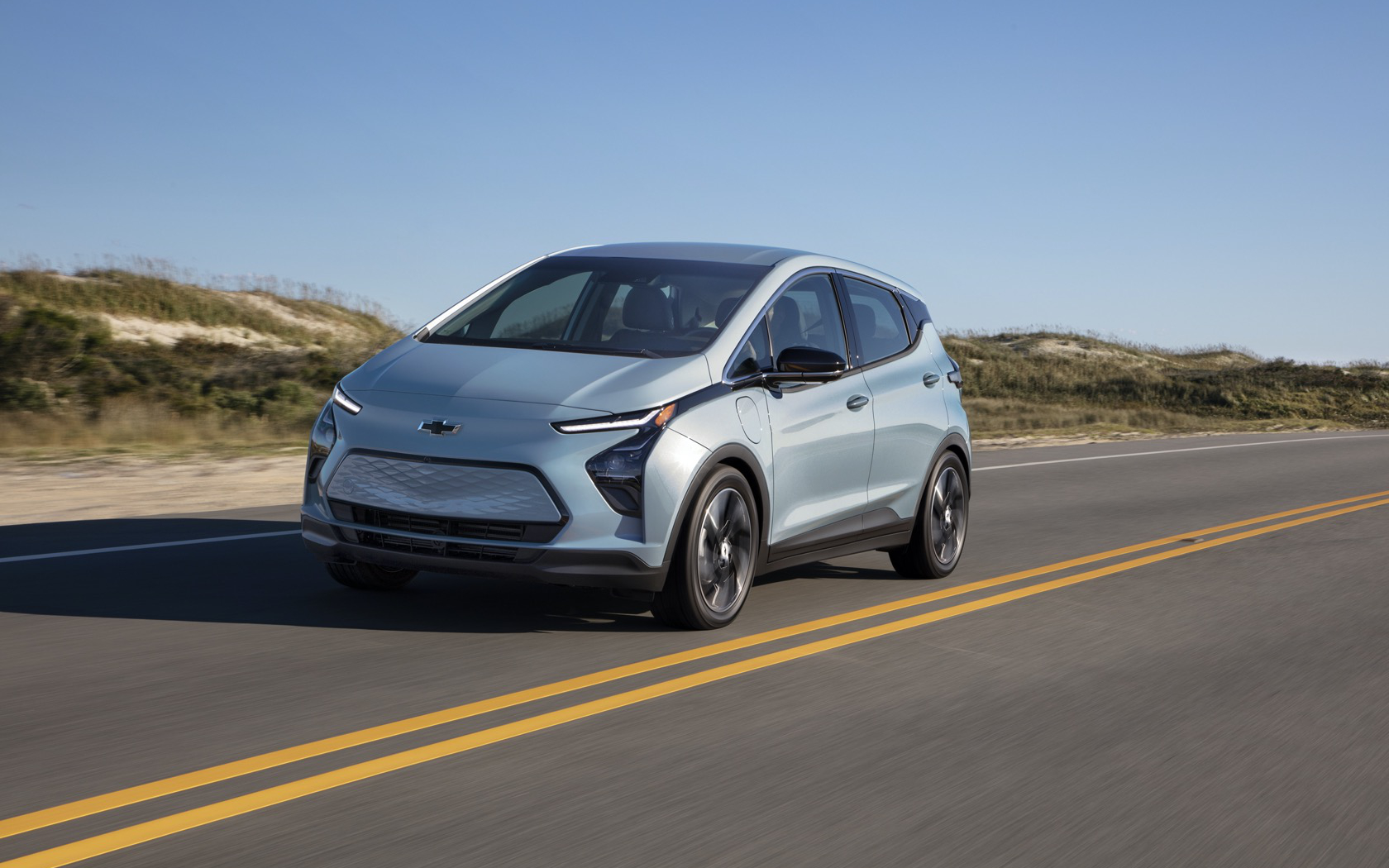 At $31,995 including destination, and before any state and utility incentives, for an estimated 259 miles of EPA range, the 2022 Bolt EV offers some serious miles-per-dollar. It’s actually around $5k less than the version it replaces. A Hyundai Kona Electric, in contrast, clocks in at 258 miles but starts at $38,565 before incentives; Nissan’s perennial favorite, the Leaf, starts at $32,570 before incentives, but that only gets you 149 miles.

There’s one big factor worth remembering, though. GM has sold enough electric cars now that it’s no longer eligible for the US federal tax credit: that’s the $7.5k incentive that helps make the price tag of many new EVs be more palatable. Instead, you’re looking at whatever state, local, and utility incentives and rebates might be available to you.

Yes, the 2022 Bolt EUV is a crossover, but without AWD

Bolt EV fans, Chevrolet says, have long been asking for a larger version of the all-electric hatchback. That, in effect, is just what the 2022 Bolt EUV is: roughly 6-inches longer, more upright, and generally chunkier. However, whether it actually fits the definition of a “proper” crossover SUV is questionable. 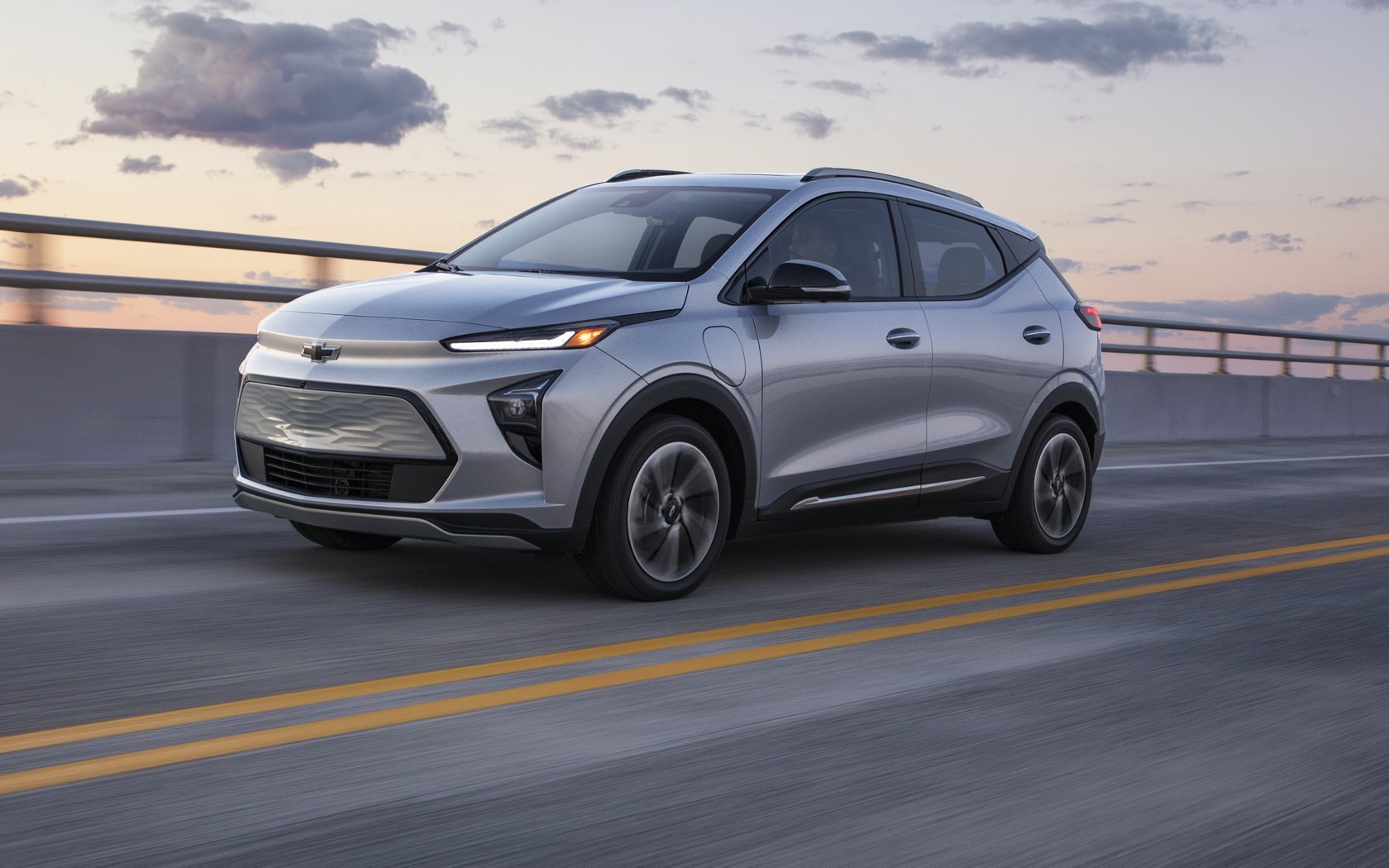 Owners’ specific request, Chevy claims, was for more rear seat legroom. Sure enough, most of the extra length for the EUV goes into giving passengers in the back more space for their legs. What you don’t get, though, is an AWD option.

Instead, both the 2022 Bolt EUV and the Bolt EV are still front-wheel drive, just as they were before. That helps keep costs down – it means Chevrolet can use a single motor – and range up, but it does mean those wanting more traction to deal with snow and ice, or even take their electric crossover off-road, are out of luck. It’s arguably the biggest drawback of the new car.

While it may not be designed for the rough stuff, the 2022 Bolt EUV does have a wildcard for the highway. It’s the first Chevrolet to offer Super Cruise, the hands-free driver assistance technology that until now has only been offered on select Cadillac models. Head to part of the roughly 200,000 miles of mapped divided highway and trunk roads that GM has mapped, and the electric crossover will be able to maintain pace with traffic and hold its position in the lane, without you keeping a guiding hand on the wheel. 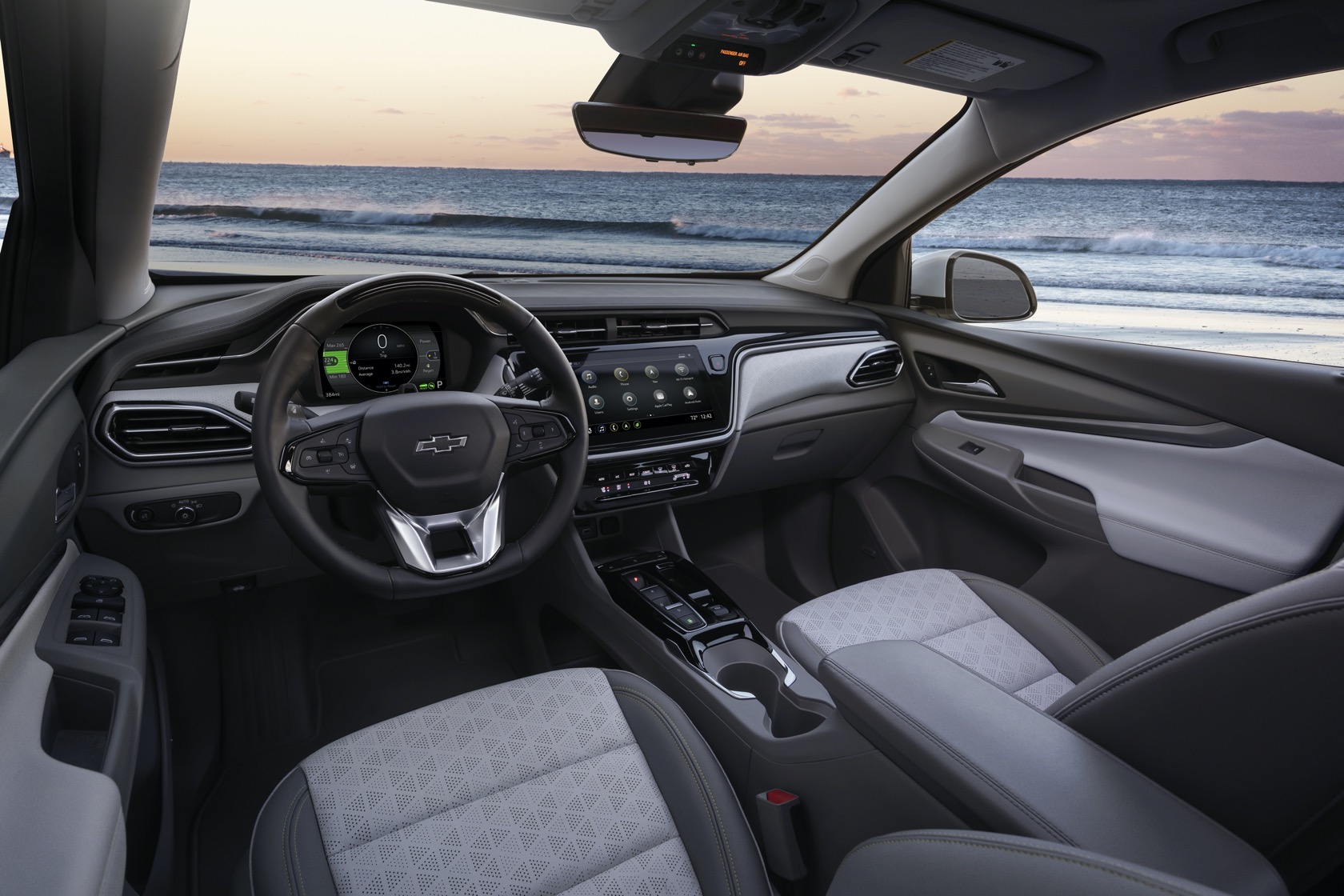 Super Cruise is a great system – it relies on a face-tracking attention monitor to ensure you’re paying sufficient attention – but unfortunately there are two drawbacks here. First, is that only the Bolt EUV offers it as an option. The Bolt EV, meanwhile, sticks with regular adaptive cruise control.

The other frustration is that this isn’t Enhanced Super Cruise. That’s the system recently launched on the new 2021 Escalade, and it can automatically change lanes when you indicate, among other improvements. Chevy blames the older EV platform used on the Bolt EUV for that.

Two cars, one platform – though it’s not GM Ultium

Both the Bolt EV and the Bolt EUV use the same underlying architecture. Indeed, it’s an iteration of the same platform that the Bolt EV first launched on back in 2016. The upside there is cost-effectiveness, and flexibility. While the sheet metal for each car may be unique, the commonality in other components means Chevrolet can adjust production depending on which version faces the strongest demand.

What it’s not, though, is GM Ultium. That’s the all-new platform which General Motors developed for its next-generation EVs, and which will underpin models like the Cadillac Lyriq, GMC Hummer EV, and more. Ultium has several key advantages, not least that it supports all-wheel drive configurations, while its new battery system should mean longer range too. 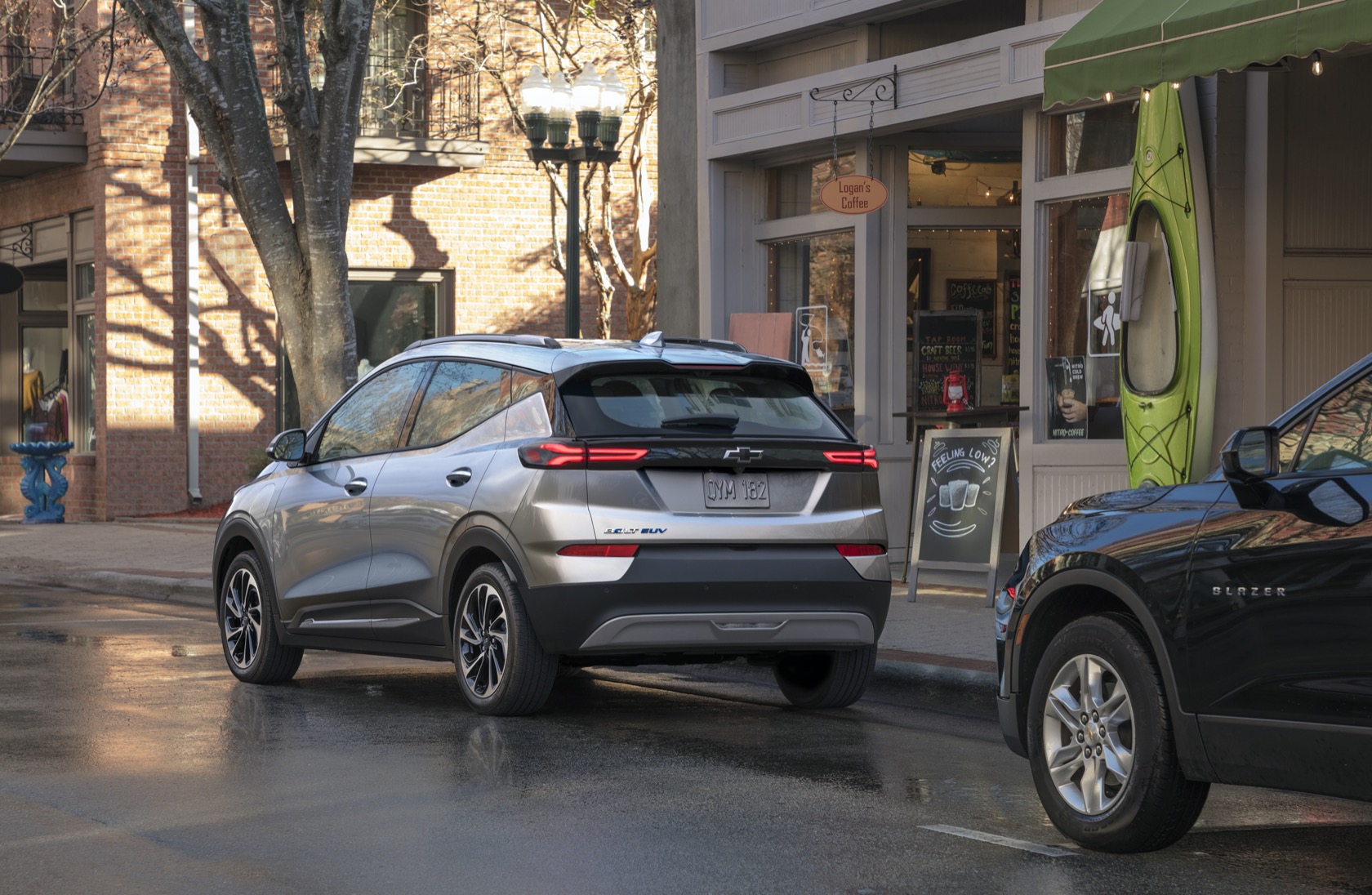 Chevrolet says there’s no plan, though, to shift the Bolt EV or EUV to Ultium, and it’s not hard to see why. It’ll likely take a few years before the new platform is as cost-effective as the existing architecture, which has had four years or so to build a supply base with scale and gain volume. Similarly, there’s no current plan for any major change in the Bolt duo’s battery tech: GM is focusing its development efforts on Ultium, where the latest range estimates are even more glowing than initially promised.

For all that there may be frustrations, there’s still plenty that Chevy got right. Indeed, much of the 2022 Bolt EUV and Bolt EV news sounds like a direct answer to requests and frustrations from early-adopters of the Bolt EV until now. 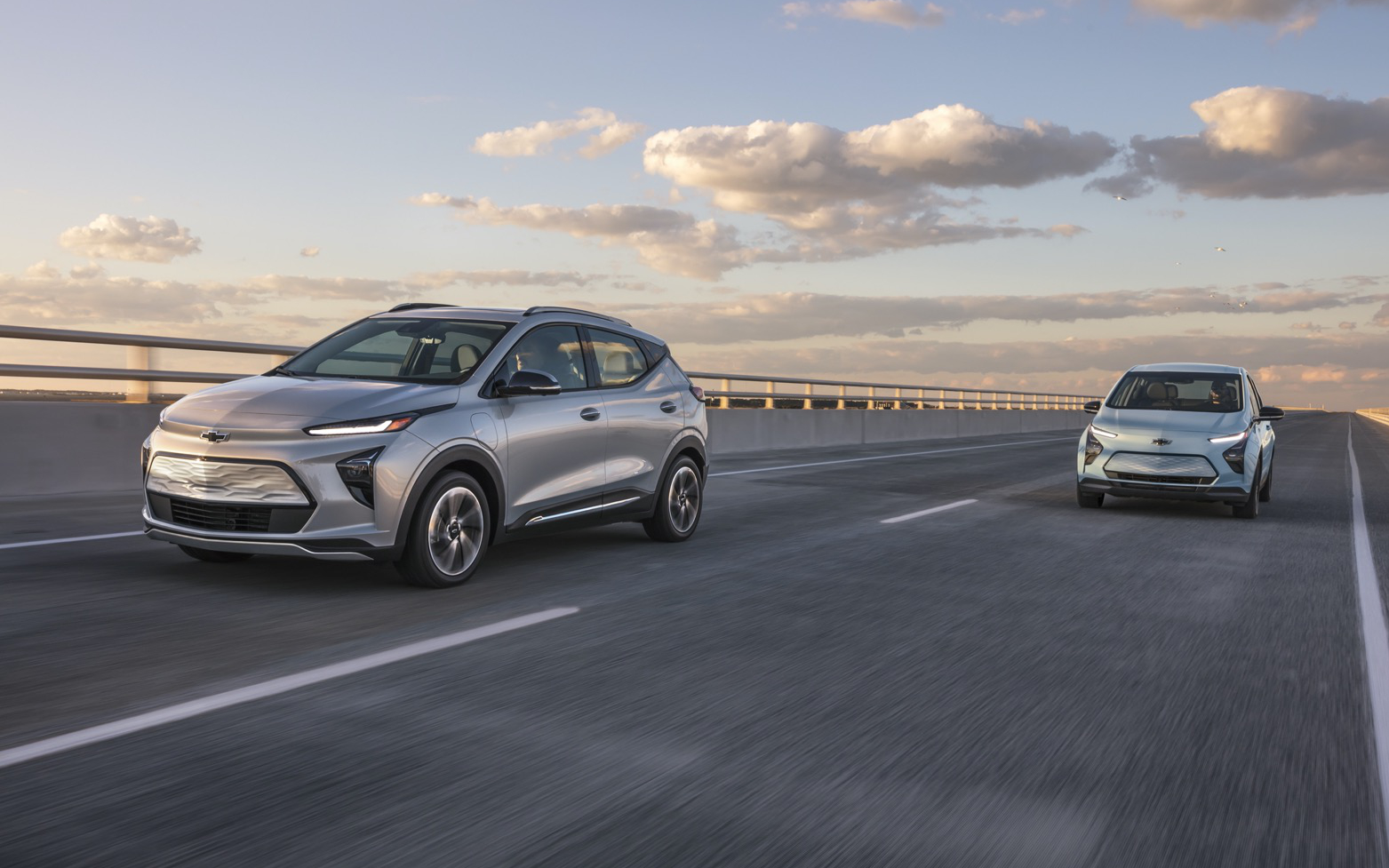 You get 11 kW fast charging support as standard on both cars, for example, rather than as a paid upgrade. The Bolt EUV comes with a dual-mode 120/240V charger, too; it’s optional with the Bolt EV. Those who buy or lease one of the new cars can also probably have Chevrolet foot the bill for installation of a 240V outlet (assuming their home’s wiring is up to scratch). Considering the bulk of charging happens when your car is parked at home, that’s a big benefit.

Inside, the detailing is where it counts. There’s now wireless Apple CarPlay and Android Auto as standard, for example, and the 10.2-inch infotainment touchscreen gets new, updated software. Perhaps best of all, the drivetrain now remembers your preference for one-pedal driving even after you restart the car. They’re little details, but they definitely add up, and while we’ll have to wait to see how competitive GM’s Ultium based EVs prove to be, there’s plenty to like in its most affordable electric models.