If the 2022 Acura MDX is a revolution in three-row SUVs, it could be because it doesn’t treat the driver as an afterthought. Sharper styling, a more upmarket cabin, and lashings of extra tech help justify the fourth-generation MDX’s climb into more expensive territory, but Acura still takes its mission statement seriously. A rewarding experience behind the wheel can’t be sacrificed, even in a family hauler.

The all-new platform allowed Acura’s designers to demand the lengthy hood, expansive dash-to-axle, and rear-biased cabin that their hearts desired, and the result is a fairly stunning SUV from most angles. Wider, longer, with more wheelbase and broader front and rear tracks, the new MDX wears Acura’s current aesthetic beautifully, from the outsized grille and narrow headlamps, to the sharply creased and scalloped sides. 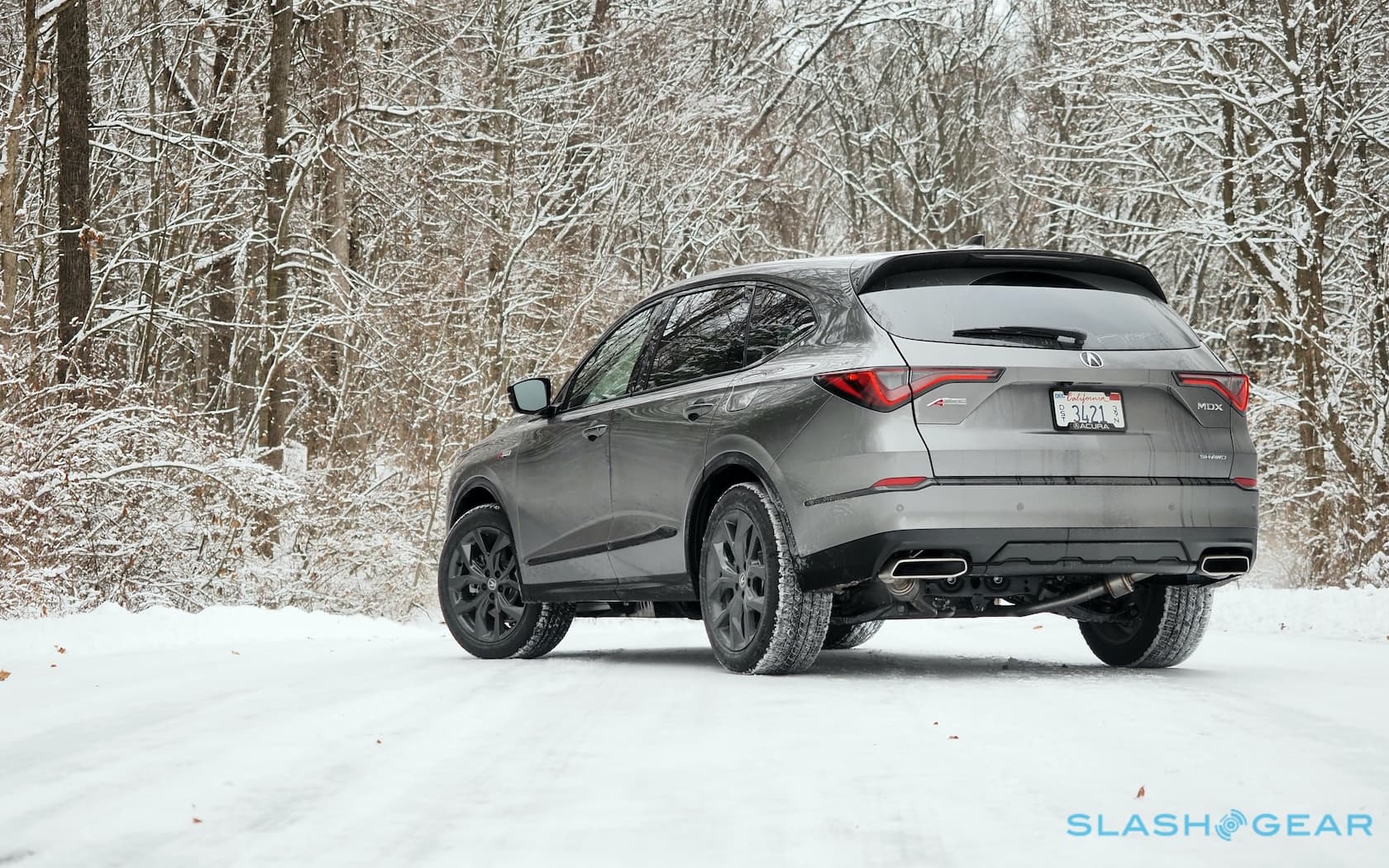 It looks poised and purposeful, and it hides its heft well. Parked up next to an RDX, the new three-row SUV looks elevated and imposing, rather than a flabby acquiescence to practicality. 19-inch wheels are standard, with 20-inch upgrades on the Tech and A-Spec trims. 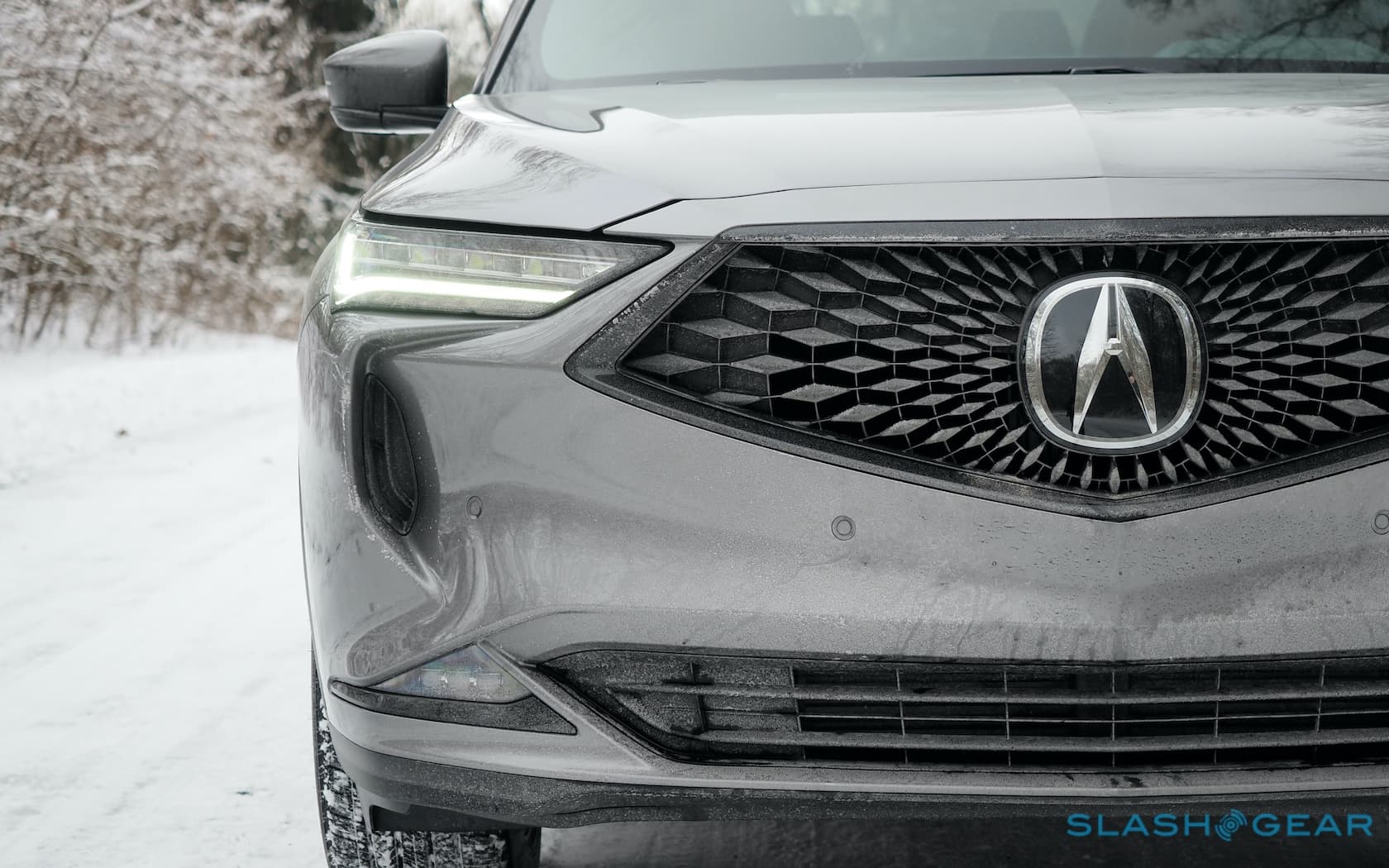 Underneath there’s the usual battle between demands for sportiness and the requirement for comfort that any plush SUV faces. Acura says it’s the most rigid SUV it has made, up 32-percent in torsional rigidity, and the old MacPherson strut front suspension is gone in favor of a double-wishbone system. The brakes are bigger, the variable ratio steering promises less wheel-twiddling, and there’s an improved multi-link rear suspension system with dual load paths to cut out harshness from surly asphalt while also boosting cargo and third-row space.

Acura has carried over its 3.5-liter V6 with 290 horsepower and 267 lb-ft of torque, now fairly unusual among four-cylinder rivals. It’s paired with a 10-speed automatic rather than the old 9-speed; paddle-shifters are standard, while the wider ratio range means a perkier pick-up in first gear. It can downshift up to four ratios at a time, too. 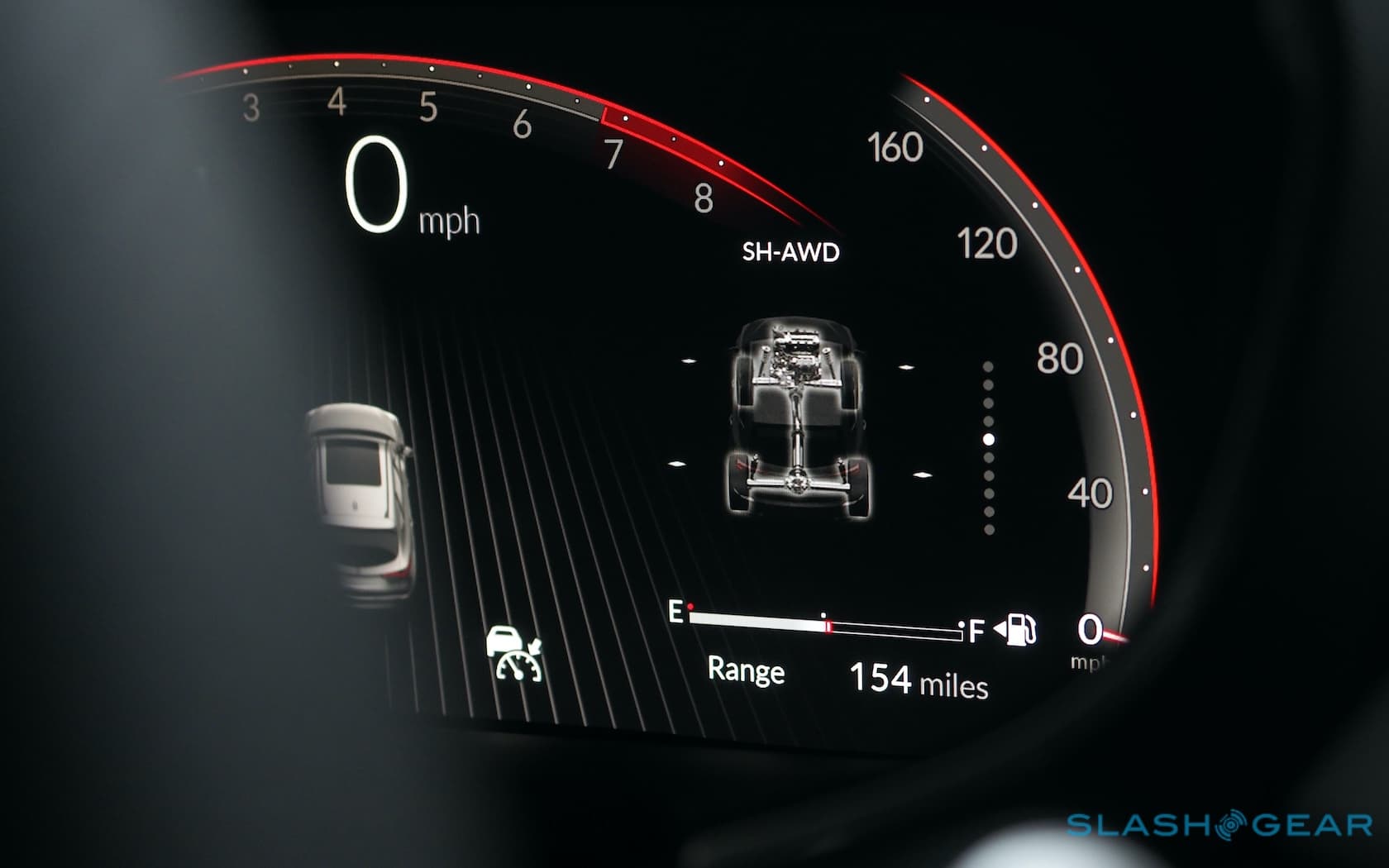 Front-wheel drive is standard, but Acura is understandably eager to push its 4th Gen Super Handling All-Wheel Drive (SH-AWD). That’s a $2k option on top of the base $46,900 MDX and $51,600 MDX Technology Package, and standard on the $57,100 A-Spec and $60,650 Advance Package (all plus $1,025 destination). It can push up to 70-percent of engine torque to the rear, and then distribute up to 100-percent of that to either the left or right wheels for proper torque vectoring. 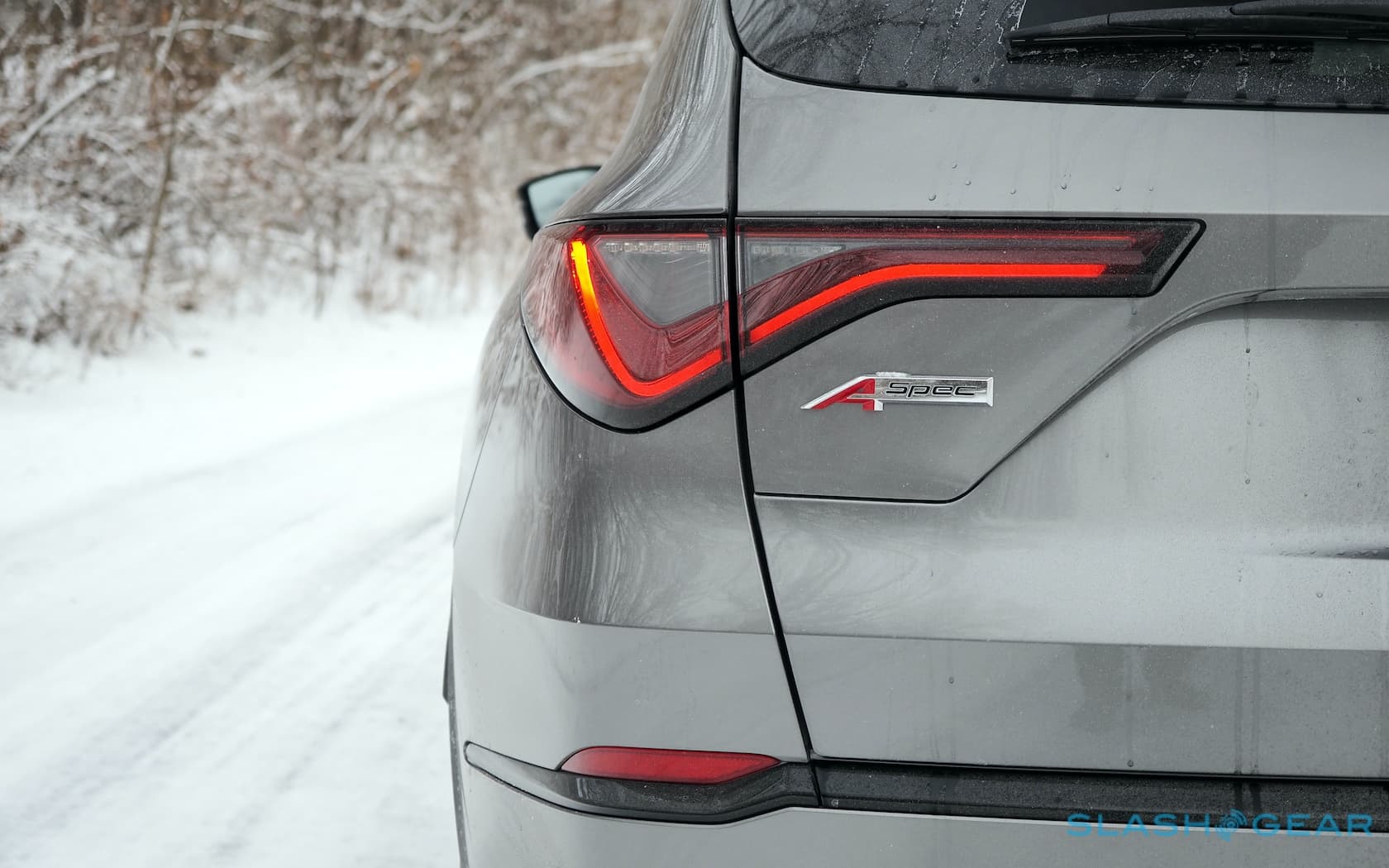 Despite having six cylinders, Acura says it’s confident that economy is competitive with similarly-priced inline-4 rivals. Figure on 19 mpg in the city, 26 mpg on the highway, or 22 mpg combined from the FWD SUV, or 19 mpg city, 25 mpg highway, 21 mpg combined for the SH-AWD version.

Conspicuous by its absence is any sort of electrification. Acura doesn’t have a plug-in hybrid or full-electric version of the MDX, though it’s not counting something like that out down the line. “Electrification is going to be an important part of the company’s future direction,” insists Tom Nguyen, global development leader for the 2022 MDX, pointing out that “by 2030 two-thirds of our products are going to be electrified.” For now, though, your choice is Acura V6 or another three-row SUV. 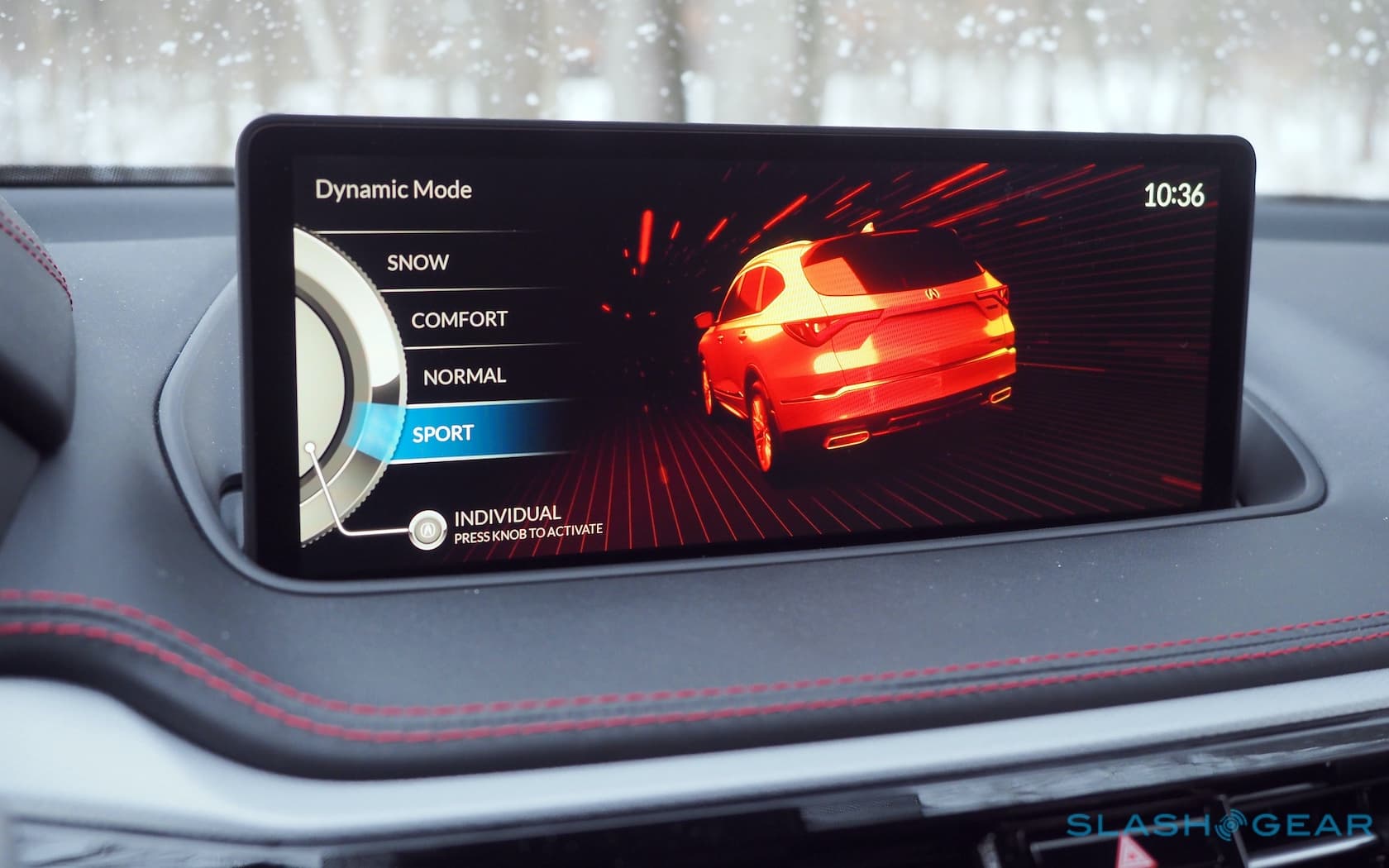 Thankfully it’s a decent engine. Solid levels of power that the new gearbox isn’t stingy with, kicking down readily but without losing decorum in the process. The Integrated Dynamics System – that’s Acura-speak for “drive modes” – has four presets, for Snow, Comfort, Normal, and Sport. Unusually, you can set either Comfort or Normal as the default. An Individual mode allows you to mix’n’match the settings for your own recipe, adjusting things like gearbox eagerness and steering weight.

Acura’s insistence on putting the driver first does leave the 2022 MDX more crisply sprung than most rivals. It uses the same sort of amplitude reactive dampers as featured on the new TLX, with two sets of circuits that promise both compliance and sporting stability. Certainly, if you push the MDX through the corners it handles flatter and with more agility than you’d expect from a 4,500 pound SUV. 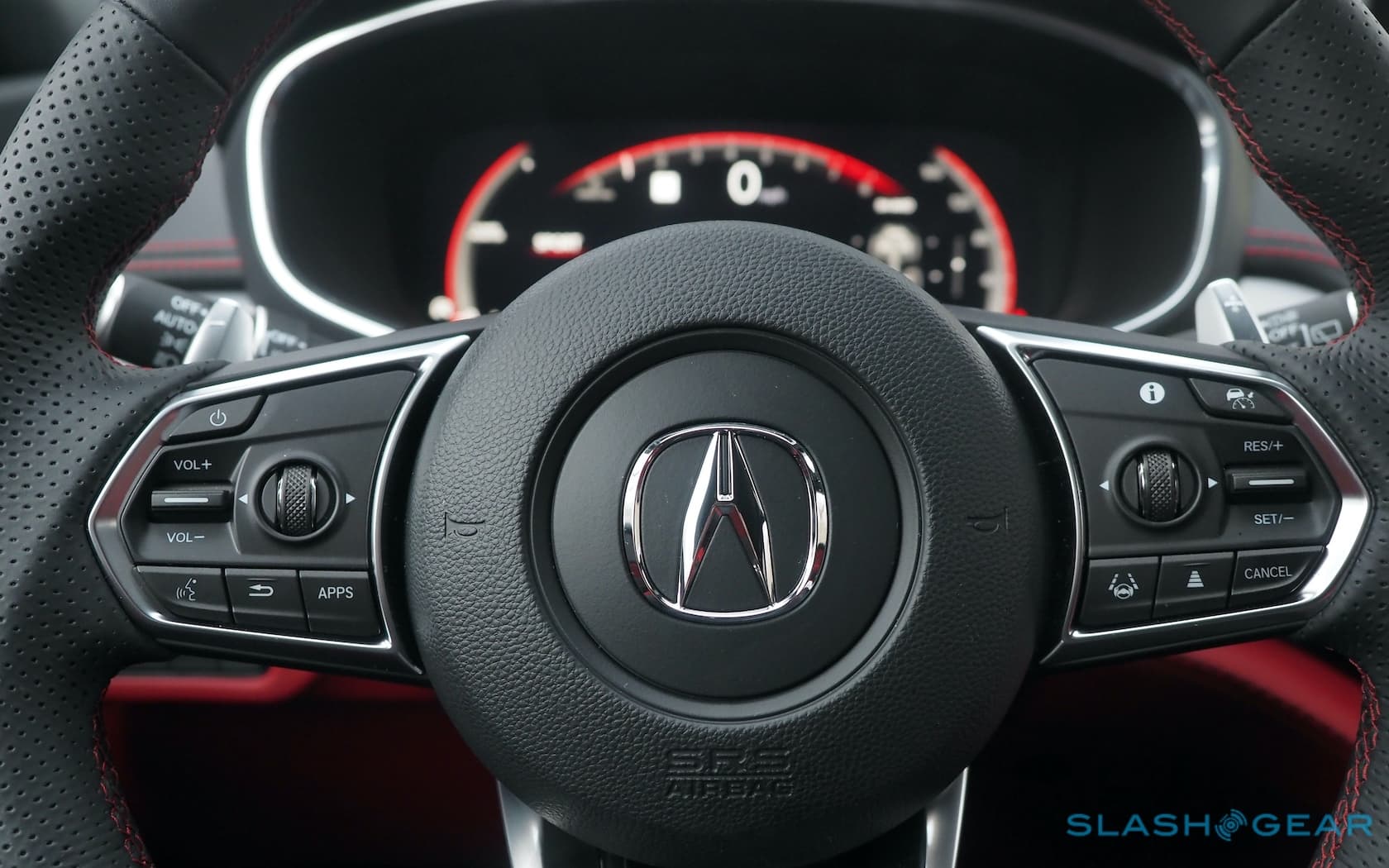 Flip to Comfort mode, though, and there’s no fancy adaptive damping or air suspension to soften all that up. The all-season performance Bridgestone rubber with a 15-percent stiffness improvement in the sidewall on my MDX A-Spec test car probably didn’t help matters, but it was definitely firmer across ruts and potholes than some of its competition.

Flicked to Sport mode, meanwhile, with the push-button transmission set to “S” too, and things made more sense. SH-AWD obviously shines on a performance car like the NSX, but it proves its worth in much larger metal like the MDX too. Think ample stability even on snowy backroads, combined with enough cornering urgency to shake loose the lunch of any unfortunate passengers. 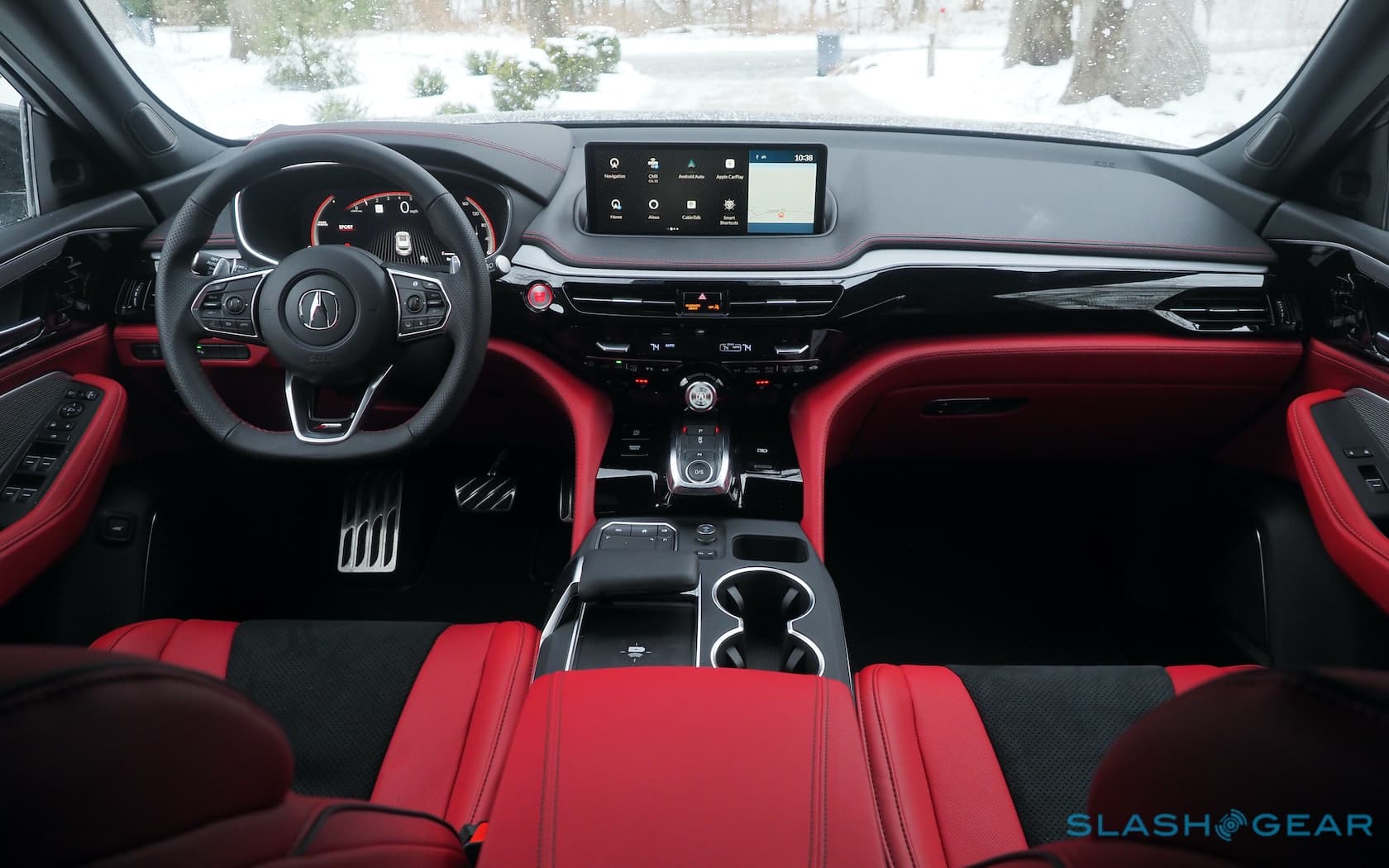 That would be a messy shame, because the cabin is a big step forward. Indeed, anybody coming from an old MDX will be blown away. Gone is the confusing dual-display infotainment system, and a dashboard reminiscent of Iron Man’s codpiece. In its place is an intentionally authentic selection of materials: think real aluminum, real open-pore wood, and real Milano leather with contrast stitching.

The MDX still errs on the side of dedicated buttons for many of its features, but the end result feels a lot more cohesive than in the old SUV. All the same, there’s plenty of glossy black plastic and, though it contrasts nicely with the vivid red leather in my A-Spec, it definitely picks up dust and fingerprints. 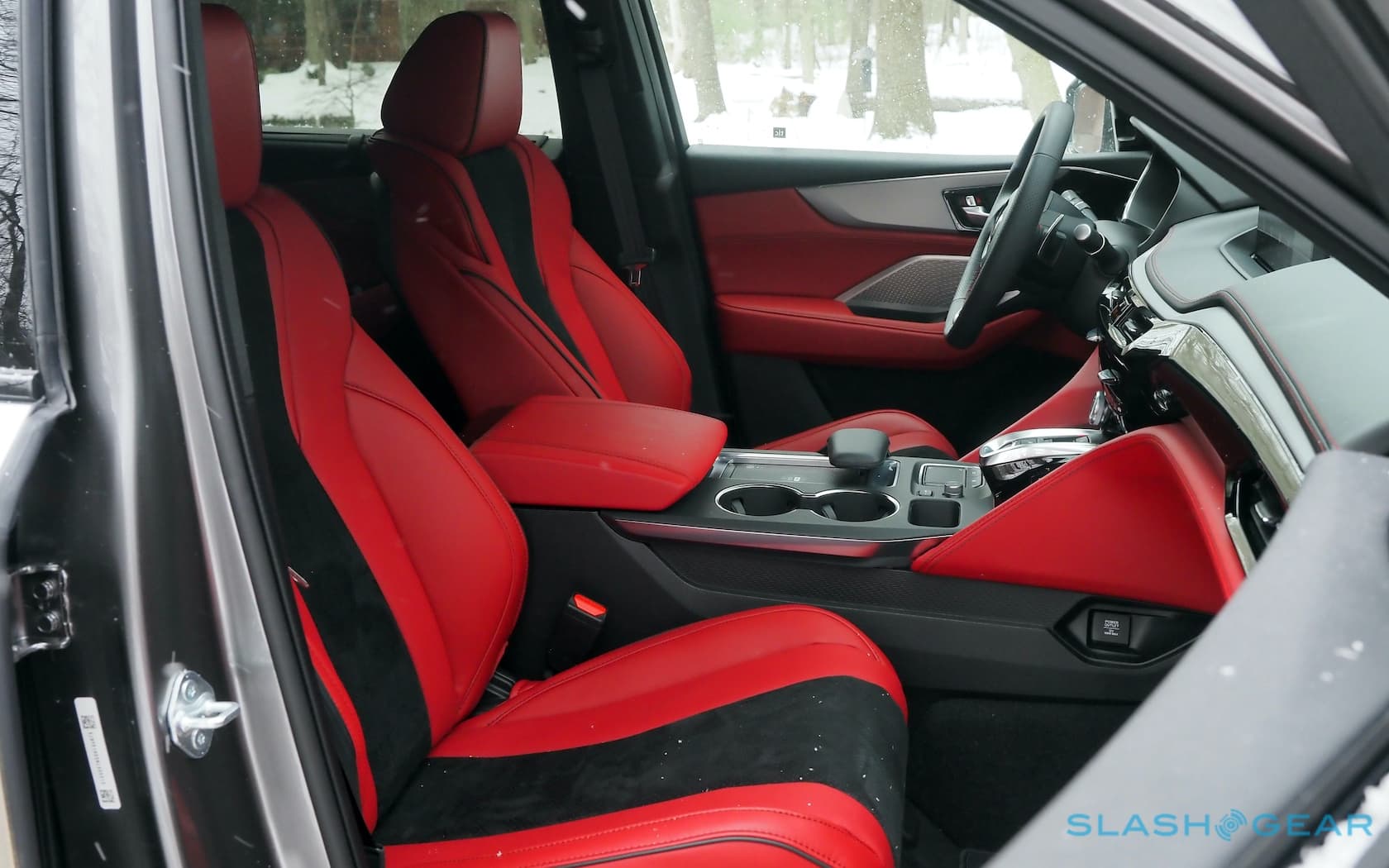 Acura remains wedded to its touchpad-controlled infotainment system, making the argument that it drags your attention away from the road less than a touchscreen would. Sadly I just can’t get with that program. Acura’s True Touchpad Interface stumbles by diverging both from smartphone and laptop interfaces. I can’t tap the huge 12.3-inch center display like I would my smartphone, but you can’t really swipe around as you would on a laptop trackpad since Acura’s system maps 1:1 positions on its ‘pad to locations on the screen.

I suspect it’s a case of the research saying one thing, but the reality of how we’ve trained our brains and fingers to use systems being something different. 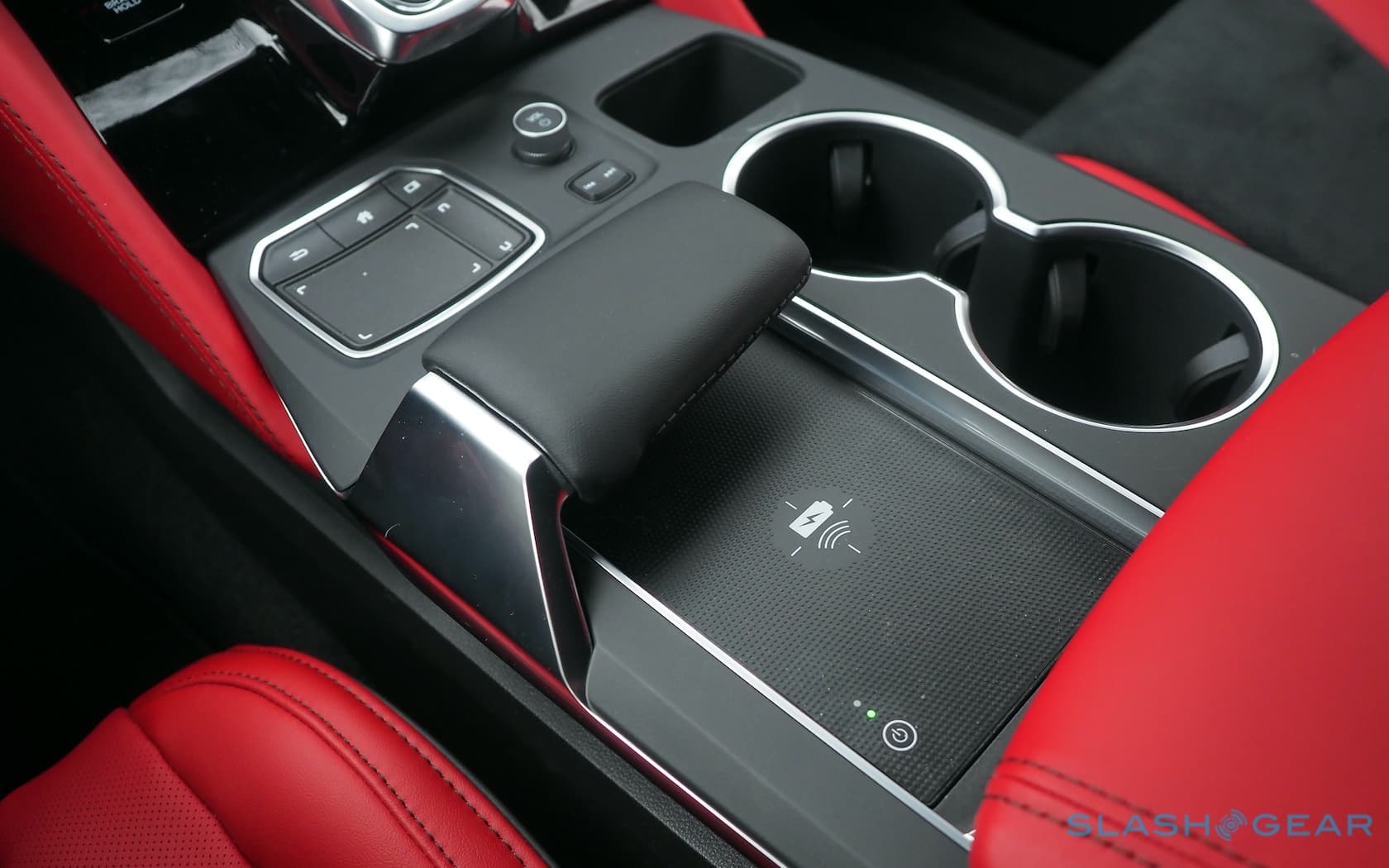 It’s a shame, because Acura’s UI is quite pleasant. The 2022 MDX gets a new processor and a Full HD panel with 60Hz refresh, and as a result everything is smooth and slick. AI-driven smart shortcuts promise to figure out what you use most often and shuffle them to the fore; I didn’t have the SUV long enough for it to get to grips with my own, particular whims. Those profiles are based on the keyfob, too, so if you’re sharing the MDX you can have two separate sets of suggestions.

There’s better onboard voice recognition now, along with integrated Alexa. You get wireless Apple CarPlay and Android Auto, and the Advanced trim adds a 12.5-inch color head-up display. A 12.3-inch digital gauge cluster is standard across the board, as is a 15W wireless charger that’s sized to accommodate even the burliest of phones. 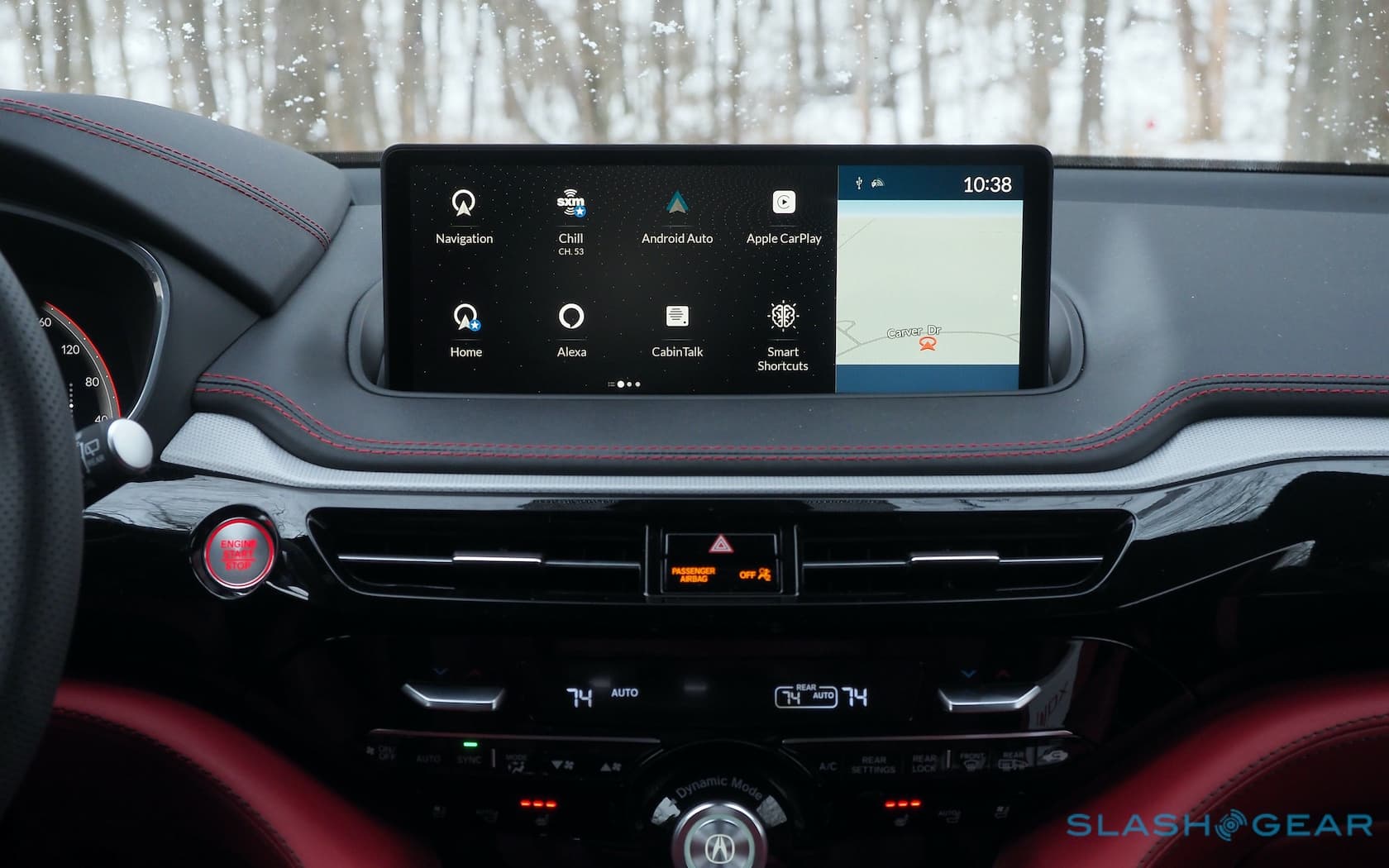 Tri-zone climate control is standard, as are heated front seats; A-Spec and Advanced trims get ventilated front seats too, but only the top spec gets heated rear outboard seats. Navigation is standard on the Technology Package and up, as is Acura’s 27-color ambient LED lighting. If you want the fanciest ELS Studio 3D Premium Audio System with its 16 speakers and ear-flattering dynamics, you’ll need an A-Spec or Advanced MDX, but for audiophiles it’s probably worth it.

I’m a fan of Acura’s front row seats – 12-way power adjustable with power lumbar support, unless you go for the Advanced trim in which case you can tweak the thigh extension and side bolsters too – which straddle a pleasing line between squish and support. The smaller wheel is a nice change, too, with its thicker rim and, in A-Spec form, flat bottom. Why did Acura then go and hide the front USB-C and one of the USB-A ports in a pop-up panel, knowing that people will probably leave the cables plugged in? Your guess there is as good as mine. 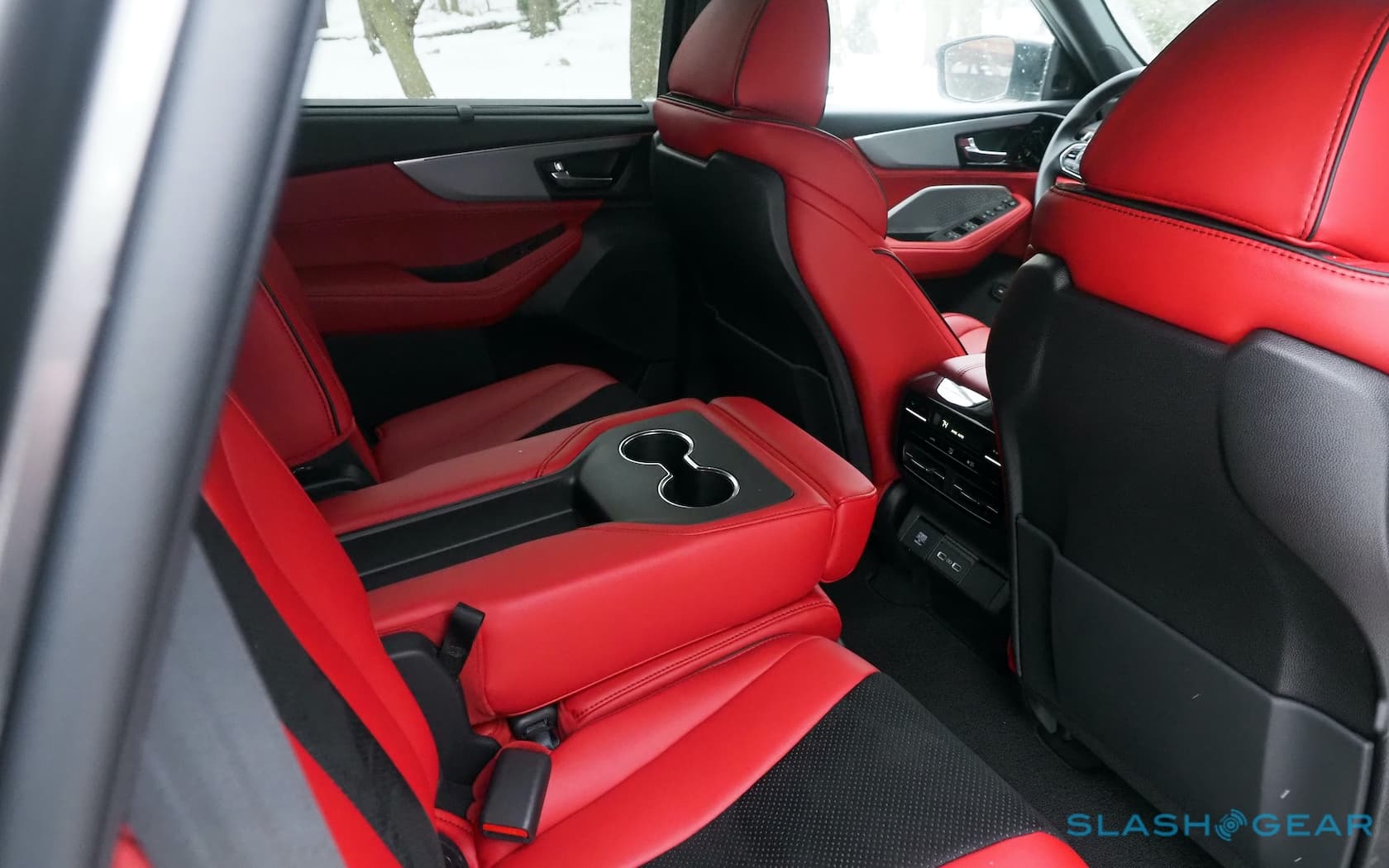 The second row can’t be had with captain’s chairs, which is another odd decision, Acura instead pushing its removable center seat. That can flip upright to squeeze in a third person, fold down into a beefy armrest, or be pulled out altogether. It’s clever, and standard on all trims, but the resulting outboard seats aren’t as fancy as what you get on other luxe trucks. In A-Spec and Advanced trims, there’s a CabinControl app that allows for smartphone control of music, rear climate, sunshades, and – with permission – navigation settings too. They also get CabinTalk to amplify the driver’s voice as you shout at passengers for messing with the playlist. 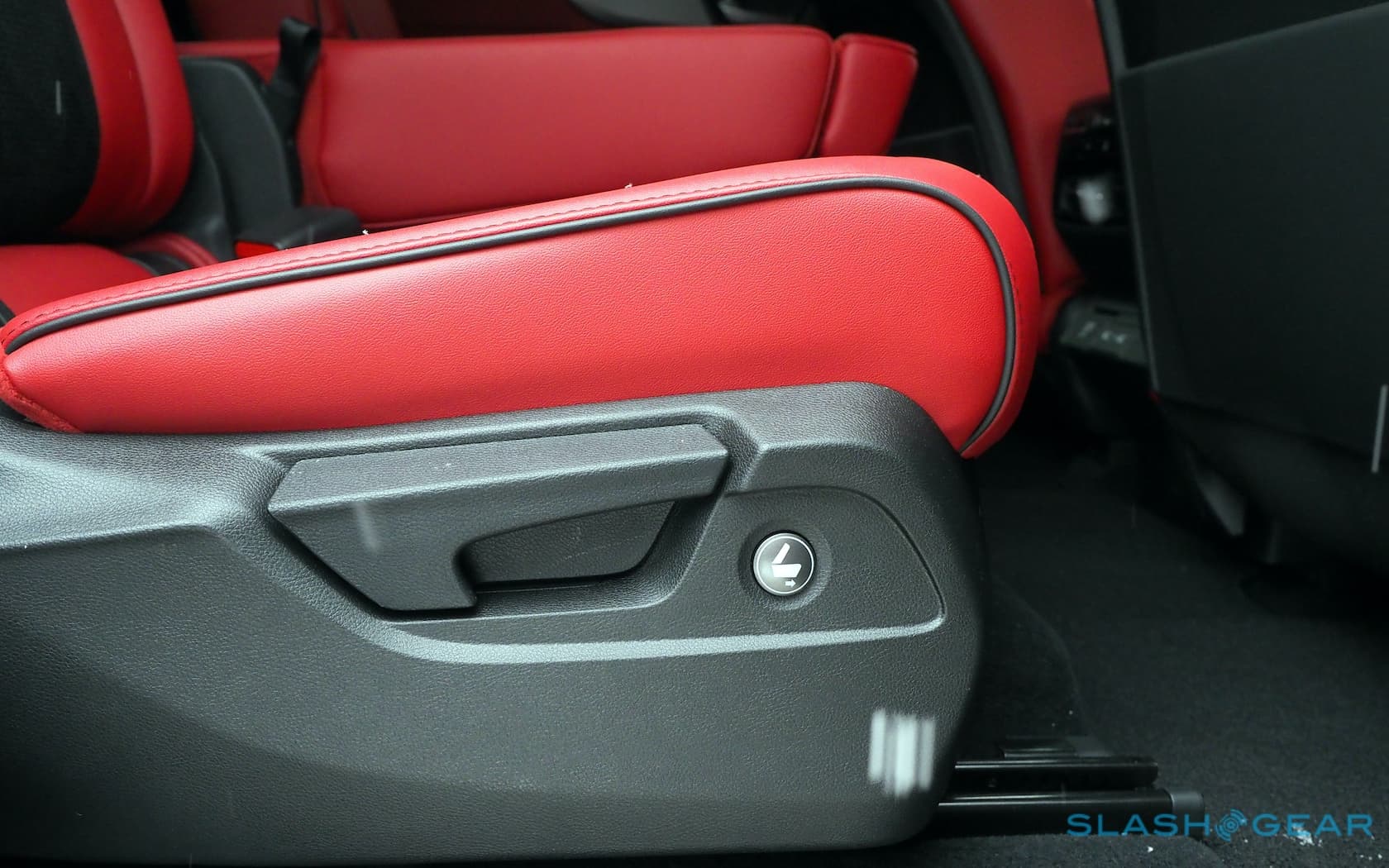 In the third row, meanwhile, Acura says legroom is up more than two inches, and there’s about a half-inch more headroom. I’m 5’8 and my legs had no issues – nor were my knees around my ears – but my scalp was grazing the headliner. At least with the panoramic sunroof it’s fairly airy back there, and Advance trim adds USB-A ports in the third row for charging.

As for the trunk, that’s now 16.3 cu-ft with all three rows up, a 1.5 cu-ft improvement over the old MDX. Drop the third row and it expands to 39.1 cu-ft; drop the second and it grows to 71.4 cu-ft. There’s also a clever reversible cargo floor, carpeted on one side and hard on the other, in case you need to transport wet boots, clothes, or pups. A power tailgate is standard, and on the Advance trim you can have it auto-close when you hit the button and then walk outside of a roughly 3 foot zone. Throw in the right tow package and AWD, and the MDX will handle up to 5,000 pounds. 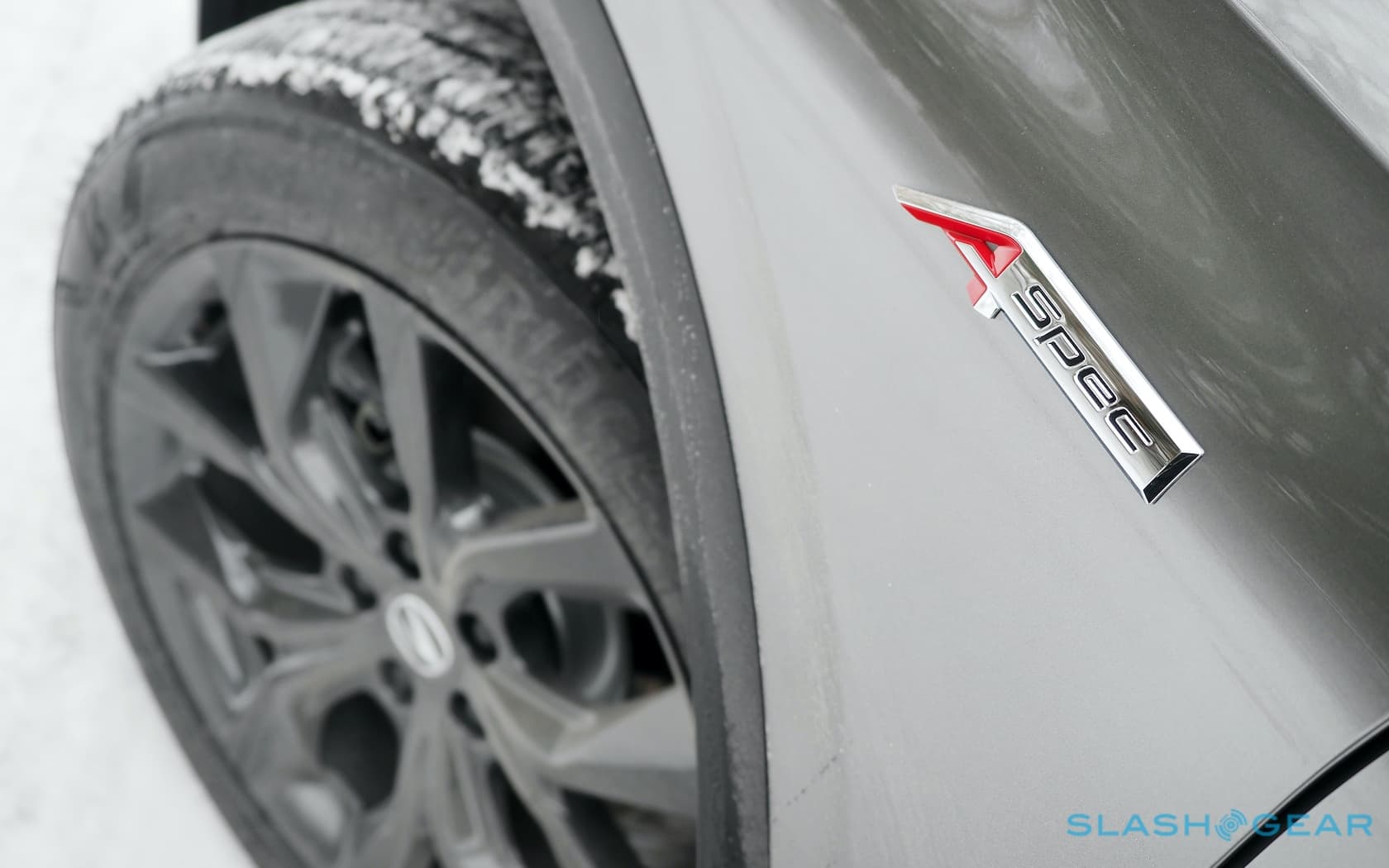 AcuraWatch is standard across the board, with adaptive cruise control, lane-keeping assistance and departure warnings, blind spot information, rear cross-traffic monitor, and forward collision warnings with mitigation braking and advanced pedestrian detection. Traffic Jam Assist works at speeds under 45 mph. On Technology Package trims and above there’s Low Speed Braking Control, which uses the parking sensors to automatically slow the MDX if you’re about to bump into something like a shopping cart. It works at parking lot-friendly speeds of up to 6 mph.

Acura’s goal with the new MDX is fairly blunt: move the three-row SUV up in the world, positioning it as the brand’s new flagship and taking on competitors from Audi, Lexus, Volvo, and similar in the process. To do it, the 2022 MDX combines the tried-and-tested V6 and SH-AWD with styling that’s finally memorable, and a decent level of standard technology and active safety. 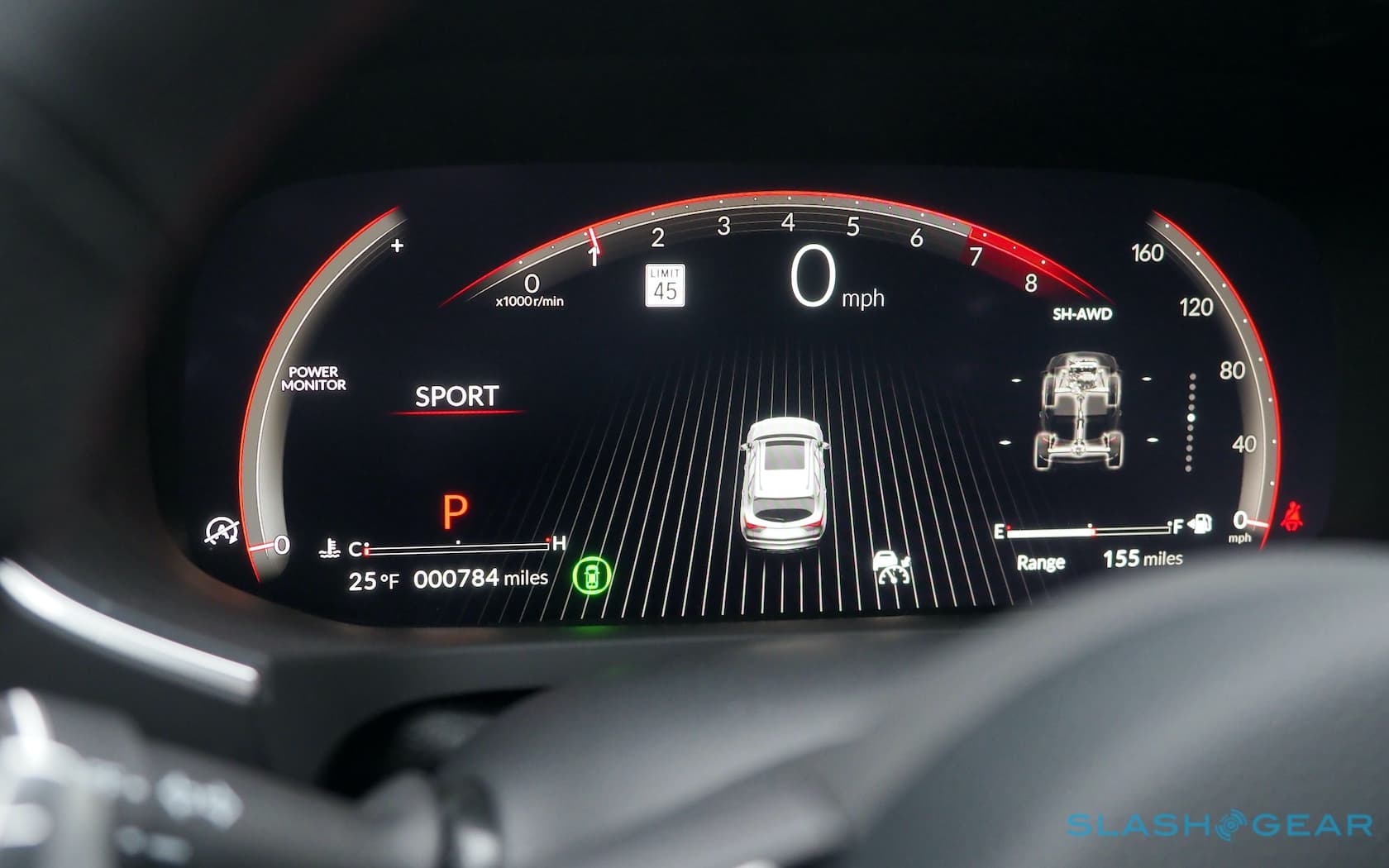 Come the Summer, meanwhile, we’ll see what else the engineers have been working on, in the shape of the new MDX Type S. It’ll pack a 3.0-liter turbo V6, with 355 horsepower and 354 lb-ft of torque, and deliver that extra twist of sporting eagerness that has helped buoy more potent SUVs from rivals. As well as a more aggressive body kit it’ll get 21-inch wheels with Brembo brakes, along with high-end tech and comfort features like the ELS Studio 3D system inside.

Of course, Acura isn’t alone in seeing rich pickings in the luxe SUV segment. Genesis has made a splash recently, its 2021 GV80 even more dramatic in its aesthetics and more lavish inside than the new MDX. Those who really need the third row will probably still lean toward the Acura – only one GV80 trim offers it, and it’s far more snug back there – but it’s a reminder all the same that this fiercely competitive category is only getting more demanding. 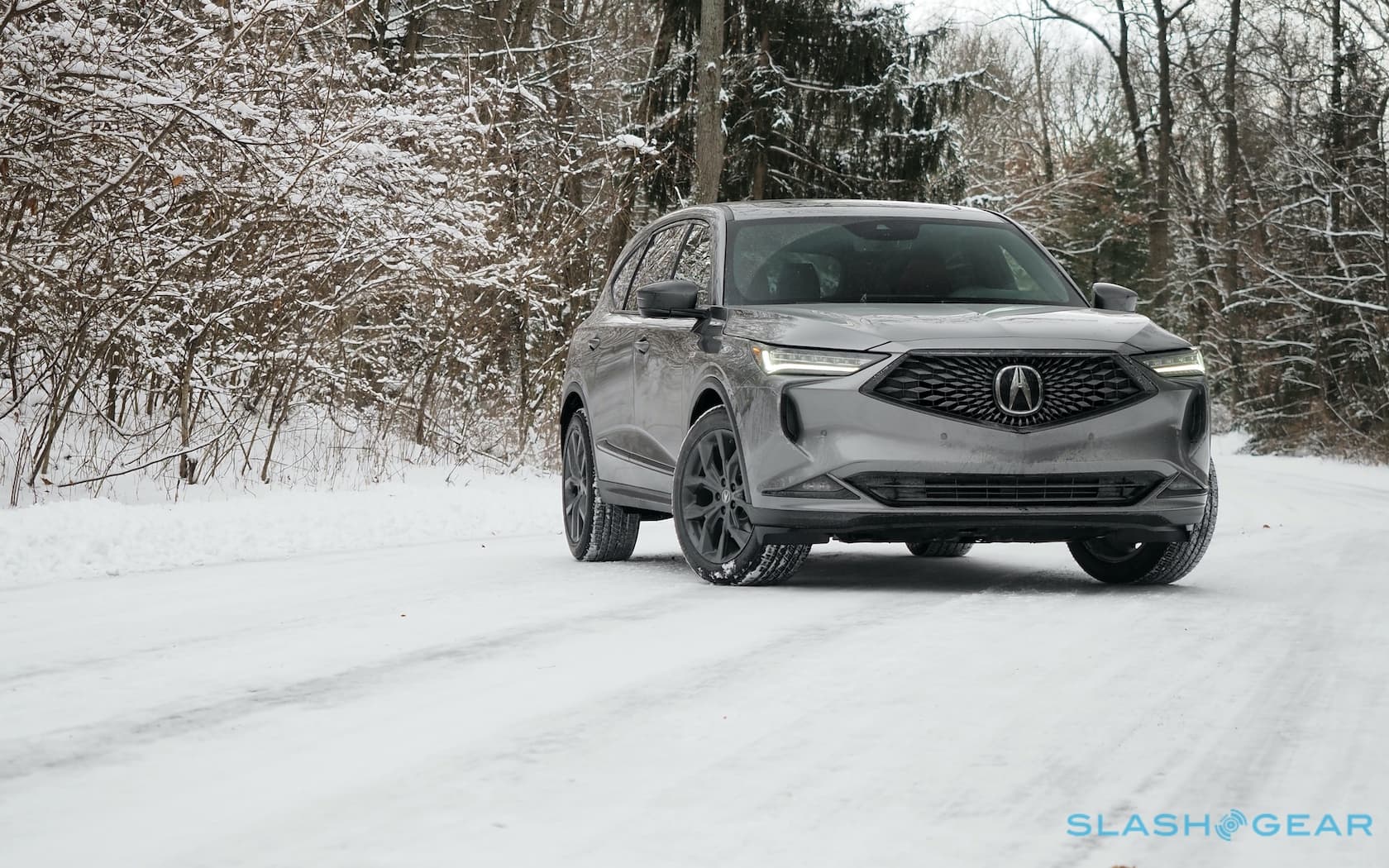 It leaves the 2021 MDX counting on its sporting credentials to earn its place, and there Acura’s argument is sound. It’s a play for the driver, more than the driven: a reminder that, when the brood’s not onboard, your capacious SUV need neither be wallowing nor sluggish. Some rivals may offer more luxury, but most can’t keep up with the new MDX’s refusal to accept that practical must also mean dull.