You may not know what the 2021 Genesis GV80 is, in among the sea of SUVs that crowd the roads, but you’ll definitely not miss it. In just a few years, Genesis’ design language has developed from “look, we can do a chrome grille too,” to something unique and striking. Unapologetically different, and absolutely all the better for that. What it sorely needed, though, was an SUV to use that on.

The result is the 2021 GV80, and its starts out bold: a heroic crest feathered with Genesis’ quad LED lights. Those strakes follow around to the front fenders, too, a neat piece of visual continuity that, though we’ve seen it on the G90 and G80 already, still hasn’t got old. An uninterrupted shoulder line sweeps to the rear, the GV80’s roofline gently tapering in tandem, to matching rear LED clusters and a scalloped rear hatch. 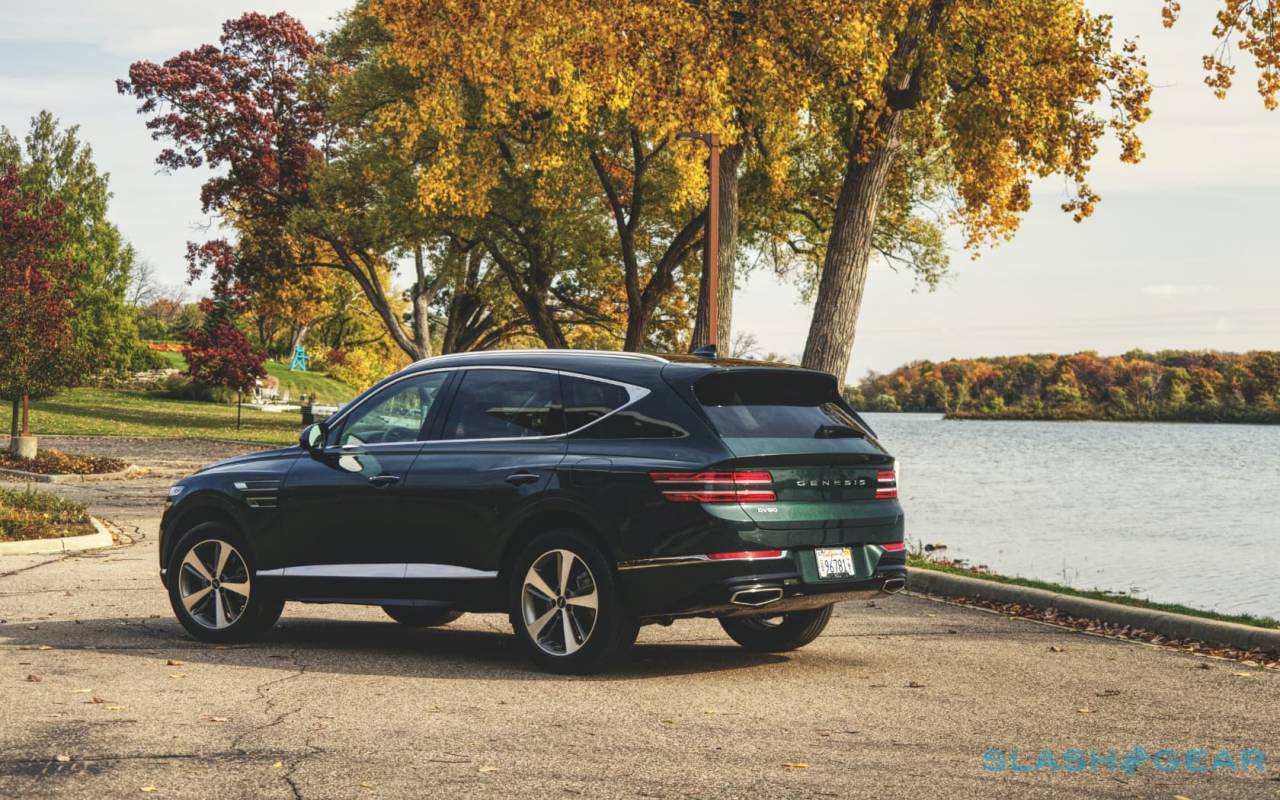 It looks natural, and fluid; as though the sculptor teased back fluted clay with their fingertips. If I’ve a complaint, it’s that the unusual wheels we’ve seen Genesis offer on its recent sedans aren’t available on the SUV. From the 19-inch alloys standard on the 2.5T RWD, the 20-inch upgrades in that model’s Prestige package, or the largest 22-inch examples on the 3.5T AWD Prestige, the 5-spokes lack the same melodrama.

Inside, things are equally impressive. Genesis refers to its cabin design language as the “Beauty of White Space,” a conscious nod toward relative minimalism and visual cleanliness. That’s a high bar to set. 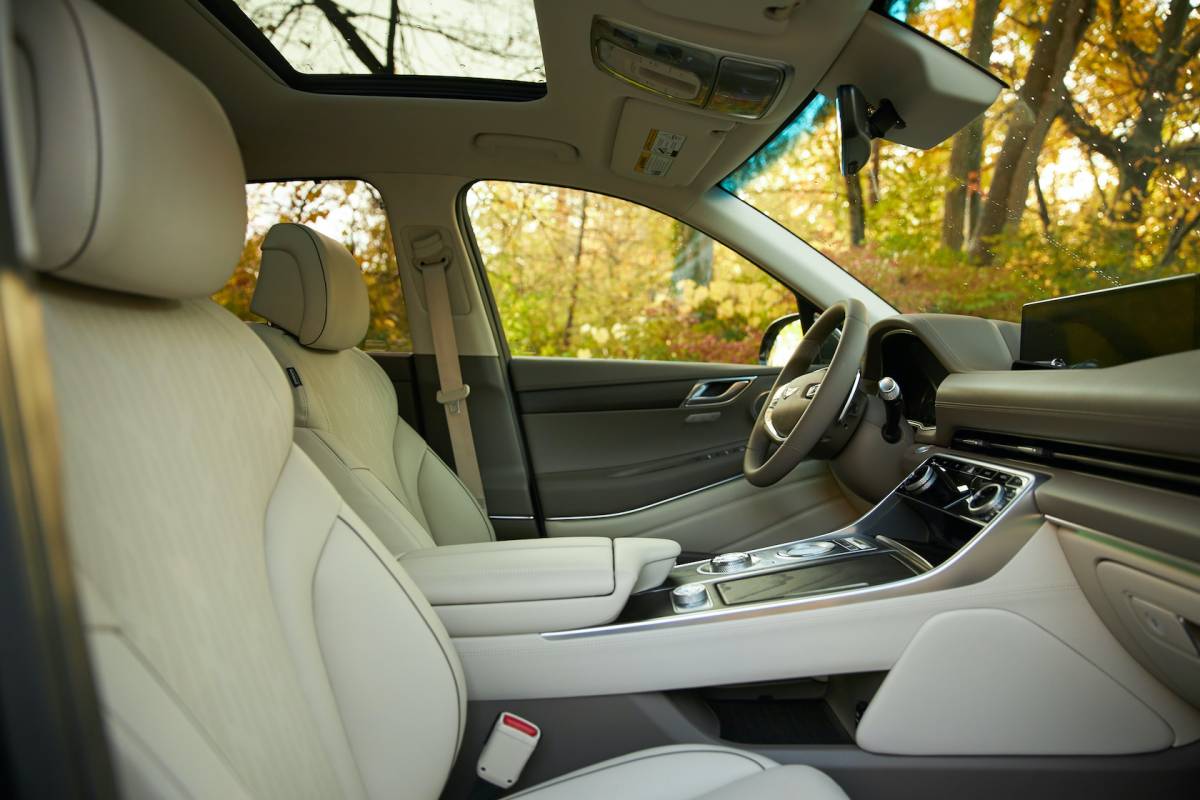 The thing about luxury cars that some automakers struggle with is that they’re not just a long list of specifications and gadgets, it’s how you put all that together that truly counts. Without that, there’s no sense of cohesion, of identity. It’s something the German car companies figured out long ago, but a challenge new would-be luxury competitors still fall short in. You can have nice leather and wood, and all the toys an S-Class or a 7 Series lists on the order form, but that’s only half of “present and correct.”

The original G90 struggled there a little – fancy features aplenty, but feeling like they’d all just been stuck together – but the GV80 shows Genesis has figured out the score. Yes, there are all the table-stakes for modern luxury, but they feel connected and intentional. 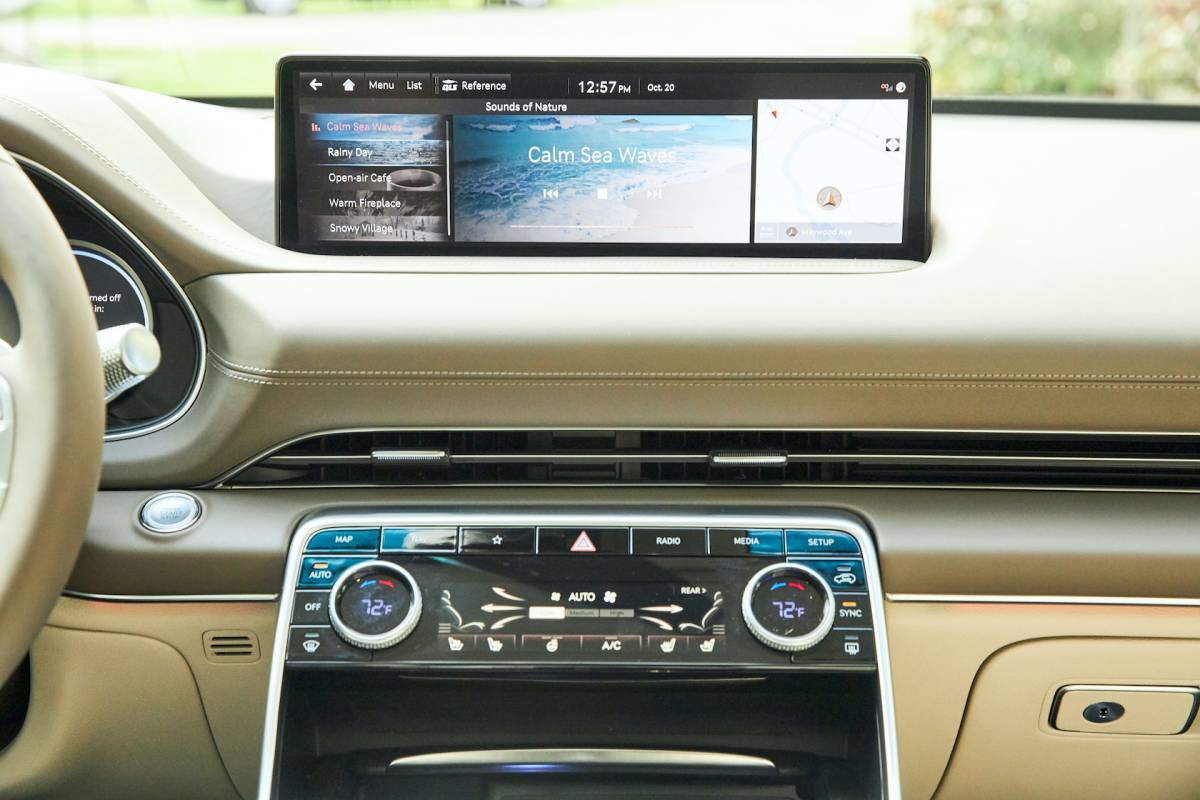 The dashboard is a wide swathe of open-pore wood, metal, and – on higher trims – leather. Atop it is a 14.5-inch touchscreen, a wider-than-widescreen panel running at 2560 x 720 resolution. The driver gets another sizable LCD and an analog speedo, though the top trim swaps that for a fully-digital 12.3-inch 3D cluster, and a 12-inch head-up display.

Cabin comfort controls are handled by a set of dedicated knobs and touch-sensitive buttons with a display of their own; you can swipe across the interface for fan or temperature adjustment. In the center console there’s Genesis’ multimedia controller, a milky bowl of glass surrounded by a textured metal wheel. You can scroll that wheel, press the controller like a 4-way pad, and sketch out characters for address entry on the glass surface. 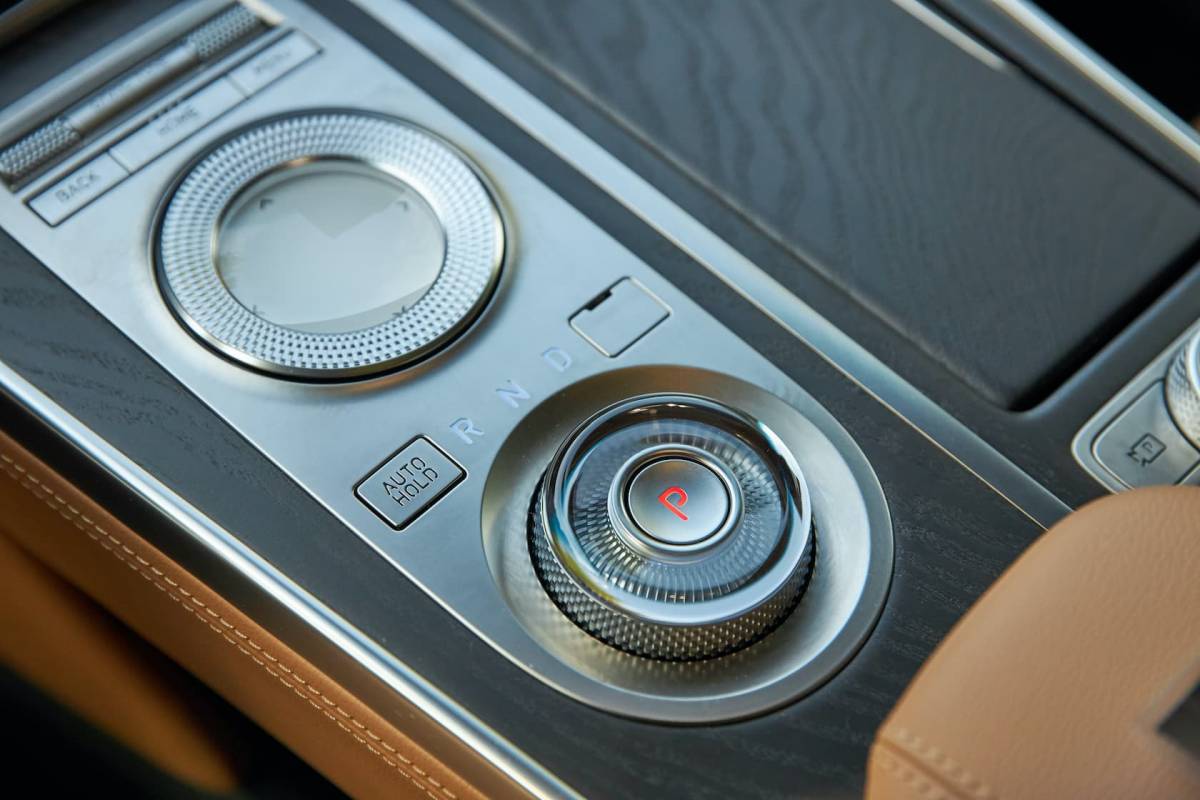 Another knurled knob – glowing according to drive mode – takes care of the transmission, while another, smaller dial flicks between drive modes. Two more dials, slightly too recessed for my liking, handle volume, mute, and channel scrolling, while other buttons address things like auto-park.

The vast majority of it looks, and feels, stupendous. Whether it’s the intentional minimalism of Genesis’ infotainment idle screen, or the detailing paid to each control stalk or steering wheel switch, or the crisp metal of the standard paddle-shifters, there’s a thoughtfulness most other luxury upstarts struggle with. I’m not entirely convinced by the rugby-ball-esque steering wheel’s shape, but it still feels premium. 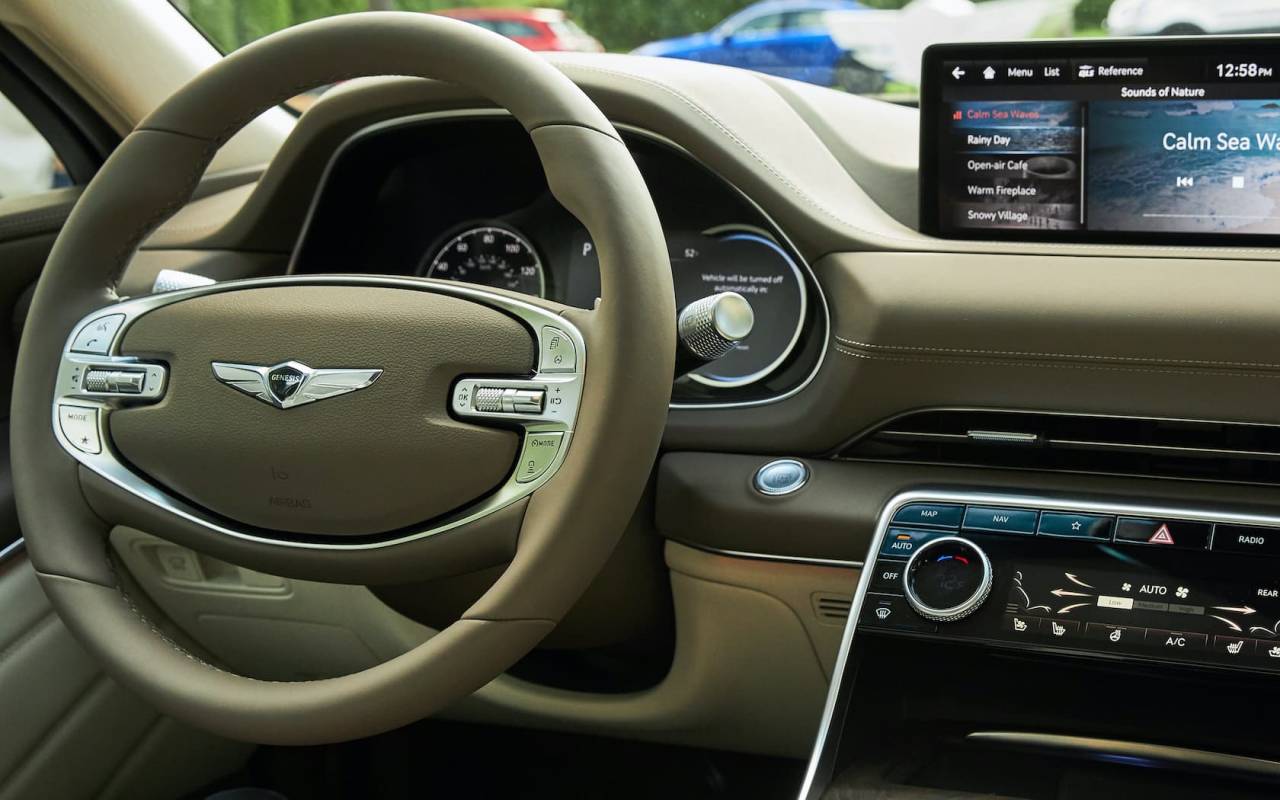 GV80 buyers get three years subscription to Genesis Connected Services, which helps power the cloud-connected navigation and voice recognition, Surround Video Image Capture which sends parking lot shots to the smartphone app, and the ability to pipe navigation destinations to the SUV from your phone. It’ll be $10/month after that, but Genesis says that the core voice control will still work without it. Voice commands are triggered by a button on the steering wheel, rather than a spoken wake-word.

You can use your phone as a digital key, tapping NFC and Bluetooth to unlock and start the GV80, or send virtual guest keys to others. That can be for as short as a few hours, or up to a year, and to either drive or simply access the SUV. Only on Android, though; Genesis isn’t onboard with Apple’s iPhone as a Key system. It’s not the only tech oddity: there’s only wired Apple CarPlay or Android Auto, not wireless, and while there’s OTA update support for navigation and basic infotainment upgrades, it won’t let Genesis do the sort of big feature updates that we’ve seen other automakers implement. 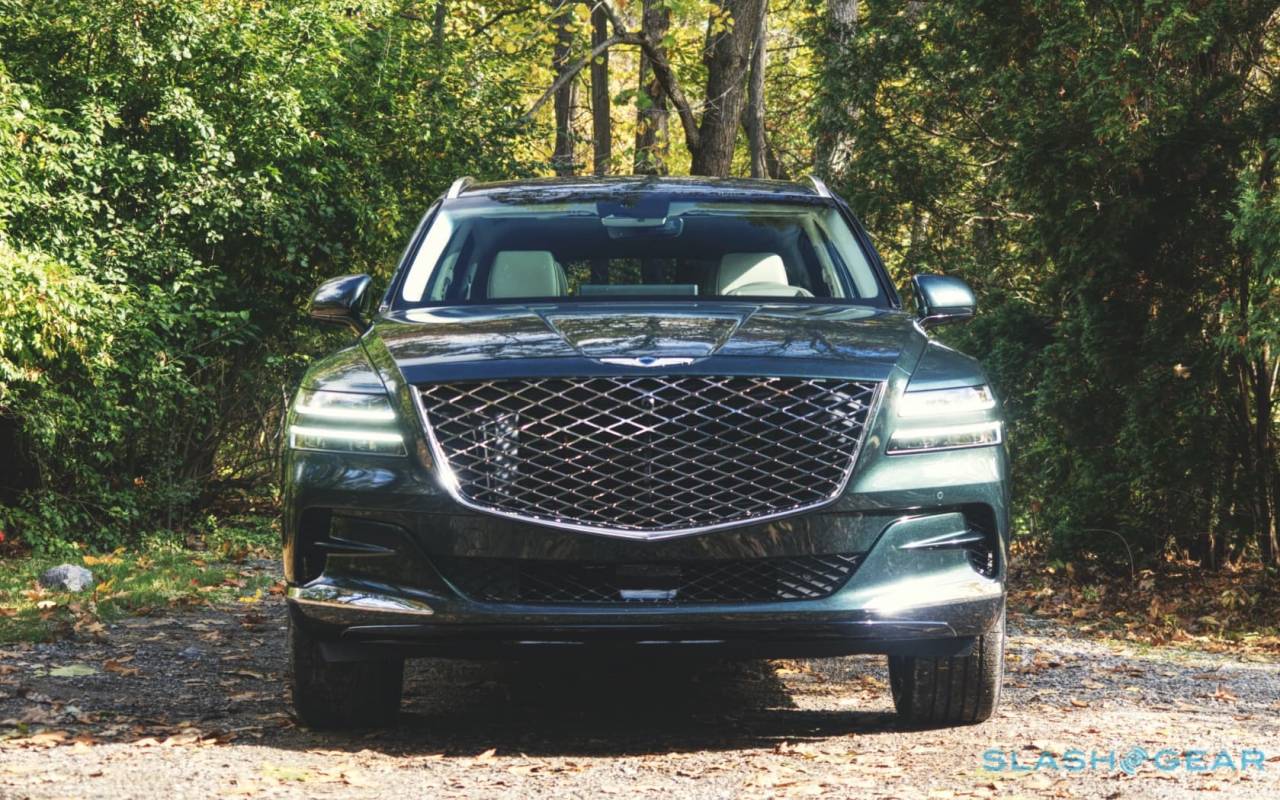 The 3D cluster on the 3.5T AWD Prestige relies on an IR eye-tracking camera to generate the impression of three-dimensional gauges for the driver. It’s neat, but since it depends on showing half the 12.3-inch panel’s pixels to each eye, the graphics get noticeably blockier in the process. Turn it off, and things are a lot crisper. That top trim also gets a new active noise cancellation system, using four cabin microphones and accelerometers in each wheel to counter grumbles from the road.

It wasn’t fitted to either of the two GV80 I tried – the 3.5T AWD Advanced+ and the 2.5T RWD Prestige – but I didn’t really miss it. Genesis’ base engine is a 2.5-liter turbocharged inline-4 with 300 horsepower and 311 lb-ft of torque, offered with either RWD or AWD. The upgrade – and the configuration Genesis expects 65-percent or so of initial buyers to go for – is a 3.5-liter V6 twin-turbo, with 375 hp and 391 lb-ft. Both are paired with an 8-speed automatic. 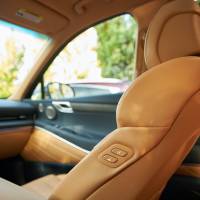 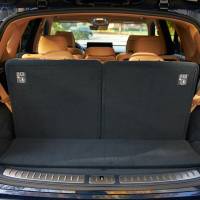 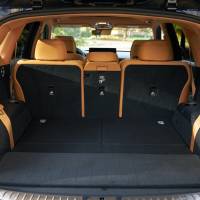 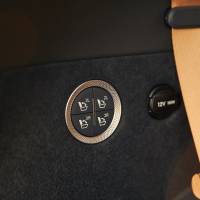 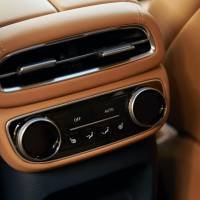 Entry-level GV80 owners won’t be left miserable. The 2.5-liter turbo has solid pickup and peak torque arrives from 1,650 rpm to 4,000 rpm; push harder, and Genesis’ transmission will happily kick down to keep you in that band, though it starts to lose a little aural composure. Twisty roads clearly aren’t the GV80’s preferred playground, but the ride is composed.

The V6 is definitely the engine to go for, though. The extra power isn’t excessive – the AMG and BMW M teams have nothing to worry about yet – but its smooth delivery suits the GV80 nicely. Again, this is no backroad racer, though it’s fast enough and the pick-up is swift. The AWD defaults to rear-bias, but can shuffle up to 50-percent of the power to the front wheels, while an electronic limited-slip differential on the top-trim can push up to 100-percent of the available power to the left or right rear wheel, traction needs depending. 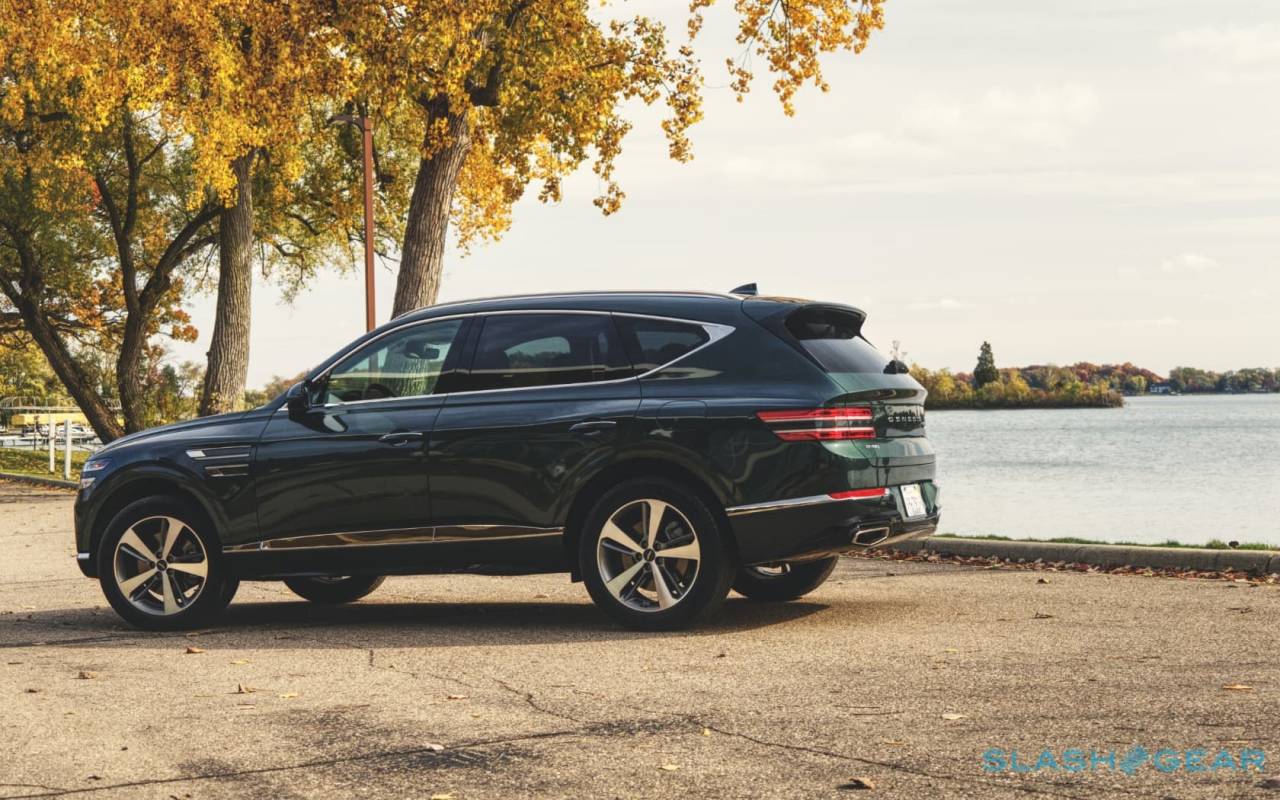 The result is more reassuringly surefooted than sporting. There’s a dedicated Sport mode, of course, the GV80 holding the lower gears among other changes. Genesis’ electronically controlled suspension uses a front-facing camera to map the road surface ahead and tweak its settings proactively, too.

Highway Driving Assistant 2 is standard across the board, Genesis’ system combining adaptive cruise and lane-keeping. In theory it’ll learn from your everyday driving to tweak its settings for following distance, reaction speed, and how aggressively you accelerate, though I didn’t have long enough behind the wheel for that to happen. It can also change lanes automatically when you tap the indicator, and add a little extra space between you and large adjacent vehicles, though I found the GV80 and I disagreed on how far left in the lane I should be positioned most of the time.

Some potential buyers would like to see a V8, I’m sure, and I was disappointed that Genesis didn’t have a full-electric or even just a hybrid version. The V6 is rated for 18 mpg city, 23 mpg highway, and 20 mpg combined. 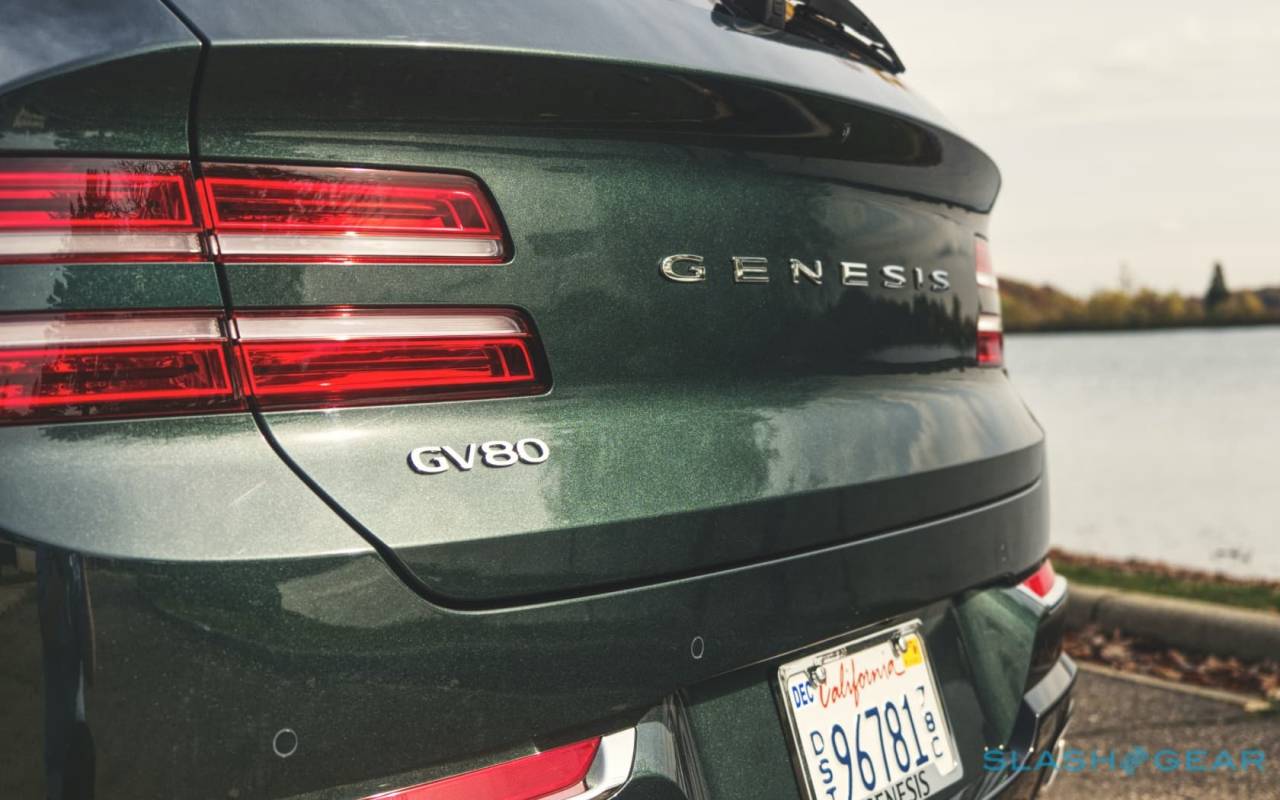 As for pricing and packaging, things kick off at $48,900 (plus $1,025 destination) for the GV80 2.5T RWD Standard. That has leatherette seats with heating up front, 19-inch wheels, and piano black gloss trim. Adding AWD to that is $5,750, but also adds a panoramic roof, ventilated front seats and a heated steering wheel, wireless phone charging, digital key, matte wood, and other niceties. Leather arrives in the $57,050 2.5T RWD Prestige or the $59,000 2.5T AWD Advanced, both of which have 20-inch wheels, a 360-degree camera, blind-spot view monitor, and remote smart parking assist. The AWD car also gets an incredible 21-speaker Lexicon audio system, with two subs under the front seats and 1,050 watts to play with. 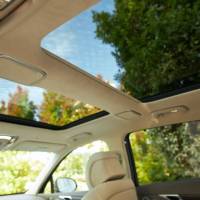 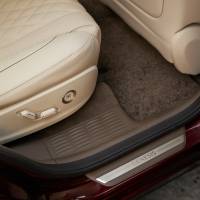 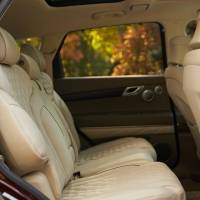 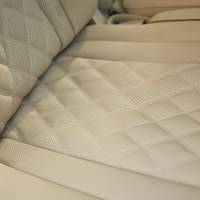 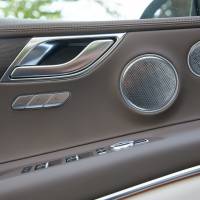 The V6 starts at $59,150 for the 3.5T AWD, with electronically-controlled suspension and 20-inch wheels. $64,350 gets you the Advanced, with the Lexicon audio, surround and blind-spot view systems, remote smart parking assist, leather seats, 3-zone climate control, the HUD, and fancier Ergo Motion Seats. A $70,950 Prestige is basically the maxed-out GV80, with the e-LSD, Nappa leather, 3D cluster, power door closure, and other treats.

Oddly, only one configuration – the GV80 3.5T AWD Advanced+ at $65,050 – will offer the third row seating. The reality, though, is that the seats are small and both head and legroom back there is tight; it’s just not as plush as the treatment you get in the first and second rows. Figure on occasional transport for small kids, rather than anything more permanent. They eat into cargo space, too, cutting the normal 33.9 cubic feet to 11.6 when they’ve powered up into place. Drop everything bar the first row, and you get 84 cu-ft to play with. 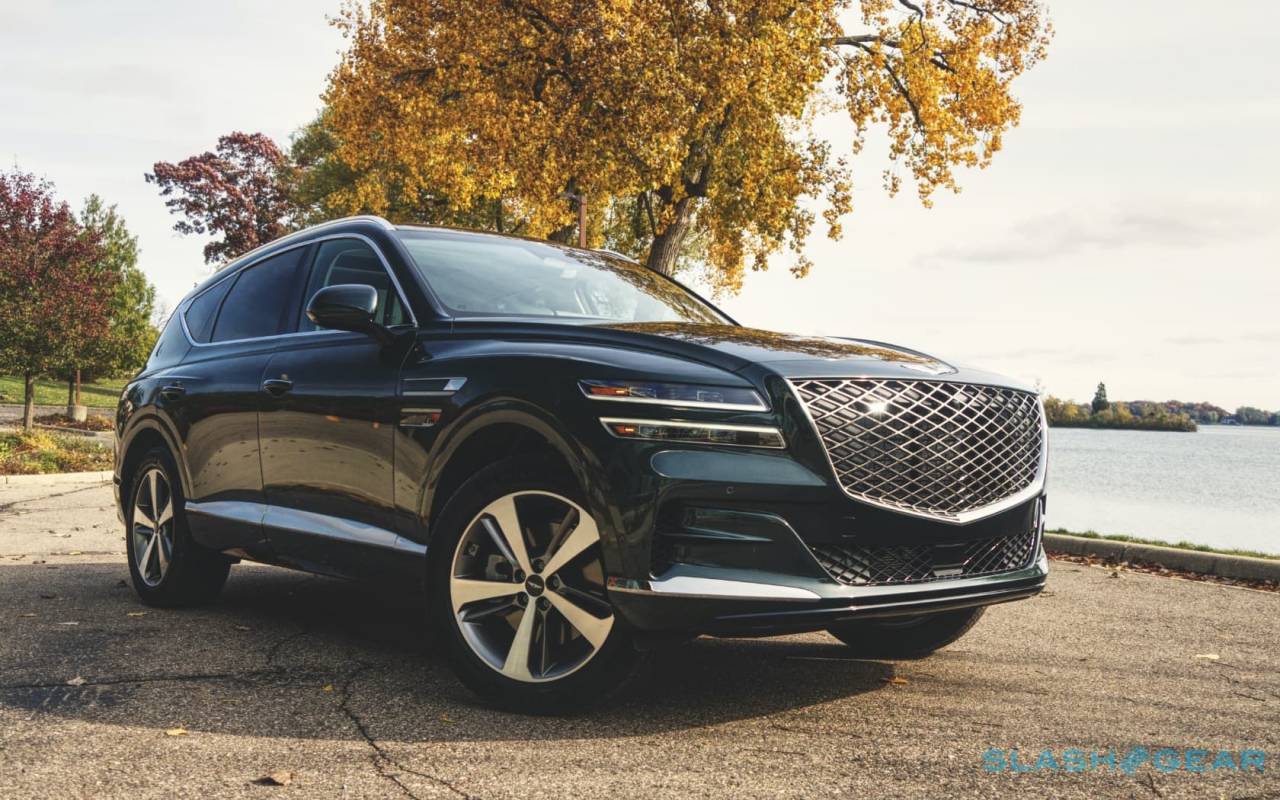 Genesis’ problem until now has been making good cars in categories people just aren’t buying. The worst you could say about its trio of sedans is that they’re “quietly competent”; at their best, they’re positively engaging. If car-shoppers were actually buying anything other than SUVs and trucks right now, they – and Genesis in general – would have made a far bigger splash.

The GV80 rights that imbalance. It may only be a single model, but it’s a category-shaking example of what a modern luxury SUV looks and feels like. Competitive where it needs to be, distinct where other would-be luxe contenders opted for homogeneity, and above all confident in what it offers. If even just a small fraction of the heads it turns add up to sales, Genesis is on to a winner.