Acura promised something big from its new, three-row SUV, and the 2022 Acura MDX certainly isn’t holding back on style and technology. Slotting in as the automaker’s flagship model, the striking SUV – barely-tweaked from the MDX Prototype – is the model’s fourth generation, and borrows liberally from the well-received Acura Precision Concept.

That means a big, oversized Diamond Pentagon grille, flanked by four-element JewelEye LED headlamps with an integrated daytime running light. It’s at the front of a longer hood, with sharper sculpt-lines, and atop a bolder lower-fascia.

The wheelbase has been extended by 2.8-inches, and the 2022 MDX’s stance is 1.4-inches wider too. The dash-to-axle ratio – the distance between the front axle and the dashboard – is almost 6-inches longer than on the old MDX, too, helping leave the SUV looking more purposeful and aggressive in profile. Regular MDX get chrome exterior trim, while MDX A-Spec cars swap that for gloss black. 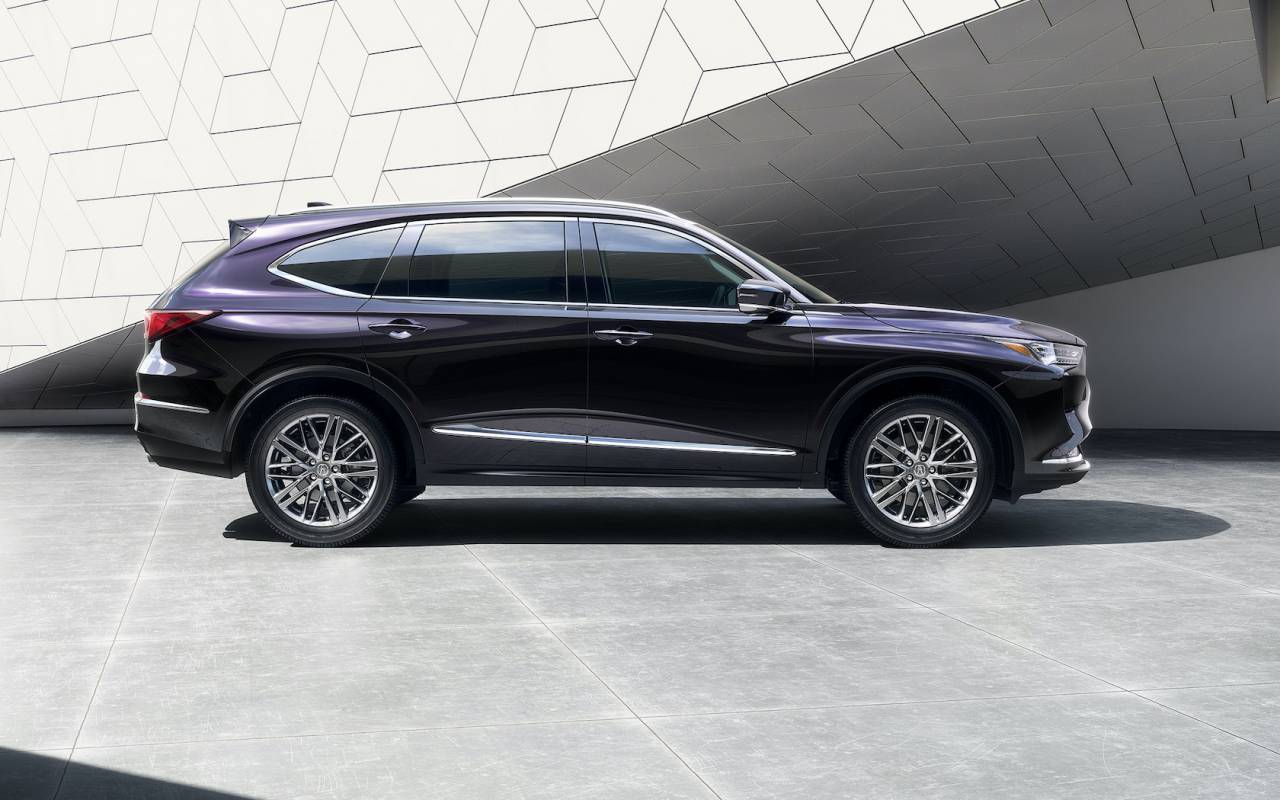 As well as two non-metallic paint finishes, there’ll be six premium colors with Phantom Violet Pearl and Liquid Carbon Metallic joining the palette. The MDX A-Spec can be had in exclusive Apex Blue Pearl, combined with its gloss black accents, darkened headlights and taillights, and Shark-Gray wheels.

The 2022 MDX introduces an all-new platform

Acura’s changes are more than just sheet-metal deep. Underneath, the 2022 MDX debuts a brand new light truck platform, with double-wishbone front suspension for the first time, and a new multilink rear suspension system. The automaker says it’s more rigid than before, while the new suspension system should be more suited to aggressive driving. 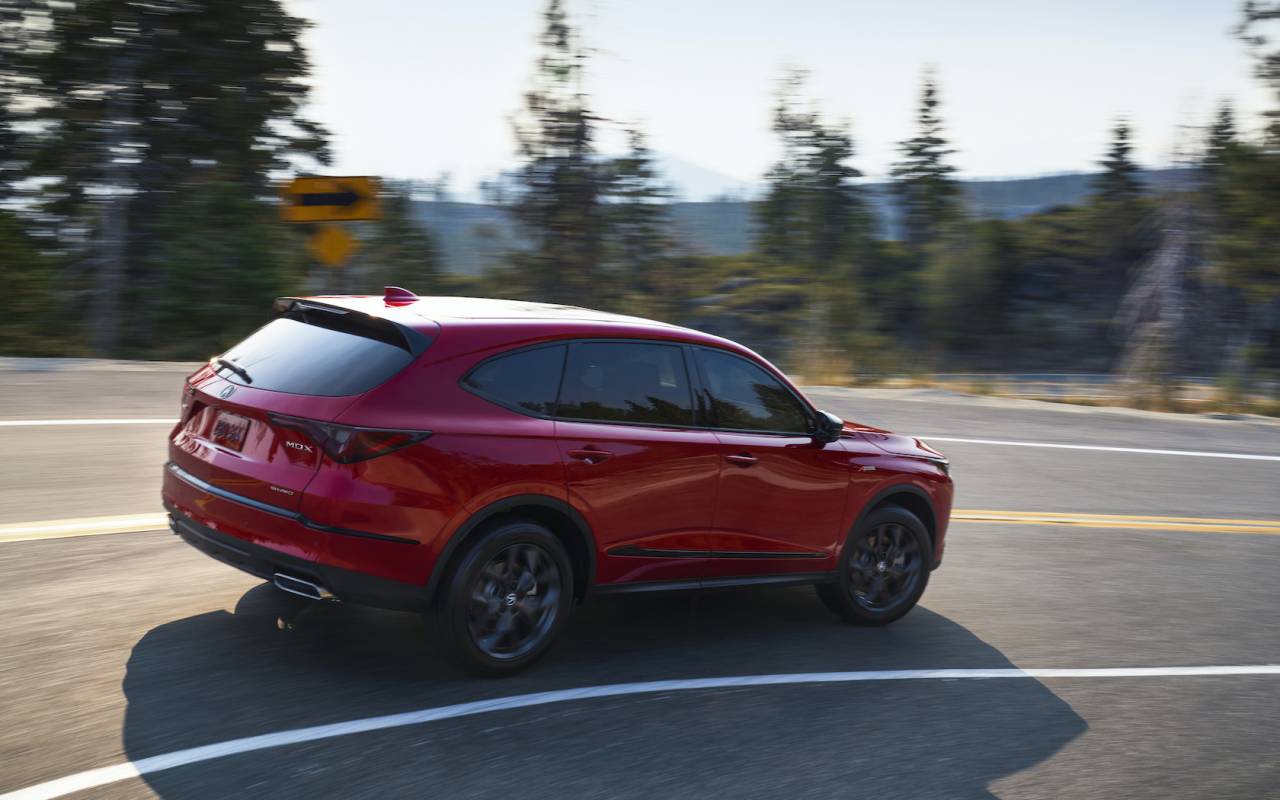 It’s paired with a new, belt driven electric power steering system, with a variable gear ratio. The brakes have been upgraded, too, with larger and thicker front brake rotors, and a new electric brake booster. Acura says drivers can expect an almost 18-percent improvement in heat capacity, too, along with shorter stopping distances when the Collision Mitigation Braking System weighs in during emergencies.

They’re packaged with new wheels, 19-inches as standard and with 20-inch versions optional. New in-wheel resonators promise to help cut road noise on the larger wheel package, while both get a new exclusive tire.

At launch, one 2022 MDX engine and optional SH-AWD

Initially, Acura will have a single engine option for the 2022 MDX. The 3.5-liter i-VTEC V6 packs 290 horsepower and 267 lb-ft of torque, and is paired with a 10-speed automatic transmission with paddle-shifters. 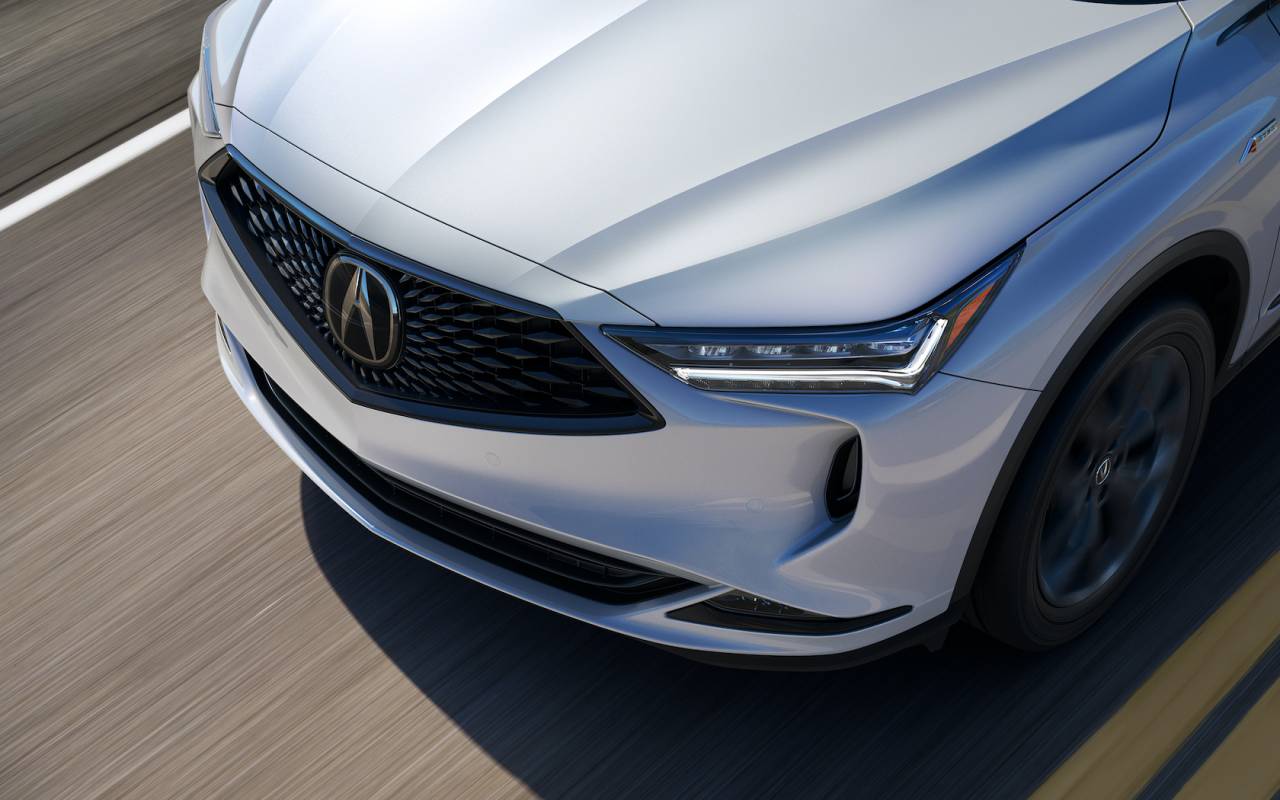 As standard, the new MDX will be front-wheel drive. Acura will offer its Super Handling All-Wheel Drive (SH-AWD). That can push up to 70-percent of the torque to the rear axle, and divide up to 100-percent of it from the left to right rear wheels. Acura says that the system is now 30-percent quicker at moving torque front to rear than SH-AWD was in the old MDX.

There are five drive modes – Snow, Comfort, Normal, Sport, and the driver-customized Individual – while Technology Package cars get IconicDrive interior lighting. That has 27 different LED lighting schemes, according to different drive modes and iconic roads and race circuits.

All trims get AcuraWatch, with adaptive cruise control with low-speed follow, updated road departure mitigation, and Traffic Jam Assist plus Traffic Sign Recognition. Traffic Jam Assists will keep the MDX in lane, and keep pace with the vehicle ahead, during congestion. There’s also Pedestrian Detection and a new driver-attention monitor. 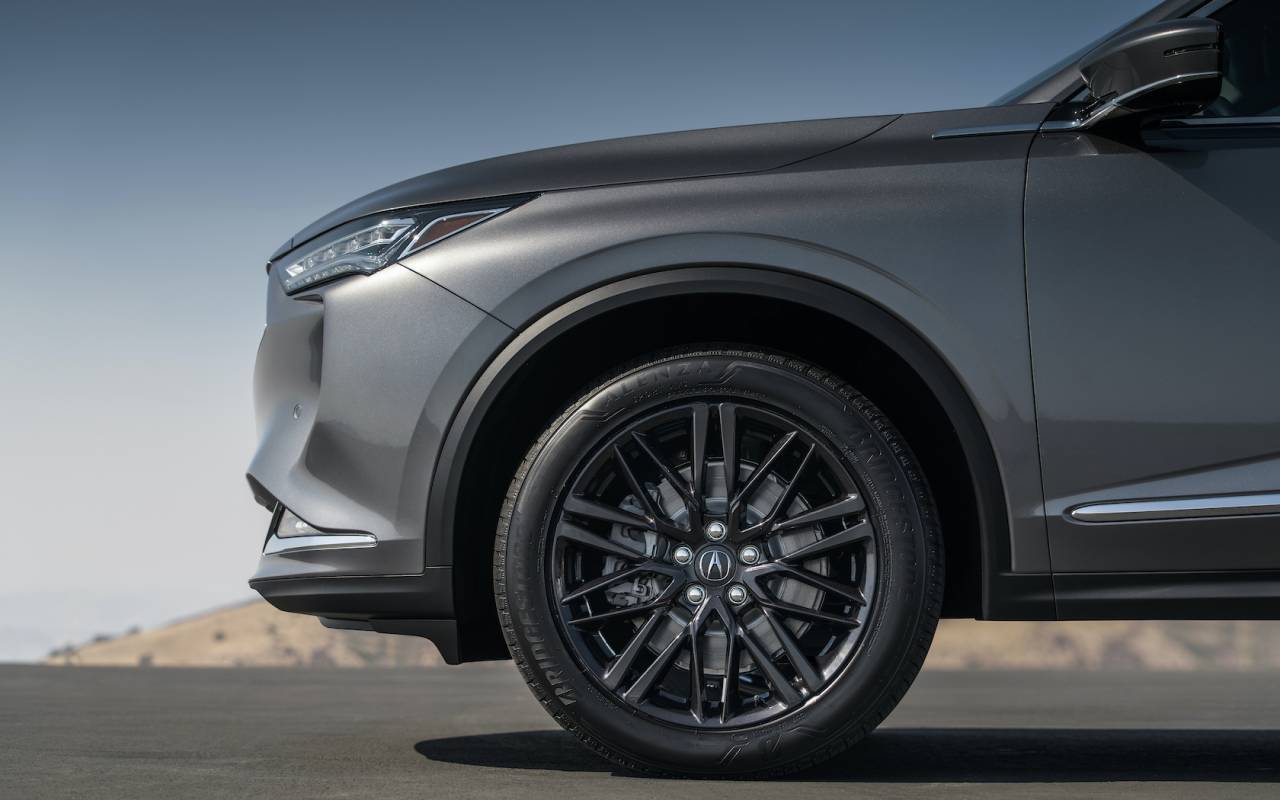 Low Speed Braking Control is standard on the Technology Package and above, tapping the parking sensors to help avoid low-speed collisions such as in parking lots. Inside, there’s the new multi-section front passenger airbag. Overall, Acura says it’s targeting five stars on the NHTSA’s safety tests, and Top Safety Pick+ on the IIHS’ tests.

Taking the 2022 MDX and nudging it even further into flagship status, the MDX Type S will follow on come late summer 2021. It’ll be the first time Acura has put the Type S name on an SUV, and so it’s taking no risks with making sure the model lives up to it. 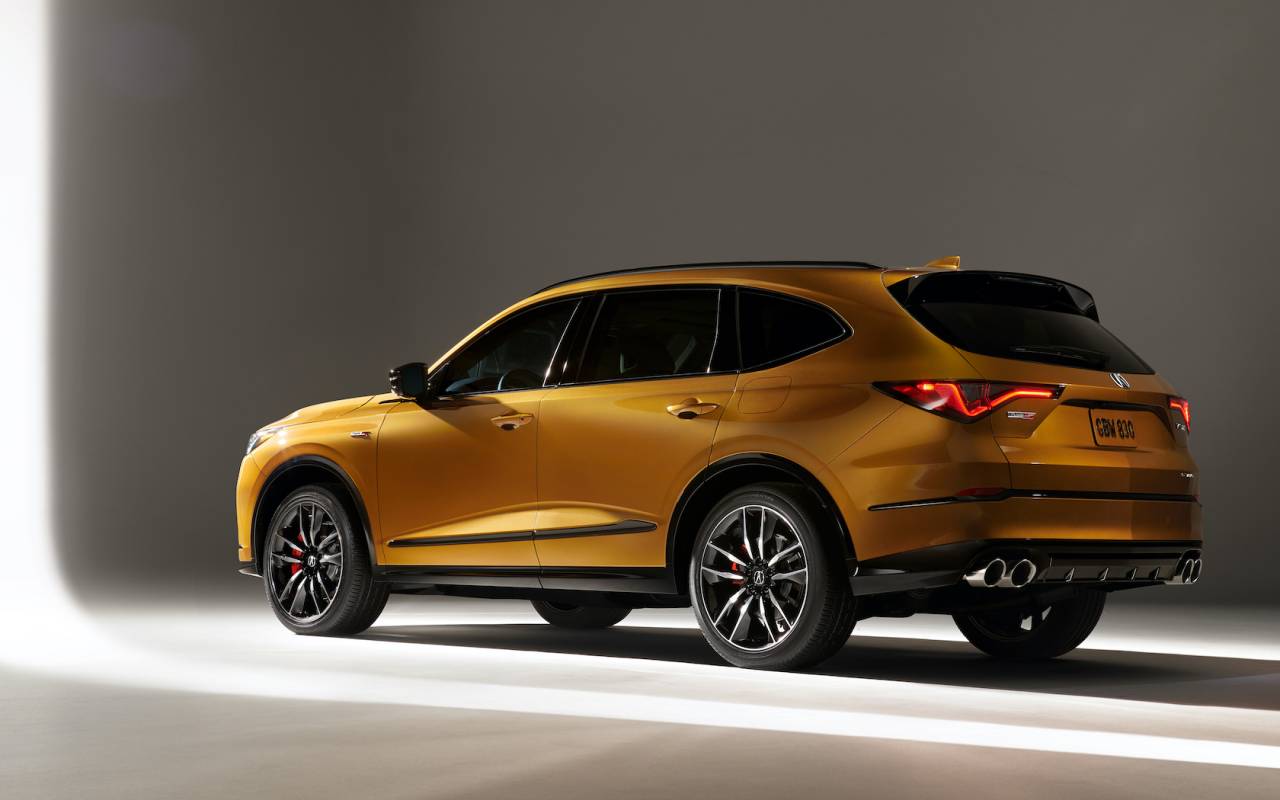 Outside, there’ll be a new aesthetic with a diamond mesh grill, quad tailpipes, and gloss black trim. 21-inch wheels with 275-series tires will be standard, while the brakes will be larger and use 4-piston Brembo front calipers. 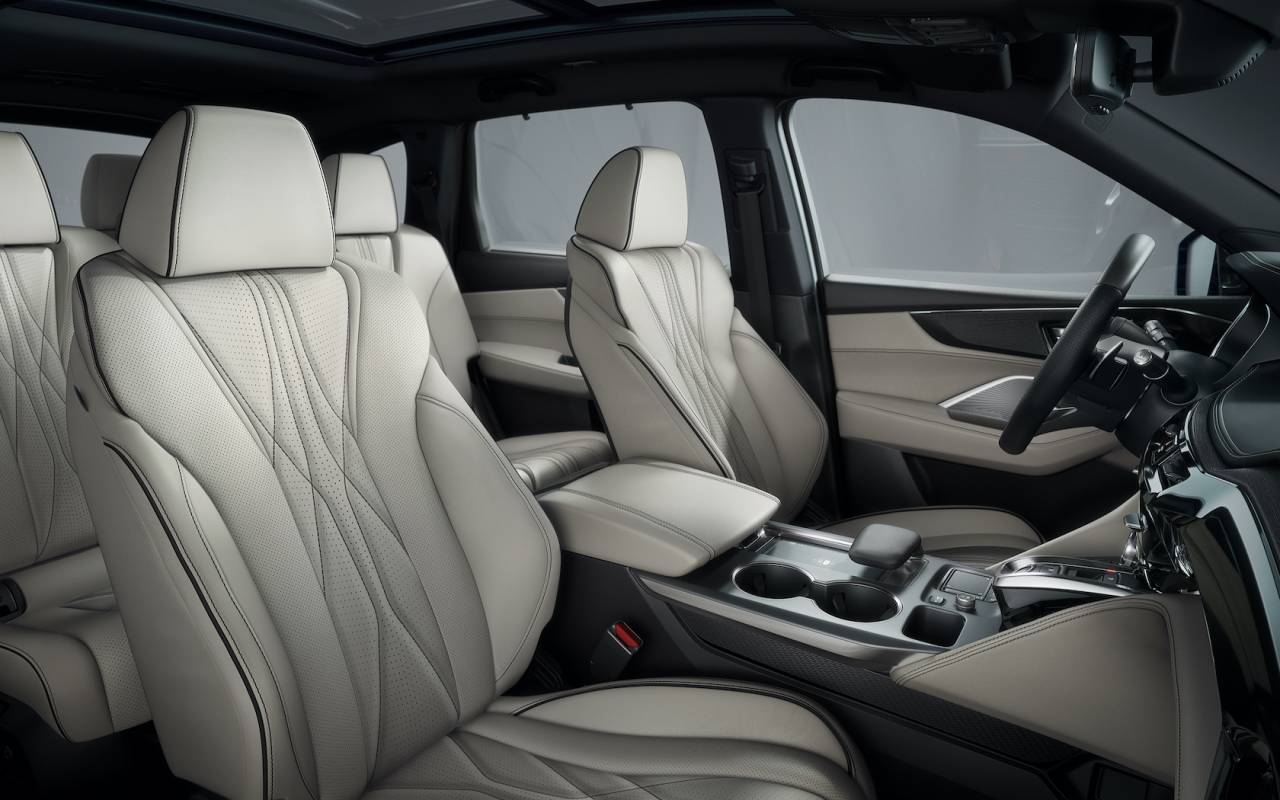 Power will come courtesy of the new 3.0-liter turbocharged DOHC V6, with an estimated 355 horsepower and 354 lb-ft of torque. SH-AWD will, of course, be standard. Inside, Acura is promising optional 9-mode massaging front seats with curvilinear stitching, along with special Type S trims and colors. A Signature Edition ELS STUDIO 3D premium audio system will pack 1,000+ watts of power across 22 channels driving a total of 25 speakers.

Inside, the 2022 MDX adds space to its three rows

As you’d expect, there are three rows and seating for up to 7 inside. However for the fourth-gen MDX, Acura has cranked up the space, cosseting, and tech. Six color schemes will be offered, including Ebony, Parchment, Graystone, and Espresso on the standard MDX, and Ebony or Red leather with black Ultrasuede inserts on the A-Spec. 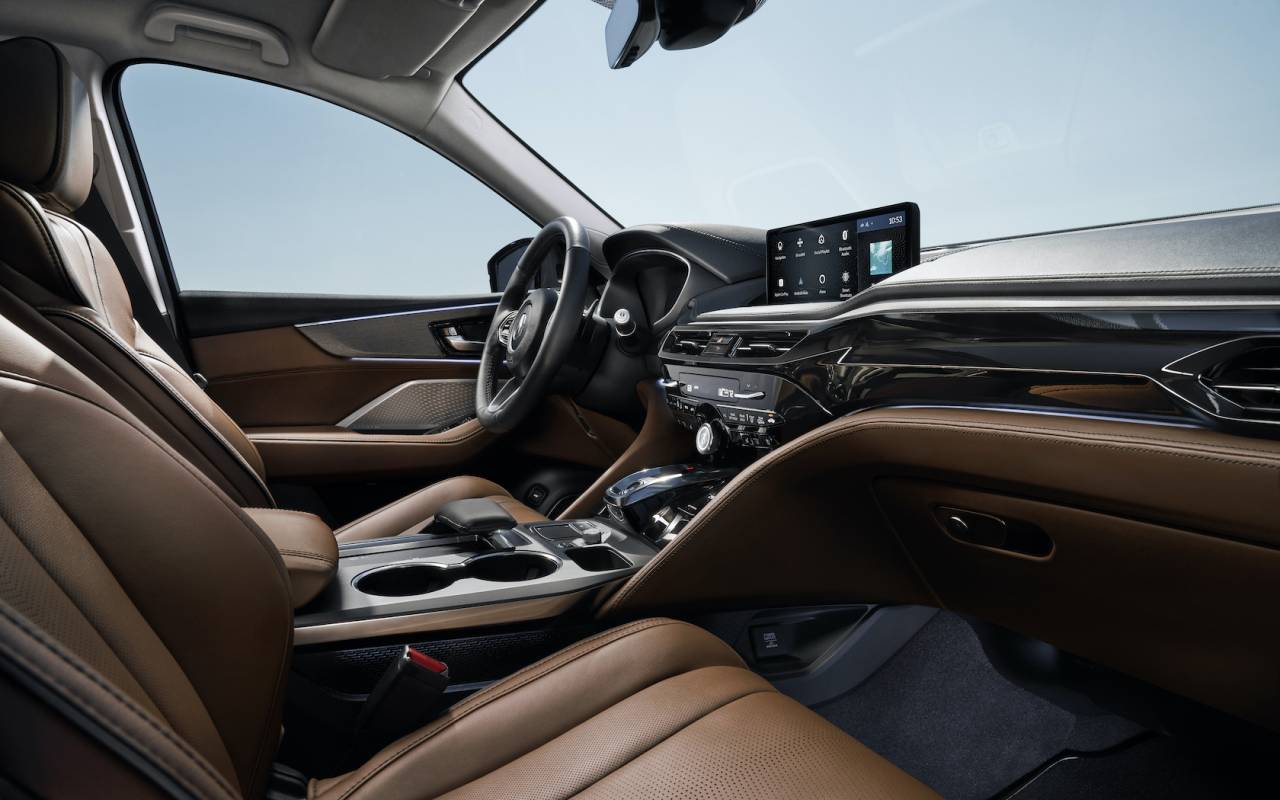 Regardless of color scheme, there’s real open-pore wood, brushed aluminum, and Milano leather, while the dashboard can be optionally hand-wrapped and top-stitched. Those up front get sport seats with 12-way adjustment, three-way seat heating, and three-position memory as standard; MDX A-Spec cars add ventilation, while the Advance Package throws in power-adjusting side bolsters and thigh extensions for 16-way adjustment. 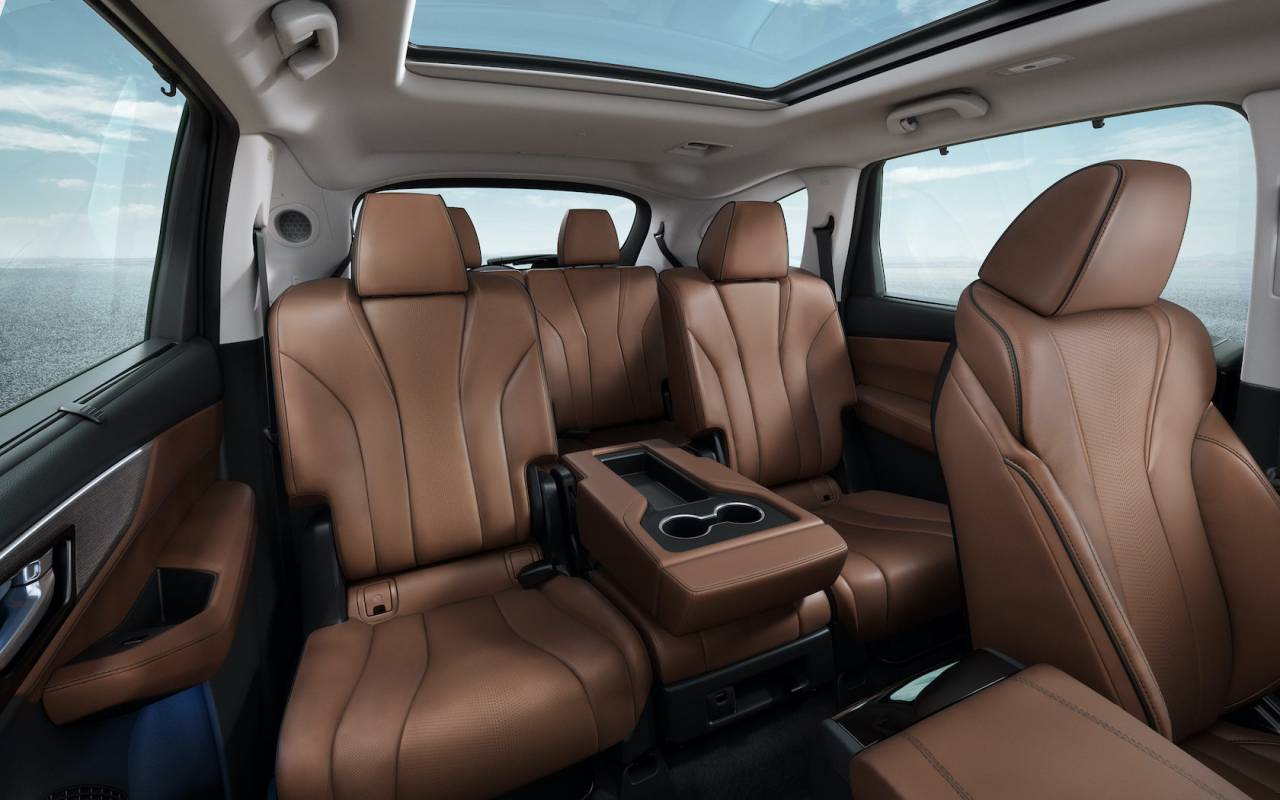 The second-row seating has a new, multi-function removable middle seat. That can be left in place for maximum capacity, dropped down to form an armrest between the two outer chairs, or removed completely for pass-through access. The third-row gets 0.4-inches more headroom, 2.4-inches more legroom, and a 2-inch higher seating position; those seated back there also get USB charging ports of their own, and all 2022 MDX trims have a panoramic moonroof.

Cargo space, meanwhile, is now 16.3 cu-ft, or up to 71.4 cu-ft with the second- and third-rows folded. The under-floor trunk cubbies have been enlarged, too, and can expand the total space to 18.1 cu-ft. 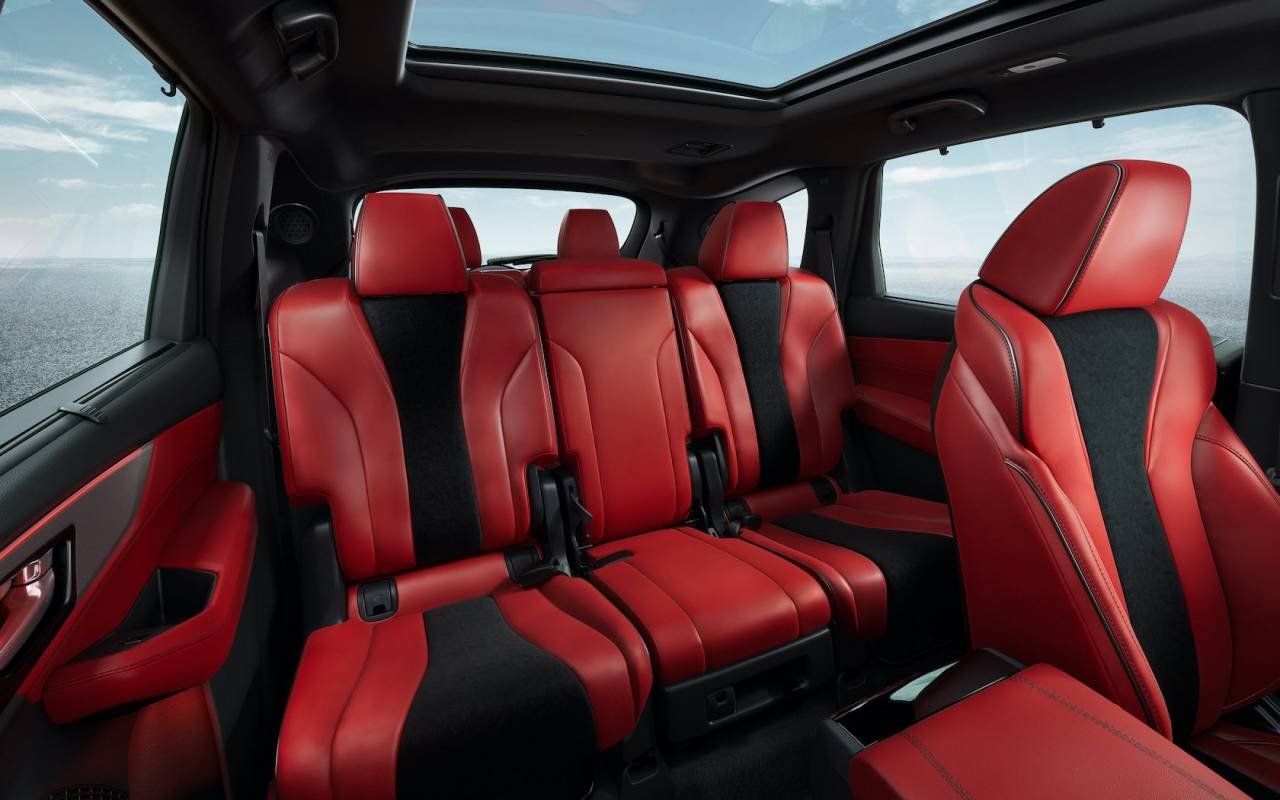 For tech, a comprehensive MDX upgrade

The driver gets a 12.3-inch digital cockpit, with two themes – Advanced and Crafted – along with an optional 10.5-inch color head-up display that’s part of the Advance Package. In the center console there’s a 12.3-inch Full HD infotainment screen, operated by Acura’s True Touchpad Interface. Like the new TLX, the 2022 MDX gets physical power, volume, and track-skip controls. 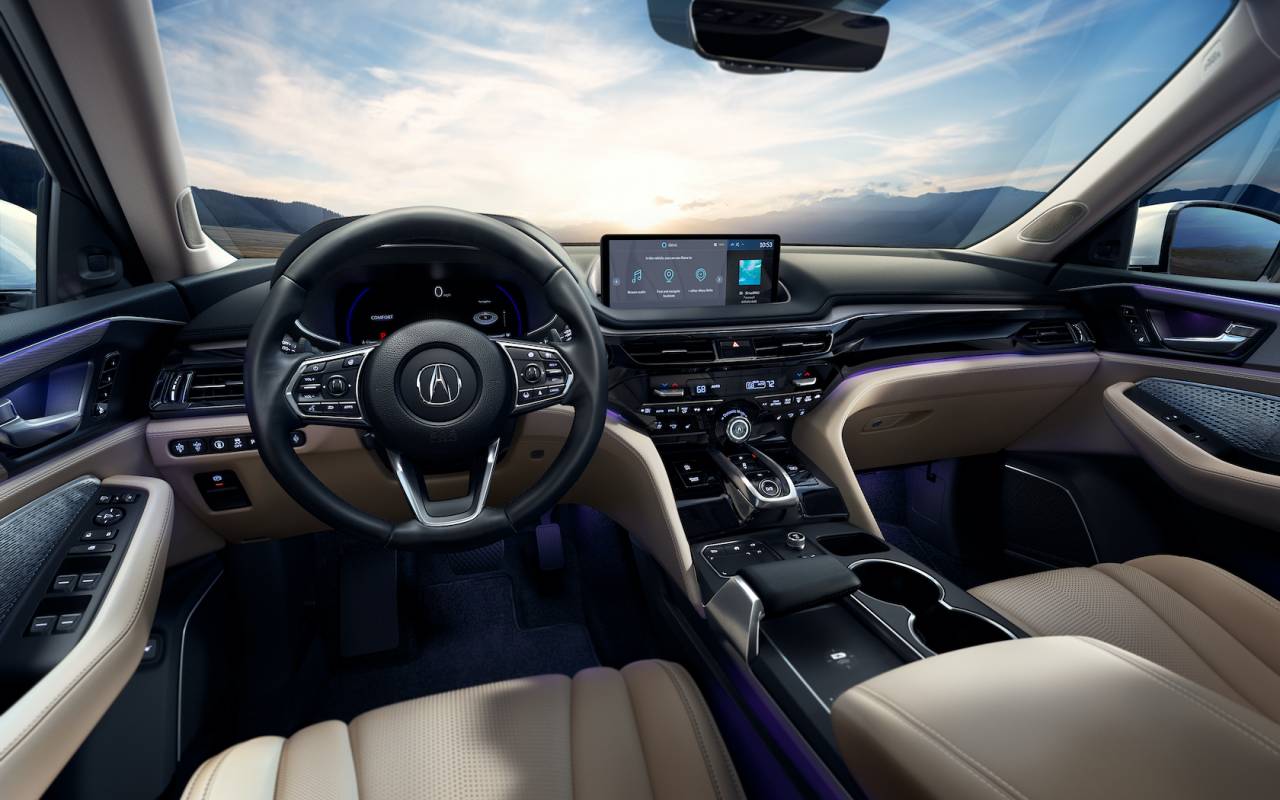 Base spec cars get a 9-speaker, 350 watt audio system, while the MDX Technology Package upgrades that to an ELS Studio system. That has 12 speakers – including a center dash driver and two ceiling-mounted drivers – with 550 watts. A-Spec and Advance Package cars get the ELS STUDIO 3D system, with 16 speakers, 710 watts, and 16 channels.

USB-C and USB-A charging ports are included, and there’s wireless Apple CarPlay and Android Auto support as standard. A 15W Qi wireless charging pad is standard, too, along with Amazon Alexa Built-In. 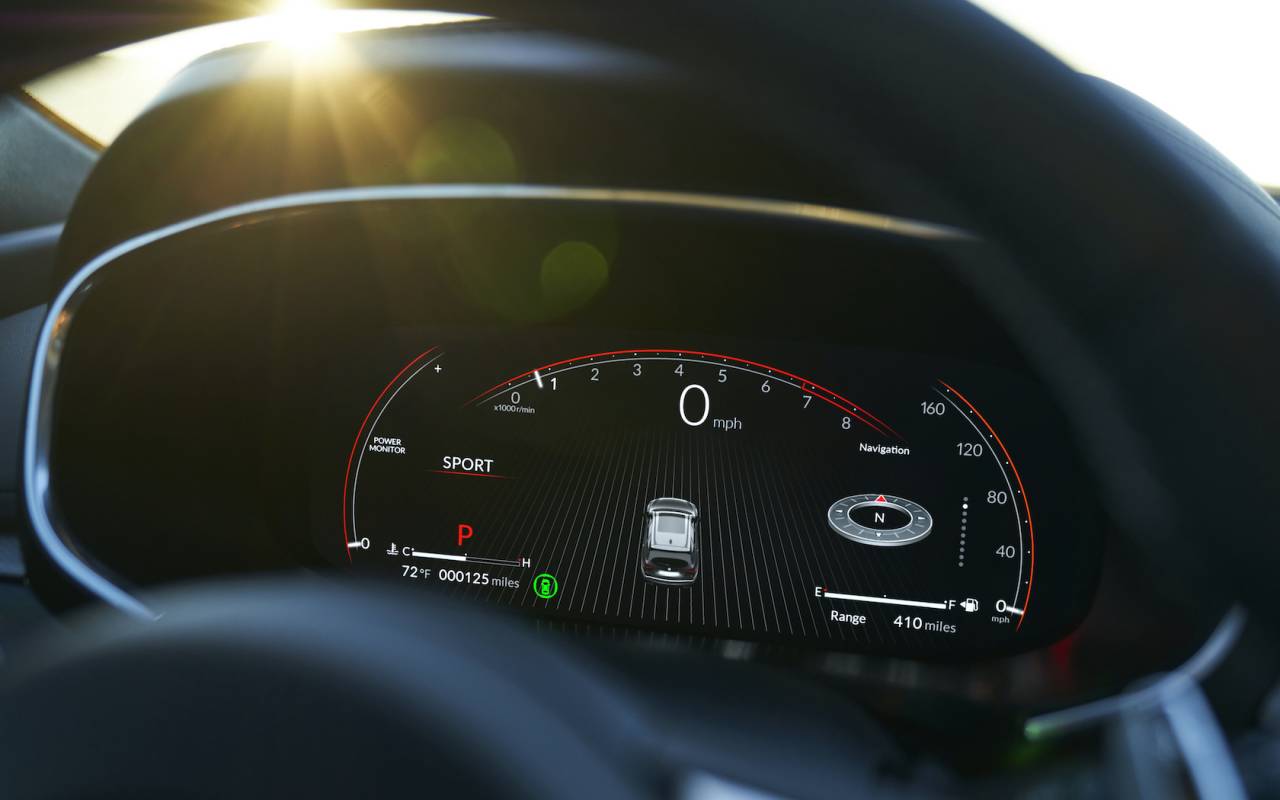 CabinControl is standard – meaning passengers, with the smartphone app, can control music, audio settings, rear climate controls, navigation, and the moonroof sunshade from their device – and A-Spec and Advance Package MDX get CabinTalk to amplify the voices of those in the front seats for those behind. AcuraLink, with an embedded 4G LTE modem and WiFi hotspot support is included as standard too. 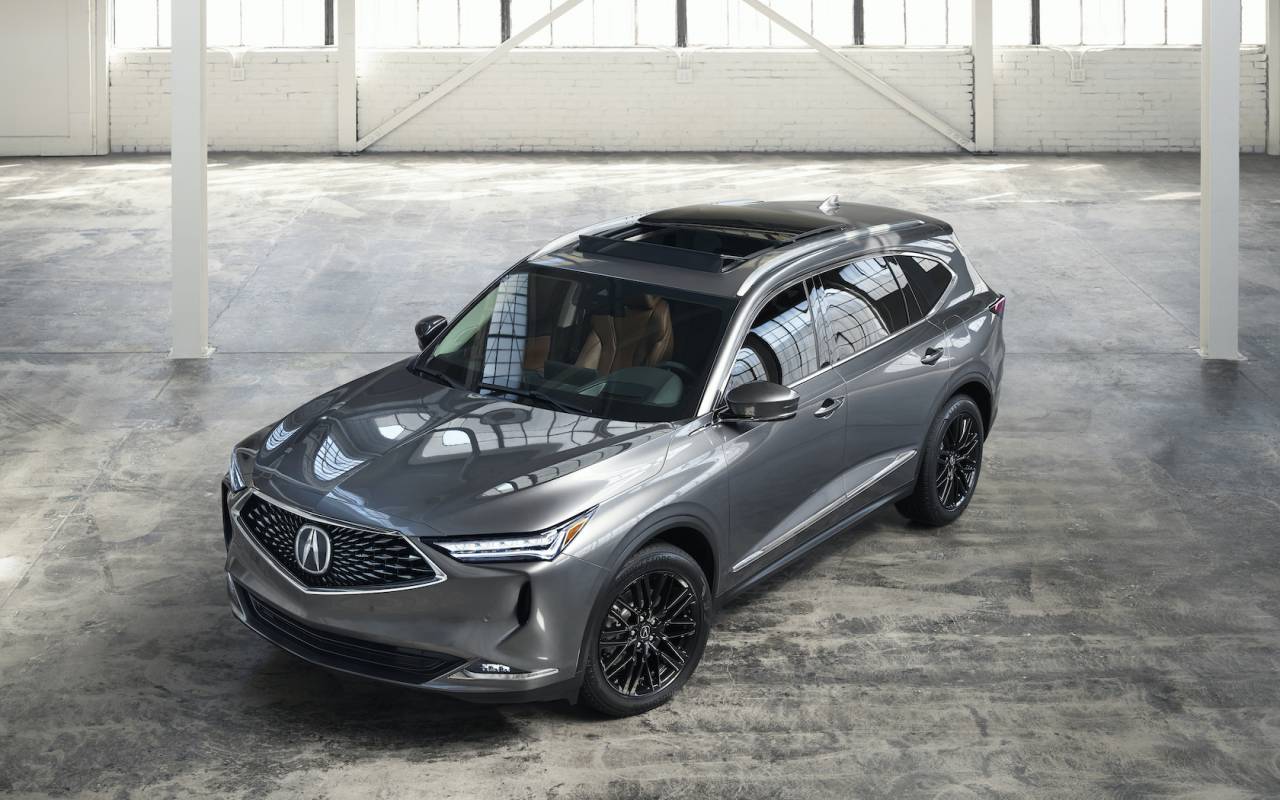 Acura says the new 2022 MDX will arrive in US dealerships from February 2, 2021. As for the MDX Type S, more details on that model will arrive closer to its on-sale date.