The limo has grown up, quite literally: where once the height of luxury was a long, sleek sedan, now it’s the elevated presence of a six-figure SUV which signifies you’ve really made it. Witness, then, the 2021 Mercedes-Maybach GLS 600 as it goes grille to grille with recent successes from Rolls-Royce, Bentley, and others, the German automaker leaning into its cosseting sub-brand in the hope of replicating the sporting successes of AMG.

As with Mercedes-AMG, the Maybach division doesn’t exactly concern itself with subtlety. The general recipe for aesthetics here is to embrace chrome, and then double-down on that. The GLS proportions are already oversized, and then Mercedes’ luxury arm adds a bolder grille, some borderline-OTT mesh in the lower fascia, and a spray of the double-M badging that nobody I asked could recognize without a little history lesson. 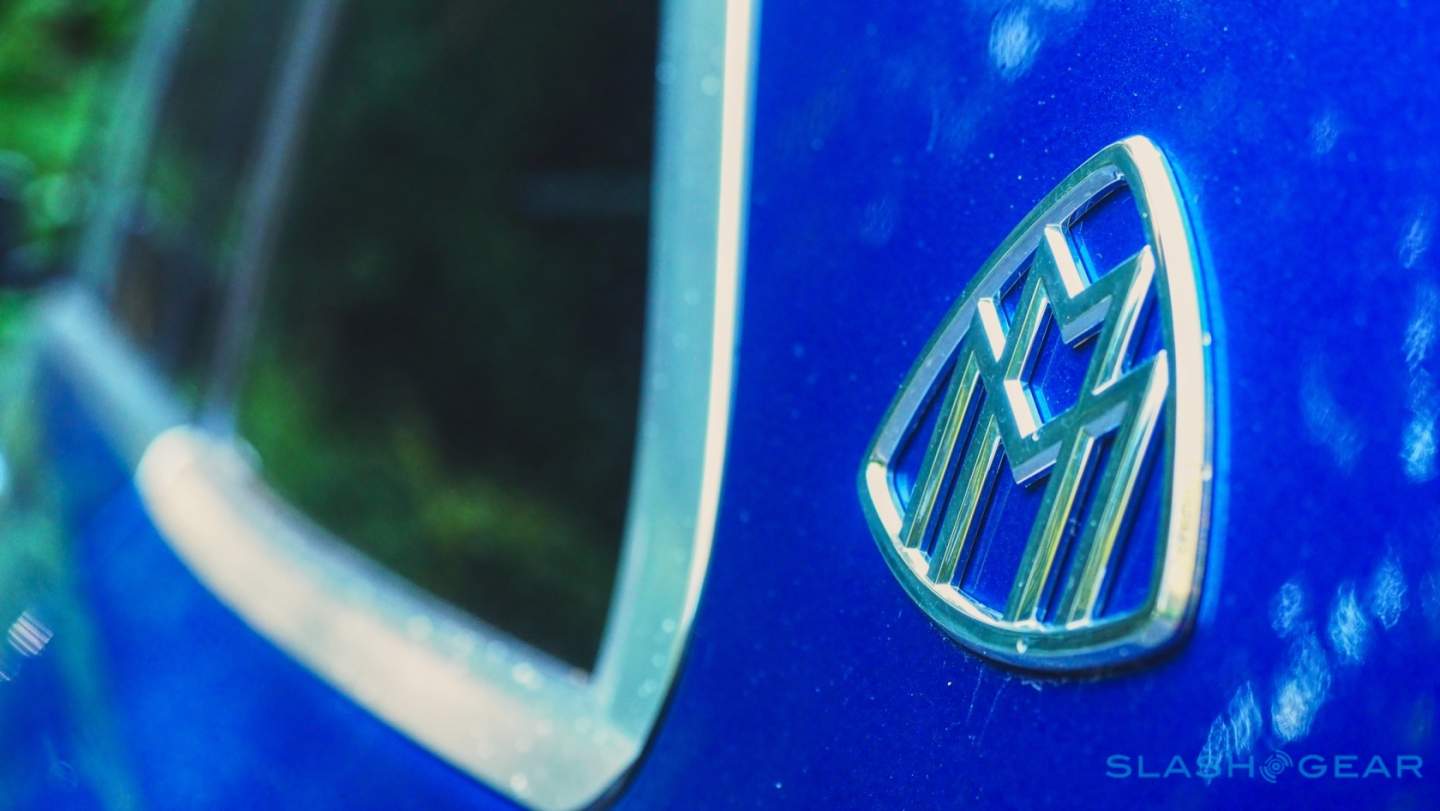 22-inch wheels – large by any measure – are standard. The 23-inch Maybach Multispoke Forged Wheels are a $5,500 option, though, and one I can’t help but approve of. Dual-tone paint is also available, and it’s surprising just how mild or melodramatic you can make your SUV depending on this combination of colors.

It seems a little ridiculous to be considering frugality when it comes to a vehicle quite as lavish as this one – I suspect few people considering adding the Maybach GLS to their garage will have budget concerns. However, in the grand scheme of excessive SUVs, Mercedes’ entrant is unexpectedly competitive. 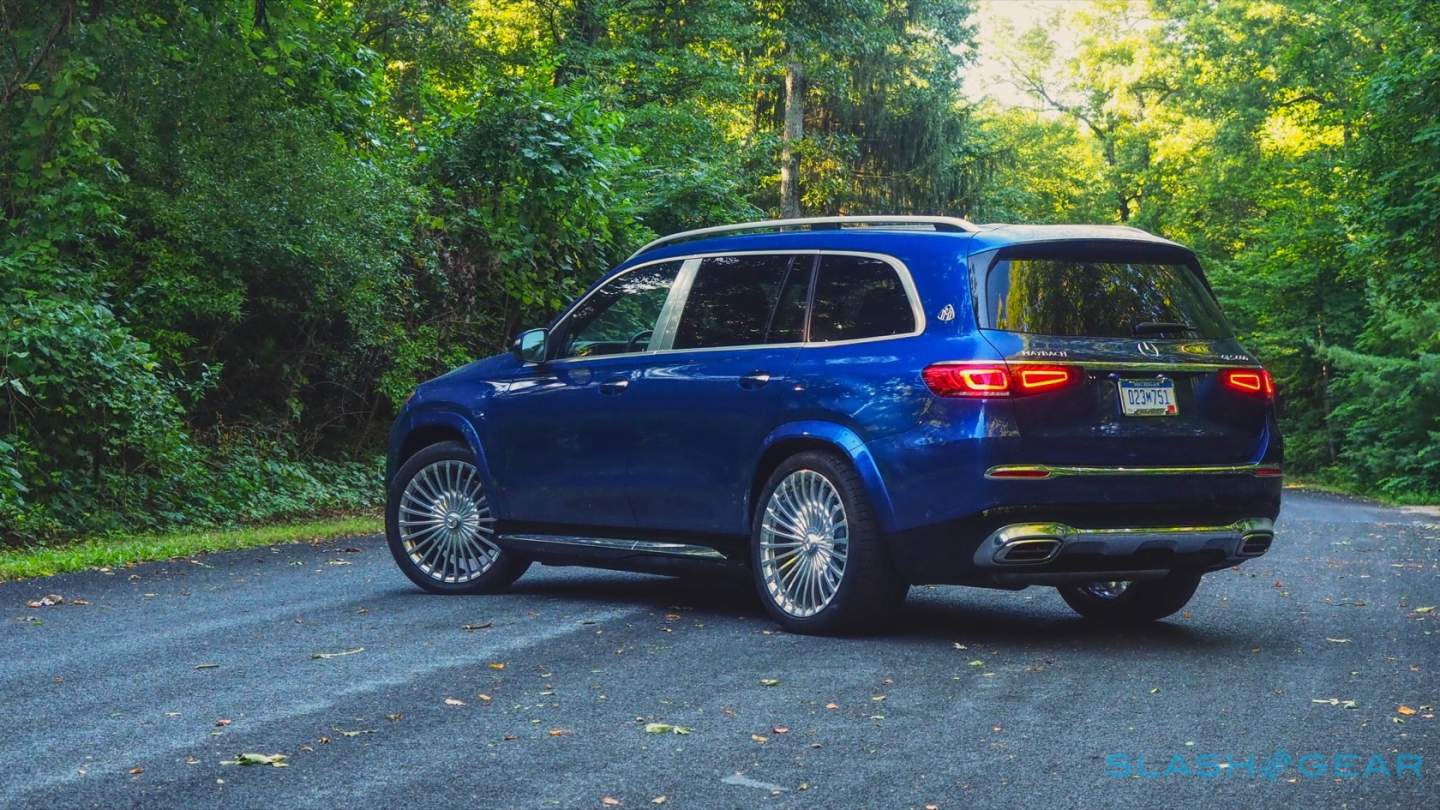 The most conspicuous rivals are Rolls-Royce’s Cullinan, Bentley’s Bentayga, and Lamborghini’s Urus. None of that trio is lacking in performance, nor visual drama, and all three have a sticker price that starts somewhere north of the Maybach’s. In the case of the Bentayga, that delta – before options, anyway, of which Bentley has plenty to choose between – isn’t vast. You could have two Mercedes for the price of a single Cullinan, however.

Like those counterparts, Maybach takes a capacious cabin and fills it with luxury rather than seats. As standard, the GLS 600 has accommodation for just four, the rear dominated by two articulated thrones that leave you in no uncertainty as to who is the most important passenger. Mercedes will, if you prefer, swap that second row for a more straightforward bench and in the process nudge the total seating to five. 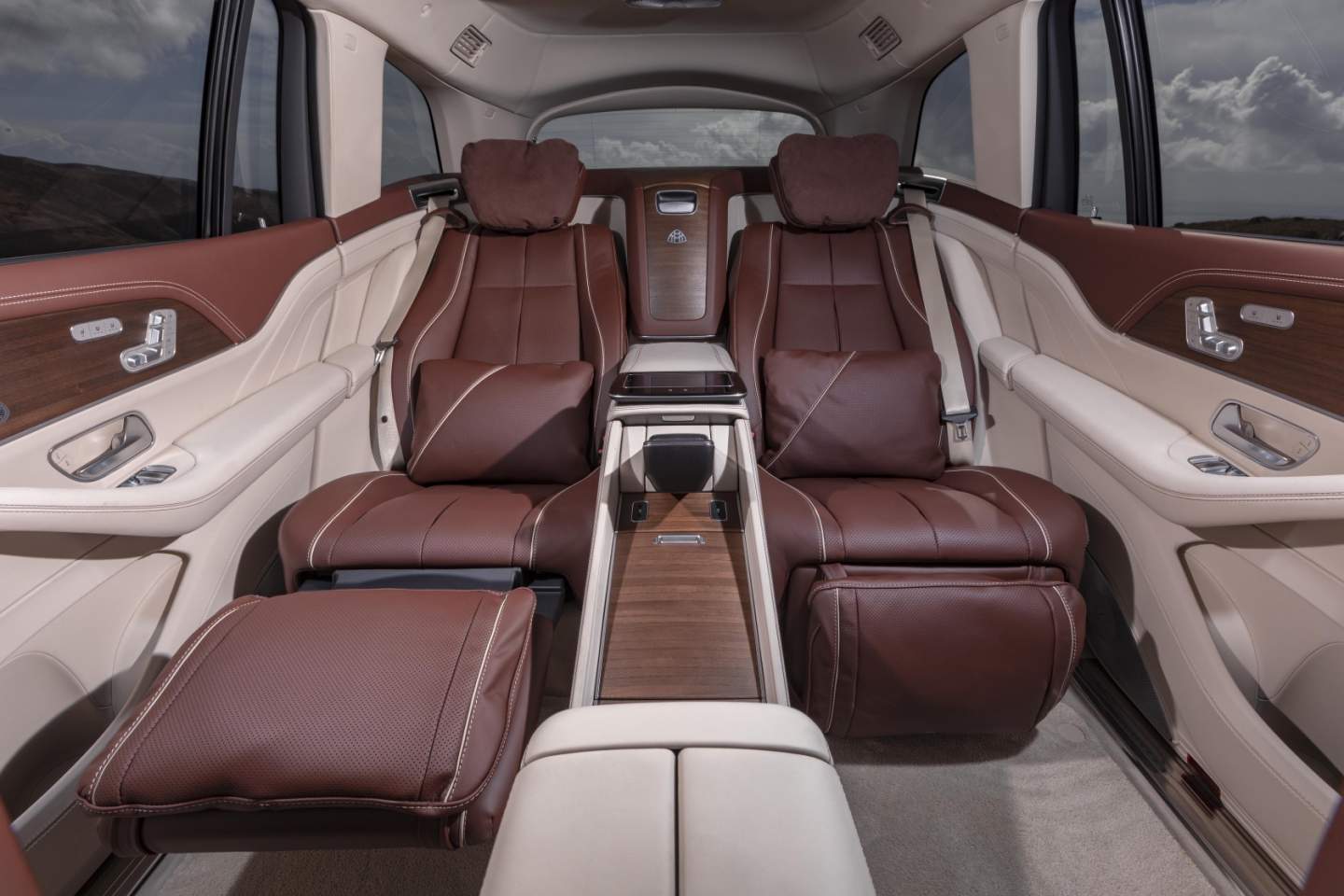 Skipping that seems sensible, as does checking off the boxes which help elevate the Maybach from its regular GLS cousin. That’s a problem the Cullinan, Bentayga, and Urus need not deal with, unique in their respective line-ups: Mercedes, in contrast, has to work a little harder to distinguish this most lavish of SUVs. 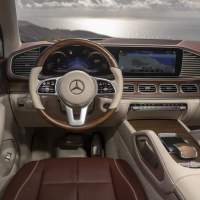 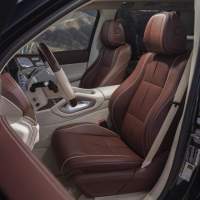 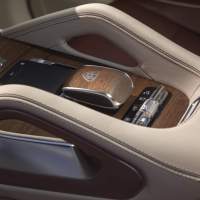 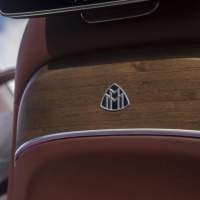 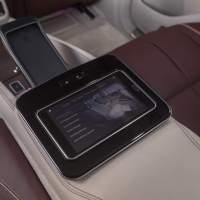 Rear seat passengers get a removable tablet in their center console, from which a broad subset of the MBUX infotainment options are available for remote control. If they want the champagne fridge that’s $1,100, however. The folding rear tables are $1,800, and the rear seat entertainment system clocks in at over $2,500. A set of Maybach champagne flutes is $800.

Again, this is not a segment where budget is the primary concern, but there’s still a lot of regular GLS here even after you splash out. That’s no lacking SUV in its own right, of course, but at $174,520 all-in for my Brilliant Blue review car there was still a little too much overlap for my liking. 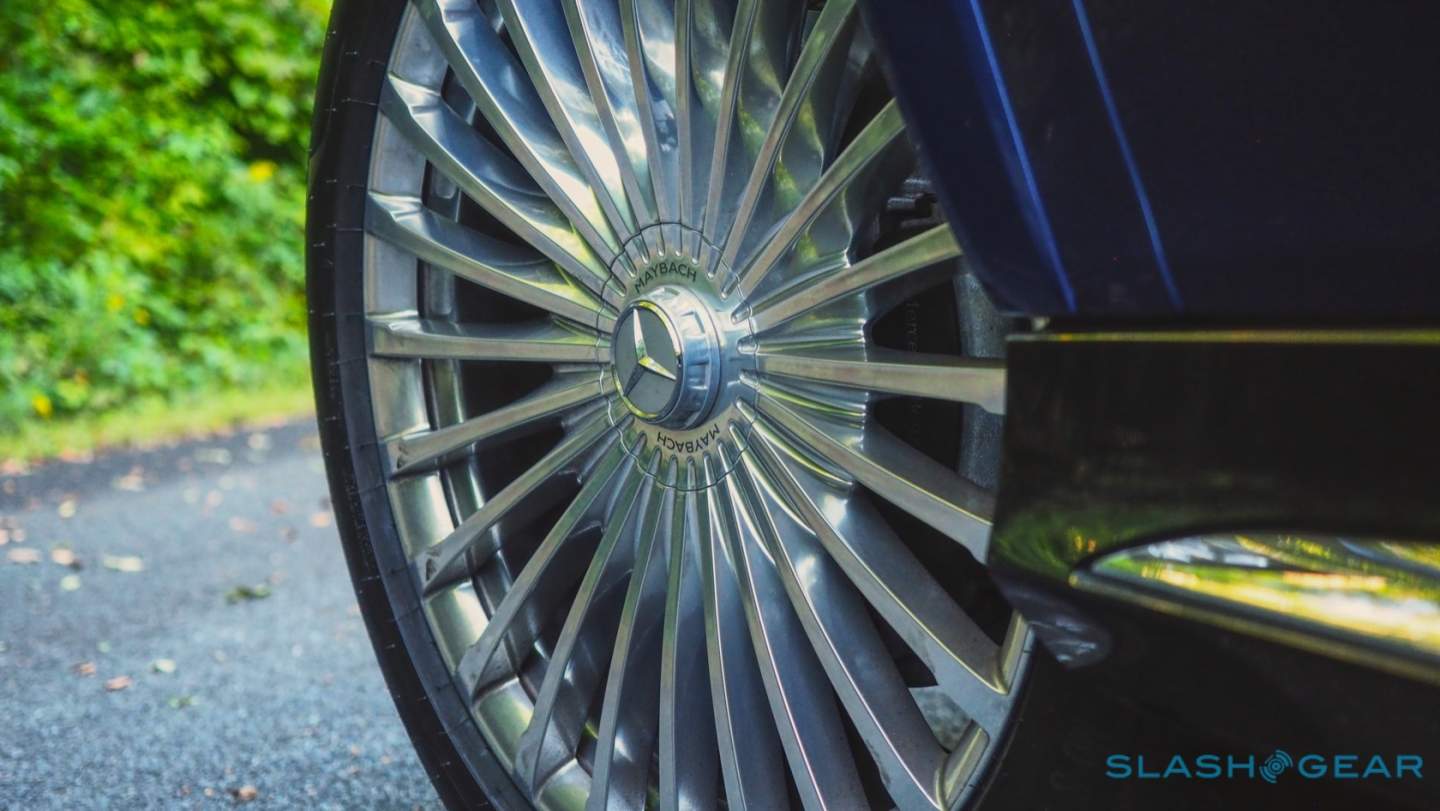 As for the engine, the 4.0-liter V8 biturbo with EQ Boost is another known-quantity in Mercedes’ line-up, though no less special for that. With 550 horsepower and 538 lb-ft of torque it’s not the most potent tune of the eight-cylinder that we’ve seen – AMG coaxes more from it in some applications – but that feels like nitpicking when you’re still talking about potency more akin to sports cars.

Floor it, and 0-60 mph arrives in 4.8 seconds, the 9G-TRONIC 9-speed automatic transmission somehow managing to combine comfortable slush with speedy cog-shifting too. While the engine may get top billing in the drivetrain normally, I think it’s the Maybach’s automatic that contributes more magic day to day. Its distant whirring even has a special Maybach drive mode that – in the name of ensuring the mechanicals aren’t intruding on your zen time – starts out in second gear and tamps down on throttle response for a suitably silky experience. 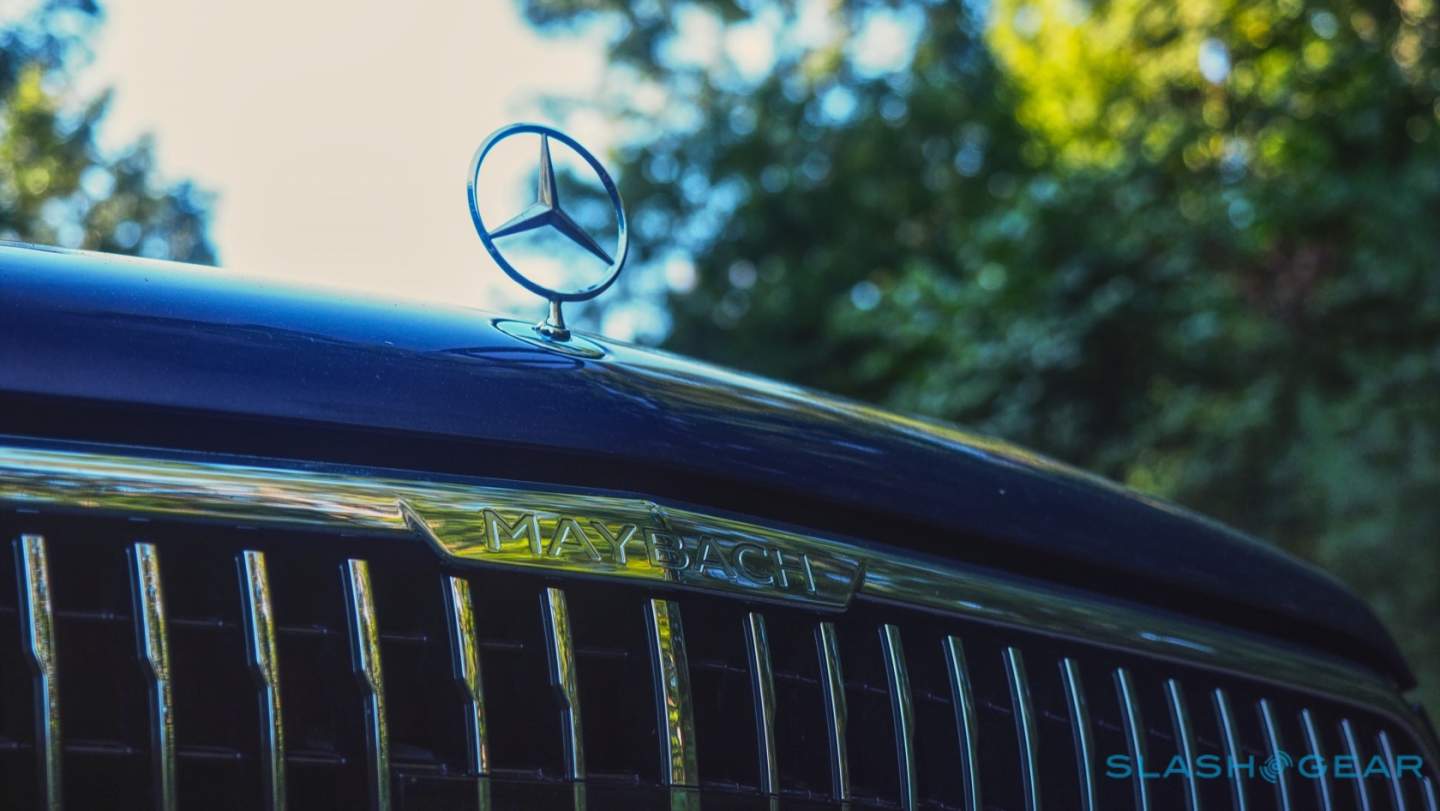 There is, of course, a Sport mode, though don’t expect things to be quite as lithe and eager as the AMG version of the SUV can be. Maybach’s air suspension tuning always errs on the side of comfort; there’s a Curve mode for twisting routes, which promises to lean into the corners so as to trim some of the over-cushioned bounce. Even so, the ride can feel a little like that of a boat cresting waves at times, particularly when the road surface is lacking, as the GLS attempts to blur what’s outside into respectful distance.

Better, then, to settle back and cruise. It’s a mood that suits the big SUV well, and in Maybach form even more so. Even with the vast alloys, there’s a remoteness to the hubbub of the world beyond the glazing which lends itself beautifully to road trips. Only having to pause to refuel – something that, with 15 mpg in the city and 19 mpg on the highway, Mercedes at least tries to delay with an almost 24 gallon tank – will interrupt. 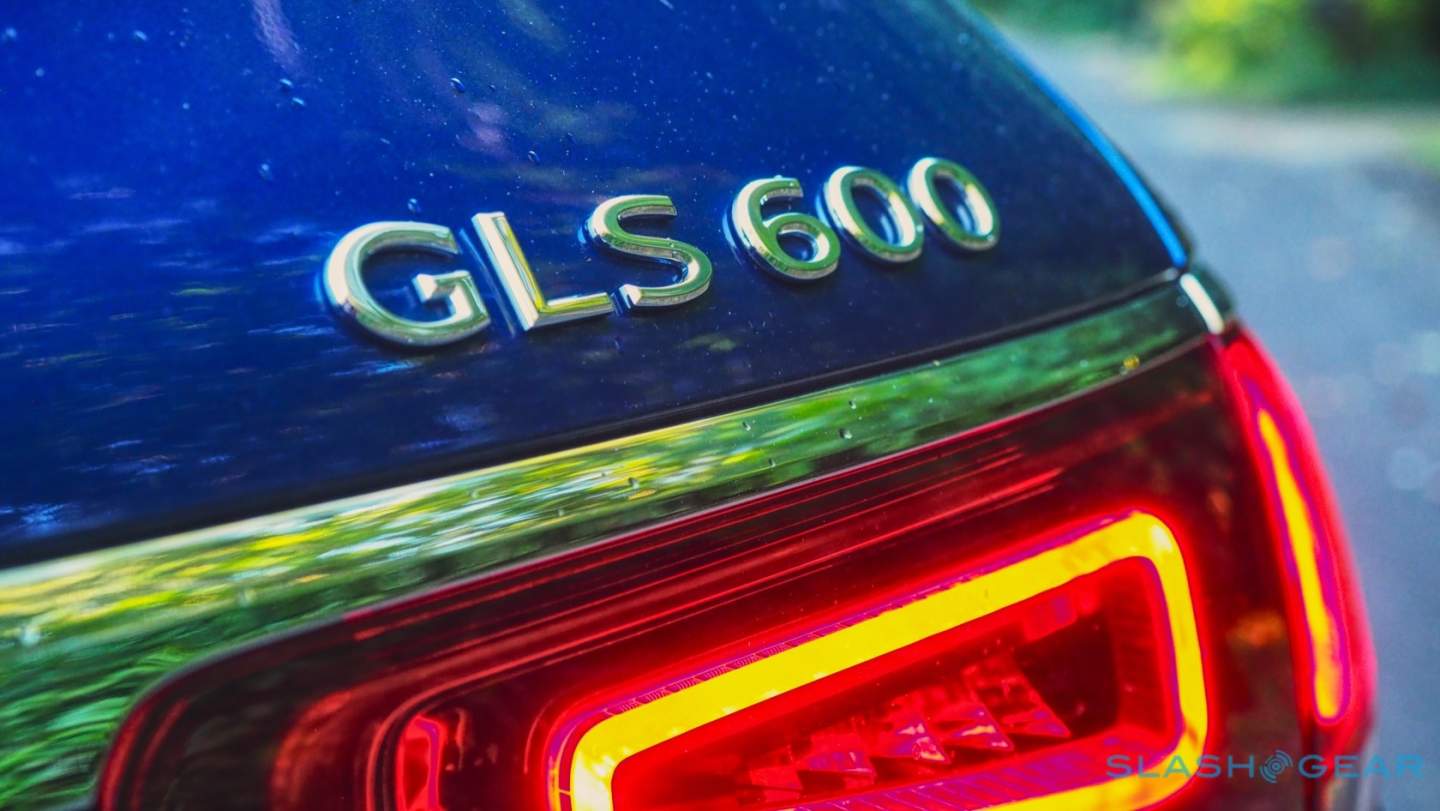 EQ Boost contributes some electric shove, as well as smoothing out the stop/start system. It’s a mild-hybrid, mind, rather than a plug-in. We’ll need more patience before we see a fully-electric Maybach, though it’s certainly something the automaker is considering. September’s Concept Mercedes-Maybach EQS was a thinly-veiled preview of that electric SUV, though it’ll have to wait for the standard EQS to launch first in 2022.

While prestige and road presence are undoubtedly key aspects of the luxury car experience, at their core SUVs like these are about isolating those inside from the rudeness of the real world. In the key mechanical ways, the Maybach does that with aplomb: its seductive blend of V8, gearbox, and air suspension helping generate a wafting bubble filled with leather and tech. 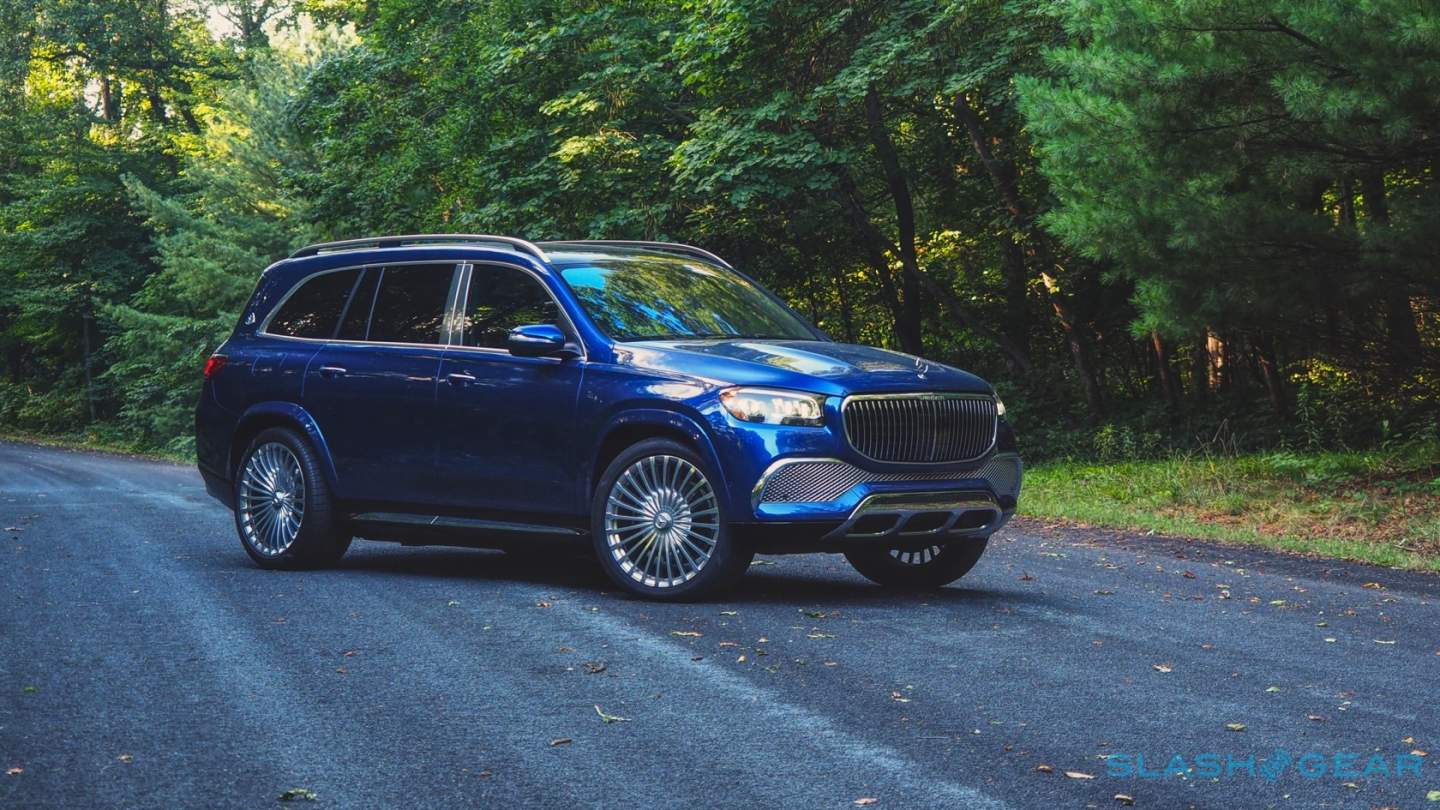 If there’s a problem, it’s perhaps that the regular GLS does such a good job of that already. A GLS 580 is potent and lavish, but it also starts at around $100k. You can see why the Maybach team didn’t feel the need to throw out everything in the standard SUV as a result, but it also means what remains is a periodic reminder of the GLS 600’s origins.

It’s a mental reset that Cullinan, Urus, and Bentayga owners don’t encounter, though they pay handsomely for that privilege. The Mercedes-Maybach GLS 600 is exceptionally refined and – assuming you’re fond of chrome – certainly doesn’t lack presence, but it feels like a more rational choice than its SUV competition. Whether that’s a dealbreaker will depend on how much uniqueness factors into your own interpretation of true luxury.