Pity, for a fleeting moment, the deep-pocketed driver who demands profligacy in the bedroom and in the garage, and needs a performance SUV to match their offspring. With three rows, seven seats, and more than six hundred horsepower on ready tap, the 2021 Mercedes-AMG GLS 63 is neither a subtle nor cheap way to haul a big family. All the same, though it’s not for everyone, it’s tough not to feel the tug of its wanton mechanical charisma.

The GLS is a big SUV. At 206 inches long, almost 80 inches wide, and a smudge over 70 inches tall, it has presence in the same way that Brutalist architecture has presence. Looming and imposing, there are curves and contours but scale renders them geological. 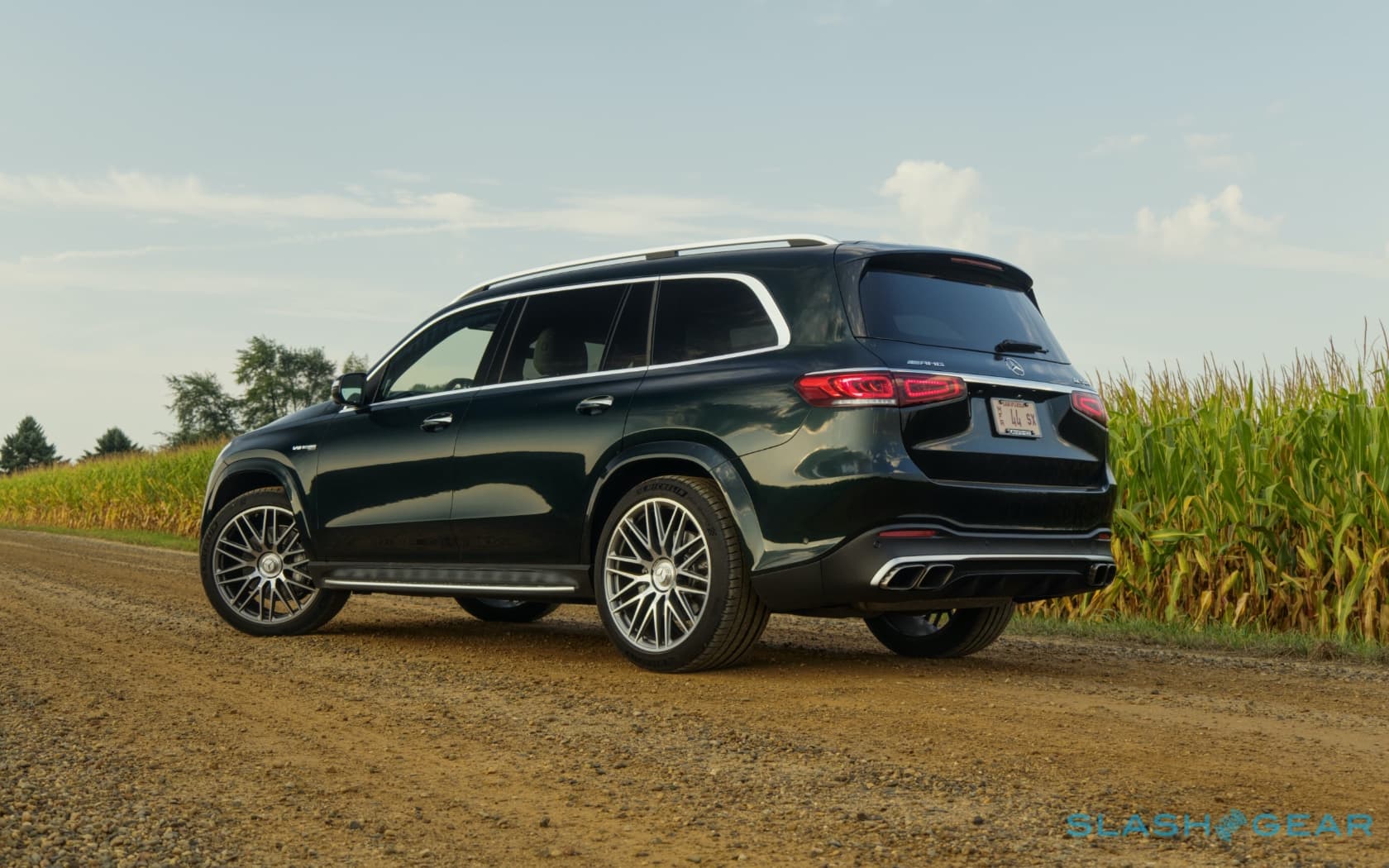 It requires matching scale from AMG’s glitter, then. The $4,450 23-inch multi-spoke forged wheels should look monstrous, but here they’re merely arch-filling. AMG’s oversized front and rear lower fascias – with their curlicue of chrome – are bigger on their own than the front of many cars, and yet on the GLS 63 they’re right at home. 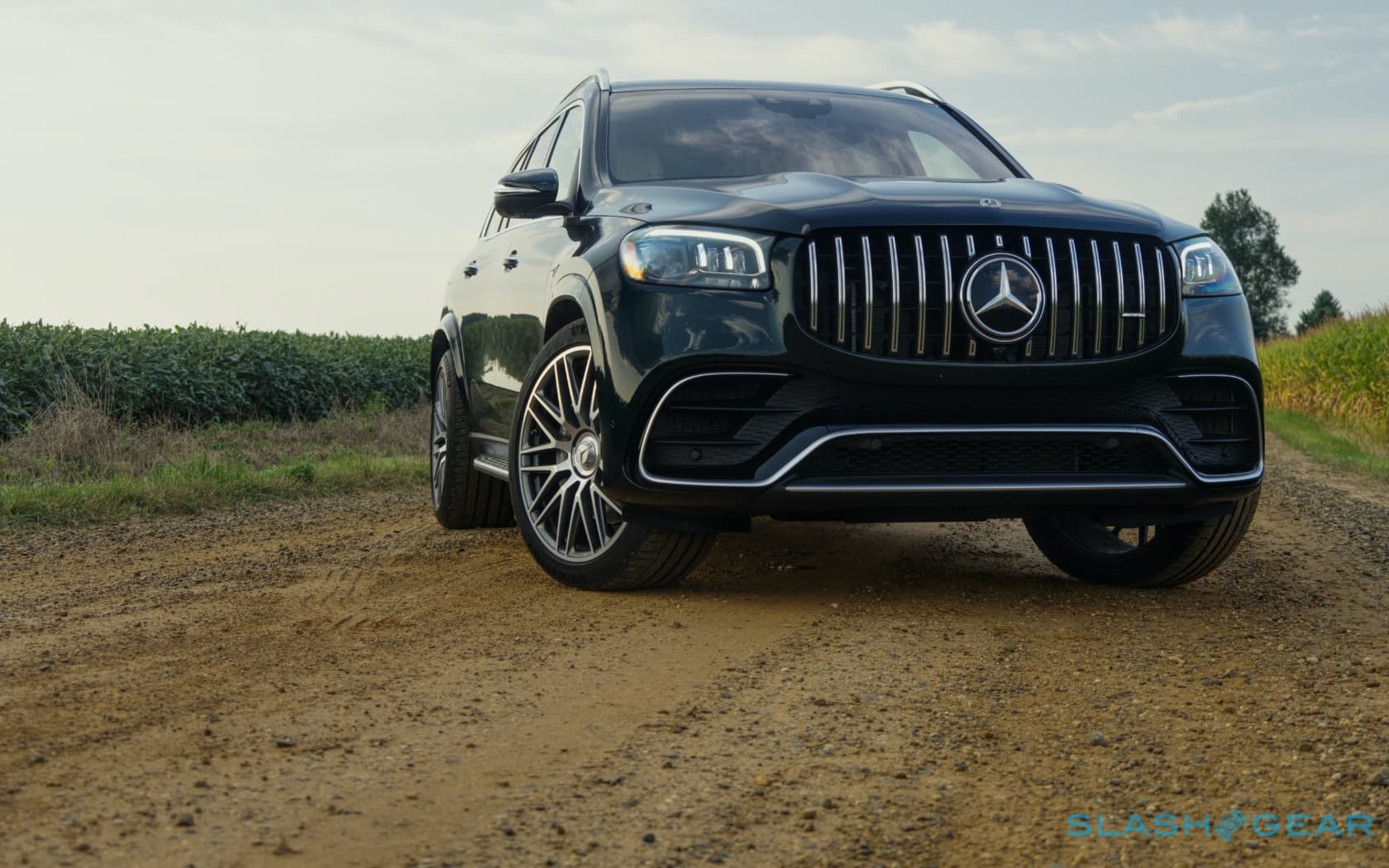 The stand-out is the Panamericana grille, giving the burly SUV the glittering maw of a basking shark turned rap artiste. Flashy? Well sure, but if you’re surprised then you must be new around these parts. Even Mercedes’ Emerald Green paint, not typically a stand-out hue, gains unexpected depth on a vehicle of this size. 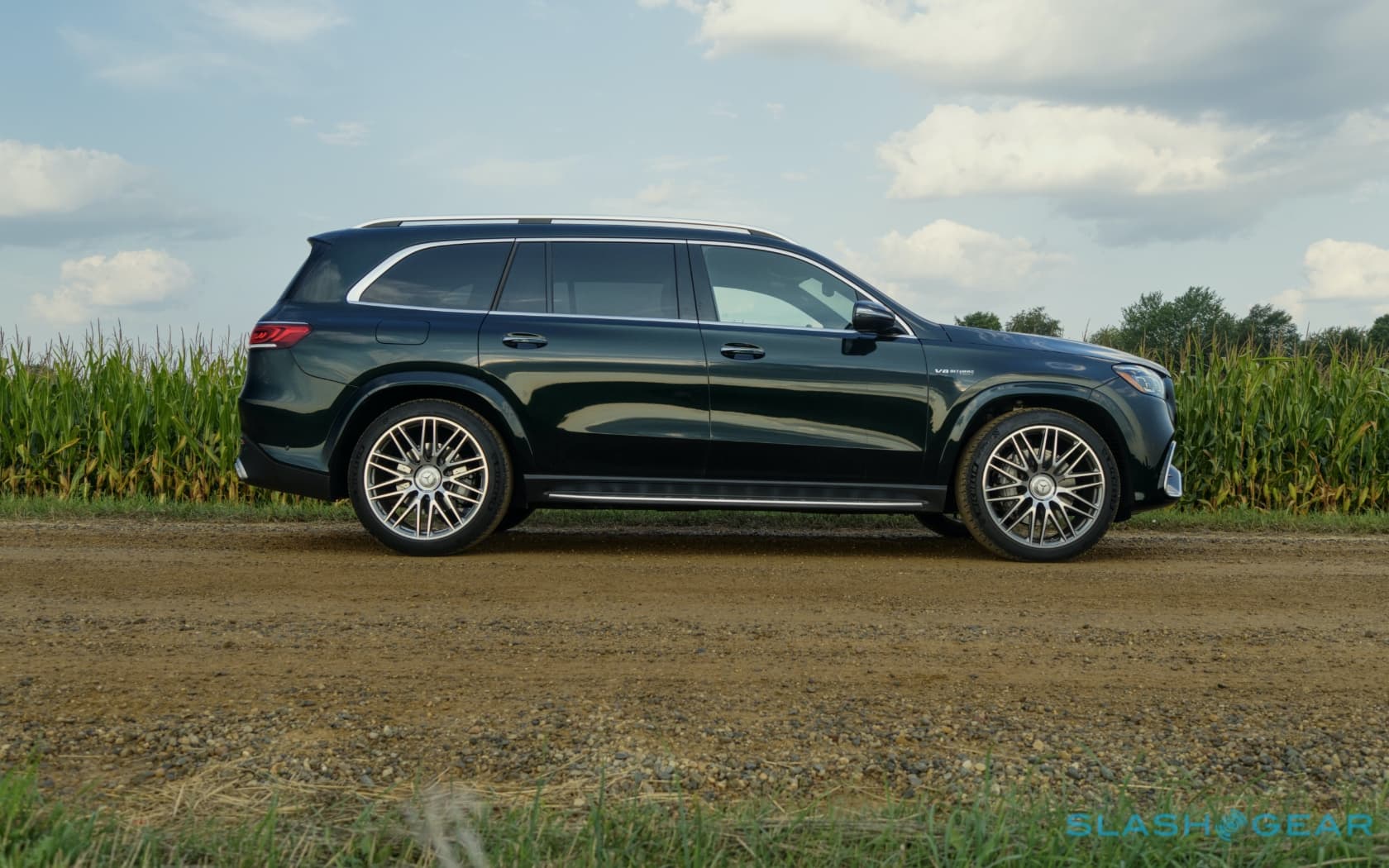 If the SUV is big, the engine is its equal. The AMG 4.0-liter V8 Biturbo is finished by hand, mustering 603 horsepower and a lavish 627 lb-ft of torque. EQ Boost lends an extra 21 hp and 184 lb-ft for short periods, while also helping leave the stop/start system silky.

AMG says it’ll do 0-60 mph in 4.1 seconds and, when you consider this is a vehicle with a curb weight of 5,798 pounds, that number isn’t just impressive it’s downright bizarre. Straddling a Teflon-coated shipping container and nudging it down a ski slope would be less dramatic than the experience of hitting the GLS 63’s gas pedal in earnest. It feels monumental, every kind of excessive, and just about unstoppable. 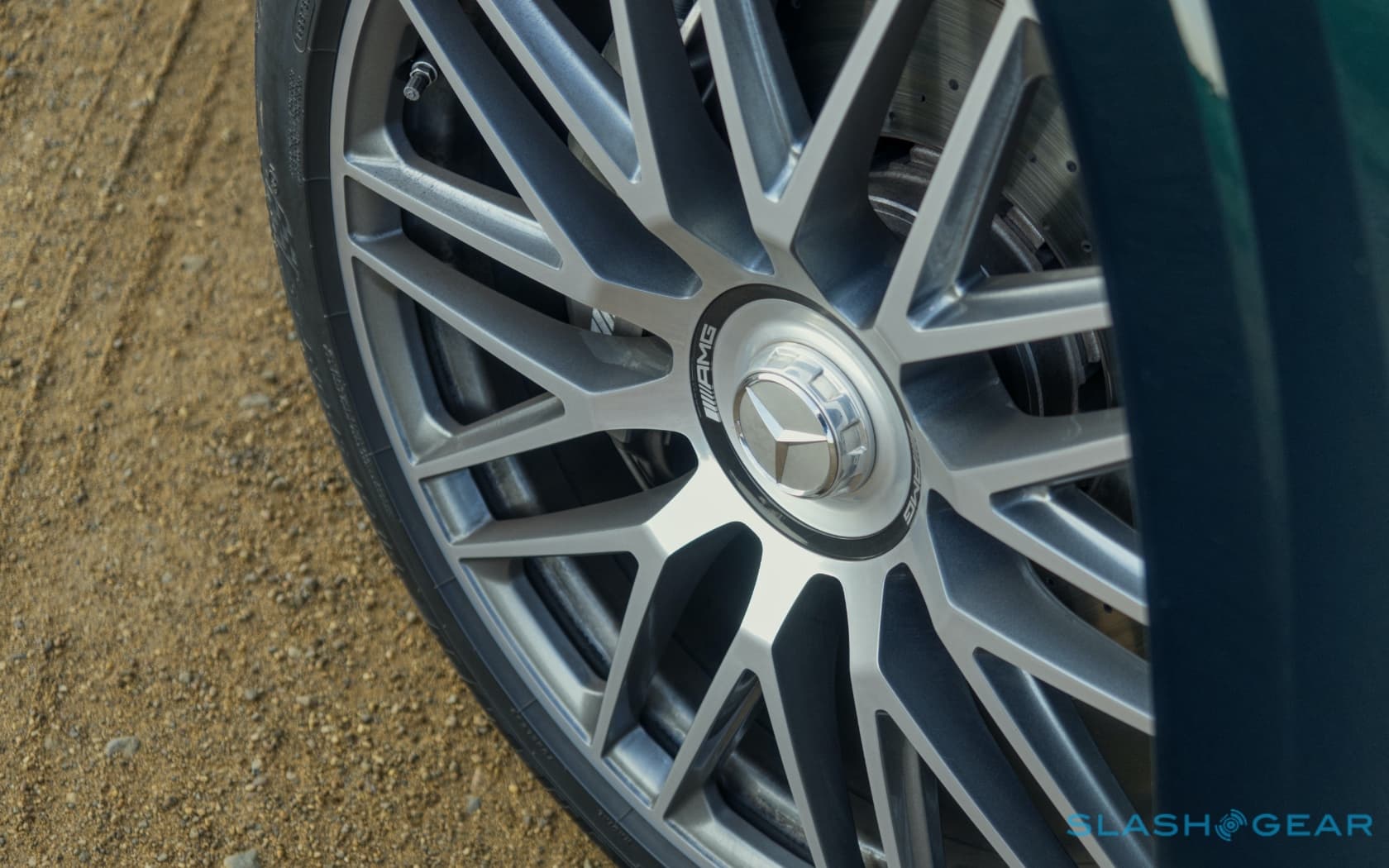 Happily, the latter isn’t in fact the case. The standard brakes use 15.7-inch discs at the front and 14.6-inch versions at the rear, and were momentum to have an arch-rival then they would be it. Get carried away and throw on the anchors from particularly outlandish speeds and sure, reality will demand acknowledgement and things can get a little squirmy. All the same, I never had any doubt that the GLS couldn’t handle it, even if my nerves might be tested at the same time.

In-between the going fast part and the slowing down after it there’s some serious cruising to be done. AMG Performance 4MATIC+ all-wheel drive, Active Ride Control suspension, Active Dynamic Engine Mounts, and an AMG Electronic Limited Slip Differential are all standard, and all designed to do their utmost to ensure that V8’s power is routed as effectively as possible to the asphalt or, dare you risk the rims, off-road. 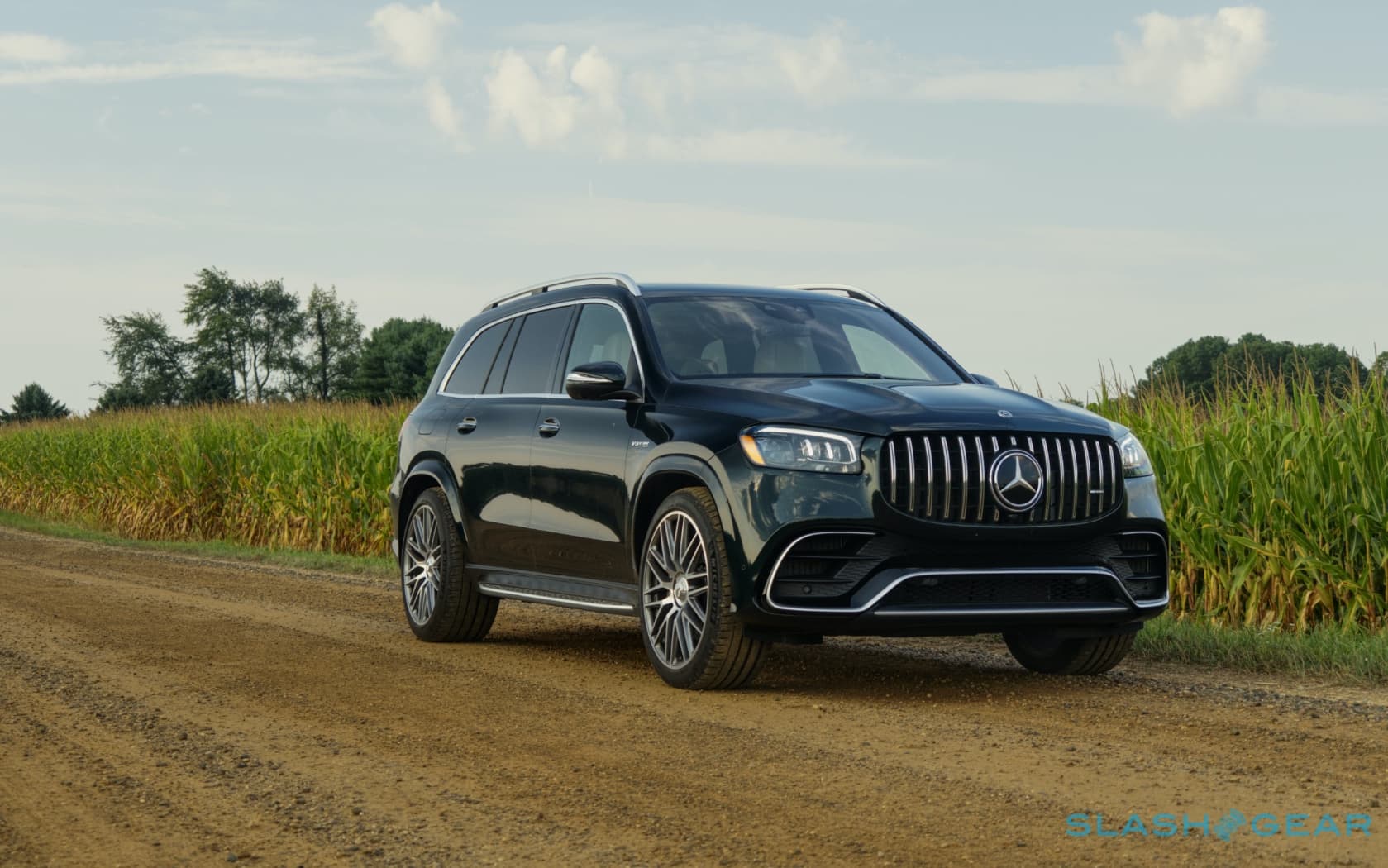 In Comfort mode, the GLS 63 wafts cloud-like. The road below may have been neglected to the point of all-out corrugations, but you’d never know it. Serenely level, the nine-speed transmission lugubriously shuffling cogs, it’s not dissimilar to what I’d imagine having your own little Japanese bullet train might be like.

There are Sport and Sport Plus options, of course, and individual control over the air suspension settings, and a button to crank up the quartet of tailpipes. Set the GLS 63 to its feistiest, Destroyer of Worlds mode and, though AMG might not entirely beat physics, it will stack the deck in your favor as much as it can. 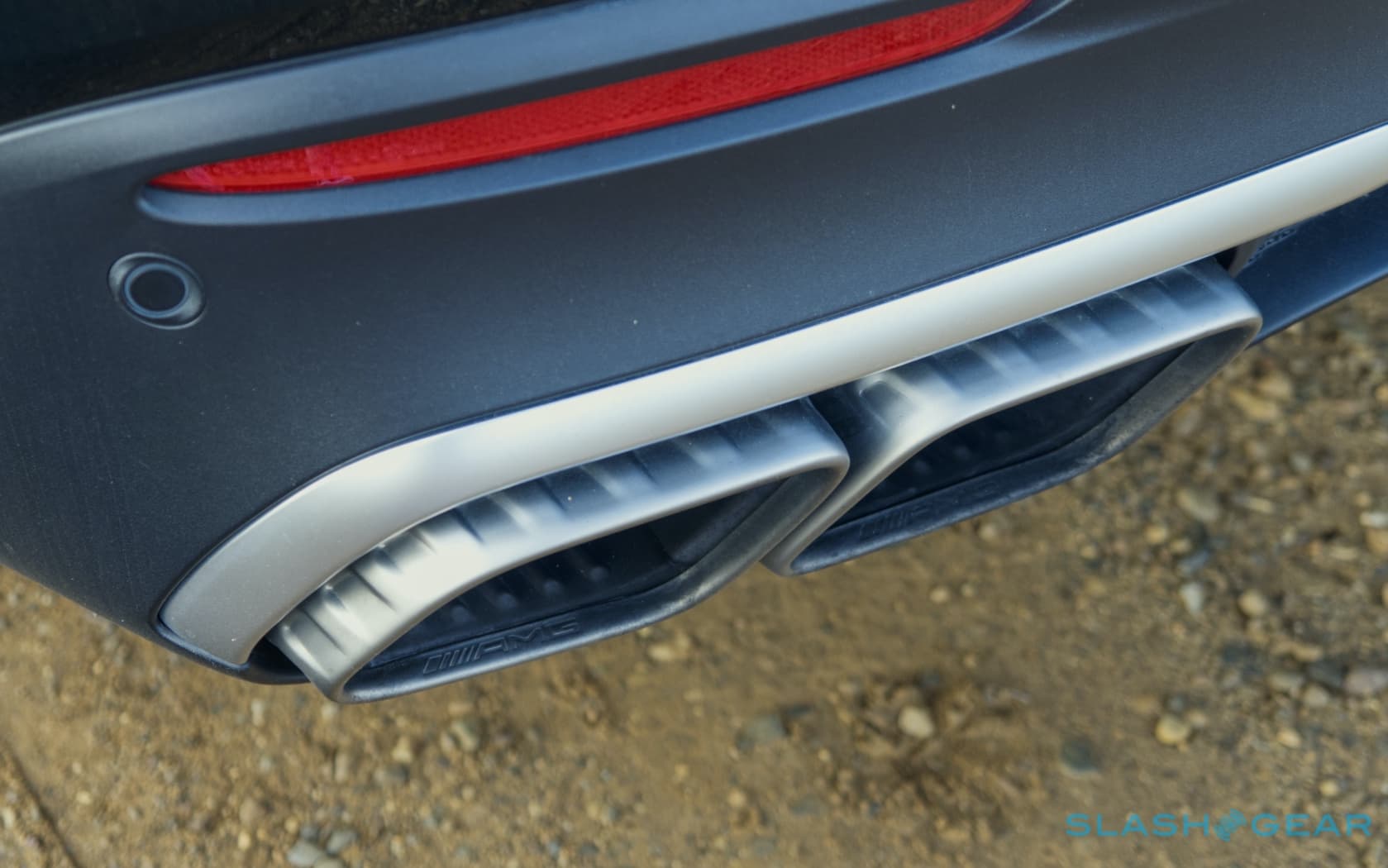 Hit the gas and the 9-speed hurls itself down through the ratios, engine growling like a bassoon full of clotted cream as the GLS 63 just pulls. The suspension does a near-magical job of keeping things stable and level, with the active anti-roll bars lending their talents as you weigh into the corners. Take a guess at what speed you’d consider safe’n’sensible for the bends and then add a little on top: AMG’s handling tuning may be most praised in its lithe, track-ready two-doors, but I’d argue what they’ve achieved here is more impressive still.

The truth of it is that you can drive the AMG GLS 63 much faster than you probably want to drive it. That mix of scale, weight, and animal instinct for self-preservation make it less fun on twistier routes than the numbers and capabilities might suggest. 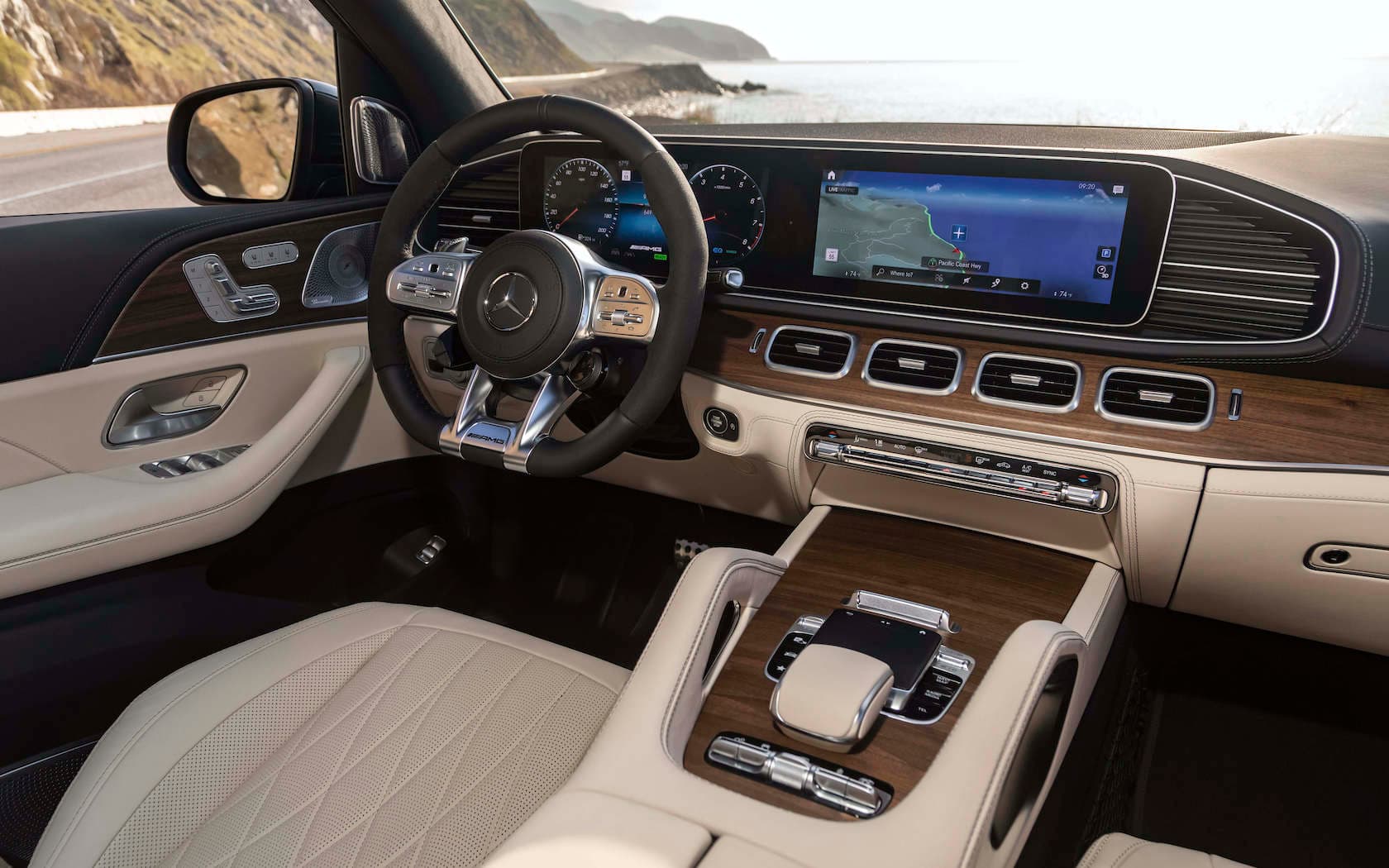 Far better, then, to settle back into an interior that’s similarly lavish. Not for nothing, when Mercedes-Maybach decided to make its first SUV, did it look to the GLS for inspiration. AMG’s cabin puts more focus on the driver than the new Maybach GLS 600, but neither will prove unsatisfying inside. 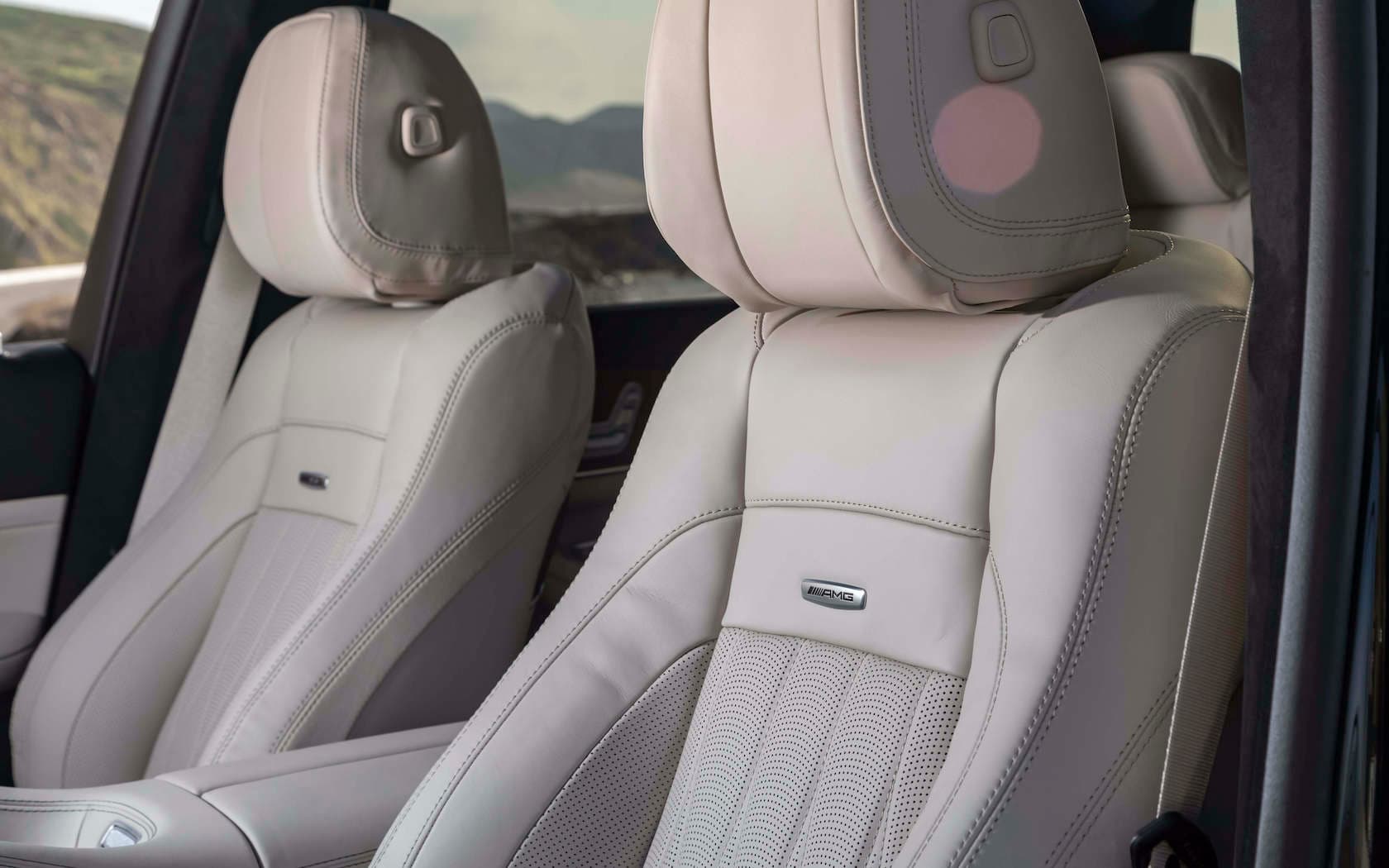 Leather, a panoramic roof, Burmester Surround Sound system, 64-color ambient lighting, heated and ventilated front seats with massage, 5-zone climate control, and soft-close doors are standard. So, too, is the twin 12.3-inch dashboard, the center touchscreen supporting Apple CarPlay, Android Auto, and Mercedes’ excellent MBUX platform with its surprisingly capable voice control system. Vehicles like this tend toward the menu-heavy, and so being able to use natural-language commands like “Hey Mercedes, turn on the seat massage” rather than go digging for the right option is a welcome shortcut. 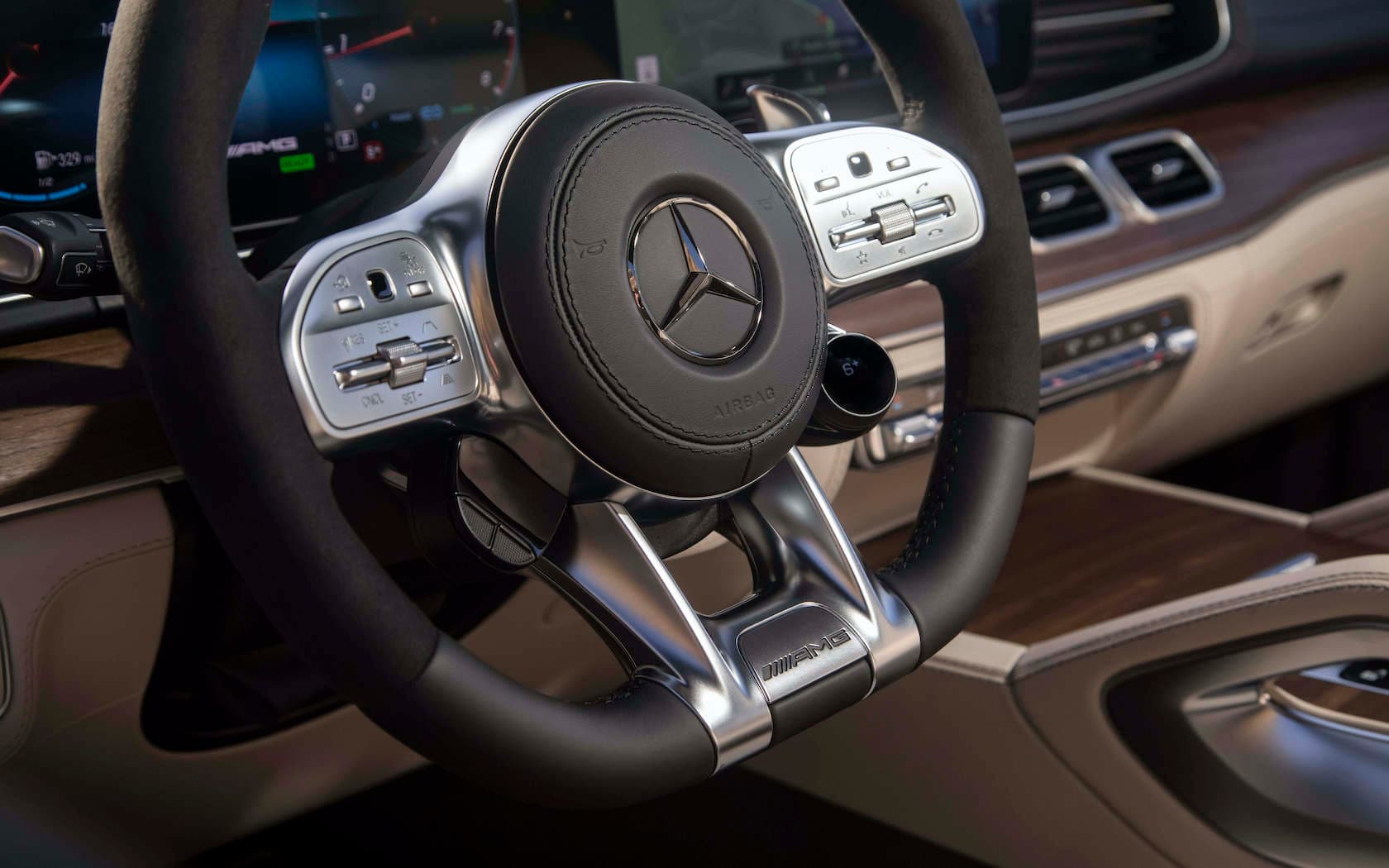 Everything looks, and feels, like it was hewn rather than assembled. The diamond-stitched AMG leather is worth it at just $250, as is the $4,550 Burmester upgrade. $360 gets you heating in the third-row, while the charmingly-named (and $1,100) Warmth and Comfort Package adds heated front armrests and door panels, and a heated rear armrest. My elbows have never felt more cosseted.

Seven seats are standard, with six an option. The first and second rows are plentiful in space and toys; the third is best for kids, and preferably those with cast-iron stomachs if you’re going to tap the V8’s capabilities. With all seats up there’s 17.4 cu-ft of trunk space; that grows to 84.7 cu-ft with those that’ll lower dropped down. All in, the $132,100 (plus $1,050 destination) starting price spiraled up to $149,740 as-tested, including $1,500 for a carbon fiber engine compartment cover that I never looked at. 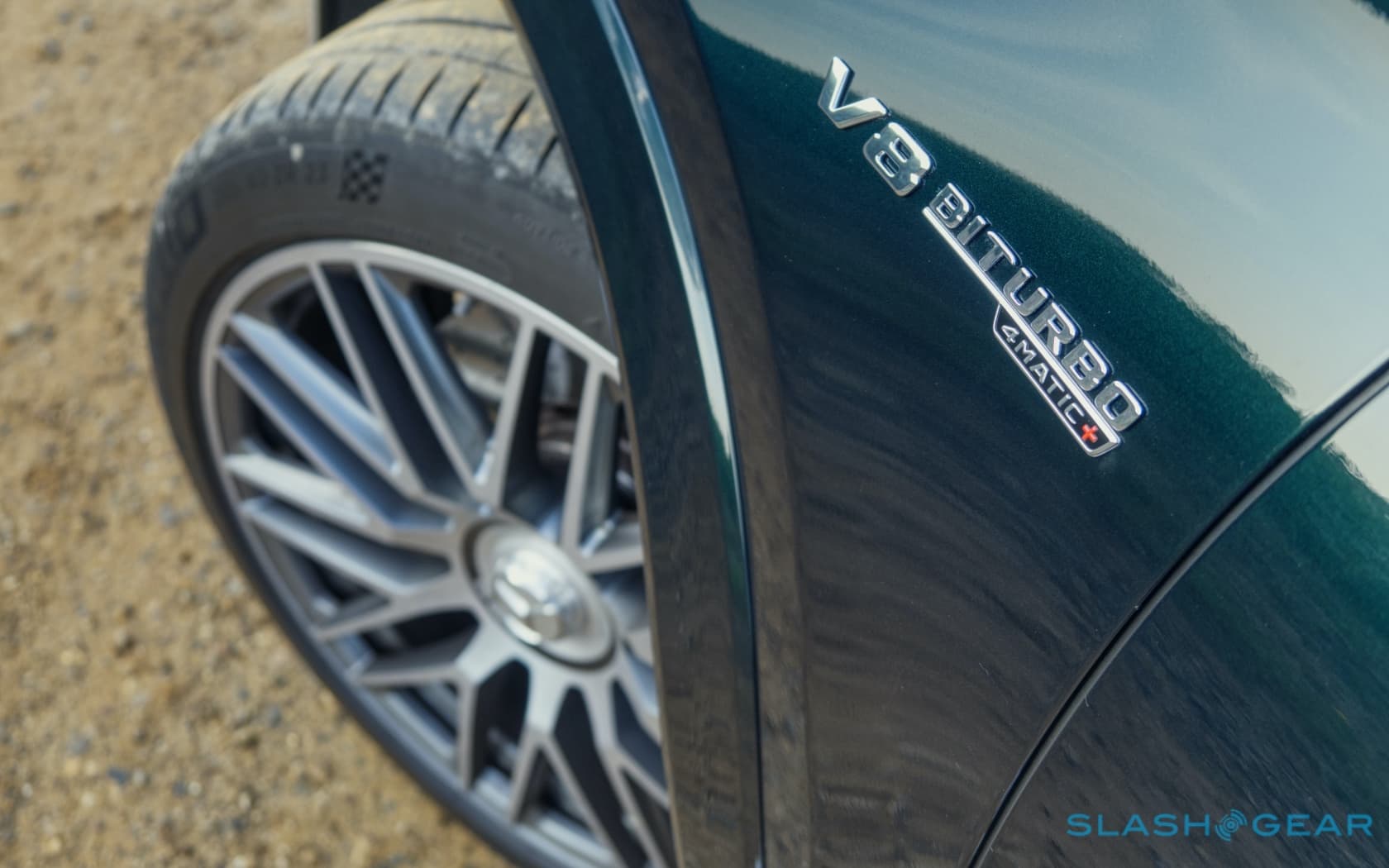 You could well argue that, as options go, that’s pretty illustrative of the AMG GLS 63 altogether. On the face of it, a $150k SUV with 603 horsepower is kinda ridiculous. If I’m honest, for as much as I enjoy the experience, I’ll also readily agree that it’s a vision of profligacy with little in the way of reason to it.

The same goes for efficiency which – with the EPA suggesting you’ll see 14 mpg in the city, 18 mpg on the highway, and 16 mpg combined – is hardly stellar. Then again, it’s about what a 2021 Escalade is rated for, and I saw a slightly higher miles per gallon number from the AMG than from Cadillac’s blunt-edged beast. Still, economy numbers in the teens are nothing to be proud of. 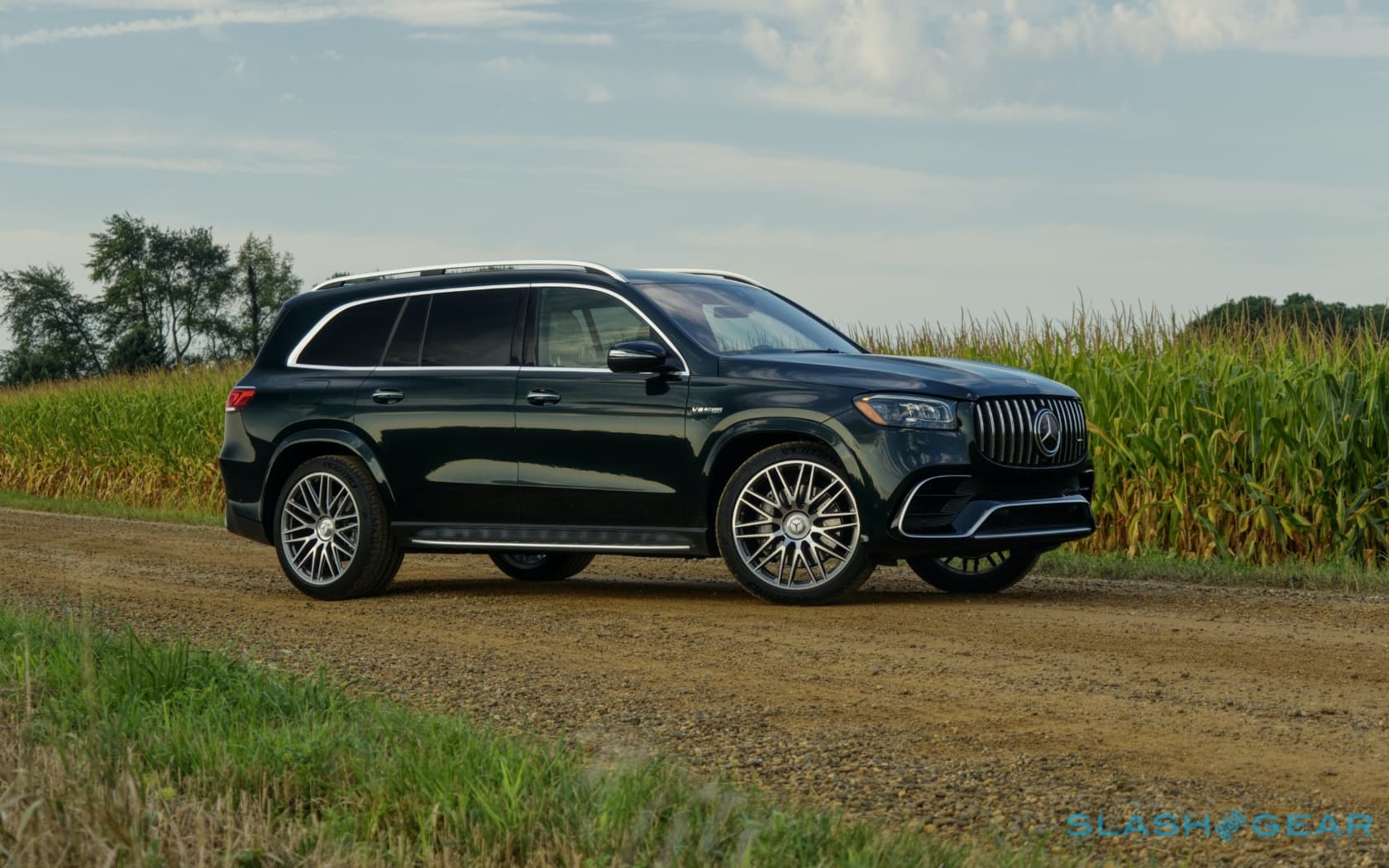 Let’s face it, though, the AMG GLS 63’s audience cares not a jot. Your options, should your priority be blistering speed and space for seven, are fairly limited: the new BMW Alpina XB7 comes closest and has even greater badge-rarity in its favor, but it still falls short of the sheer presence the Mercedes enjoys. AMG made a Brutalist brawler for the driver who wants space and speed, and while we can argue the small print there’s no denying that on that front the AMG GLS 63 delivers.