Glistening with chrome, the 2021 Bentley Flying Spur V8 is eye-catching. In Blackline Specification, with the shiny stuff swapped out for black, and rolling on 22-inch machined alloys redolent of macerating blades from something hungry and industrial? Other drivers either chase you to get a better look, or they sensibly get out of your way altogether.

The solid Barnato green – one of multiple shades the automaker offers – is unusual too, and a welcome change from the usual metallic grays and blues. Bentley’s Flying B mascot, with its glowing inset crystal, somehow doesn’t seem quite so ostentatious when it’s at the prow of a car more than 17 feet long. 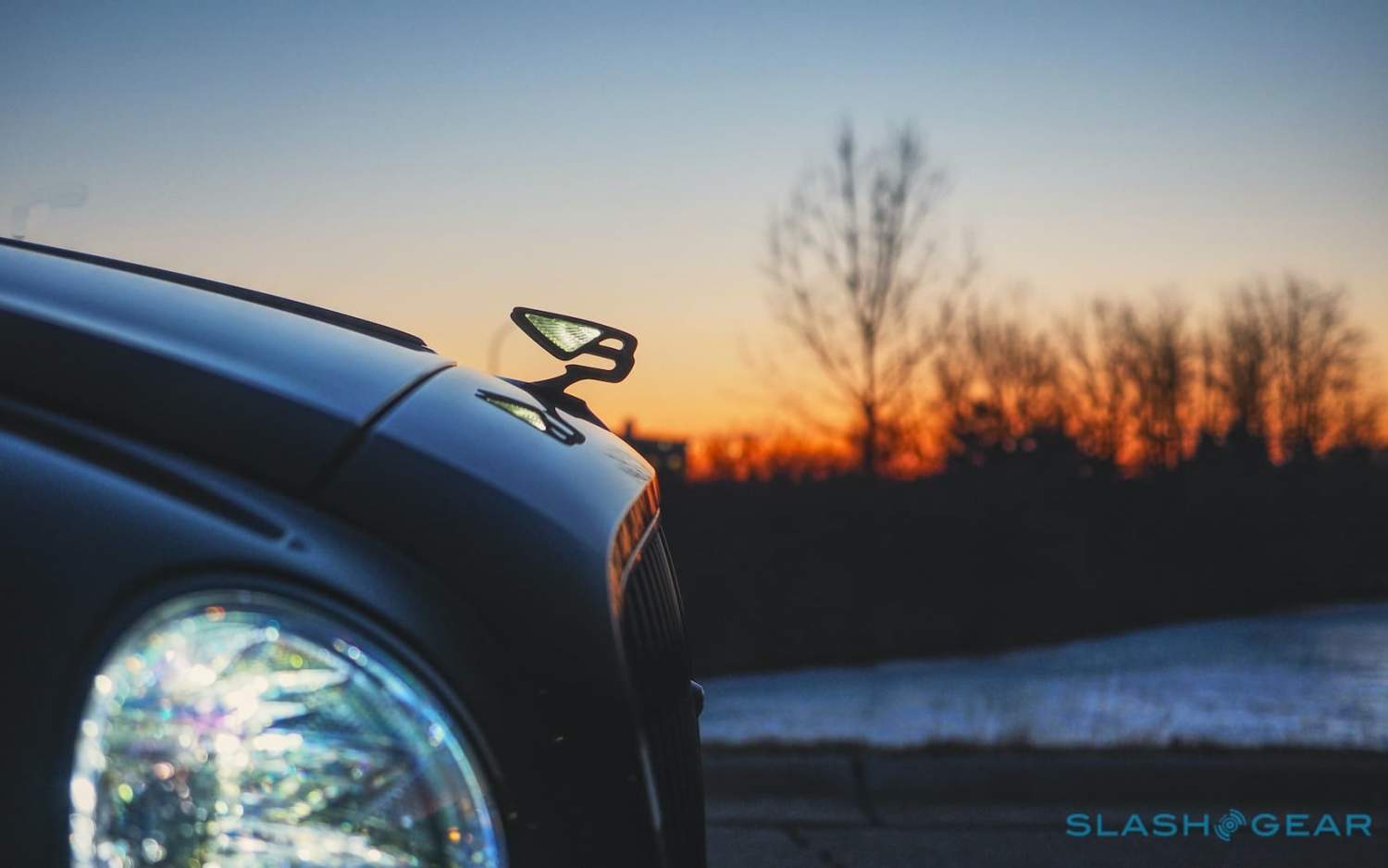 Outward differences between the W12 and this V8 car are minimal. The primary giveaways are the badging just behind the front fenders, and the tailpipes. Both engines, unsurprisingly, command big-ticket price tags: $196,000 (plus $2,725 destination) for the Flying Spur V8 to start with, but climbing in this case to $264,565 all-in after a midsize Mercedes’ worth of options. 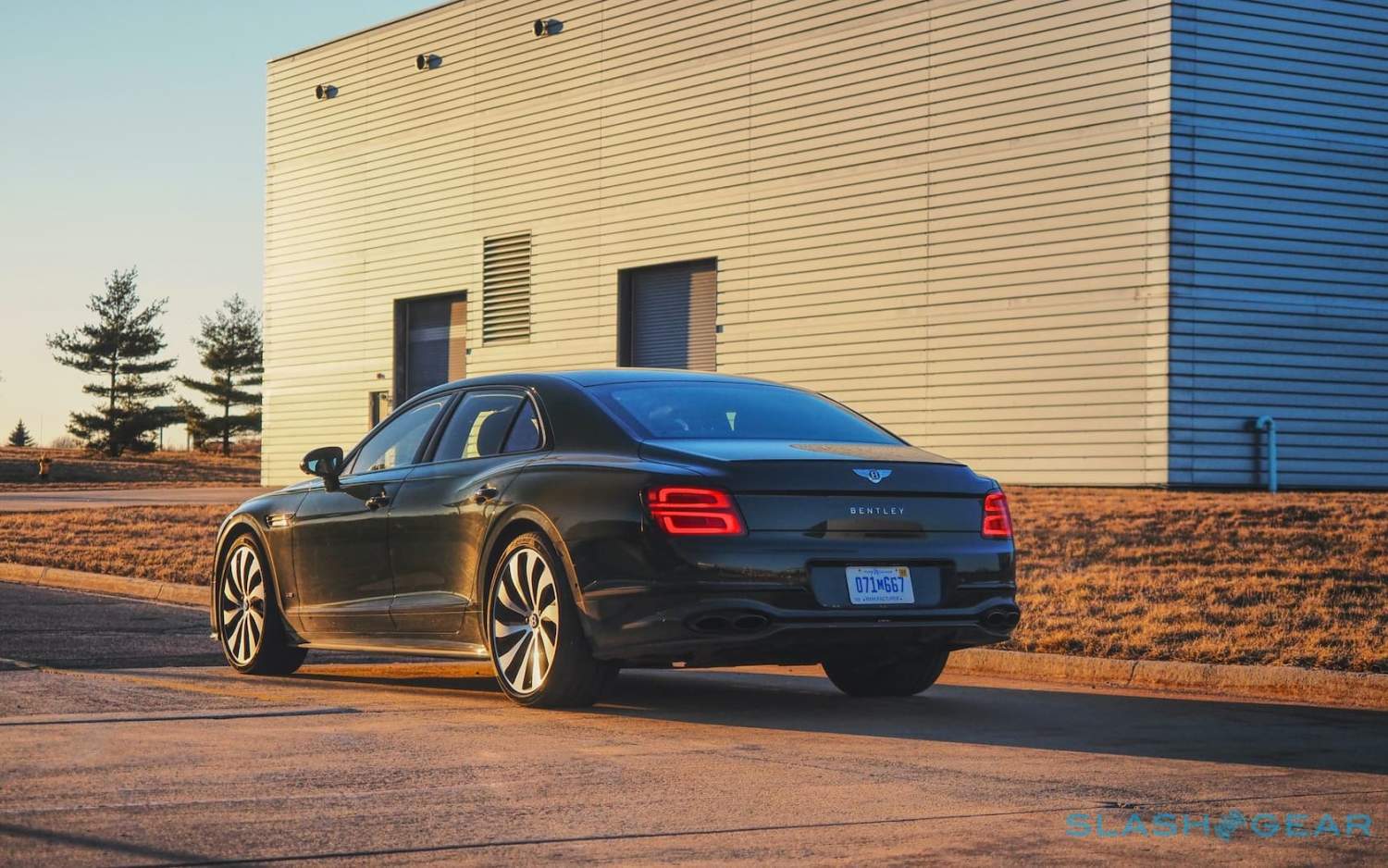 Power is down in this V8 version, but that feels a little like saying “this large volcano is erupting and threatens my village” versus “this very large volcano is erupting.” Either way, the end result is more fire and brimstone than you know what to do with it. Bentley’s twin-turbocharged 4.0-liters deliver 542 horsepower and 568 lb-ft of torque. A slight compromise on the W12’s 626 horses and 664 lb-ft, true, but 0-60 mph only takes 4.0 seconds to arrive, and it’ll rocket impossibly on to 198 mph.

Big Daddy Spur, with its two extra liters and four more cylinders, will do the run in 3.7 seconds and keep on going to a terrifying 207 mph. He’s also carrying more weight, however, with the V8 helping trim over 200 pounds. 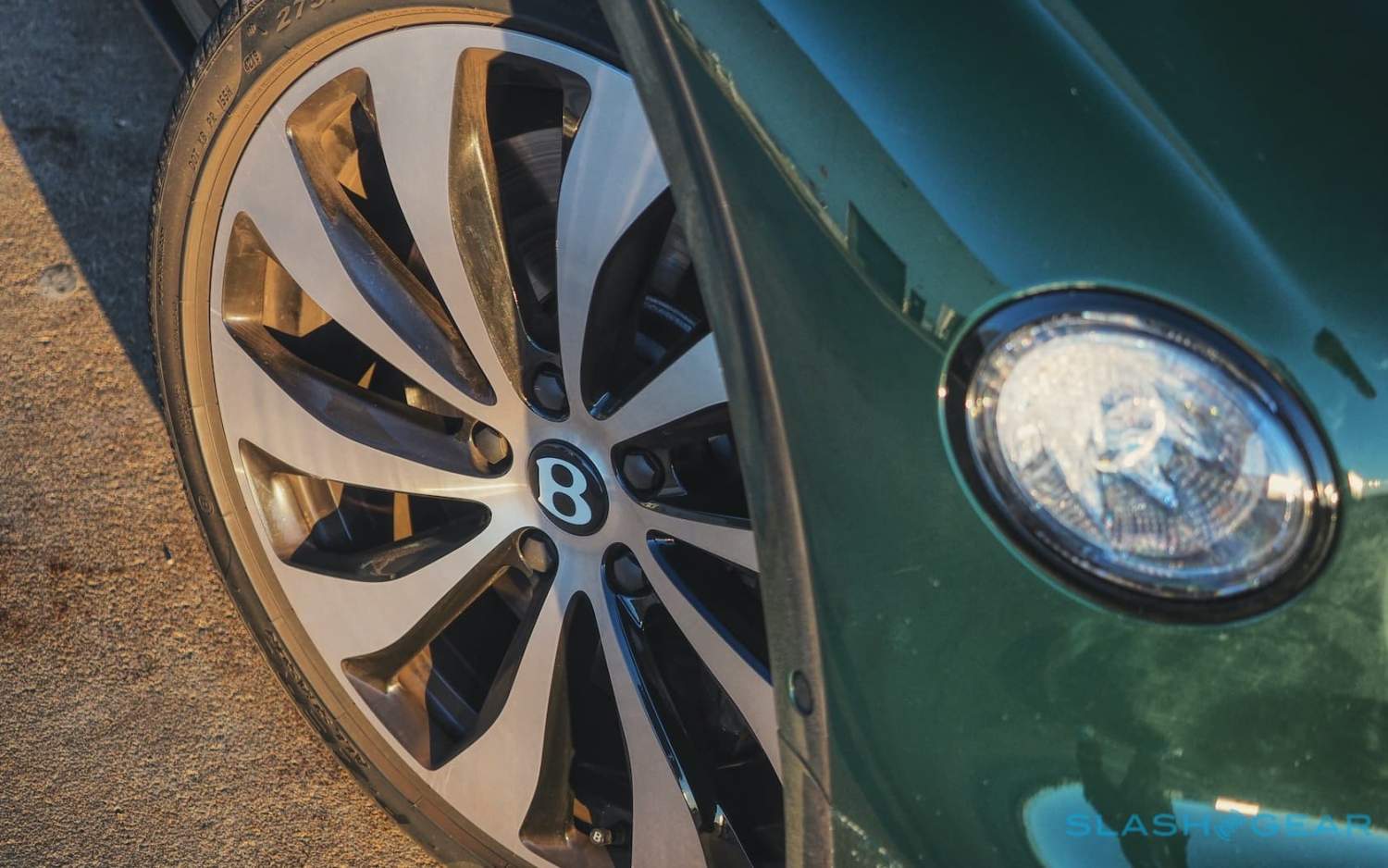 The result is not a compromise but a decision. Bentley’s W12 is a thing of mechanical beauty, and it hurls the big sedan forward in a way that feels more dangerous to the established rules of physics than what happens in the Large Hadron Collider. The Flying Spur V8 may be fractions of a second slower in how it picks up, but once it reaches the corners there’s a little more big cat agility.

The weight dip helps there, unsurprisingly, as does the retuned all-wheel drive. Where the twelve-cylinder’s exhaust note thrums with the barely-restrained fury of a slighted monarch, the V8 is more profligate, more expressive. Its quartet of tailpipes aren’t afraid to bark and howl in comparison. With the larger engine the shock was always how subtly you’d reached three digits on the speedo; the twin-turbo eight-cylinder car likes to remind you that you’re winding up toward the redline. 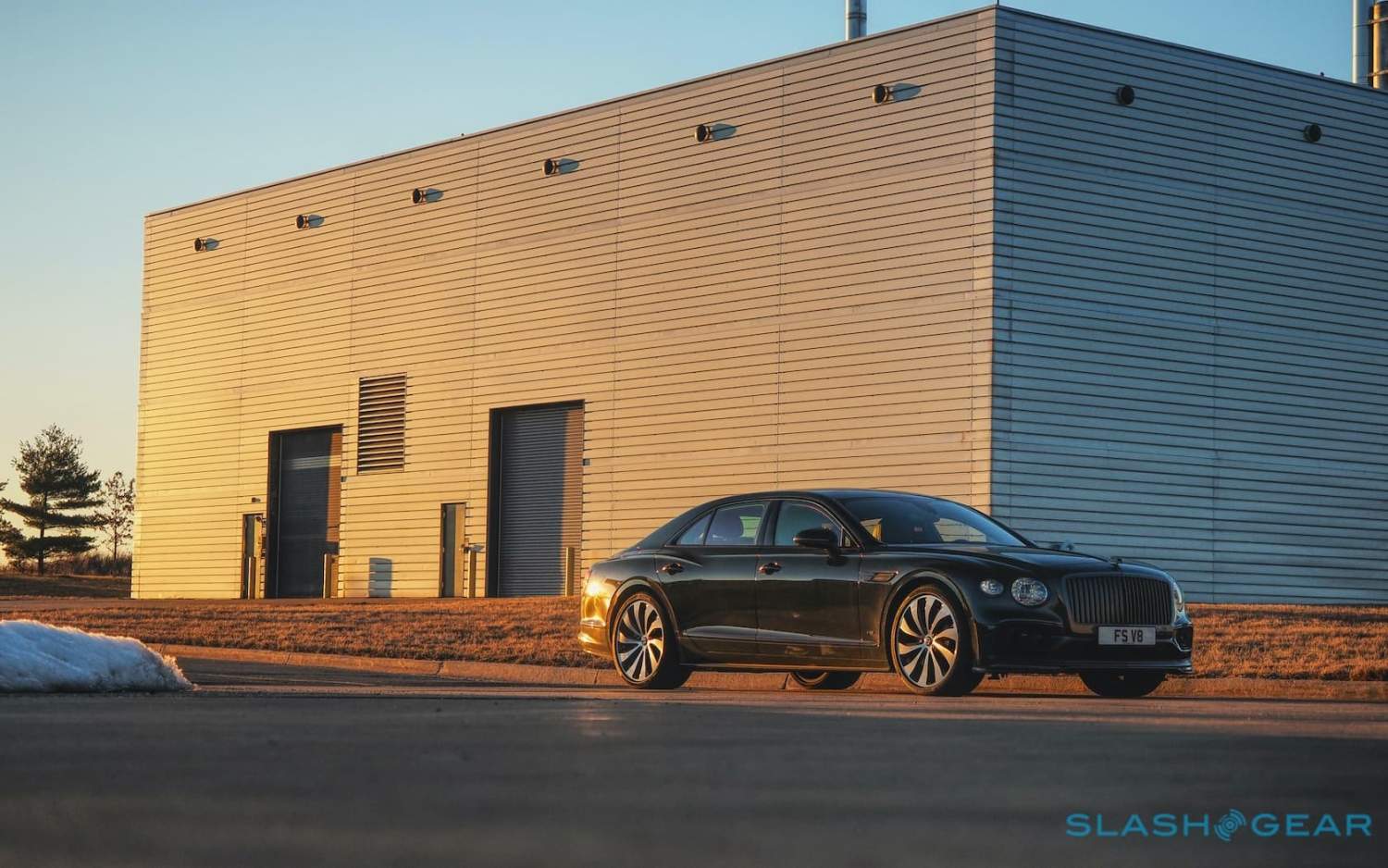 Both share the same eight-speed transmission, slushy when you want it to be, but capable of some perfectly timed, snapshot shifts when you’re pushing hard. Combined with air suspension that glides you over all but the deepest of potholes, and – once you’ve got past the initial reticence and can lean into the engineering – you have the luxury equivalent of a dancer hidden in black tie. 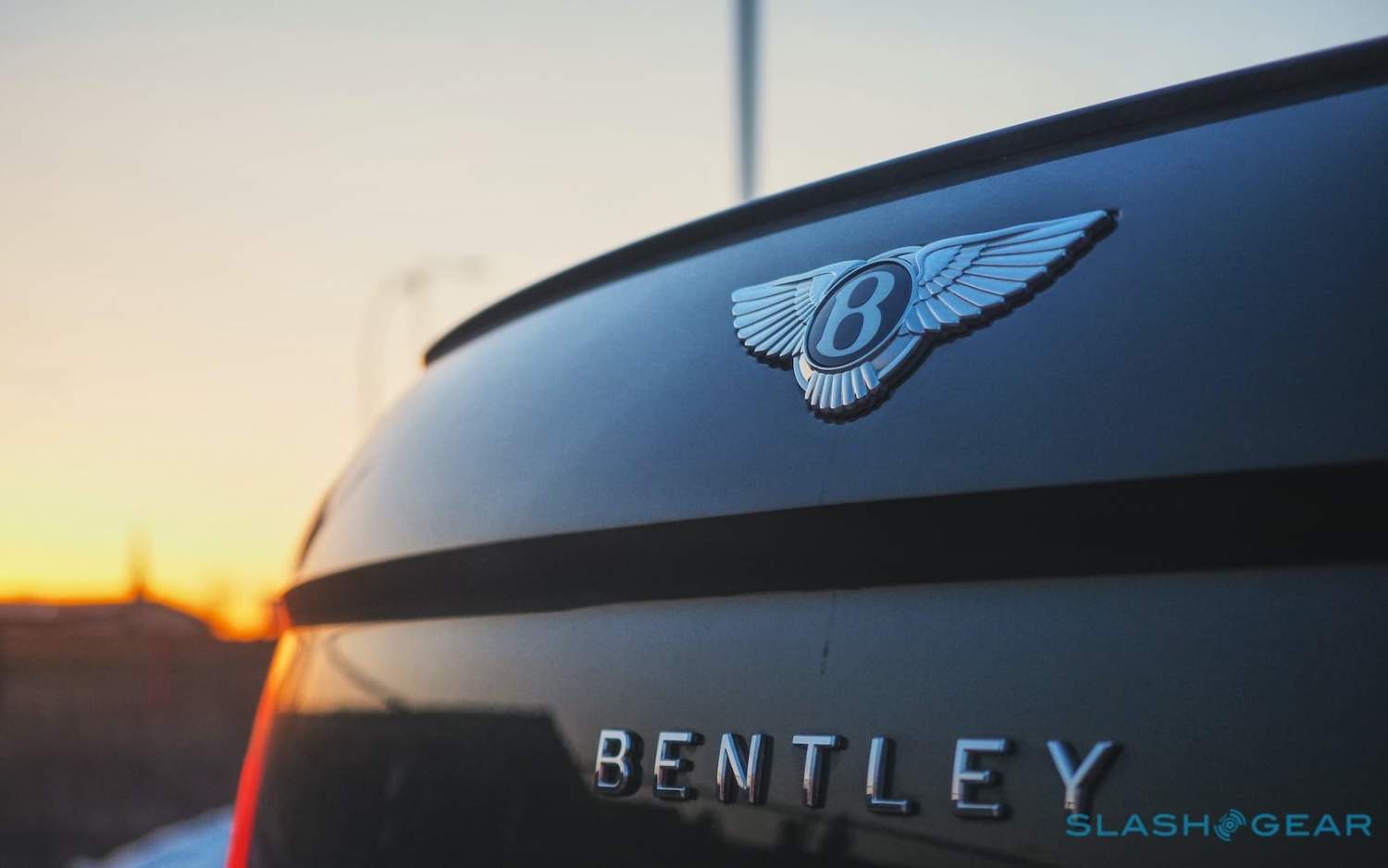 The default drive mode – named, of course, “Bentley” – promises Crewe’s perfect balance of performance and comfort. For the most part they’re right, though twisting the knurled knob to Sport does get you more soundtrack and a little extra urgency. It also coaxes the suspension into more firmness, the result being a head-scratching absence of body roll. At the other extreme, Comfort mode could be marketed as a rear seat sleep-aid, so thoroughly does it dial back the rudeness of the world outside. 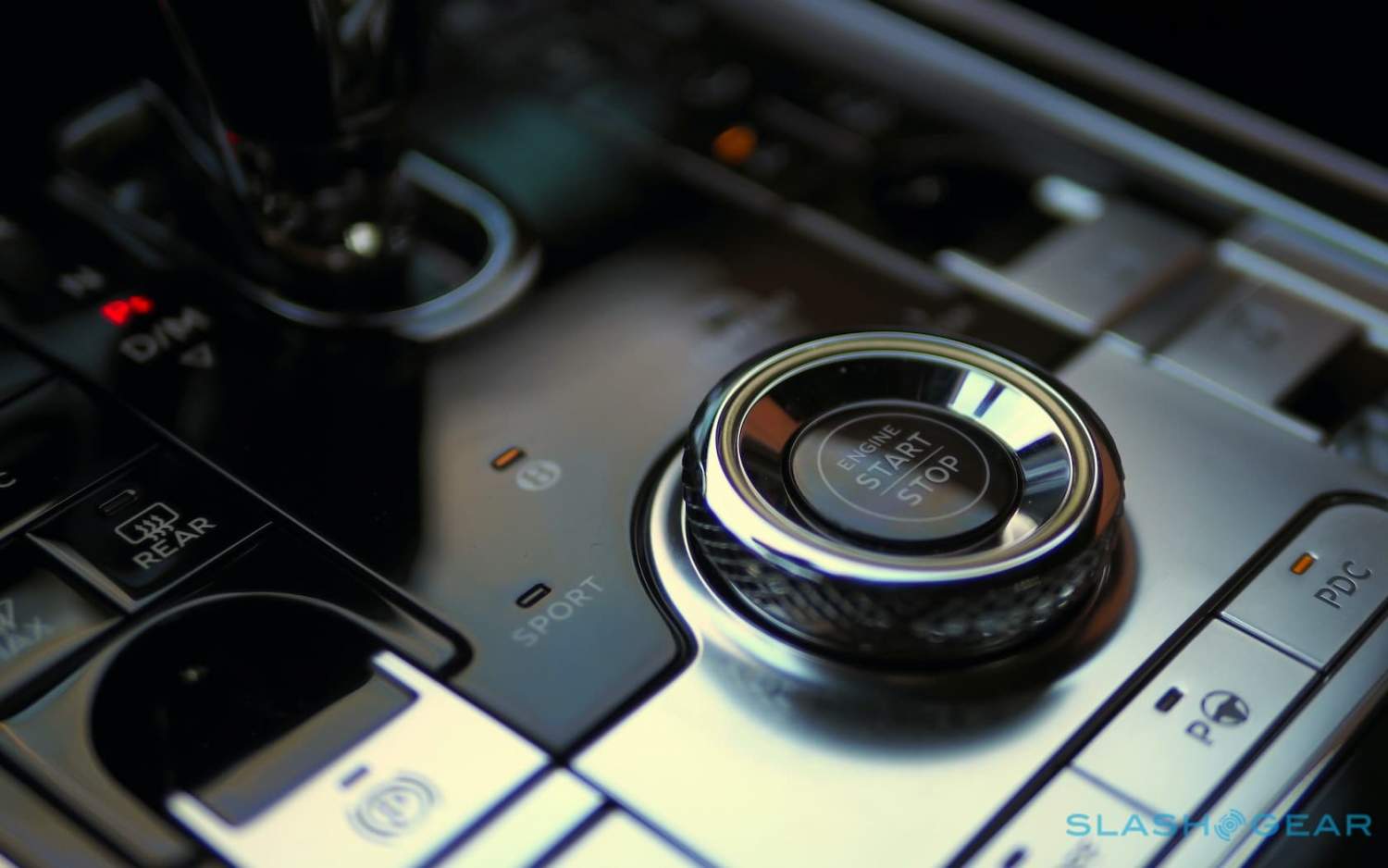 What surprises most of all, however, is how easy the Flying Spur is to live with. It’s a big car, sure, but then an F-150 is a big truck and people park those without problem. I took the Bentley grocery shopping and, while it may have looked like Blenheim Palace had landed among the Fords and Chevys in the parking lot, its trunk is practically capacious. Rest assured, if your car selection criteria is mainly “how much panic-buying of paper towels can I fit?” then the Bentley has you covered.

Four-wheel steering helps make things feel more manageable too, shrinking the turning circle a little. It’s part of the $7,730 Bentley Dynamic Ride package, which also throws in a clever adjustable anti-roll bar which helps give the Flying Spur its dual-personality of taut compliance. 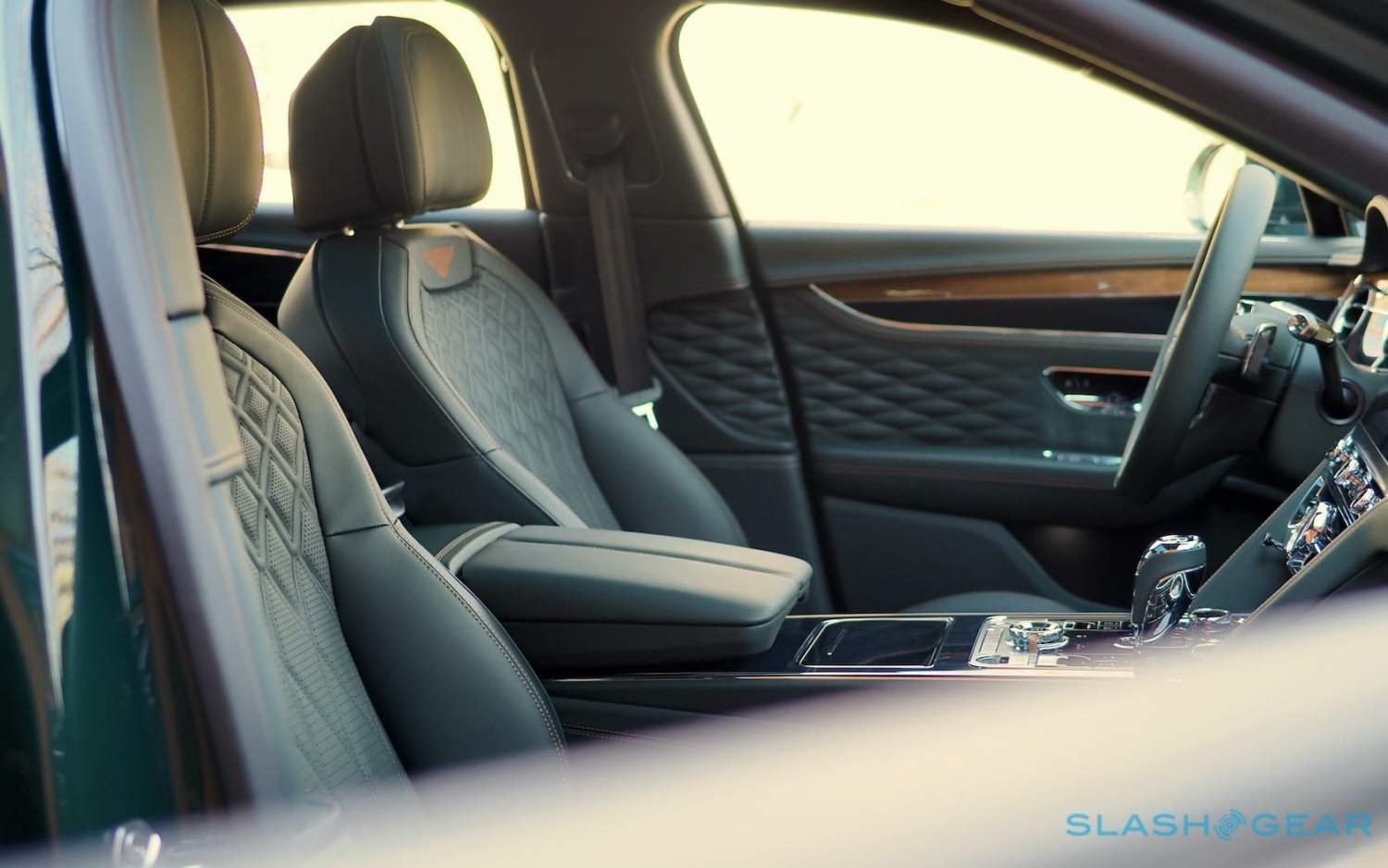 As for the inside, it’s here that Bentley truly shines. When the British automaker retired the Mulsanne last year, the Flying Spur taking over as its flagship sedan, I did have some qualms about whether the lavish attention to detail heaped upon the stately four-door could translate to its newer replacement. Production of the Flying Spur is, after all, an order of magnitude higher: Bentley only made about 500 Mulsanne at most each year, spending considerably longer on the hand-finished wood, leather, and metal of their exceptionally detailed cabins. 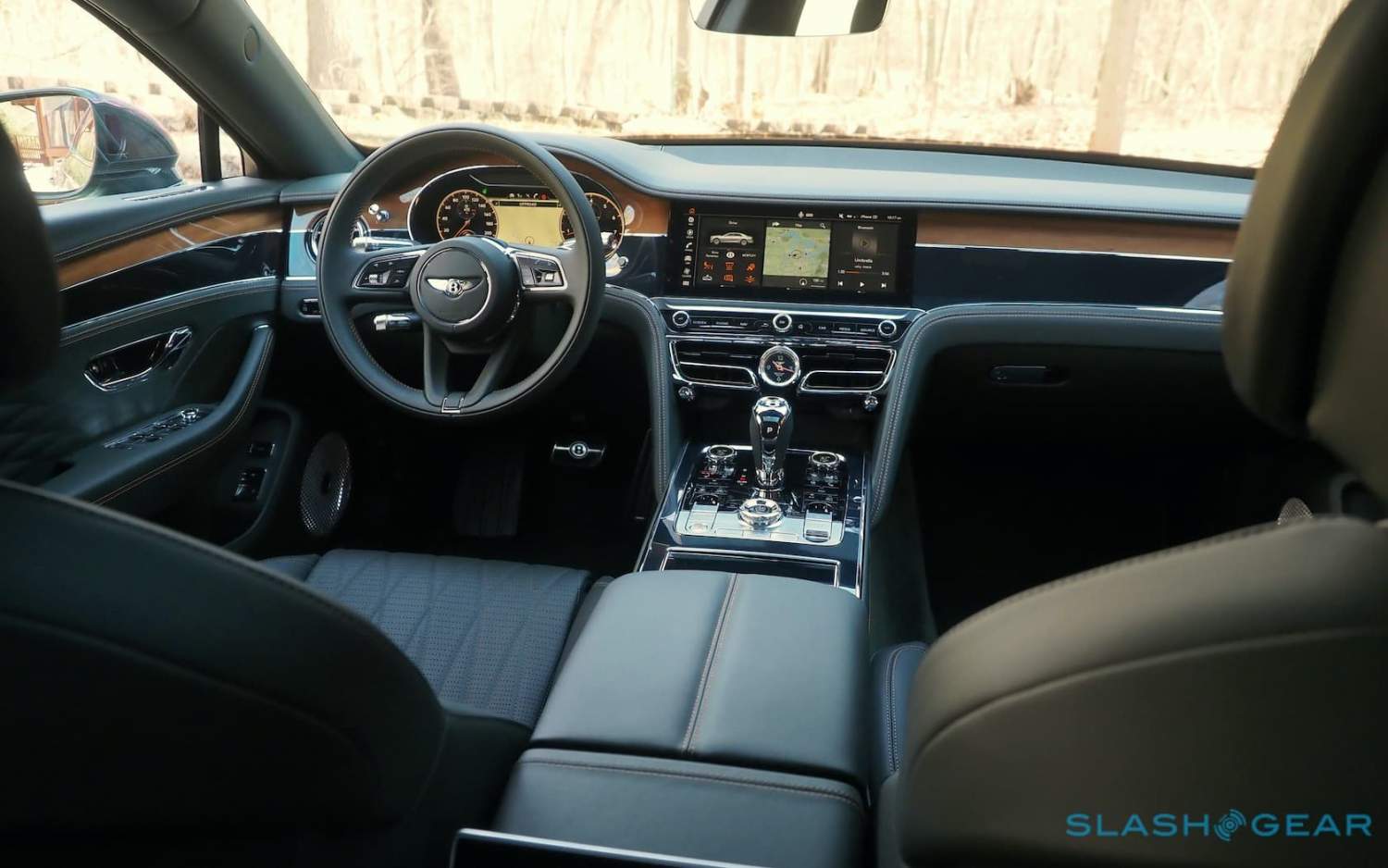 Turns out, I didn’t really need to worry. Bentley may be leaning a little more on its suppliers for the Flying Spur’s parts, rather than trying to do everything in-house, but that hasn’t diluted the standards they’re held to. “While we may not be putting 500 hours into a Flying Spur like we did with Mulsanne,” Hans Holzgartner, Global Product Manager for Flying Spur and formerly Mulsanne explained to me, “we’ve made sure that anything that comes to us as an assembly, that we’ve designed and specced, already has that hand-finished element.”

A good example of that is the Flying Spur’s trick motorized “flying B” which, Holzgartner says, is actually more detailed on the new sedan than the version Bentley used to make itself for the Mulsanne. 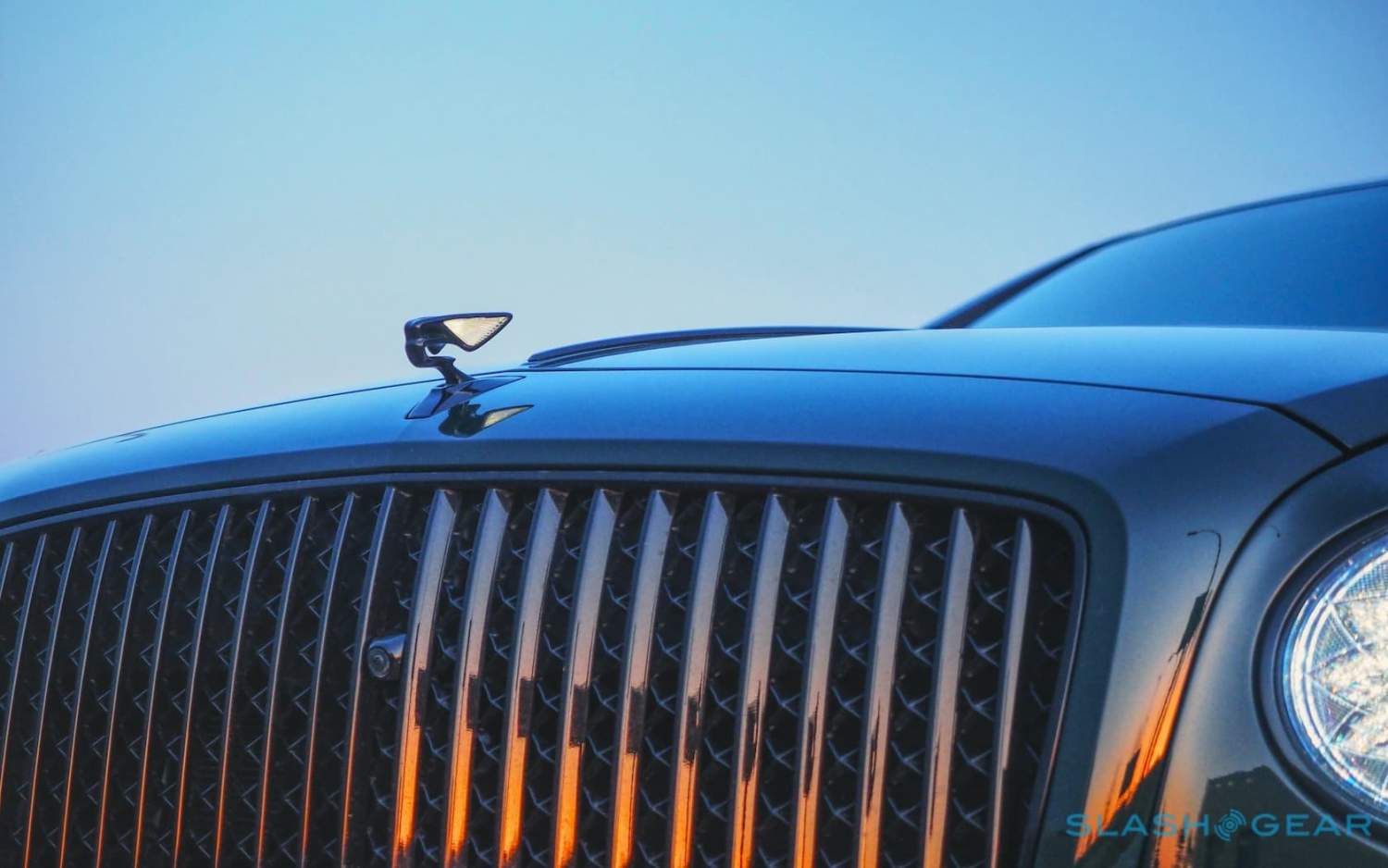 At the same time, Bentley has sensibly cherry-picked from the best of its corporate siblings. For the most part that’s invisible – the Audi-esque switchgear on the steering wheel is the most conspicuous outlier, even if Bentley does relabel the buttons in its own font – and anything from the shared parts-bin is suitably dressed up with more chrome and leather. And at a point where cabin design is seeing a renaissance of sorts in the luxury segment, the Flying Spur continues to set the benchmark. 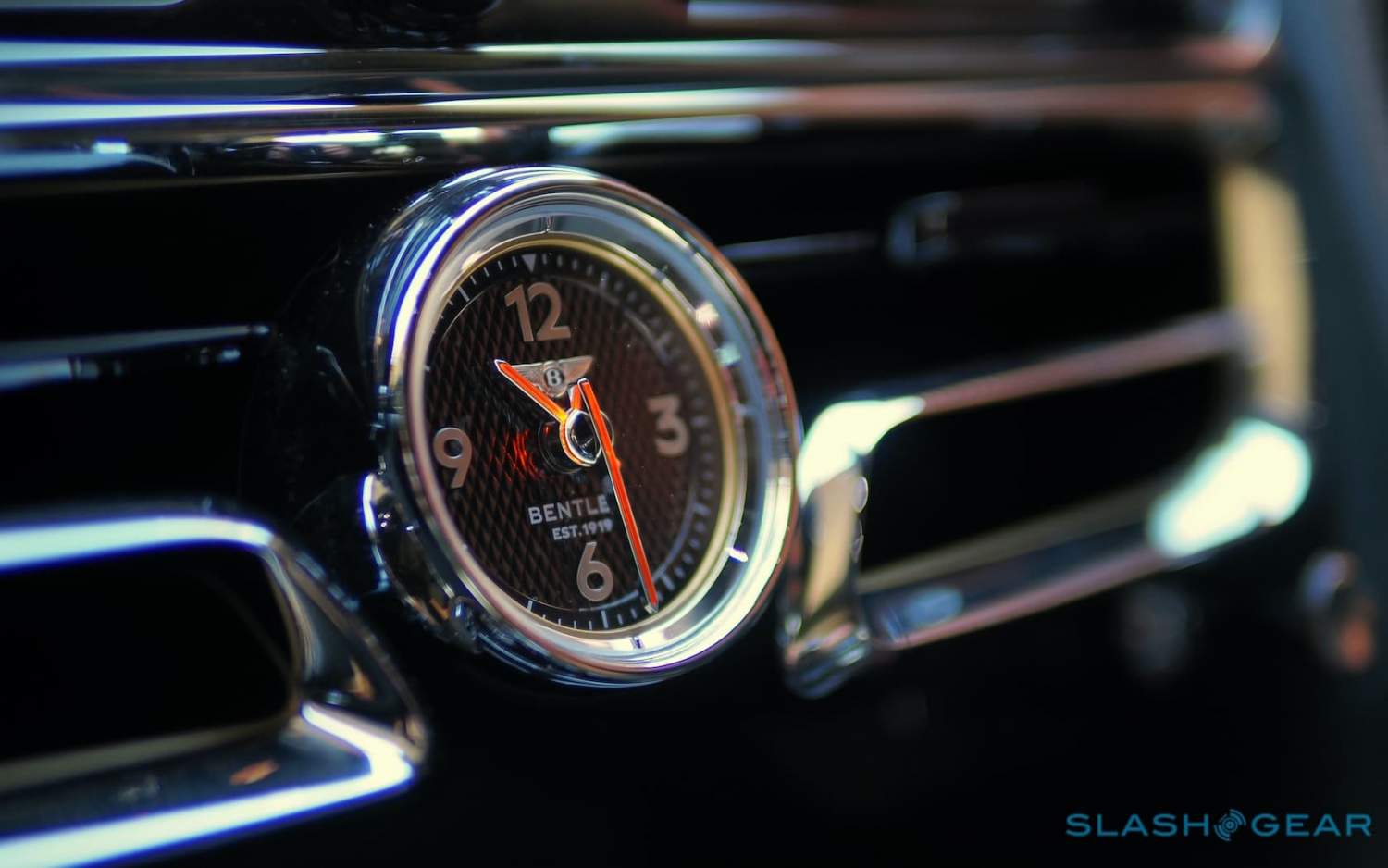 It’s not just the core materials, though they are of course exemplary. Hide so soft, so smooth, so fragrant, you want to press your face into it in some primal cow-communing immersion of the senses. Wood, lacquered bright yet still losing none of the truth of its grain. Bentley’s array of options and its Mulliner team’s willingness to entertain most bespoke requests mean no Flying Spur cabin need look like another. You can go classic, with cream leather and burr walnut veneer, or sportingly moody like the duo-tone crown cut walnut over piano black wood and Cumbrian Green leather of my review car. 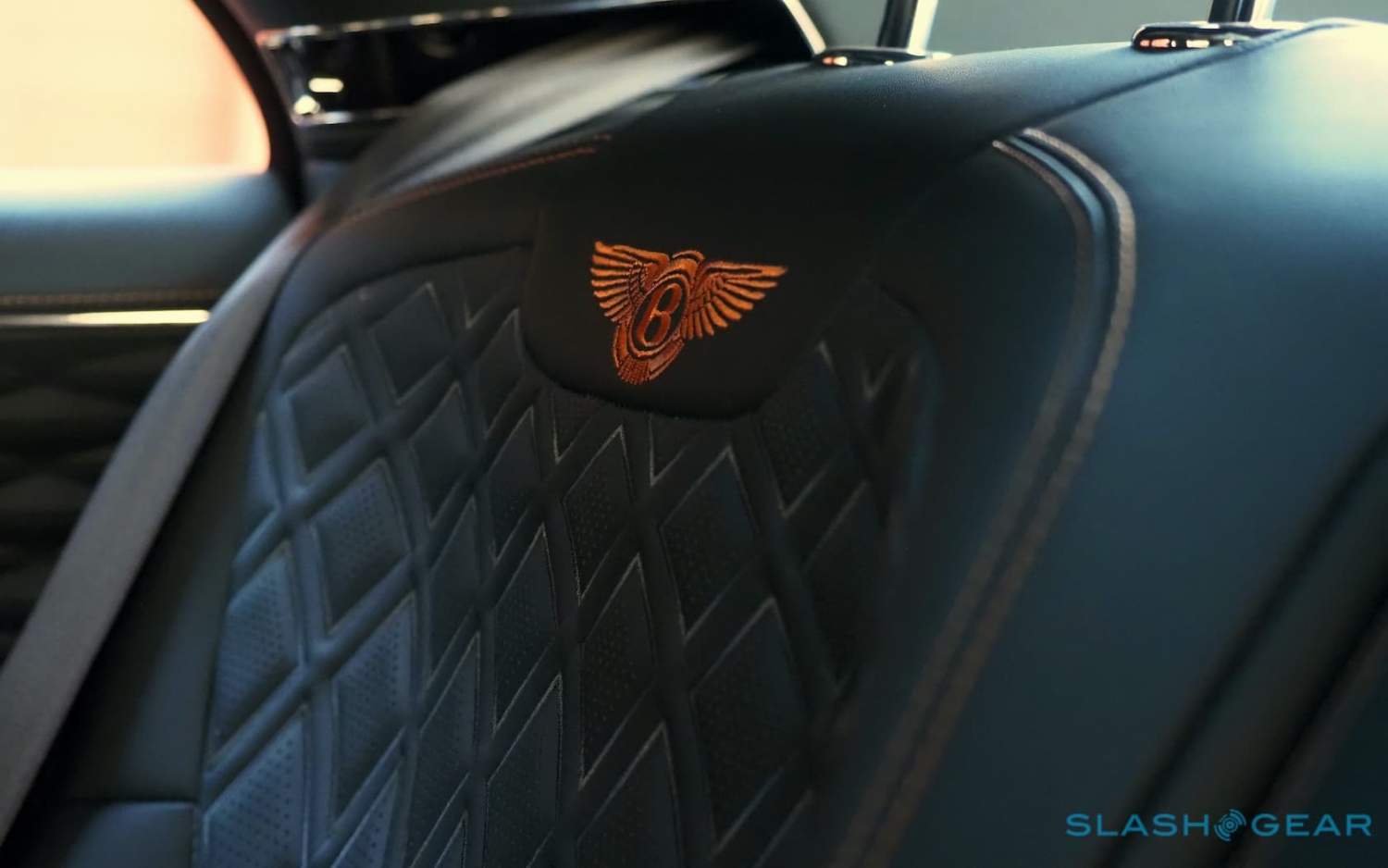 What stands out, though, is the way those materials are used. The diamond double-stitched details on the seats, or the matching embossed leather on the door panels. For the latter, Bentley had to come up with its own leather-working techniques, molding the hide into dozens of crisp peaks. 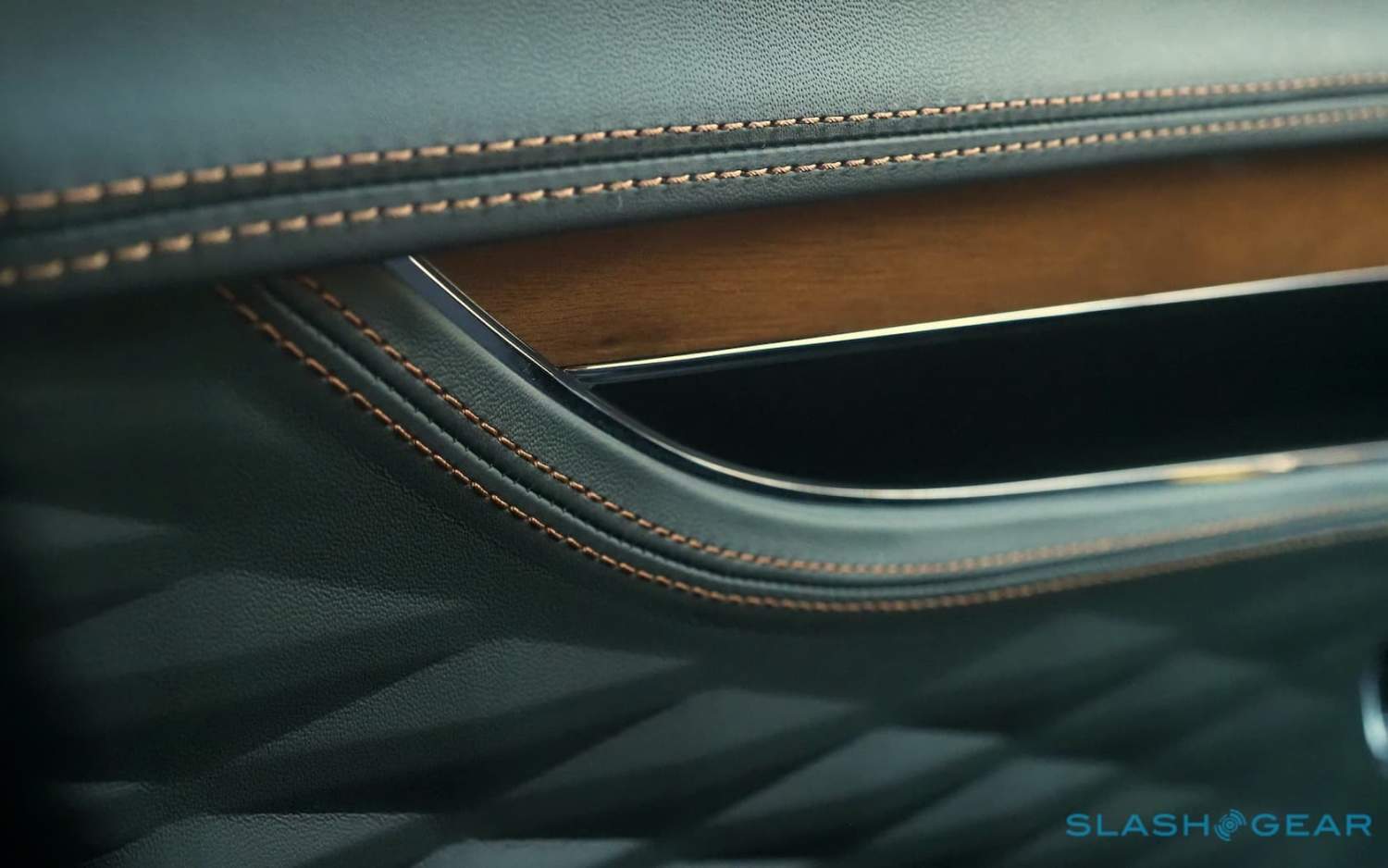 Technology lives among the artisanship. A sizable touchscreen hides behind the trick Bentley Rotating Display – a $6,425 option – with an interface that’s light-years ahead of the old Mulsanne’s homegrown software. Massage seats front and rear, with heating and cooling of course, and a stupendous 19-speaker Naim audio system ($8,880) along with Apple CarPlay and Android Auto, plus a wireless charging pad. Those lucky enough to get chauffeured will find a refrigerator behind the center armrest ($2,440) and a touchscreen to control their creature comforts. 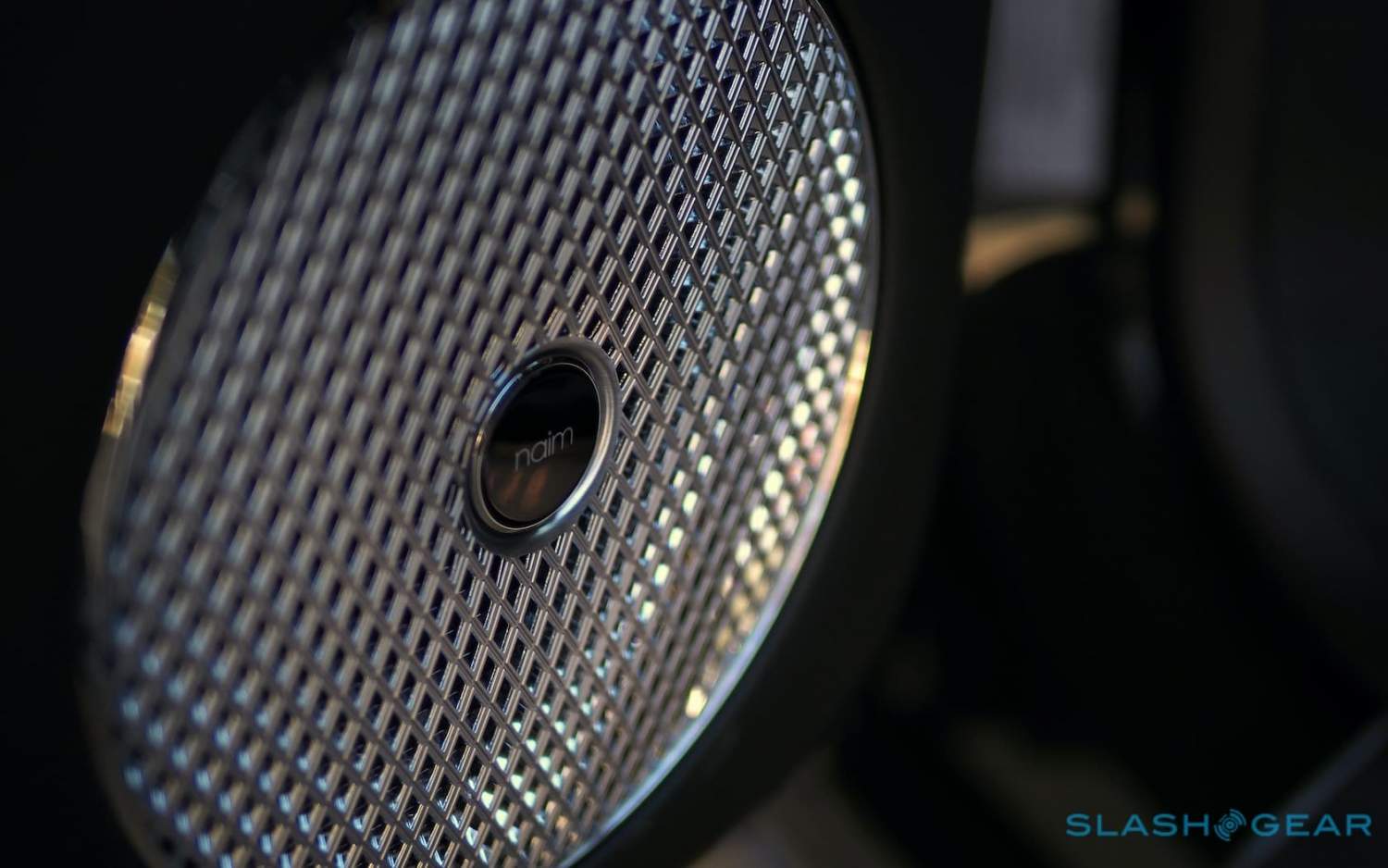 It is a lot, but it is not too much, and there’s never that feeling – as there can be in the gadget-rich cabins of some other flagship luxury cars – that the technology will get in the way of simply driving, and enjoying it. What Bentley opts to include feels curated, with an eye perhaps on the fact that what rolls out of its factory typically spends far, far longer on the road than the lifespan other cars can expect. That may not fully offset the Flying Spur V8’s 17 mpg combined thirst, no, but it lends a timelessness that leaves the sedan feeling less like an asset to be depreciated and more like an heirloom-in-waiting.

Should you – thinking of course both of your driving entertainment today and your lucky children’s inheritance tomorrow – buy the Flying Spur V8 or reach the $22k distance to snag the W12? It’s a decision that, as my mother would deadpan, is “a nice problem to have,” and the reality is that neither is really the better choice, nor the compromised one. 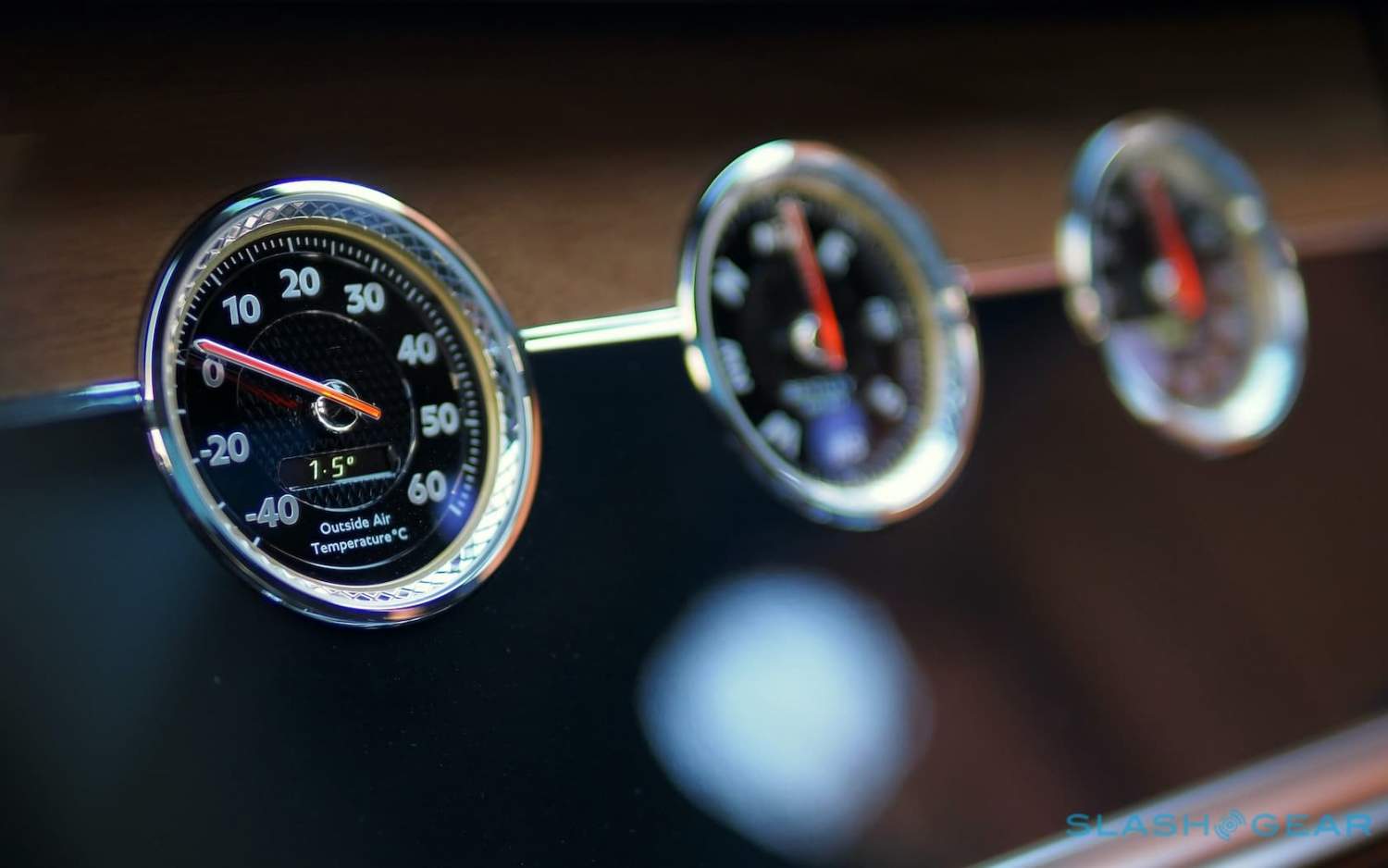 This is not, of course, a new conclusion. The automaker has a track record of offering both W12 and V8 versions of its cars, and the judgment after driving them is invariably the same. The eight-cylinder is lighter but more urgent, more sporting; the twelve-cylinder is the epitome of Bentley itself, all profligate torque and effortless power.

The “epitome” of Bentley is changing, though. The lashings of torque stays but the source of it is different: electrification will increasingly provide that, first with hybrids but, in fewer years than you might think, the first fully-electric car from the brand. And then, a little after that – and really, not that much, in the grand automotive scheme of things – goodbye gasoline altogether. 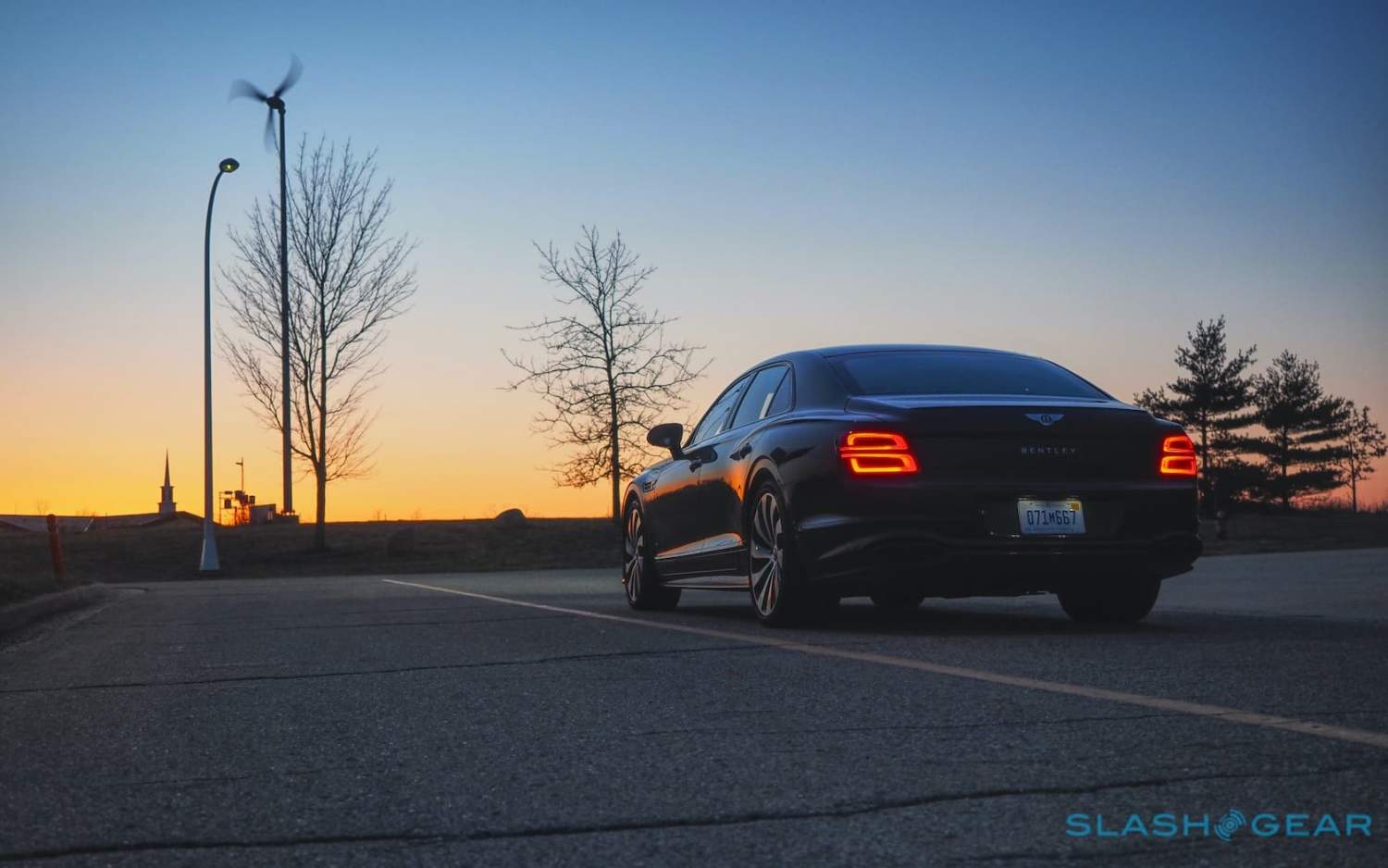 It sounds less like heresy the more you think about it. “An electric Bentley is still a Bentley,” product chief Holzgartner insists, “the characteristics of an electric drivetrain, and how they fit perfectly with a large luxury vehicle like ours. You’ve got bags of low-end torque, you’ve got high levels of refinement. And if you compare that to what we’ve been doing for years, that’s what we’ve done. So to me, the move to electric has never been in doubt, because for Bentley it’s a perfect fit.”

Perfection is subjective. Craftsmanship and attention to detail, though, are more universal. It’s there that the Flying Spur begins to transcend what we expect of a luxury vehicle: even those who don’t care a jot about cars can appreciate the handiwork that goes into the Bentley’s leather, or the history of its wood, or the fact that yes, there is in a factory in the Northwest of England a hall of incredibly talented craftspeople doing sublime things with rarified materials. 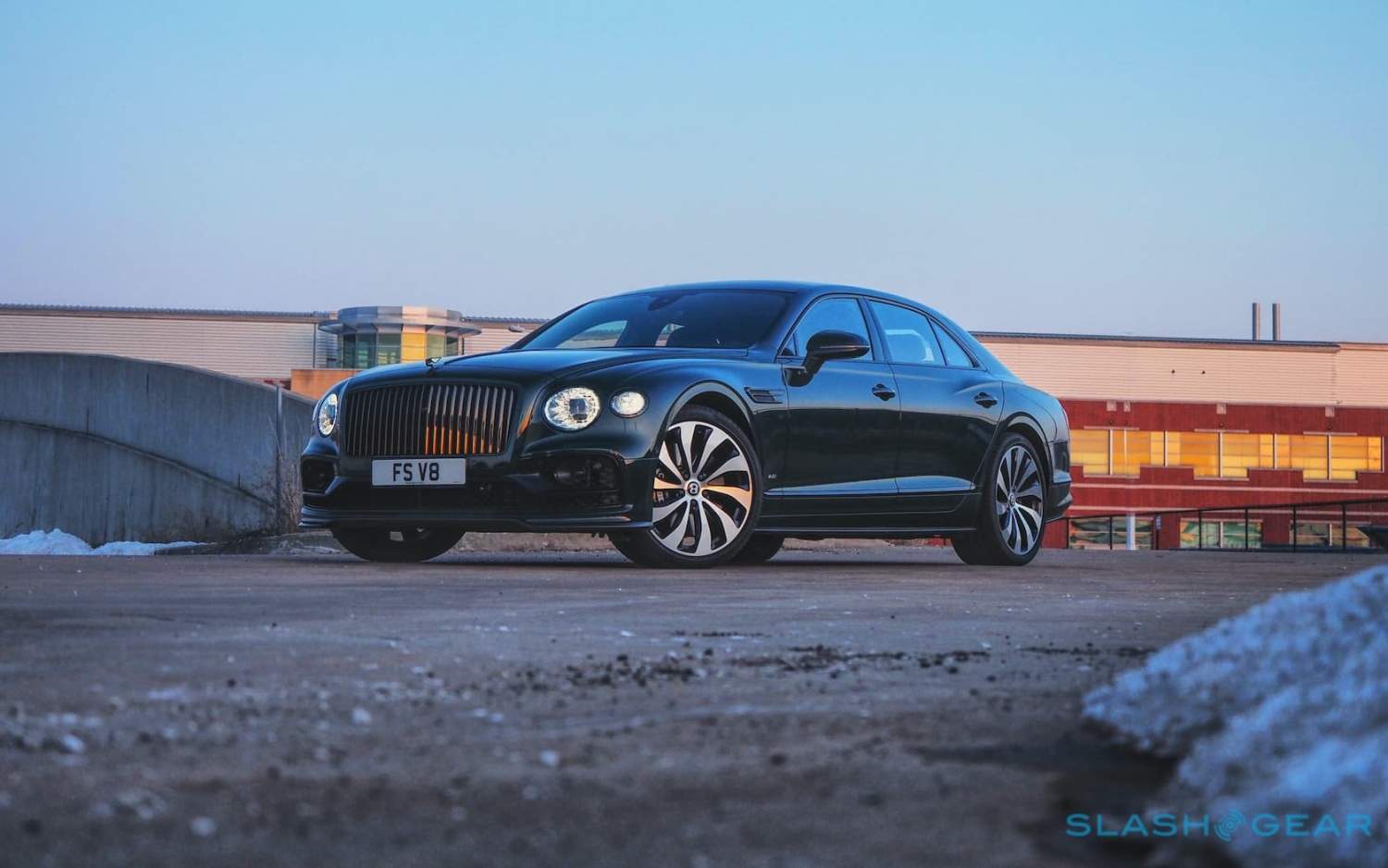 At a time when global uncertainty is an everyday specter, there is clearly something absurd about a $265,000 sedan with 542 horses on tap. I’ll make no excuses for it, nor do anything but highlight that Bentley says its order books are in fact fuller now than they were before the pandemic hit. There is something to be said, perhaps, for the super-rich inadvertently funding the development of cutting-edge electrification that will eventually trickle down to more accessible nameplates across VW Group.

The days of the V8 and the W12 are numbered, and that’s simultaneously sad and exciting. Electrification does suit the Bentley spirit, and the automaker’s eager embrace of it is a reminder that heritage needn’t make you obstinate or reluctant to change. That’s something a fair few other car companies – and car buyers, for that matter – could well learn from. Until then, though the Flying Spur V8 may be among the final hurrahs for this particular engine, it’s one that feels more like a celebration than a wake.