If the definition of madness truly is doing the same thing, over and over again, and expecting a different outcome every time, then perhaps wagon enthusiasts should give up on telling America they’re missing out. Let’s keep, instead, ridiculously fast and oddly practical cars like the Audi RS6 Avant to ourselves, layering exclusivity on top of supercar levels of performance.

Audi doesn’t break RS6 Avant sales numbers out of its quarterly summaries, though it’s probably not unfair to say that it’s likely in the running for the “Most Niche Audi in the US” title. It’s based, of course, on the A6 Avant, that suffix being the automaker’s preferred term for the station wagon. So little interest is there seen for that car among American drivers, Audi only offers two customized versions of it on these shores. 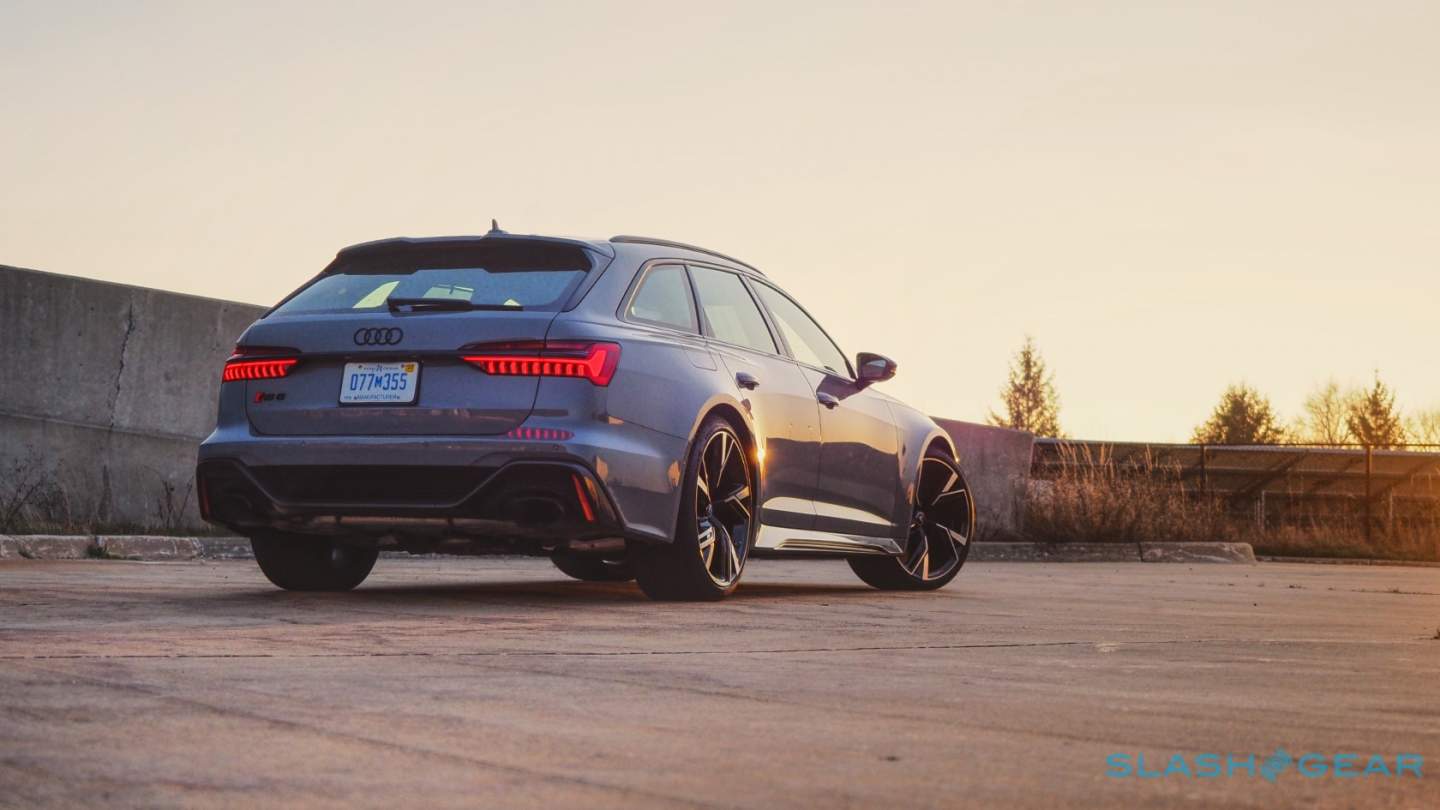 On the one hand, the RS6 Avant is the performance car. Alongside it, the A6 Allroad Quattro applies extra cladding, a bump up in ride height, and makes a compelling alternative to SUVs. Both are classically handsome, in the same way that the lantern-jawed Superman of the comic books is handsome. 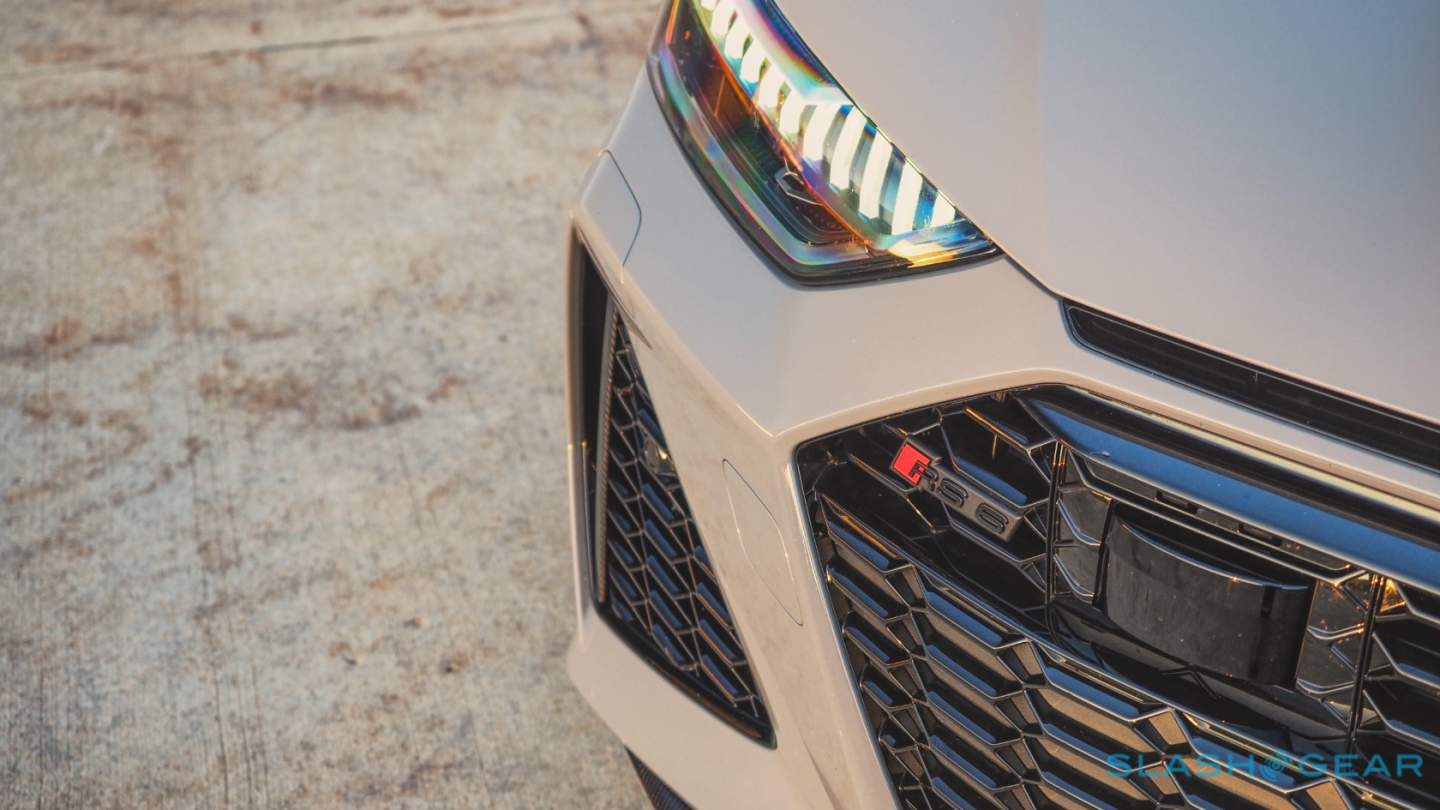 The sizable grille and squinting headlamps have just the right degree of angst; Audi’s inflated wheel arches frame the optional 22-inch alloys – part of the pleasing Black Optic package – beautifully, while the long, lean profile leaves me scratching my head why anyone would pick an SUV over this. That same sense of scale is delivered at the rear, where the distinctively notched LED taillights push eagerly to the edges of the trunk lid, with gloss black trim pieces exaggerating the Avant’s width and its dual oval tailpipes. 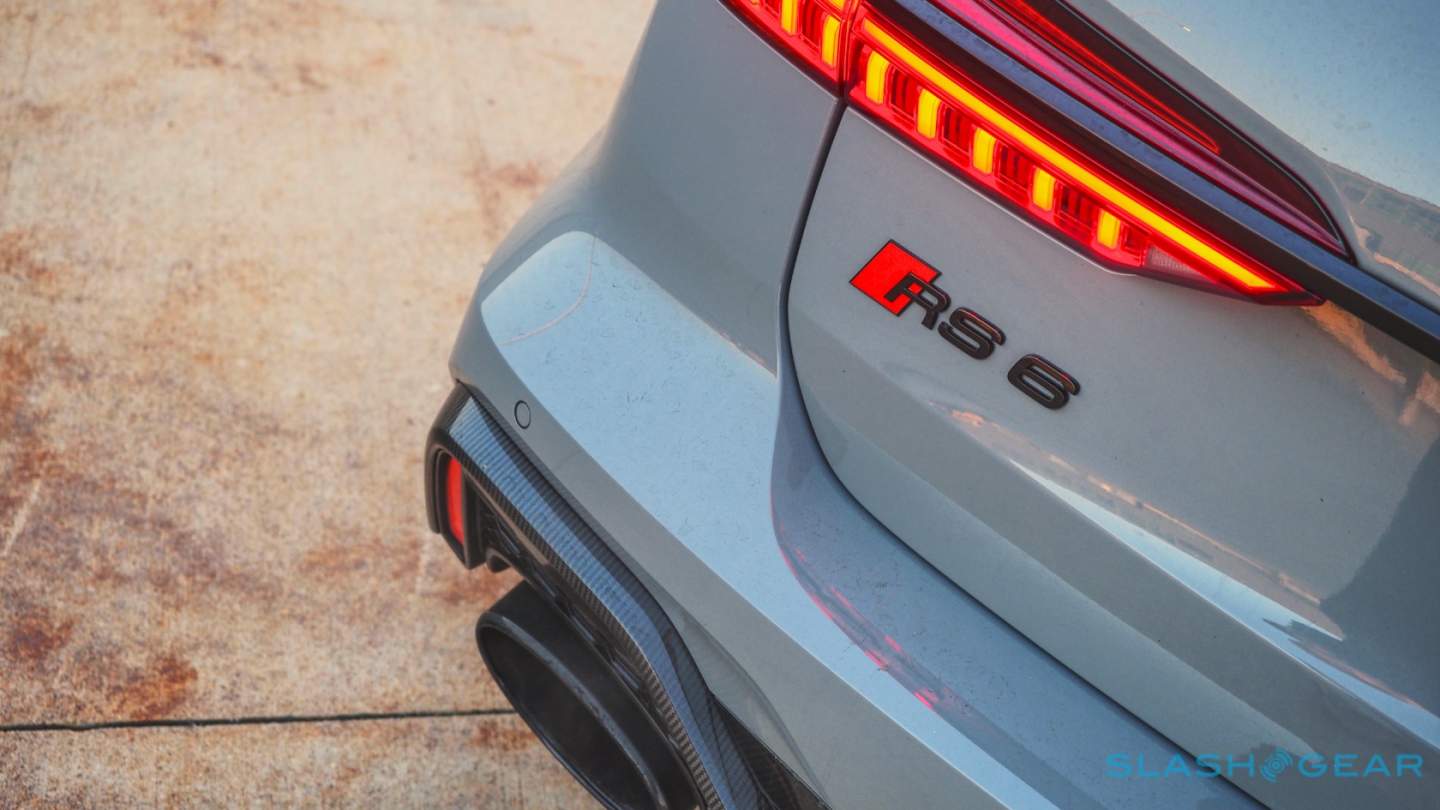 Audi loves to show it off in bright Tango Red, but there’s an elegance to the more subdued hues. Nardo Grey may be a little played-out among the RS line-up at this point, but it’s still deeply flattering to the RS6’s creases and contours. I suspect it’ll age nicely, too, neither obscenely exaggerated nor succumbing to passing trends or fancies.

The same goes for the interior, instantly familiar in the way that all modern Audis have been. Sports seats with fulsome bolstering are standard, as is aluminum and carbon fiber trim. The RS steering wheel and shift knob help add a little distance from a regular A6, but the tech is carried right over: twin touchscreens stacked in the center console for infotainment and HVAC, and a 12.3-inch virtual cockpit display for the driver. 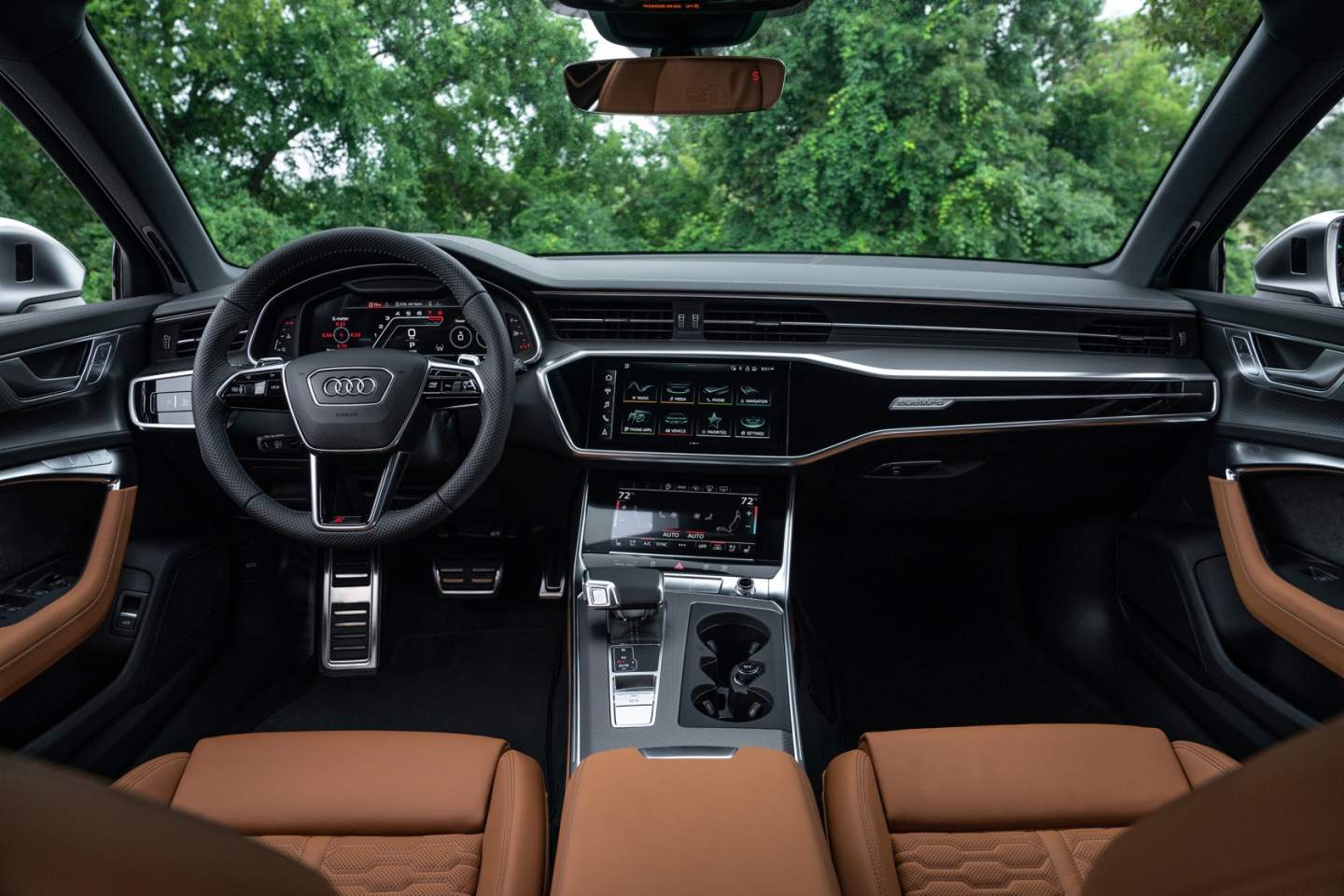 The big difference, mind, is the engine. Audi’s growing e-tron line-up may be pushing electrification, but there’s still a happy place for its stonking 4.0-liter V8 twin-turbo under the RS6 Avant’s straked hood. 591 horsepower and 590 lb-ft of torque are wild numbers for a wagon, comfortably exceeding even Audi’s R8 V10 Performance, though the Avant does of course bring a near-5,000 pound curb weight to the party too. 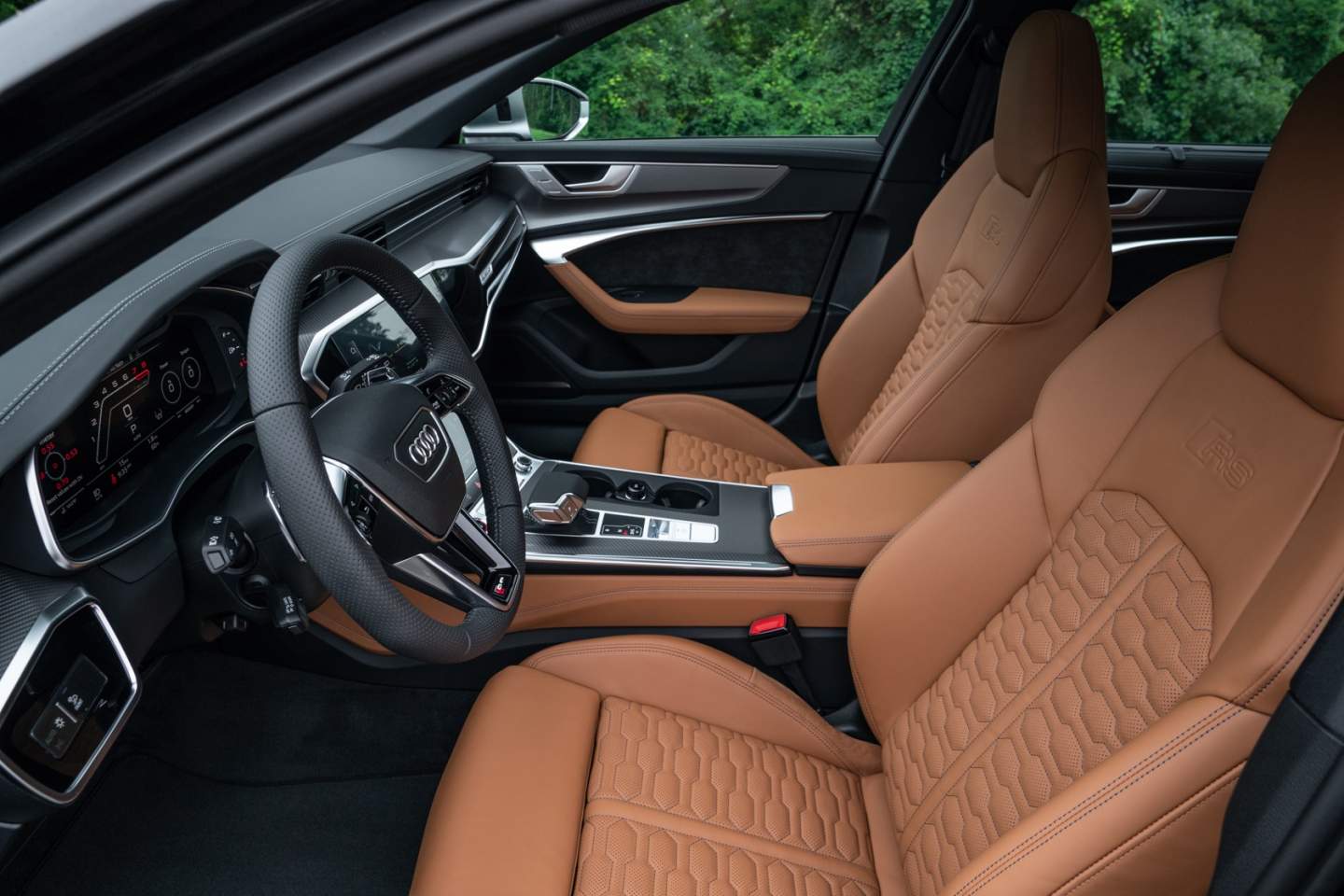 Nonetheless, this is honest to god fast. 0-60 mph in 3.5 seconds, and a top speed of 155 mph. Add the carbon ceramic brakes and, in addition to even stronger stopping power and an $8,500 hit on your wallet, Audi will nudge the limiter up to 190 mph.

That probably makes sense in Germany, with its derestricted roads, but it’s a tougher sell here in the US. The standard brakes are more than up to the task, anyway, reassuringly confident without being grabby. 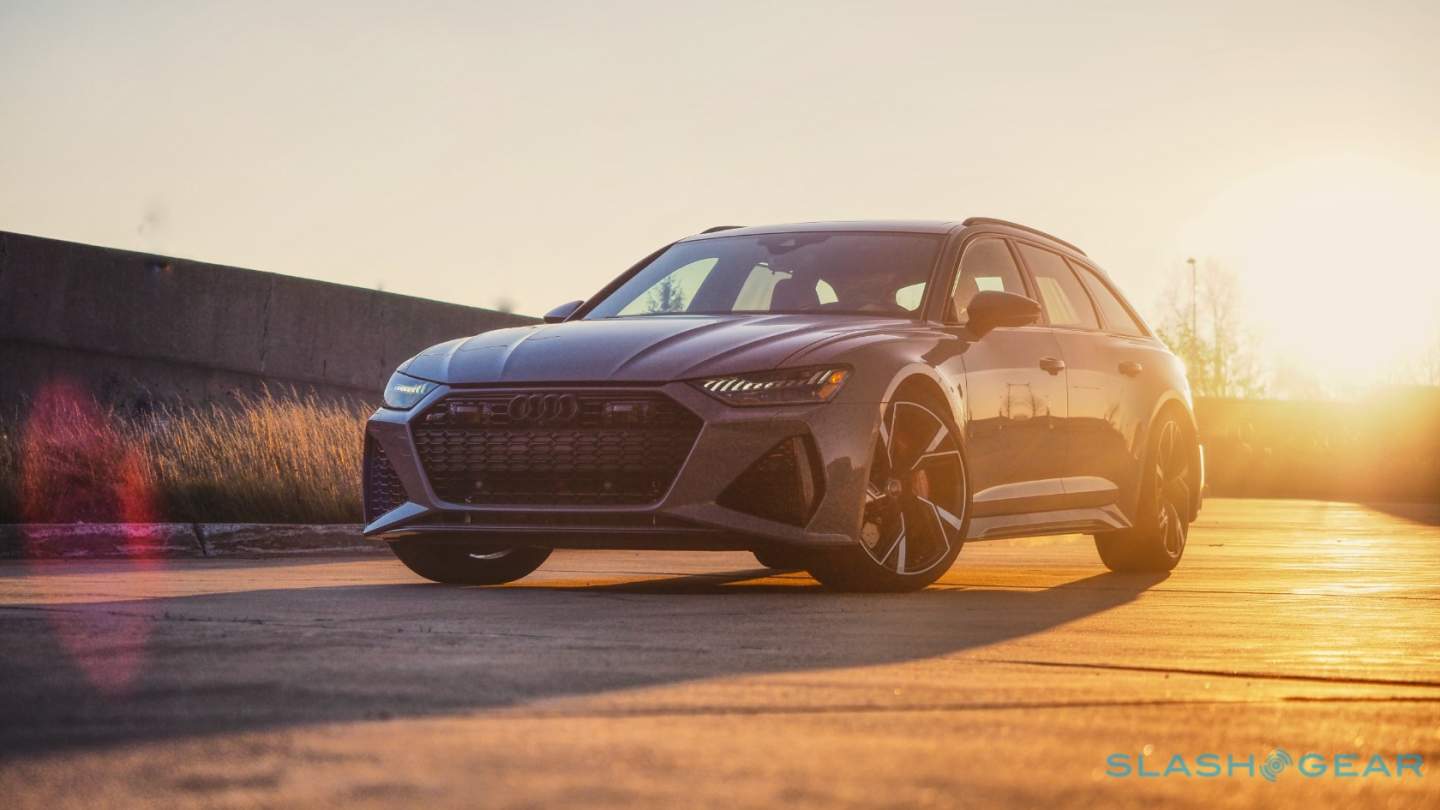 Since we’re bruising physics anyway, the Avant takes no prisoners when it comes to cornering performance. Standard air suspension, adaptive dampers, a torque-vectoring rear differential, and Quattro all-wheel drive work in tandem with Audi’s drive modes system. The usual Comfort, Dynamic, and Auto are present and correct, and joined by two customizable presets that can be summoned with a stab of the RS button on the wheel. 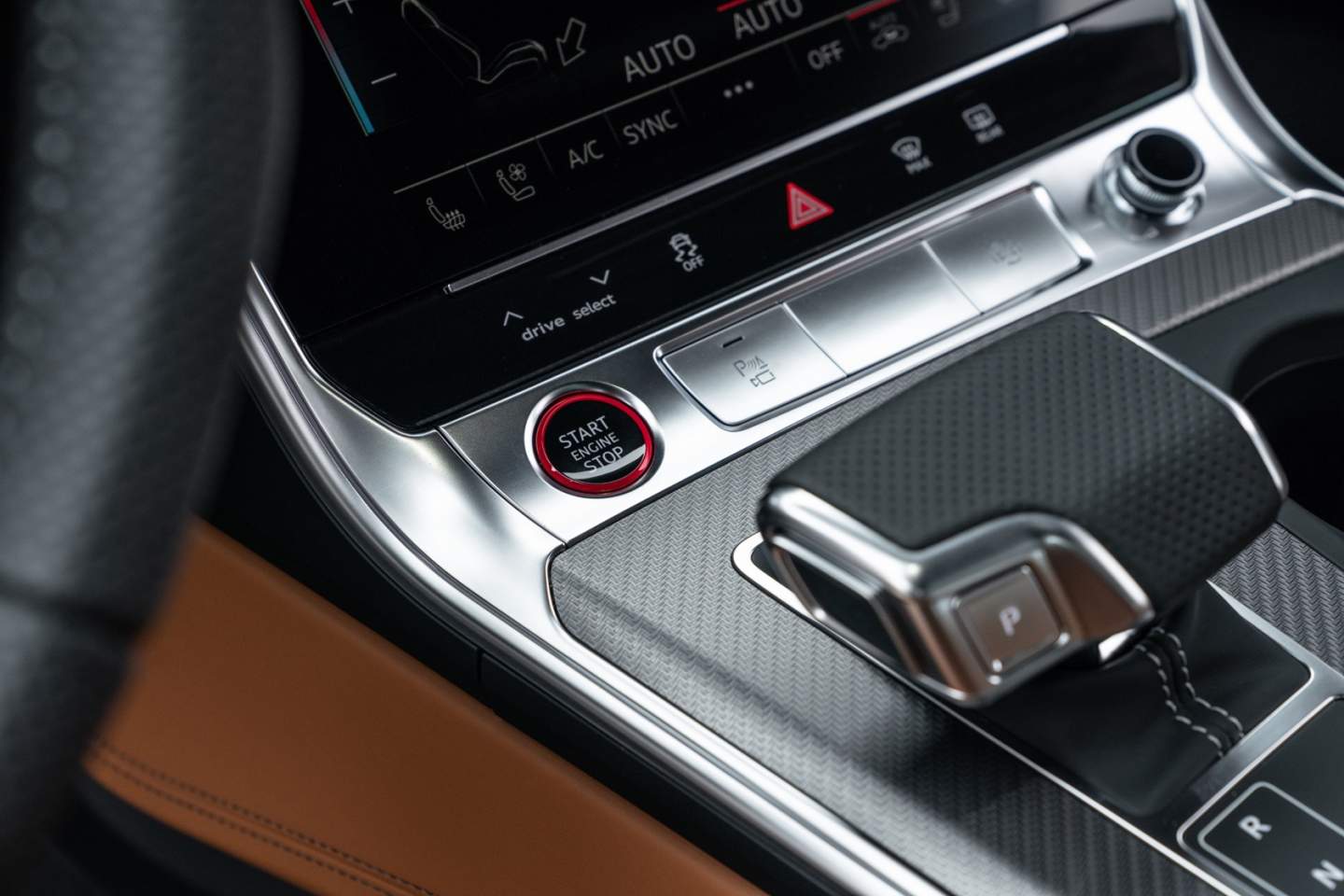 With these tools, you can coax the RS6 Avant between family hauler and race track aspirant with mesmerizing ease. Sure, it’s firmer than the average Audi, even in Comfort mode: the skinny rubber doesn’t do ride any favors, even if it’s not quite the teeth-loosening experience you might expect. All the same, you can merrily use the wagon like, well, a wagon for DIY runs and impromptu Costco hauls. 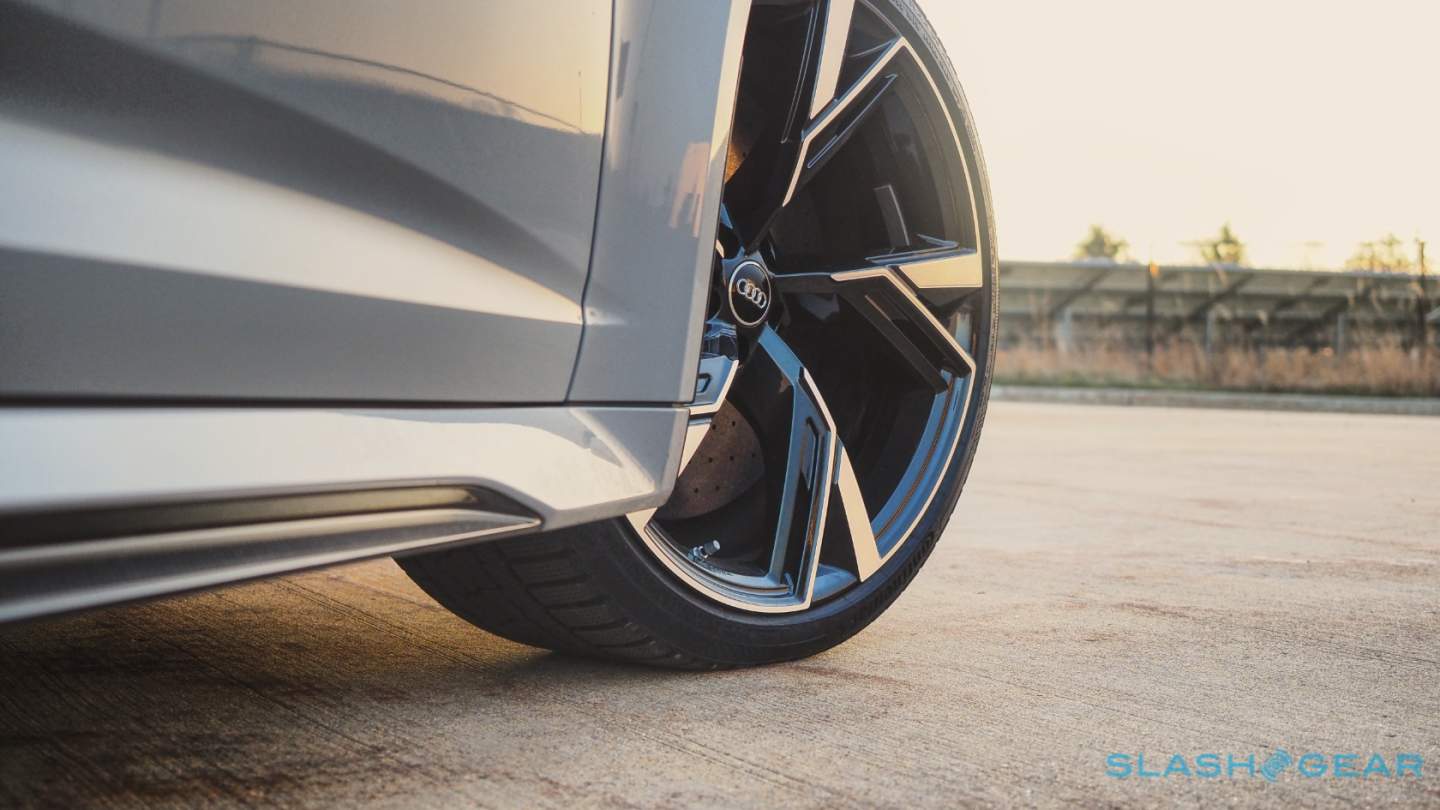 Ditch the bulk paper towels, mulch, and preferably any passengers too, and Dynamic mode morphs the RS6 Avant in a snarling monster. Straight-line acceleration is organ-adjusting; corners are tackled with a flat confidence that two-seater sports cars could take lessons from. You never quite lose the sense of general scale, particularly when it comes to the wagon’s width, but then you never feel like you’re approaching the Audi’s limits, either.

That’s a blessing and a curse, perhaps. Something so intensely capable can end up feeling wasted on public roads, yet I can’t see many from that already-small list of RS6 Avant owners choosing to take their wunder-wagon to a track day. Even a brief lapse in caution can have you hurtling to speeds where – should the wrong speed trap be looking your way – your license becomes instant confetti. 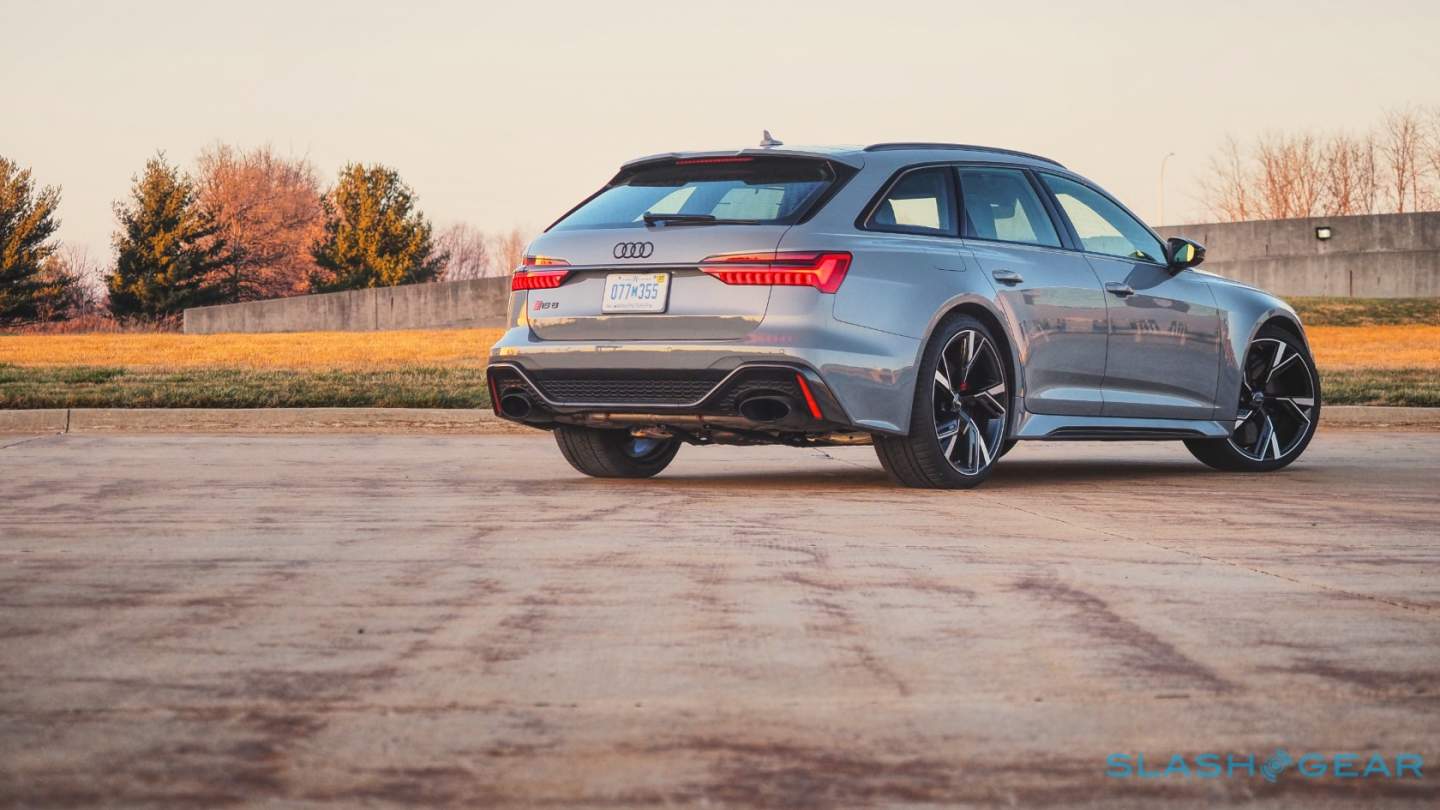 It’s a problem that the Audi’s potent rivals – cars like the Porsche Panamera Turbo S Sport Turismo, for example – run up against, too. Big power numbers that are more commonly used for bragging rights than actually going anywhere fast. The RS6 Avant does, at least, have more cargo space – 59.3 cu-ft with the split rear seats folded, or 30 cu-ft with them up – than the Porsche. 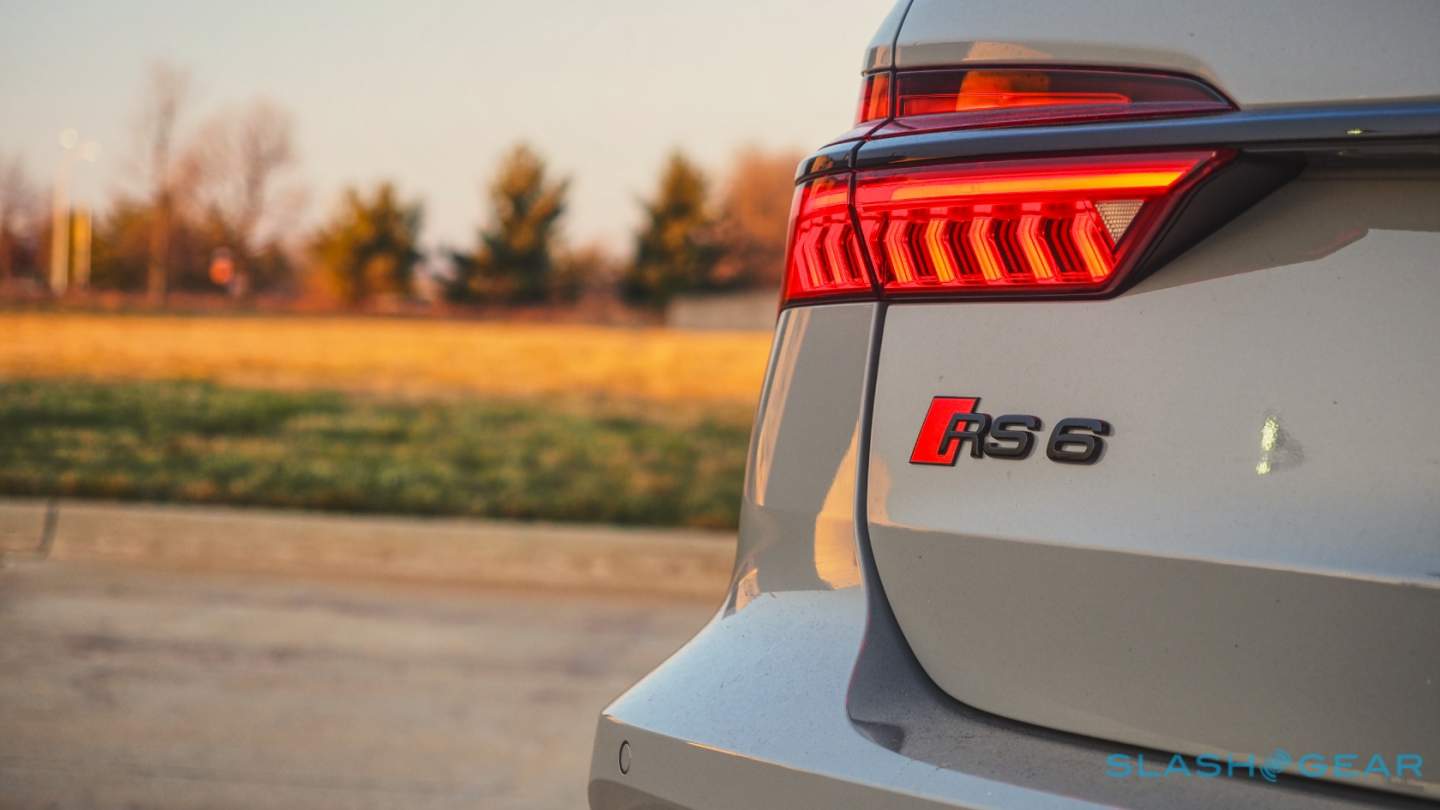 Resign yourself to there being levels of Audi Sport profligacy that are out of sensible reach, though, and there’s so much to love about the RS6 Avant. The rear-wheel steering – standard fit – bumps up practicality too, as well as aiding in that sense of extreme stability even at speed. It sounds glorious, bellowing and snorting, and the eight-speed Tiptronic gearbox is Teutonically blunt about the fact that it’s far, far more adept than you are at switching ratios. 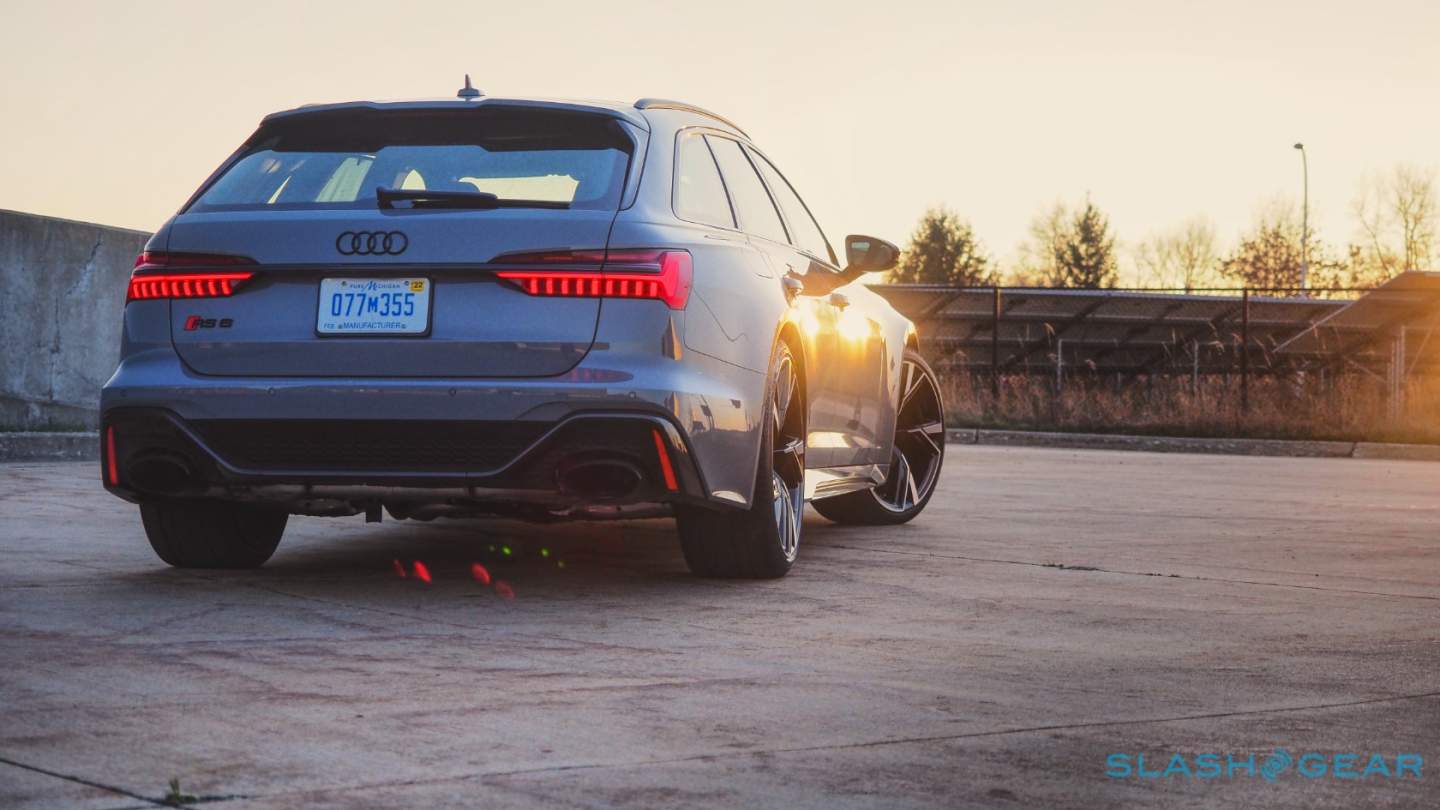 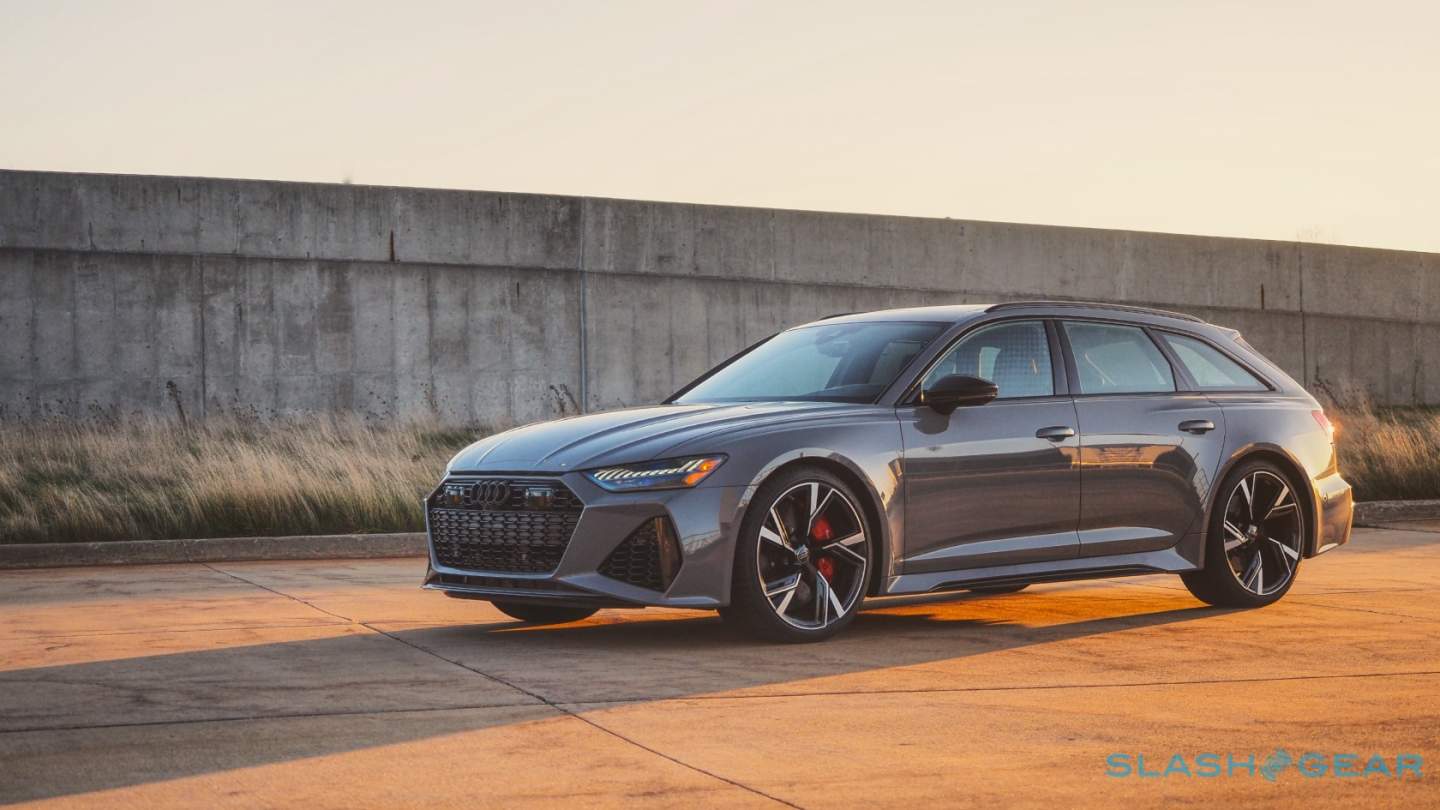 Audi’s decision to bring the RS6 Avant to the US was a surprising one. After years of it pointing out that American drivers don’t buy wagons, certainly don’t buy sports wagons, and that the market shift to SUVs was far more sensible, the fact that you can buy this car at all seems astonishing.

While that exclusivity is compelling, it’s the RS6 Avant’s sense of flexibility that lingers. Cars that can take on exotics at the lights – or at the track – and yet also handle cross-country jaunts or Big Box Store indulgences are rare. You’d forgive the Audi if it struggled to be, well, a wagon, then, and yet its fiery performance only adds to that, rather than diluting it.