There are only so many times you can tell someone they should buy a wagon, then see them park a new SUV on their driveway, before you start to question your sanity. America’s wholehearted embrace of trucks, SUVs, and crossovers has done a shockingly efficient job of squeezing out the humble wagon from consideration. Audi’s strategy with the 2020 A6 Allroad, then, is to make its wagon anything but humble.

Like the Volvo V90 Cross Country and Mercedes-Benz E450 4MATIC All-Terrain, the Allroad strategy is part prestige mixed with a little of the old razzle-dazzle. “This is not your grandparents wagon,” Audi says, waving its hands in front of your face like a stage hypnotist. “This is a lower, sleeker SUV.” 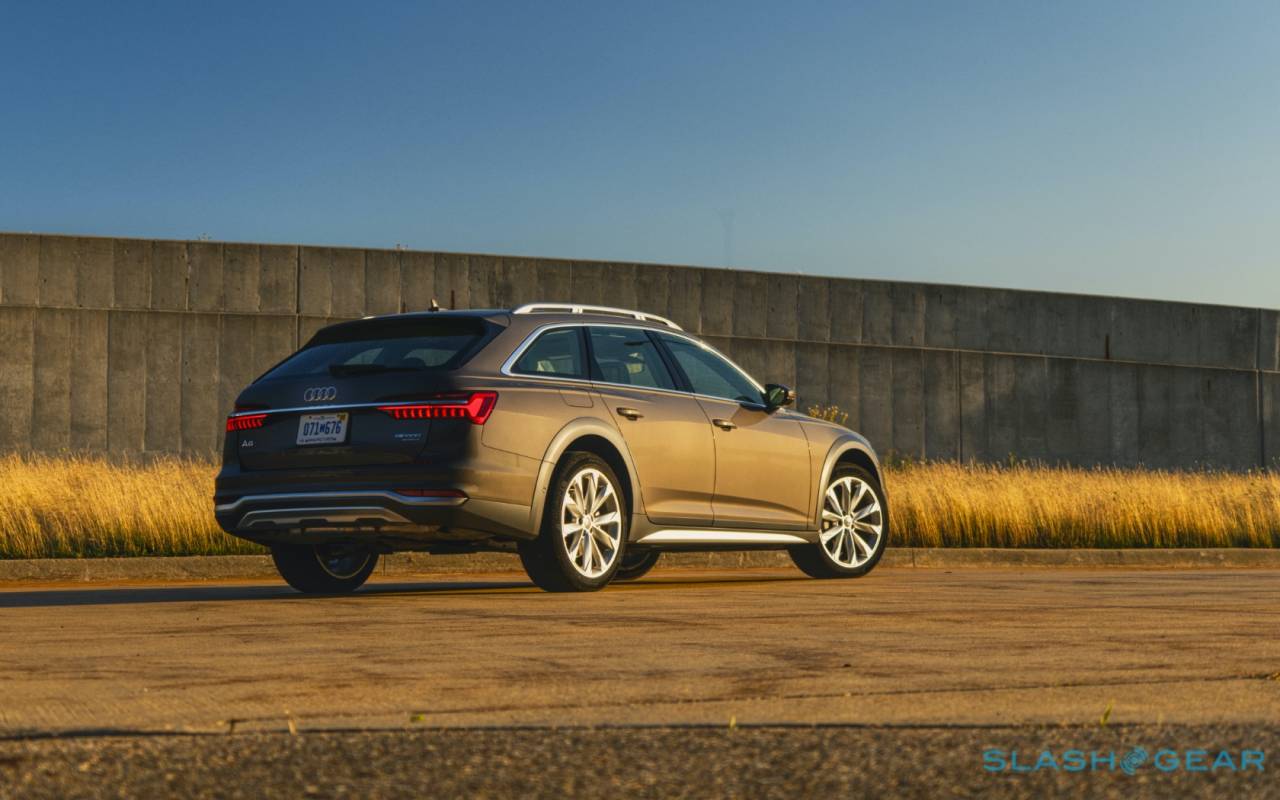 It’s not an entirely facetious claim. Compared to the A6 Avant wagon, which Audi sells plenty of in Europe, the A6 Allroad rides higher and gets beefier cladding. Standard adaptive air suspension can lift it up to 1.8 inches over the regular ride height, and there are off-road niceties like hill descent control and optional dynamic all-wheel steering for maneuvering through tighter spots. 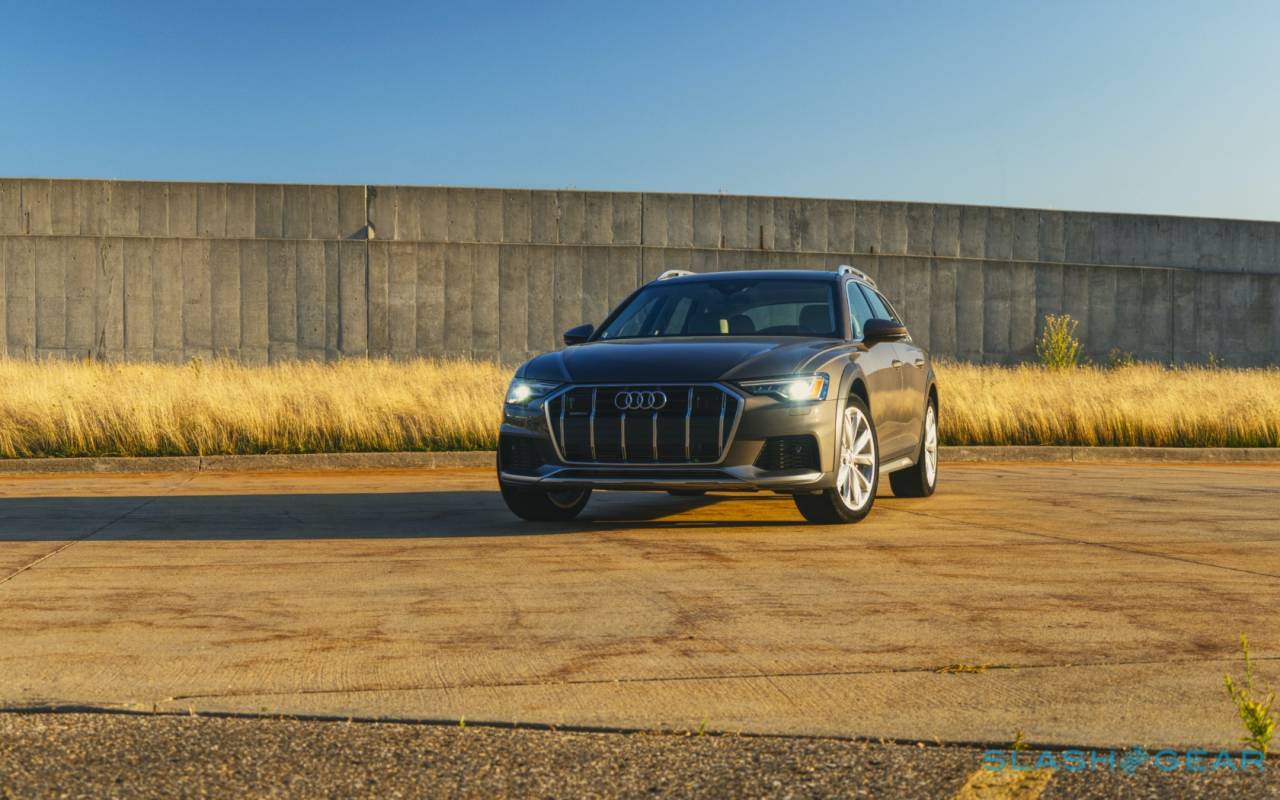 The reality, of course, is that most SUV owners don’t take their vehicles off-road either. Audi’s styling exercise, then, plays an above-average role in sealing the deal, and to my eyes does so handsomely. The wider grille with its chromed vertical slats, Matrix-design LED lights, and aluminum trim panels emphasize the A6’s already-successful curves and slashes; the 20-inch 10-spoke wheels trade a little of the delicacy we’ve seen on recent Audi performance models in favor of a more reassuring heft. The Allroad clads them in all-season rubber by default. 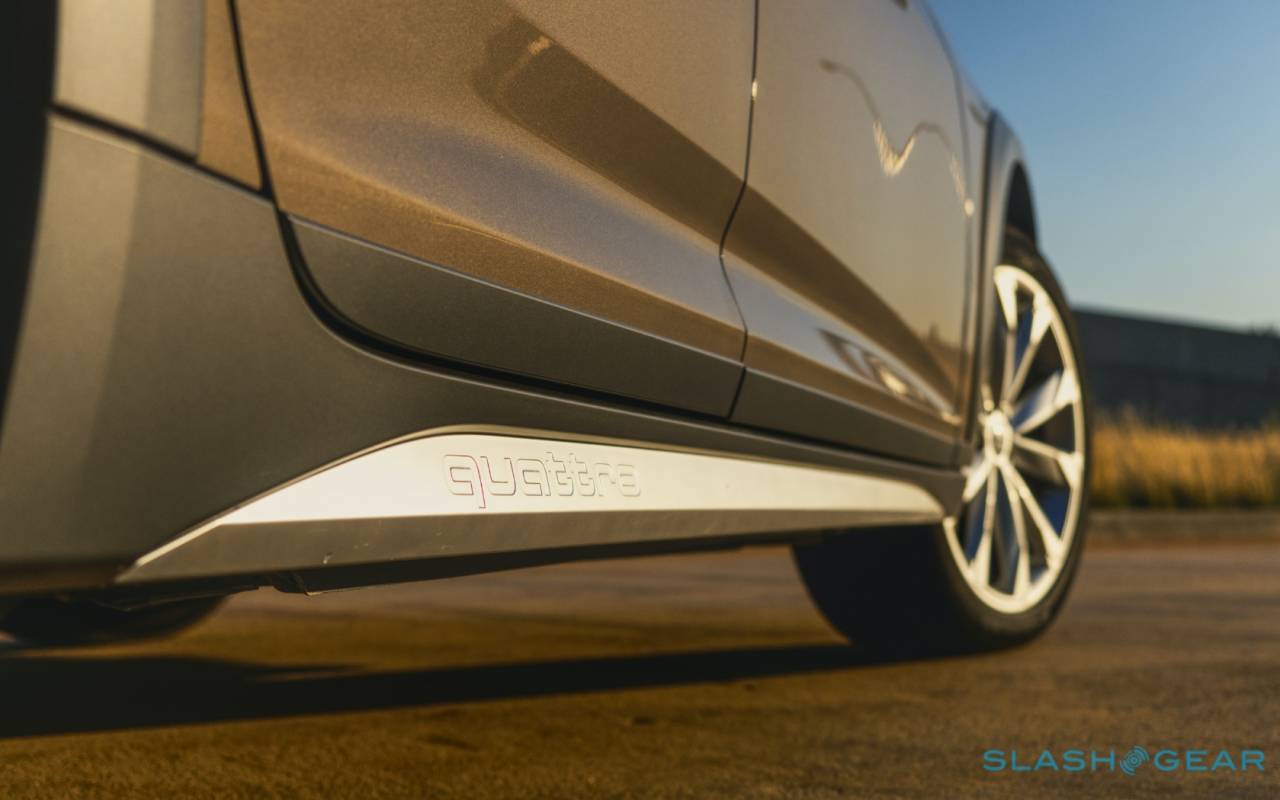 I’m a wagon fan, myself, and I think the A6 Allroad’s swooping roofline looks just dandy. Not as blocky as wagons of old, it gives the Audi a visual urgency even when it’s standing still. Optionally, the automaker will switch the wheel arches and rocker panels for body-color versions, but I think their standard Scandium gray matte finish plays just swell with the $595 Soho Brown metallic paint.

Aesthetics and a few mechanical tweaks aside, though, this is the eminently capable A6. You get the same 3.0-liter turbo V6 engine, quattro all-wheel drive, and 7-speed S tronic automatic transmission, with 335 horsepower and 369 lb-ft of torque on tap. 0-60 mph arrives in 5.1 seconds, while the quattro with ultra AWD system uses an electronic transfer case to prioritize more economical front-wheel drive while still bringing in the rear wheels should traction needs require it. 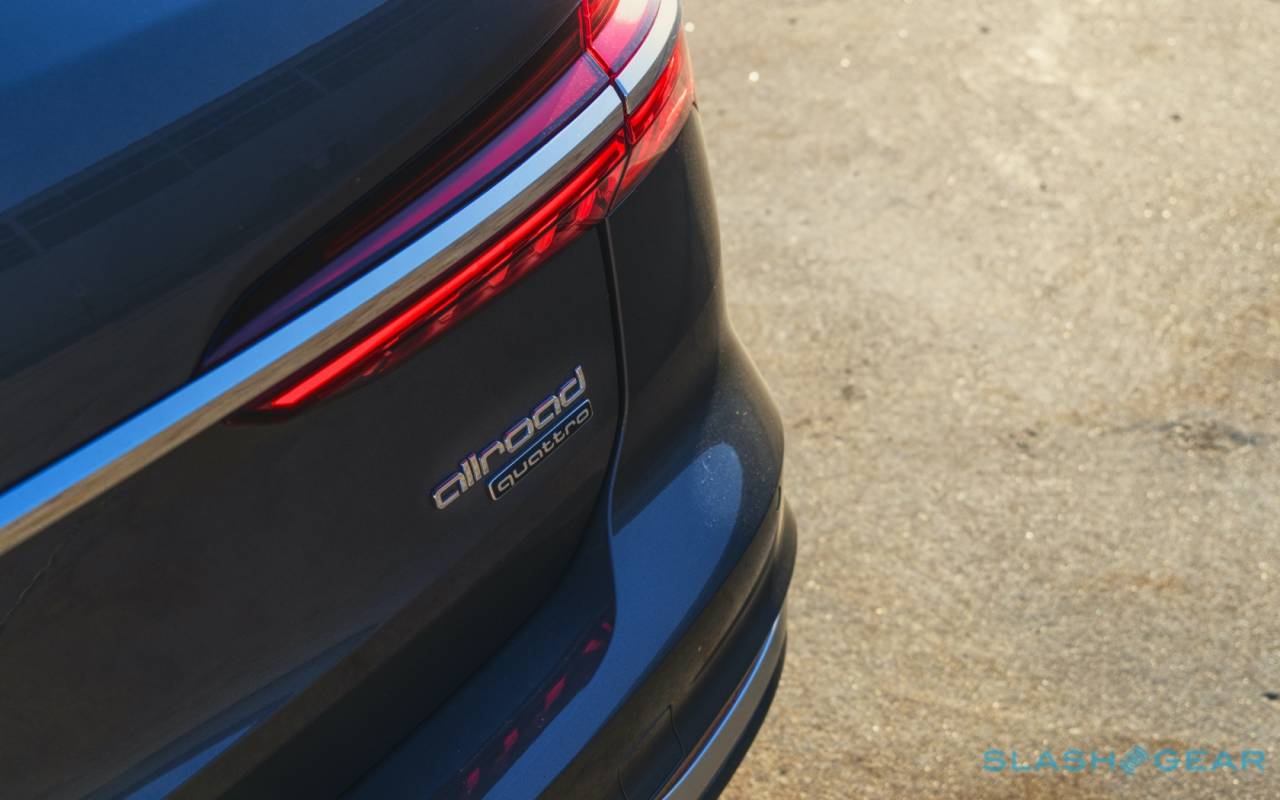 The old Audi Allroad Quattro was notoriously capable out in the rough stuff. Audi has similar boasts for the A6 Allroad, though the reality is that it’s not quite in the same league. Yes, in Offroad mode you can propel the new sorta-SUV to rise up on its air suspension stilts for up to 7.3 inches of total ground clearance, but it’ll lower itself automatically when you go past 22 mph. 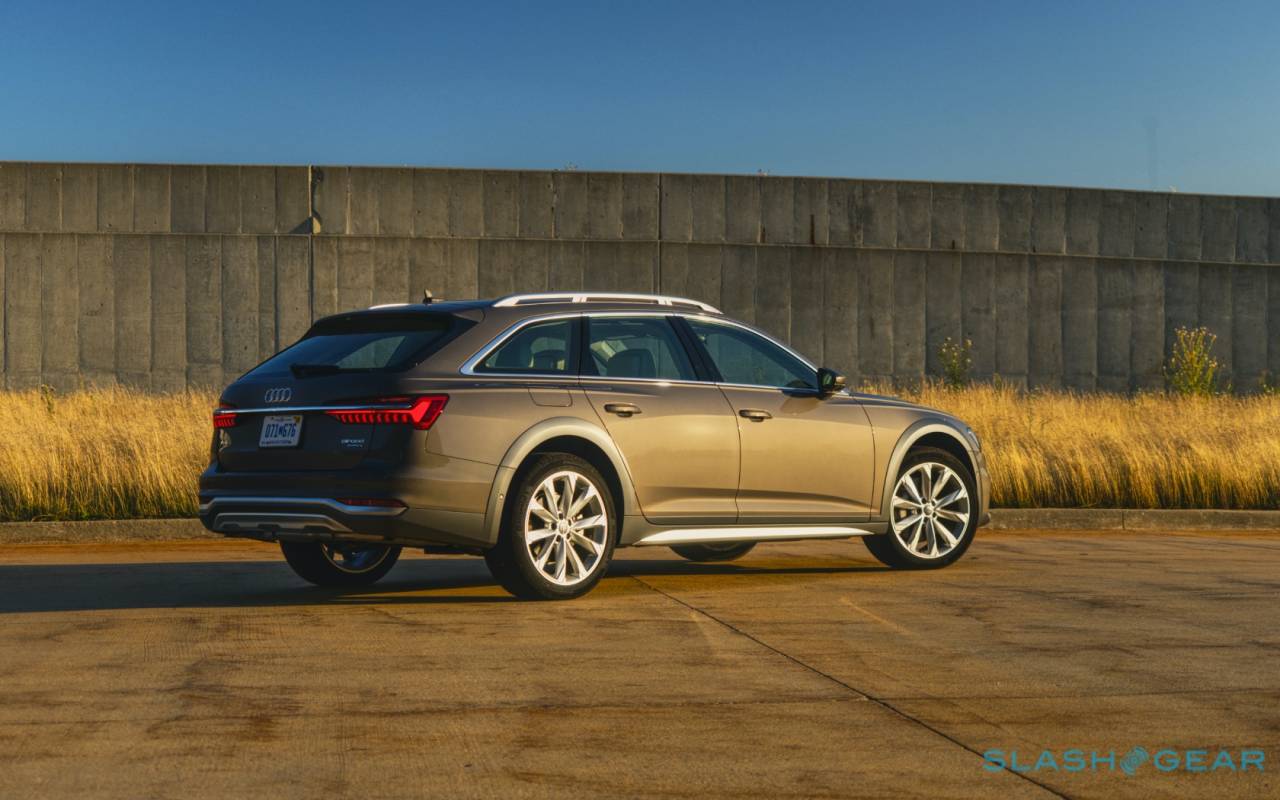 Honestly, ride quality, handling, and general performance are much better when you’re lower down anyway, so we may as well embrace it. Audi’s V6 falls short of the 362 horsepower that the 2021 E450 MATIC All-Terrain supplies and matches it on torque, but comfortably bests the V90 Cross Country T6 AWD with its 316 hp and 295 lb-ft. The EPA rates it at 22 mpg combined, 20 mpg in the city, and 26 mpg on the highway, a few points down versus Mercedes and Volvo’s wagons. 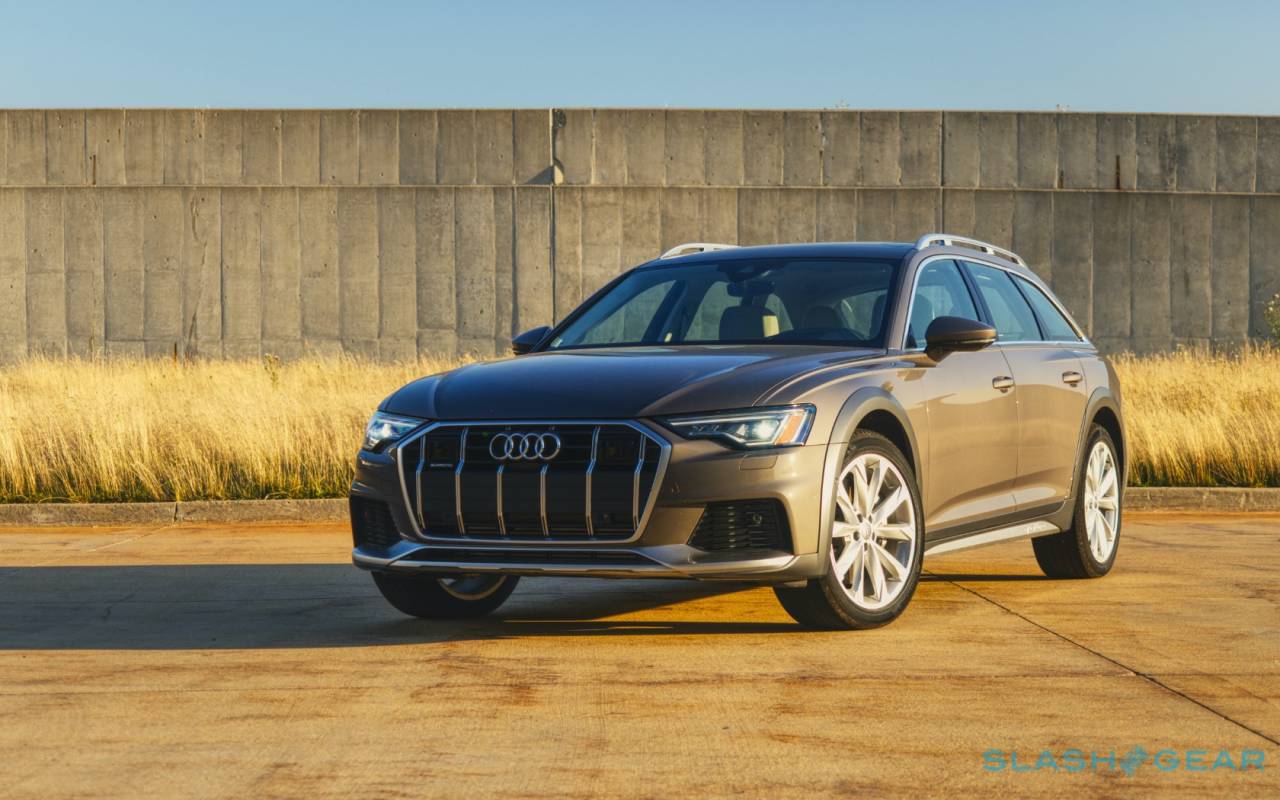 The Audi is an excellent long-distance cruiser, the adaptive air suspension demonstrating its worth in smoothing out bumps and keeping the Allroad flat and stable even in twisting corners. Dynamic mode drops it a little over half an inch, weighting up the steering and making pick-up more eager too; it also makes better use of the dual-clutch transmission, which can be a little more jerky at times than you might expect. On the flip side, the 48V mild-hybrid tech helps the auto stop/start to avoid the disconcerting rattle that some rival systems suffer.

This isn’t a sports car – pony up the $109,000 for an RS6 Avant if you want Audi’s most potent wagon – but it’s a great everyday vehicle. The roofline means more than an inch of extra headroom in the second row, and there’s 30 cu-ft of trunk space even with that bench occupied. Drop those seats and it basically doubles; you get slightly less overall space than the Mercedes, but more than in the Volvo. 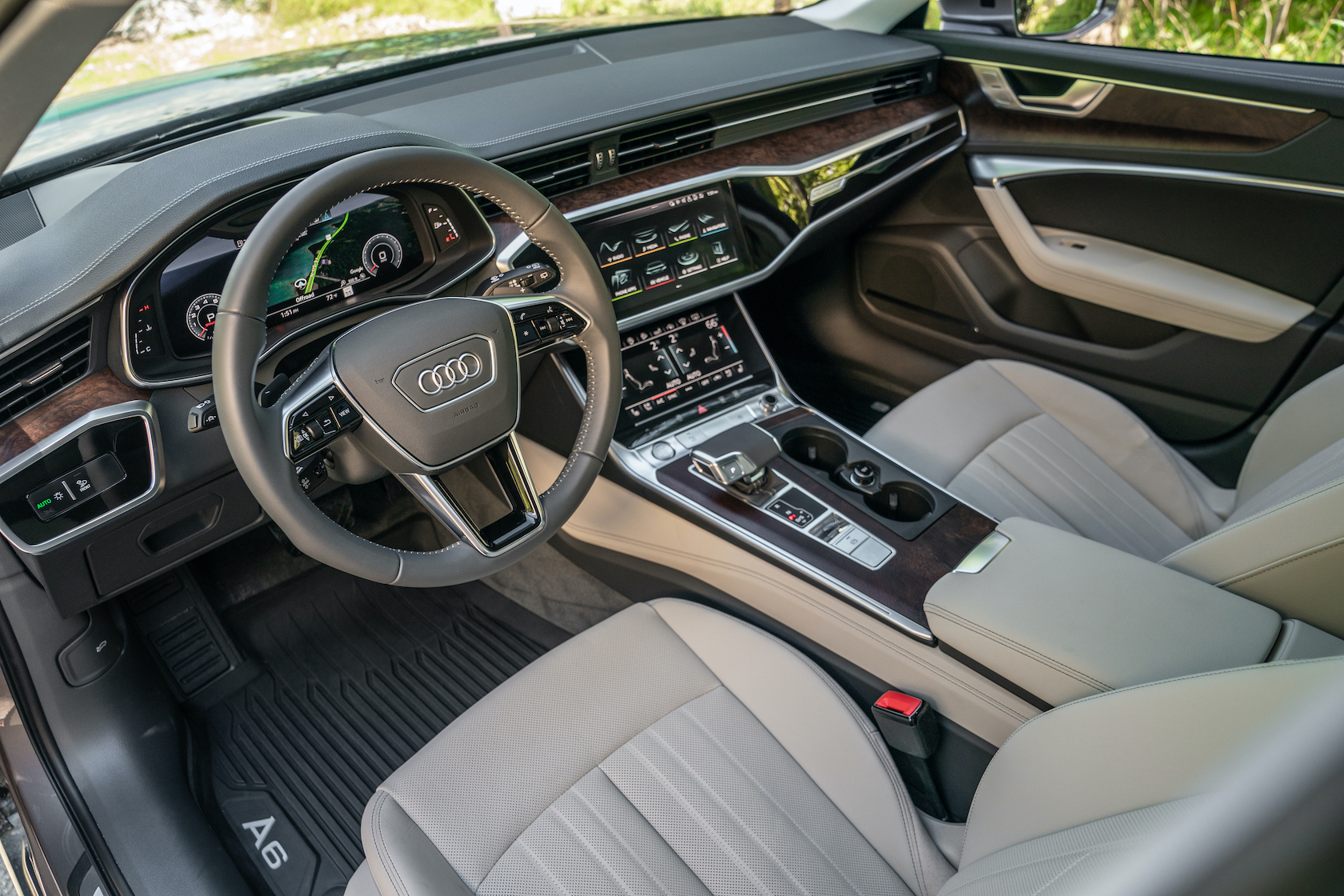 Audi’s cabin beats out both, however. The Pearl Beige leather is another sign that the A6 Allroad might be happier away from mud – though there are darker finishes, and rubber mats, if you think dirt is likely – while the cleanly laid-out dashboard is a reminder that even Audi’s German rivals are playing catch-up here.

The virtual cockpit digital instrumentation is standard, as is a twin-touchscreen infotainment stack: a 10.1-inch panel up top for multimedia and navigation, and an 8.6-inch panel underneath for climate control and text entry. Apple CarPlay and Android Auto are standard too, as is a Bang & Olufsen 3D audio system. Four-zone climate control, a panoramic sunroof, power tailgate, and 360-degree camera also come by default; the $4,500 Prestige package adds a head display, ambient LED lighting, power soft-close doors, heated rear seats and ventilated front seats, and dual pane acoustic glass, among other things. 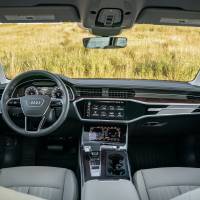 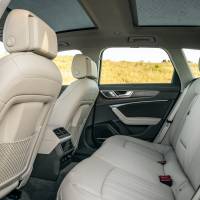 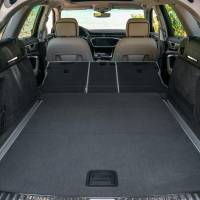 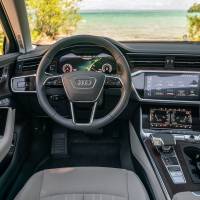 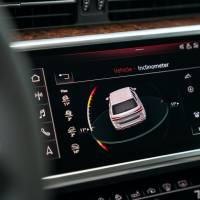 Standard safety tech includes front braking assistance on the $65,900 Premium Plus trim (plus $995 destination), but most of the good stuff comes in the Prestige package that nudges the A6 Allroad up to $70,400. That includes adaptive cruise control, rear cross traffic assistance, blind spot warnings, turn and intersection assistance, traffic sign recognition, and vehicle exit warnings, among other things. 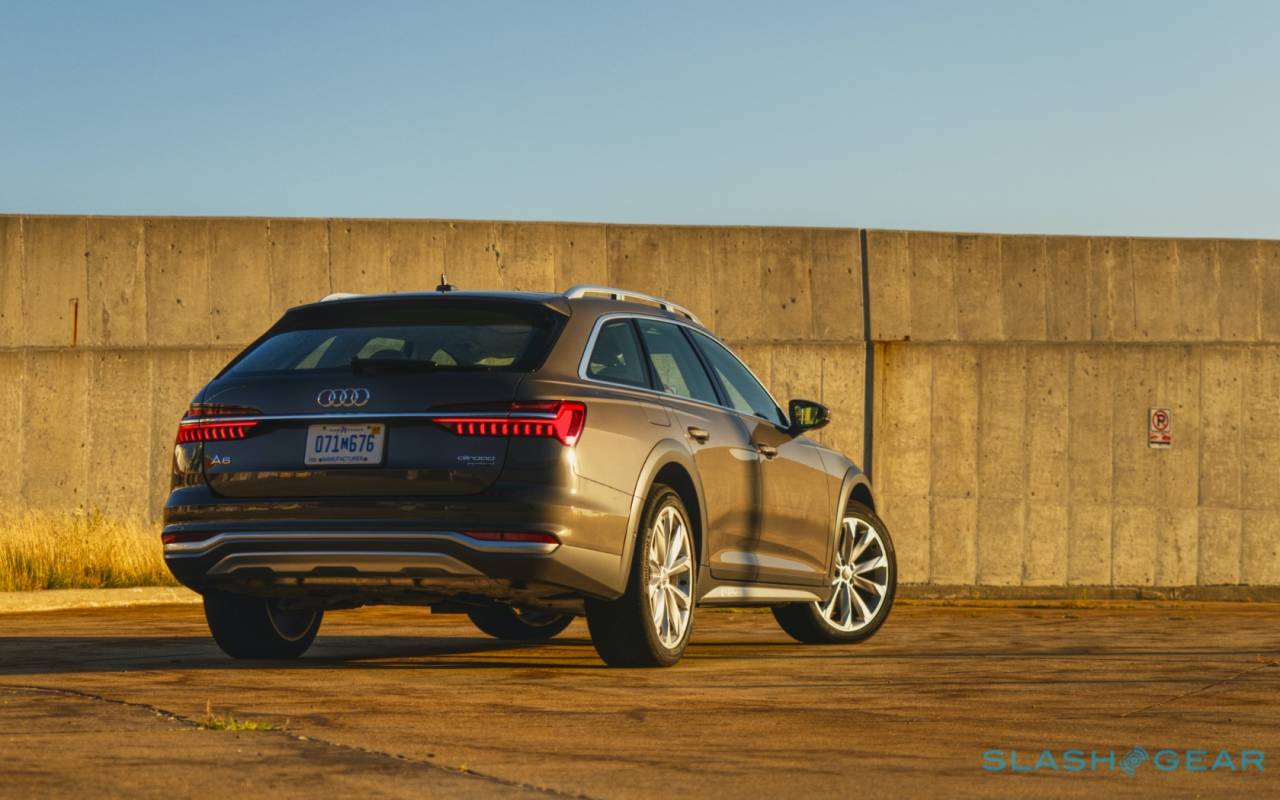 There’s no denying that you pay a little more for the Allroad experience. Volvo’s beefed-up wagon is considerably cheaper, even if it’s less powerful, and while the Mercedes is in the same ballpark, you can’t deny that both automakers have actual SUVs that are more affordable and probably more practical, too. 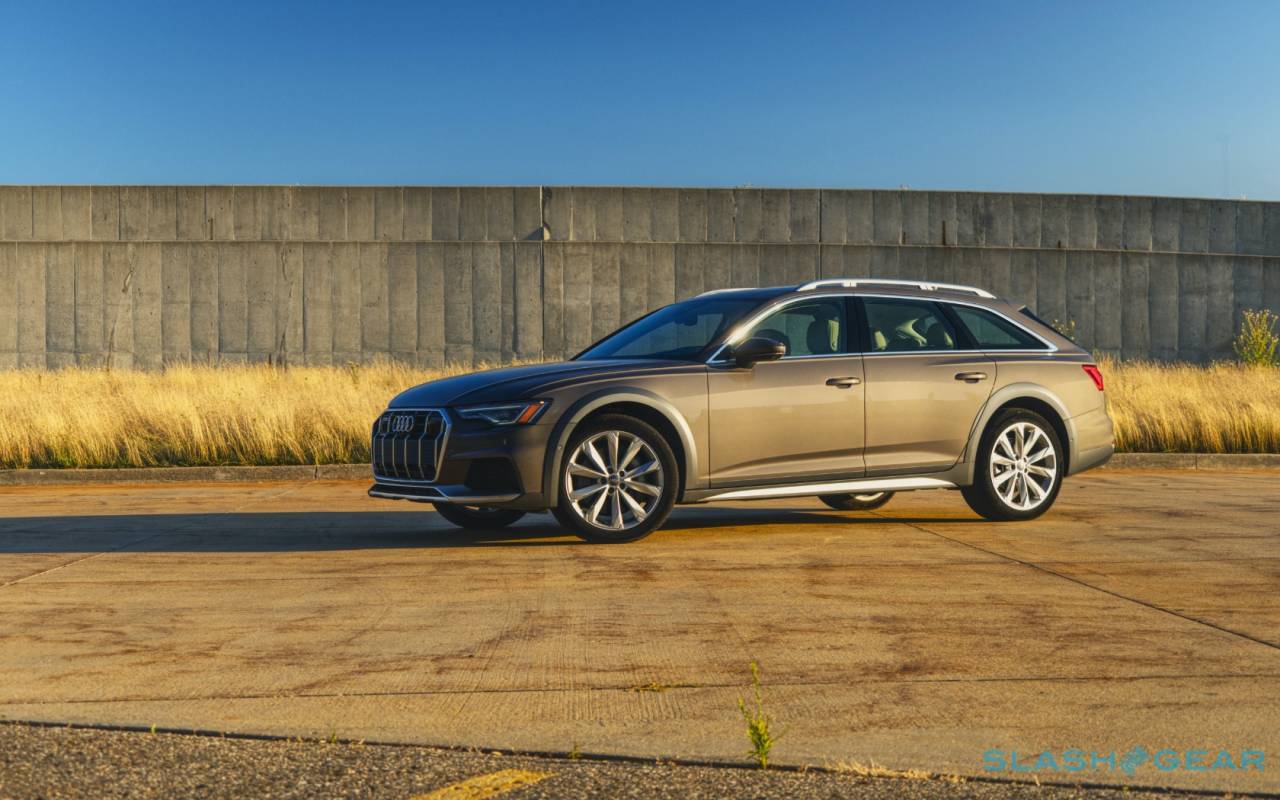 They don’t look as good, mind, and neither do they drive with the same degree of engagement. Perhaps the most compelling argument for the Audi A6 Allroad is a side effect of all those stubborn, wagon-averse shoppers: its exclusivity. In an asphalt sea of SUVs, the Allroad may not be a go-anywhere adventurer, but its blend of luxury, style, and a little more off-road talent make it an appealing outlier.