You can’t accuse Mercedes-Benz of not having tried to woo US drivers with its wagons. That the old E-Series wagon is being replaced in North America by this, the 2021 Mercedes E450 4MATIC All-Terrain, isn’t an admission of failure there, as much as recognition that the auto industry is far from the days of one-size-fits-all. There’s more than one way to package a wagon, and the All-Terrain promises to be a distinctly American-flavored interpretation.

So, European drivers will get a handsome E-Class wagon alongside the All-Terrain and be grateful for it; their North American counterparts still can’t be relied upon to get with the wagon lifestyle, and thus they only get the 2021 E-Class All-Terrain instead. Lifted slightly, it gets black contrast lower body panels and silver front and rear fascia to pick up on the SUV cues buyers here go looking for. The effect can be subtle or stark, depending on the primary paint color. 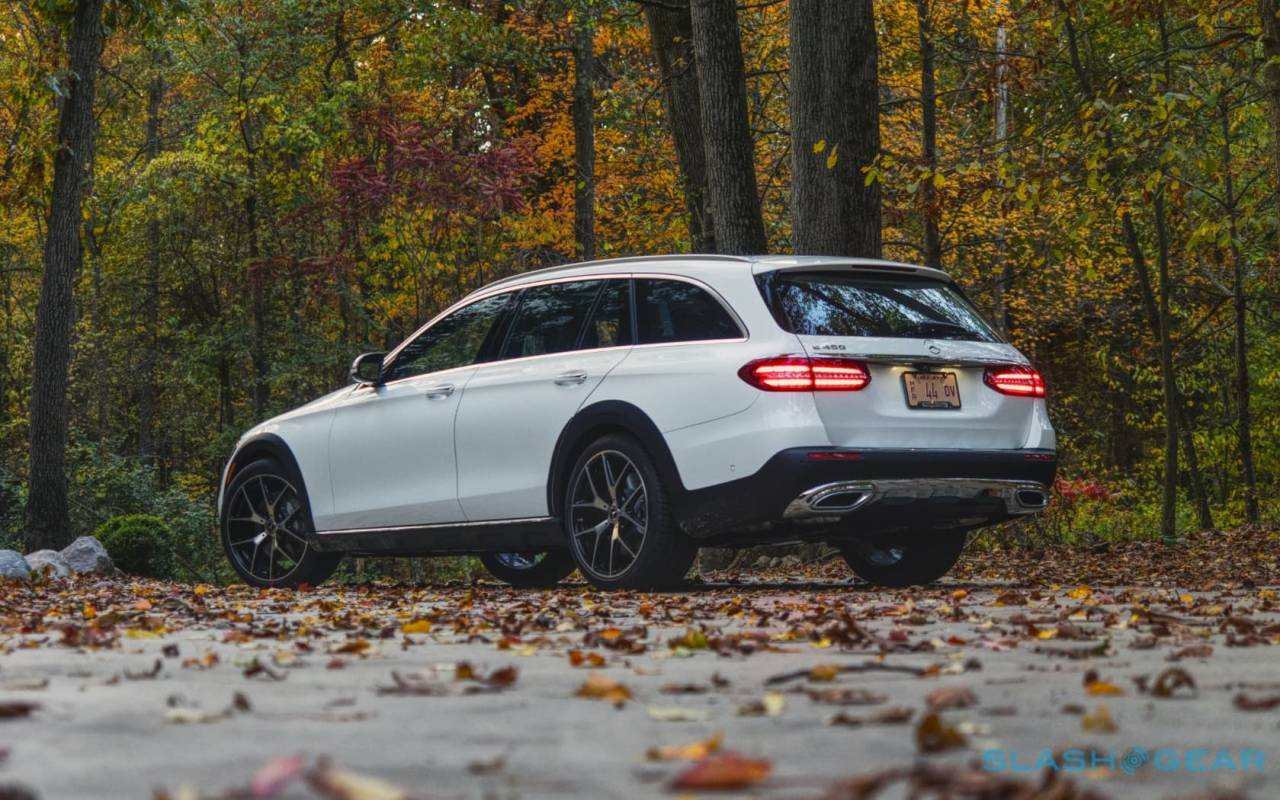 Though the end result isn’t quite as visually-pure as the wagon, it makes up for that with just the sort of butch sleekness that keeps these types of vehicles popular. Audi has had similar success with its Allroad, and Volvo with its Cross Country series.

Like them, the 2021 E450 All-Terrain borrows heavily from its more luxe-minded brethren. Air suspension is standard, plus LED lights front and rear, blind spot alerts, and Active Brake Assist. If you want the more advanced ADAS, like steering and lane-change assistance, active blind spot assistance, rear-end collision protection, and reverse assistance with active braking, prepare to open your wallet a little wider. 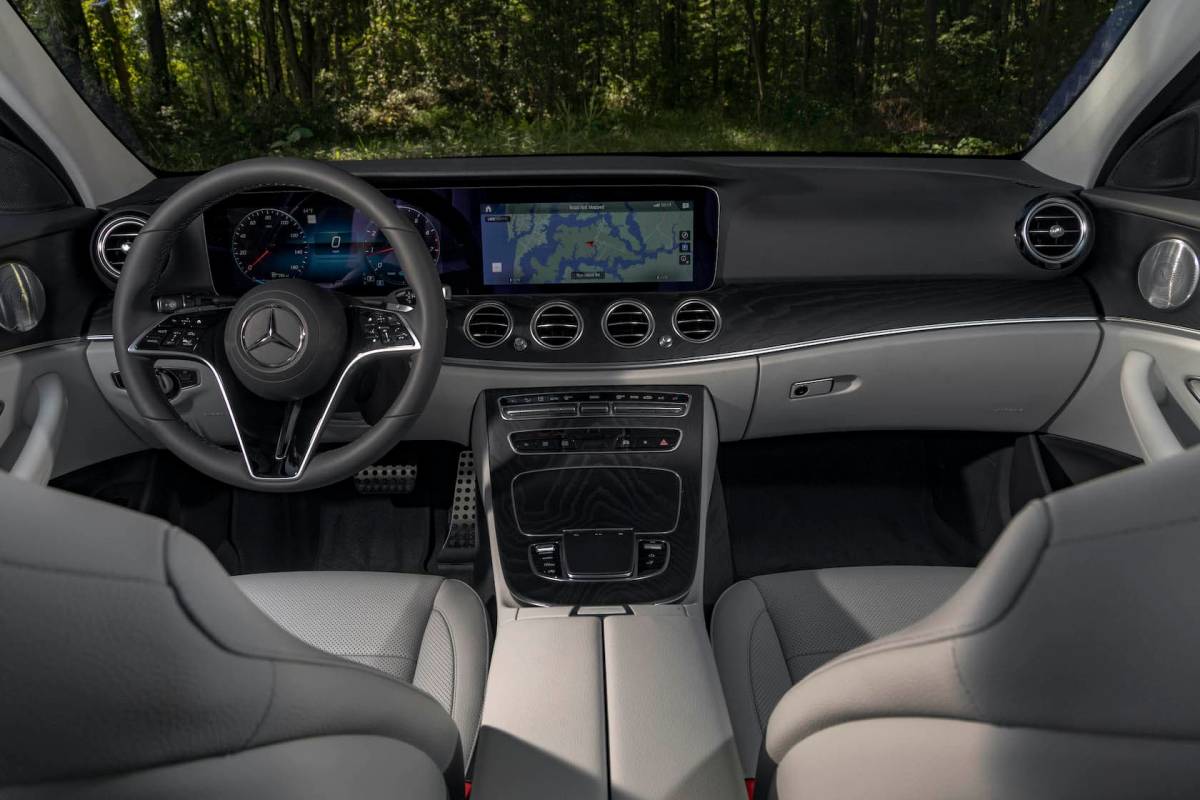 The same goes for the inside. MB-Tex faux-leather is standard, along with various options of open-grain wood; Nappa leather will cost you extra. The overall design feels a little more classic than some other recent Mercedes, the broad swoop of the dashboard punctuated with plenty of physical shortcut buttons.

Mercedes is particularly proud of its new steering wheel, with which I’m in a love-hate relationship. Gone are the weird BlackBerry-esque optical trackpads and meaty metal scroll wheels, with an all-capacitive system in their place. It’s cleaner aesthetically, but I’m not entirely convinced it’s actually easier to use: trying to navigate the central infotainment display using the right touchpad proved to be a swiping chore, and the volume scroller was a reminder of how Honda has made a physical knob a selling-point ever since getting roundly slated for its unloved touch strip. 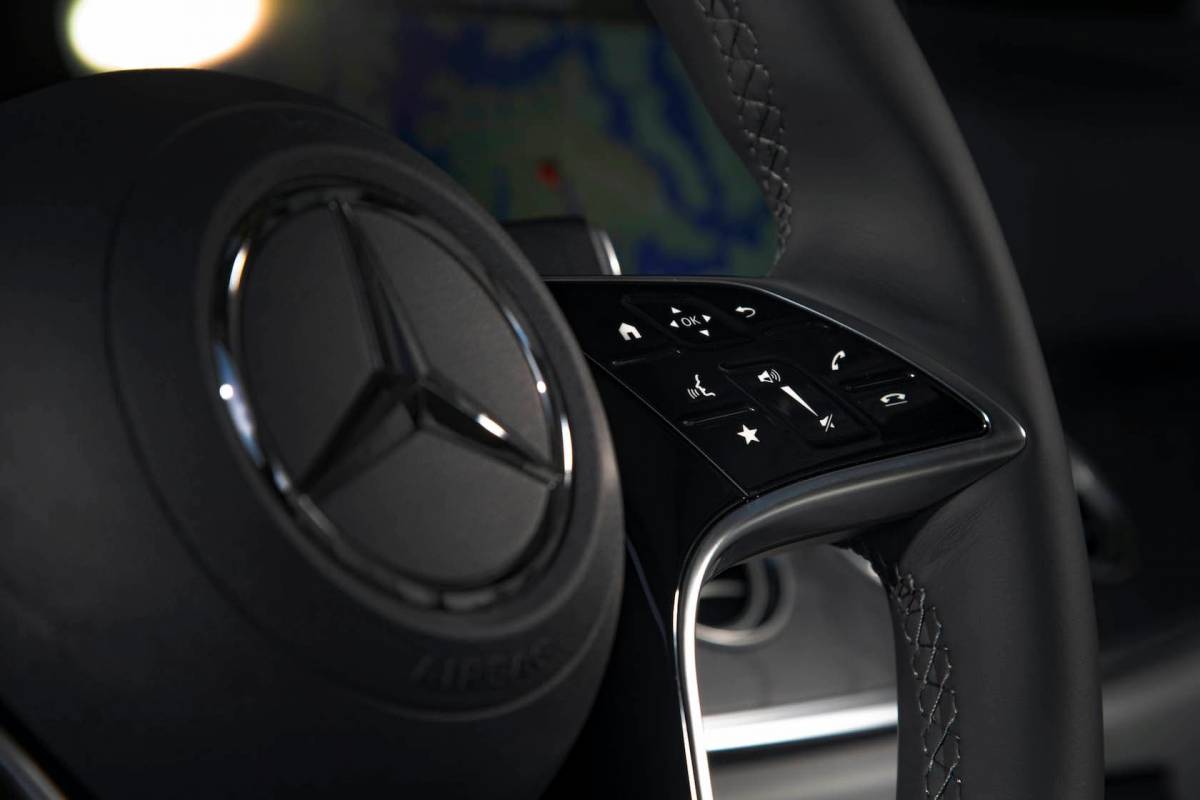 Far better is how the capacitive sensors interact with Active Steering Assist Distronic, Mercedes’ adaptive cruise control and lane-keeping system. Previously, you’d need to apply a little torque to the wheel in order to convince the tech that you were still present and attentive and, like with all such systems, that could be annoying on the sort of long, uninterrupted highway drives where you really want adaptive cruise picking up some of the slack.

The new wheel can track whether you’re in contact with it through a simple touch, no torque required. Now if I’m being brutally honest, I’d still prefer a hands-free system like Cadillac’s Super Cruise or Ford’s upcoming Active Drive Assist, both of which rely on eye-tracking so you can take your hands off the wheel altogether. Mercedes’ combination of smart cruise control and lane-keeping, though, is a close second, shouldering much of the tedium on a number of 100+ mile drives. 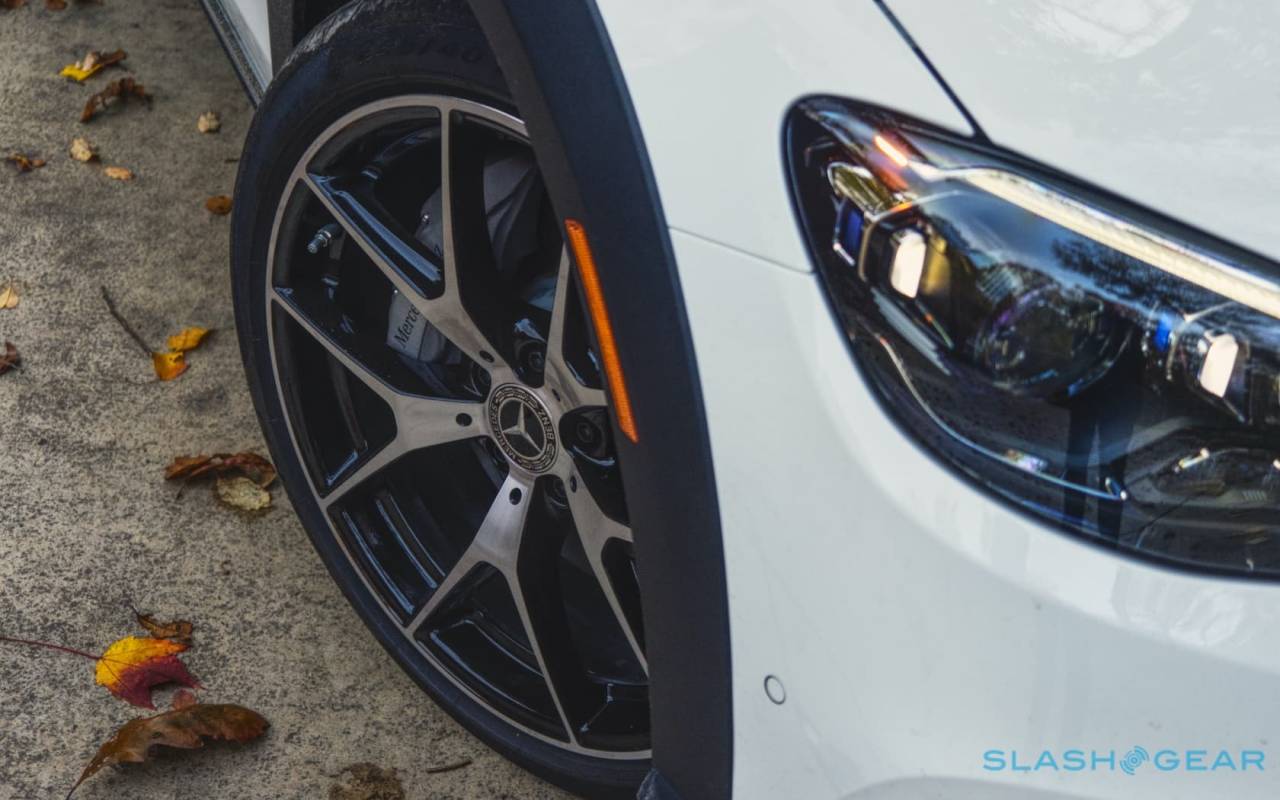 There’s a lot to like about the All-Terrain in that situation. Mercedes’ suspension tuning is on the soft side, especially in Comfort mode, and easily capable of soaking up unruly highway asphalt. Notching over to Sport dispatches any of the lingering floatiness, and helps disguise the raised center of gravity.

The 3.0-liter turbocharged inline-six gives you 362 horsepower and 369 lb-ft of torque. Mercedes’ EQ Boost system adds an extra 21hp and 184 lb-ft of electric power, most usefully for some more immediate urgency from a standing start. This is no plug-in hybrid – something conspicuous for its absence – but it underscores just what sort of role electrification can play so well in the luxury segment. It feels like just the right amount of power, though those with bigger appetites can opt for the AMG E63 S with its excessive 603 horsepower. 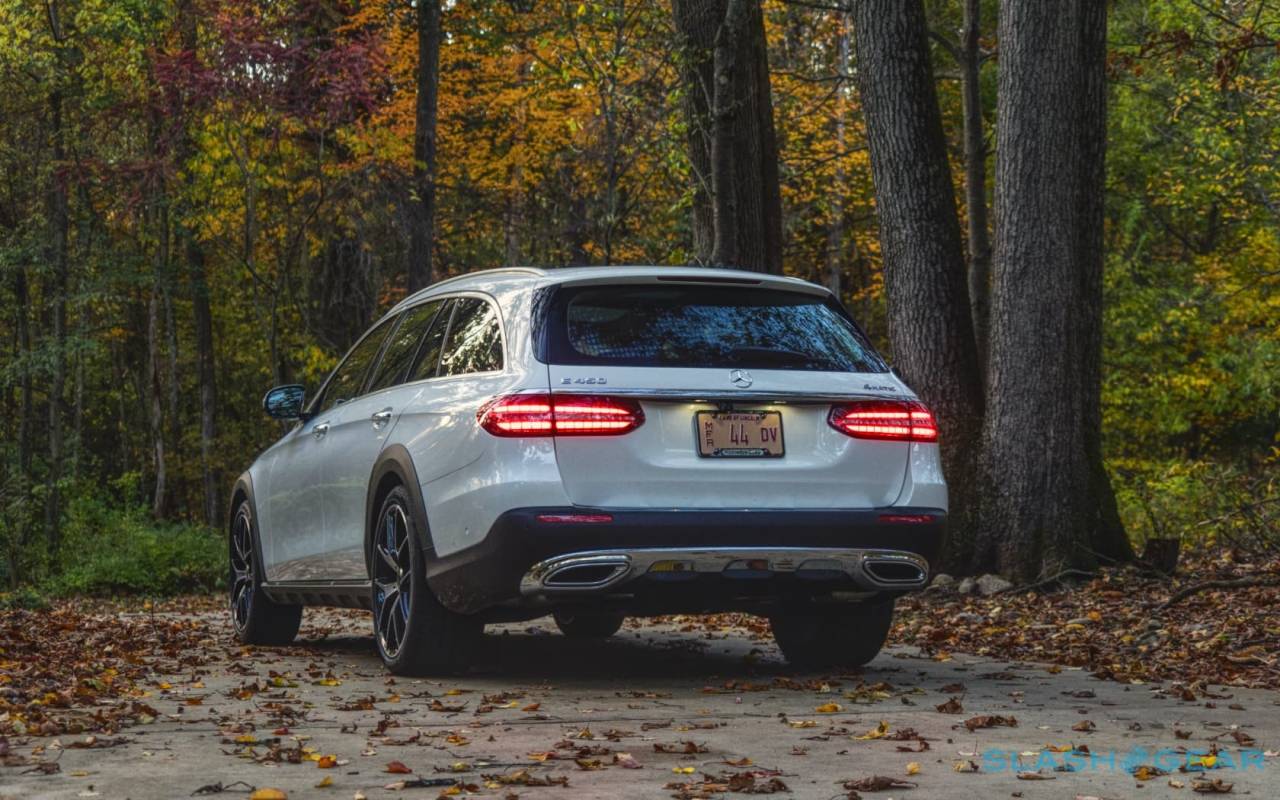 The 9-speed automatic slurs with smooth proficiency, and despite the number of ratios on offer it’s seldom left unsettled. If you’d rather, you can snick through them yourself using the – metal, not plastic – steering wheel paddles, but I suspect most owners won’t bother. 0-60 mph arrives in 5.1 seconds, not bad at all considering the 4,530 pound curb weight, while top speed is limited to 130 mph. You can likely blame the standard all-weather rubber for that cap.

As for off-roading, there’s theory and there’s reality. The All-Terrain is lifted about two inches over the regular E450 wagon, for at least 5.75 inches of ground clearance. Poke at the on-screen controls for the air suspension system and you can temporarily raise the car up higher for still trickier situations. Two new modes in the Dynamic Select system – Offroad and Offroad+ – put the emphasis on getting through mud, gravel, and other unruly surfaces, and there’s a handy downhill speed control feature. 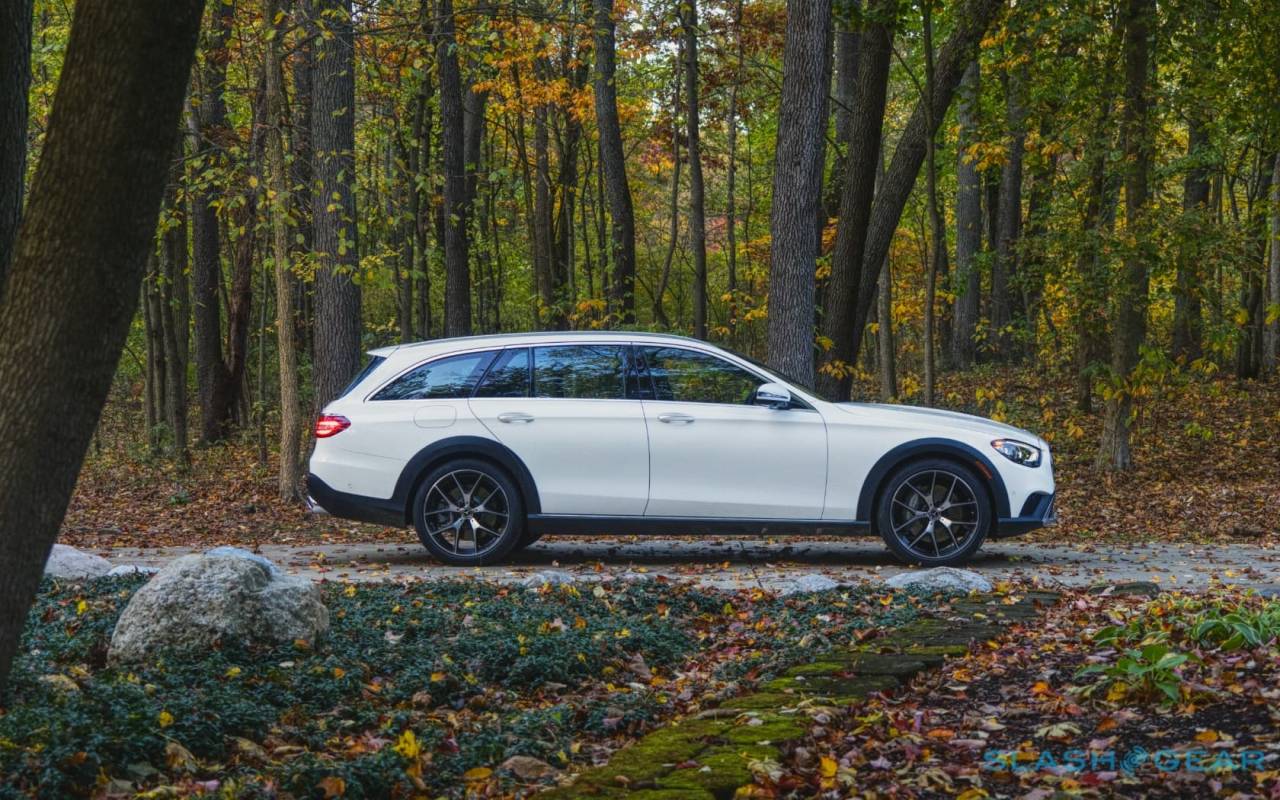 Is all that going to replace a “proper” SUV? Probably not, but considering just how few people actually need those capabilities I’m not sure that should count against the All-Terrain. It’s not hard to imagine a horse box or trailer hitched to the back, the standard 4MATIC all-wheel drive dispatching towing duties with as much quiet confidence as I found it dealt with wet roads and slippery leaves. “Surefooted and reassuring” is the motto here.

Your accommodations deliver no less than that, either. For 2021, Mercedes makes its dual 12.3 inch dashboard displays standard on the E-Class, just as it ought to have done from the start, and the system is now running the latest version of MBUX. That means the excellent voice command system is present and correct – triggered with “Hey Mercedes” and able to adjust everything from the multimedia and standard navigation, to seat heating and, if fitted, massage – if you’d rather not use the center touchscreen, the trackpad in the center console, or those fiddly steering wheel controls. Multi-color ambient lighting is standard, too, along with Android Auto and Apple CarPlay, heated front seats, and a power tailgate. 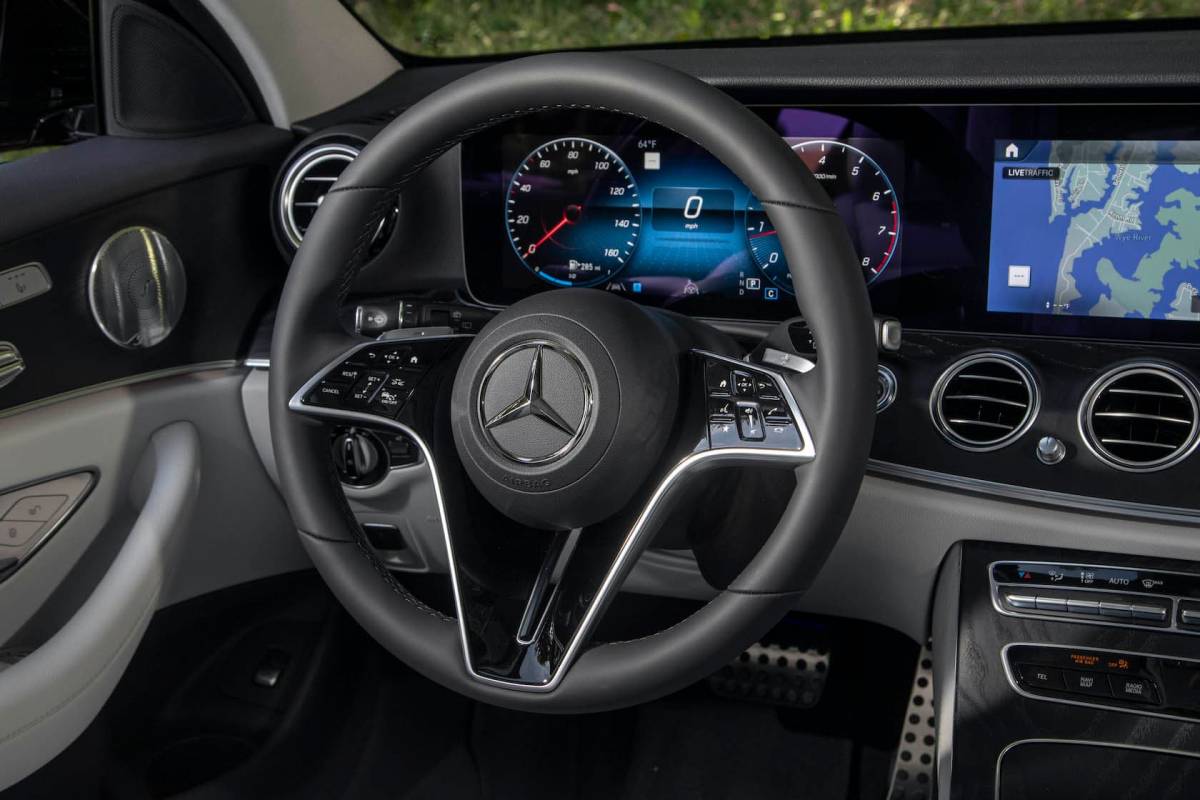 As you’d expect, the options sheet is long and comprehensive. It’s not difficult to send the All-Terrain’s $67,600 (plus $1,095 destination) sticker price spiraling up by $20k more. Larger, fancier 20 inch wheels to replace the 19 inch standard; augmented reality navigation; a head-up display; ventilated front seats with massage; tri-zone climate control; a panoramic roof; Burmester audio system; and the Driver Assistance package with all the clever driving aids and active safety add-ons will each cost you extra. If you walk out the dealership with an All-Terrain under $80k, I’d be impressed. 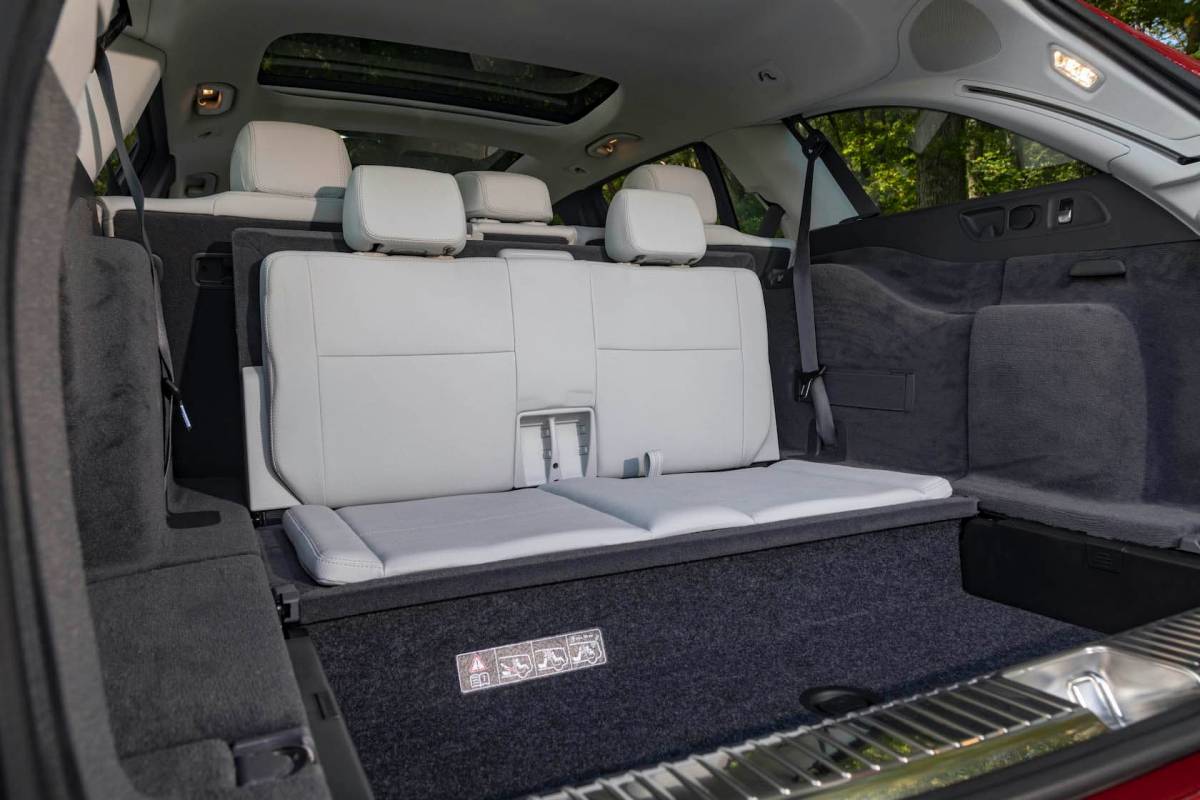 Standard are two pop-up third row seats, a rear-facing reminder of the Good Old Days of family wagoneering. Now, as then, you don’t want to be relegated to that final row, not unless you have very short legs and a tolerance for minimal cushioning. Better, I think, to just use the trunk for its 35 cu-ft of practically-shaped cargo space, which expands to 64 cu-ft with the split second row folded. 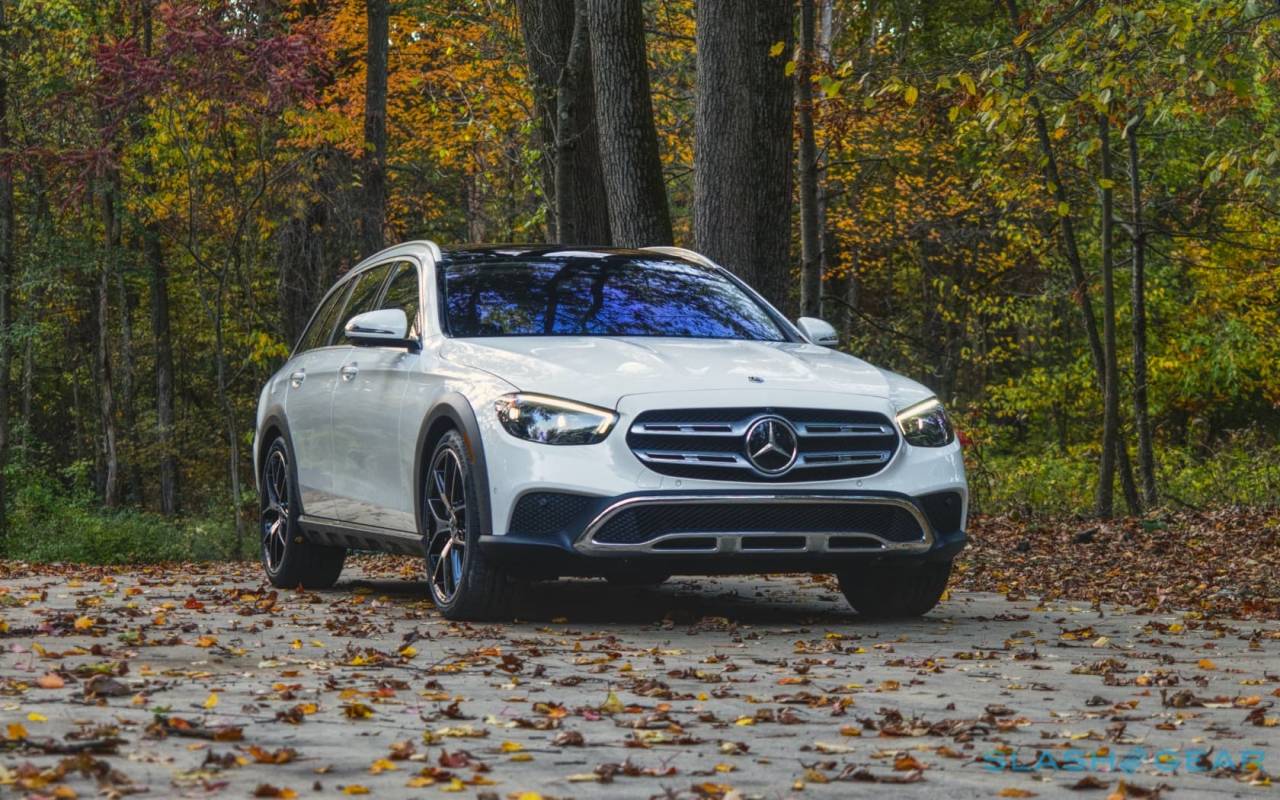 Like every other automaker, Mercedes has seen SUVs become more and more important in its line-up, particularly in the US. Figuring out where that leaves a classic – dare I say iconic – sedan or wagon such as the E-Class is equal parts challenge and opportunity.

The 2021 E450 4MATIC All-Terrain straddles those neatly. Sufficiently SUV-like to turn heads among American drivers, while simultaneously making minimal compromises on driving dynamics, it’s a vision of upscale motoring with a dash of off-road appeal. Though those with significant cargo demands or a regular need for three rows will likely want to look to a full SUV, All-Terrain owners with pockets deep enough to handle Mercedes’ options list will be having a lot more fun behind the wheel.