The highs, lows, and history of the 2020 Toyota Supra

The 2020 Toyota Supra is a controversial car. Styling, drivetrain, even the very identity of the car… all have come under fire as the long-anticipated nameplate returned from Toyota’s history books and headed to dealership forecourts. We’ve already driven the 2020 Supra and told you what to expect – read on for the need-to-know on why this particular coupe is so special, and so divisive.

The original Supra dates all the way back to 1978, with styling based on the Celica, but wider and longer. Toyota also swapped out the Celica’s inline-4 engine for the inline-6 which came to be closely associated with the car. It wasn’t until the second generation A60, though, in 1981 when the Supra name was attached. While in Japan the car was still known as the Celica XX, internationally it was branded the Celica Supra.

Come the third generation car, the A70 in 1986, the Supra cut ties – and its name – with the Celica. A more powerful engine was added, and then the first Supra turbo in the 1987 model year. Rear-wheel drive, and with a manual transmission as standard, it also introduced electronically controlled independent suspension. 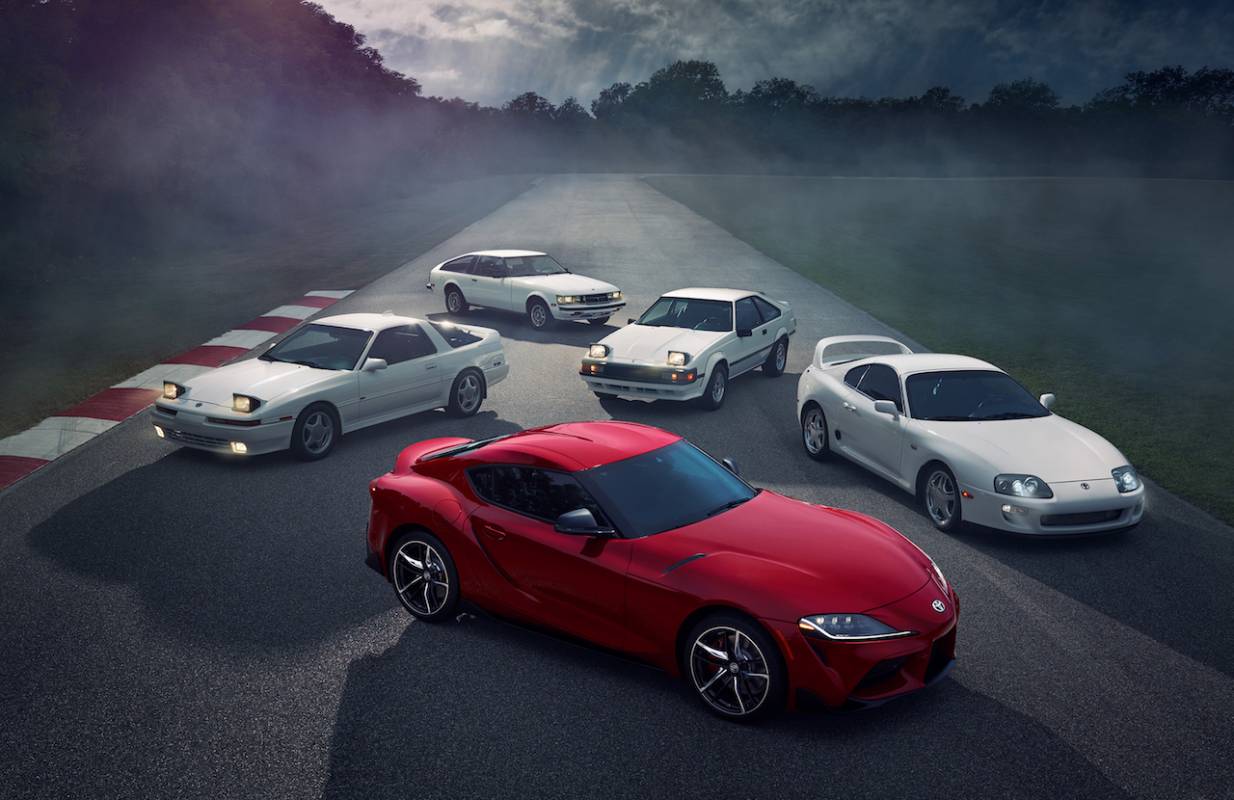 The A80, the fourth generation Supra released in 1993, was arguably the most distinctive. Its curvaceous body – often accompanied by a huge spoiler – was wrapped around both naturally-aspirated and twin-turbo inline-6 engines, along with both manual and automatic transmissions. Toyota also used it to debut a number of new features: it was the first of the automakers vehicles in the US, for example, to include a standard passenger airbag.

Ironically, the Supra arguably made its most significant inroads into mass market awareness several years after the fourth-generation car actually went out of production in the US. A 1994 Supra Mark IV starred in The Fast and the Furious in 2001, causing a surge in interest in the coupe. Unfortunately Toyota had ended sales of the car in North America, withdrawing it from the market by 1998.

With the Supra gone but certainly not forgotten, the idea of Toyota resurrecting the nameplate was a popular – and perennial – one among fans and the auto industry more broadly. Most of the time Toyota was conservative about stoking such chatter, though not all of the time. In 2007, for example, it reignited talk of a new Supra with the FT-HS concept.

The “Future Toyota Hybrid Sport” was the handiwork of the Calty Design Research studio, Toyota’s US-based design studio. A 2+2 coupe, it was envisaged as having a hybrid drivetrain with a 3.5-liter V6 gas engine and an electric motor. Together, Toyota estimated, it could deliver in excess of 400 horsepower and a 0-60 mph time of around four seconds. 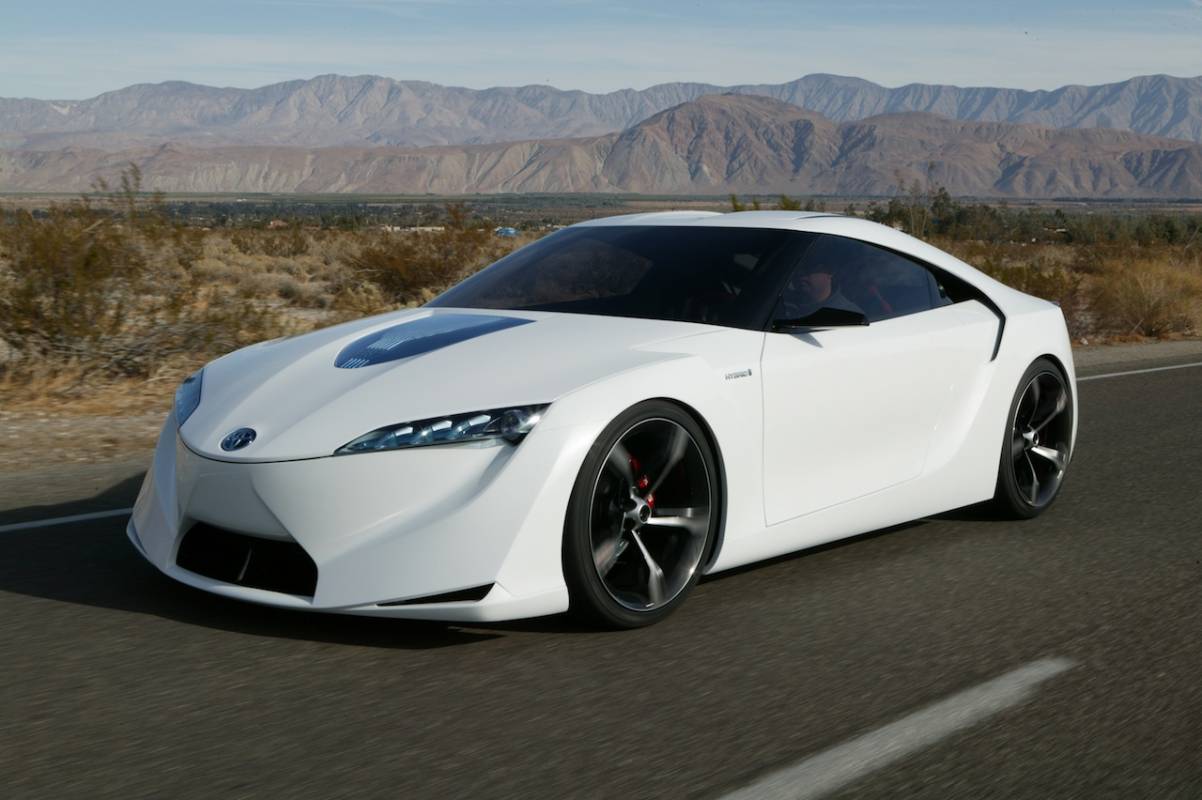 Despite a broadly positive reception, talk of a production version of the FT-HS dried up by 2008. Hints of the concepts styling did go on to reappear in the Toyota 86 however. However it wasn’t until 2014 when we really saw the automaker fuel the Supra flames.

That was with the Toyota FT-1 concept. Another product of Calty, the striking coupe borrowed liberally from earlier vehicles like the 2000GT, MR-2, and Supra, though the automaker refused to comment on whether a production version might bear the Supra name. That didn’t stop speculation, which continued until mid-2018. 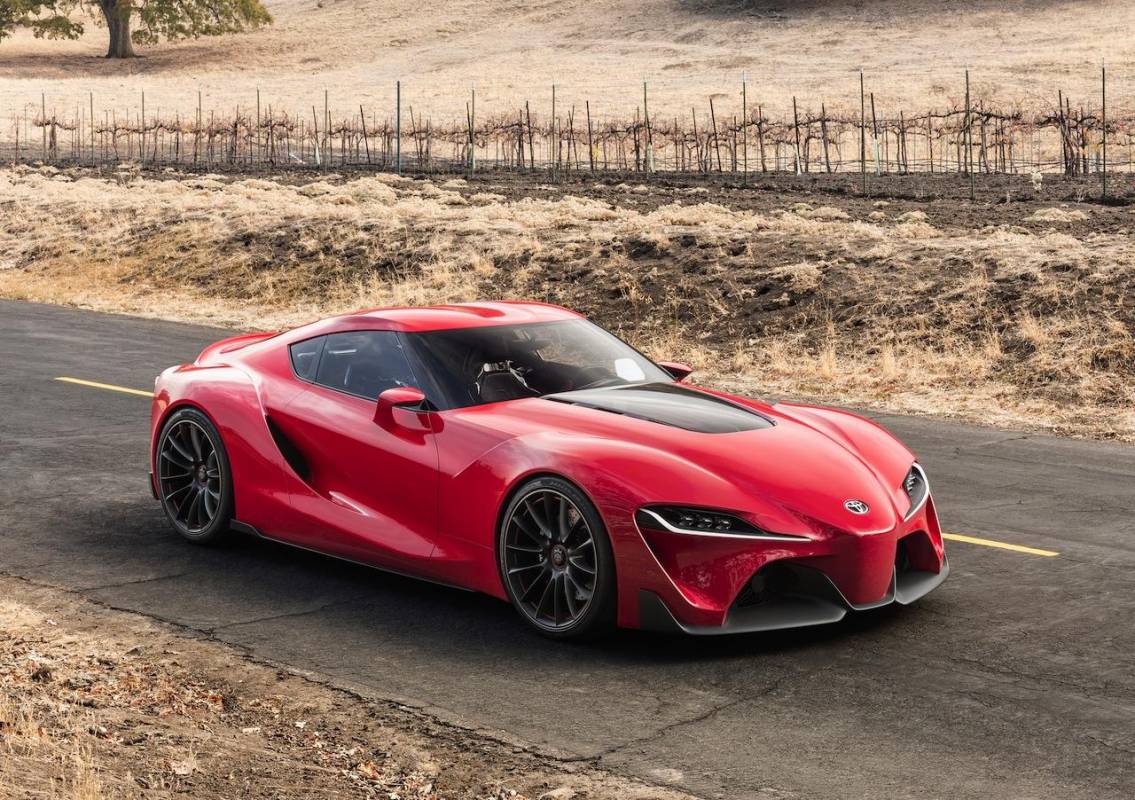 In July of that year, a close-to-production model – wearing bold black, red, and white camouflage – was brought along to the Goodwood Festival of Speed. Rumors two years earlier had pegged the Supra name as being attached, along with a turbocharged inline-6 engine. Toyota, however, couldn’t do it all alone.

Toyota needed a partner – BMW was the perfect pick

Dwindling sports car sales had scuppered the fourth-generation Supra, and even with the brand recognition on tap, Toyota knew it needed a partner to make the fifth-generation car financially viable. BMW turned out to be the obvious choice, because Toyota engineers believed a turbocharged inline-6 was an important nod to earlier models. The German automaker is one of a small handful still specializing in such an engine layout. 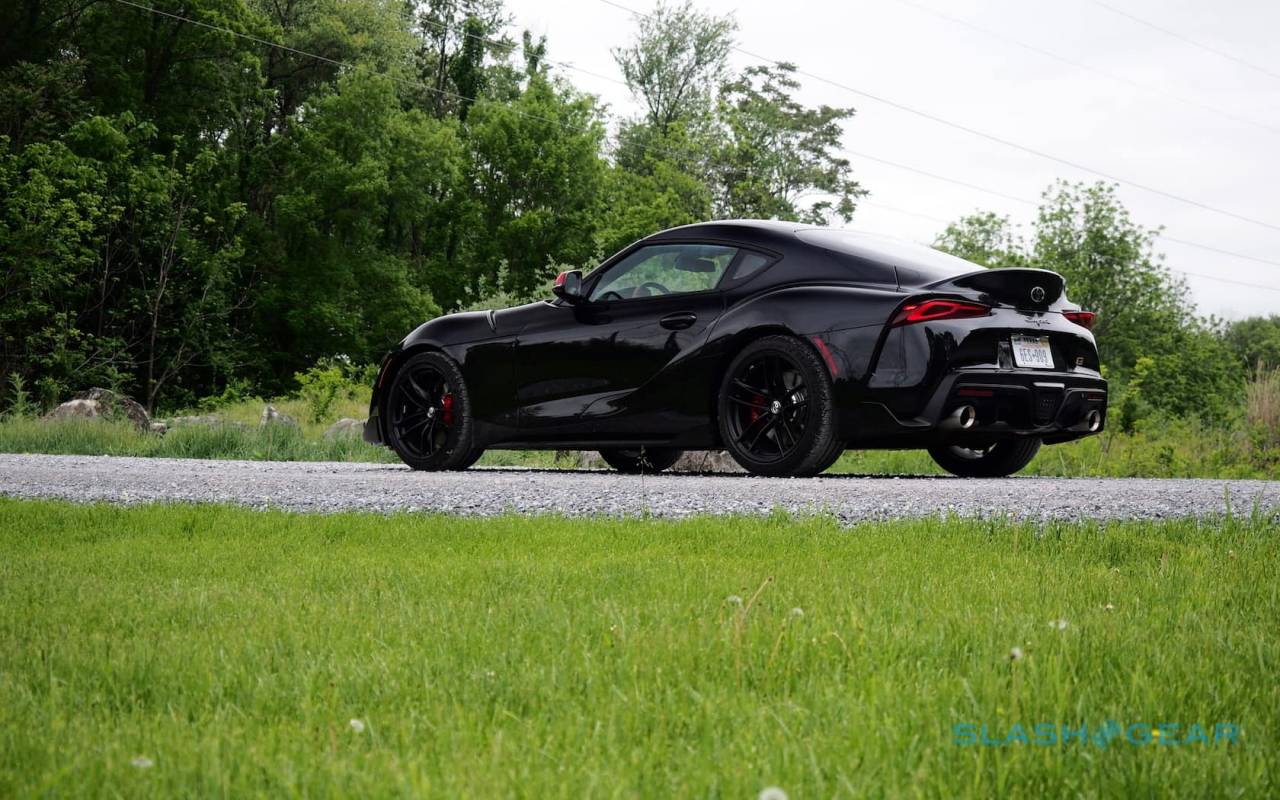 From the outset, according to chief engineer Tetsuya Tada, Toyota wanted to make a new Supra. BMW, though, wasn’t so confident about the segment. Various ideas were thrown around, including the possibility of a super high-tech sports car like a BMW i9, sitting above the existing i8 hybrid coupe. Eventually, though – and after a personnel change at BMW – the project that would result in the Supra and the Z4 was settled upon.

Porsche quickly became the target, and specifically the 718 Cayman and Boxster. BMW and Toyota worked together on the design of the chassis, notable for its particularly short wheelbase and low center of gravity. Then, the two teams separated, each working with BMW engines and the ZF transmissions, but tuning them and the suspension separately.

There’s a second engine the US doesn’t get

In the US, there’s one flavor of 2020 Supra drivetrain. That’s a turbocharged 3.0-liter inline-6, with 335 horsepower and 369 lb-ft of torque. It’s rear-wheel drive, and only offered with a ZF 8-speed automatic transmission. Toyota says it will do 0-60 mph in 4.1 seconds, and hit an electronically-limited top speed of 155 mph. 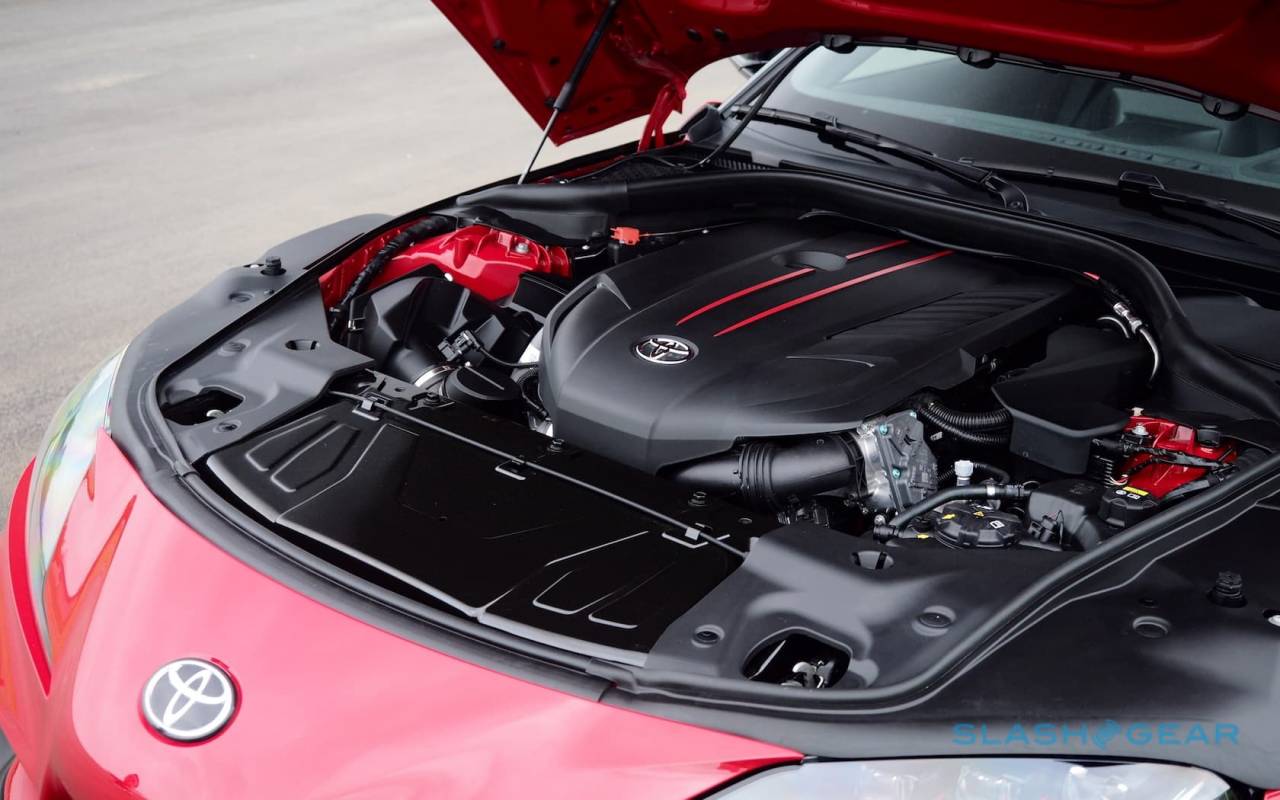 Outside of the US, however, there’s actually a second version of the car. That goes a 2.0-liter inline-4 engine, also turbocharged, and also sourced from BMW. It’s been tuned in two different ways, too: either delivering 194 horsepower or 255 horsepower, and either 236 lb-ft or 296 lb-ft of torque.

It does 0-60 mph in either 5.2 or 6.5 seconds, depending on power level, and gets the same ZF 8HP transmission. The 2.0-liter Supra is offered in Europe and Japan; there’s no word on whether Toyota will bring it to the US.

Beyond the love-it-or-hate-it styling of the 2020 Supra, there’s always one big question: where’s the manual transmission? Toyota’s decision to go with an eight-speed automatic alone has proved one of the most controversial elements of the new car. After all, even if purchase rates of stick-shifts are vanishingly low compared to automatics, there’s a small but vocal cohort of people who still love them. 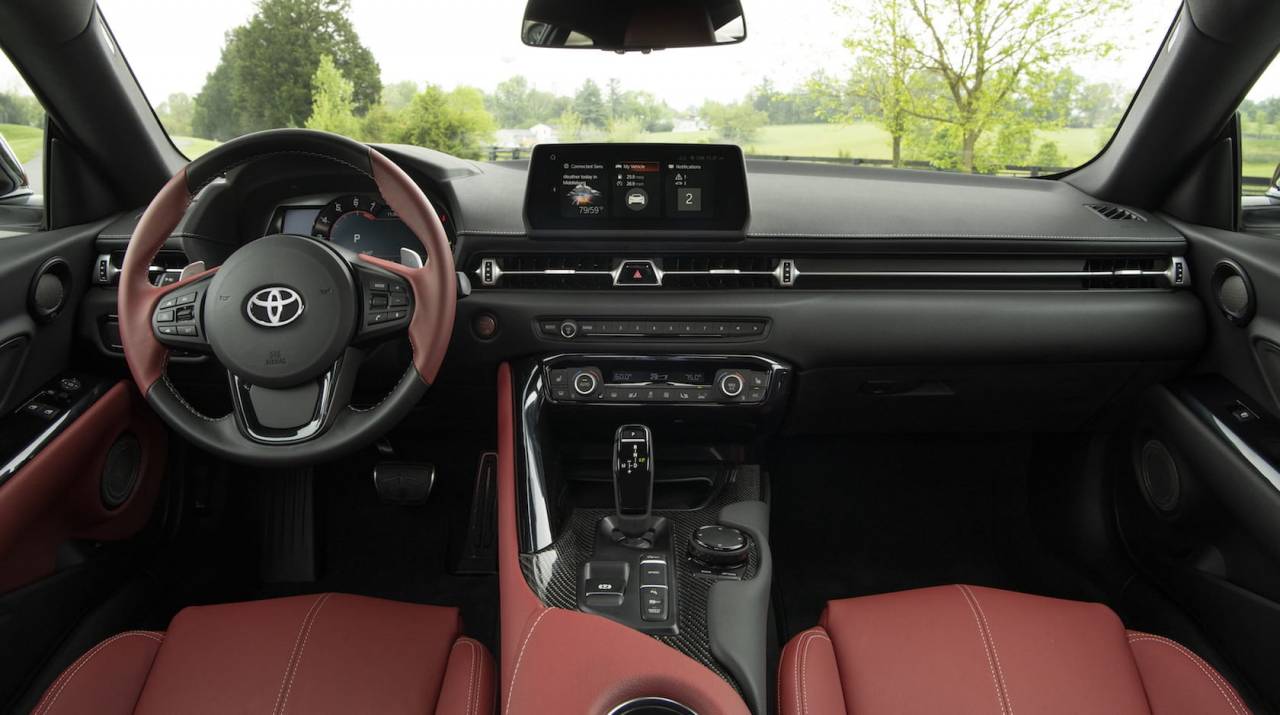 All chief engineer Tetsuya Tada will say is that Toyota has a manual transmission under consideration, and that the automaker “always has.” It’s a similar story when it comes to engine power. With the Z4 being offered with higher levels of tuning from its version of the 3.0-liter inline-6, some have questioned by Toyota opted for lower numbers.

That balance, the chief engineer says, is one Toyota could change in the future. “We don’t know when, or what capacity,” he explains, “but the evolution should be part of a sports car.” 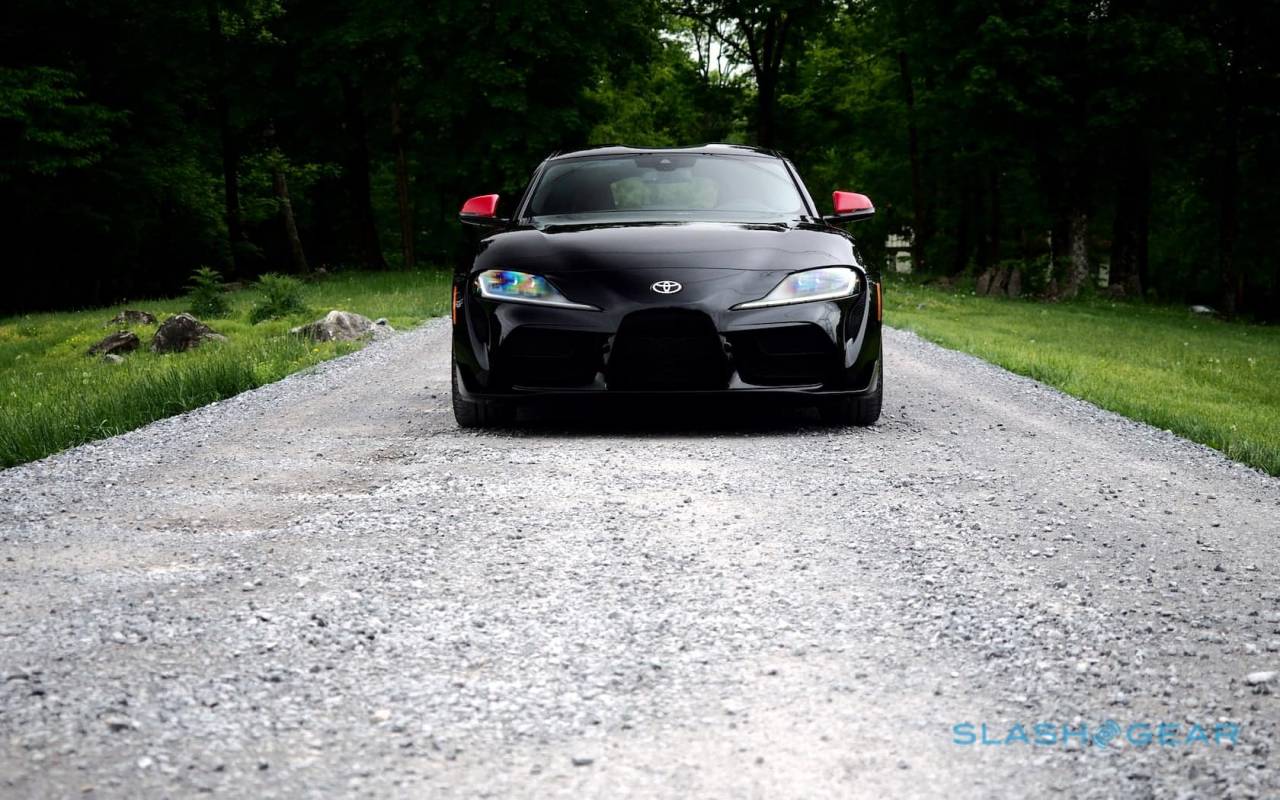 For the moment, any upgrades are likely to be the handiwork of the modding community. Toyota has paved the way for them nicely, too, designing the new Supra explicitly with customization in mind. A recent measuring session at SEMA California, where parts-makers and enthusiasts were encouraged to bring along a tape measure and get up close to the car, proved to have the highest attendance of any such session.

“This is not a car that we needed to make,” Sam De La Garza, senior manager for vehicle marketing at Toyota, explains. “It’s a car that we wanted to make.” Only time will tell whether the fifth-generation Supra can live up to the segment-shaping example its predecessors set for it.