It’s hard to argue with the Mercedes-AMG 43 range, filling the gap between your bread & butter ‘Benz and the potent-but-pricey AMG 63 cars. None exemplify the strategy of balancing power, luxury, and price like the 2017 Mercedes-AMG C43, either. Faced with the opportunity to test out all three variations – sedan, coupe, and cabriolet – I had one big question. Had the AMG spirit been shed along with the big-ticket price?

I confess, the mean black paint-job and matching wheels – with just a little splash of silver on the front lip spoiler and rear diffuser – on the C43 sedan felt the most in-tune with the AMG spirit. Mercedes’ current design language blurs the lines between C, E, and S considerable; more than once, people mistook the C43 for its larger, slightly more powerful E43 sibling. Inside you notice the size difference most in the rear, where legroom takes a hit. 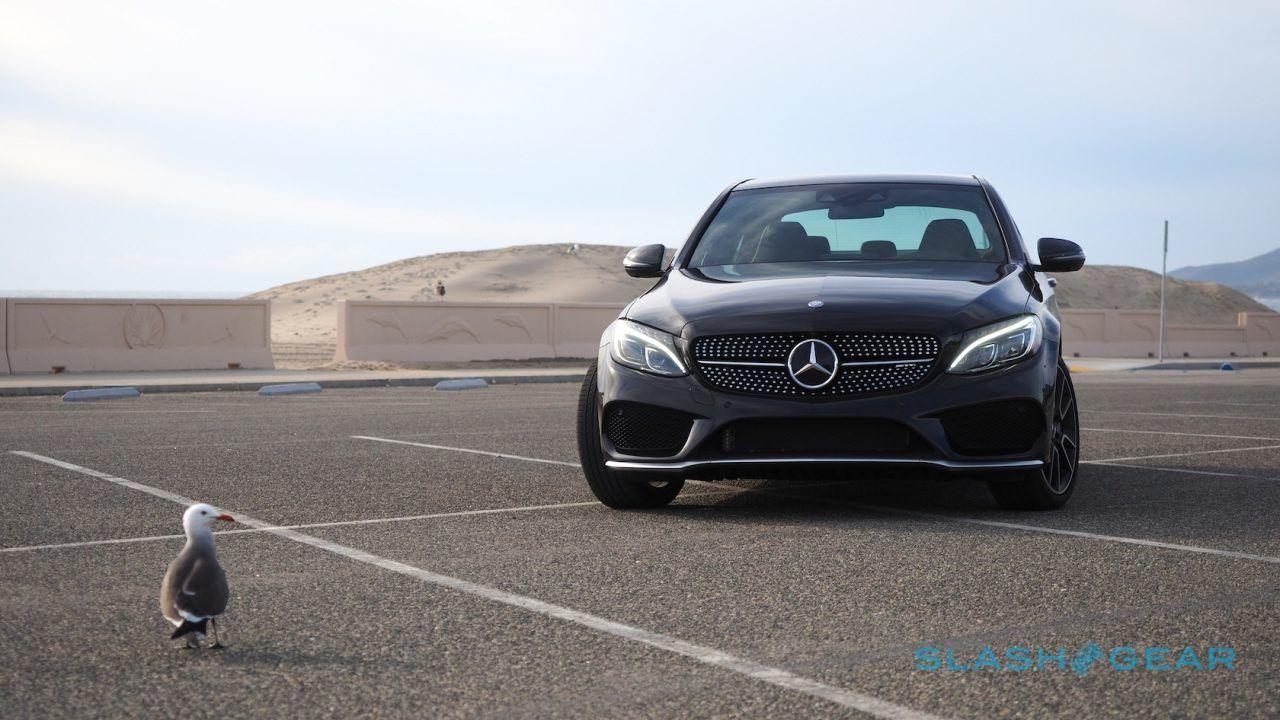 The white C43 Coupe, in comparison, brought a Stormtrooper aesthetic to the party. Perhaps it’s the paint job or the spoiler, but the rear of the two-door looks a little bulky to my eyes. On the upside, though, Mercedes had ticked the sports exhaust option on one of the Coupes it brought along that the sedan lacked, which gives it a thoroughly full-throated soundtrack in return for $1,250 of your hard-earned.

Finally, there’s the C43 Cabriolet. Losing the roof means you hear the powertrain more, which is a plus, but there’s also the inevitable wind buffeting. Mercedes does as good a job as it can to minimize that, and at more sensible speeds there’s no denying that this is on the quiet side for a droptop. All the same, with hood down and all windows dropped, the C43 Cabriolet feels more inclined to cruise than go canyon-conquering. 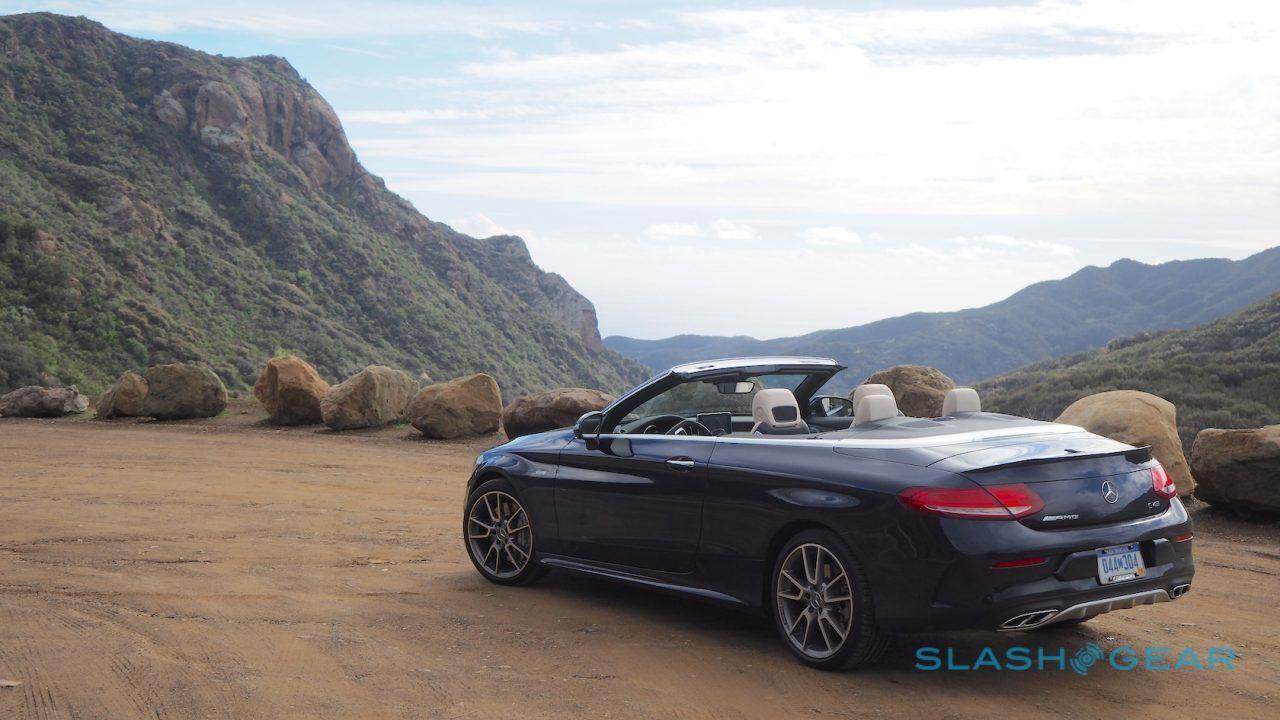 That’s a shame because, like its hardtop siblings, the car has decent power. All three use the same, 3.0-liter biturbo V6 with 362 HP and 384 lb-ft. of torque; that’s slightly less horsepower than the 2017 E43, which straps on larger turbos, but then you’re looking at a car that at 3,759 pounds is almost 400 pounds lighter. Like the bigger sedan there’s an AMG-programmed 9-speed automatic transmission and 4MATIC all-wheel drive, plus sport suspension.

A more affordable price tag has demanded some compromises which AMG purists may decry. Unlike the AMG 63 cars, the engines are made on the regular Mercedes line, rather than hand-built by a single engineer. AMG’s involvement is in tuning, software programming, suspension setup, and the various algorithms that go into a modern car. 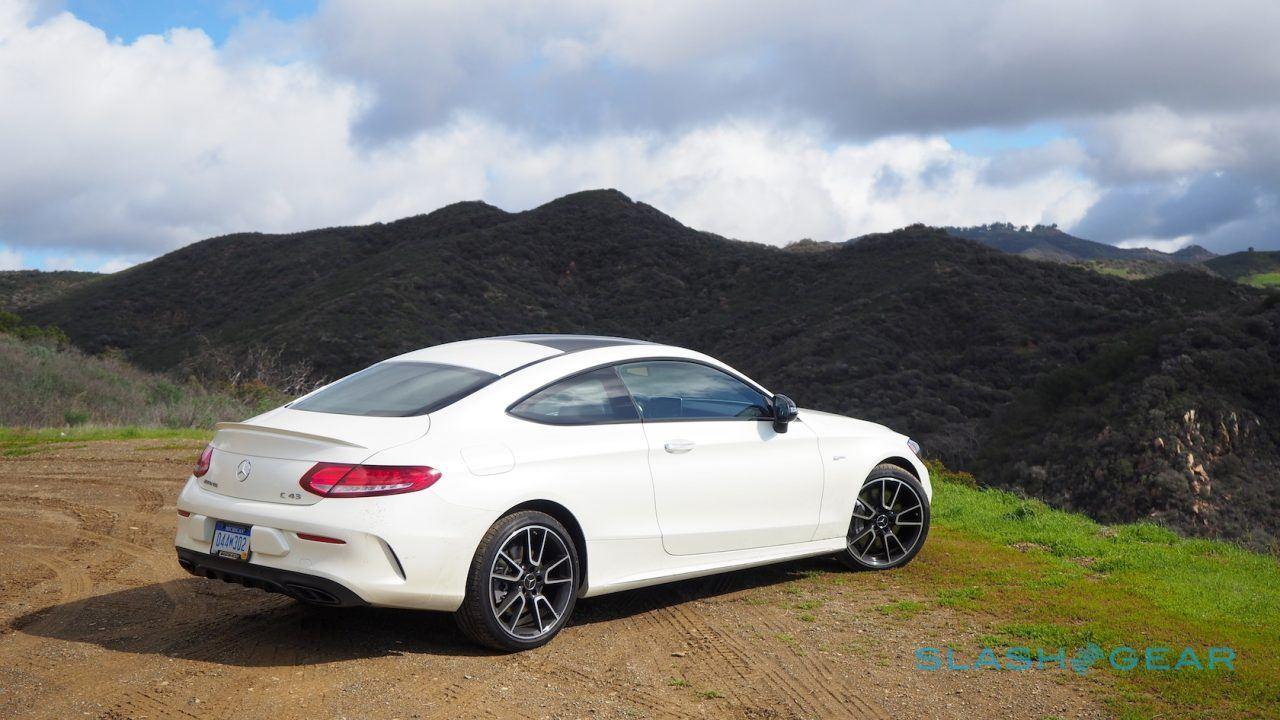 The C43 trio may not have the most power in their segment, but they fall into the “just right” category. In Comfort mode, they waft just like a C300 would be expected to, the 9G gearbox slurring smoothly through its surfeit of ratios and the dampers doing a reasonable job of cosseting across highway potholes. Switch to Sport+ mode, though, and things get a whole lot more interesting.

It’s the usability of the power which I enjoyed the most. From the off there’s a point-and-shoot eagerness, the C43 leaping forward like an over-excited puppy but with none of the tendency to skid sideways. Turning off the highway and up into the twisting roads, all three of the variants showed a welcome enthusiasm to power deep into the corners, pivot, and be off again for the next bend.

At the same time, unlike some performance cars there wasn’t the frustrating sense that you were only tickling the beginning of the power on offer. Big numbers look great on paper, but can end up perversely frustrating if you feel like you could only use them on a rare track day. In contrast, the C43’s abilities are well matched to an enthusiastic driver with some carefree roads to hand. 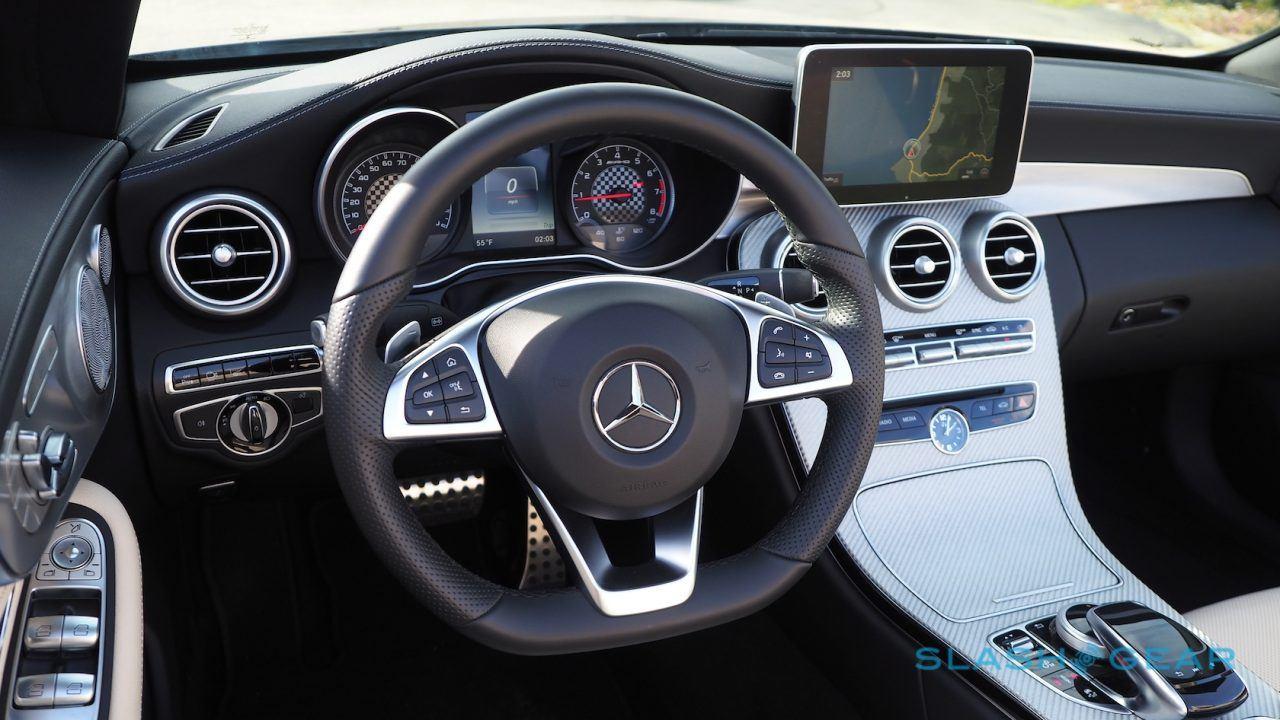 Inside, the $500 AMG Performance steering wheel is a worthy upgrade, with its thick, faux-suede grips, while the COMAND infotainment system is reasonably intuitive with its scroll wheel and touchpad combo. Just don’t sit in the E43, however, because its twin-display dashboard and lashings of tech will, frankly, spoil you. In comparison, the narrow LCD between the C43’s analog gages looks passé, and the screen perched atop the center console is a mere 7-inches unless you cough up the roughly $3k for the Premium package that adds navigation, a power trunk-lid, and a few other niceties. 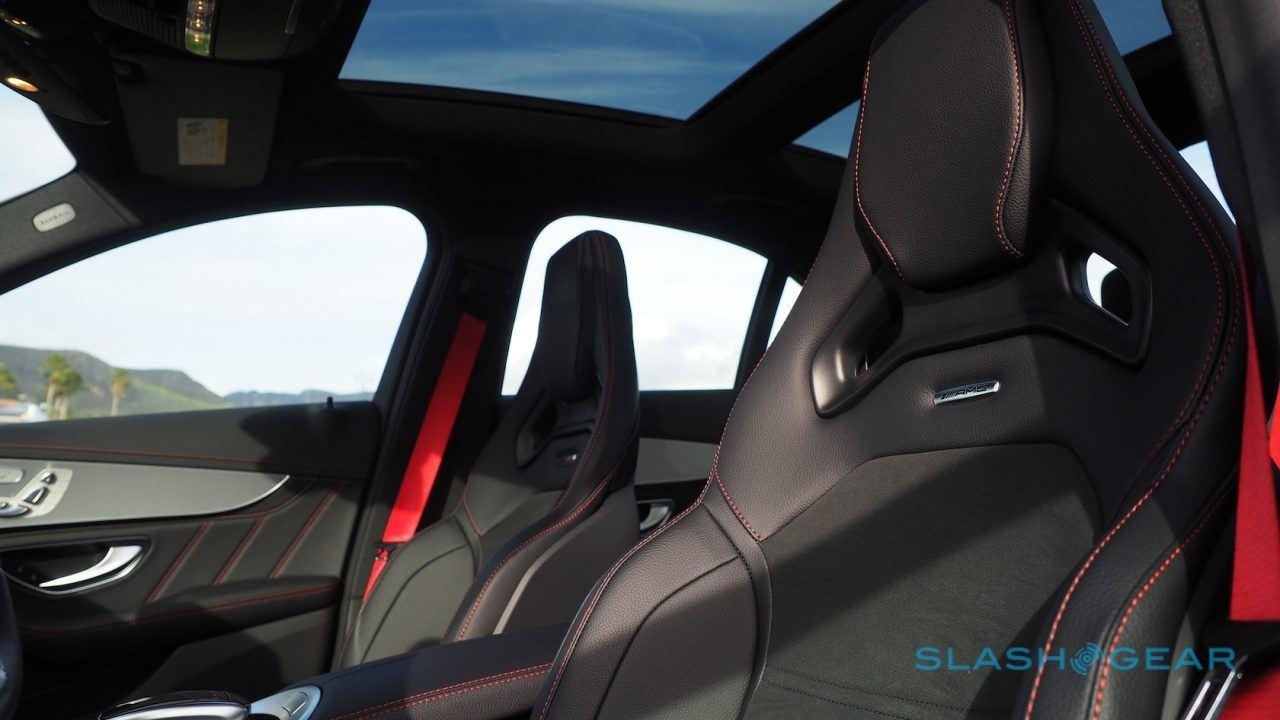 At least the sports seats, with their excellent bolstering and eye-catching red contrast-stitching are comfortable and supportive. Opinion was split on the matching red seat belts; if you’re not a fan, black versions are a no-cost alternative.

That may be a sliver of generosity, but elsewhere it pays to show restraint when it comes to the order form. In base-spec, all three do a good job of delivering Mercedes-AMG’s promise of tweener performance: the C43 sedan starts at $52k, the coupe at $55.5k, and finally the cabriolet at $60.4k. Get liberal with the options, though, and just as I found with the E43, it’s easy to nudge yourself into faster territory from rival brands. 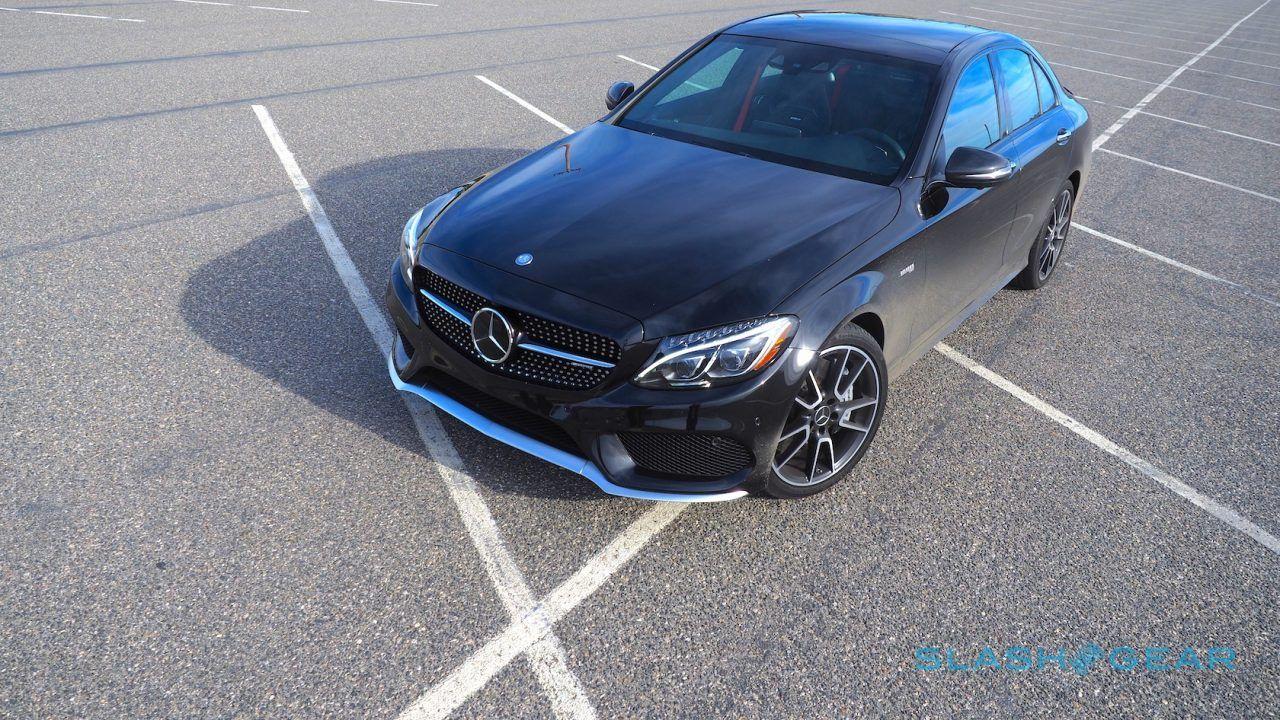 If it were me, I’d go with the basics. The C43 sedan, a mild indulgence to add the 19-inch AMG wheels, and try to resist the lure of the fancy Burmester Surround Sound audio system, the color-changing ambient lighting, and the – I kid you not – cabin fragrance system. Even with the sports seats, you’re looking at around $56k, which finds something of a sweet spot between the less-powerful BMW 340i and the more expensive M3.