You could argue that the 2017 Mercedes-AMG E43 is a double-tweener. Just as the E-Class slots in-between its C and S siblings, so the Mercedes-AMG line sits in the gap between the mainstream Mercedes-Benz series and full AMG cars. The automaker is upfront about the fact that it saw unfilled “white space” between models like the C300 and the C63, and figured there’d be an audience of drivers wanting some of the performance and cachet of the latter but at a more affordable price.

The result is a hedge between two traditions. “All of these 43 models are designed and engineered by the same engineers,” Bernie Glasser, general manager of product management for Mercedes-Benz USA, insists, “as any 63 model.” However, the hallmark of the AMG – that its engine is built by a single person from the 125-strong rank of “master engineers” the company is so proud of at its Affalterbach facility – isn’t carried over to the 43 range. 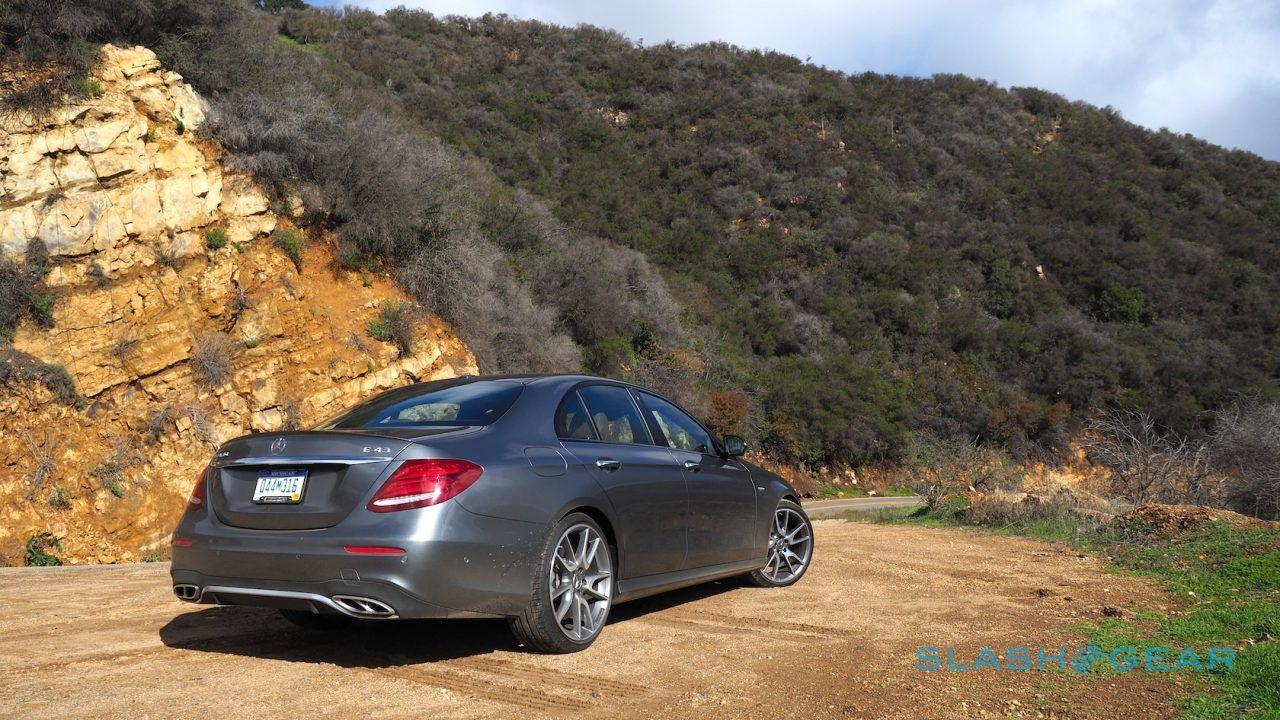 Instead, Mercedes-AMG fettles the 3.0 liter biturbo V6 engines produced in the existing Mercedes-Benz factories with new software and upgraded turbochargers. The 9G-TRONIC transmission also gets a software makeover, tweaked for faster shift speeds; the 4MATIC AWD (which all Mercedes-AMG bar the SLC43 have as standard) is reprogrammed, as is the sport suspension and AMG Dynamic Select air body control. Lift the hood, and the splash of red across the engine cover distinguishes the powertrain from its Benz brethren, but you don’t get the fancy plaque with a builder’s name.

Buyers don’t seem to have minded its absence, however. The AMG division sold 23,361 cars in 2016, up 33-percent over the previous year, and with “much of the growth” down to Mercedes-AMG according to Glasser. There are now nine models in the line-up, running the gamut from convertibles and coupes through sedans and SUVs. 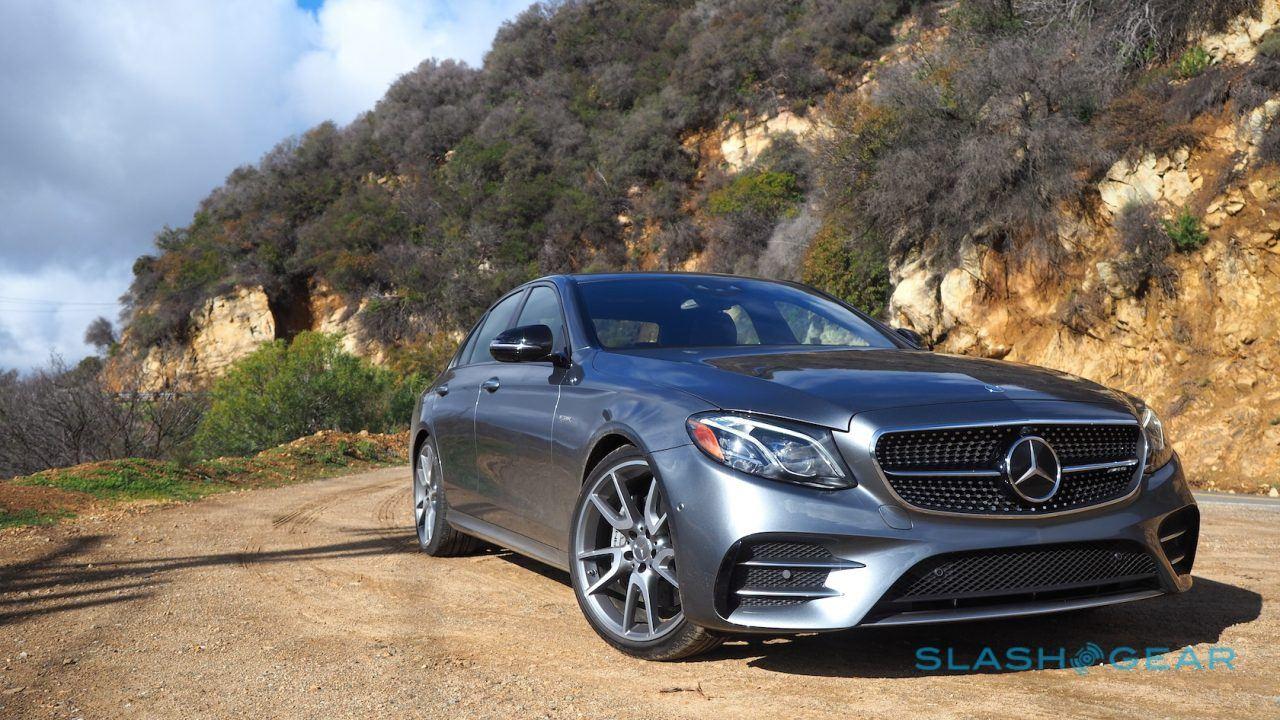 From the outside, there’s an aggressive body kit with a new front grille – punctuated by shiny little hexagons – more pronounced vents in the lower spoiler, and a fairly subtle lip-spoiler on the trunk lid. Beefy 20-inch AMG 5-Twin Spoke wheels are a welcome $750 upgrade, shod in this particular case with summer rubber. The whole thing looks handsome and purposeful, though Mercedes’ current design language does leave the C, E, and S-Classes looking fairly similar at first glance.

Inside, Mercedes-AMG has sensibly ticked many of the boxes the E300 leaves as paid upgrades. Most noticeably, the twin 12.3-inch widescreen displays that top the dashboard are fitted as standard, as are the pair of optical joysticks on the steering wheel. They replicate the scroll wheel and touchpad down in the center console, by which the majority of the car’s systems are accessed, though the E43 does have a reasonable number of dedicated buttons and switches for one-touch access.

It’s fair to say there’s a learning curve involved if you want to make the most of the E43’s talents – everything from connected apps through color-changing ambient lighting to the perfume spritzer in the glove compartment – but the essentials readily satisfy. The $500 AMG Performance steering wheel upgrade is pleasingly chunky, with grippy Alcantara inserts that match those in the Nappa leather seats, while the shift paddles are cool aluminum. AMG sport seats balance comfort and support perfectly. A wheel in the center console steps through the five drive modes: Eco, Comfort, Sport, Sport+, and finally the customizable Individual setting. 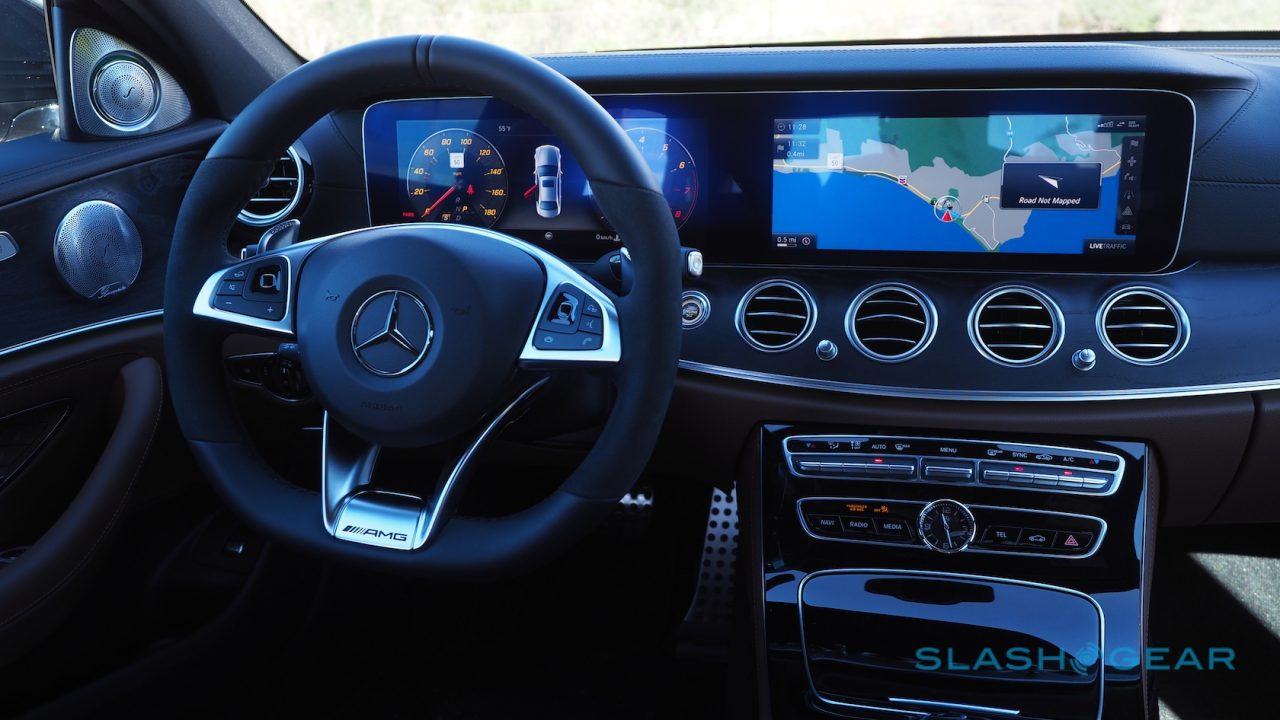 After a brief highway stint in Comfort to make sure the E43 hadn’t sacrificed ride comfort in the name of performance – it hasn’t – I switched up to Sport mode upon reaching more interesting canyon roads. AMG may have opted for a V6, not a V8, but turbo lag is less noticeable than in the engines with more cylinders. Though the paddle shifters feel great, and snick through the nine ratios rapidly, the AMGified transmission arguably does a better job of its own accord, what with support for double-declutching and multiple downshifts in one fell swoop. If there’s a flaw, it’s occasionally clunky downshifts at low speed, particularly noticeable when you’re cruising to a halt at the lights, with the 3rd to 2nd change prompting a slight but noticeable hiccup.

Pushing hard into a switchback corner provoked some unexpected rear wheel wiggle, quickly correct but still nudging me into selecting Sport+ mode. That clamped down on the E43’s errant butt, and revealed exactly what AMG can do with 4TRONIC and the sport air suspension. You also get a far more interesting soundtrack, with periodic rasping huffs from the tailpipes; things under the hood sound best at above 50 mph or so, and downshifts come with a healthy throttle blip. 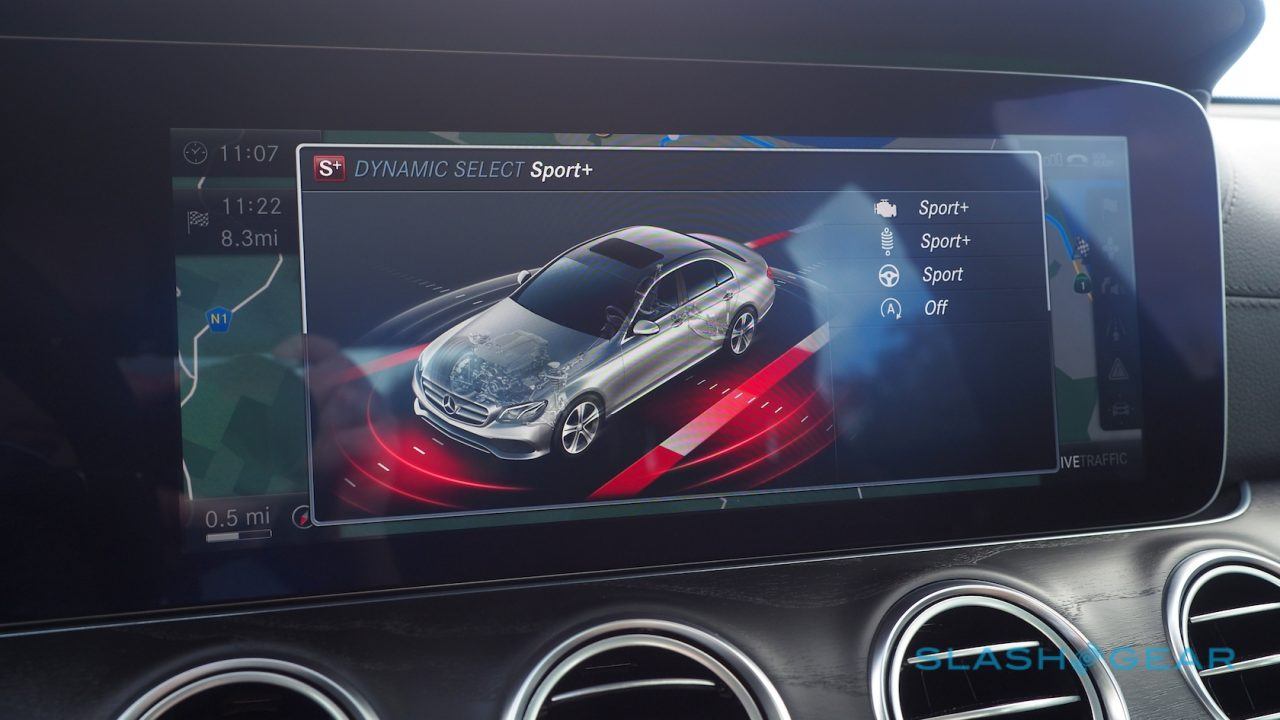 While the car may be AWD, it’s biased 31/69 toward the rear. Nonetheless, there’s a stickiness in Sport+ mode that suits real-world backroads, even if track fans will probably want to wait for the upcoming 612 HP AMG E63. There’s some body roll to the E43 that even the trick dampers and air suspension can’t entirely disguise, and which doesn’t let you forget that this is a 4,145 lbs car. Happily the brakes are up to the task: there are four pistons up front and sliding calipers on the rear, and though they prefer a firm foot they nonetheless work well.

Though Mercedes’ standard-fit list is comprehensive, there are a few costly extras that tickles the E43’s price skyward. Atop the $72,400 sticker you can add the $7,300 Premium 3 Package, with massage seats, wireless phone charging, auto lights, adaptive cruise control with auto-lane-change, lane keeping, a head-up display, blind-spot assistance, and heated front seats, among a wealth of other niceties. For $1,100, the automaker will fit more cabin insulation, and put acoustic and heat-absorbing glass in the windshield and side windows. All the better to hear the sweet-sounding – but, at $4,550, not inexpensive – upgraded Burmester 3D Surround Sound System.

In all, and with a few more enhancements, the car in these photos came out to $89,565. That finds it in the company of some serious alternative metal. A Cadillac CTS-V may not have the same badge cachet but it’s $4k cheaper and comes with 640 HP; the 2017 BMW M5 starts at a scant $5k more. 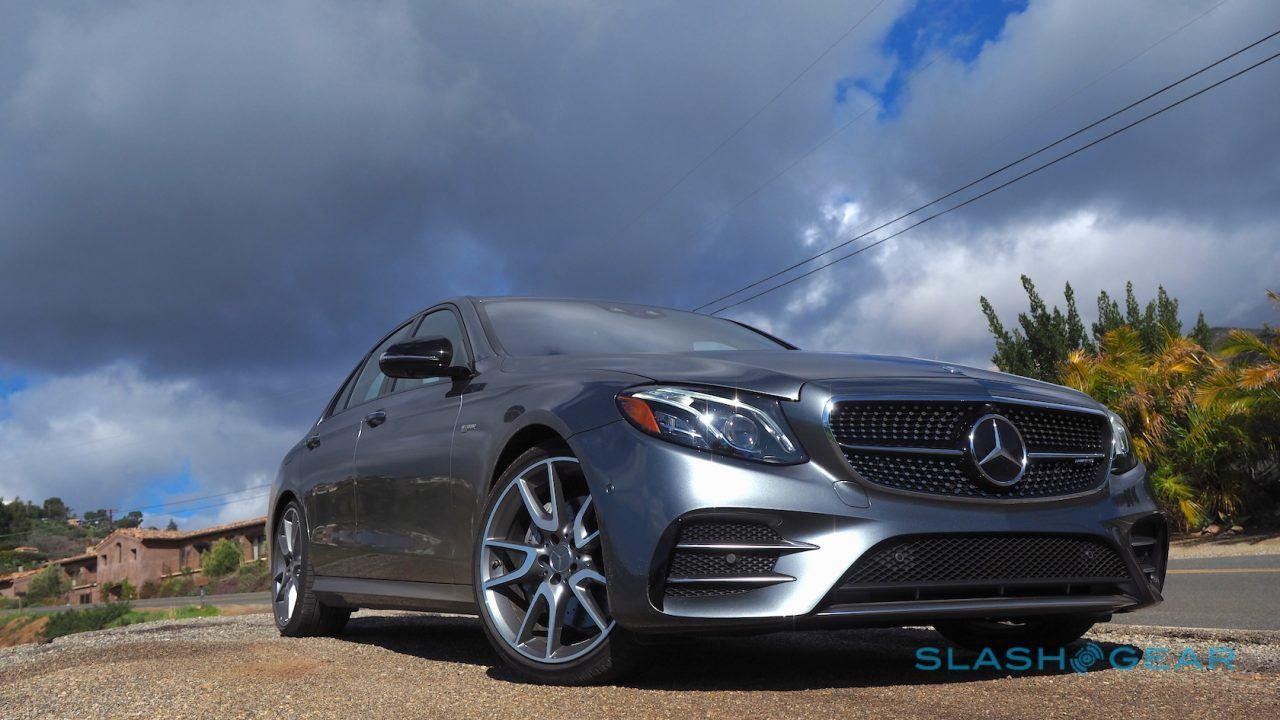 Avoid the upgrades, however, and the AMG E43 lines up against the BMW 550i xDrive and the Audi S6. Mercedes’ starting price is slightly higher, but then again its standard equipment is better, and both the quality and gadgetry of its cabin are a step ahead of its German rivals. Whether that’s sufficient for you to ignore the fact that it’s the least powerful of the trio is a matter of personal preference.

For me, the E43 feels the most cohesive of the AMG 43 family. No, it’s not as outlandishly crazy as a “true” AMG, but its performance is eminently usable. That goes for whether you’re pushing hard in sweeping canyons, or cruising in the cosseted splendor of its beautifully designed, segment-above cabin. That two such different cars are at either spectrum of a simple drive mode dial is impressive enough, but Mercedes wraps them up with dramatic looks and the most cutting-edge dashboard gadgetry in the automaker’s line-up.