As I’ve discovered on several occasions, often it’s only when you go topless that things start to make sense. Ford‘s 5.0 liter Mustang is a good example: when I drove the 2015 coupe last year, I questioned the need of such a large, naturally-aspirated V8 when the company’s EcoBoost engines were so polished.

Chop the roof off, as is the case with this 2016 Mustang GT California Special convertible, and those five liters make a lot more sense because all of a sudden you can hear them in action. 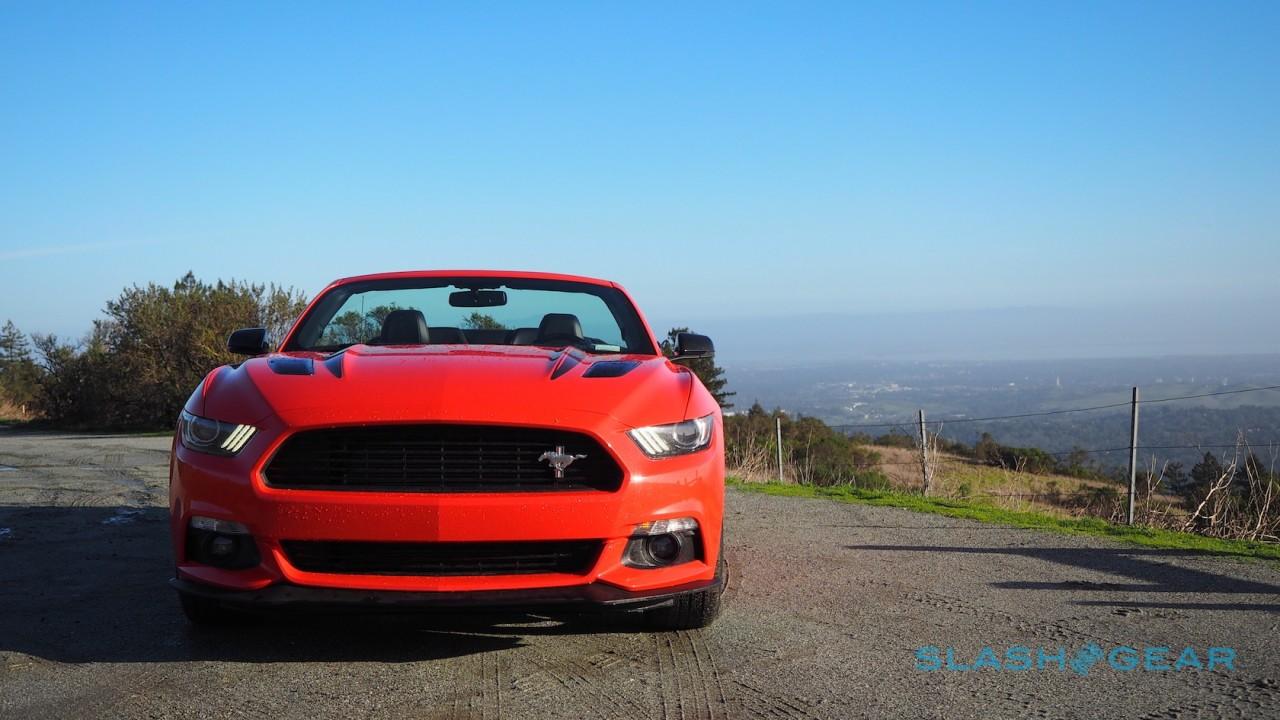 First things first, though, and clearly someone in Detroit didn’t get the message that California is going green, not orange. In this case it’s a rather eye-searing “Competition Orange”, complete with contrast black pin-striping and grilles. I’m not entirely sure I’d pick the color were it my $47,380, but it’s certainly noticeable, and the 19-inch black-painted wheels earned me no small number of approving comments.

Where you sit on the Mustang style issue depends on how comfortable you are with retro cars and how attentive you are to Ford’s detailing. I think it’s still a pretty car, particularly from the front three-quarters with its claw-slash daytime running lights glinting, though the rear is starting to look a little fussy, and of course trunk space is on the small side – just 11.4 cubic feet – given that it’s a convertible. 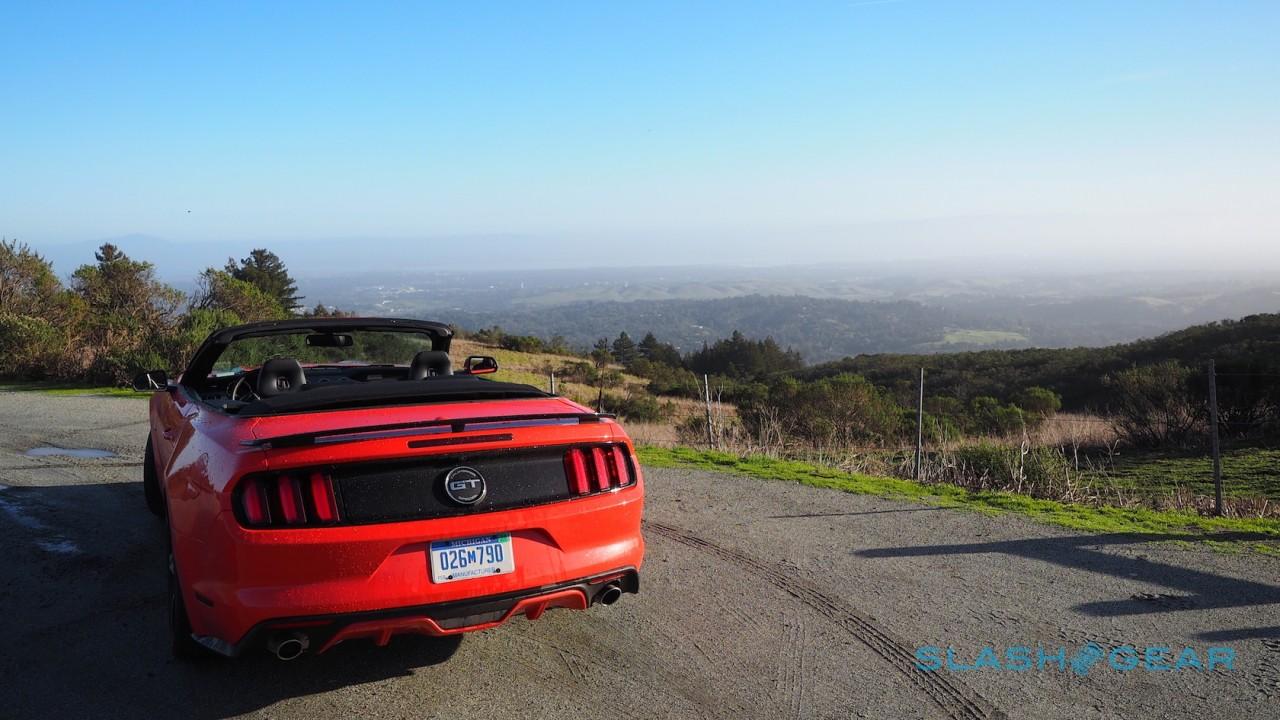 Dropping the roof is a straightforward process, though not quite one-button simple. There’s a big handle to pull down and twist to unlock the fabric hood from the windshield, after which point a button sends it motoring back behind the vestigial rear seats that should probably be considered extra storage rather than suited to human occupancy. It takes about ten seconds in all.

Though the coupe is probably the more practical Mustang option, I’m not sure sensible should take priority here. While removing the roof gave my anemic British skin a chance to bask in what winter sun California could muster, more importantly it let the full throat of the V8 be heard. 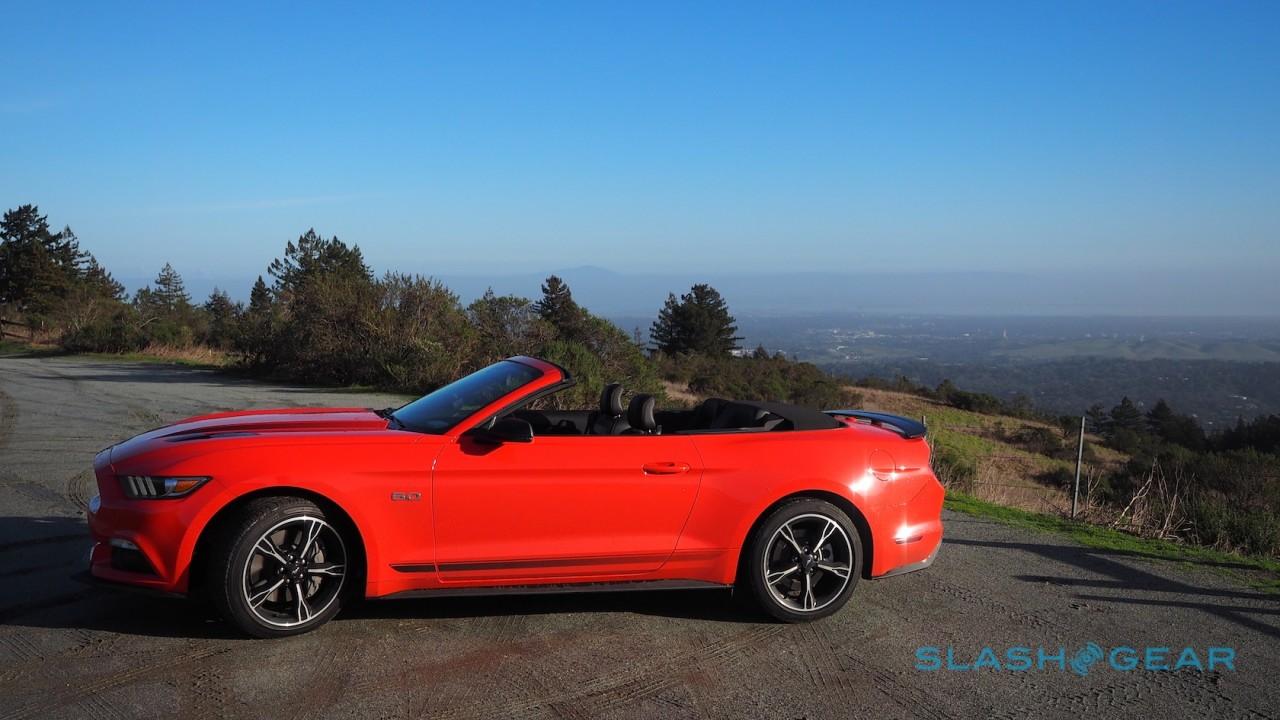 Listen, there’s nothing wrong with Ford’s EcoBoost engines. Yes, they’re down on power compared to this V8 – 310 HP versus 435 HP, and 320 lb-ft. or torque versus 400 lb-ft. – but peak horsepower and torque both arrive sooner than in the naturally aspirated engine, and the economy gains are what you might expect when you’re looking at less than half the capacity.

EcoBoost doesn’t give you that V8 bellow, though – we’ll leave the merits of the turbocharger soundtrack for another day – and you hear it loud and clear when the Mustang goes topless. All of a sudden I could understand the full appeal; the fact that the six-speed manual transmission of this car was far less agriculturally crude than the version in the 2015 coupe I drove helped considerably, too. 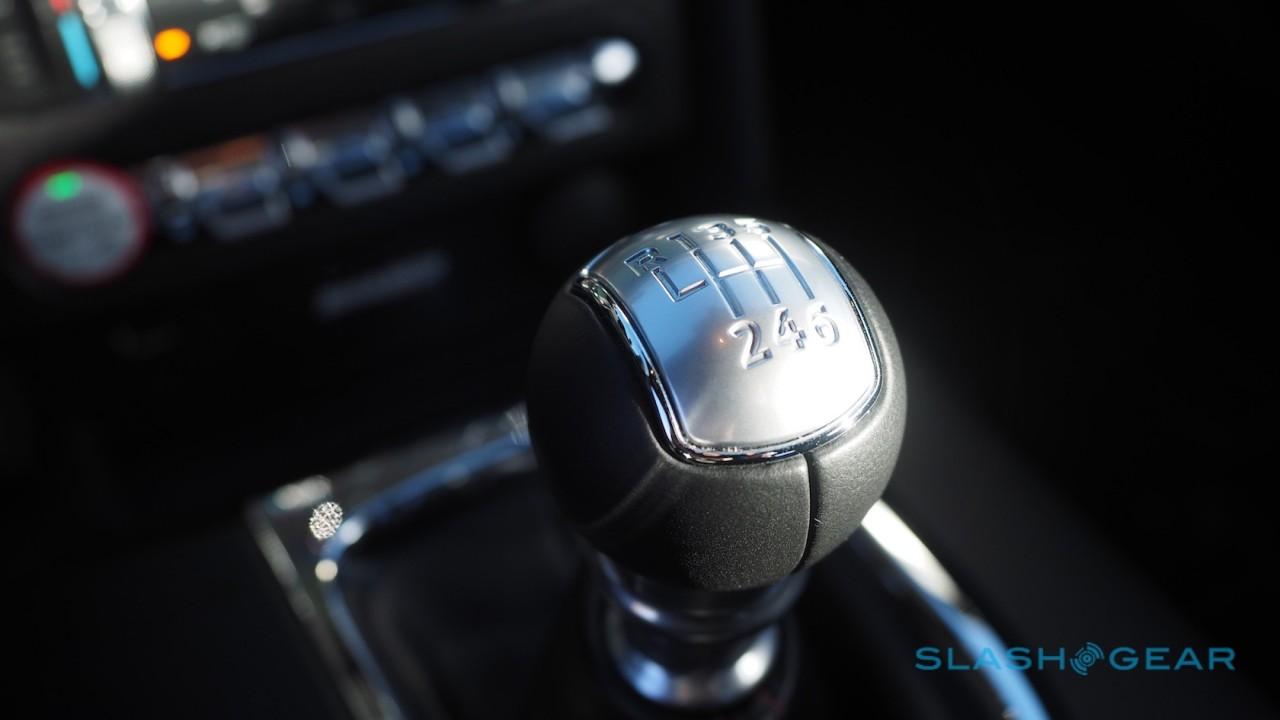 No, low speed traffic is never going to be as convenient with a manual as it is with an automatic – something Ford will charge you $1,195 for – but hearing the interplay of clutch, gears, and engine adds a welcome extra aural tickle.

There’s even only a scant penalty in fuel economy with the six-speed, with the EPA suggesting 15 mpg in the city, 25 mpg on the highway, and 19 mpg combined. Wet roads curtailed some of my fun, but helped with a 20.4 mpg average in my own testing. 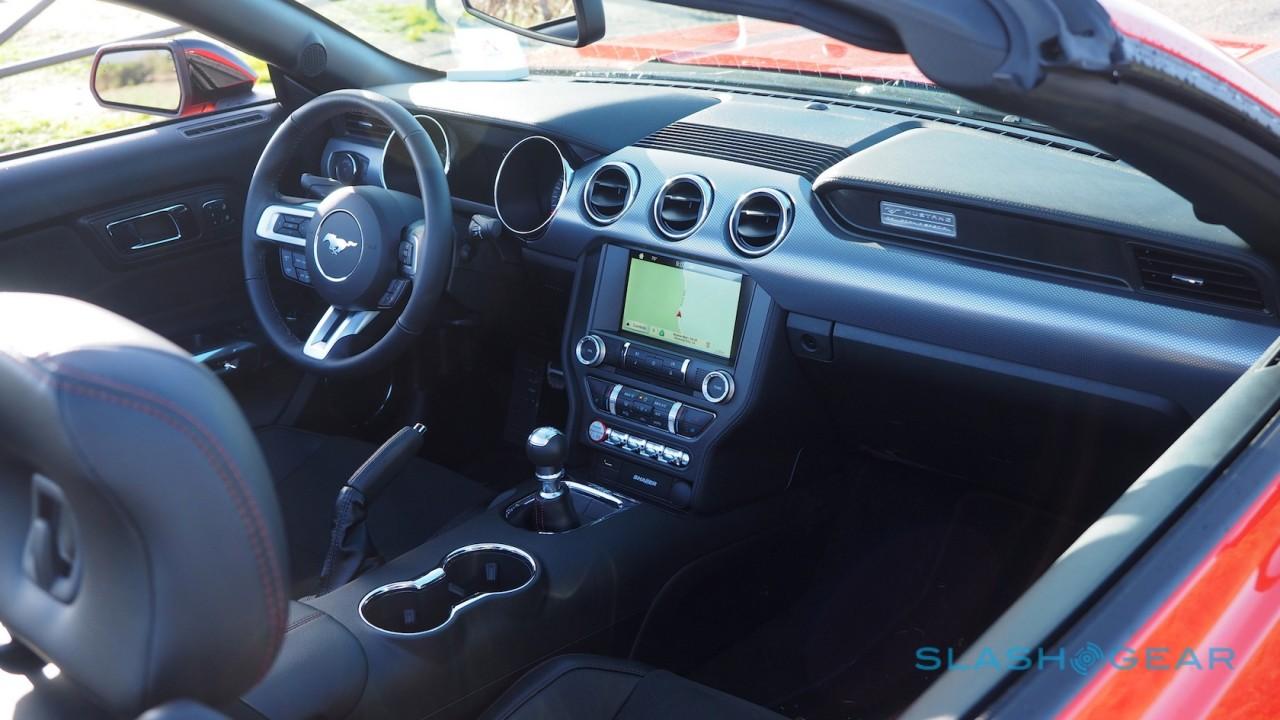 For $1,995, the California Special gives the Mustang’s interior a polish, with grippy suede inserts in the leather seats and contrast stitching on seats, doors, and other trim areas. Otherwise, though, it’s the same dimly-lit retro cave as before, better looking to the eye than the switchgear feels to the fingertips.

Happily the old MyFord Touch infotainment system has been retired on 2016 cars, at least those with Premium level trim, and replaced with SYNC 3. It’s still not my favorite platform, but it’s a huge improvement over the painful system of before: quicker and more responsive, and with a more intuitive interface. 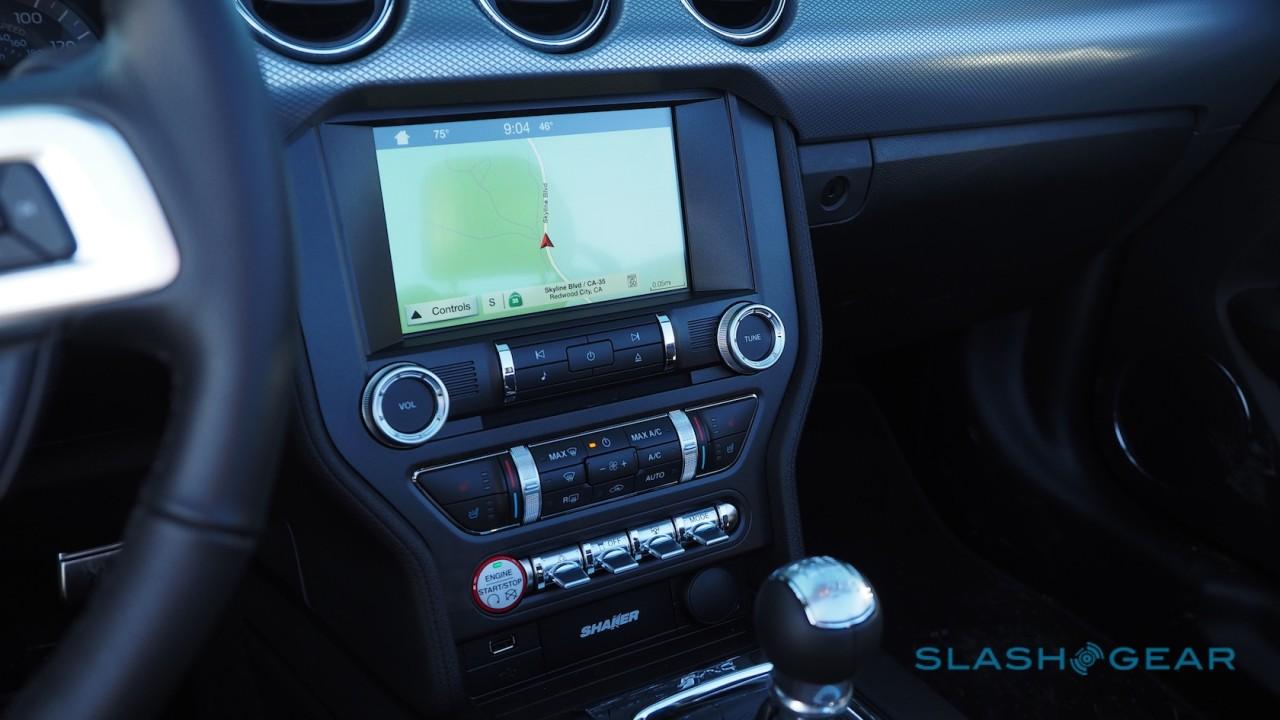 Sadly there’s still no interaction between the 8-inch touchscreen in the center stack and what you see in the smaller driver display between the speedo and tachometer. Navigation is a $795 upgrade.

As for the $1,795 Shaker Pro audio package, which throws twelve speakers into the cabin, it struggles a little to compete with the engine’s soundtrack. 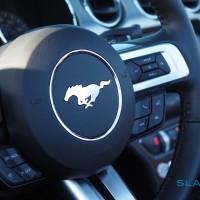 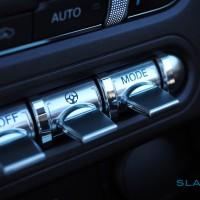 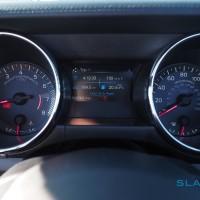 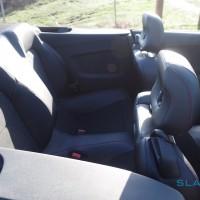 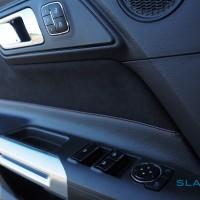 I gave up on music and let the Mustang do its own singing. The California Special package includes a strut tower brace which promises to stiffen the body and help cut down on the usual sprinkle of shimmy cutting the roof off a car can introduce. That and the independent rear suspension – the solid axle thankfully retired in this sixth-generation car – helps keep flex to a minimum, though the ride can be bouncy on less-than-perfect roads. 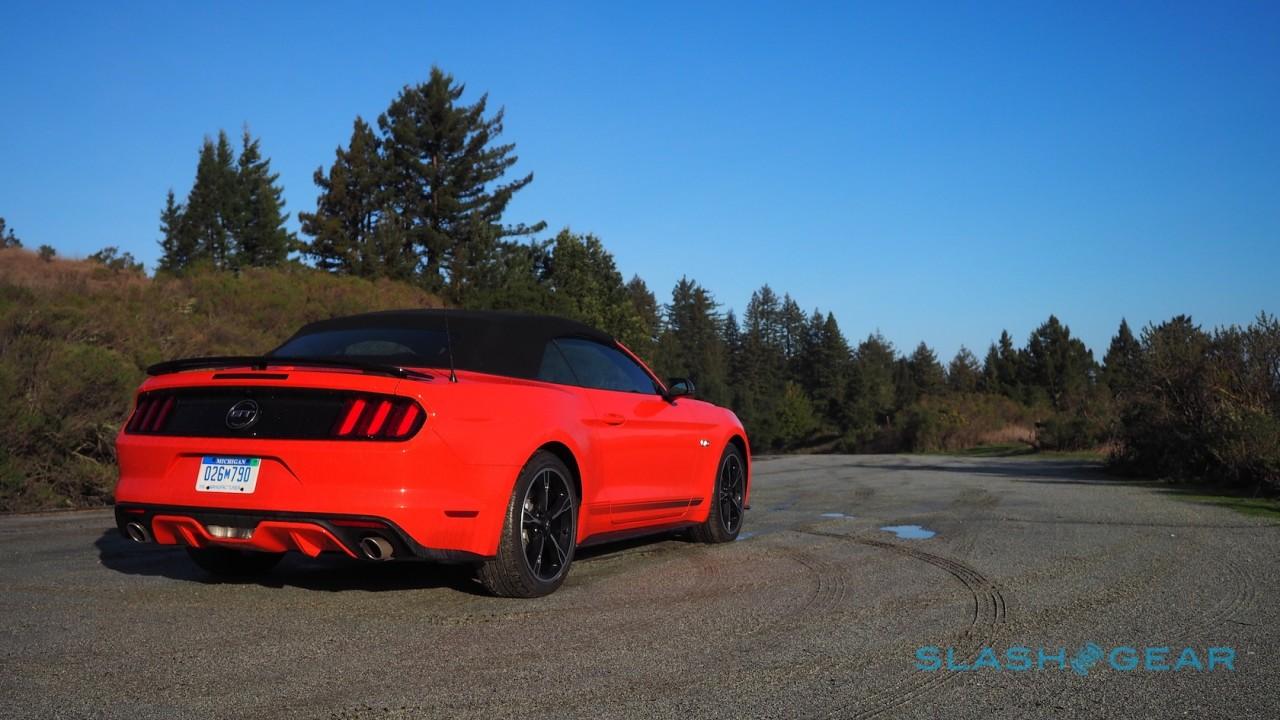 In the EcoBoost’s favor, still, is the cut in curb weight. A Mustang with the turbocharged engine is around 200 pounds less than the V8’s 3,705 pounds, all in the nose, and you notice that in the corners. Slowing considerably for turns – the brakes neither grumble nor scream their proficiency, but they do the job – and then powering out with all five liters howling not only keeps you on the road but plays to the GT’s strengths. 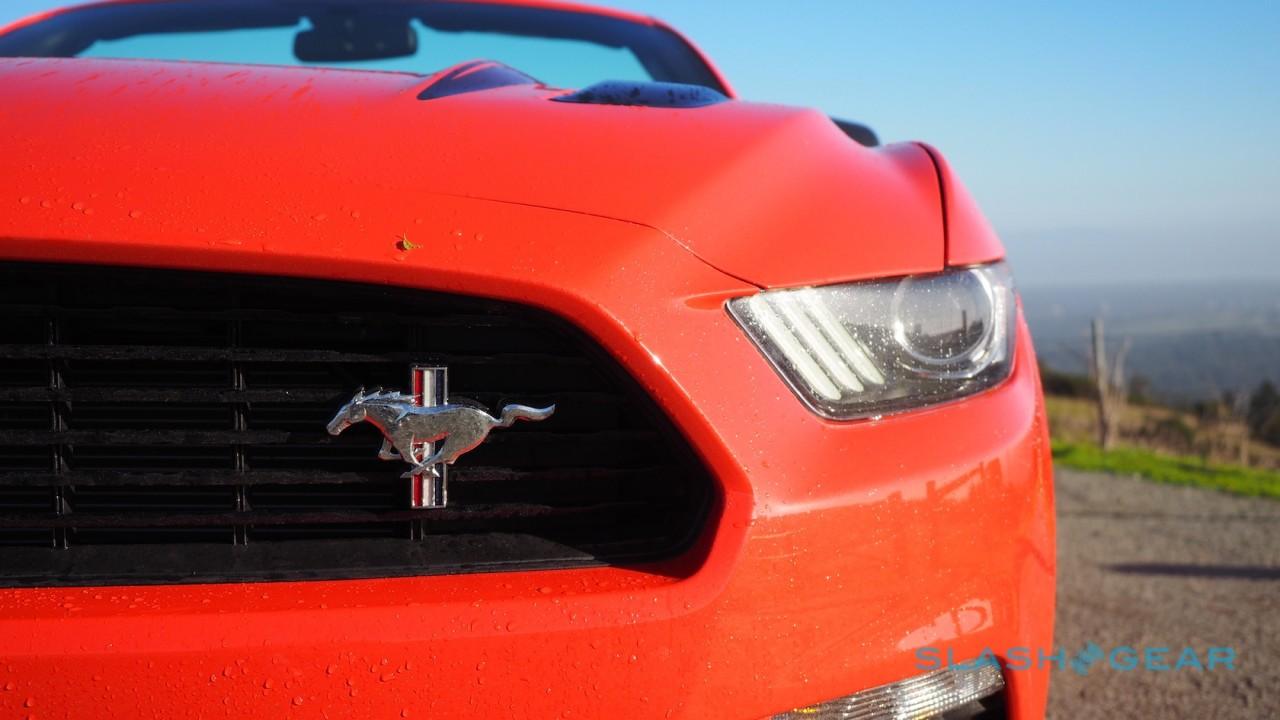 With a starting price of $41,895 for the GT Premium Convertible, going topless in a V8 Mustang isn’t cheap. Ford’s entry-level V6 slips in under the $30k mark for open-air motoring, in contrast, while the excellent EcoBoost is a smudge over $35k.

Personally, I’d do without the California Special glitz and the other various upgrades, and try to stick as close to that minimum price as possible. After all, the two things you’re really looking for here are the V8 and the drop-top that allows you to hear it properly. You won’t have the most refined convertible out there, nor indeed the fastest, but I suspect that Mustang GT wail will help you overlook such quibbles when you mash your right foot.