You could make a solid argument that the GT is the “true” Mustang. No compromise V6, and no fancy-pants EcoBoost turbo; the GT packs Ford‘s naturally aspirated 5.0 liter V8, with the performance and soundtrack to match.

In GT Premium form, it’s good for 435 horsepower and 400 lb-ft of torque. It’s also matched with a six-speed manual transmission as standard, though a six-speed auto with the de rigueur paddles is a $1k option. 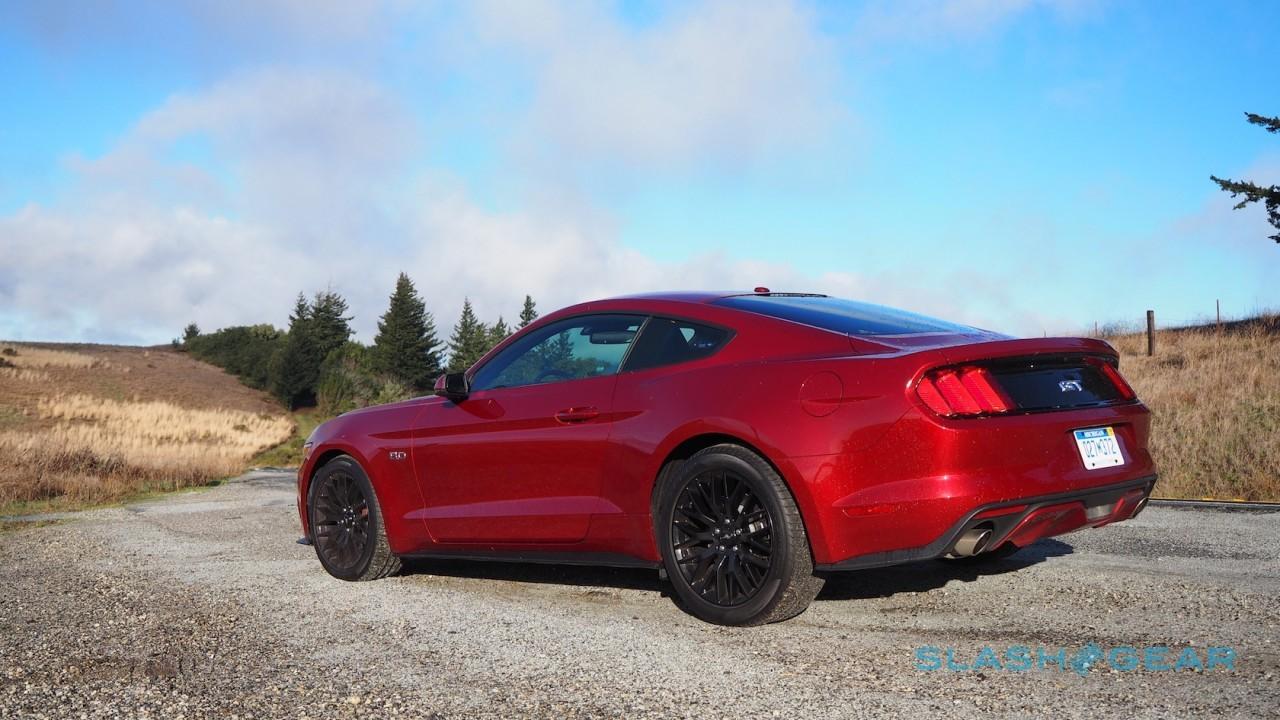 Stab a finger at the engine start button and the V8 gurgles into life with a satisfyingly eager grunt. The clutch is on the long side and heavy, though you can finesse it for traffic; better, though, to hit the throttle and pump your left foot as you begin the increasingly pleasing slam through the rising gears.

If ever there was a car that encouraged rough treatment, the Mustang GT is it. With memories of the MX-5 Miata’s silky little transmission still haunting my brain – yes, it’s been months since I last drove a Miata, but Mazda’s gearbox really is that good – the meaty, blunt throw of Ford’s box felt almost agricultural at first, but you soon realize the Mustang is a masochist not a ballet dancer, and treat the shifter accordingly. 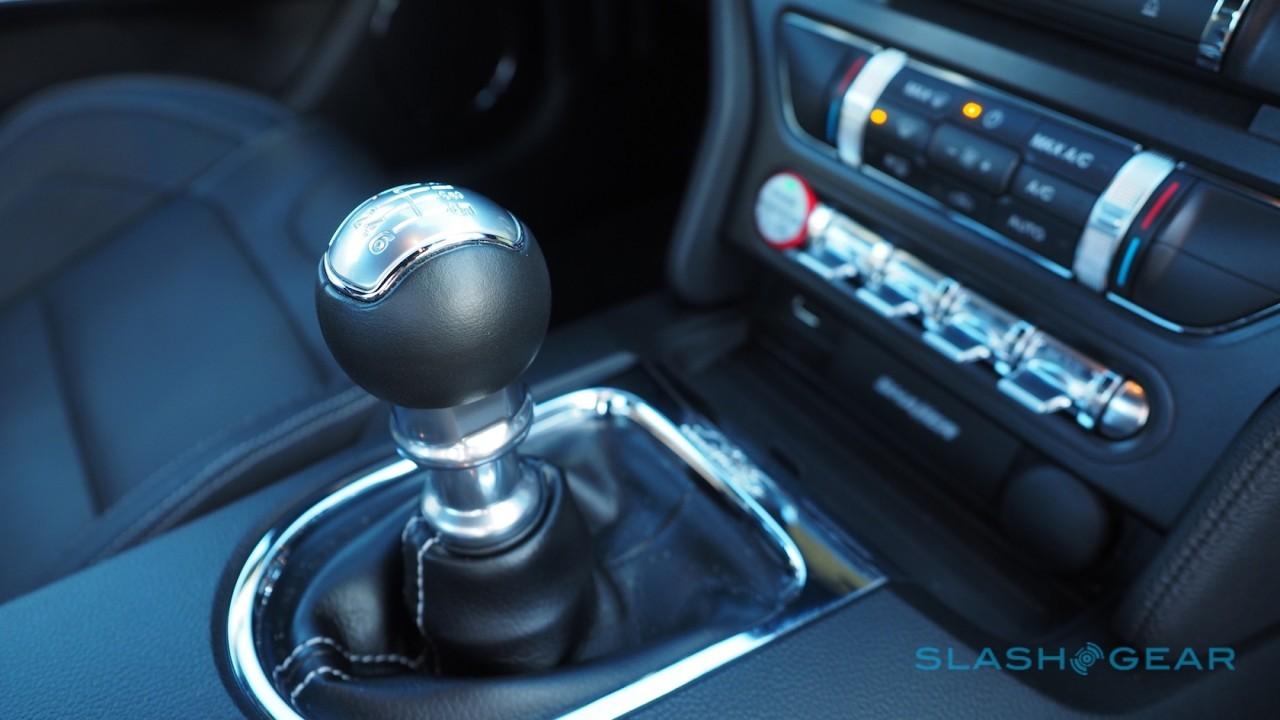 What you get in return is a car that rises to the challenge. Ford may have done wonders for the sixth-generation Mustang’s design, weaving just enough of the spirit of the original with modern details and crisp, taut lines, but the real magic is underneath.

Gone – and not missed – is the solid rear axle, replaced with an independent system that means the GT stands a fighting chance of not getting embarrassed (or going off-road, for that matter) when things get twisty. 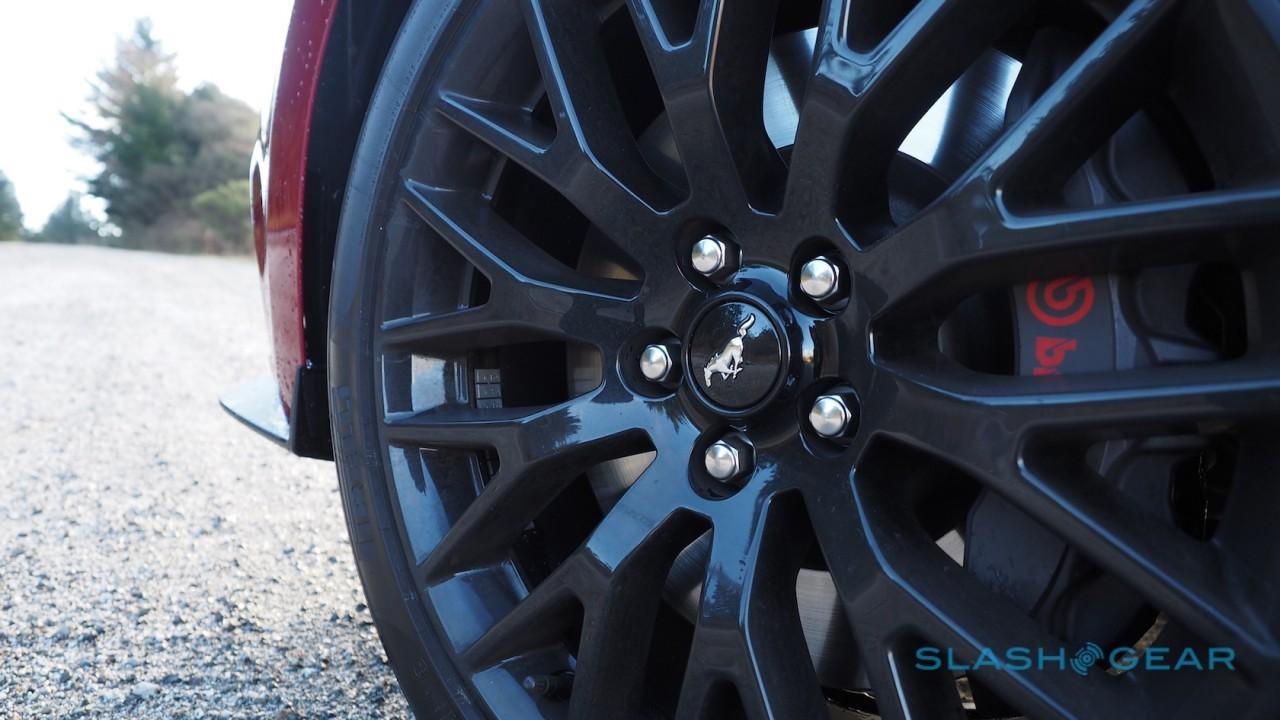 The result is a firm ride, though without the bounce or harshness the old car was often criticized for. Though you can’t defeat the laws of physics, and that big engine leaves the Mustang front-heavy while you’re cornering, there’s certainly grip to be had. The optional 19-inch wheels with their Pirelli PZero rubber – part of the $2,495 GT Performance Package that also deletes the rear spoiler, among other things – help there, too.

Better, and certainly more fun as I discovered, is to opt for the standard pony car fare of hauling on the excellent Brembo brakes, slowing for the corners, then relying on the lashings of torque to catapult you out again. Power doesn’t seem in short supply no matter the gear you’re in, and the V8 bellows all the way up to an entertaining 7,000 rpm. 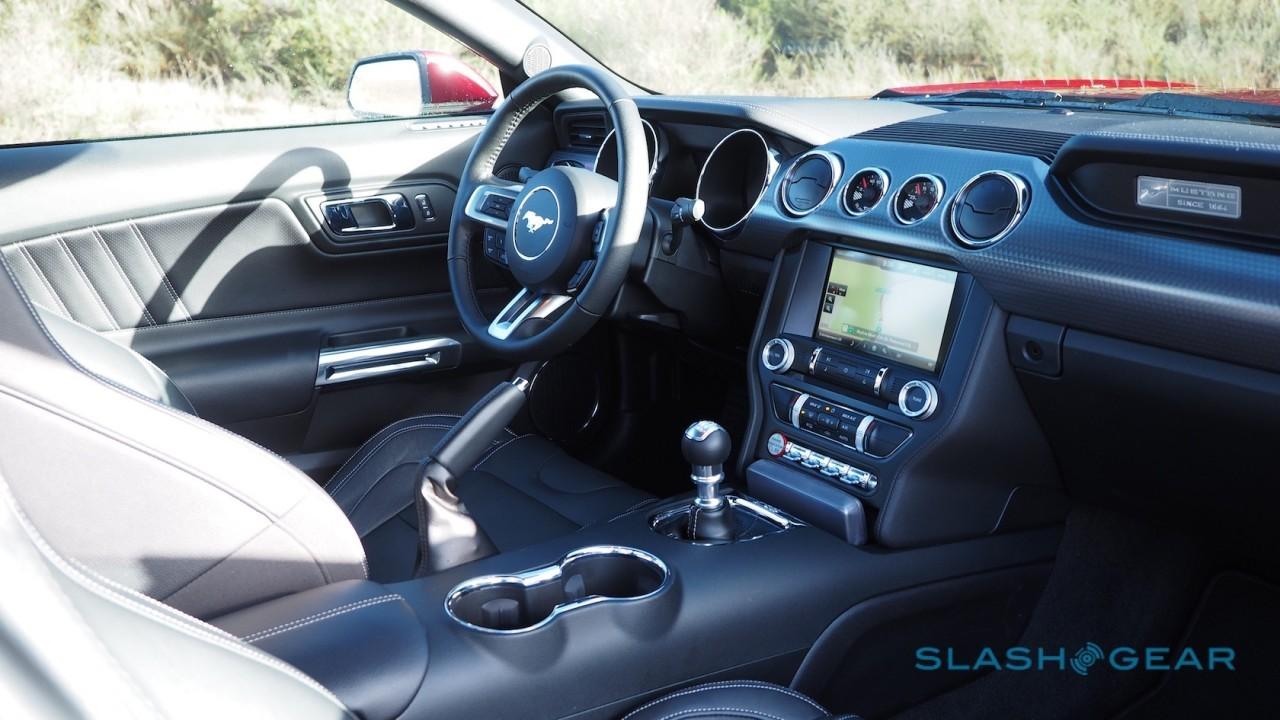 The interior is a mixed experience. It certainly looks the part, Ford’s shiny bank of toggle-switches and analog gages walking the narrow line between retro-chic and just plain old-fashioned. The “Since 1964” badge and “Groundspeed” legend on the speedo edge a little closer to tacky, but the GT does at least have the lineage and pace to match.

Unfortunately, things go downhill when you actually reach out and touch those controls. If the switches are real metal then Ford deserves kudos for finding the most plasticky-feeling example; the stitched door panels are nice, but the rest of the dash suffers from hard-plastic syndrome. 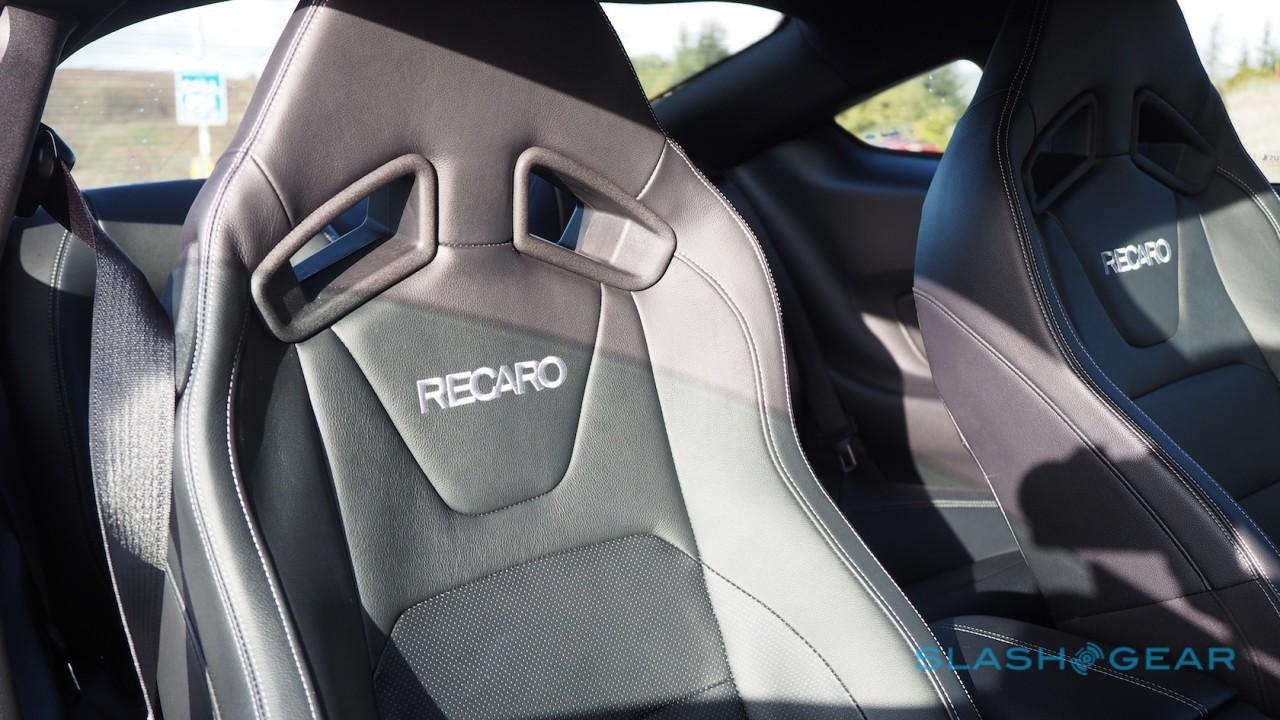 I can’t complain about the leather Recaro seats, a $1,595 option, and which the only bad thing I can say about is that they lack heating and might prove a little snug if you’ve a larger build. The standard seats get electric adjustment, heating/venting, and Mustang badging, but I’d gladly swap them for the comfortable Recaros.

The same can’t be said for the $795 voice-activated navigation, mind, which seemed reluctant to the point of outright stubbornness to find me the swiftest route. Ford’s MyFord Touch infotainment system is cleanly organized, but it’s not as slick as the newer SYNC 3 which thankfully comes as standard on the MY2016 car. 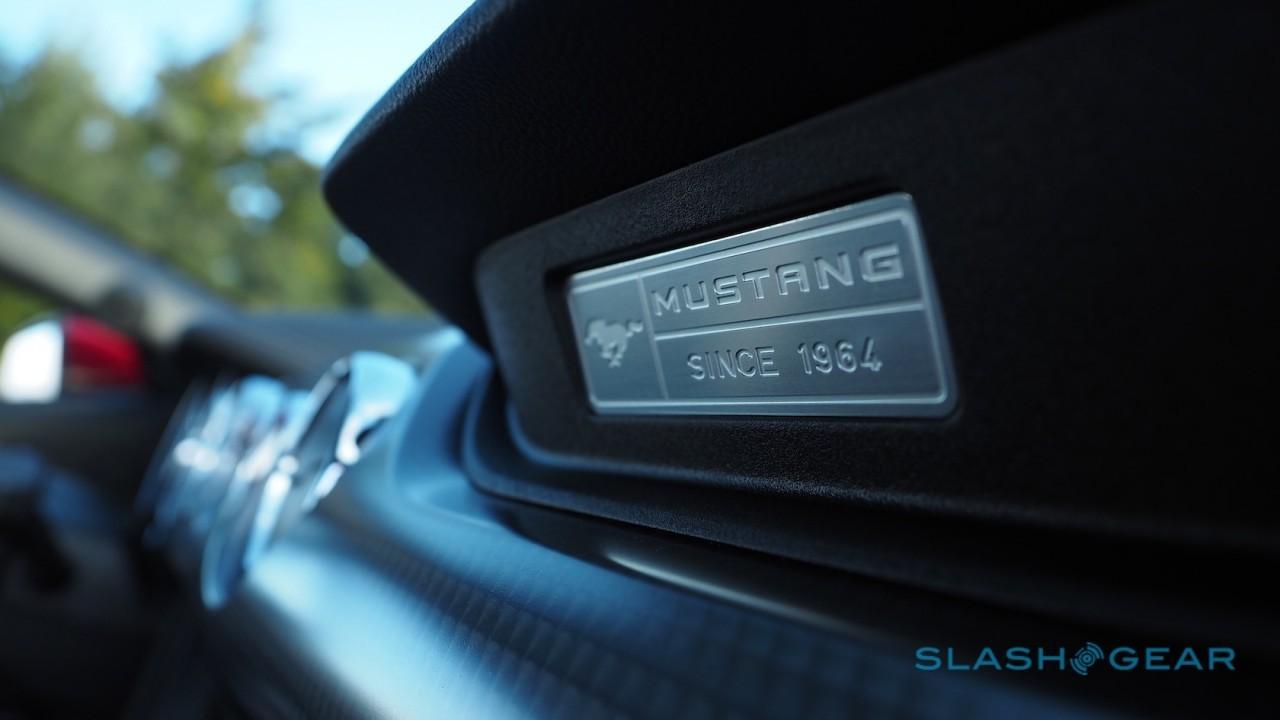 Though the Mustang GT may be a four-seater, the back is only really fit for small children. Even with the driver’s seat set to suit my 5’8 frame, rear legroom was vestigial. Think of it more as an augment to the surprisingly usable trunk space, and it starts to make more sense.

Ford figures 15 mpg in the city, 25 on the highway, and a total of 19 combined; even with some eager driving, I managed over 18 mpg after a couple hundred miles of mixed roads. Still, if you want economy, go for the EcoBoost. 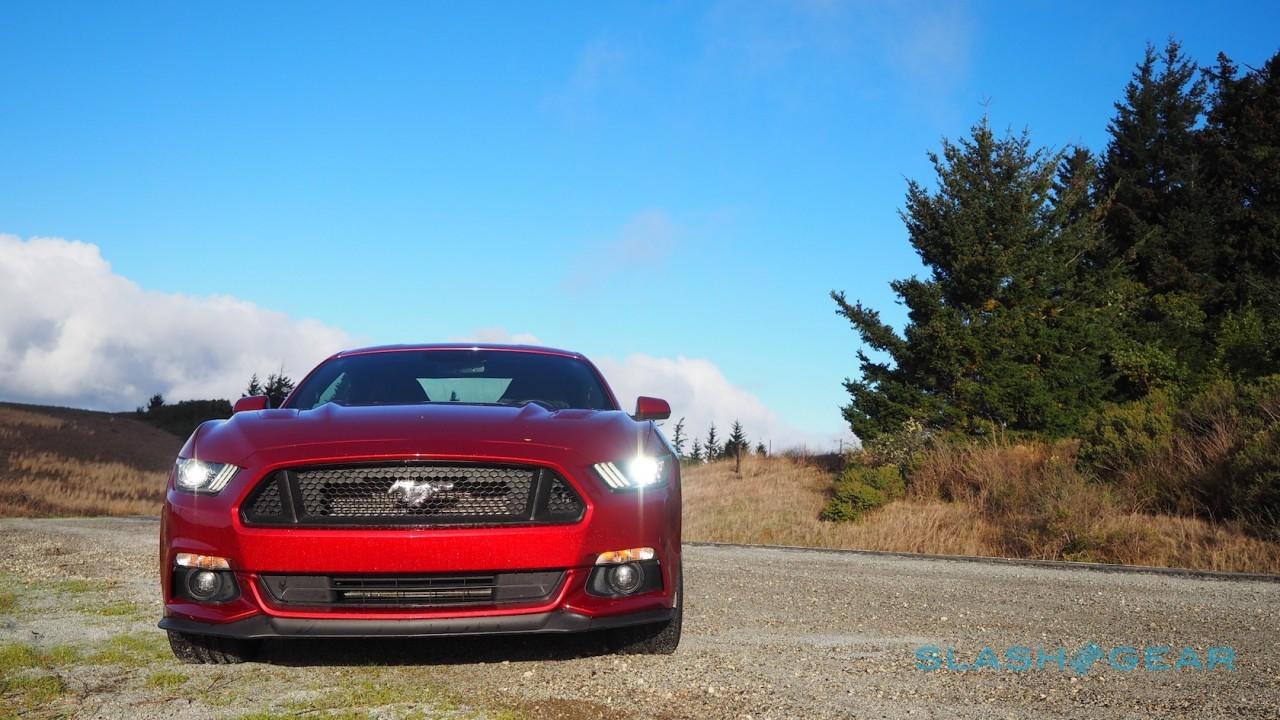 You can get a lot of car from a wide variety of places for that sort of money, though – the excellent new Camaro excluded – most lack the Americana legacy the Mustang has in spades. The EcoBoost might be the model you buy with your head, but the V8’s charms affect heart and loins, and make the GT the Mustang to have this side of a Shelby GT350.