Facebook CEO Mark Zuckerberg shared a series of photos from Oculus this afternoon, showing off a next-generation innovations well before release. This place goes by the name of Oculus Research and can be found in Redmond, Washington. This department is led by former Valve gaming head Michael Abrash and is responsible for handling such oddities as the VR-friendly gloves in the photo here with Zuckerberg slinging VR webs like Spider-Man.

It’s likely the gloves we’re seeing here on Facebook have something to do with Oculus’ acquisition of the “Pebbles Interfaces” group back in July of 2015. Pebbles Interfaces had their fingers on the pulse of the VR universe all the way back in the Spring of a couple years ago – literally. At acquisition time, Pebbles Interfaces’ CTO Nadav Grossinger suggested that they were all about “pushing the limits of digital sensing technology to accelerate the future of human-computer interaction.” 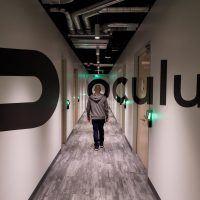 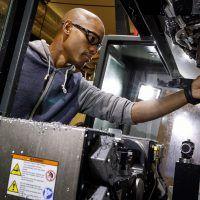 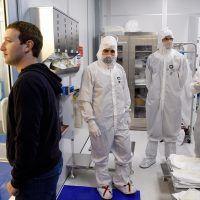 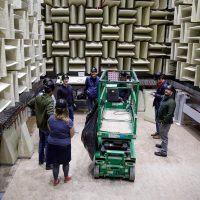 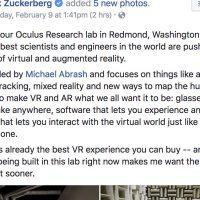 Below is a video showing what Pebbles Interfaces was capable of back at the start of the year 2015. Since then – with Oculus at the helm – they’ve most certainly gone miles ahead. Imagine a pair of gloves – or indeed a full body suit – able to be viewed by the wearer in a virtual reality environment. Interaction to the max.

ALSO NOTE: While this bit of info might seem like a random release of awesome teasers for the future of Oculus, it comes suspiciously close to another news item this week. Earlier today it was made apparent that Facebook was shutting down 200 VR demo stations at Best Buy stores throughout the United States. That news could be perceived as a bad sign for Oculus’ near future. Zuckerberg showing how awesome the future of Oculus is with these photos could very, very easily stem the tide and make Oculus headlines positive once again.

The same goes for Zenimax VS Oculus court news. It’s going to be a lot better PR situation for Facebook if the headlines reflect the future for Oculus, rather than the past.