If you thought you’d seen the strangest bits and pieces of the Oculus VR saga this week, you’d be wrong. Just this morning it was announced by none other than game programmer, optimization specialist, and technical writer – and gaming hero – Michael Abrash that he’d left Valve. Abrash heads to Oculus VR after working for with Valve since 2011.

Abrash previously worked with John Carmack – also now with Oculus VR – on Quake after having been asked to join the Id Software once having met up with Carmack after Doom was first released. Carmack is one of the minds that brought the world Doom, and with Abrash, he went on to work on Quake. After working on the beginning of Quake, he worked with Microsoft on natural language research, on Xbox, and with RAD Game Tools. 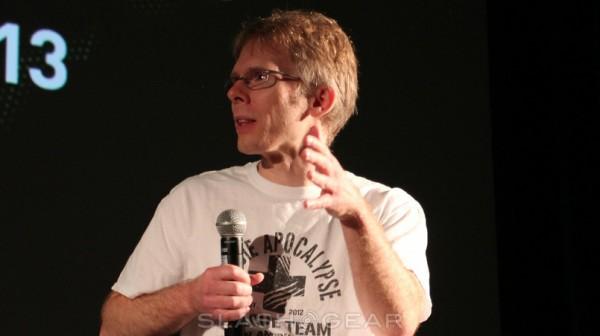 Abrash co-wrote the Pixomatic software renderer – acquired later by Intel – and in 2011 he moved to Valve. It was Gabe Newell himself that aimed to get Abrash onboard with the team, and it’s not entirely clear how it finally came to be that he made the jump, but he has made quite a massive statement on the subject – part of which is here:

“If I hadn’t come across Ready Player One at the right time. Heck, if I hadn’t come across Snow Crash all those years ago, or the Doom alpha, or known John from the M&T bulletin board, or if I hadn’t known Gabe Newell and Mike Harrington from my days at Microsoft, in which case I would have had no reason to help them license the Quake source code…

You get the idea. We’re on the cusp of what I think is not The Next Big Platform, but rather simply The Final Platform – the platform to end all platforms – and the path here has been so improbable that I can only shake my head.” – Michael Abrash, Oculus Chief Scientist

Below you’re also going to see a video of Abrash speaking at this year’s Steam Dev Days. Here he speaks about Virtual Reality and the future of the hardware and software world around it.

We’ll see a lot more on Abrash and his work with Oculus VR soon. For now you’re going to want to take a trip down recent news lane in the timeline provided below. Oculus VR has just been acquired by Facebook, if you did not know, and they’re going big.