Readying itself for the likes of Chromecast, PlayStation 4 (already on PS3), Google TV, and more, YouTube has been updated this week in its iOS and Android forms. This app already allowed the user to play any and all (save no-mobile) videos with ease, now the app will allow users to watch a video or Cast a video. This added bit of functionality had worked with devices like the Nexus Q and PlayStation 3 and Google TV in the past, but here we’re seeing a “preview” screen appearing along with the ability to add said video to a queue.

Updating the YouTube app on your Android or iOS device this week will allow you to take part in Google’s newest and cleanest user interface yet, this part of an overarching smoothing-out of Android apps that’ll be taking place over the rest of this summer. This update brings on the browsing of channels for playlists as well – that’ll bring you the “play ALL the videos” ability you’ve heard so much about (if you’ve never seen playlists on your desktop computer, that is). 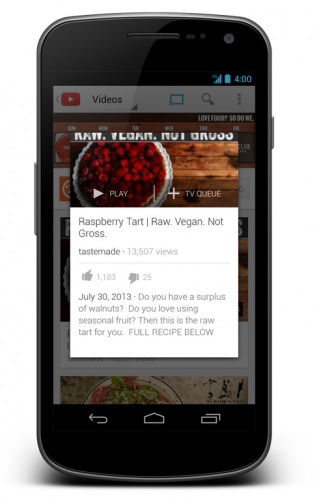 One of the strangest updates to YouTube in this push is the second screen. Like you were using a Samsung Galaxy S 4 (or something similar), you’re now able to watch a YouTube video while you’re searching for another YouTube video to replace it. All you’ve got to do is hold your finger on a video and drag downward.

Now we get to see if such an ability is actually useful, or just there for kids to show their parents that they’ve got a better handle on the mobile universe than they once expected. 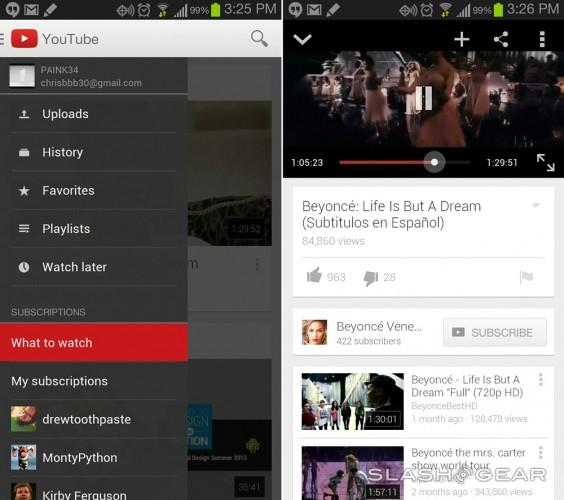 Once a video is placed in the lower right-hand corner of your display, you have the ability to go back to full screen with a swipe upward or to dismiss said video with a swipe to the right. This update should be available for both Android and iOS devices (like the iPhone and iPad) right this minute – have at it!