Your hoverboard will now get you arrested in NYC

This week the NYPD made relatively clear that self-balancing scooters or “hover boards” are now illegal inside the city. The call was made this Monday, believe it or not, as Tweeted (also believe it or not) by the New York Police Department’s 26th Precinct Twitter account. There it was said that “the electric hoverboard is illegal as per NYC Admin. Code 19-176.2.” Strangely the tweet was deleted not long after being sent. No tweet or tweet, the law remains.

This ruling comes not long after London ruled something similar. You can find the code with FindLaw, where it suggests that several features must be in play for the vehicle to be an “motorized scooter” – then being illegal in the city of New York. 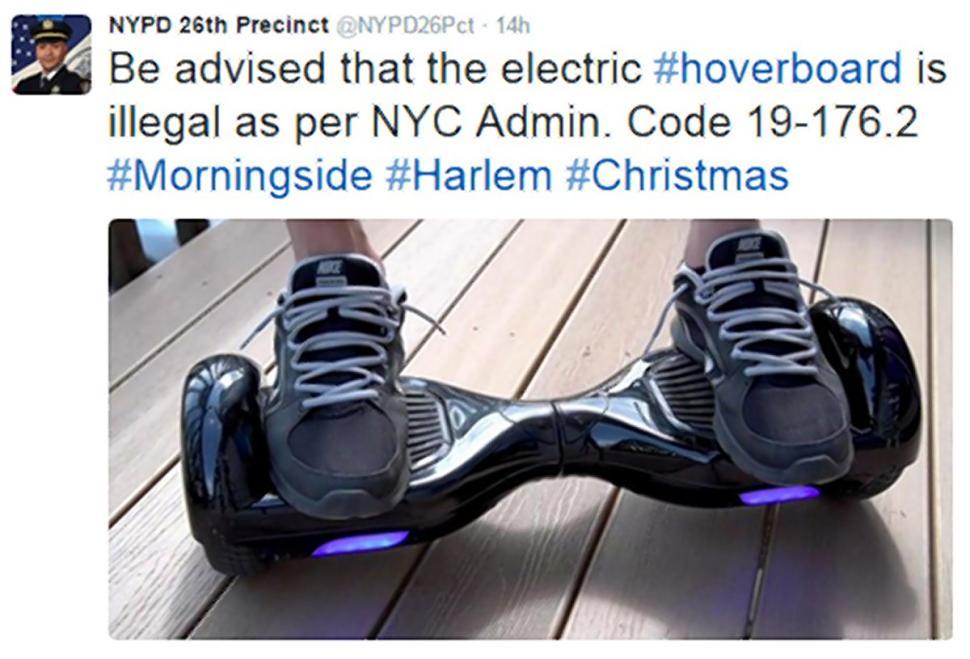 1. Any wheeled device that has handlebars that is designed to be stood or sat upon by the operator.
2. Is powered by an electric motor or by a gasoline motor that is capable of propelling the device without human power.
3. Is not capable of being registered with the New York State Department of Motor Vehicles.

“No person shall operate a motorized scooter in the city of New York.”

Oddly it would appear that “this section” of the law does not include wheelchairs, mobility aids for the disabled, or “‘electric personal assistive mobility devices’ defined as self-balancing, two non-tandem wheeled devices designed to transport one person by means of an electric propulsion system.”

Does that sound like one of these hover boards to you?

According to the New York City Department of Transportation speaking with Gothamist, these self-balancing boards are 100% illegal, anywhere they’re being used inside the city of New York. And the state, as it were.

According to the NYC Department of Transportation, Article 14 of NY Vehicle and Traffic Law includes the two-wheeled machines in their definition of a motor vehicle, but in a way that suggests they will not be able to be registered – and are therefor illegal.

If you’re caught in New York City (or state, we must assume) riding a hoverboard, you could be fined up to $500 USD.