The iPod dock by the name of XtremeMac Tango TRX has been out for some time now, having been first announced all the way back in 2010, but it’s no worse for wear with the 2011 holiday season rapidly approaching, and since we’ve never had a look at it before and there’s a brand new bit of functionality now with Google Music out of beta, let’s have a look, shall we? This device comes with several parts – first being the main speaker complete with iPod dock which can house anything from the tiniest iPod to the iPad 2, though I wouldn’t recommend the latter as it does block a bit of the sound blast and isn’t exactly held the most securely in place. Then there’s the bit that makes this whole thing unique: the second docking station, one that allows you to charge the device on one side of the house while the speaker jams music out at the other.

The whole setup here is a matte black with orange accents, and the build is nearly top quality in all places. Much of the outsides here in this set of items is plastic, this both proving to be good in that it’ll bounce back if you drop it and wont damage the floor of your dorm or apartment, and bad in that you won’t get many “oh sweet, what is THAT you’ve got there?” comments. No worries though, this speaker setup is high quality, working both in party-level sound blast loudness and silent tuning to perfection for your exacting musical tastes. To make these adjustments you’ve only to download the free application from the iTunes App Store (for iPod Touch, iPad, or iPhone), and fire it up, controlling the speaker either by docking your device or by connecting via Bluetooth. There’s also a tiny remote control included if you’re more apt to docking the iDevice and stepping back from the action with as small a controller as possible. 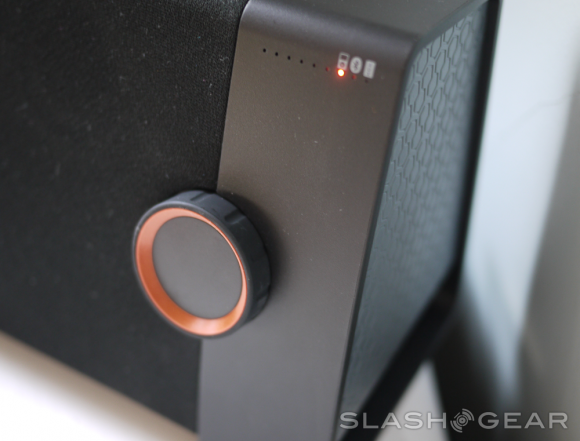 One of the comments Chris Davies made when this product was originally announced was that it was quite enticing in that it didn’t actually require you to dock your iDevice to make it play the beats you had controlled from said device. Truly this is a pro as should you be wanting to play your music in one part of the house and are walking to and fro putting away dishes or doing the laundry, you can stop anywhere, pop that iPhone out of your pocket, and flip to the next song. It’s a testament to XtremeMac that I’m fairly certainly I’ll not ever be able to give a mobile device dock a positive review in the future unless its got the ability to connect to the device in question via Bluetooth. Anything less is just uncivilized!

You can play any audio you’ve got ringing out of your iDevice through this speaker, so it shouldn’t come as a surprise that since Google Music recently left Beta and now allows everyone free storage of up to 200,000 songs on their own servers, we’d check out how to make it happen here. What we’ve got here is two options: first, you can access Google Music by heading to music.google.com in your web browser window on your iDevice and play some songs like that. Second, and this is the one demonstrated here in the video, is an app by the name of gMusic.

This app allows you essentially the same interface that your Android pals now have for Google Music and connects you instantly with all 200,000 of your songs just so long as you’ve got a Wi-fi connection (or simply a data connection if you’re using an iPhone, of course.) Tap into the fun and fire up a Weird Al track if you should so dare. You can pick this unit up today at Best Buy for a cool $100 USD, lucky you! 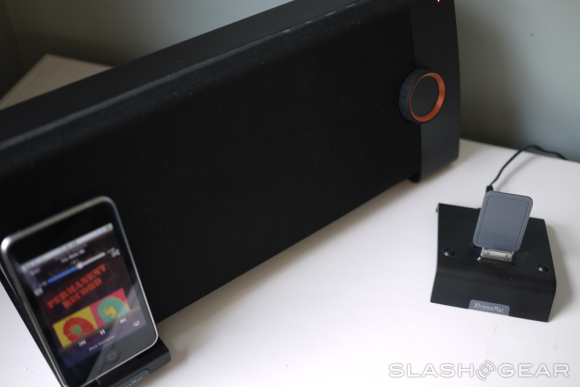