The folks responsible for the next generation in video game documentary-making have decided to start by digging a hole in the ground. If you’ll have been following along with Xbox One-exclusive video coverage over the past few weeks, you’ll know that a group of explorers are set to take their first episode of video game documentary madness to New Mexico, where they’ll be tasked with digging in the location where legend has it there’s booty to be found.

What booty, you might ask? Why, massive piles of a massive flop of a game, ET, the Extra-Terrestrial for Atari. This game was created for the Atari 2600 – aka the Atari VCS – back in 1982 after the film was released that same year. 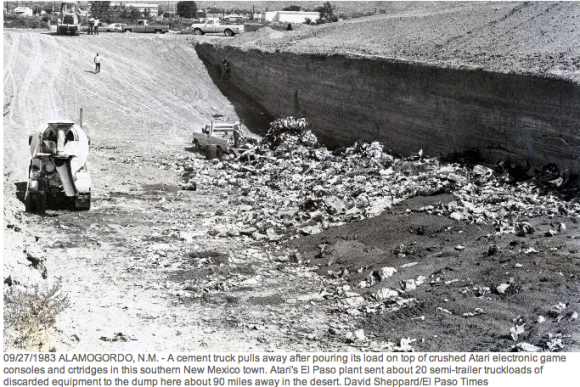 Designer Howard Scott Warshaw was given five and a half weeks to develop the game so that it’d be ready for the 1982 Christmas season. The game sold so terribly that Atari – due to massive overproduction and returns – buried millions of cartridges in an Alamogordo, New Mexico landfill.

Of course, there’s always the unnatural hazards included in digging up such a space.

“A 2004 study of the site found certain chemicals that exceeded federal thresholds.

Brian Cesar, Director of Public Works for the city of Alamogordo, said the chemicals found would not make a person “drop dead” but could be hazardous over a “very extended amount of time.” – John Bear, Alamogordo News

News this week is that the New Mexico Environmental Department has approved the excavation of the landfill. Lightbox Entertainment and Microsoft’s Xbox Entertainment Studios will be producing the show which will dig up the remains.