Wyze, the company that skyrocketed to popularity by launching a $20 home security camera, is back with yet another product: connected light bulbs. These bulbs are integrated with the Wyze app but do not require a separate hub; even better, they come with an $8 price tag, making them one of (if not the) cheapest connected bulbs on the market. As we’ve found with the three Wyze cameras and sensor system we’ve reviewed, the Wyze Bulb works flawlessly.

Wyze offers three home security products at this time: the cube-shaped Wyze Cam (currently in its second generation), the tower-shaped and motorized Wyze Cam Pan, and the Wyze Sense with contact and motion sensors. As we’ve noted in our Wyze Cam review and Wyze Cam Pan review, both camera products work very well, catapulting them to the top of the otherwise generally buggy and disappointing budget home security market. 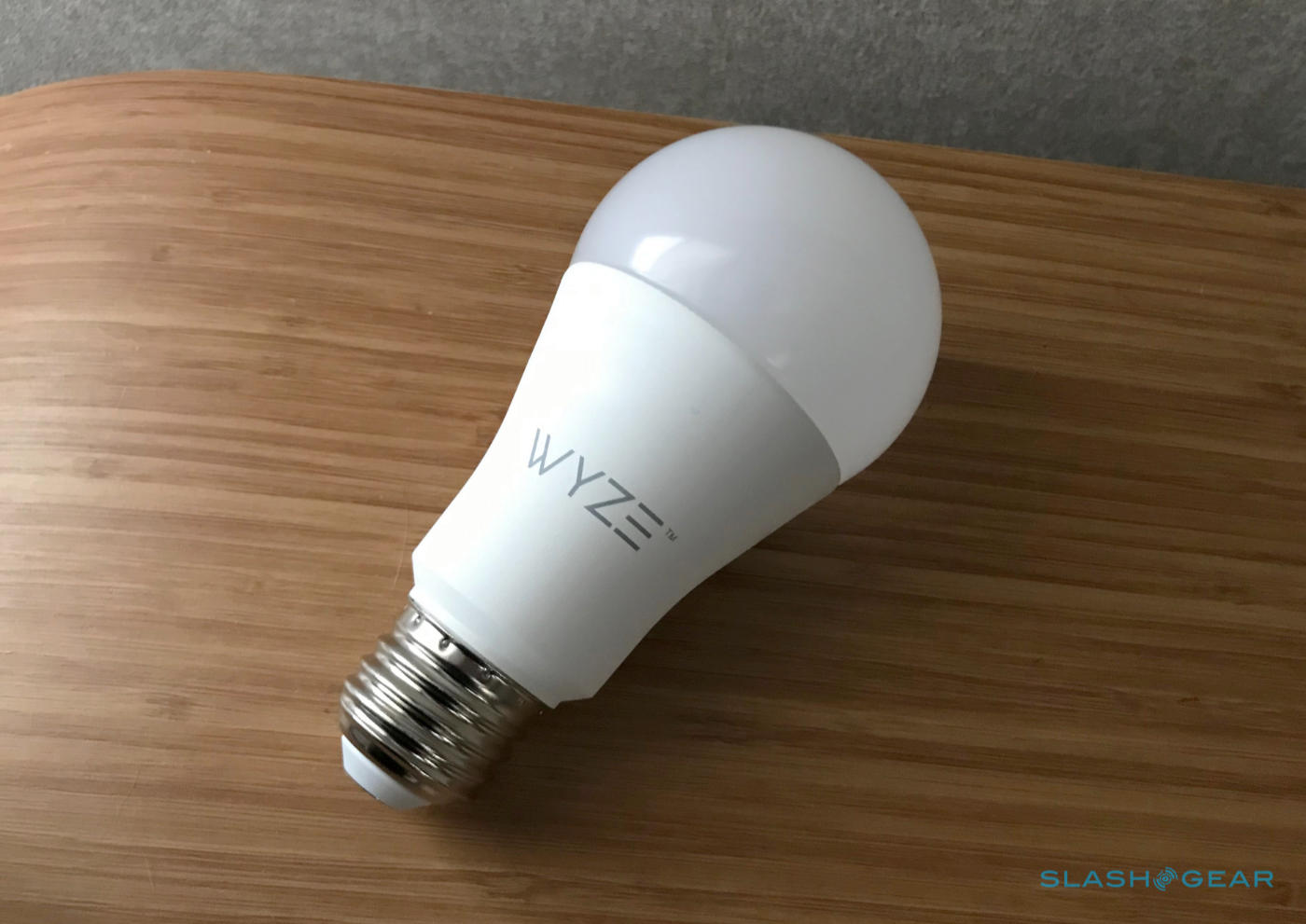 Wyze Bulb is an LED light bulb that connects to one’s home WiFi network to operate independently from a hub or base station. Each bulb is added as a new device within the Wyze app, where each bulb is listed with whatever name the user assigns to it.

The bulbs output 800 lumens, which is substantially bright, and though they turn on at a very cool white color, users can change them to warmer shades, including to a fully warm nearly orange hue. In addition, each bulb can be dimmed within the app, and though it doesn’t quite go dim enough to serve as a night light, the Wyze Bulb gets pretty close to it. 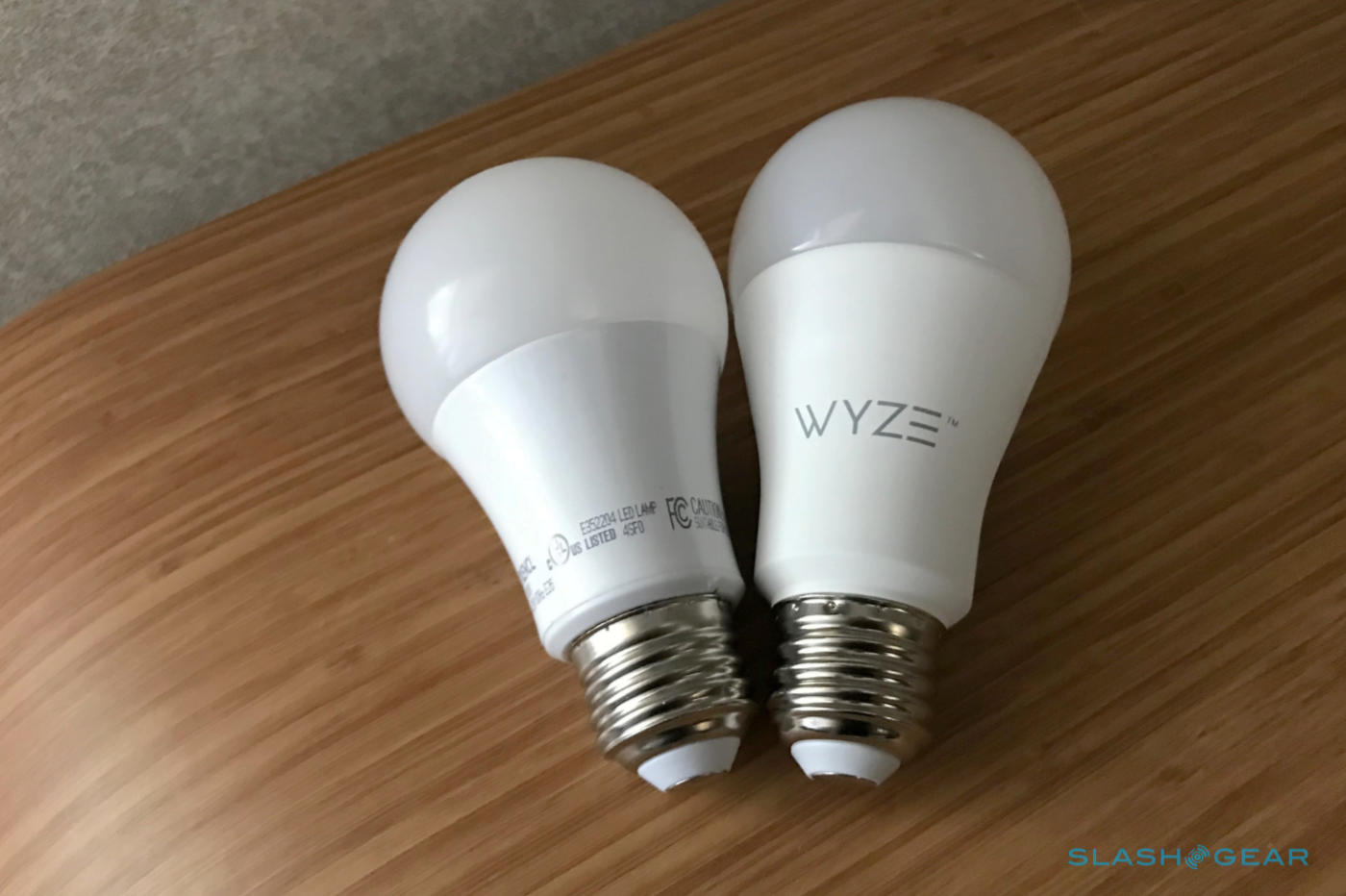 As shown above, the Wyze Bulb is nearly identical to the average inexpensive LED light bulb found in many hardware stores and through utility companies in the US. There are some notable differences, the big ‘WYZE’ logo aside, including a substantially heavier base in the connected bulb (due to the hardware inside), as well as a height that’s just a tad bit taller than the standard LED/incandescent bulb.

I tested the bulb in multiple lamps, including smaller side table lamps, and the larger size never proved problematic with small or narrow lampshades. When left running for hours, the Wyze Bulb’s base did get very warm, but no warmer than the base of the ordinary LED bulb featured above.

Setting up the bulb

Of all the Wyze products, the Wyze Bulb is officially the easiest to set up. Unlike some competing connected bulbs, which require a convoluted series of counting and pausing while toggling the light on and off in order to pair, the Wyze bulb enters pairing mode when clicked off and on three times in a row; it signifies its readiness to be paired by slowly flashing. 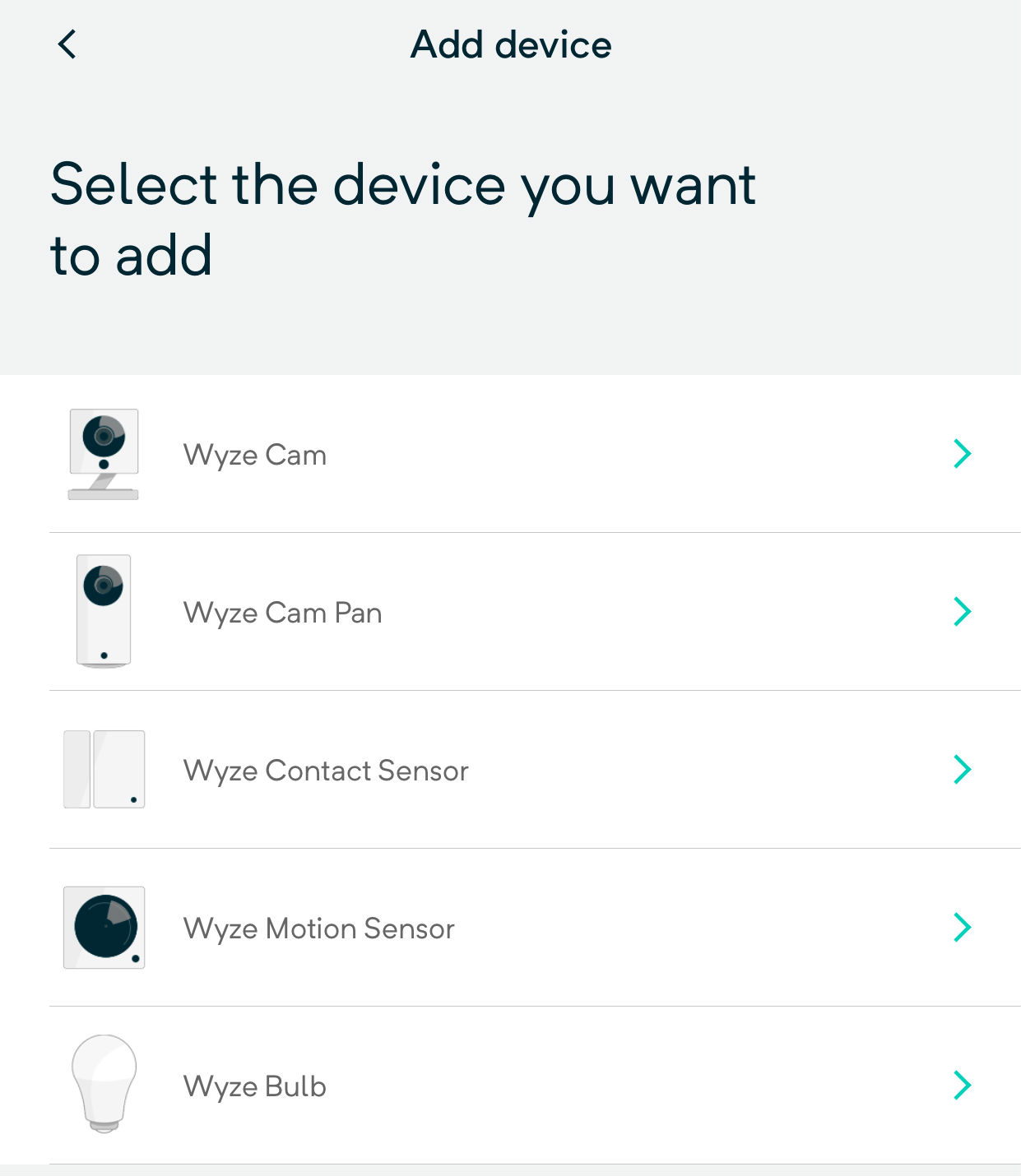 New Wyze customers will need to download the Wyze mobile app and create an account with the company; existing Wyze device owners can just open the app, tap the triple-dot menu button in the upper right-hand corner, then select ‘Add a Product.’ From the list of devices that can be added, tap ‘Wyze Bulb.’ 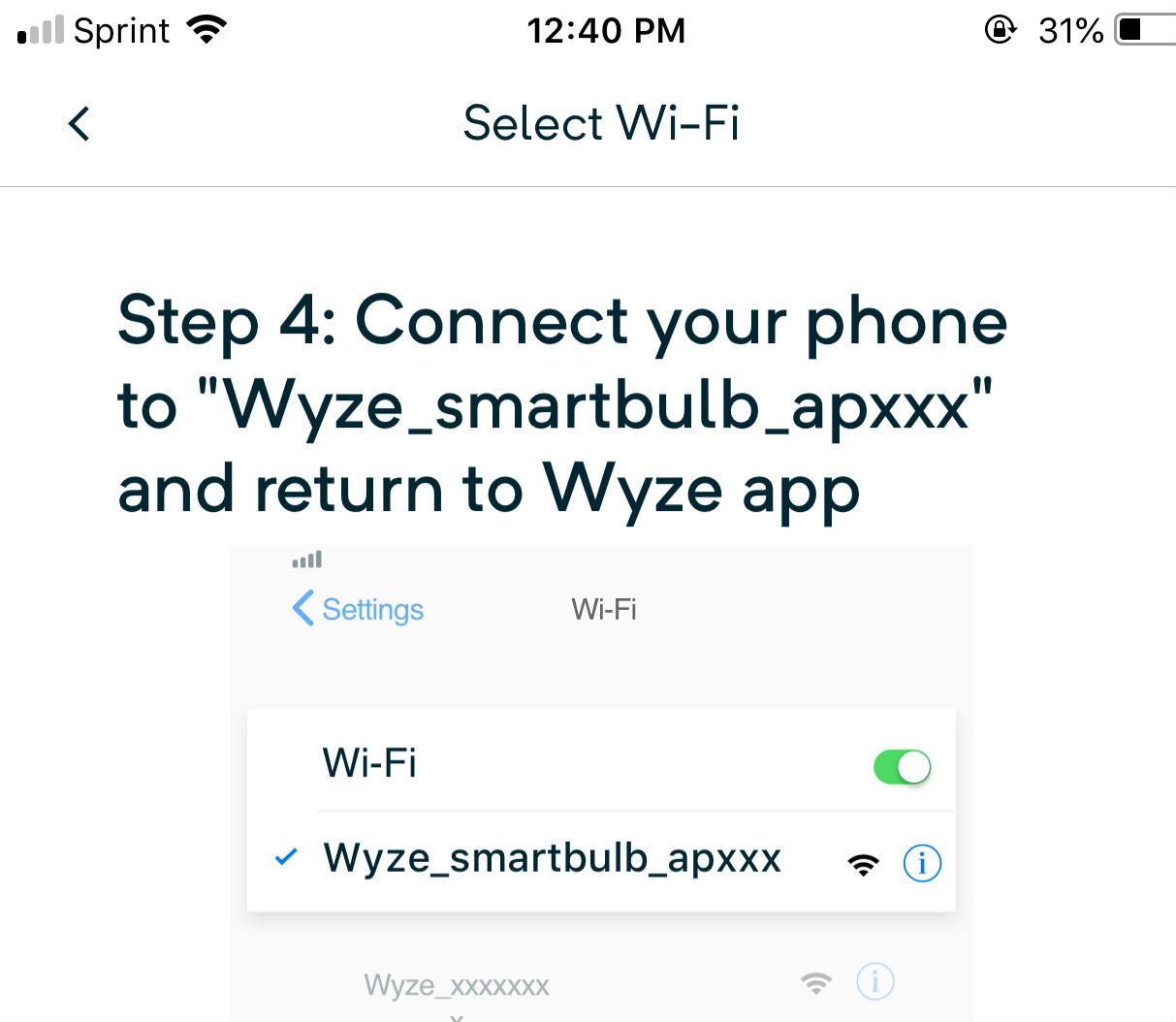 Because the Wyze Bulb connects directly to WiFi rather than to a hub, users will need to put the bulb into pairing mode by turning it off and then on again three times in a row. Once in pairing mode, users connect their phone to the WiFi network broadcast by the bulb, then connect to their own home WiFi network. It takes up to 150 seconds for the bulb to connect to the same home WiFi network, after which point users can choose a name for the bulb in order to distinguish it from other bulbs in the app. 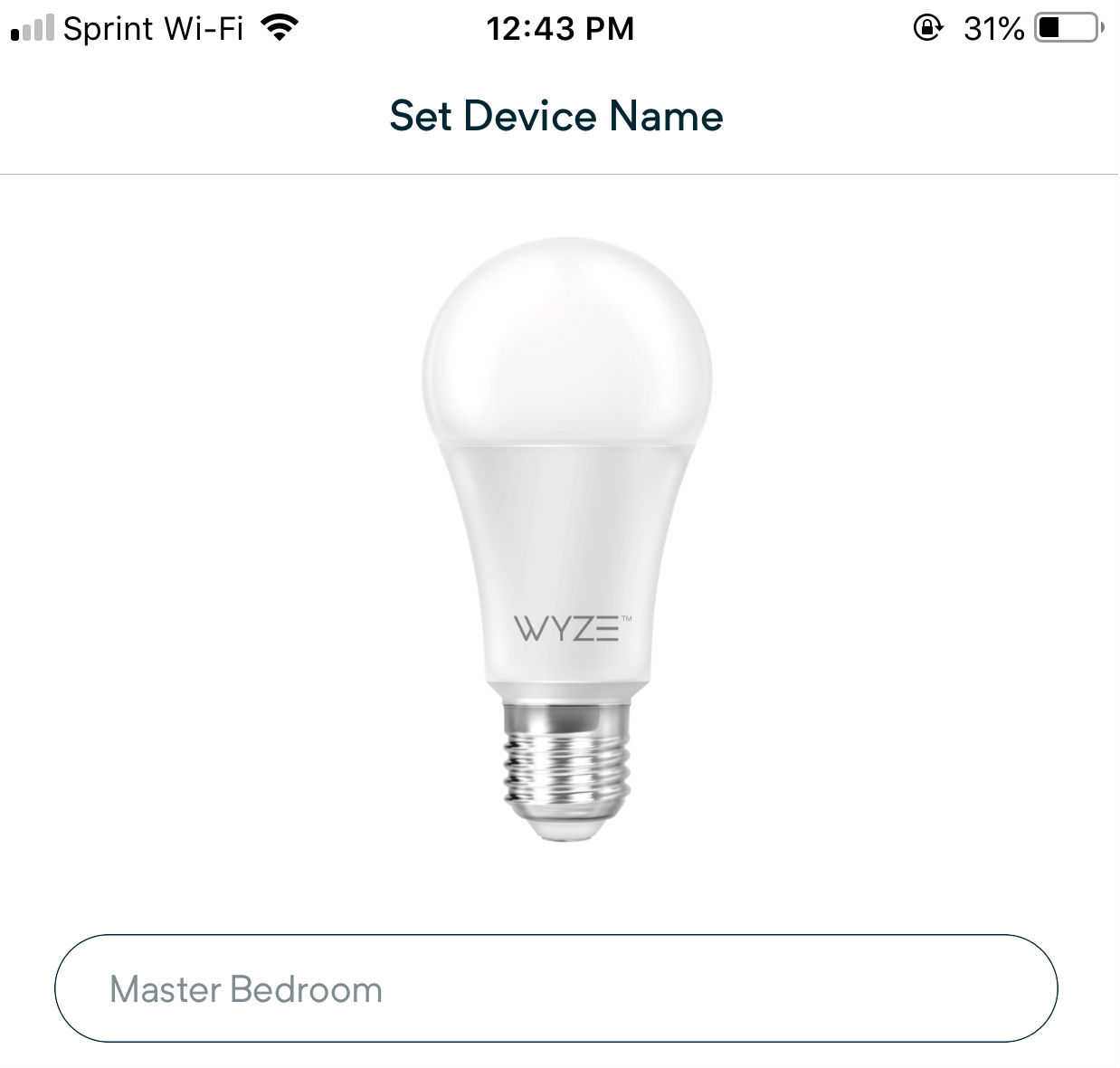 The setup process worked perfectly the first time for each of the four bulbs I added to the network. The entire process per bulb required around two minutes of setup time.

Once connected, users have two ways to control the Wyze Bulb: with the Wyze app, which is the primary method, and with the Google Home app, assuming you set it up with Google Home. 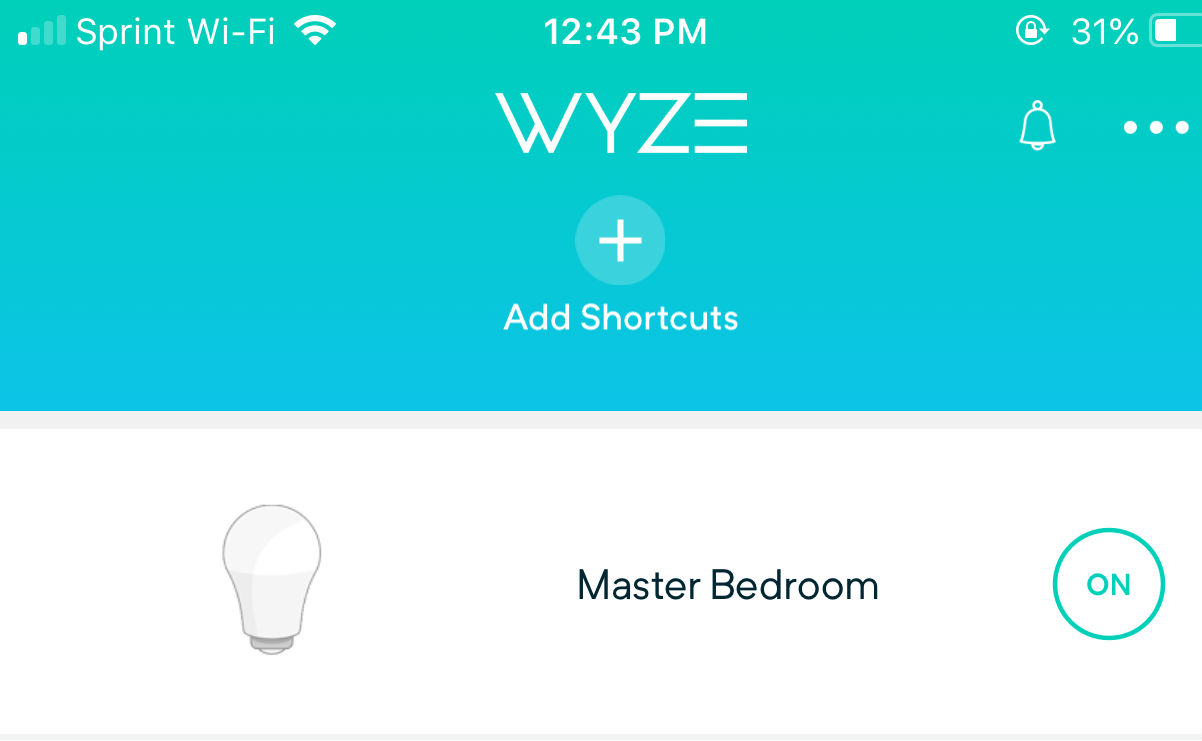 Looking first at the Wyze app, users will find the bulb listed with its name in the app’s main devices screen. There’s a shortcut for directly shutting the light on and off with a tap, but users can more precisely control the light by tapping the device, then manually adjusting brightness and warmth sliders.

As the screenshot below shows, it’s also possible to create three settings shortcuts that Wyze calls ‘Scenes’ by positioning the brightness and warmth sliders where you want them, then tapping the ‘Scene’ circle below the sliders. You’ll be prompted to give the shortcut a name, such as ‘Reading’ when you’ve selected the settings you find ideal for reading. 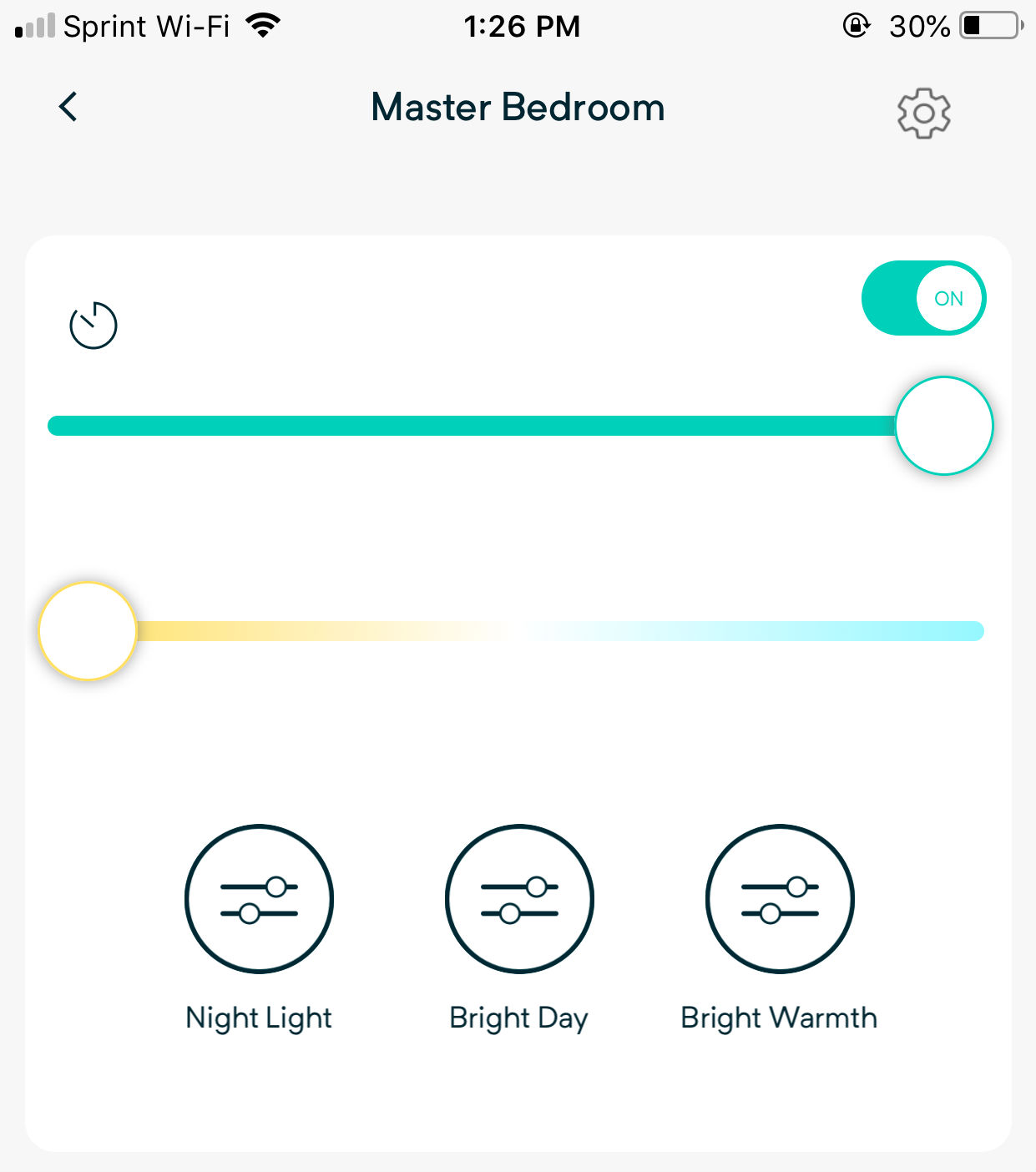 Keeping in line with the company’s home security products, the Wyze Bulb also features a Vacation Mode, which turns the light off and on at different times when you’re away to simulate the presence of someone in the home. This is the modern equivalent of using a light timer to keep burglars away. 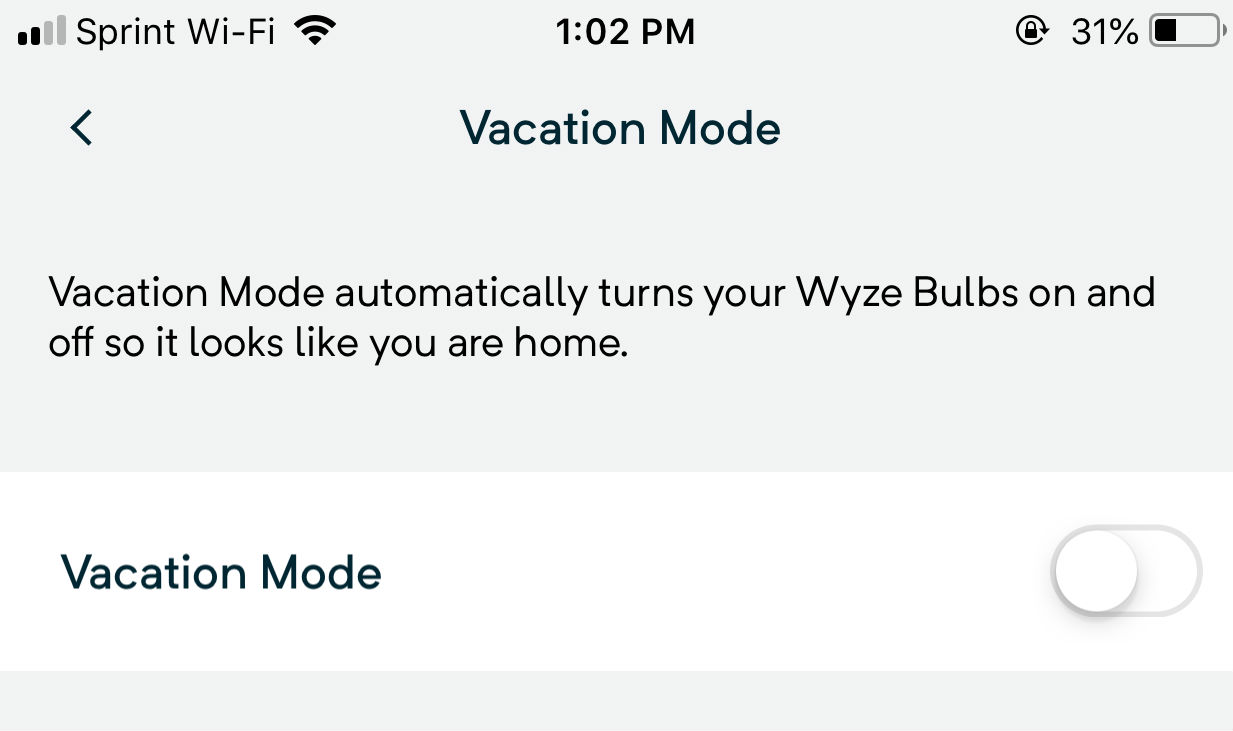 As with the newer Wyze security cameras, the Wyze Bulb supports Google Assistant, which means users can also control the device using the Google Home app. Whereas the Wyze app has ‘Scenes,’ the Google Home app has ‘Routines,’ which enable users to include smart lights as part of the morning, bedtime, and other routines. The ‘Bedtime’ routine can be set up to automatically turn off all the lights when it’s time for bed, for example, and that includes Wyze bulbs. 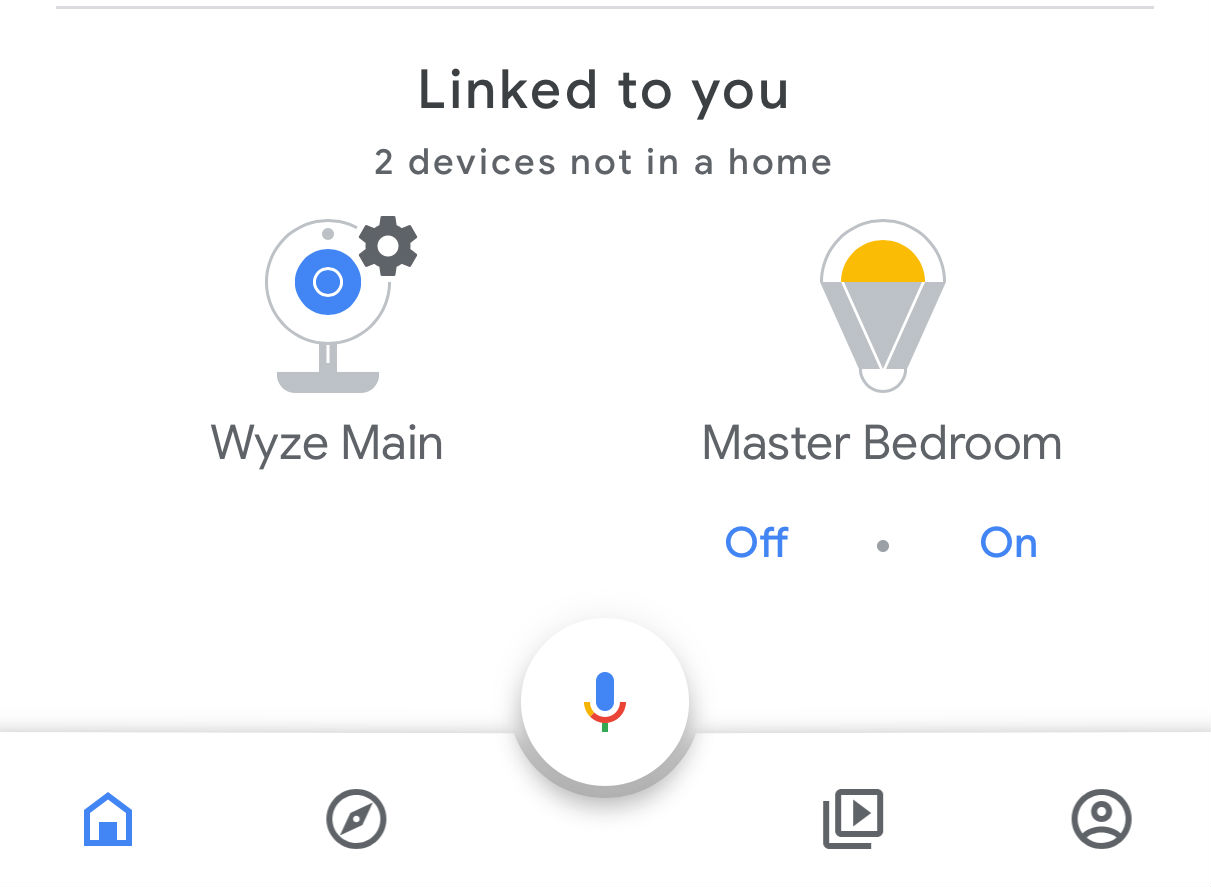 In addition, Google Home speakers and any third-party speakers with Google Assistant support can be used to control Wyze bulbs using voice commands, including the dimming feature. Users can, for example, say, “Hey Google, set the [light bulb name] to 10%’ to dim the light without pulling out a phone and launching the app.

Support for Google Assistant cements the Wyze Bulb’s position in the smart home lighting industry, underscoring it as a product that can hold its own against bigger names in the market, doing so at an exceedingly cheap rate. The bulb likewise supports Amazon Alexa, but we had trouble getting the app to discover the assistant after enabling the Wyze skill.

Wyze has established itself as a budget home security company that offers quality products and its new Wyze Bulb product confirms that nothing about that has changed. The connected light worked at all points of the setup and usage process, doing exactly what you’d expect it to without any of the frustration typical of budget-tier IoT systems.