Wyze, the company with incredibly inexpensive security cameras, has launched Wyze Sense, its first motion sensor system designed for home use. The Wyze Sense kit is now available to purchase following its brief pre-order period, giving consumers a small motion sensor and two contact sensors to complement their existing Wyze Cam and/or Wyze Cam Pan security cameras. Should Wyze Cam owners spend another twenty bucks to pick up the kit? The answer is a resounding yes.

The Wyze system: A primer

The new Wyze Sense motion sensor system works with the existing Wyze Cam and Wyze Cam Pan security cameras, which are sold separately for $20 USD and $30 USD, respectively. The Wyze Sense product, which also retails for $20, includes hardware for a single camera, as well as a single motion sensor and two contact sensors.

Wyze Sense is as simple as a home security system can be; it takes literally minutes to install and setup. Users plug a small USB bridge into the back of a Wyze security camera’s USB-A port. The component slots into the camera’s recessed rear panel to sit flush with the back of the camera, enabling it to retain its cube (or rectangular) shape.

Beyond the USB component, Wyze Sense includes two contact sensors that can be placed on doors, drawers, or windows to issue alerts when the contact is broken. The sensors are simple adhesive-backed squares that take only a second or two to apply; the only requirement is a flat surface upon which to stick the squares, as well as a seam that is slim enough for contact in the “closed” position. 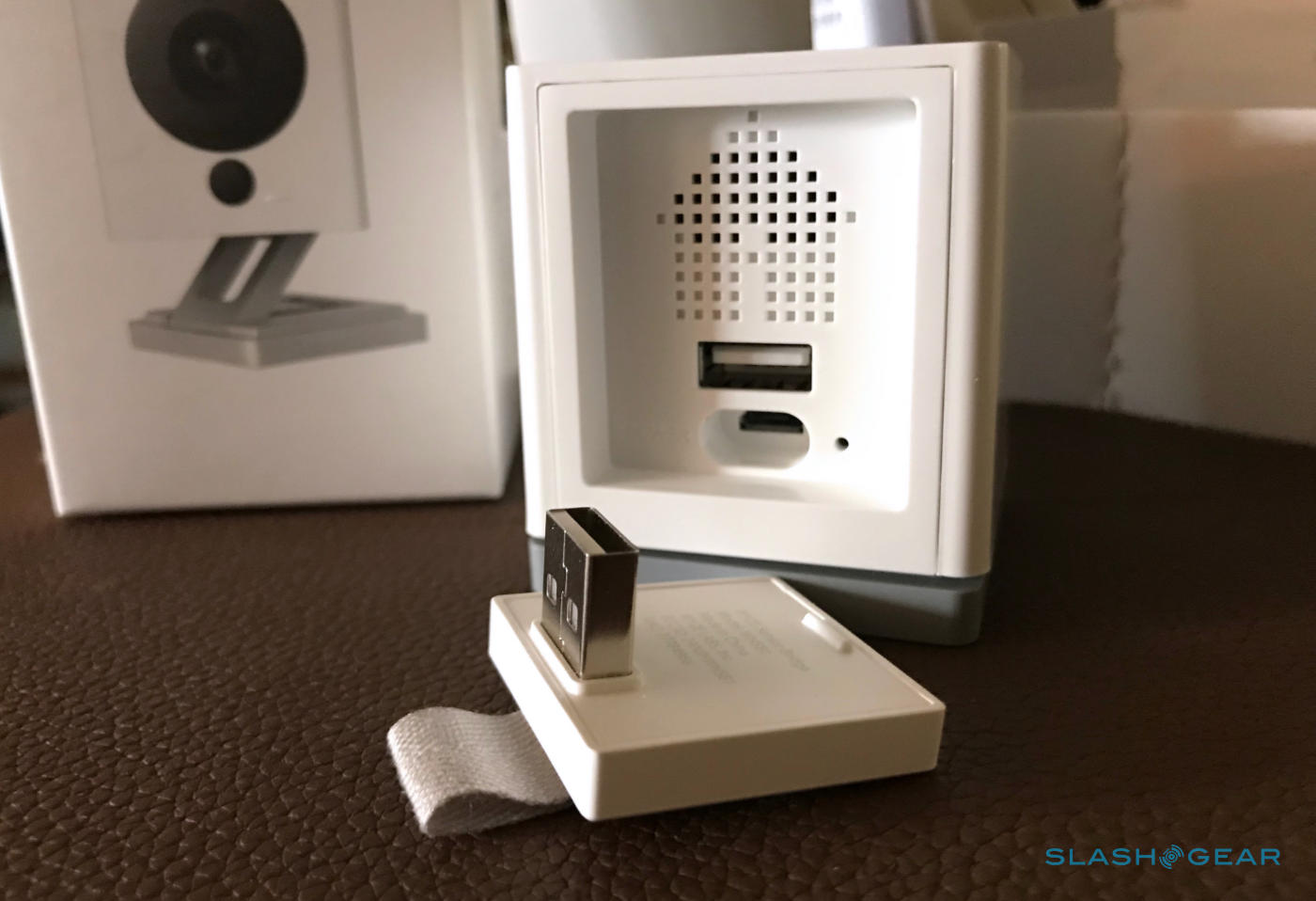 The final component is this kit is the motion sensor, which is a small square-shaped device with a dark, rounded, protruding lens. The device’s function is obvious: the piece monitors the nearby area and issues alerts to the camera and mobile app when movement is detected. As part of this process, the camera starts recording when motion is detected.

There’s a certain obvious appeal in the Wyze system, and that’s that cost. A single Wyze camera costs $20 (unless you want the rotating model) and the new Wyze Sense system costs the same $20. Combined, buyers are able to get an overall excellent home security system for a total of $40. This low price point makes Wyze particularly attractive for consumers in need of cameras and sensors for multiple rooms or floors. 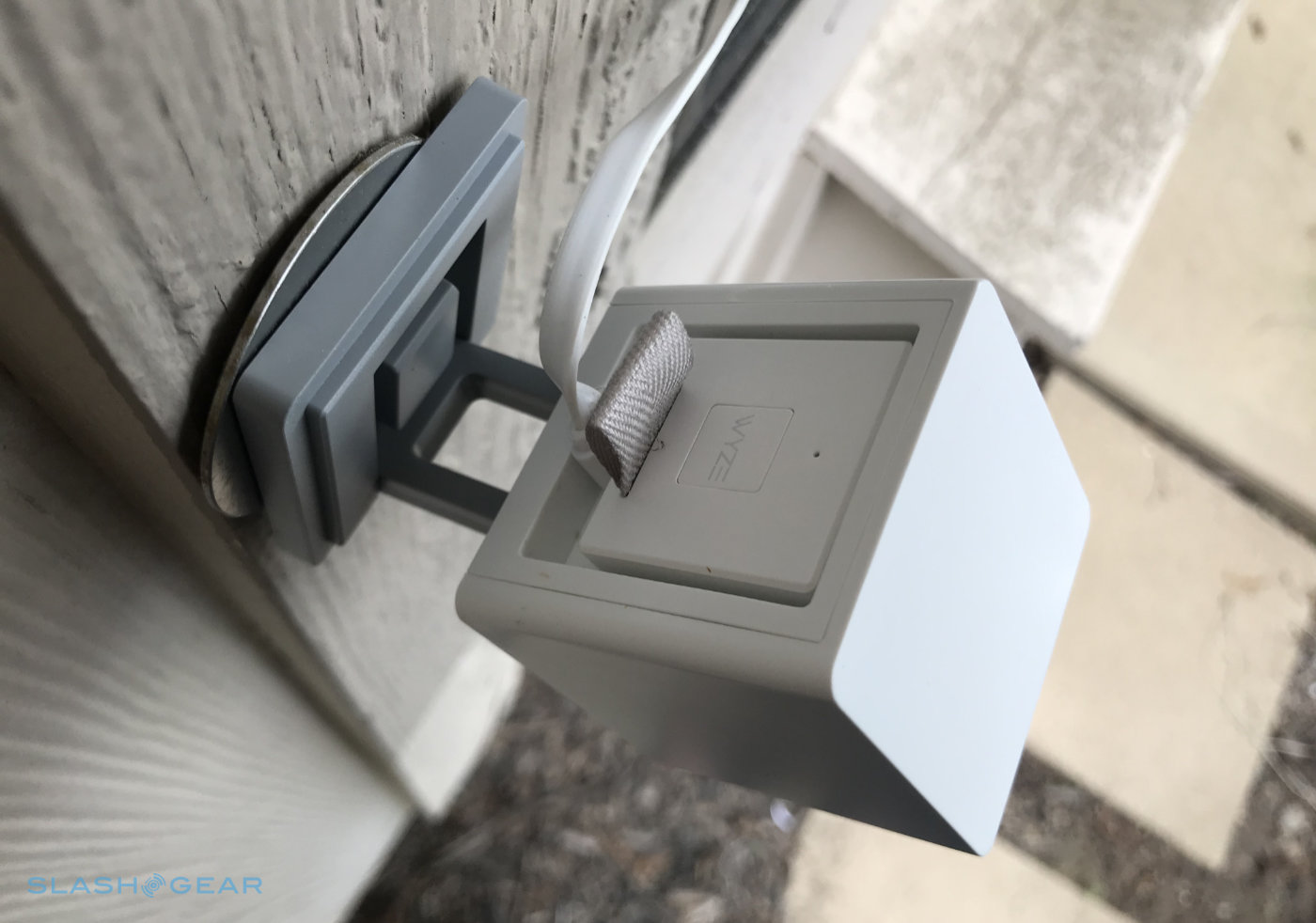 Outfitting first, second, and third floors of one’s home with the Wyze Cam and Sense systems would cost $120 (three cameras + three sensor kits), which is cheaper than a single Nest Cam. The appeal is there, but most importantly, so is the functionality.

As we’ve noted in our Wyze Cam and Cam Pan reviews, the company’s security camera and mobile app are both excellent for general home surveillance — everything works as it should, there are some advanced features like monitoring specific zones, and cloud storage is free.

Setting up Wyze Sense is very simple, as detailed in the company’s official setup guide. The first step is launching the Wyze camera app and making sure the security camera’s firmware is up-to-date (you’ll be prompted in-app if an update is available). Assuming it is updated and connected, pop the Sense bridge (USB component) into the back of the camera and wait for the blue light to appear. 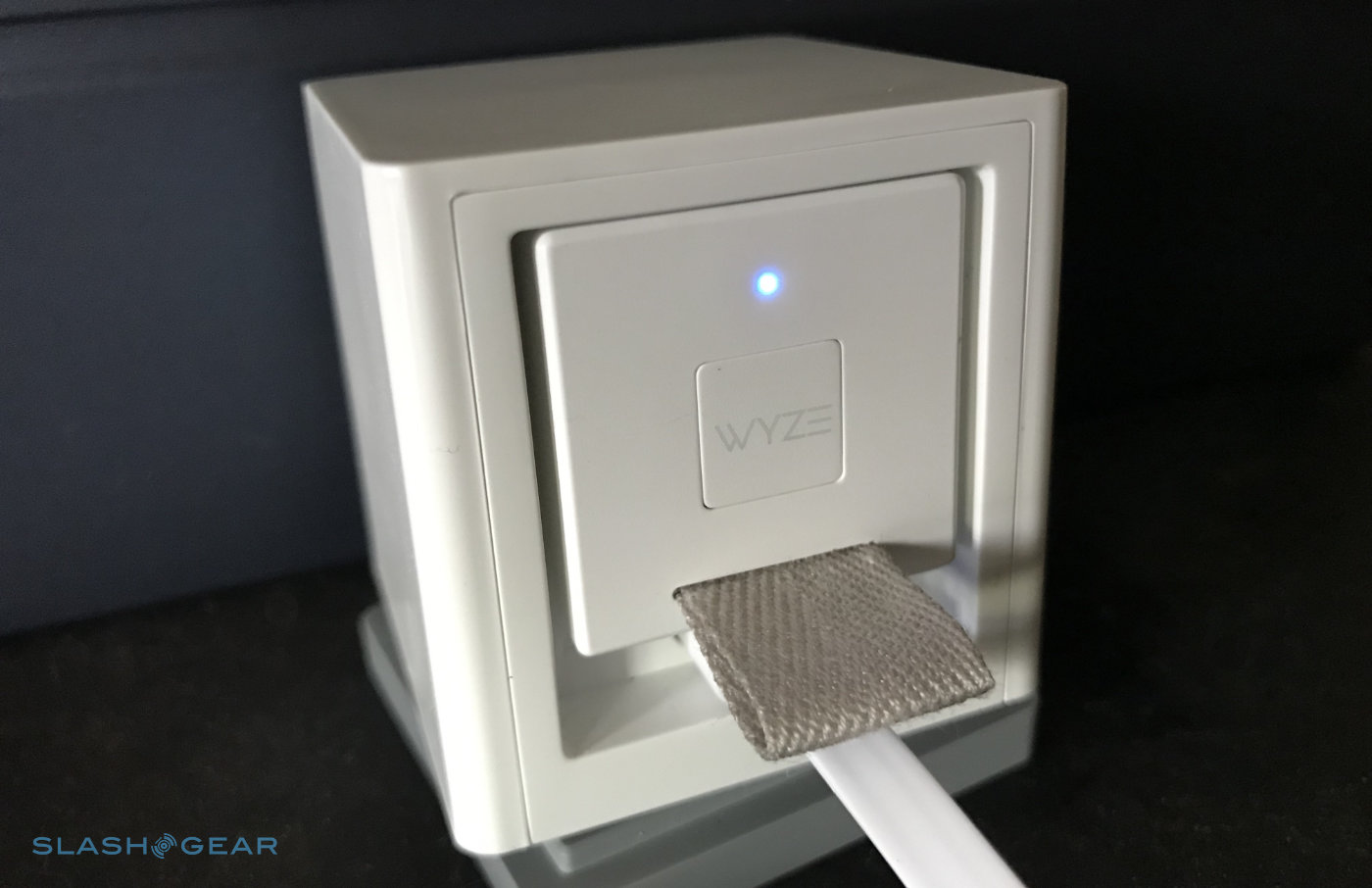 Once the blue light is present, the bridge is paired with the camera and that part of the setup process is complete. The motion and contact sensors must be manually added within the Wyze app as new devices, which is essentially the same process used when setting up a new camera for the first time.

There’s also the key aspect of placing the sensors around your home (or wherever you’d monitoring). A contact sensor placed on a door, for example, can be used to keep track of when that door is opened and trigger recording from a nearby Wyze camera. This can be useful for the home’s entryways to ensure uninvited guests are captured on video.

The motion sensor is self-explanatory — it can be added in any location where movement should trigger video recording. There are uses beyond security; parents could place the motion sensor near a crib to get alerts when a toddler wakes up from their nap, for example.

The contact sensor is fairly small, comparable in size to a couple LEGO bricks placed alongside each other. The sensor is square-shaped when each of the two components are in contact with each other (they’re magnetic). Adhesive on the back of both pieces allows users to stick them onto just about any surface, as long as it’s not too porous or uneven — I successfully placed them on a door with wood grooves and they had no problem sticking. 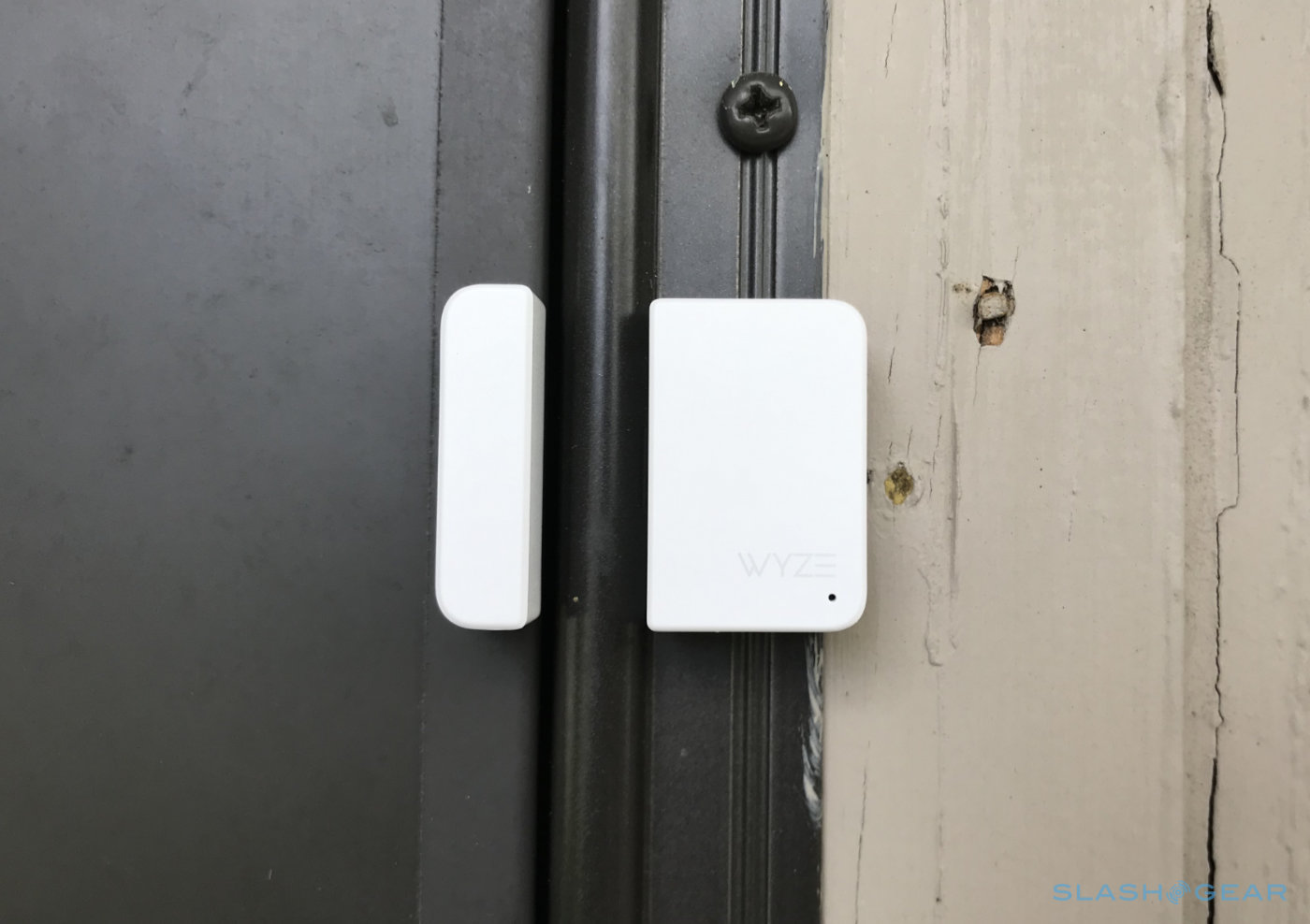 Few doors, drawers, and similar spaces have perfect seams, and so the odds are high you’ll have a gap between the two sensor components. Based on our tests, each half can be spaced around 1-inch apart before they lose contact with each other. A small LED indicator on the larger half of the contact sensor blinks to show when contact is made and when it is lost. 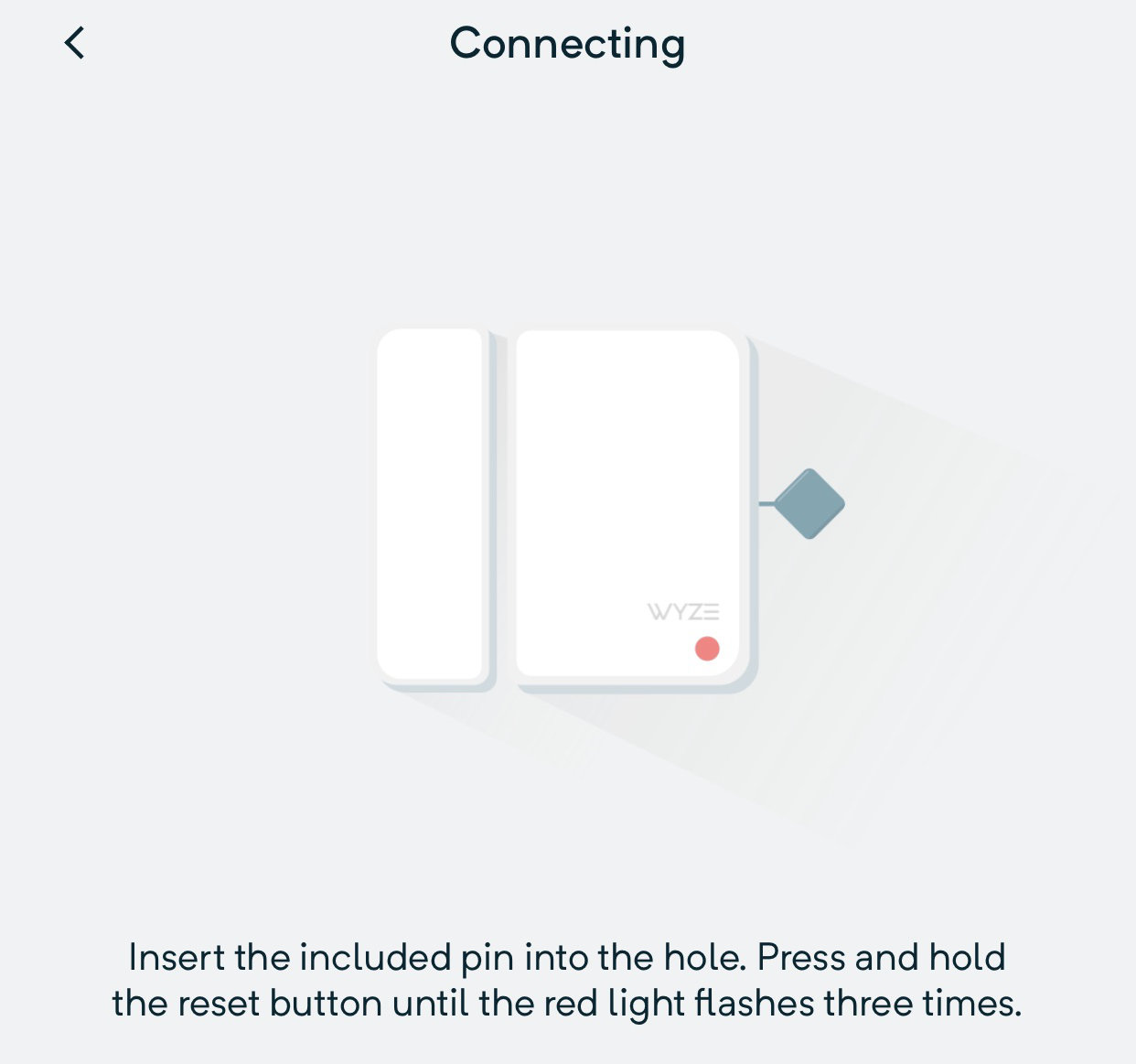 Contact sensors are added to the system by pressing a small pin key (it is essentially a sim lock tray remover) into a small hole on the sensor. The pin presses a button in the contact sensor, prompting it to blink three times. After the blinking ends, the pin can be removed and the app will add the sensor to the existing system. 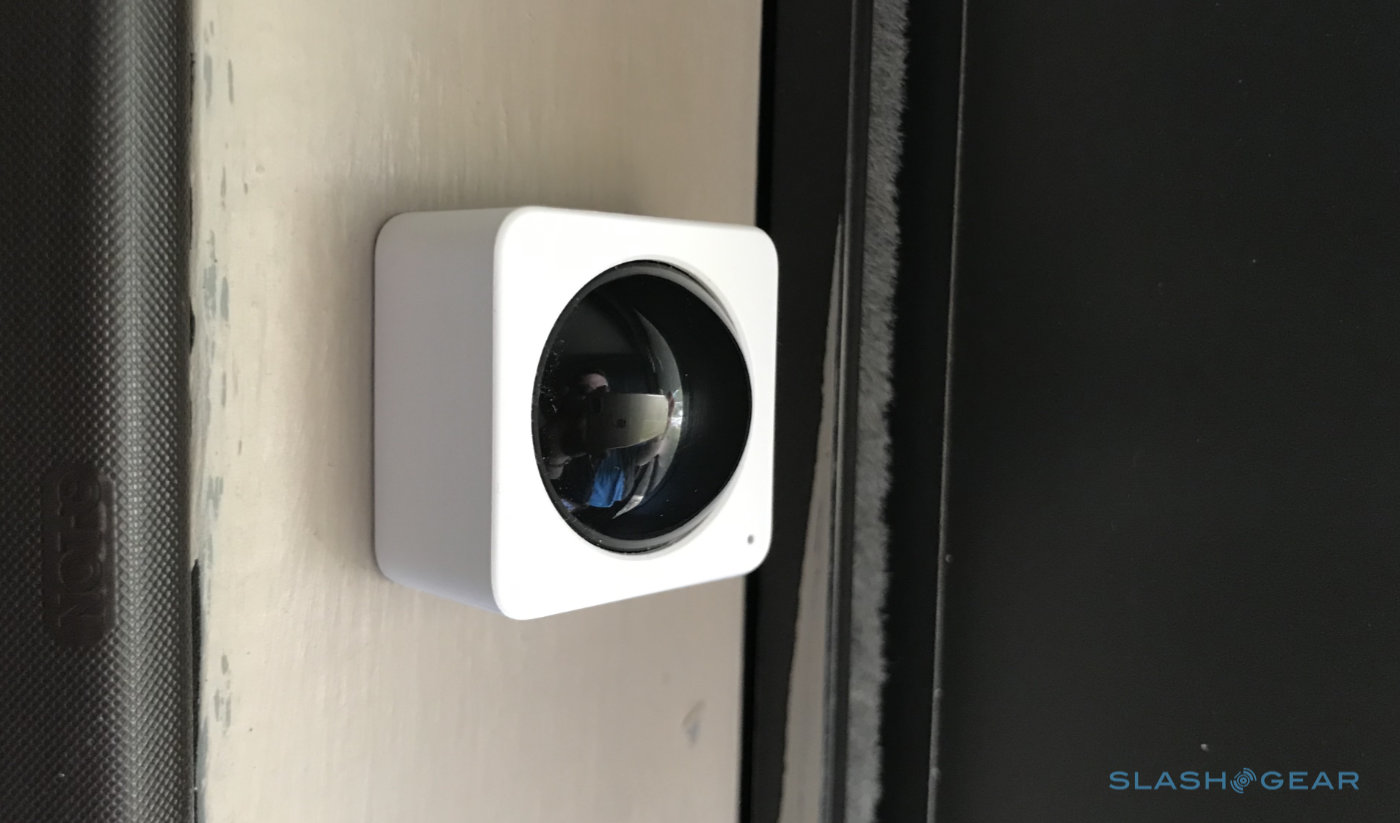 The motion sensor is added to the overall Wyze system in exactly the same way as the contact sensor — there’s a small hole in which to insert the pin. The app finds and adds the sensor within seconds. Adhesive backing enables users to stick the sensor just about anywhere, though the component’s cube shape also makes it possible to lie it flat on a surface facing upward or rest it on a shelf.

It’s hard to appreciate just how fantastic the Wyze software is until you’ve tried a few other ultra-cheap home security products. Even in cases where the hardware is decent, many of these cheap products ship with horrible, buggy software that is difficult to use and that rarely works as intended. This is not the case with Wyze — the company’s app has worked perfectly for the months I’ve used it, and the addition of Wyze Sense products hasn’t changed that. 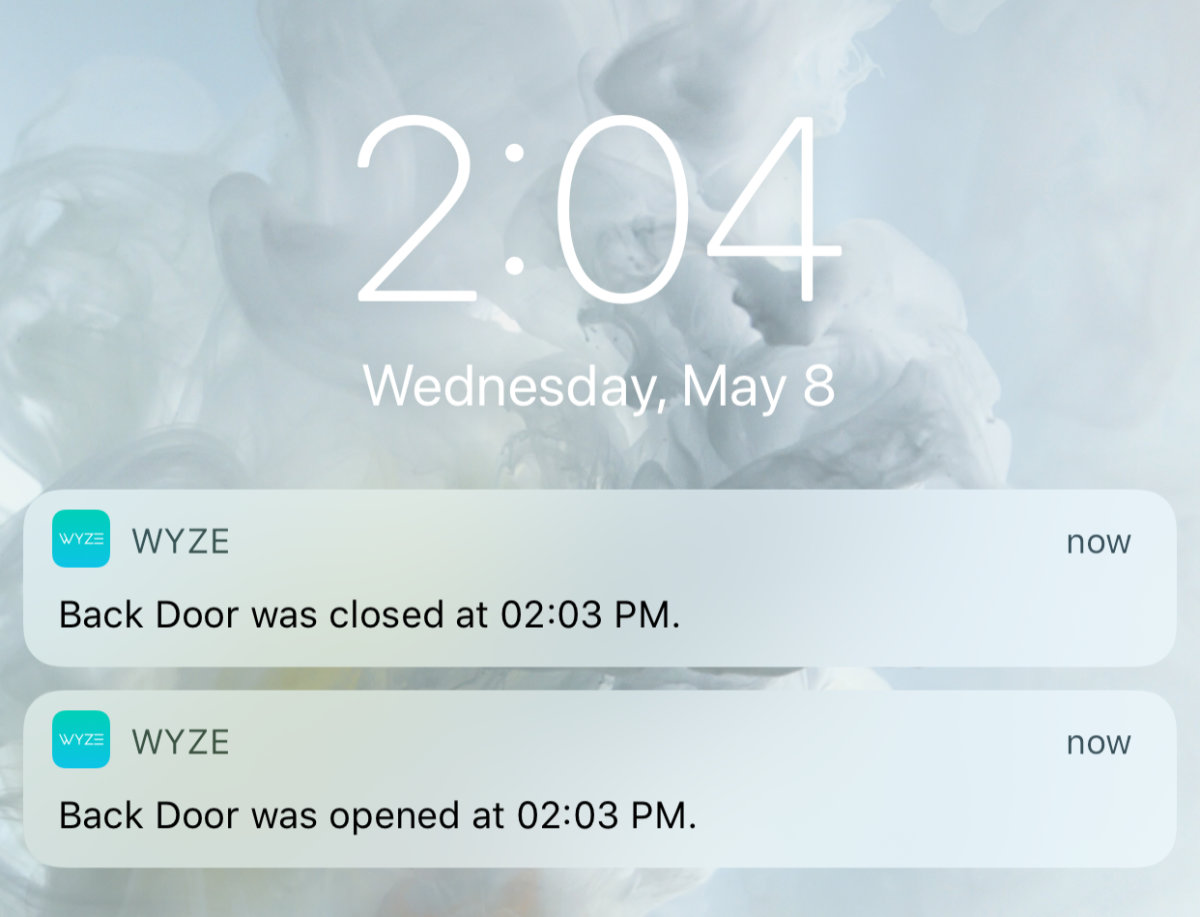 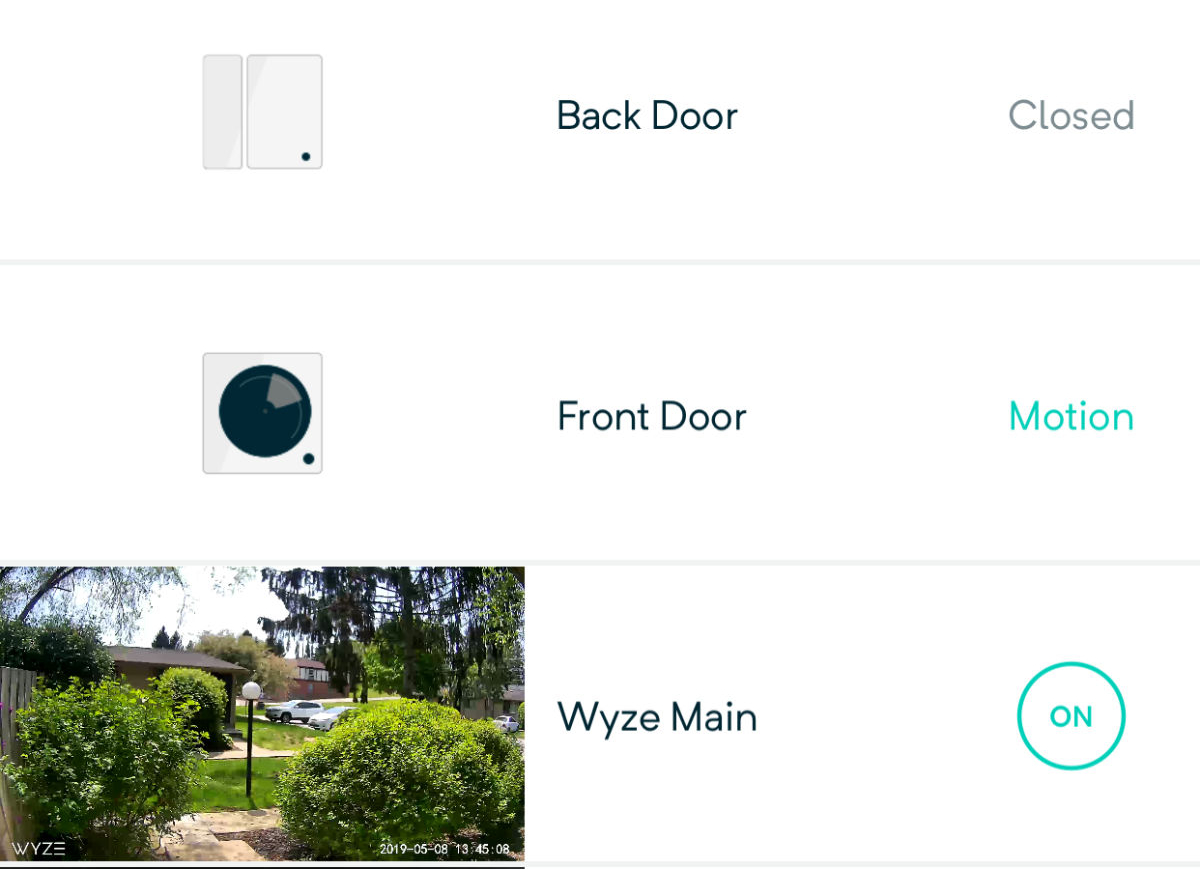 In addition to push alerts, the Wyze app offers a snapshot of the Wyze Sense sensors’ statuses, namely whether the contact sensors are closed and if there is motion detected by the motion sensor. Tapping any sensor in the app pulls up a list of events associated only with that sensor — so, for example, if you wanted to see whether someone got into the fridge in the middle of the night, you can retrieve the log with events linked to the contact sensor on the refrigerator. The same is true for the motion sensor. 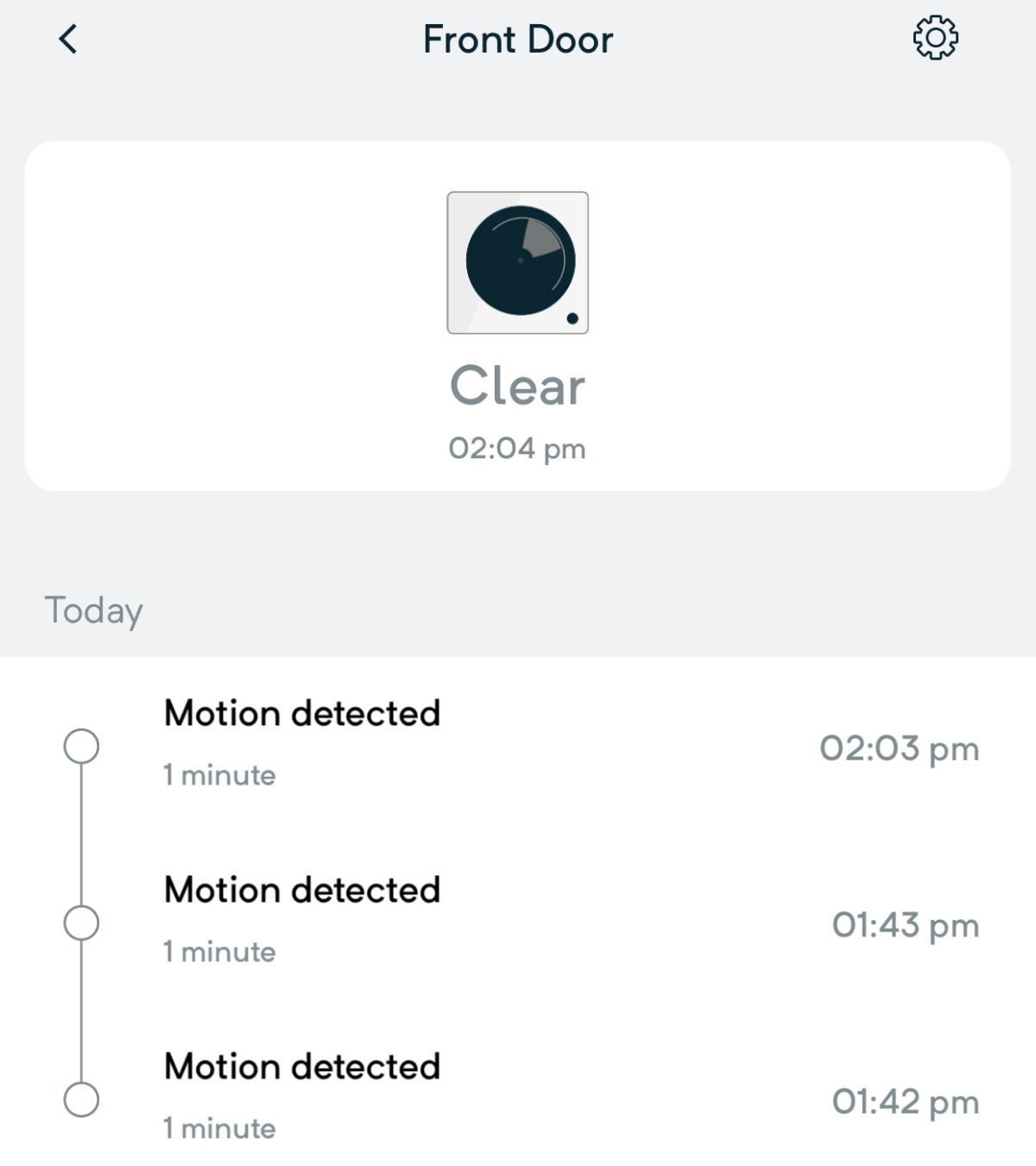 The app has worked perfectly over several days of testing; there has never been a single instance of false alerts, issues connecting with the hardware, or software bugs. 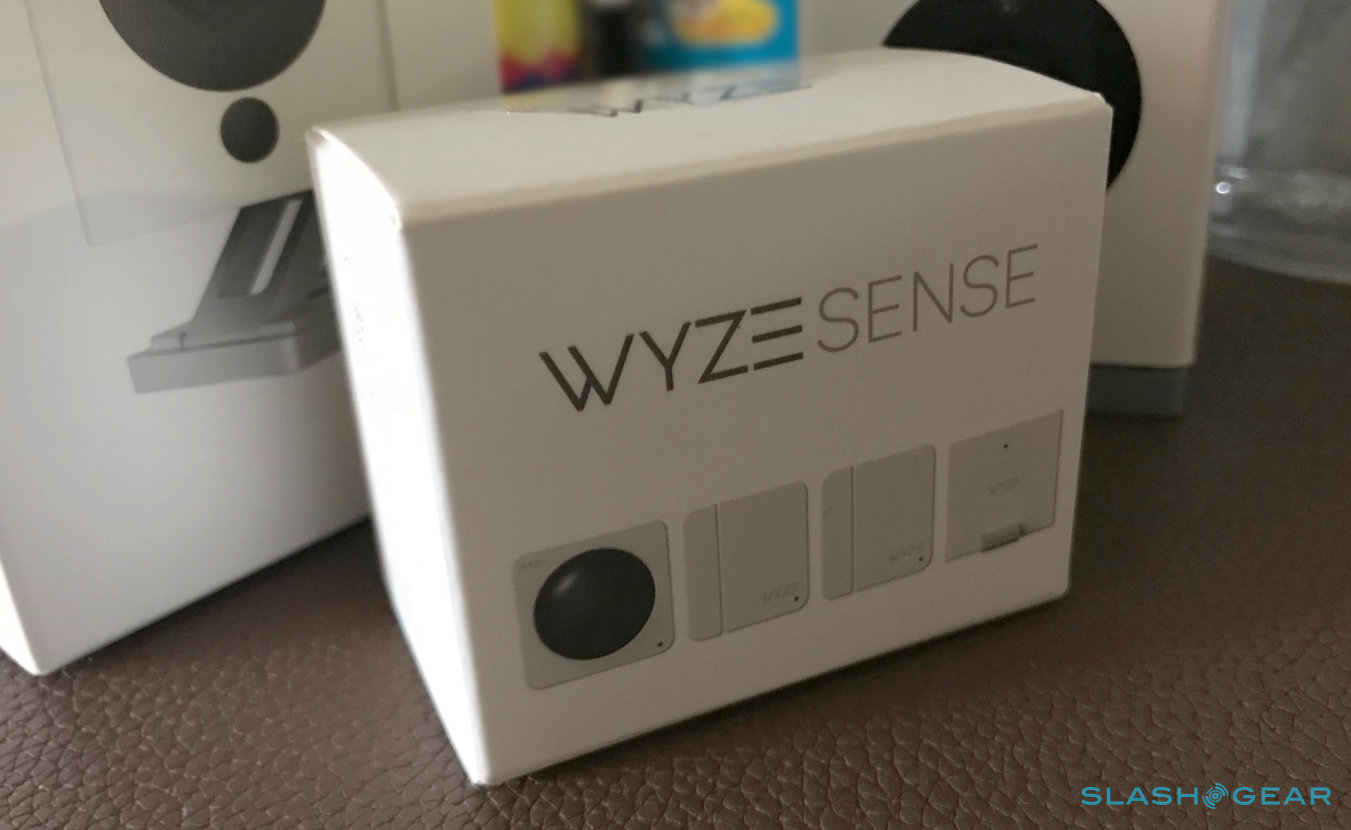 It’s hard to appreciate just how fantastic the Wyze system is until you’ve tried it yourself. No other inexpensive home security product has impressed me as thoroughly as the Wyze system, which is better than ever with the arrival of Wyze Sense. The hardware offers a quality level for which you’d expect to pay more than $20, the software works flawlessly, and the entire system can be setup and installed within minutes.