Samsung has confirmed that the Galaxy Note 10.1, the company’s 10.1-inch pen-enabled Android tablet, will go on sale globally this month, with an LTE version following on later in 2012. The slate, announced back at Mobile World Congress in February, will initially be offered in WiFi-only and HSPA+ forms, each with a 1.4GHz quadcore processor, Android 4.0 Ice Cream Sandwich, and support for Samsung’s new Learning Hub with stylus-aware education tools. However, the company also expects the Note 10.1 to be popular in business and among artists.

That’s because of the accurate S Pen Samsung uses, which differs from existing capacitive styli by using an active Wacom digitizer for precise digital inking. The performance has seen a boost since the original Galaxy Note “phablet”, and Samsung will preload Adobe Photoshop Touch as well as its S Note app.

In fact, S Note – or any other app – can be set to load automatically when the S Pen is removed from its silo in the body of the slate. There’s also support for split-screen use, keeping two apps visible simultaneously; Samsung expects that to be useful for those wanting to browse the web and watch video, as well as for digital notetaking when the ability to clip screenshots and grab sections of text to the digital notebook could be handy.

Samsung’s Learning Hub, meanwhile, is currently available in Korea, the UK, France, Germany, Spain, Italy, China and Singapore, with Samsung promising more availability soon. The US will get the Samsung Media hub, meanwhile. 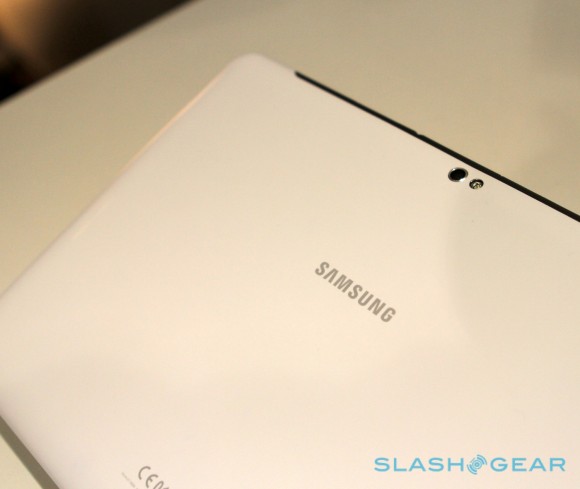 Other hardware includes a 5-megapixel main camera and 1.9-megapixel front camera, 2GB of RAM, a choice of 16, 32 or 64GB of storage (with a microSD slot), and a 7,000 mAh battery. There’s also WiFi a/b/g/n (2.4/5GHz), Bluetooth 4.0 with apt-X high-quality audio, USB 2.0 Host, MHL-HDMI output and even an IR transmitter for using the slate as a universal remote. The usual sensors – accelerometer, digital compass, light and gyroscope – are onboard, along with S-GPS on the WiFi model and A-GPS on the 3G version.