One of the biggest things that Microsoft has been singing about in Windows 10 is the universal app platform, a utopia where apps written for one device factor will also be usable on others, give or take a few tweaks. Part of that promise is realized in Continuum for Phones, which saw the light of day in the high-end Lumia 950 and Lumia 950 XL. Now, however, Microsoft is lowering the requirements for Continuum for Phones just a wee bit, embracing mid-range devices running on a Qualcomm Snapdragon 617.

The previous minimum requirements for a device to support the Continuum for Phones feature included using either a Snapdragon 808 or Snapdragon 810, Qualcomm’s highest end mobile chips. That, of course, covered the two new Lumia flagships.

But to have even better reach, Microsoft has added the MSM8692 or Snapdragon 617. The chip was announced September last year as the company’s higher mid-range chipset, with eight 64-bit cores running at 1.5 GHz max, and Adreno 405 graphics chip and new Quick Charge 3.0.

It’s a subtle change in requirements that could potentially see Continuum, one of Windows 10’s biggest strengths, adopted more. As it stands, at the very minimum, a smartphone would need at least a Snapdragon 617, 2 GB of RAM, 16 GB of storage, and a 720p screen to be eligible. That describes the most common configuration for myriads of mid-range devices. That opens the doors for more OEMs to adopt Windows 10 Mobile. 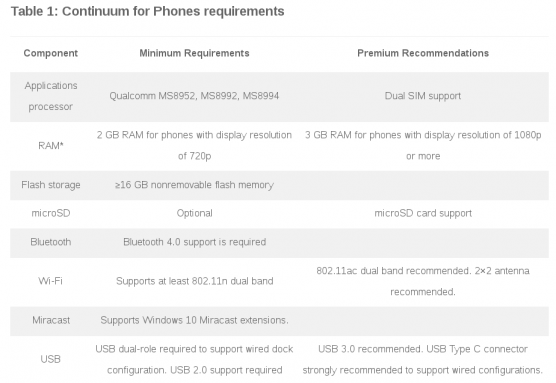 That, of course, will depend on how much OEMs are will to invest in Microsoft’s latest mobile platform. While adoption of Windows 10 itself has been high, Windows 10 Mobile outside Microsoft’s own Lumia line hasn’t exactly been on fire, with few other OEMs jumping aboard Microsoft’s train.